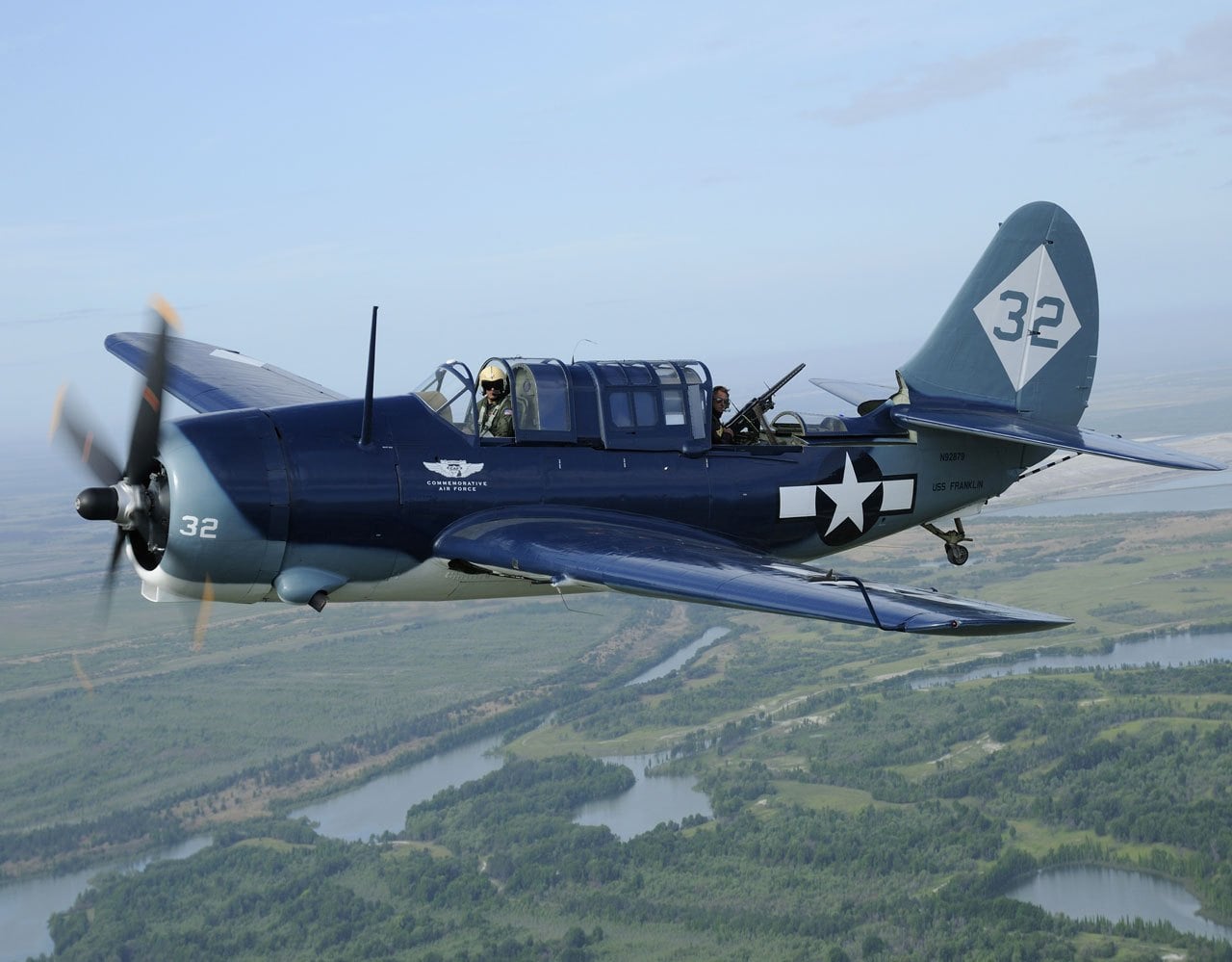 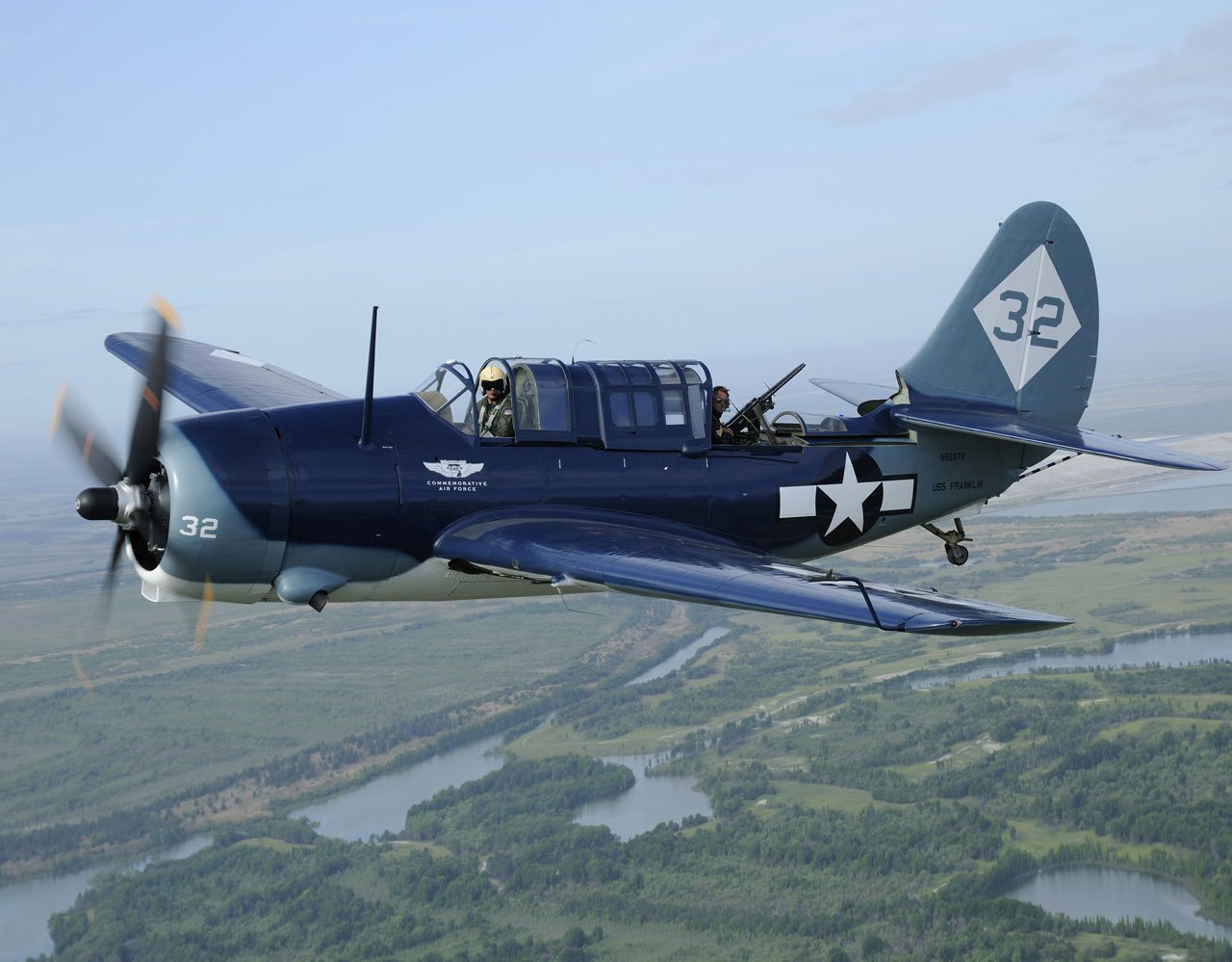 Carrier-based scout CURTISS SB2C HELLDIVER. In early 1938, the Bureau of Aeronautics of the U.S. Navy has developed the conditions of tender for the construction of a new deck of ramedica-bomber engine Right XR-2600 Cyclone. The dimensions of this plane involved the simultaneous placement of two such devices on the platform size 14,6×12,2 m samoletostroenie carrier. This requirement was most difficult to meet. Binding was considered as mechanisms for folding wings on the deck and the landing gear in flight.

Even before the official announcement of the competition, several firms have already started to develop aircraft for this project.
The time allocated to the competition — until December 1938, completed only four of the six participating firms. Four projects were selected only two companies Curtiss and Bruster, who was designated as the XSB2C (firm Curtiss) and XSB2A (company Bruster).
Both projects involved the use of a new engine that met the minimum conditions of competition, and the car had a lot in common: all-metal construction, folding up the wings, a large bomb Bay, retractable landing gear in flight and flaps. The Navy chose the Curtiss aircraft company, the geometric dimensions of which allow the main condition of the competition is to place two aircraft on the lift.
XSB2C outwardly resembled the previous design of the company, in particular biplane SBC Helldiver, and, in fact, the new machine was its deep modernization. This is what determined the range of complex issues that are decided by the designers. For the transition to the monoplane scheme had to pay for the increase in wing loading and peretyagina design, to the same old layout, the tail section did not allow to place there guns to protect the rear hemisphere. On the solution of these problems, the engineers under the leadership of Raymond C. Blaylock worked throughout the design phase.
The contract to build the advanced aircraft fleet was made with the Curtiss firm in may 1939. The contract involved the static test and demonstration flights of the prototypes. At the end of may, the special Committee approved the layout of the prototype. However, the purchaser has required the design of additional changes relating to wing-mounted weapons and the aft machine gun.
During the tests, full-scale mockup in the wind tunnel it was found that the maximum lifting force is much less than estimated. With the aim of achieving the estimated parameters had to increase the wing area from 35,767 to 39,205 m2 and change its structure. Then it turned out that the dive speed is slightly higher than the estimated. The problem is solved by the installation of the trailing edge of the wing brake flaps, which were used on landing.
Test pilot Lloyd Childs 18 December 1940 and made its first flight on an experimental machine ХЅВ2С2С-1 (serial number 1758) from the airport in Buffalo, new York. Tests in air revealed numerous construction defects. The plane was very difficult to pilot. A curious case occurred on 9 February 1941, during takeoff from the prototype plane took off… the engine. After amplification of the attachment of the engine testing continued. Another surprise, the plane was presented may 10: when landing, he came off the left wheel. The reason was found very quickly — fatigue material.
During testing, there were a lot of changes to the engine cooling system. In August 1941, to improve the static stability of the engine on the aircraft was moved to 305 mm forward. Prototype ХЅВ2С2С-1 flew on November 12 at the airport in Port Columbus to military trials, where on December 21 when performing a dive from a height of 6706 meters due to exceeding max of the plane ripped right console wing and stabilizer. The prototype has completely collapsed and was beyond repair. The pilot miraculously managed to leave the car unattended and be saved. This incident has delayed flight testing for another six months.
Oddly enough, accidents and failures almost no effect on the fate of the order. The fleet was looking forward to supply 370 aircraft under the first contract, signed in 1940 under the new defense program. Assembly line for the XSB2C-1 was ready in December 1941. Paced Assembly production aircraft — 85 cars a month.
The Japanese attack on pearl Harbor on December 7, 1941, have given more importance to the programme of issue XSB2C highlighting its priority. The first production SB2C-1 (No. 00001) collected in June. This machine had significant differences from the prototype. Designers redesigned the wing, replaced the sight in the cabin arrow mounted two 7.62 mm machine guns (instead of one 12.7-mm), mounted search radar ASB. To increase the survivability of the cockpit is covered with armor and fuel tanks made Proektirovanie.
The first flight of the serial HELLDIVER (“Hell dive bomber”) made on 30 June 1942. In August, rolled off the second serial instance (No. 00002). In early September, they both flew to the air base in Anacostia, where he continued testing of the power plant. In October, the aircraft No. 00002 flew to the air base NAF in Philadelphia, where he began test flights from the deck of an aircraft carrier. At the same time at the air base in Norfolk in the plane No. 00004 were tested missile and bomb armament. On the third serial of the Curtiss SB2C HELLDIVER had a hydraulic system of the brake flaps. Later it was used on 201 series aircraft along with new 20-mm cannon mounted in each wing instead of two 12.7 mm machine guns. Instance No. 00006 were tested in the interests of the air force at Wright field. At No. 00007 air force base in Anacostia tested radio and electrical equipment. In the instance of No. 00008 passed speed tests at Norfolk, and No. 00013 determined the possibility of arming torpedoes. Carrier-based reconnaissance and bombers. 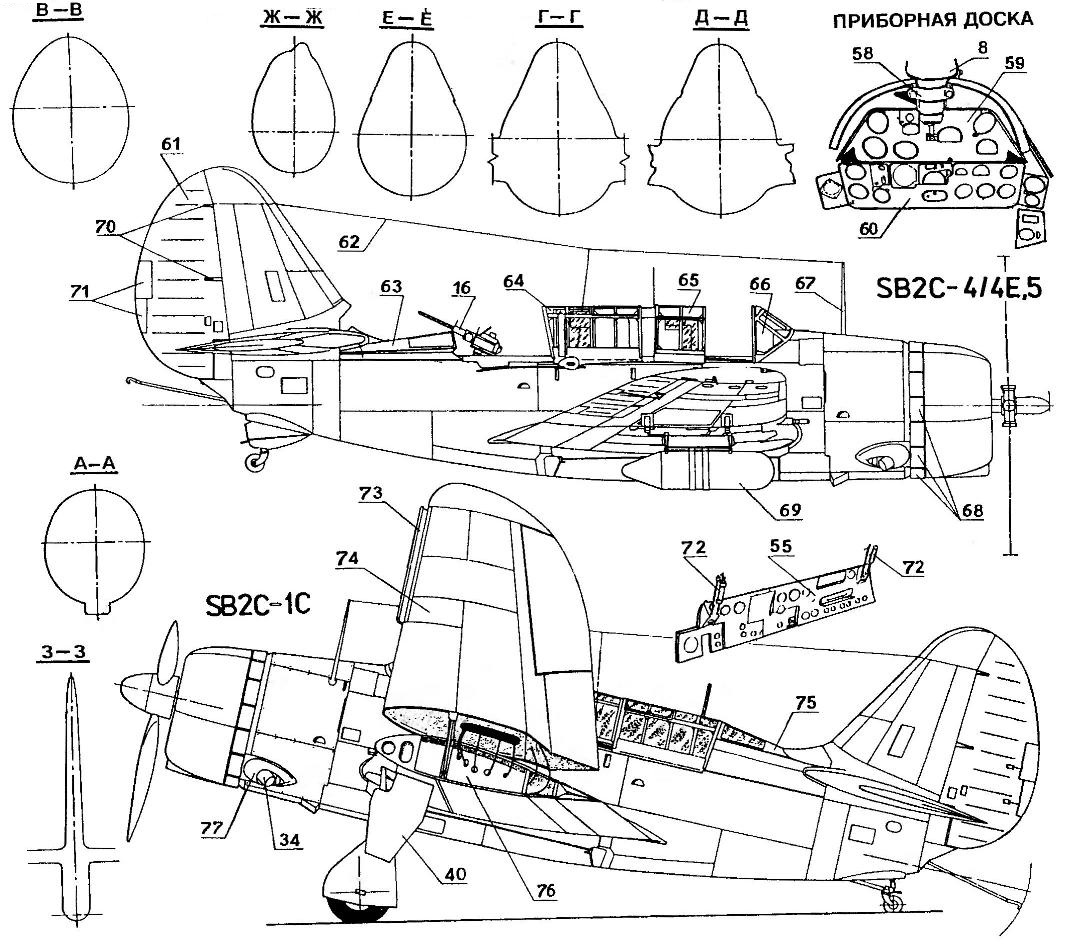 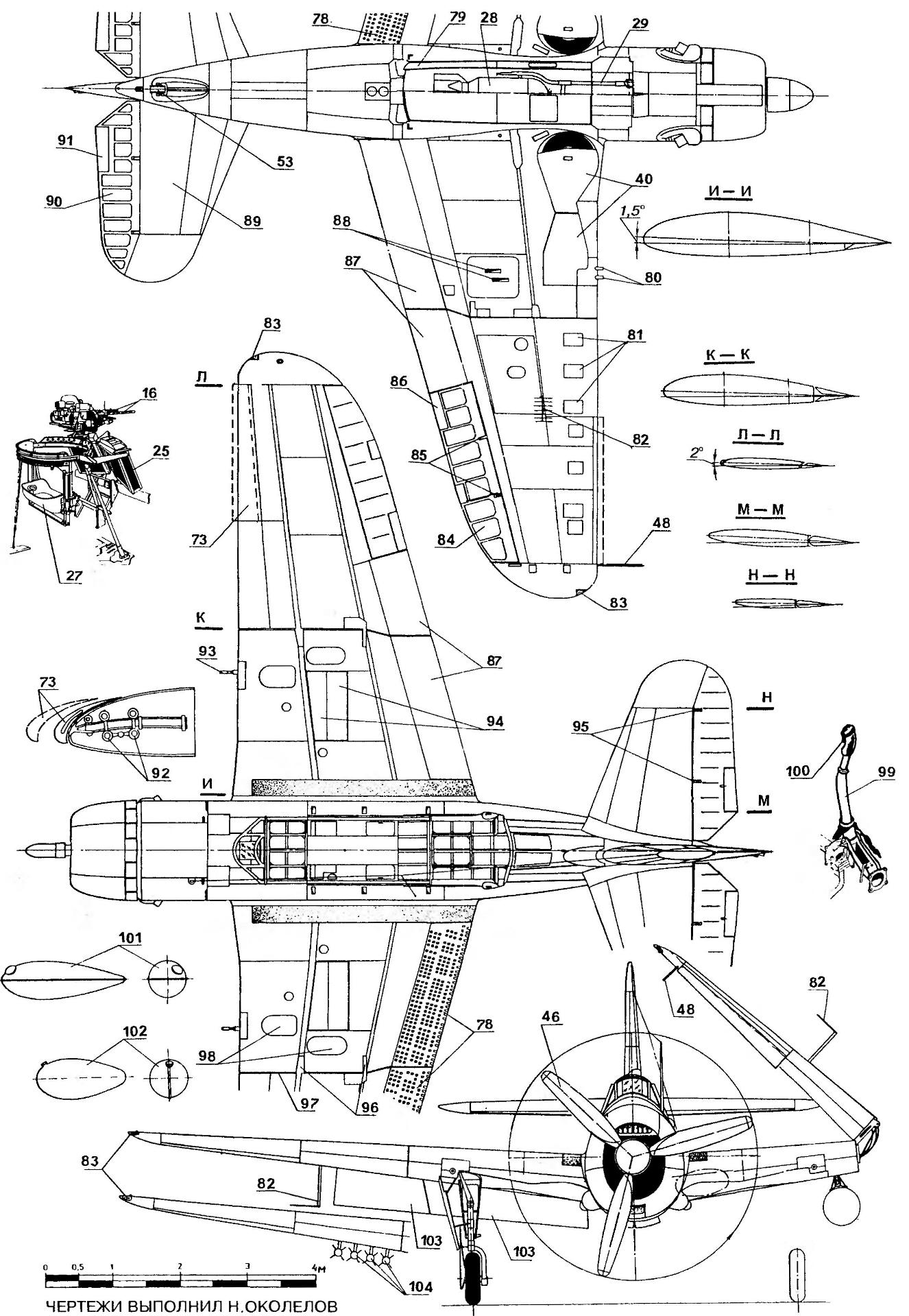 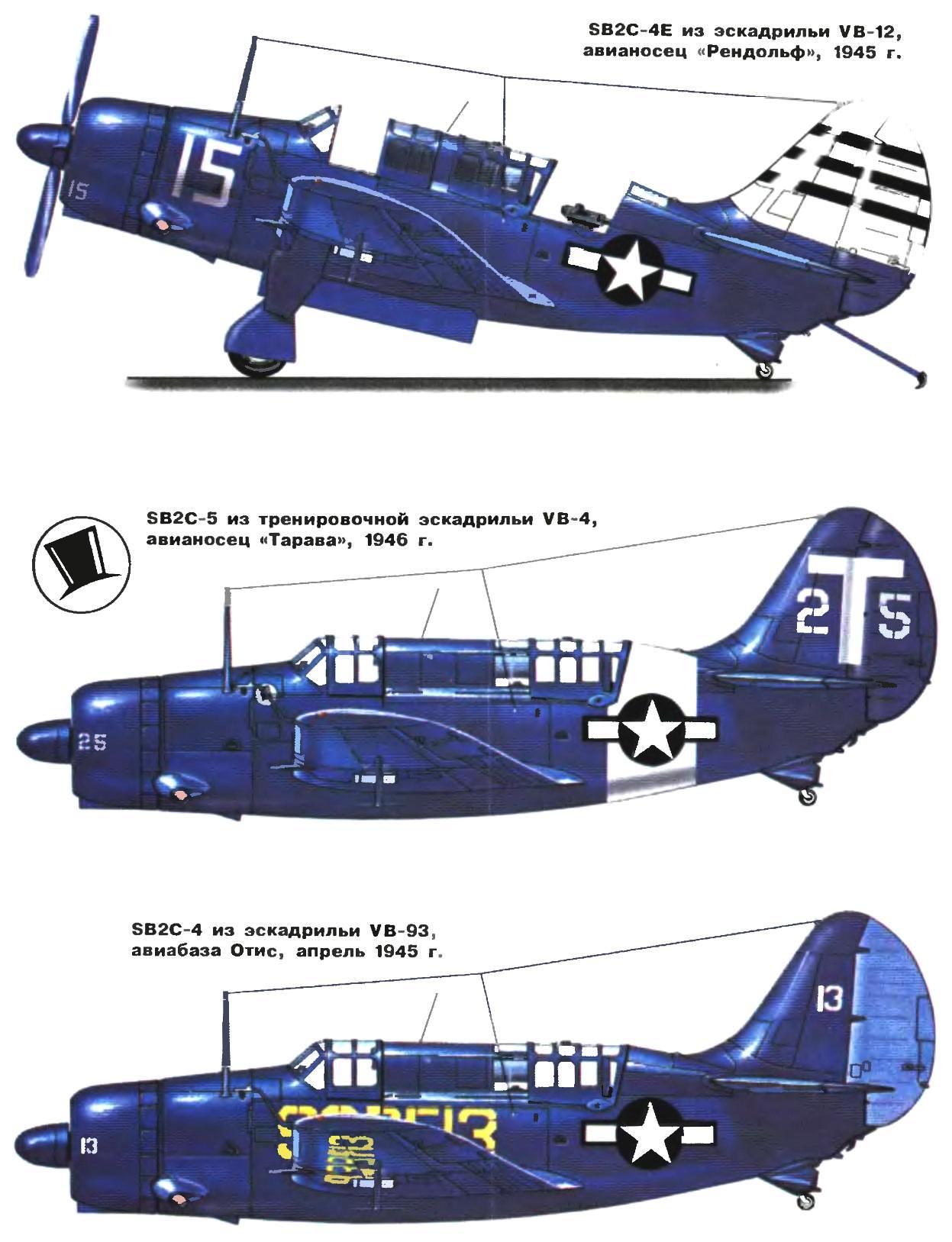