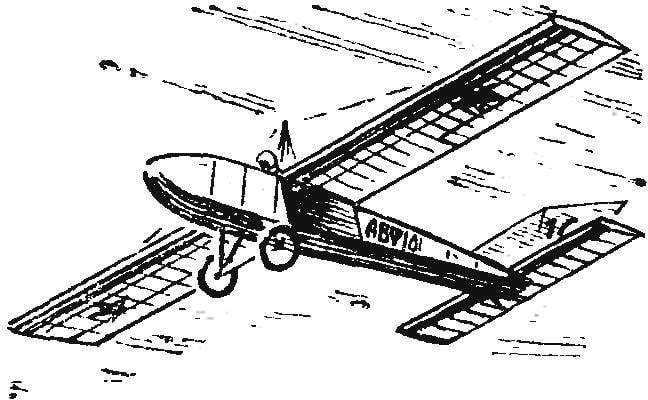 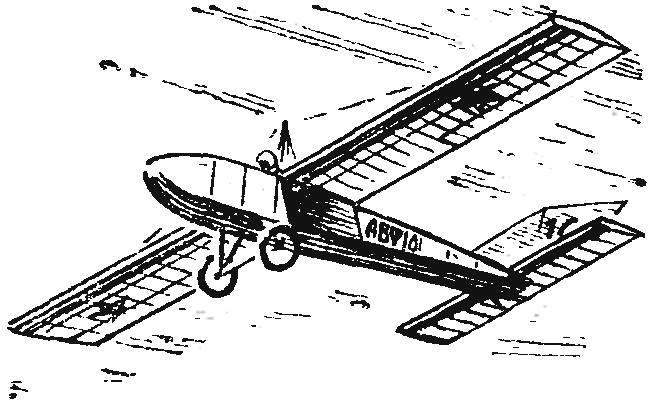 In 1921 pyatnadcatiletnij student Alexander Yakovlev read a book on the history of technology. In one of the chapters talked about the emergence of aviation, there was a model description of the airframe and was given his scheme. And here’s the apartment… turned into a workshop. Smells like glue, the floor littered with shavings and scraps of paper. No games, walks, entertainment. More than a month was built by Alexander of thin pine planks, obtiva them with paper and fastening with nails and glue glider model.
She had two meters and a scope, and a home test it was impossible. Had to disassemble and move to school. In the great hall in the presence of many curious Yakovlev launched its pedately camera. The glider flew fifteen meters. Joy was not the end of the model was floating!
“I felt her movement, life! — later recalled by A. S. Yakovlev in his book “stories of the aircraft designer”. Here born my passion for aviation.”
In August 1923, Yakovlev organized the first school of Society of friends of air fleet — ODF (the predecessor of DOSAAF]. Aviation enthusiasts, school No. 50, and their were about 60 people, built a model, and then started making the glider. By the time the organizer mug graduated from high school. Under the guidance of renowned aeronaut N. D. Anoshenko and his project he made the glider “Monkey”, and in the autumn of 1923 helped to experience it for the First all-Union rally in Koktebel.
There it is the final decision — to devote his life to aviation. He had the idea to try to construct a real glider. Yesterday’s student, although familiar with the schemes of aircraft,— the decision of the brave! Difficulties did not frighten the young designer. He recalls the well-known educator air aces, pilot-instructor S. N. The lyushin, “he was a strong-willed, inquisitive and very determined.” Had to master the theory of design, calculation of strength — books, notes of a student of the Academy of air fleet of Ilyushin, who willingly offered advice, explained the incomprehensible.
In the beginning of 1924 the project was finished. Calculations and drawings were reviewed and approved in tekhbyuro glider circle Academy air fleet (nowadays Military-air engineering Academy of a name of N. E. Zhukovsky). You can now proceed to construction. But where to get money to buy the necessary tools and materials!
The club organized the paid student night, ODWF. Several students made a presentation on the topic with the very original name “From the mystery and the deification of nature to its enslavement”. The campaign was successful. And the work has begun! Materials were got at an aircraft factory, but all to the last detail made it ourselves. And here in the gym of the school began to take shape the airframe. Girls sheathed his percale. The special Commission gave a positive conclusion. Yakovlev and his closest aides Grounds and Grishin, together with the glider went in Koktebel on the Second all-Union glider tests.
It was a Grand at the time of the competition. From different parts of the Soviet Union arrived 49 gliders — an unprecedented number, more than any foreign competition. He headed the Committee on testing of S. V. Ilyushin. Before assembling the details of each glider carefully examined by the technical Commission under the leadership of Professor V. P. Vetchinkin. 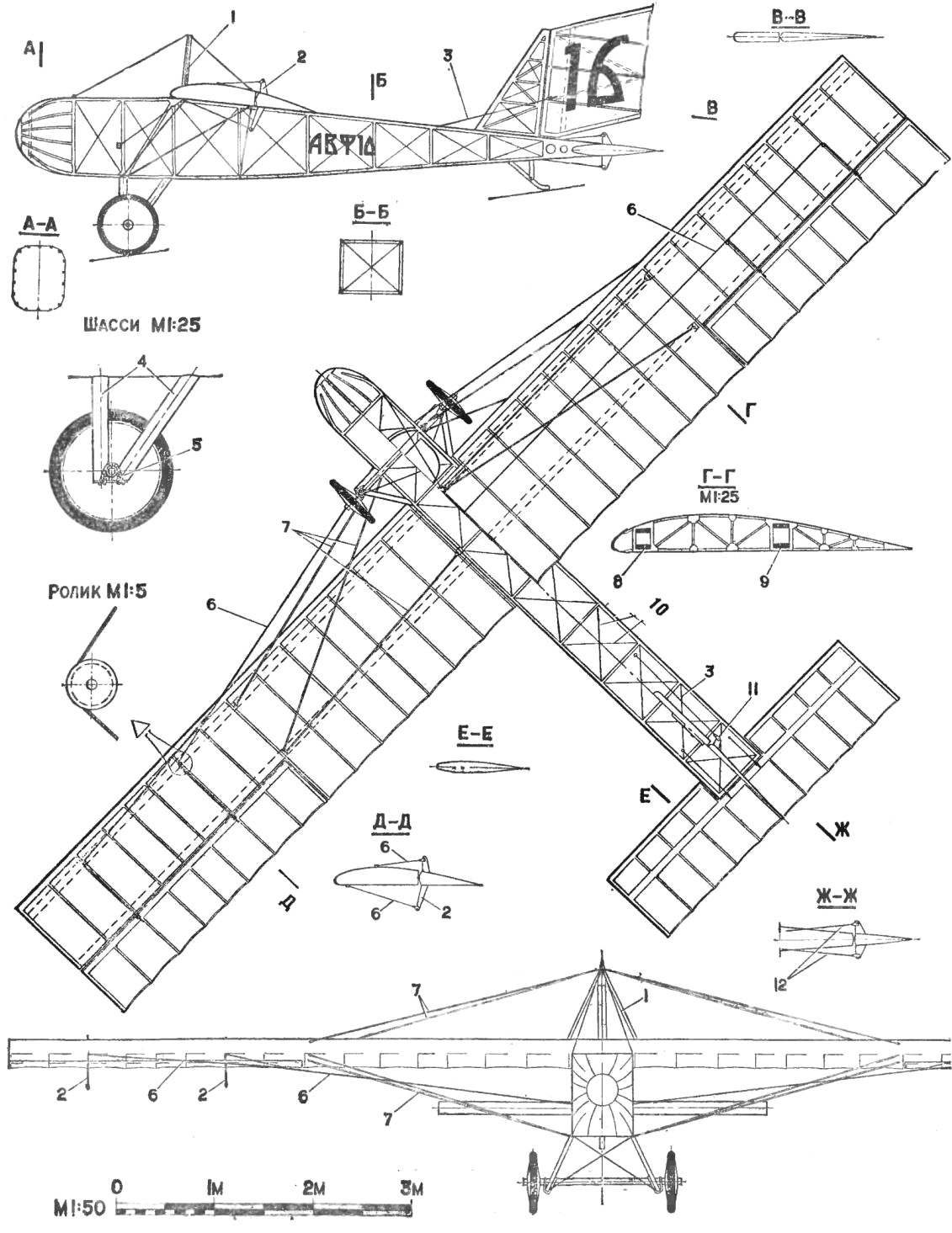 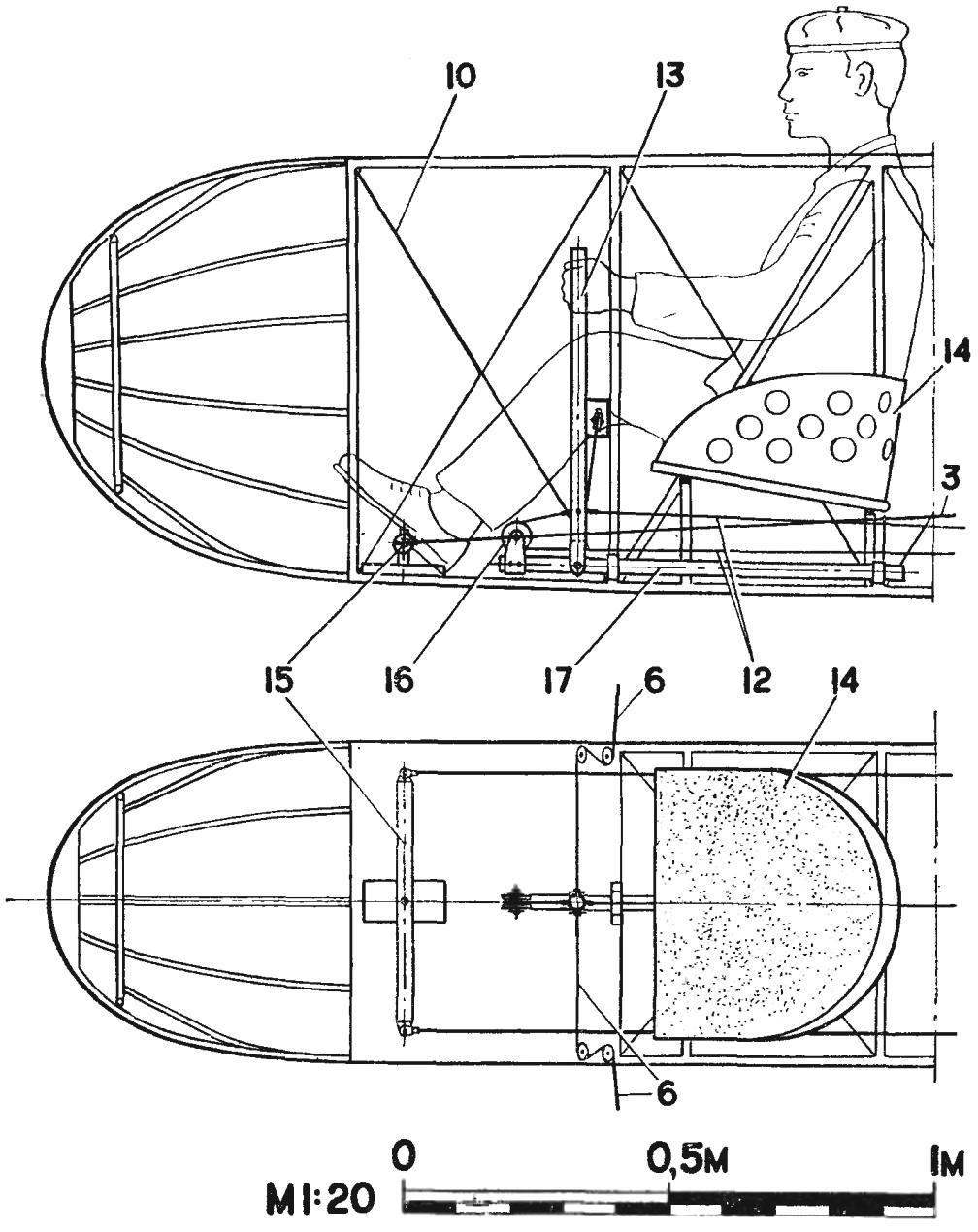 THE AIRFRAME OF AVF-10:
1 — Central stand, 2 rocking Aileron, 3 — control cable rudder, 4 — wood landing gear, 5 shock — absorbing rubber cord, 6 — control cable Aileron, 7 — banners, 8 — front wing spar, 9 — rear wing spar, 10 — wire stretching (adjacent to boarding), 11 — rocking of the rudder 12 — rope of Elevator control, 13 — handle, 14 — the seat, 15 — pedal, 16 — clip, 17 — horizontal rod.
Figure 16 on the tail of the starting room.
Received final approval and the firstborn of A. S. Yakovlev — a training glider of AVF-10 (10th glider Academy air fleet). On 11 September he was taken to the mountain Kara-Both — a lonely hill with a height of 60-70 m, with gentle slopes, convenient for test and training flights. Pilot Sergeev attached straps, and startowa team released the glider. Found that camera scenarioan correctly. Was allowed free flight. It was held on 15 September 1924 at Kara and Both have attracted attention, as was a record for flight duration with a gentle slope (1 min 46 s).
AMF-10 has enjoyed great popularity and has flown many times in day not only from Kara-Oba, but also from the Northern slopes of mount Uzuk-Sirt. In the report on competitions pilot Shmelev called him “extremely volatile”. Almost no wind and the slight excess of the takeoff over the landing site on this glider was able in a minute to fly straight up to 600 m. the Airframe differed a good aerodynamic shape, good handling and stability.
In the original form of AVF-10 had some structural deficiencies, for example, mounts and cables in the control circuit. But, as noted by the engineer E. I. Maiorano, one of the participants, Aculea with his characteristic energy and love quickly eliminated the defects, and the glider in full use for training and educational work.
24 Nov 1924 in Moscow and the room of the cinema “Shanuar” was held honoring the contestants. Prizes and certificates were awarded to 15 gliders. Among them, the AMF-10 Yakovlev — “one of the best cars transition and training purposes.”
Next year at the third plenary trials appeared similar diagram for the second glider Yakovlev AVF-20, for which he was also awarded a prize and diploma Aviahim signed by the Deputy people’s Commissar for military and naval Affairs, I. S. Unshlikht “for the best design of the training glider”.
THE AIRFRAME OF AVF-10
Is a training glider intermediate type between training and record. Under the scheme monoplane with a fairly thick wing, lying on the fuselage, with a Central V-shaped pyramid (the pig). It is fixed in the longitudinal direction by four braces two forward and two back.
The fuselage is of wood, of four longerons with struts and struts (square frames) that are linked together stretching of steel wire, covered with percale. The nose streamlined by using curved rails. The pilot seat is located in front of the front edge of the wing.
Wing — two-section spars and ribs 33, is covered with percale. Profile “Prandtl-365” with a constant angle of attack.
Tail — raskalennyj keel of triangular shape with a rudder; the horizontal stabilizer — balanced Elevator (steering stabilizer).
The chassis consists of two wooden V-shaped struts, at the bottom of the shoes which hung on a cord depreciation axle with two lightweight wheels.
BRIEF TECHNICAL CHARACTERISTICS
Dimensions, m:
length………………………..6,5
wingspan…………….12
wing chord………………1,5
Wing area, m2……18,0
Weight, kg:
empty………………………65
flight………………….135
Yuri ZASYPKIN, engineer