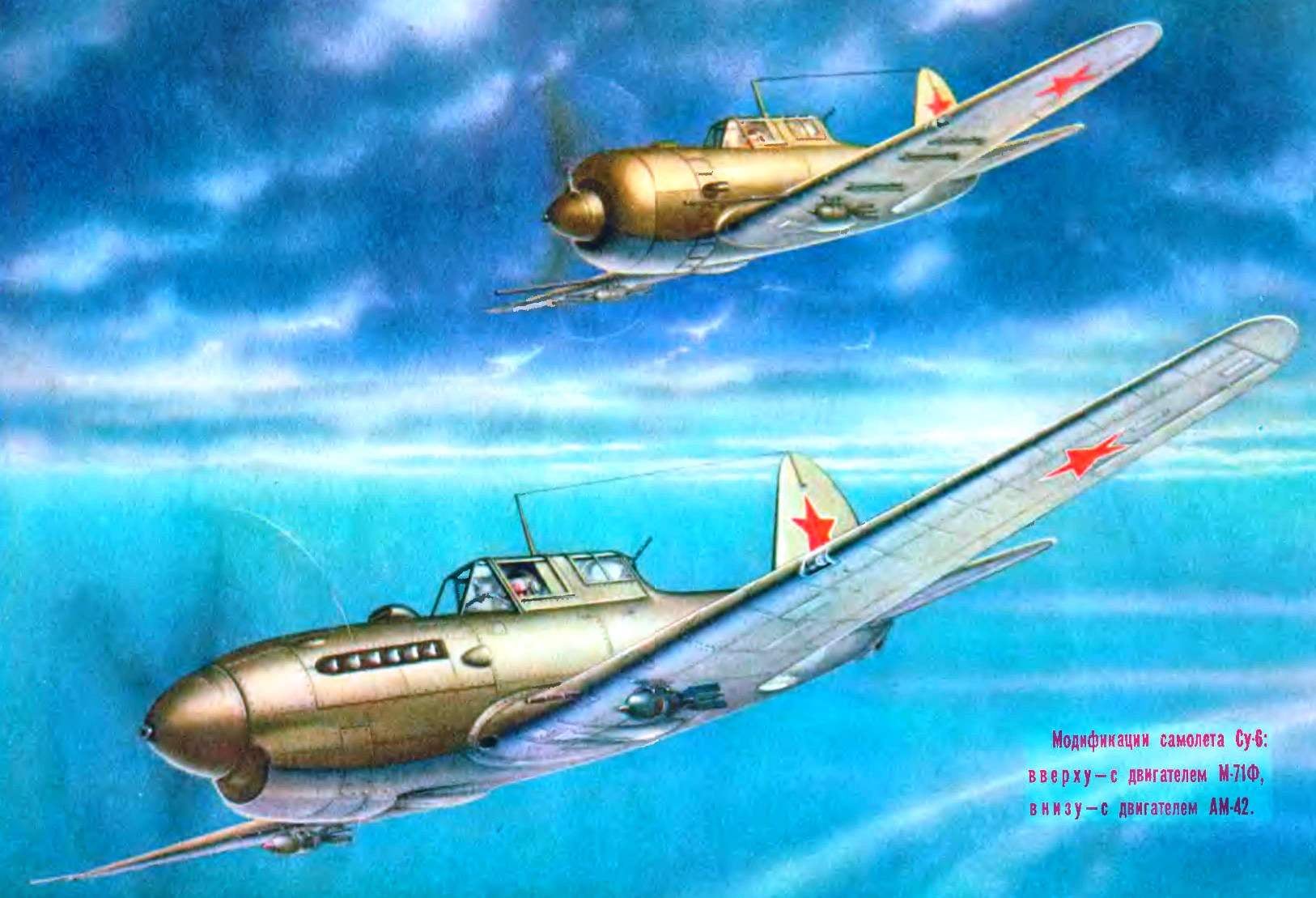 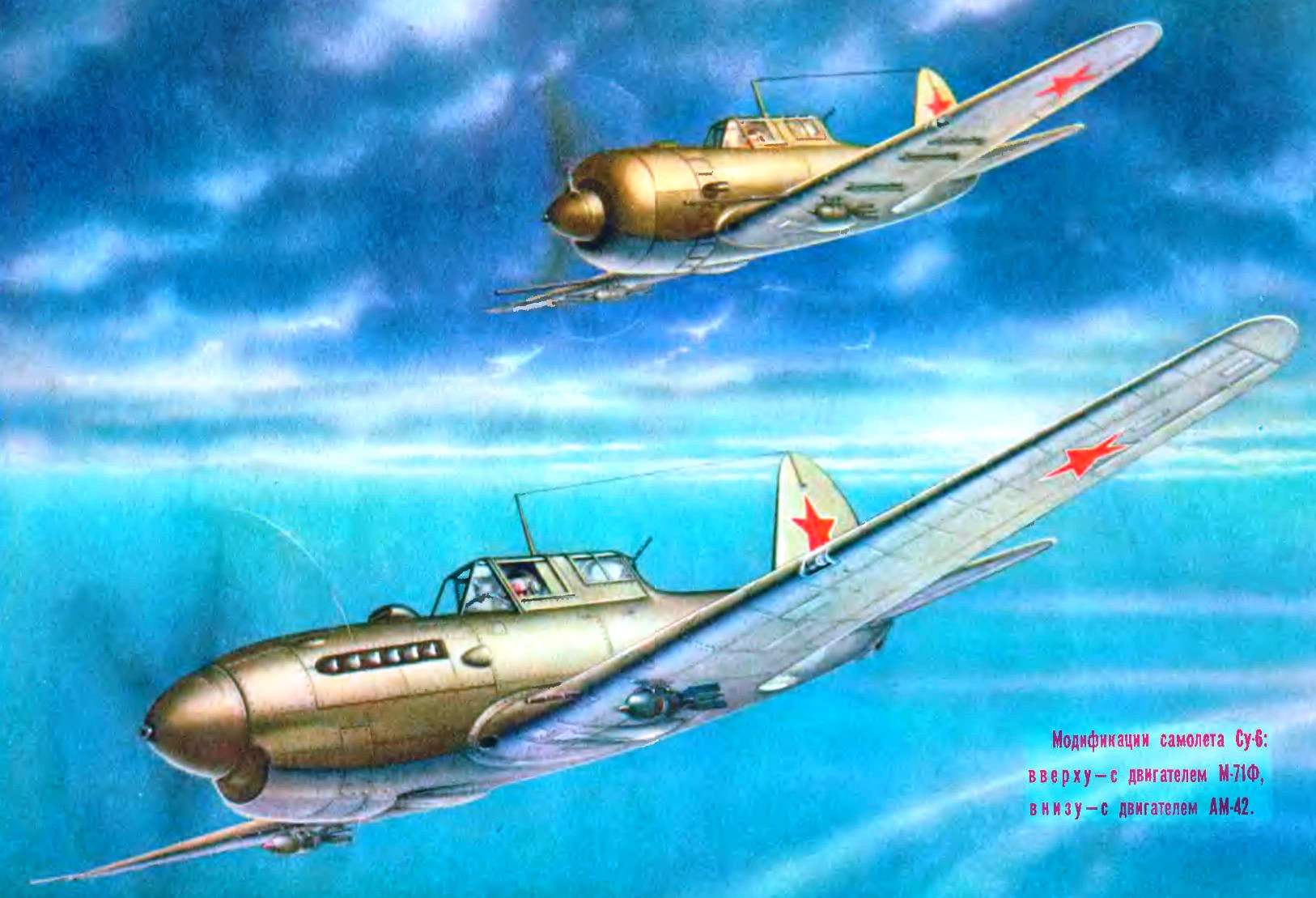 He was born in the terrible days of August, forty-one. It was created for combat and was ready to fight. Fast, agile, and with powerful small arms and rocket weapons, finally, sheltered armor — that was this aircraft, attack with the index of the su-6, logical conclusion of a long search KB Pavel Osipovich Sukhoi.
Difficult was the way for the creation of this machine; was heavy, and her fate.
…When in 1937 the engineering team of P. O. Sukhoi started the development of an aircraft designed for ground attack, aviation experts have little idea of what should be such a machine. Only the search, but numerous experiments, to check the practice could help in the development of a concept aircraft of a new type. That’s why the “classic” storm troopers during the great Patriotic war is preceded by a number of planes, more or less embodying the idea of the assault air strike. Design created in the design Bureau of P. O. Sukhoi, in this series, considered a milestone.
The first option is built on the basis of multi-purpose aircraft, which bore the cipher “Ivanov”, was sort of the approach to the topic. -Bomber attack that had all the features of the cars of the older generation, he did not satisfy either the designers or testers.
And then we made the brave move of the new design removed all that interfered with her “specialization”, as a stormtrooper. Thus was born the project a single combat vehicle with the engine M-71 capacity of 2000 HP And design, K. Shvetsova. The aircraft successfully passed the test. However, the experience of using attack aviation in the great Patriotic war led to the conclusion about the necessity of equipping attack aircraft the rear of the firing point to protect it from enemy fighters. 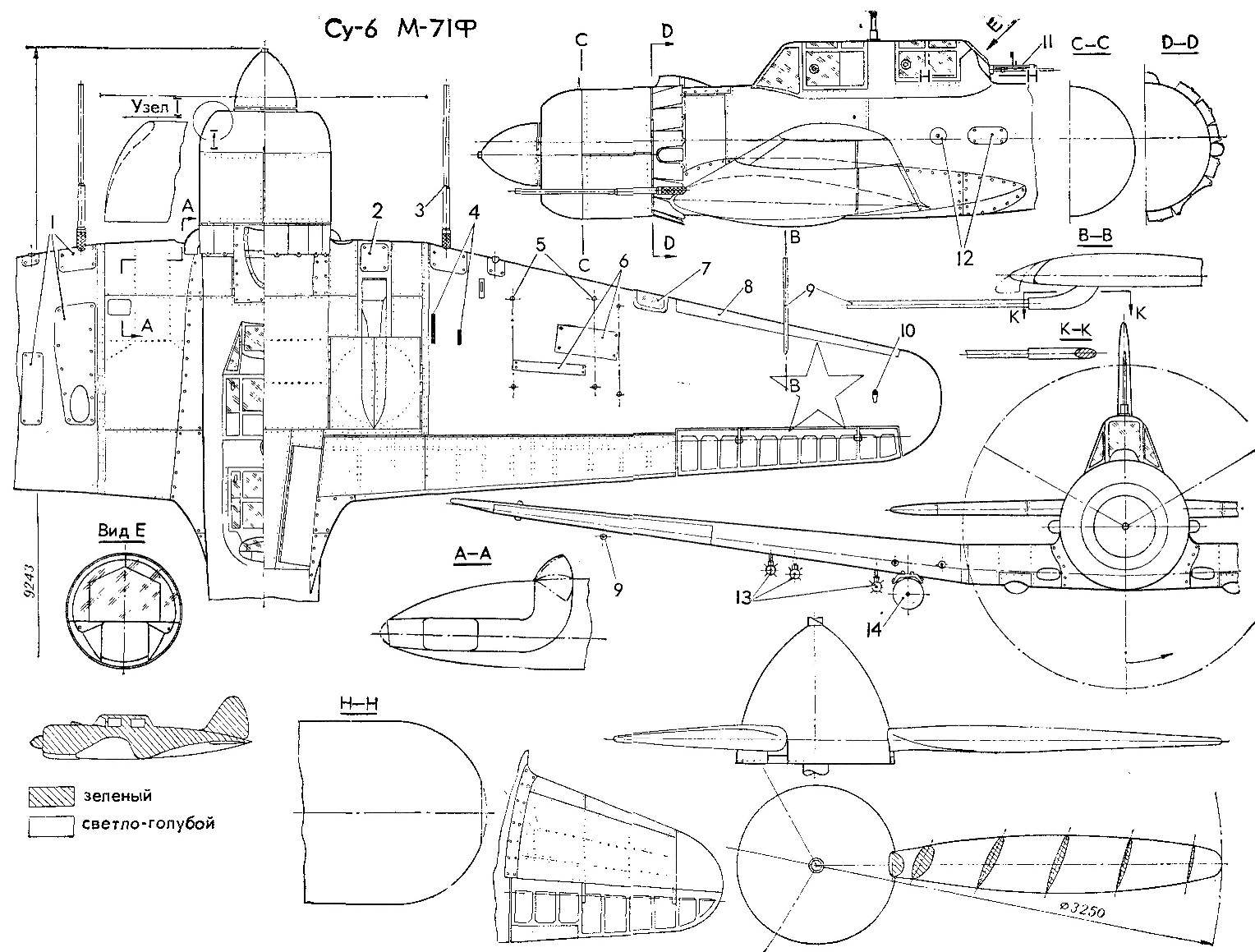 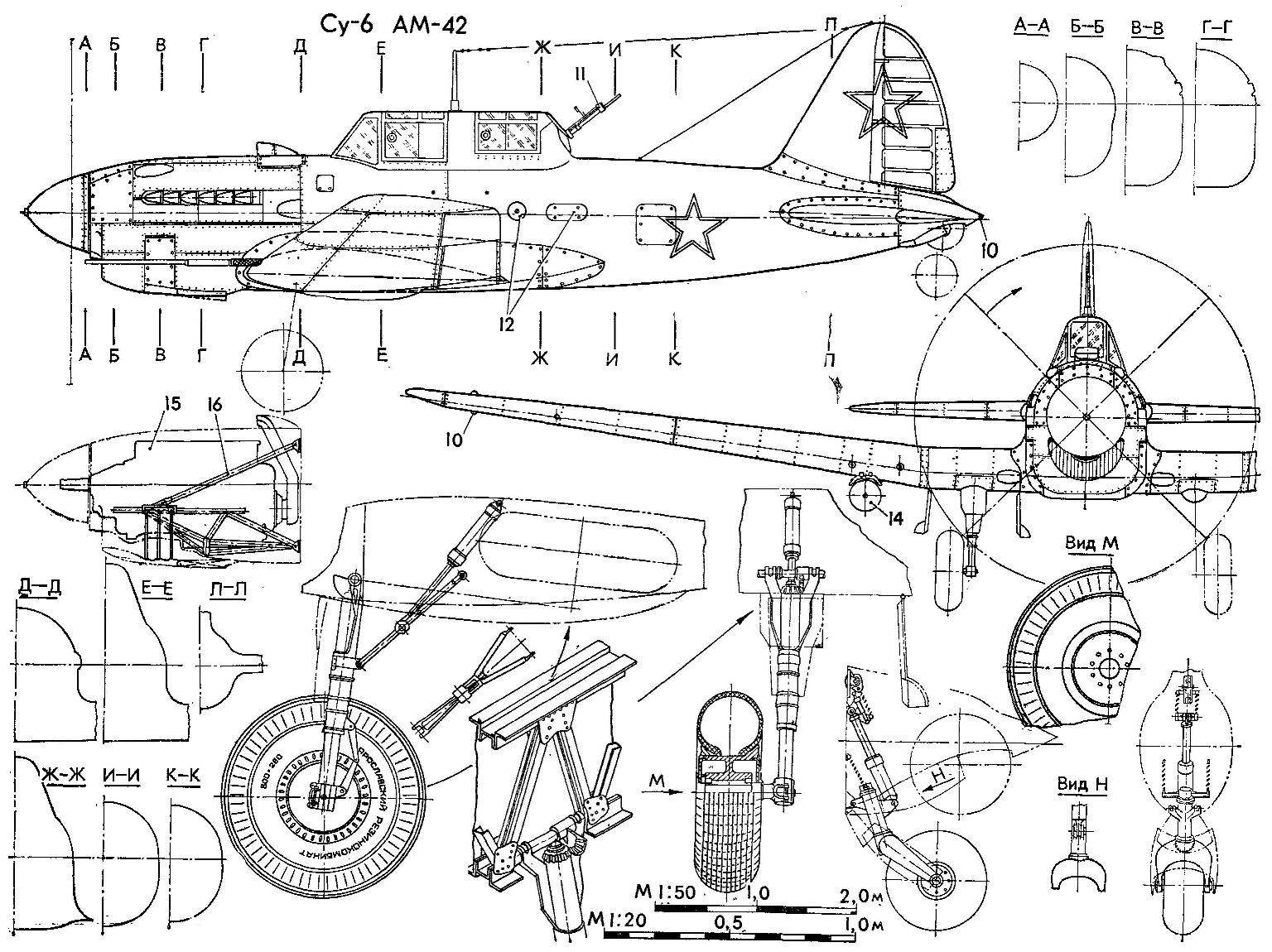 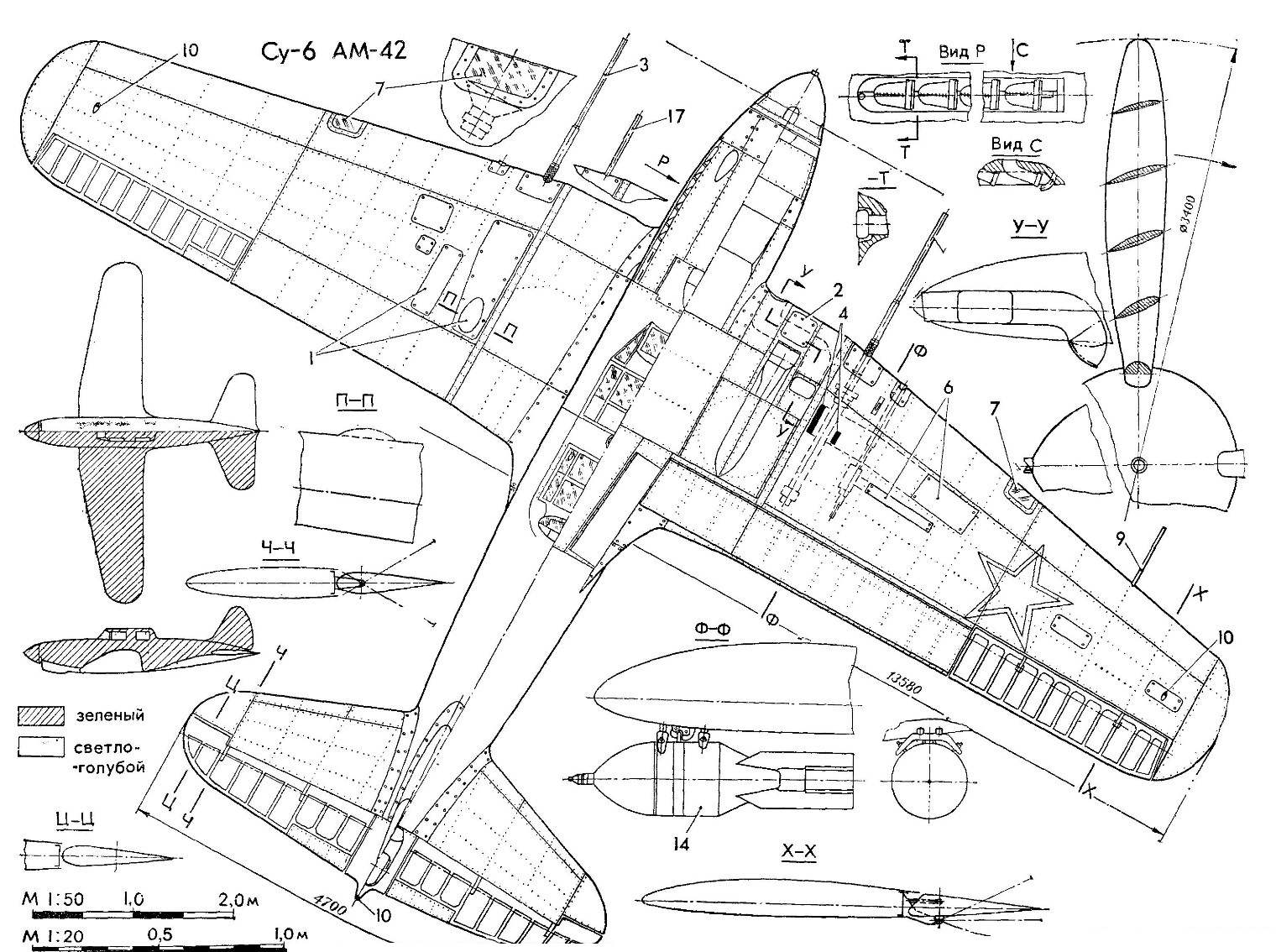 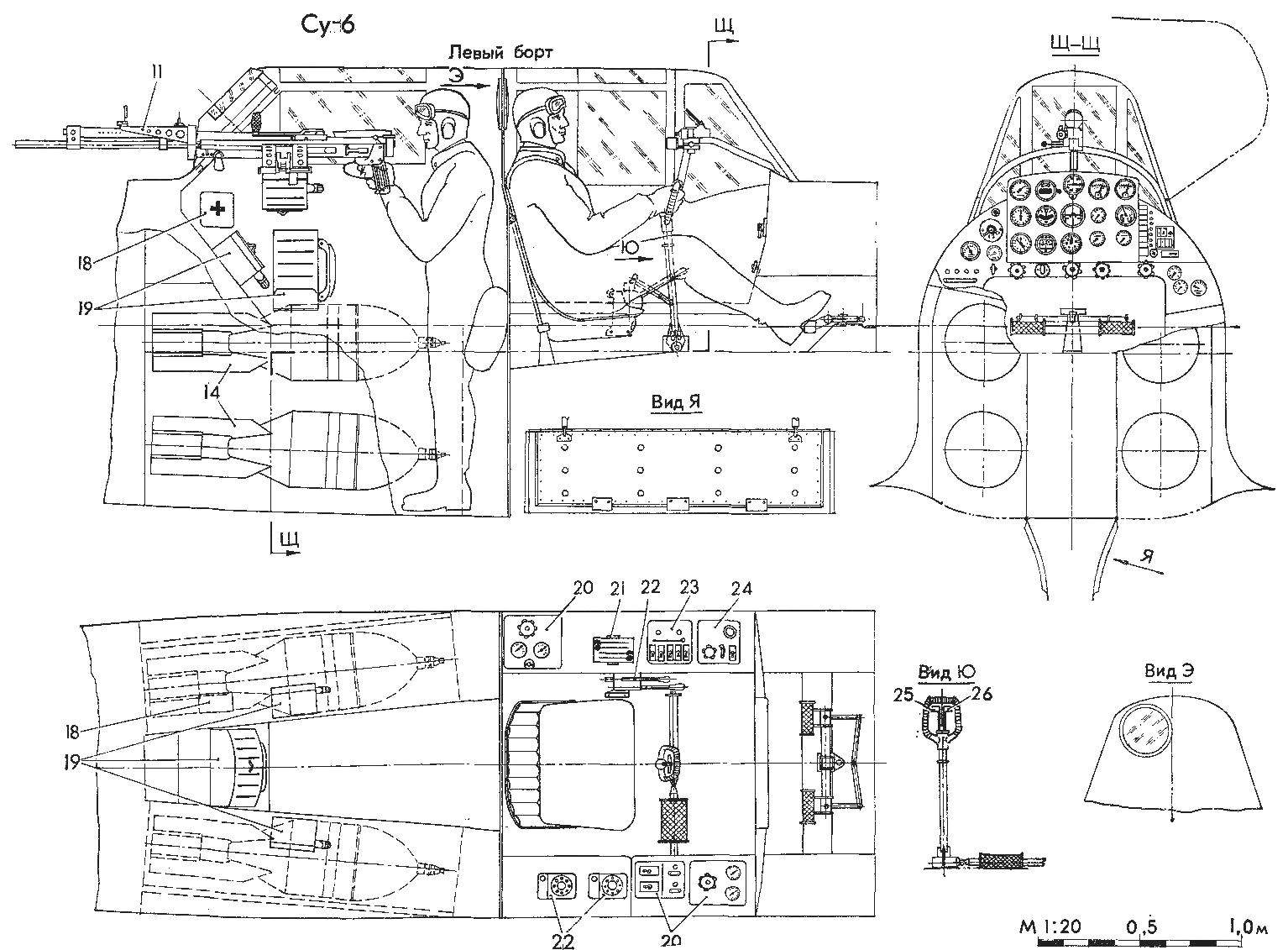 Su-6:
1 — hatches for maintenance of guns and machine guns, 2 — hatches for maintenance of cooler, 3 — cannon, 4 — hole release liners, 5 point — mounts holders RS-132, 6 hatches to reload cannons and machine guns, 7 an aircraft headlight, 8 — slat, 9 — Pitot tube, 10 — navigation lights on 11 — machine gun gunner-radio operator, 12 hatches for loading of the bomb Bay, 13 — missiles RS-132, 14 — explosive aircraft bombs weighing 100 kg FAB-100, 15 — engine AM-42, 16 — welded motor mount, 17 — VYA cannon, 18 — kit 19 — the stores of ammunition for the machine guns, 20 — management of the recharging guns, 21 — motor control, 22 — managing bombermana, 23 — switch Board, 24 — remote control for landing gear, 25 — trigger the firing of machine guns, 26 — trigger the firing of guns.
In 1942, on the basis of the single aircraft built double armored su-6 (2A).
“On the maximum speeds, rate of climb, ceiling and range of the su-6 M-71F is much superior in service with the VVS red Army assault aircraft Il-2. Su-6 to your booking and flight-combat qualities are primarily intended for the solution of assault task, but it can be successfully used to combat enemy bombers…” — that was the conclusion of the Commission that conducted the public test of the machine with the engine M-71F. For the creation of the su-6 attack aircraft chief designer of the aircraft, P. O. Sukhoi was awarded in 1943 the State prize.
To establish serial production of the M-71F in the difficult wartime conditions failed. Therefore, in early 1944 the aircraft was converted into a water-cooled engine AM-42 with a capacity of 2000 HP designed by AA Mikulin. It was closed with an armoured hood, who, along with cockpit and hand formed the body armor. Now used a four-bladed metal variable-pitch propeller AV-9L-172. Under the engine is the air / water horseshoe-shaped radiator. The outputs are the oil radiators were made on the lower surface of the wing.
In connection with the increase in aircraft weight (due to the installation of a heavier engine) a wing made of all-metal, its area is increased. The slats removed, the Pitot tube was moved from the bottom surface to the toe of the wing. The elevators introduced horn compensation.
In the process of flight testing of the gun was replaced with a more lightweight system Volkov — Yartsev (VYA) of the 23 mm caliber, which allowed for the same takeoff weight to take up to 600 kg of bombs. In this form of flight data of su-6 engine AM-42 had no advantages over already put into series production by Il-10, therefore, further work on the aircraft was carried out.
Both versions of the aircraft had the following coloration: top green, bottom blue. Differed only stars, which the su-6 AM-42 was with white trim.
Su-6
Su-6 (2A) with the engine M-71F with a power of 2200 HP — single-engine cantilever monoplane with low wing, normal tail surfaces and retractable landing gear.
The wing consists of a center section and two outer consoles connected to it through the spars nodes. All-metal center console — dvuhlonzheronnoe design; last — wooden, with metal longerons. In the center section there are niches in which are placed the wheels when retracted. Front struts located armored oil coolers with exit openings on the upper surface of the wing.
Consoles placed two cannons and two machine guns of 7.62 mm ammunition with a total of 1400 rounds. Access to small arms is carried out through hatches. On the lower surface of the consoles has a point to install six rockets RS-82 or RS-132 (previously they were called the rocket gun), and free suspension of the two bombs, weighing up to 250 kg each. On the left console installed aircraft headlight, on the right side Pitot tube with the attachment point on the bottom surface. Lateral stability at high angles of attack is maintained due to the automatic slats in socks consoles wing (the area of the ailerons). Slats and flaps are all-metal. The frame of the ailerons are metal covered with canvas.
BRIEF TECHNICAL CHARACTERISTICS 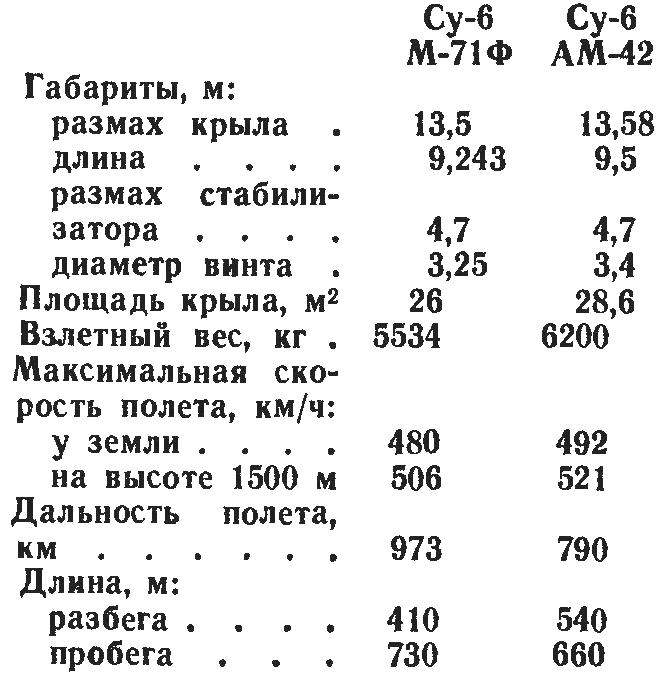 The front part of the fuselage, representing a cockpit and arrow — armor, rear — solid wood construction. Under the cockpit is a fuel tank. As in all aircraft designs P. O. Sukhoi, bombs placed inside the fuselage in the bomb Bay, which are located outside the tank along the sides of the cabin arrow. The sides of the fuselage cut out hatches for loading bombs (large suspended on bead locks, shallow loaded in bulk). Cabin arrow ends blister installing under heavy machine gun UBT 12.7 mm with four stores in 49 rounds. Over a machine gun to protect the shooter installed bulletproof glass.
The stabilizer metal, wood keel with plywood sheathing, rudders duralumin frame covered with canvas. The chassis is retracted back into the center section. When the wheels are rotated 90° by means of toothed gearing. Wheel — populallon size 800X260 mm. the Crutch according to kinematic scheme is the same as the su-2, with wheel 400X150 mm. Almost all management to enhance survivability duplicated.
The air-cooled engine M-71F with a three-blade propeller AV-5-4A is mounted on a welded frame and closed by a hood-type PASS. The cooling air exits through a slit with adjustable flaps.
N. GERDYUKOV, engineer