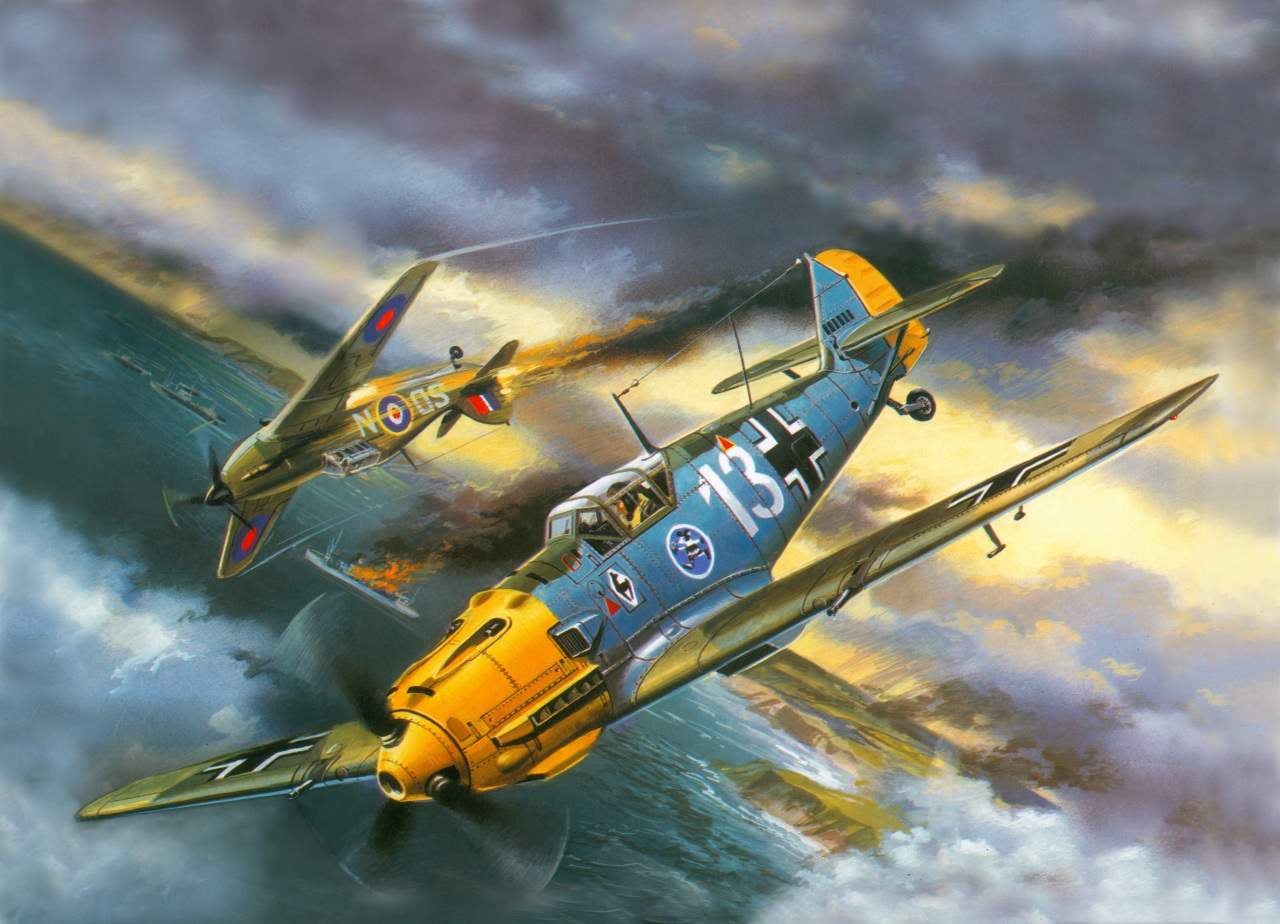 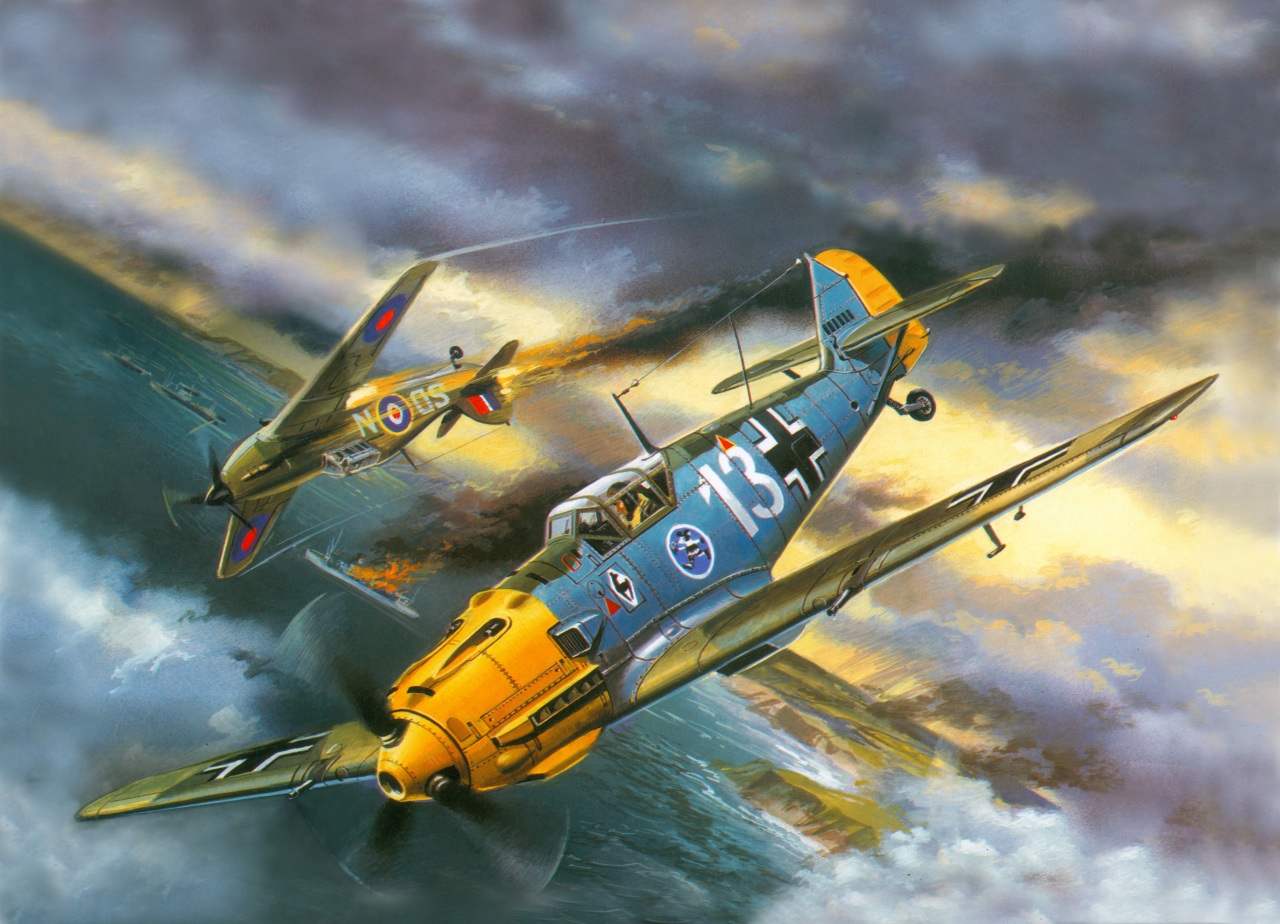 Fighters Messerschmitt Bf 109 first modifications. (The end. Beginning at No. 7 in 2004). Frontline service Bf 109 in Spain began suddenly and quite successfully. In October 1936, when the air first came 109V5 Bf and Bf 109V6, at the BFW plant in Munich received an order from the air Ministry on the preparation of several planes to be sent to Spain for testing in combat conditions.

All arrived from Germany new planes, including first serial No.111B-1, Do17 E-1 and Ju86 D-1, brought in a flight group VK/88 (Versuchs Kommando), which was part of the Legion “Condor”. The group was tasked with conducting a combat situation the military testing new technology and report with the findings, aimed at improving its flight characteristics.
The Assembly of the Bf 109 ended in Dec.
By this time the airfield arrived specially selected, best-trained German pilots. One of them, Trautloft — later recalled that many pilots wanted to get into experimental unit to check in the battle of new aircraft.
First landing in Tablada raised in a Spanish sky new the Bf 109V4, Trautloft. On his plane he painted a green heart, but this emblem did not bring him luck — the next day the aircraft was damaged on takeoff a pilot and flying is no longer involved.
By December 20, the composition of /K/88 in in Tablada had three Bf 109 (V3, V5 and V6). The initial period was very difficult for the German fighters — almost every flight was accompanied by air battles. The Republican command concentrated in the area of the Madrid front the greater part of his aircraft and provided the rebels with fierce resistance. To intercept almost all the group aircraft, EN route to Madrid. This forced Franco to abandon the action in the daytime and go to night bombing.
Experimental unit refocused on the Northern front, where the air battles were not as violent in nature. From your aerodrome in Tablada in the Bf 109, Not.112, Ju87 and Hs123 began to make raids into the area of Bilbao and Guyon.
The pilots of the Legion Kondor was looking forward to the arrival of the new Bf 109. 112 and Hs123, well-established in a difficult combat situation. Forced to fly obsolete planes, German pilots lost confidence fell their morale.
At the end of February in the port of Cadiz began to unload the court that delivered the new batch of 15 fighters. They were all sent to the second squadron 88 group (2.J/88). The first three Bf 109B-1 pilots Joystick, Schlaffer and Godek ferried to the squadron in Almorah. These cars had wooden screws and machine guns were supplied with a mechanical (cable) system recharge. Aircraft engines were not very reliable and quite often fail.
With the arrival of new equipment J/88 was reorganized in April disbanded 4 Staffel (Staffel, it. — squadron), 1 and 3 Staffel Staffel retained in service fighters do Not.51, Staffel 2, armed Bf 109B-1, was headed by Lieutenant Lutzow. From 4 Staffel disbanded the squadron moved the logo is an image of the cylinder, so almost all of the Bf 109B-1 was on the left side the same logo.
Beginners have mastered the Bf 109 was fast enough, as all the training had only consisted of three flights. The plane was so easy to learn that until 1942 the Germans quite successfully without training modification of the Bf 109.
Having failed to capture Madrid, Franco decided to focus its efforts on the capture of the Republican-controlled North of the country near Bilbao. In the same area were the main forces of the Legion “Condor”. The aircraft flew to airfields in the vicinity of Vitoria and Burgos. In the same area is located and the second squadron 88 group (2.J/88) with his seven Bf 109 prepared for aerial combat.
Aerial reconnaissance revealed a small number of government aircraft. At the Republican airfields counted to twenty fighters, most of which were outdated Bulldogs English production. Bomber command consisted of several bombers POTEZ 54 and adapted to these objectives an old “Farman” and DC-2.
The offensive of Franco began on 31 March 1937. The main task of the Bf 109 at the first stage of the operation was the escort of their bombers from the structure VB/88.6 APR Lieutenant Lutzow scored its first victory at the Bf 109. In the report he wrote: “the First victory. 17 h 15 min, altitude 2400 meters, North-West Ochandiano. The fighter biplane of the CURTISS. The pilot of the downed plane has landed in our territory, using a parachute.”
22 APR opened its fighting through Lieutenant are welcome, Sergeant Hallauer and captain Janson, shooting down one I-15. One of these I-15 was piloted by Republican ACE Felipe del río, the most successful pilot on the Northern front, who won by the time seven victories. A few days earlier, on 18 April, he destroyed a Do 17 from the Legion.
The first combat loss “Spanish” Bf 109 was the aircraft of Lieutenant Wendel, shot down may 13, the Republican pilot Leopold Mortelecom, flying on I-15.
Bronetskaya offensive launched by the Republicans on 6 July 1937, had as its objective to pull the troops nationalists from the Northern front. The first success of the Republicans has forced Franco to withdraw some troops from the Northern front to halt the offensive. July 7 airfields Escolano and Avila relocated squadrons and 1 Staffel 2 Staffel of J/88. In the first stage of the battle the German fighters had to fly with great intensity, carrying out up to five departures per day — is to some extent compensated for the advantage of the Republicans in the air. On 8 July Lieutenant Pinkel and non-commissioned officer Jonasson destroyed two Republican SAT.
July 11 in the course of one hour of air combat Sergeant Baddam hit-And-15 the American H. Dahle. On the same day, Sergeant-major, Braunshweiger was recorded at his own expense of the Republican I-16. 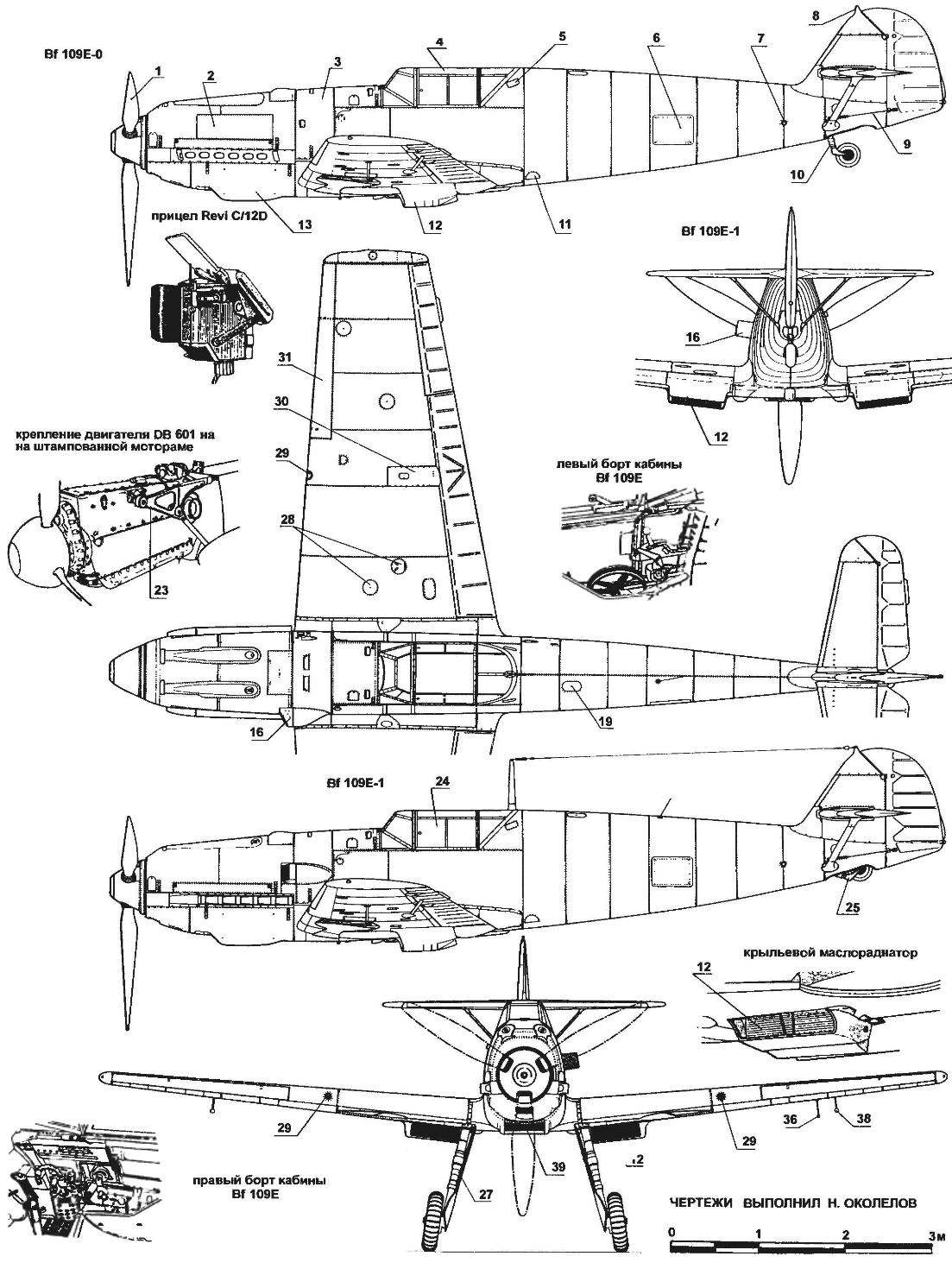 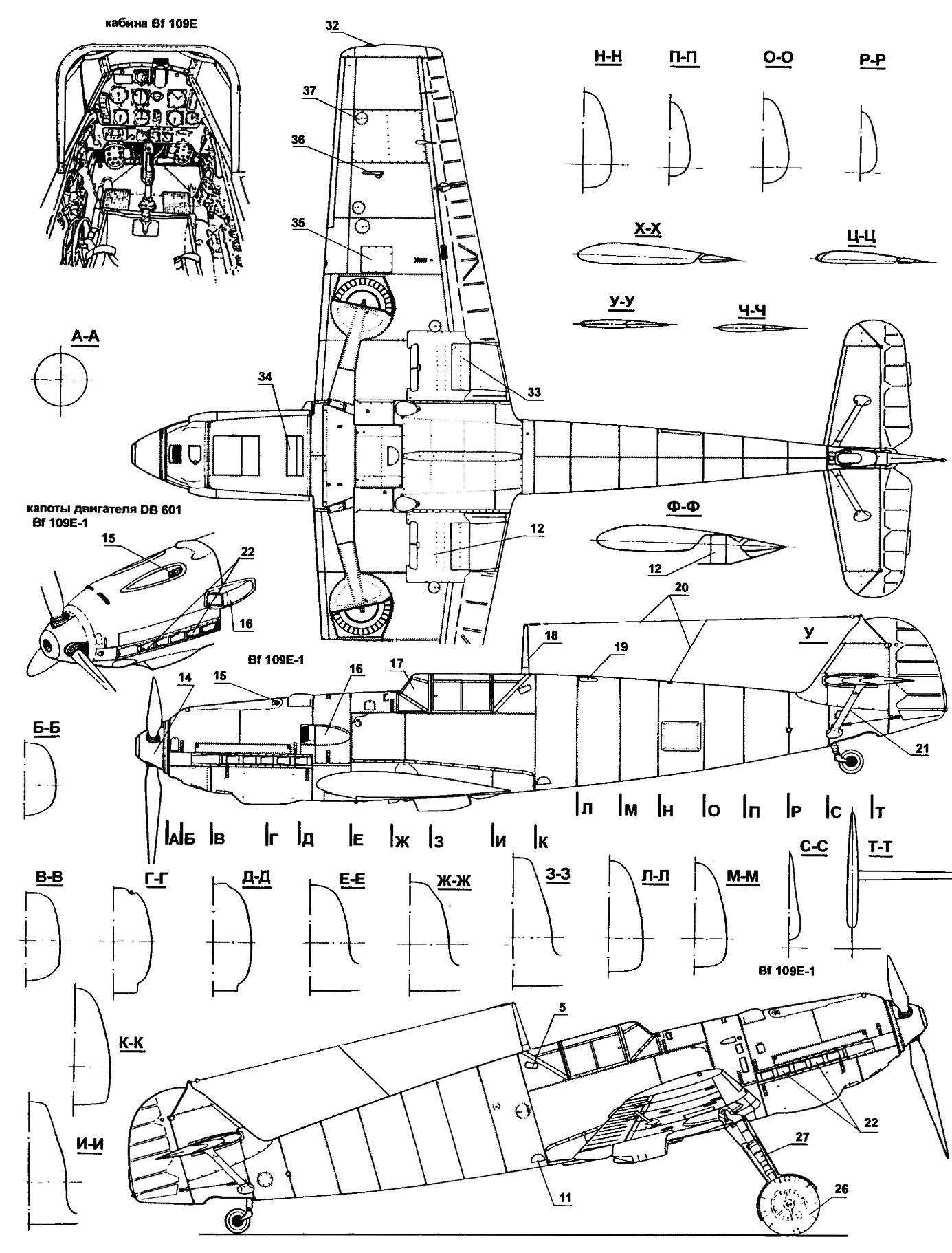 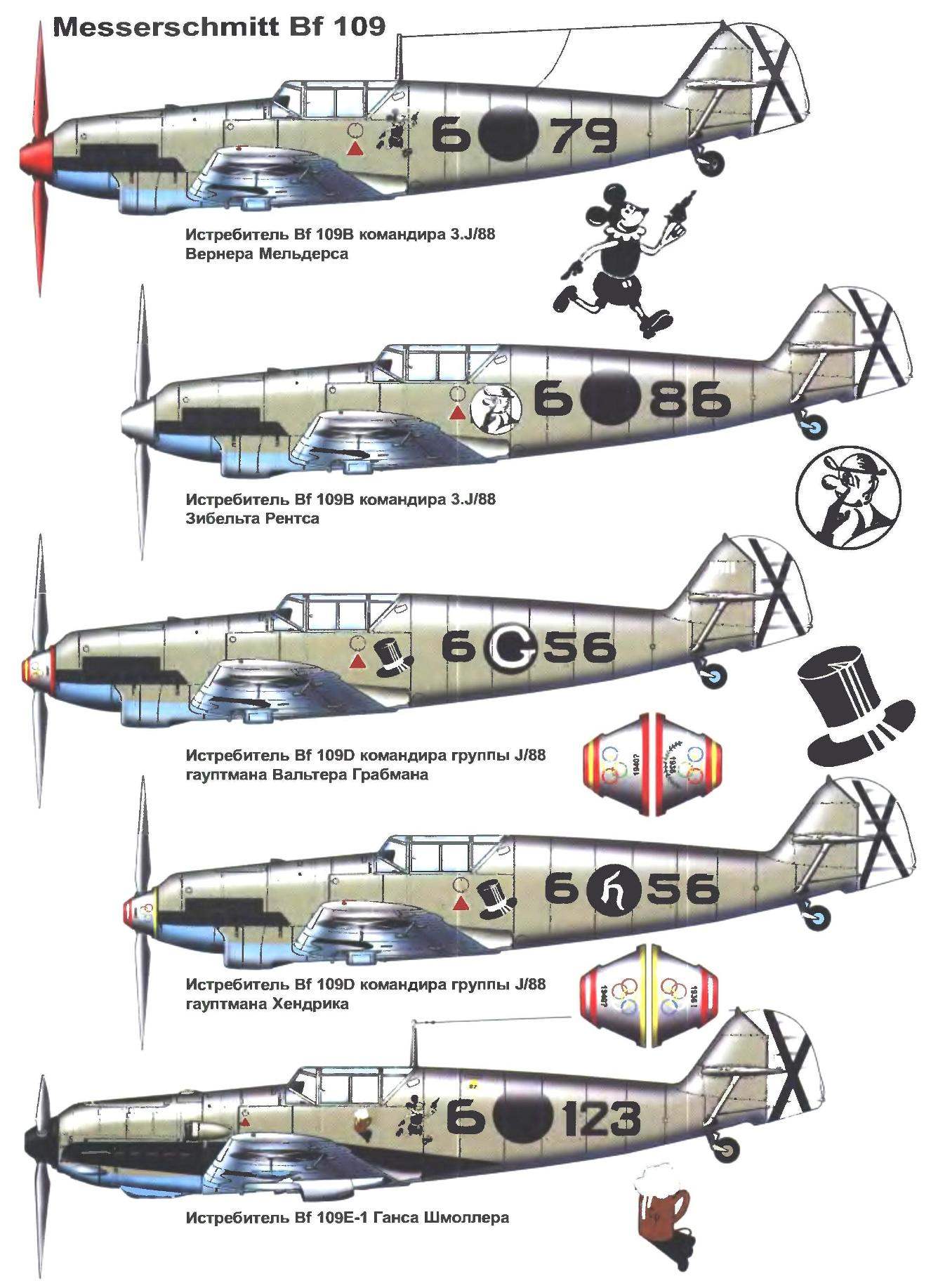 9 Jun fighters 2.J/88 was accompanied by.111 and Do17 from the composition of K/88 and A/88 when the top they had fallen to thirty-15. The result of the battle was zero for both parties. Although the Bf 109, and won victories, but his main task they performed all the bombers returned to their airfields. On 14 June accompanied by Ju87 was seriously wounded in the left shoulder Lieutenant Appr. In the second flight was shot down Lieutenant Hansa. About the events of that day wrote in his memoirs, the Republican pilot Tarazona: “I was flying in tandem with Claudina. My attention was attracted by a Bf 109 flying in a northerly direction — behind him stretched a smoky plume. Attacking it without opening fire, we forced the pilot to land on the banks of the river Mears”.
The situation by this time, Franco’s pilots can be called catastrophic: 1.J/88 there are only four serviceable Bf 109 and 1.J/88 — seven. The long-awaited reinforcements have arrived only by the end of June. All the machines are handed over in 3.J/88, the command assigned Werner Molders is departing to Germany of Adolf Galland. July 15, taking off on your Bf.109 No. 6-79, Mölders scored his first victory, shooting down a Republican I-15. From this moment began its four-month journey from unknown pilot to the most successful German pilot of the Spanish war.
July 25, 1938 the Republican troops unexpectedly crossed the river Ebro and went on the offensive. Started the biggest battle of the Spanish war. “Surprise” at the headquarters of the Franco gave way to irritation. In the first few days of the offensive the Republicans have captured 600 square kilometers of territory. Only in early August, Franco took control of the situation. The battle lasted until mid-November, with some breaks and ended with the retreat of the Republican forces to their original positions.
In the fighting at the Ebro, he alternately attended by all the squadron Bf 109. The Republican party threw in the battle, seven squadrons of I-16, two of which were manned by Soviet pilots and three squadrons of I-15. The first air combat took place on 1 August. Fighters of 3.J/88 had a fight with 25 And 15 and won three; the plane of Lieutenant Chitzena was damaged and he had to make an emergency landing outside an aerodrome.
From 17 November to 1 December, the Legion was on vacation and in the fighting did not participate. This time, the Germans tried to use for the next replacement flight crews and replenishment units of the aircraft. By mid-December consisting of three fighter squadrons, there were 37 Bf 109 modifications b, C and D. Three Spanish pilot, who as part of the Legion mastered Bf 109, began to form two Spanish fighter squadron of Bf 109 and Not.112. Their commanders had become Murcia and Pardo. On staffing divisions went purchased in Germany 13. 112 and transferred from the Legion Bf 109 fighters of the modifications b, C and D, the replacement of which was obtained from Germany, 40 new Bf 109E-1 and Bf 109E-3. Began to fly a Bf109 and Spanish speakers Morato—March 10, he first took to the air on a new plane. All in all, Spain received 130 aircraft Bf 109.
Increasingly, the Republican fighters were engaged in battle with the 109 only when its numerical advantage: in this period Bf 109 losses had almost no. However, on earth they continued to annoy SB bomber. On December 16, at the airfield of La Senia SB bomber burned two fighters.
According to the plans of Franco, the last of their offensive was to drop the Republican part of the French border in the direction of Barcelona. The initial purpose was to Valencia. The battle began on December 23 at 8 a.m. in clear weather. The next day the weather turned bad, so the fighter squadrons of the J/88 have begun active actions on 28 December. On this day the pilots of the Bf109 won six victories, the next four, and on 30 December, six more victories. January 12 was carried out a RAID on Republican airfields Valls, Vendrell and Vilafranca. The surprise attack was successful — were destroyed on the ground 13 Republican aircraft.
5 Feb Bf 109 took part in the RAID on a Republican airfield of Fi-gueras. The fighters managed to burn all the tankers and destroy the aircraft standing on the runway.
6 Feb two newest Bf 109E-1 (No. 6-98 and No. 6-96) was shot down in aerial combat by the commander of the Republican night squadron-15 Lieutenant Falco. 50 years later he described the battle: “on 6 February in the morning the mechanics began to prepare the aircraft for the flight to France. The appearance on the horizon of monoplanes was greeted without panic: all agreed that this-16. However, it was soon discovered that this “Messerschmitt”. And here is my “Chatos” and “Dolphin” (GRUMMAN G-23) Sanchez in the air. I hurried to pick up speed before the meeting with the enemy, but there is one Bf 109 flashed in front of me, and a few others began to cross my course, intending to go to attack the airfield. I caught one of them in sight and pulled the trigger of his four guns. Then I noticed that “Dolphin” Sanchez is being chased by one of the “Messerschmitt”. I rushed to meet him. To avoid a head-on collision, the enemy fighter turned sharply away and went into the turn. I was attached to him, and on the third lap he finally came into sight, and again I pulled the trigger”.
Franco reached the French border, on 10 February 1939. Operation in Catalonia ended. Republican aircraft almost ceased to exist. March 27 was the last sortie of the German fighters in Spain — Bf 109 escorted bombers do Not.111.
N. Food reserve was, A. CHECHIN