Guided missile “air — air” RS-1-U. In the late 1940-ies the main Soviet fighter-interceptor was an aircraft cannon. They can be used effectively to strike aircraft at distances not exceeding a few hundred meters. However, the rapid development of combat aircraft, the advent of nuclear weapons demanded that the fighters qualitatively new possibilities.
During the Second world war to repel a RAID of bombers was enough to bring down 5 — 10% of the aircraft involved in the RAID: achieving a similar result significantly reduced the effectiveness of the bombing. Now, in new conditions, when every attacking plane could be boarded by an atomic bomb, in front of air defense arose, a much more serious task — to bring the number of killed on the approach to the target the bombers to the maximum possible and completely unacceptable to the enemy size.
The struggle with the already existing bombers was considerably complicated by their large size, the presence on Board of a powerful defensive armament, high survivability, which is addressed by the duplication of major systems. At the same time, the development of new techniques of air combat, further improvement of the cannon armament of fighters and other similar measures to fundamentally change this situation couldn’t.
Specialists involved in in those years, the issues of weapons of aircraft, could offer only one way out of this situation — the use of guided missiles launched from the interceptor aircraft. In fact, the same conclusion came during the Second world war and German specialists managed to create the first samples of such weapons. One of these missiles — “Ruhrstahl-4” (X-4), mass production of which began in 1945, is governed by the wire, smachiwausa it as the distance from the interceptor.
The creation of such weapons and not just weapons, but, as soon became clear — a system of aircraft armament, required to meet the mass of new and complex scientific and technical problems. The rocket in this approach was merely an Executive tool, a kind of controlled bullet a Lot of issues related to the choice of its parameters, the search for rational aerodynamic configuration, immediately stood in front of developers.
So, to reliably defeat high-speed aircraft and to provide adequate ranges of launch, it had to have a powerful and highly compact engine that could accelerate a rocket to high supersonic speeds, much higher than the speed of the carrier aircraft. And aerodynamic configuration of the rocket would ensure its optimum performance handling throughout the entire range of speeds and altitudes. The missile and its detonation system had to ensure high efficiency of defeats the purpose. And finally, to develop the rockets needed a control system that can withstand considerable overload when performing the required maneuvers missile, capable of providing high accuracy of aiming and hitting the target and all this to take the rocket a minimum of space and have minimal mass.
One of the first to work on the creation of managed aircraft missiles joined OKB-293 M. R. Bisnovatyi. Developed under his leadership, aviation rocket — self-guided aircraft rocket SNARS-250 — 1952 was released on flight tests. But after the close of OKB-293 in February 1953 work on SNARS-250 stopped.
In the autumn of 1950 to develop aircraft missiles drew and OKB-301 Lavochkin, which together with KB-1 of the 3rd Main Directorate under the Council of Ministers was instructed to develop a rocket G-300. According to the original plan, the carrier of four such missiles, as well as complex radar equipment D-500, is designed to detect targets and guidance on their missiles, it was planned heavy four-engine bomber Tu-4. This complex was to ensure the defeat of missiles attacking bombers at ranges up to 15 km and altitudes up to 20 km But, as has already been shown in the first study, time to achieve such characteristics had not yet come. The starting mass of the rocket, the first Autonomous launches which ground installations held at the end of 1951, exceeded one tonne, which significantly limits its scope.
A year later, in the Lavochkin design Bureau has developed and tested an advanced missile — G-310, dimensions and weight which has been somewhat reduced. Her launches were made not with ground units, and the carrier aircraft Tu-4. However, further work in this direction still refused, because for everyone — both developers and customers, it became apparent the futility of their from use as a carrier in multi-weapon system and non-maneuverable low-speed Tu-4. For airplanes of other types system were simply unaffordable.
In the early 1950-ies in the number of organizations-developers of missiles “air — air” entered and KB-1. Here since 1951 under the leadership of K. N. PetroChina has been developing a system of aircraft armament-1 Y (K-5). Initially, this system was conceived as a fairly tiny weapons suitable for use in most mass-produced jet fighter the MiG-17.
The development of missiles for new weapons systems began in the Department of 32 KB-1, which employed a number of prominent aviation specialists —D. L. Tomashevich, N. G.Sirin etc. In the document missile received the designation “CMM”, which was glossed as “sh — low”.
For CMM was used aerodynamic configuration “duck” with crosswise arranged wings and rudders. A special role in this choice was the fact that for the relatively small size of the rudders provide the required agility of the missile-“a duck” and its aerodynamic stability under different flight modes.
For reliable stabilization rockets on roll after vanishing from the guide beam of the aircraft and before the start of the radio on its wings mounted ailerons.
Special attention from the developers of the missile demanded its engine. Of course, he was solid other for this purpose just didn’t fit. And here is the place for placing the engine on this rocket had to look up. 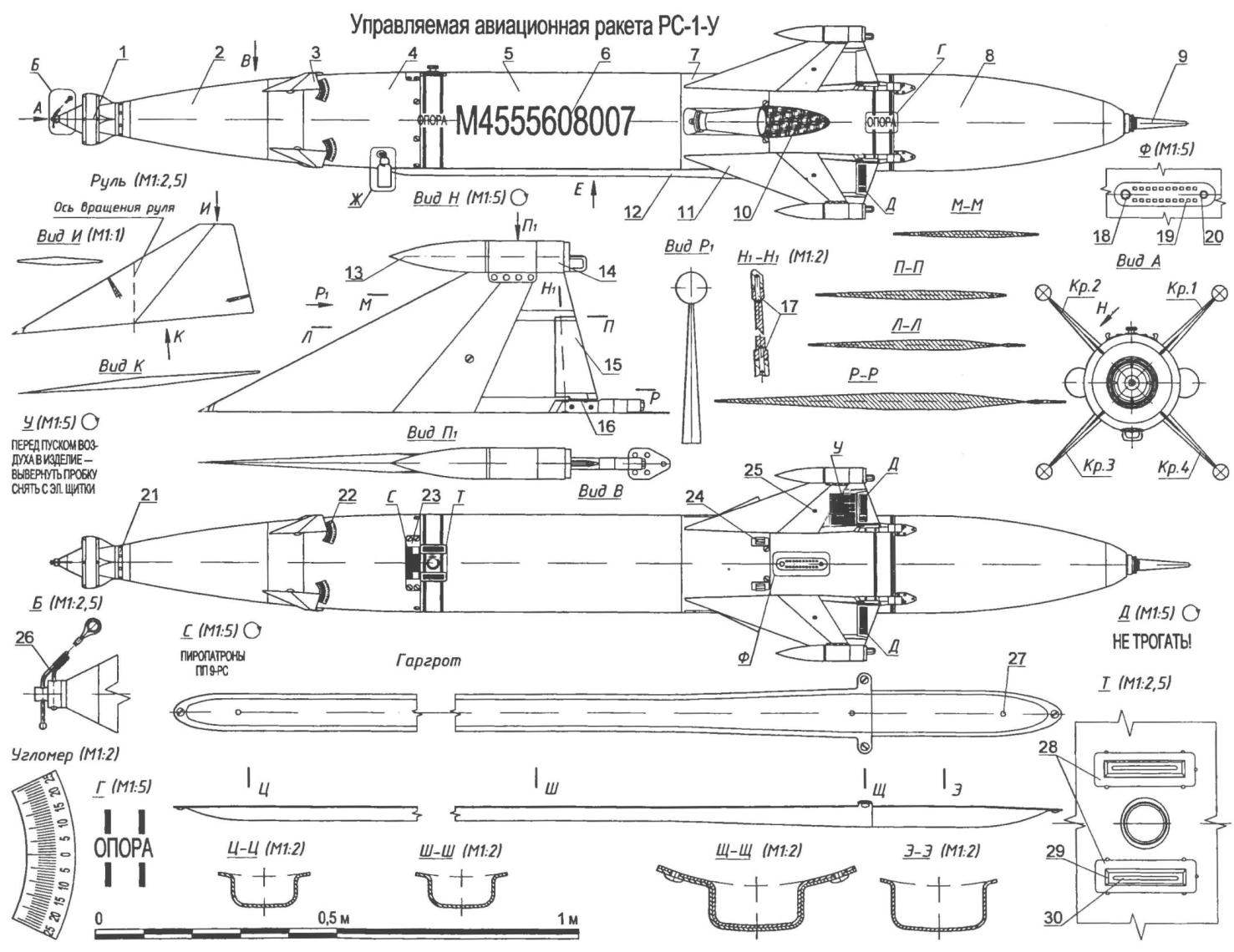 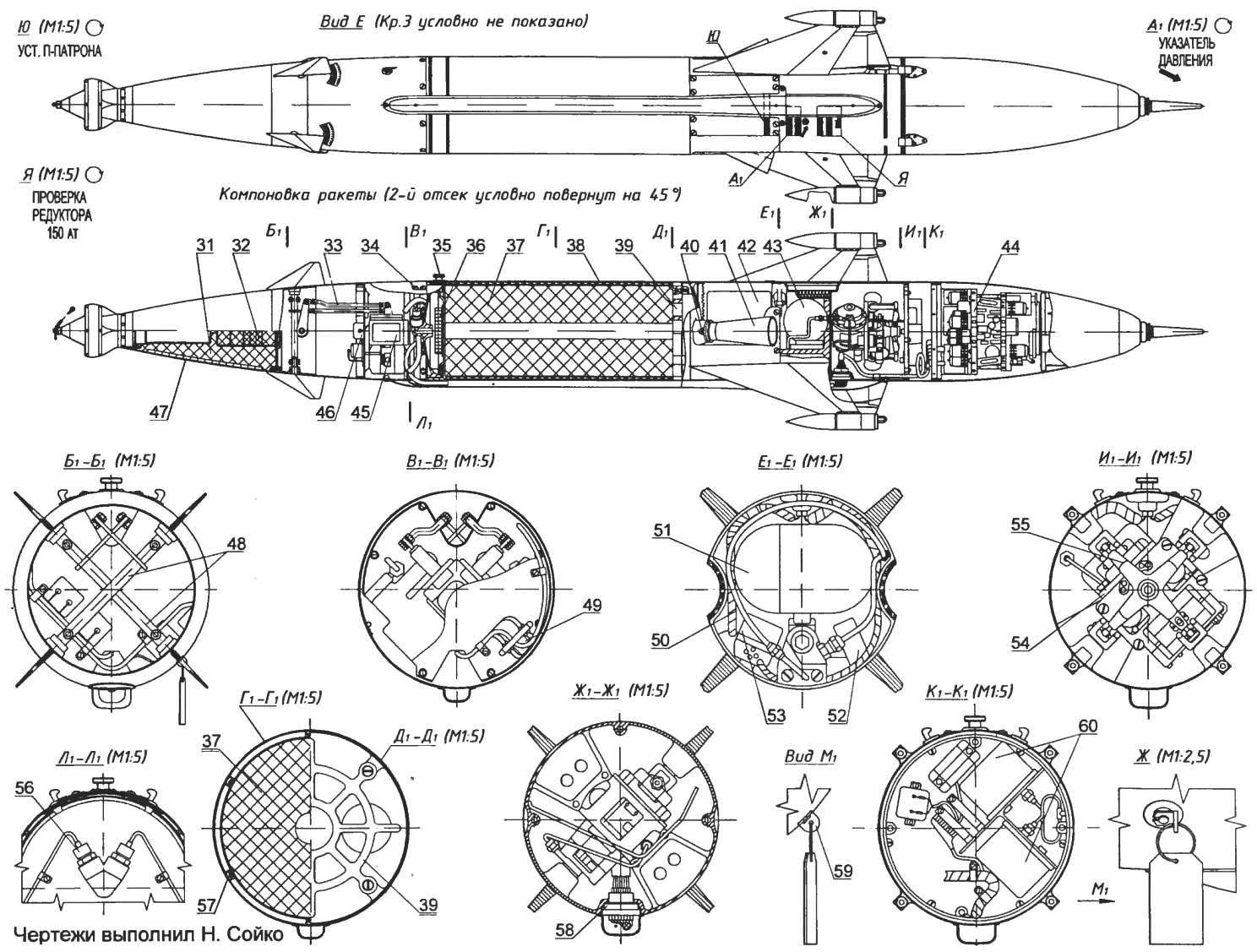 CMM launches the aircraft target was launched in the spring of 1955, and the first success came on March 8 when a missile shot down the plane-the target Tu-4.
By the beginning of 1956, the time of completion of state tests, the number of starts of the CMM exceeded seventy. Obtained in the process of testing the results were in accordance with device requirements. They, in turn, corresponded to the level of development of bomber aircraft 4 — 5 years ago. So, with the launch of the MiG-17 in the tail of the attacked target range firing range of the CMM ranged from two to three kilometers, in the range of stable auto-tracking purposes, radio interceptor RP-1 to 3.5 — 4 km. to succeed in a real shoot and intercept bombers maneuvering was extremely difficult. However, the AA guide, this work was valued highly pragmatic — as the first successful step in creating guided missiles for interceptors.
After adopting in 1956, the system received the name of p-1, MiG-17ПФУ, and the rocket RS-1 (first rocket driven). Four missiles RS-1-was placed on launchers APU-3 with lock holders 369-S.
Another carrier of the new weapons became twin-engine interceptor Yak-25. Technical project equip it with new missiles were prepared in the fall of 1954 and included a replacement for the regular aircraft radar “Sokol” with “Emerald-2”, the installation of the pylons of the suspension of missiles between the engines and fuselage, the removal of the cannon armament and the installation of additional equipment. Modified interceptor received the designation Yak-25K, and the entire complex of interception — Yak-25K-5. However, the number of these interceptors was extremely small — was known only to one group of bombers, the Yak-25, stationed on the East coast of the Caspian sea, Krasnovodsk.
A pioneer in mastering of serial production of the first domestic missiles “air — air” has become a factory of aircraft armament No. 455 in the suburban Kaliningrad. At the plant in 1956 produced 2071 rocket RS-1, and the next year another thousand. After that the plant started production of advanced missile RS-2-U. In August — October 1957 RS-2-Have successfully passed state verification tests, and in December, the plant presented the first production missile to the customer.
Of course, the first domestic system of guided missile weapons of the fighters were far from perfect. So, despite the fact that the maximum firing range of missiles reached 3 km, their start could be made only after the target was tracking the aircraft on radar, which in practice are carried out only when approaching a target up to 2 km during the whole process of aiming missiles a fighter pilot had to hold the target in the center of the indicator of the radar. It excluded any maneuvers restricted sector for possible attacks by a narrow cone with the vertex at the tail of the target, not allowed to attack the target, reaching with the excess in relation to the interceptor. Moreover, the enemy could very effectively use the maneuver to disrupt the maintenance of radar and, thus, missile guidance. Moreover, to compensate for the extra load from the aircraft carrier missiles were removed cannons, so in the case of a failed rocket attack in the pilot were the only affordable way for the combat mission to go on obviously suicidal at transonic speeds, the RAM.
In 1956, the main carrier of the missiles RS-1-the MiG-17 was no longer the last word fighter aircraft, and after releasing a small series of MiG-17ПФУ aviation industry has begun to release the first supersonic bombers, the MiG-19PM.
The equipment of the missiles began in 1954. In order that such missiles could become a decent weapon for the MiG-19 is required to increase the height of their use to 15 or more kilometers, and the firing range — up to 4 — 5 kilometers. Moreover, it followed, without making significant changes in the equipment of aviation rocket complex, retaining the basic structural elements. And reserves of the CMM was, in General, not so much because it adopted for this rocket method of targeting carried with them a number of fundamental limitations.
In 1954 the OKB-155 Mikoyan has also developed a project of aircraft carrier — SM-7Ас RP-5 “Emerald-2” and the optical sight ASP-5НВ with four underwing launchers APU-3 to RS-1-U. By results of consideration of the project, it was decided on the final refocus on an improved version of RS-1 and the appropriate means for her guidance.
In the same 1954 in OKB-2 was considered all the possible options for the development of CMM and ways of implementing them. The catalyst for the expansion and intensification of these works was the report on the armament of American fighters guided missiles AIM-4 “Falcon” and large-scale deployment of work in the United States aircraft missiles of other types.
30 Dec 1954 signed a joint resolution of the Central Committee of the CPSU and the Council of Ministers, which required the creation of several aircraft missiles, including the advanced option, in the future the designation of RS-2-U. Development of this rocket was entrusted to OKB-2 PD Grushin.
V. KOROVIN