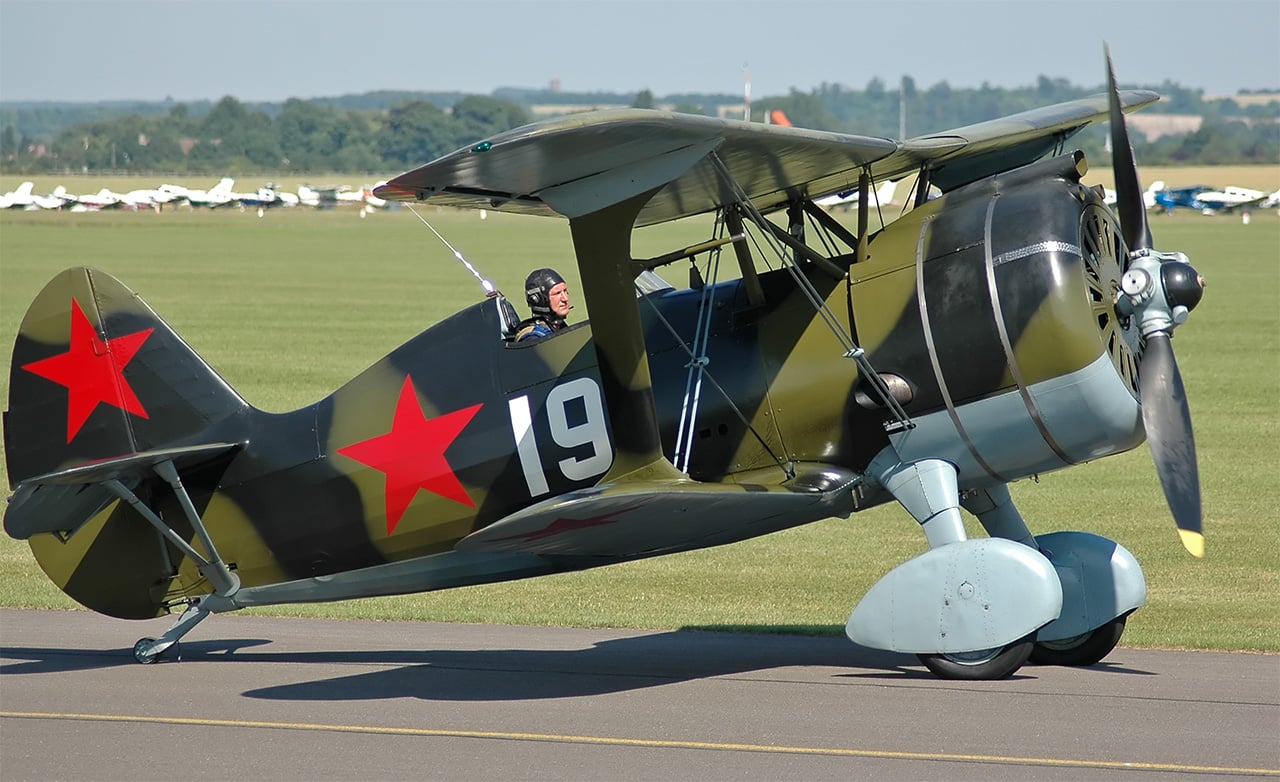 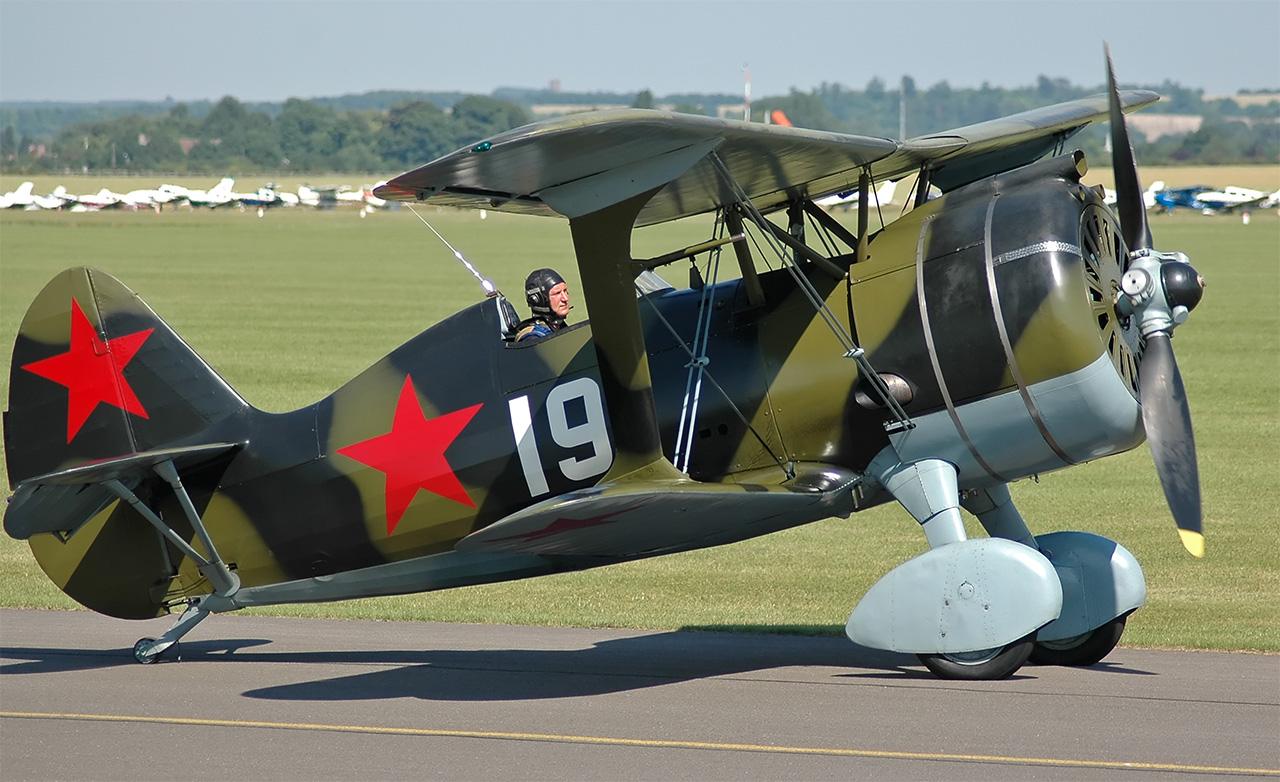 Soviet istrebitel-polutoraplan-15. In the early 30-ies of the last century in accordance with the existing at that period, the concept involving joint use maneuverable fighter biplanes and high-speed fighter-monoplanes, the Soviet Union developed several new aircraft, various aerodynamic schemes. Known aircraft designer N. Polikarpov, who achieved considerable success in the creation of a fighter-biplane (in particular, step I-5), was commissioned by the beginning of 1933 to create a fighter-biplane I-13 mixed design. However, in the process of working on this machine revealed that the traditional concept of the fighter has no prospects. Work And 13 closed, and the design team of No. 3, together with the head of it.Polikarpov connected to the development of all-metal fighter-monoplane I-14 design Sukhoi. 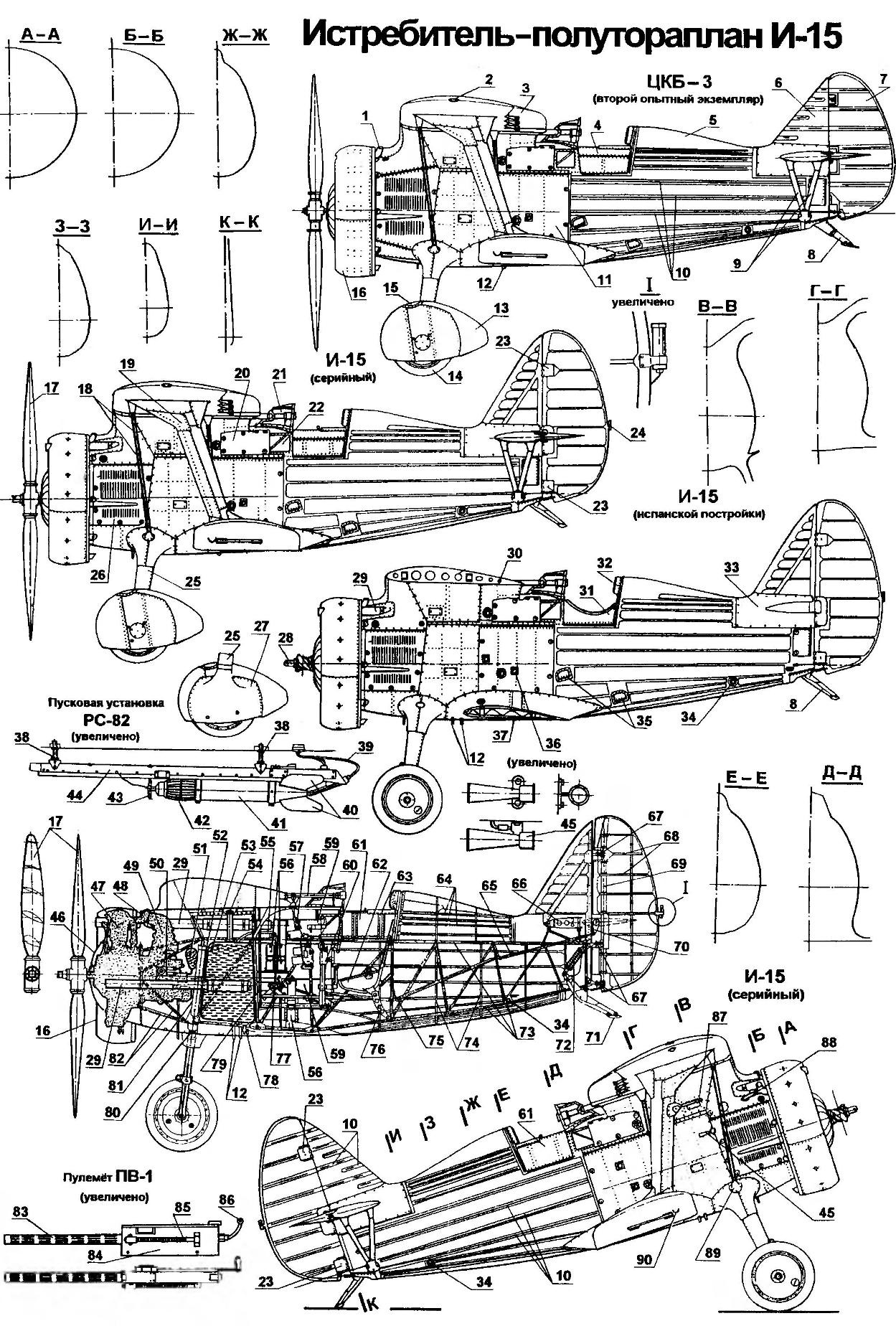 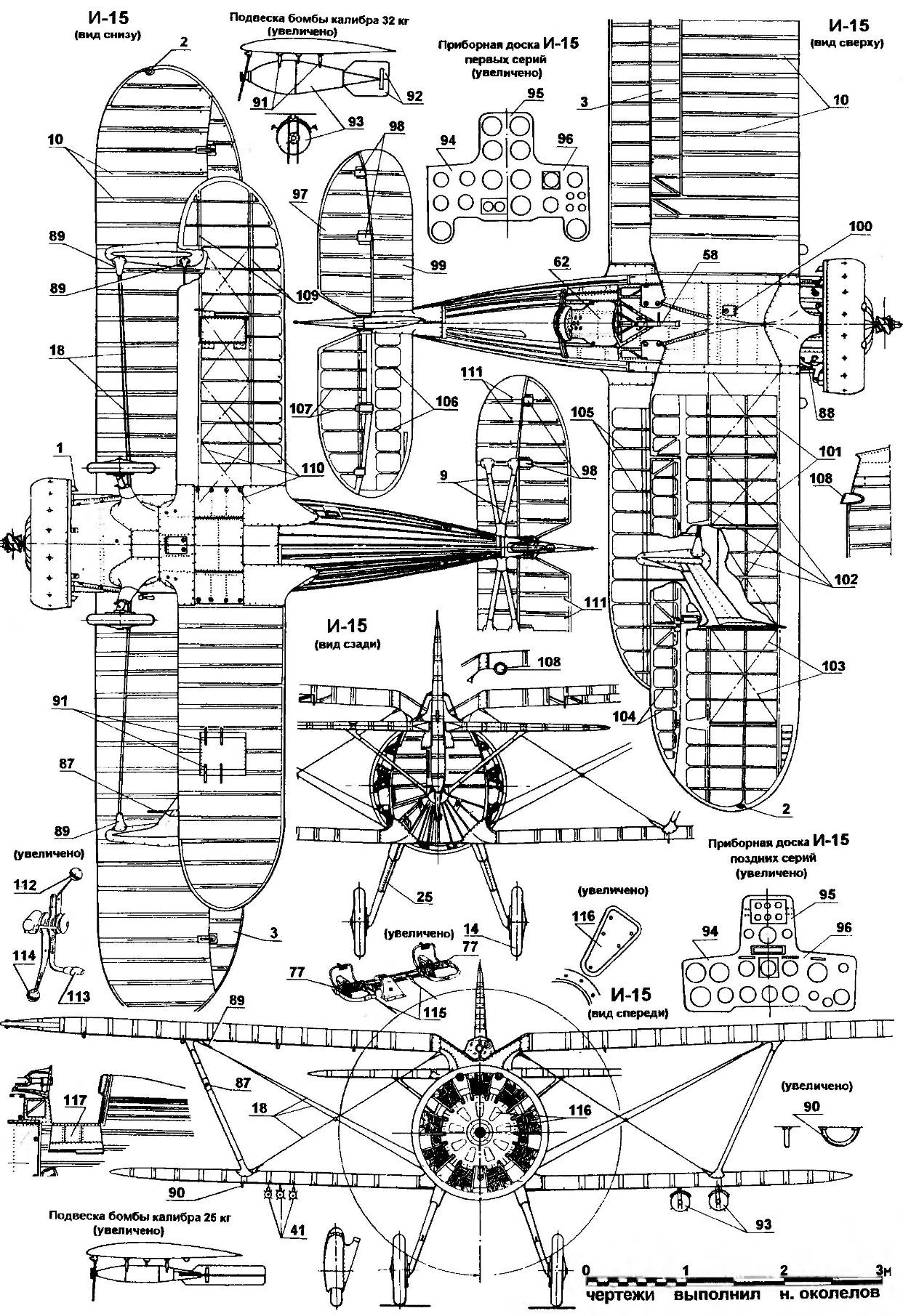 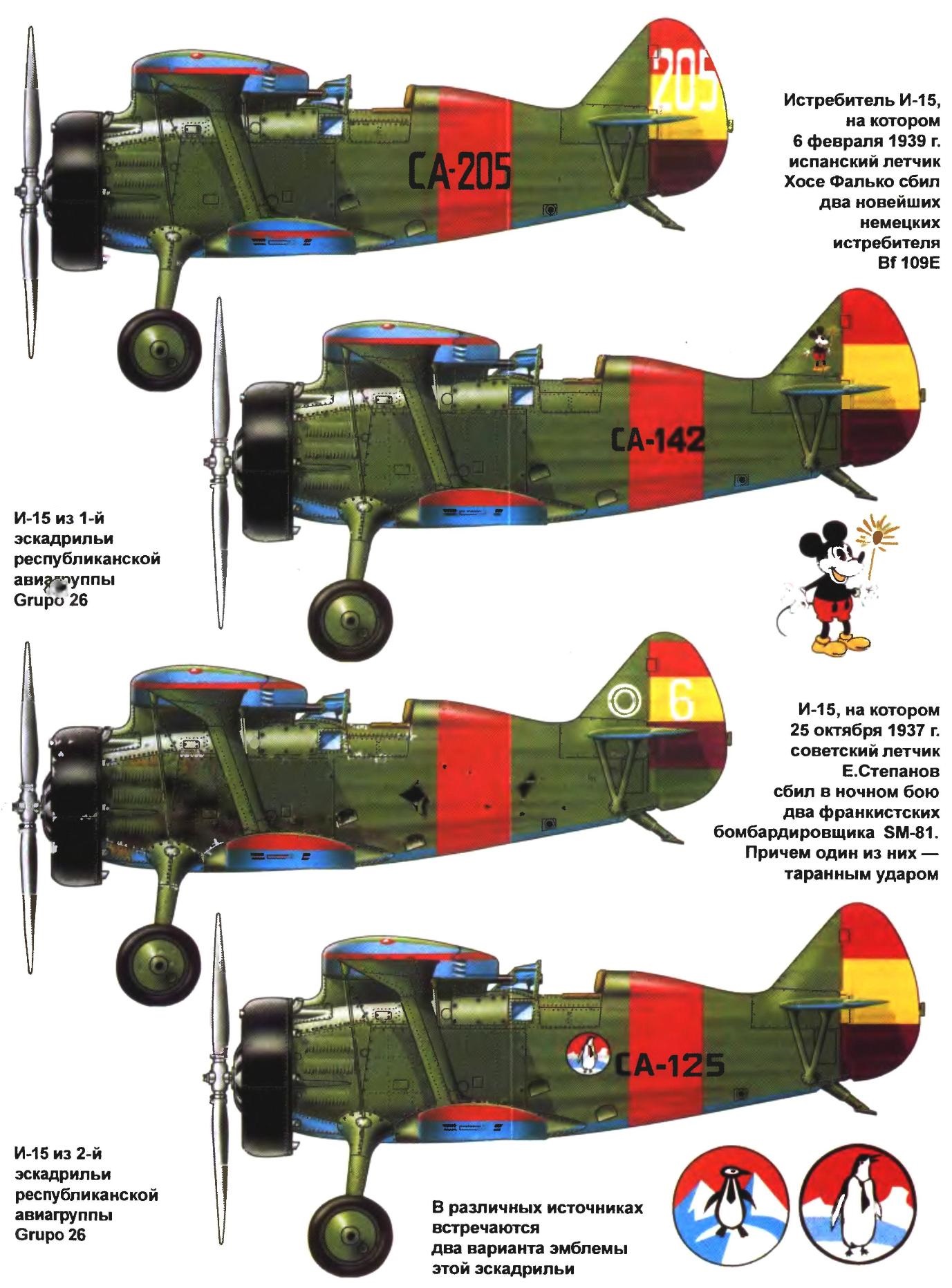 The undercarriage is fixed, cantilever type stand included damping cylinder with the rod, which is welded via a node with a brake disc attached to the axle shaft. Wheels Pneumatics were hiding in dural teardrop-shaped fairings that are in combat units, as a rule, removed. Winter on the fighter mounted wooden skis with braces. Skid was made of steel pipe, it had a rubber cushioning and can rotate simultaneously with the rudder.
The power plant of the aircraft consisted of nine radial air-cooled engine M-22 480 HP or M-25 power 750 HP Propeller all-metal, two-blade, right hand rotation, with the ability to change the pitch on the ground. The screw diameter is 2.9 m. the Blades can be installed in one of three positions: with a step of 3.3, 3.1 or 3.4 meters. Exhaust pipes of the engine are short, curved shape with beveled ends. The cylinder head closed by an annular hood Townend width 400 mm, reduces the aerodynamic resistance of the aircraft. Behind the engine on the fire wall attached to the tank capacity 21 l crankcase front cover small front cowl fairing, protects it from excessive cooling in winter and at high altitudes. To regulate the temperature of the engine in the front bonnet has been installed blinds. Their control from the cockpit. The engine could be run from an onboard battery mounted behind the seat, or from the airfield car starter.
Armament consisted of four synchronised 7.62 mm machine-guns PV-1 with ammunition, 750 rounds per gun. Supply of ammunition — belt. Curb tape cartridge housed in the cartridge boxes. Top guns played for the dashboard in the cockpit and reloaded arms. The side guns are reloaded with the cable runs.
Four bomb racks DER-32 under the lower wing can be suspended up to 40 kg of bombs. Later the bomb load was brought up to 150 kg. From 1937-15 hung six unguided rockets RS-82, three on each lower wing. The starting device is attached in place of the bomb racks. Rockets were launched both single and salvo. The fuses of the missiles were installed on the ground on a certain range of operation.
Flight characteristics of fighter I-15
The scope of the upper wing, mm……. 9750
The scope of the lower wing, mm……… 7050
Length, mm………………………………6100
Height, mm……………………………. 3200
The area of the upper
wing m2…………………………… 15,65
The lower wing area, m2………7,9
Wing loading, kg/m2…………..58,3
Empty weight, kg…………………… 964,6
Normal
takeoff weight, kg……………. 1373,5
Maximum speed, km/h……367
Practical ceiling, m………… 9800
Flight range, km……………….600
N. Food reserve was, A. CHECHIN, Kharkov