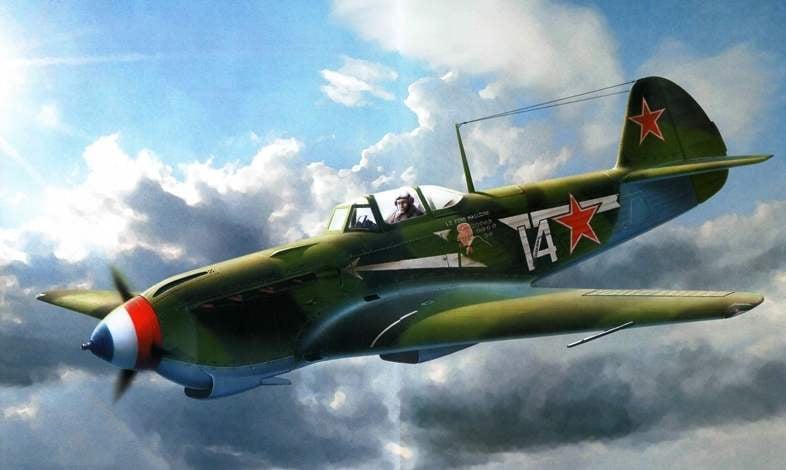 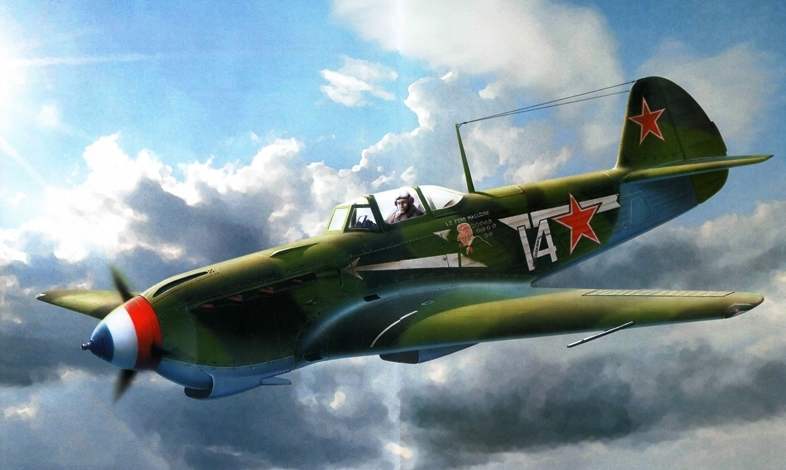 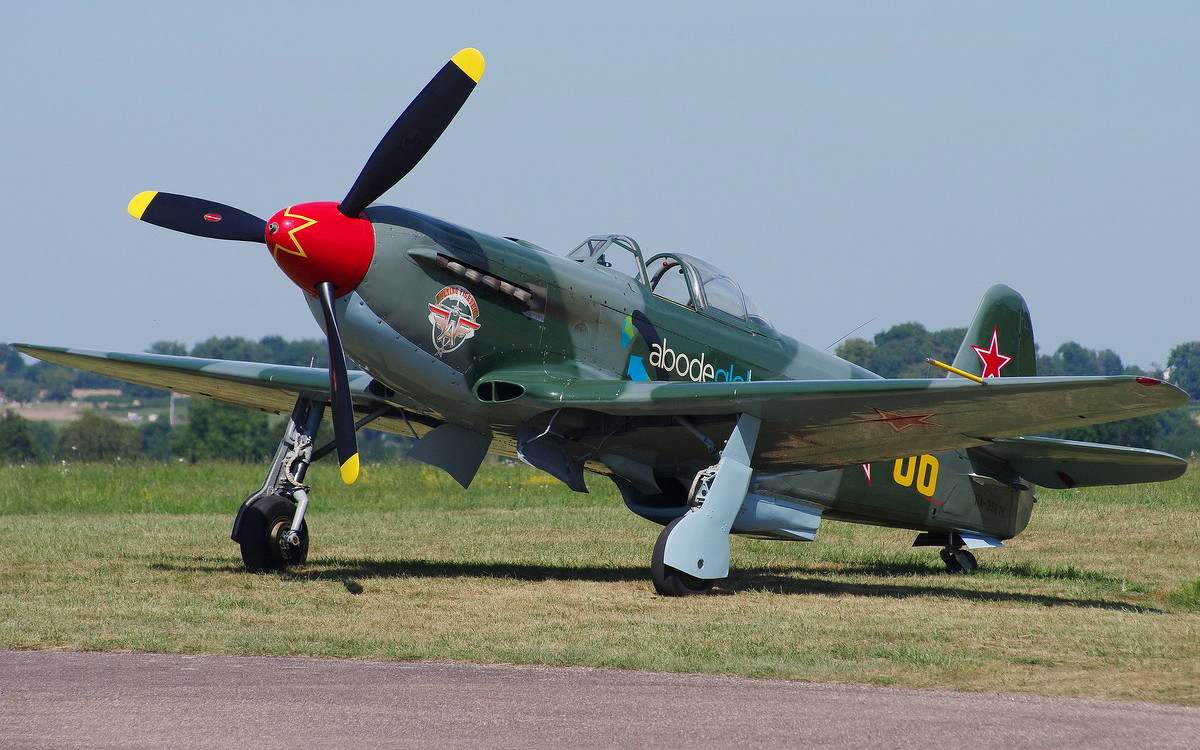 All fighter planes, created in OKB A. S. Yakovlev in the years of the great Patriotic war, represent a further development of the Yak-1. Continuous improvement of this machine led to the emergence of “sub-species”, which closed the Yak-9U with the engine VK-107A.

Engine M-107 V. Y. Klimov suggested in 1941.. however, when it is created has faced serious difficulties, protracted debugging. Only in December 1942, OKB Klimov together with the customer held a 50-hour bench test of M-107 and at the beginning of next year, it released a small series under the designation VK-107A.
After installing these engines on the planes collided with their overheating. Manufactured in that time industry oil and vodoradiatory could not effectively cool the VK-107A on the plane to the desired temperature, the engine is very “hooked up” bonnets.
The first Yak-9 engine M-107A was built in 1942, the Factory tests were begun on the eve of 1943, but the fate of the car was sad.
February 23, the factory test pilot Petrovi, arriving at the aerodrome “Chkalovsky”, the move has fulfilled the mileage and landed. Then the car had to navigate around the test pilot NII VVS P. M. Stefanovsky. In 16 hours the Yak-9 went into the next flight. In the 16th minute of the flight when determining the maximum speed at an altitude of 2000 m the motor broke down. At the approach to the airfield, the pilot noticed power lines, which took place on the border of the airfield, decided to go under the wires with the landing gear retracted, but touched the wing of a snowy hill. In the experimental fighter turned into a pile of rubble.
The Yak-9U with VK-107A was built on the Yak-9T. At the same time borrowed a number of technical solutions of a Yak-3 with the engine VK-105PF.
By the time the VK-107A passed the 100-hour bench tests and developed a capacity of 1650 liters .with. the first boundary altitude (1800 m) and 1500 HP at 4500 m (the second border height). The new engine demanded changes to sub-frame and farm weapon mount. The armament of the Yak-9U consisted of a motor-gun MP-20 and two synchronous machine guns UBS.
Compared with the predecessor, the car was replaced new oil cooler with more heat and moved it into the center section of the wing on the Yak-3. In this shortened tube vodoradiatora, improved external and internal contours of his tunnel and modified lower fuselage panel between the second and fourth frames.
On the lantern of the cockpit appeared the emergency vent its sliding part, and with the visor removed frontal bulletproof glass, making it more streamlined from a full plexiglass. But, as it turned out, reducing the aerodynamic resistance of the lamp, heavily distorted overview of the front hemisphere.
From the Yak-3 also borrowed the back, headrest of transparent armor and nachalbnik, semi-stopper spike support.
Two seven-liter air tank was replaced with one with a capacity of 8 liters Removed loads of weight compensation of the Aileron and 200 mm increased the magnitude of the aerodynamic compensator of the Elevator.
Patched cracks (sealed) in the fire wall, wing, cockpit, rear fuselage, compartments of the tanks and the tunnel cooler. Set the canvas partitions between the wing and the ailerons, making it impossible for the air to flow and, as a consequence, improved aerodynamics. In addition, polished the leading edges of wing and tail, the nose of the bonnet.
In early 1944 an experienced Yak-9U entered the state tests in NII VVS. The leading machine was the engineer A. T. Stepanets and pilot A. G. Proshakov.
In their conclusions, the experts of the research Institute of the air force noted, in particular, that experienced Yak-9U with VK-107A at the maximum speed of horizontal flight, climb and vertical maneuverability at altitudes up to 6000 m is the best of the well-known domestic and foreign fighters.
The maximum horizontal flight speed in combat mode was more land at 76 km/h and at an altitude of 5000 m to 80 km/h than the three-point the Me-109G-2.
Installation of VK-107A engine does not have complicated techniques of piloting. The aircraft remained easy to manage and available to pilots of average qualification. At the same time, armor protection of the pilot did not meet the requirements. Military testers noted the lack of a mirror, making it difficult for the review rear hemisphere. 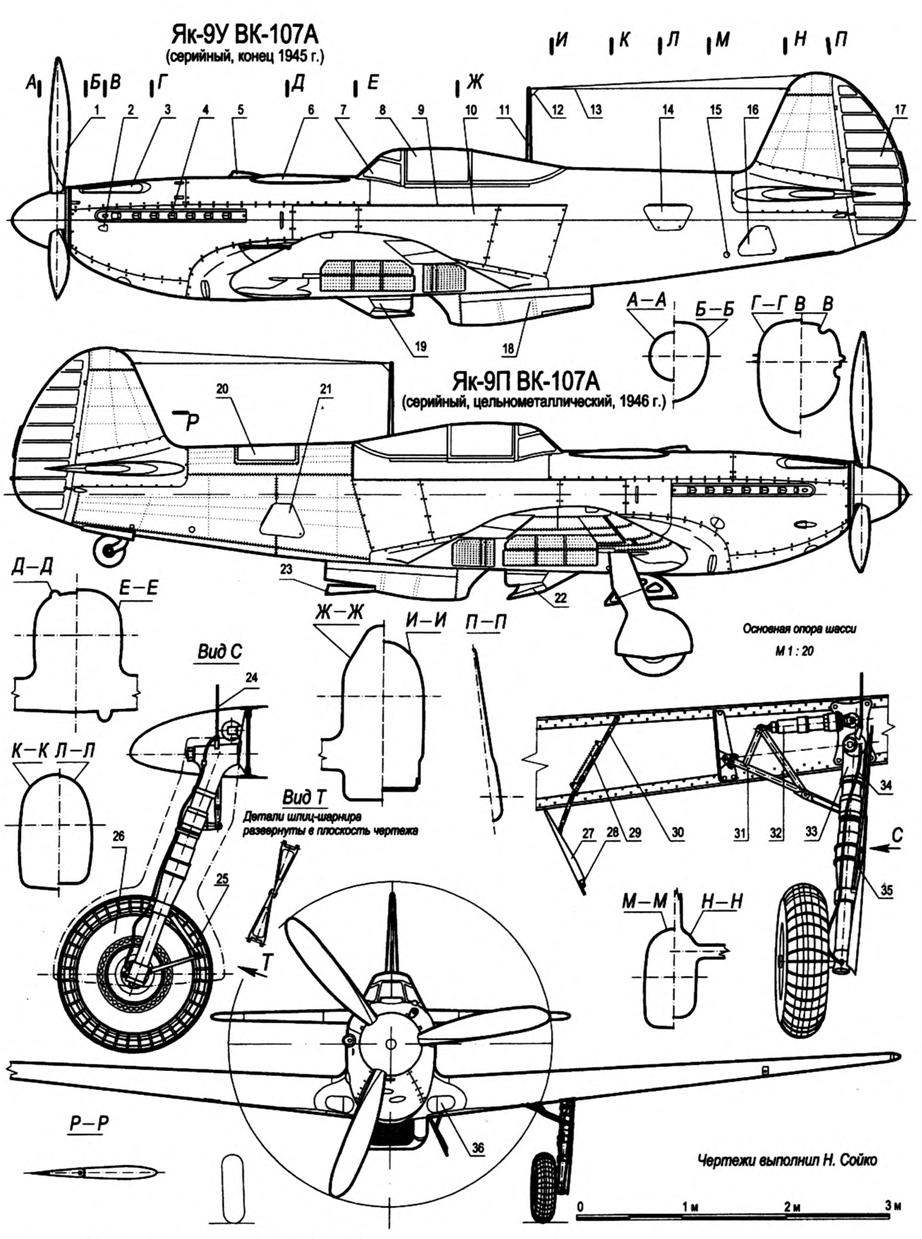 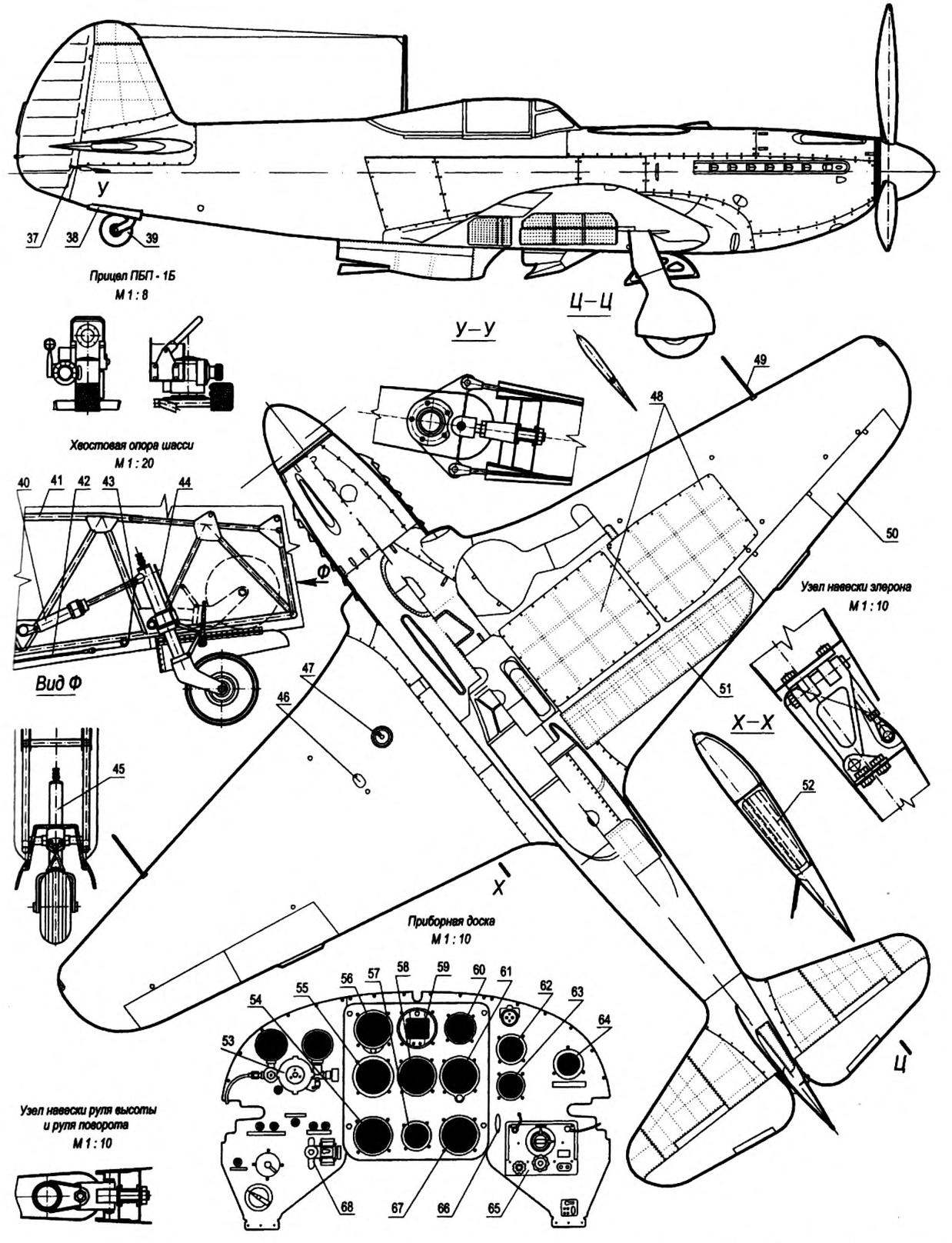 The Yak-9 VK-107A:
1 — VISH-107ЛО; 2 — inlet; 3 — port 12.7 mm UBS machine gun: 4 — exhaust pipes of the engine VK-107A; 5 — cooling air intake heads candlesticks and inside exhaust manifold; 6 — cone of the UBS machine gun; 7 visor lights; 8 — movable part of the lamp; 9 — piano hinge; 10 — aluminum plate; 11 — antenna; 12 — wire reduction; 13 — rope of antenna; 14 — cover battery; 15 — hole in the transport pipe; 16 — maintenance hatch tail wheel; 17 — the rudder; 18 vodoradiatora; 19 — output channel massardier; 20 — radio hatch cover, RPKO-10M; 21 —cover air system; 22 — movable flap oil cooler; 23 — a movable shutter vodoradiatora; 24 — mechanical position indicator chassis; 25-slot hinge; 26 — brake wheel 650×200 mm; 27 — flap wheel; 28 — lock the retracted position of the flap; 29 — spring; 30 — closing mechanism flap chassis; 31 — a “breaking” strut; 32 cylinder cleaning (release) the main landing gear; 33 — spring strut; 34 —air hose wheel brakes; 35 — guide rod plate stand; 36 air intake oil cooler; 37 — pull rudder; 38 — the gunner’s hatch of the tail wheel; 39 — the wheel 300×125 mm; 40 pneumatic cylinder cleaning tail support; 41 — farm fuselage; 42 — a rubber shock absorber; 43 — cable; 44 — cable mechanism, tail wheel lock; 45 — strut; 46 — fuel filler cap wing tank capacity; 47 — bensinger; 48 — dural panel compartments of the wing fuel tanks; 49 — rod LDPE; 50 — Aileron; 51 — a landing flap; 52 — fuel tank; 53 — oxygen device; 54 — pointer boost; 55 pointer speed: 56 — altimeter; 57 — tachometer; 58 — index roll; 59 — magnetic compass; 60 — watch ABP; 61 — variometer; 62 thermometer oil: 63 — voltammeter; 64 — water temperature; 65 — flap control radio RSI-4; 66 — handle reloading machine guns; 67 three-dial gauge (oil pressure and fuel, oil temperature); 68 crane control gear
In conclusion, act according to test results it was noted, in particular: “For faster debugging and commissioning of the Yak-9U urgently needed military and operational tests of the aircraft…”
In February 1944, at Omsk aircraft factory number 166 11 built the first machines. In February of the same year released the first production car Moscow aircraft factory № 82.
In September 1944, the serial Yak-9U with VK-107A and screw VISH-107ЛО came to the test in NII VVS. Compared with the prototype machine it reduced the area of the Elevator, removed the canvas partitions between the wing and the ailerons, Broneslavovich. The front edge of the bearing surface and tail, and the hood of the engine is not polished. The rear bulletproof glass made according to the type of serial Yak-9 with VK-105PF.
Due to the deterioration of the aerodynamics and reduce the engine speed from 3200 to 3000 per minute maximum speed and vertical maneuverability of the fighter, in comparison with the experimental Yak-9U with the engine VK-107A, much worse, but still remained better than the serial Yak-9 with VK-105PF. In the cab the temperature reached 55°C, and the ventilation was absent. Deteriorated and booking, and fully to protect the pilot.
In addition, the range of bidirectional communication with a ground station when flying at an altitude of 1000 m does not exceed 30 — 35 km.
The situation with the quality of the Yak-9 was changed after the war. In September 1946 Novosibirsk factory # 153 military built a series of 30 cars Yak-9 (product P) with the engine VK-107A. “Yakah” this series was needed to eliminate the defects revealed in the course of state tests of two cars in June — September 1946
20 military aircraft series did not differ from previously released. Ten other machines plywood sheathing of the wing and fuselage was replaced by a metal.
The motors are all fighters equipped with device thinning the oil with gasoline, facilitating their start in the winter time.
Armament consisted of two synchronous machine gun UBS and ShVAK cannons.
Start the engine, release and lifting of the chassis, including a tail prop, control flaps and the wheel brakes is carried out using a pneumatic system.
The canopy pilot had armoured glass front and a movable portion with the mechanism of emergency drop. On the pilot’s seat was set back and bananagrowing.
The equipment allowed the plane to operate only during the day in the presence of a visible terrestrial landmarks.
In October 1946 29 Yak-9 was transferred to military trials 246 th fighter air division to form a separate regiment.
The tests took place in February 1947 at the airport Tolmachevo (Novosibirsk), which had two concrete runways.
The maneuverability of the Yak-9 in vertical and horizontal planes is satisfactory. To the height of 6000 — 6500 m all figures (simple and complex maneuvers) in the vertical plane, you could complete the climb. The most advantageous height for air combat were considered range from 1000 to 7000 m. Snap properties were the same as other fighters of A. S. Yakovlev.
Engines during the trials worked satisfactorily. At the same time, were failures in their work and the shaking caused by the low quality of components, in particular of candles.
In conclusion, the act on the military trials it was noted that the Yak-9, built on the model of aircraft, held military trials, may be approved by the air force only after elimination of these defects.
Basic data of Yak-9U with the engine VK-107A 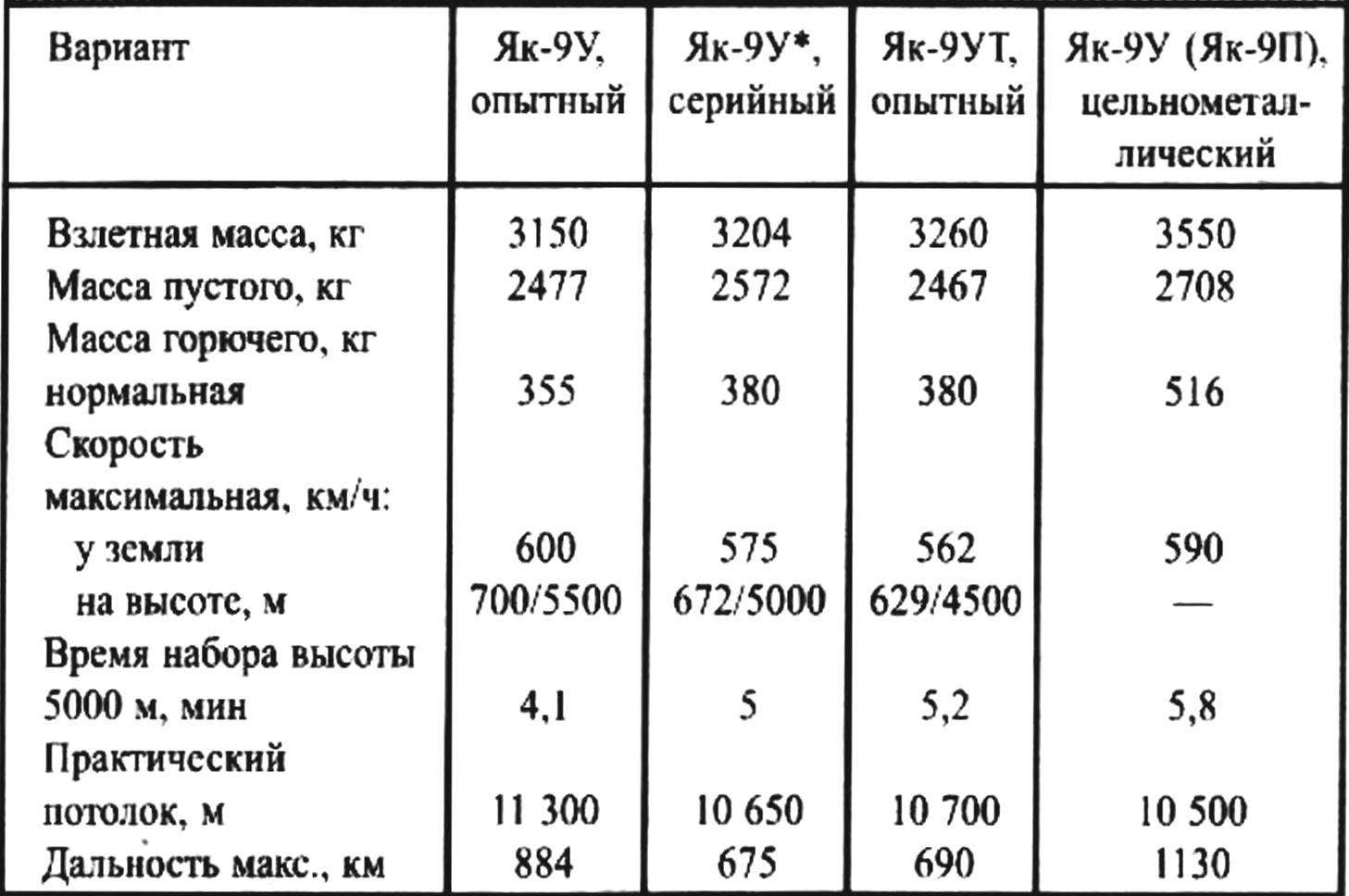 *Flight data is given at 3000 rpm at 3200 rpm maximum speed at an altitude of 5150 m, reached 654 km/h are Common to all modifications of the Yak-9 was: wingspan of 9.74 m, length of 8.55 m and a wing area of 17.15 m2.
After the Yak-9U to the test in NII VVS did the Yak-9UT with the engine VK-107, equipped with a gun of calibre of 37-mm N-37 and two synchronized 20 mm B-20S. The fighter was built based on serial Yak-9 Omsk aircraft plant. The largest machine on the stage of state tests was engineer G. A. Sedov and pilot A. Manucharov.
Testing ended in April, 1945, showed that the fighter, in comparison with the serial, had an almost identical top speed to the second boundary of the altitude motor. His weapons effectively destroy air and ground targets.
When firing weapons the aircraft was more stable than the Yak-9T and Yak-9K with 45mm gun due to lower recoil guns N-37. According to experts of the research Institute of the air force, the Yak-9UT was the need of the air force, and they recommended the car for serial production, but it remained in the category of experienced.
Built on the Yak-9U and Yak spark-9УВ. The exact date of its transfer to the state tests could not be found, but apparently this happened in early August since 12 September 1945 act with their results approved General Repin. The leading machine was the engineer G. A. Sedov and pilot-test L. M. Kuvshinov.
Tests showed that maximum speed double the Yak-9 decreased compared to the Yak-9M with the same engine, due to the reduction of the engine speed and deterioration of aerodynamic characteristics. At the same time, the aircraft flying qualities did not differ from Yak-9U, the load on the arm from the Aileron and Elevator slightly decreased, but still remained large.
Yak-9УВ not stood the trial, and the main reason for this was overheating of the water in almost all flight modes (except the lower) and on the taxiway. Noted and other defects. However, the time that aircraft passed, and he remained in a single copy.
The Yak-9 is possible, although rare, and today found not only on the eternal Parking in the museums and private collections. A few flying replicas of this machine under the designation YAK-9УМ equipped with motors “Merlin” was built on the Orenburg NGO “Boom” and sold to foreign customers.
N. VASILIEV