Flower garden in front of the house or plot is usually round, oval or rectangular bed edged diagonally dug brick. It forms a jagged fence, holding an earth mound from fraying. Meanwhile, a little dream up, you can turn an ordinary bed into an original decorative element of the plot, like the examples offered by the Hungarian magazine “Earmaster”.
Even the traditional round version of growing plants will be look completely new, if those same bricks to place somewhat unusual (Fig.1). They are stacked horizontally in three rows with spaces between them approximately in a half-brick. This edging flower beds can be performed with the use of cement mortar, and without it.
However, the flower garden can become a kind of architectural structure at the site, it is necessary only to continue upward started the process of laying bricks (Fig.2). In this way formed a beautiful lattice Cabinet can be not only round but also square, triangular, rectangular, elongated, any. Flowers in a “skyscraper” planted in the ground filling not only in the middle part, but in the “Windows”, which further enhances the decorative effect.
If you want to use stause-hanging plants, such as nasturtium, morning glories and the like, then the wall cabinets can give without “Windows”, solid (Fig.3), and for a more decorative veneered with colored tiles.
Beautiful double pedestal (Fig.4) of elongated lower rectangle and the higher square, part of the masonry which becomes common (which can be seen on explaining the scheme). Additional decoration here is the final top row of masonry: it is formed of vertically set round tiles (or, alternatively, bricks).
Interesting effect and other features gives the inclusion in the walls of various plates. Thus, the use of a large plate pozvolaet to give the Cabinet the form of a kind vases (Fig.5). To do this, after laying a few rows of bricks overlaps the base of a large plate, and the laying has been going on her, but the increased perimeter. The final series are also chipped tiles.
However, the flower garden can be built and under potted plants, which allows to update it without affecting the basics, just replacing the pots.
Very advantageous to look tall narrow column of bricks at the corners where the walls includes a separate plate-shelves (Fig.6). Tiered, they form a kind of Alpine slide, when exhibited on shelves of different-sized pots with flowers and simple greenery.
Variations of the similar solutions countless. Moreover, the flower garden can turn into combined facility. For example, a flower garden-bench (Fig.7). At its widened base stack plate-seat, and in the center — the narrow column under the florist with the final plate, on which is placed a large vase with flowers. 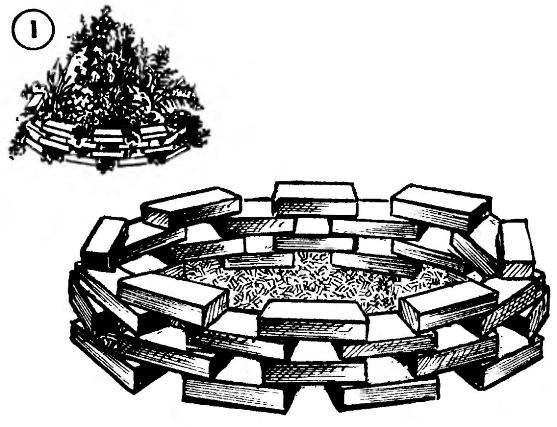 Finally, brick flowerbed do not have to remain the “land”, because there are many beautiful decorative water plants and flowers. For them it is easy to build a flower garden-the pond (Fig.8). The rows of bricks are laid out like a circular flower bed, and before the last row construction inside is lined with a film whose edges am overwhelmed on the wall and pressed the final number of bricks. Remains fill the tank with water and planted water-demanding plants.