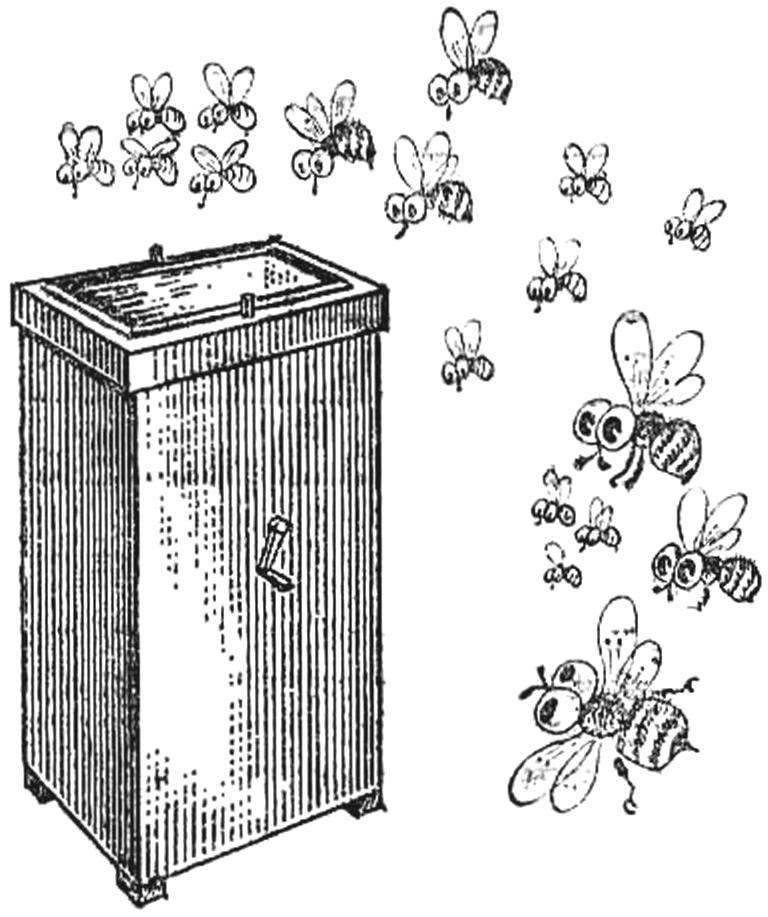 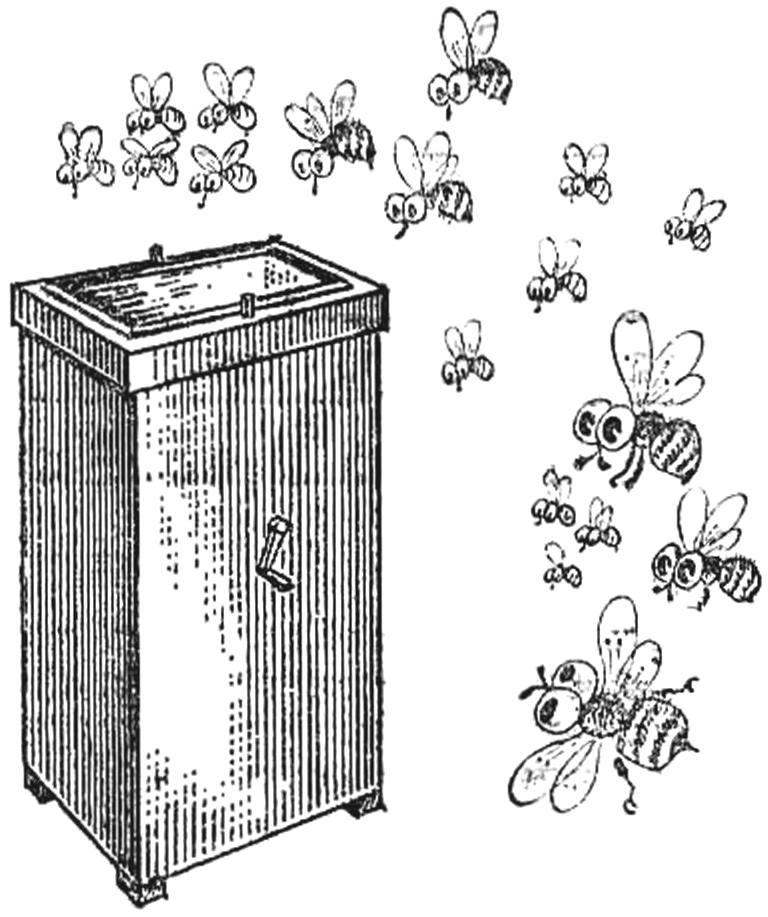 Almost twenty years of experience in the design obsut Chernihiv circle of agricultural modeling. Over the years the students under the guidance of their mentors have designed and built many useful machines, mechanisms and devices, many of which have economic value and bring real benefits to the collective field. One of such devices — a device for the thermal treatment tick bees.
…It so happened that the nearby kolkhoz apiary was struck by the varroa is a contagious bee disease. How to save the hives? Members visited the apiary and meet the requirements of the future plant. Chief among them: should be a full and harmless for bees getting rid of mites.
During our lessons collectively discussed several design options n choose the most successful.
That’s how the bee sauna. The housing (Fig. 1) is a straight parallelepiped, made of five-layer plywood. Top — cover with seal in it is mounted a large glazed viewing window. Inside the housing, the chamber is a mesh drum of cylindrical shape with the shooting end often. Here is placed during the heat treatment of bee family. Below are a kind of funnel for collecting and outputting in a special tray, crumbling under the action of elevated temperature mites. At the bottom of the camera includes an electric thermal element for heating air in it to +42°; the mode is supported automatically by a thermal relay. The course of treatment is monitored visually: two thermometers, mounted in the housing cover.
Primary node installation — the drum (Fig. 2), the cylindrical part of which is covered with steel mesh with a mesh size of 4X4 mm. On a grid of circumferentially distributed six dural blades. Removable face part of the cover drum, fastened to it by three bolts with wing nuts, also has three radially extending blades. During rotation they create air circulation in the chamber. On the same cover and at the opposite end of the drum fixed to the axle, serving as a rotation axis. 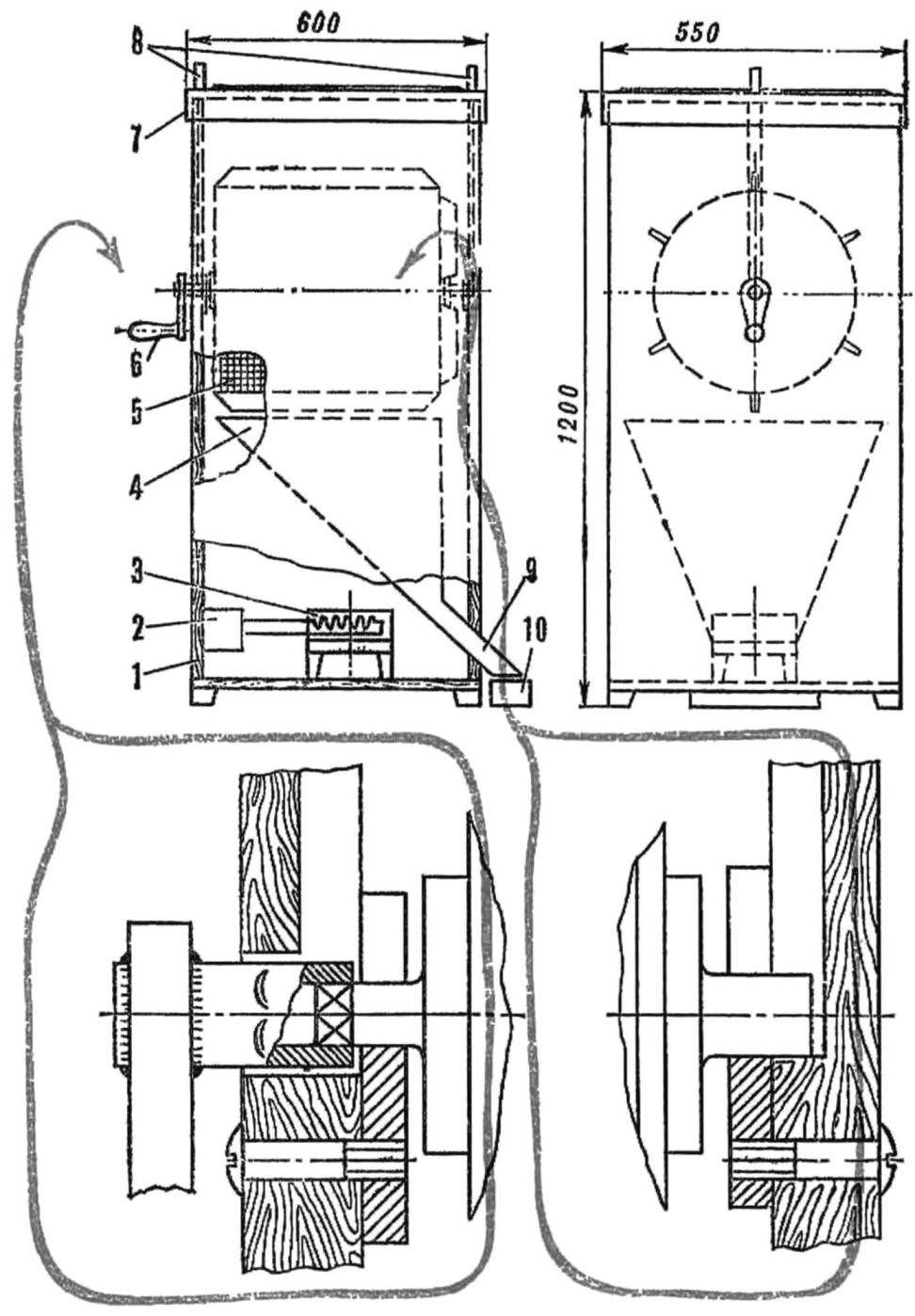 Fig. 2. Drum:
1 — grid, 2 — axle with a square for handle, 3 — blade drum, 4 — blade covers, 5 — cover, 6 — wing nut, 7 — axle of the cover.
How to use the installation? Amazed by the varroa bee colony shake with the cell part in the open drum, the lid and pressed the wing nuts. Lower the drum into the chamber so that the axle slid on vyfrezerovkami in the walls of the casing vertical grooves. The last end over the metallic plates, screwed to the walls of the housing. This slide bearings in which the drum is rotated by a handle inserted in a through hole in the housing opposite one of the axles. The end of the axle has a square section, it is worn on the handle.
Put in place cover with a viewing window and includes a thermocouple to the network. As soon as the temperature in the chamber rises, gradually rotate the drum at a speed of 45-50 Rev/min. been Doing it for six or seven minutes, watching the progress of the heat treatment through the viewing window.
When the precipitation of neutralized warm ticks from the drum will stop the process of “treating” the bees finish. The drum is removed from the housing, the lid removed and a healthy shake out now the bees in their hive.
I. EVDOKIMENKO