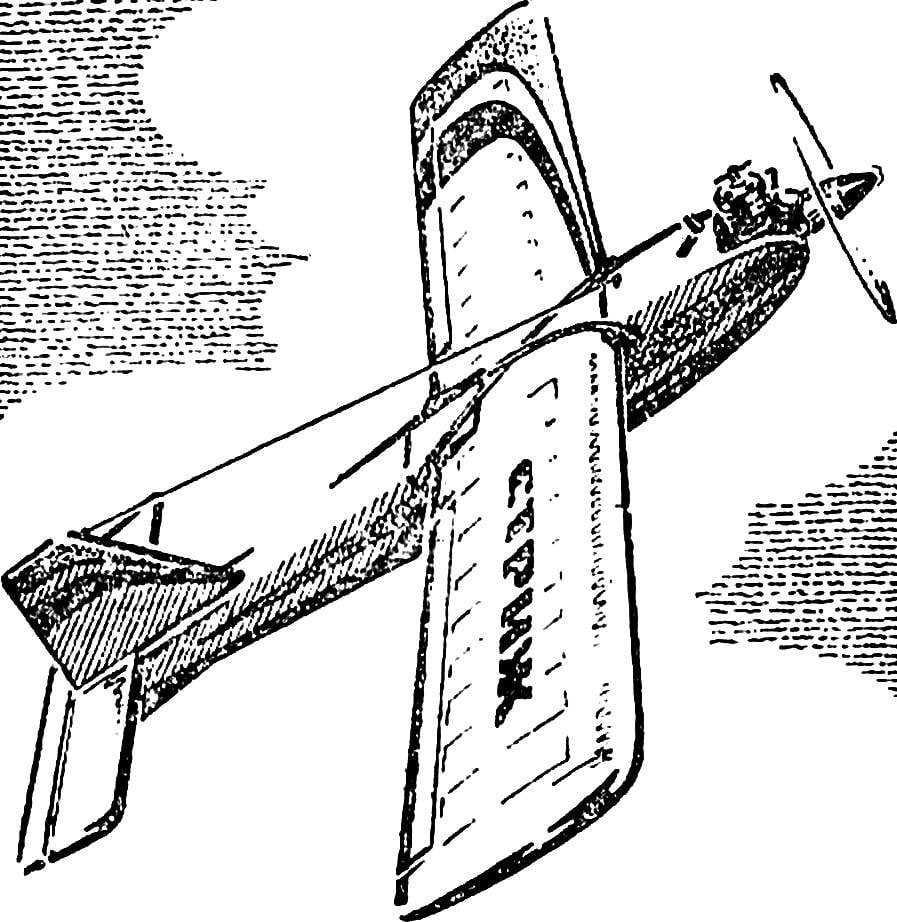 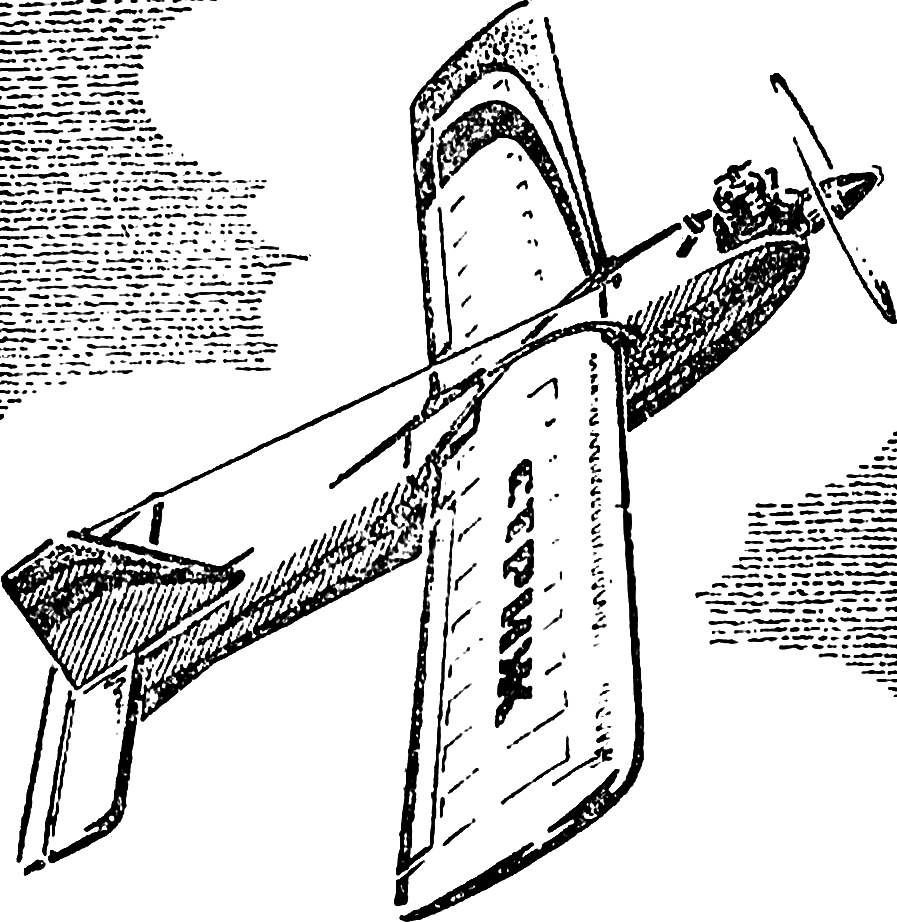 Microgravity class F3A are becoming more popular. However, their production is possible only to experienced modelers. Teenagers need a compact, simple to assemble and easy to use flight model of a simplified scheme under the compression motor small cubic capacity. Initially, we expected it under domestic MK-17 “Junior”, however, due to the low location of the tank the motor was bad possivel fuel, and had to be replaced compression “Meteor”.
To manage selected domestic equipment “ROOM 2” with two channels. The decrease in the number of channels allowed to achieve an acceptable mass models with relatively small bearing surface and the small dimensions of the side piece. With the same purpose the power supply is composed of six welded elements “Uranium” that can be replaced with a battery capacity of not more than 0.5 A*no.
The wing is removable and is fixed on the fuselage with a rubber band, thrown through the fuselage pins.
The ribs are made of plates with the thickness of 5-6 mm of rigid foam (possible replacement — a fake veneer). Front flange and beam flange of planed pine slats and have a section 4X5 mm. the trailing edge is formed by two strips 2X3 mm inset between the plates of lime in the ground of the suspension of the ailerons.
The rigging is a whole, between the shelves of the spar is pre-installed plywood gusset plate defining a transverse angle 3° to the console (the total angle of 6°). The forehead between the ribs is filled with plates of packaging foam, after the adhesive is profiled. Ending — from rigid foam.
The ailerons are a piece of lime the size of 400X23X7 mm. Each is hung on three conventional metal hinges. First the ailerons are mounted the control horns, wire OVS Ø 2 mm Bicycle spoke.
In the middle of the wing from Linden veneer wikiepedia box mates with the fuselage and the area under the steering machine. It should be located as far as possible, as close to the spar. The drive of the ailerons of a conventional circuit, the shoulder of the pig shown in the drawings and with the use of equipment “ROOM 2” in the re-adjustment is not needed.
The fuselage is of mixed construction. The bow of the hard, until the third frame sewn plywood 1 mm thick or a thin fake veneer. The tail portion is stacked, with a soft lining.
Fabrication of the fuselage begins with the Assembly of the side trusses. Then they both connect with a plywood nose piece, cut on the pattern. 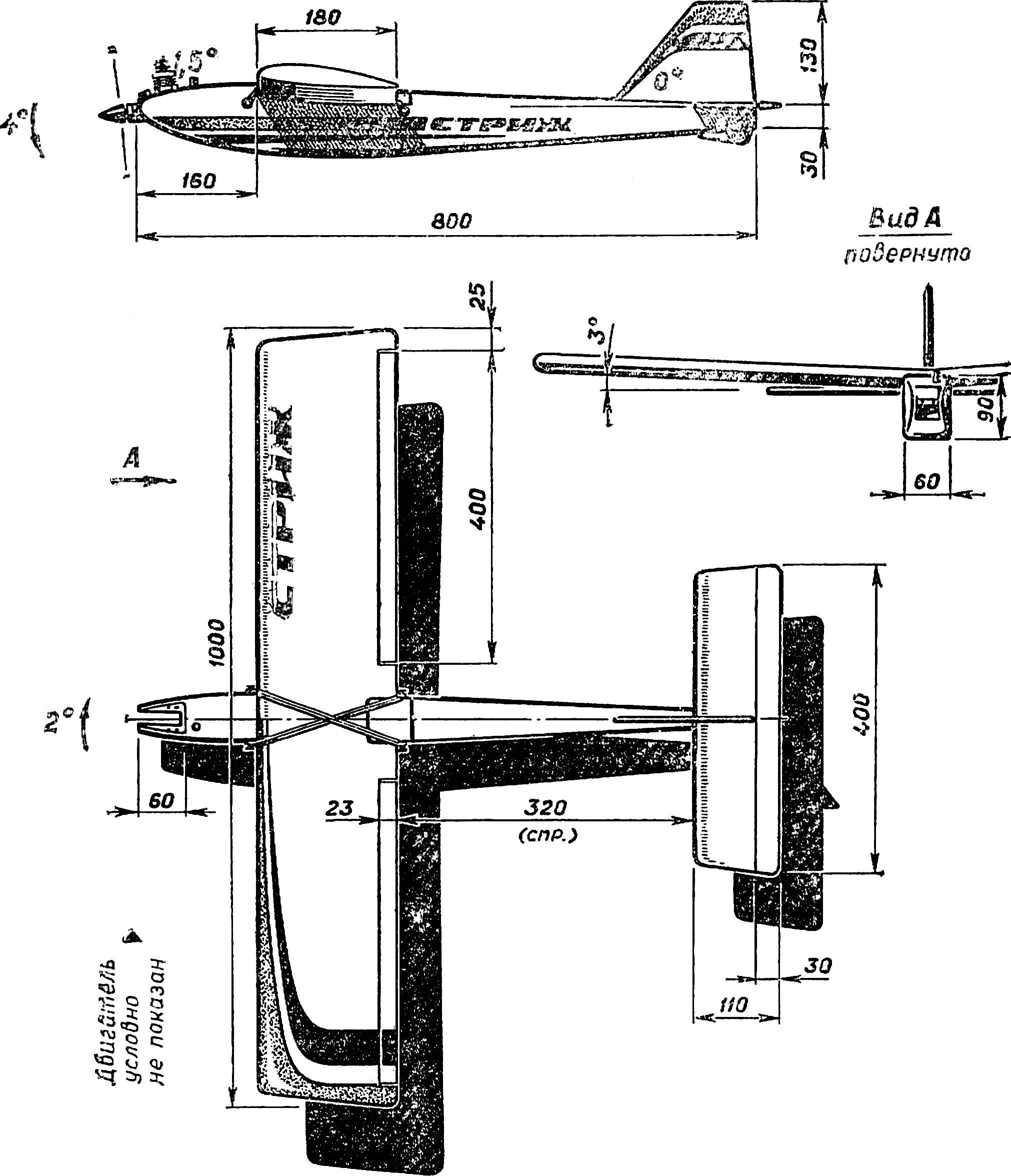 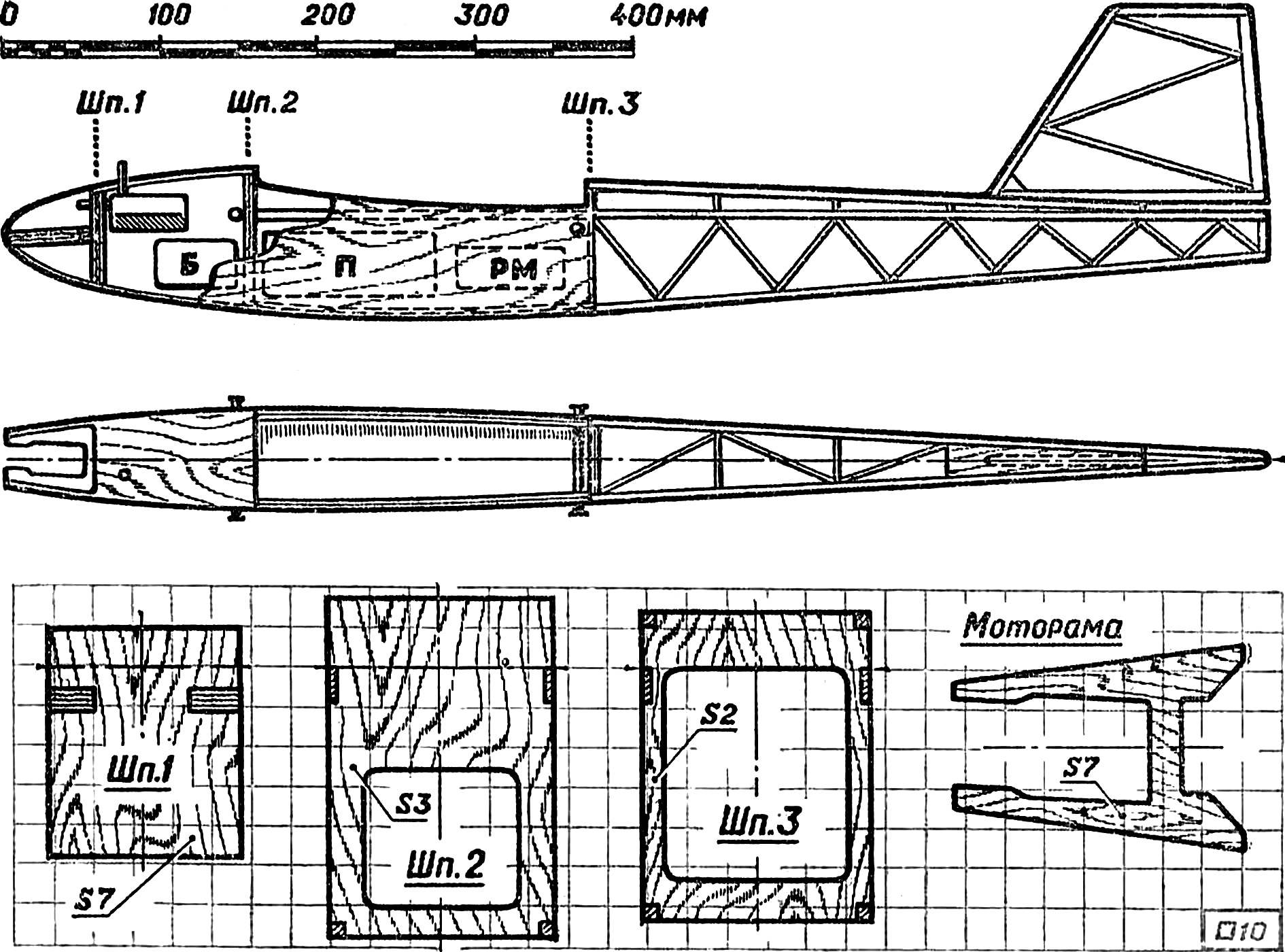 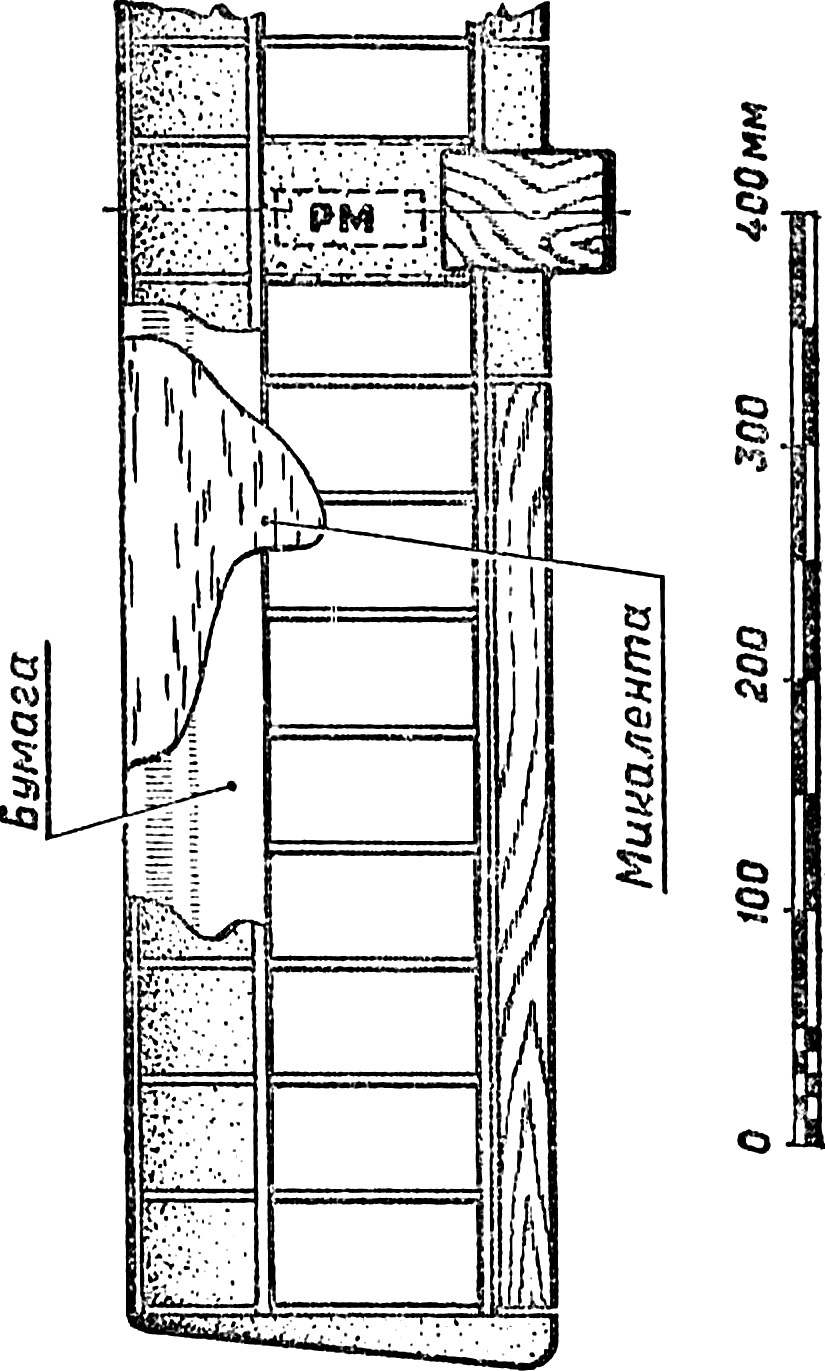 The profile of the wing mated with the fuselage. 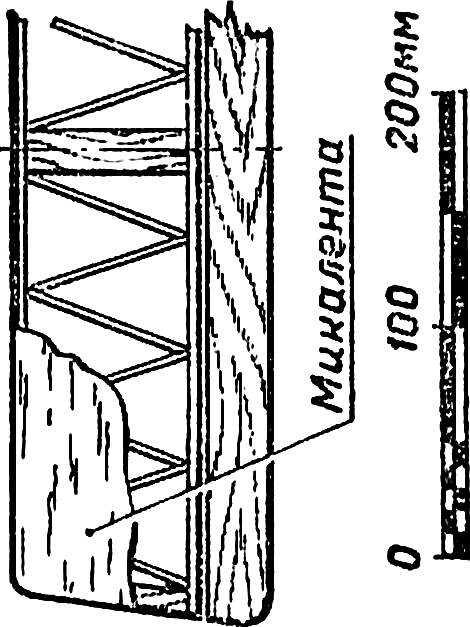 Stabilizer.
Motor mount out of plywood with a thickness of 7 mm, is glued between the “cheeks” on the epoxy. It is necessary to withstand the angles defining Vegas the motor down (engine and 1.5—2.5 cm3 , it is equal to — 4°).
Between the trusses are the frames, the kit rear fuselage is complemented by bridges and braces, Podkrepa area is covered with a fake veneer. Engine mount mounted under a fake boss, and then finished the fuel tank; the whole bow part is also stitched fake veneer.
The fuel tank soldered from tinned sheet metal. Has only two tube — drainage-filling and nourishing. The tank is mounted at the front frame between the top fuselage skin and podyakovo Playground. 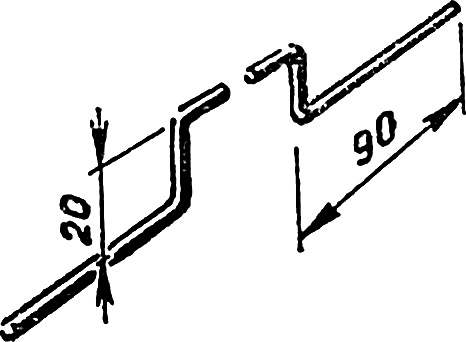 The control horns the ailerons. 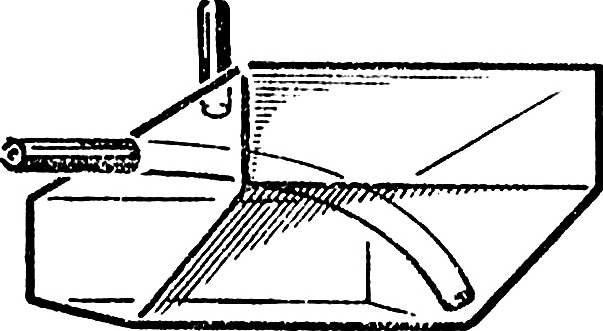 Fuel tank.
The keel is assembled from pine slats with a cross-section 4X4 4X15 mm. It is attached to the fuselage using the holes cut in podkalivat sewing farm under the edges of the set.
Stabilizer in design and materials similar to keel. The Elevator (fake plate) is hung on plain hinges.
Assembly, finishing and debugging. Fully finished frame models treated with sandpaper and painted upholstered macalintal paper. The foam parts are protected from exposure to organic solvents a layer of tissue paper on the liquid PVA glue.
The location of the elements of onboard equipment “ROOM 2” is shown in the drawings. The battery is marked with the letter B, the receiver with two selectors — P, servos — RM. Due to the selection of the location of the receiver and battery can be accurately center the model. The center of gravity of the fully equipped pilot should be in the region of the wing spar or just ahead of him. Engine “meteor” is equipped with a propeller Ø 200 and increments of 100 mm.
At a takeoff weight of 1000 g model has very good flight characteristics. If all of the installation angles of the planes and motor are designed in specified on the drawings the limits microprotein will fly directly, without additional adjustments. Flying steady, “responsive”, vertical and horizontal maneuvers are performed sharply, with good stability. With a stopped engine model plans securely.
The key to high performance is the low takeoff weight. If it exceeds 1200 g, the pilot will become harder (and Vice versa).
Those for whom treatment apparatus, provided with ailerons, will be new, we recommend you first use the flight as a glider, without engine running. Find a low, gently sloping grassy hill and, today, energetically allowed model downwind (in calm weather it can be run from either side of the hill). Resulting from gusts of wind, the rolls are adjusted with a short movement of the ailerons. Although the apparatus and has good stability, it is not recommended to perform the runs without control, and when you plan to touch the Elevator up. The last error is especially characteristic for beginners.
Now you can start to starts with the engine running. So, the motor is started and adjusted. Once again checking the action of the instrument, after a short run model released at a small angle to the horizon. If the pilot will immediately demonstrate the desire to loss of height, short movements of the Elevator to hold it in horizontal flight, at the same time holding roll movements of the ailerons. After the climb, 20 m trying to deploy the microplane due to the tilt to the right, with a simultaneous slight lifting of the Elevator. The latter is necessary, otherwise in the absence of experience is easy to “dump” the model into a spiral. After finishing a turn, the rudders return to the neutral position.
You need to consider that when flying against the wind manifested a slight tendency to climb.
V. GAIDUK, g. Novograd-Volyn, Zhytomyr region.