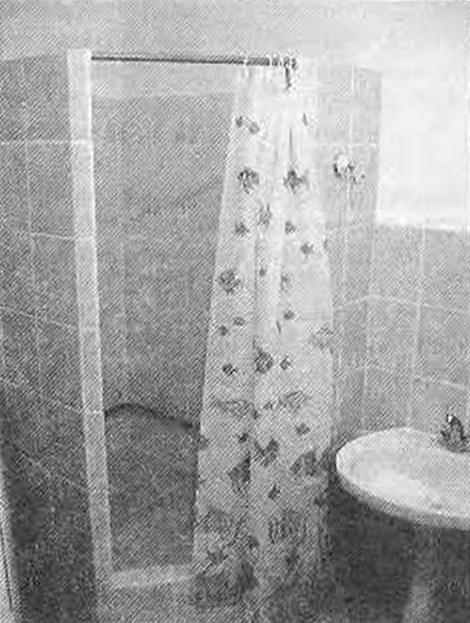 For water treatment there are many different devices. In Russia we have a traditional of them is bath, bathtub, shower. The people noticed that the bath treats, bath — relaxing, but invigorating shower. Besides, a shower is the most rapid form of bathing, which does not require any special preparations. In my view, it (the shower) and the most economical of these. Here I am, having a bath in the garden tub and in the house he decided to shower and use the tub as a sump. But the tub was already old, and on “family Council” decided that this version of us is not so necessary. Just need one soul, arranging him in the bath — in the corner of the boiler house extension to the house, where there was a gas boiler. It’s warm even in the bitter Siberian winter, besides eating and sanitation.

The preparatory work consisted of dismantling the old tub and the acquisition of missing materials. But I must say that both were not big problems and work. 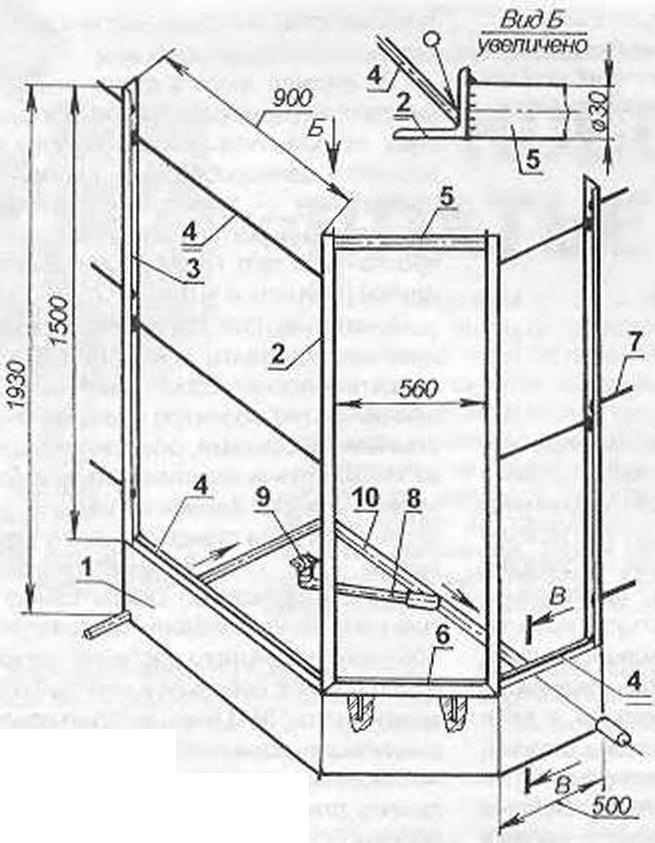 Getting device shower enclosure, first determine its architecture. Especially wise is not, however, from the simplest overexposed “cubic” form, decided to depart and made it the front corner (there where supposed to arrange the door) beveled. And I think that it has paid off. In addition to the more attractive appearance of the cabin, the absence of angle has facilitated access to other equipment of the boiler house, in particular, to gas fired boiler and electric Titan.

Before starting construction works directly on the floor tiles boiler marked the location of the partitions in the plan, but rather a Foundation under them. However, this clutch of four rows thickness of a half-brick Foundation-that can be called only conditionally, because the basis for it is not the ground and the floor of the boiler room. Name this part of the cap — this name is probably more suitable for such constructions. 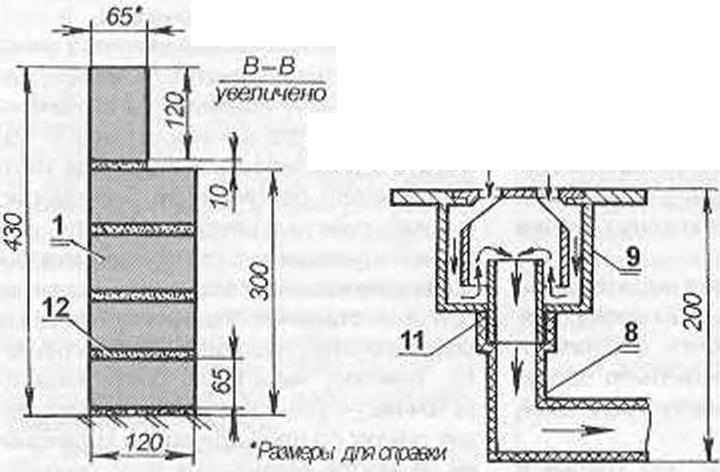 Laying out the base, begin/t to install “ladder”. Sailors mean by that word the ship’s ladder, but the construction of an underground device for the collection and drainage of the drain waste water. “Ladder” consists of receiving hopper and the discharge pipe. The funnel has a protective grid against the ingress of large debris and siphon-hydraulic valve reverse the penetration of odors. During the installation of “ladder” it was important to observe two conditions. The first is to put the outlet pipe with a slight slope towards the drain. The second is to set the mesh of the funnel at the level of not yet existing clean floor of shower cabin, high lift which was undesirable. The free end of the nozzle is docked with the withdrawal of sewer pipes which previously have connected the goose bath. The direction of withdrawal, and accordingly, connection of the ladder towards the sewer pipe — the floor is quite an acute angle to the water flow in them smoothly merged, not “resented” each other. 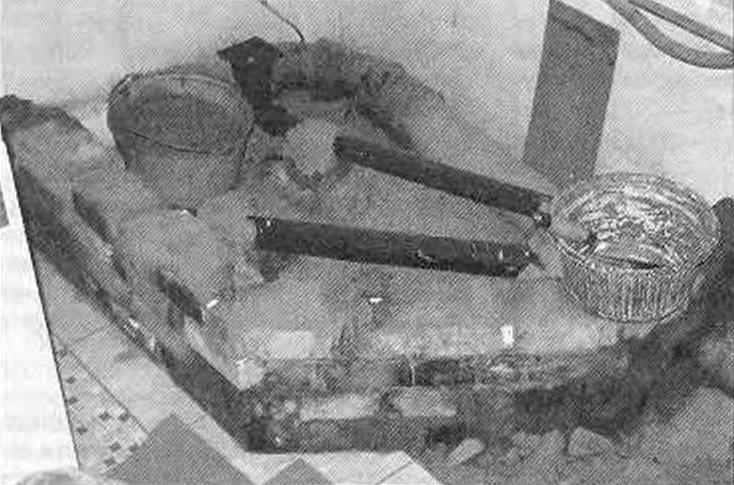 After that, the entire volume between the basement and walls “zebutal” filled with broken bricks, rubble and other construction waste, and then shed all this weight “skinny” cement mortar (with the content of the binder is approximately 1:10 1:12). At the top, the entire area of the cabin, staged a “screed” — dropped 20-mm layer more robust solution by adding a silicate glue, and even sprinkle it on top of the cement and “salesny” — smoothed the surface of the steel Falcon. Screed performed with a small slope (or rather, uphill) from the “ladder” to walls and partitions, leaving him towering millimeters by 10. 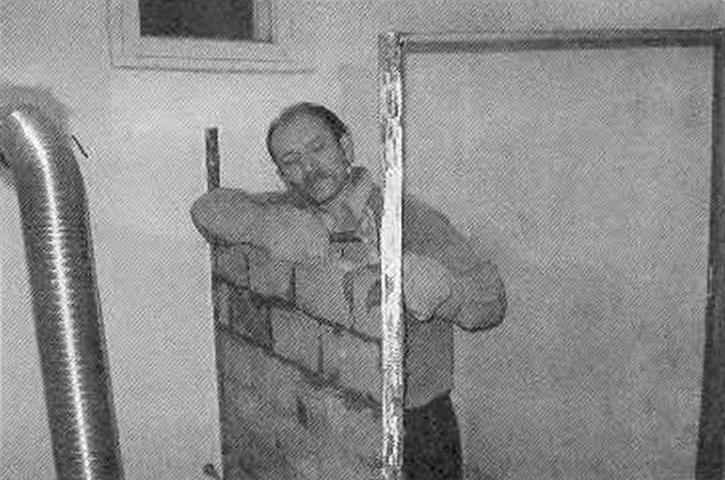 Then waited a few days, the solution of “backing” and ties during this time grasped, gained strength, and it became possible to step on it.

Since the masonry of the walls, laid on edge, only a single row of bricks. Then he mounted welded frame consisting of a frame access opening, wall racks and the connections between them Stands (wall and frame) is made of rolled steel angle No. 7, the sill of the frame — area No. 3. The lintel stainless steel frame (tube diameter of 30 mm). Connection — cuts reinforcing wire with a diameter of 6 mm.

Wall racks, after adjustment of their vertical position, nailed to the walls steel hardened anchors through pre-drilled in the corners of the holes. Same dowels fixed sill frame on the underlying bricks, which are also pre-made proportionate to the nest. Stand (wall and frame) are connected by links, and the bottom is welded immediately tightly, and the middle and upper initially only tack-welded. In the course of masonry walls were detected, whether their position with the mortar joints. If it matched, I welded them completely, and if not — then chopped off the oven mitts and dropped the connection to the nearest row of bricks. 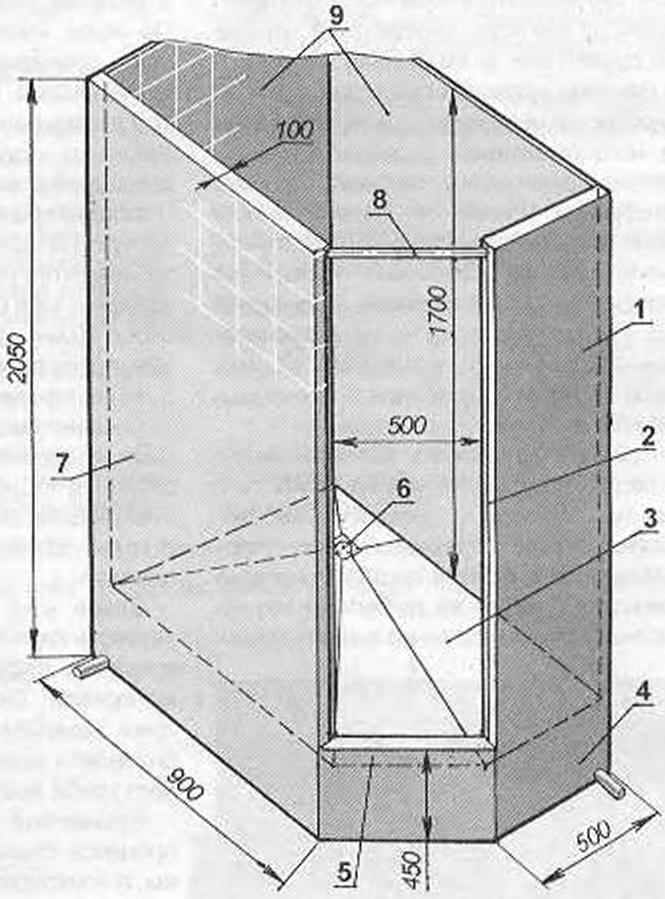 Masonry is produced in a quarter of a brick to the level of the lintels of the doorway in the cement-sand mortar in the ratio of their mixture 1:5 with a thickness of about 10 mm. Cement used 500 brands, sand sifted from the large (over 5 mm) inclusions.

The quality of the seams is not particularly cared, but the outer surface of the walls trying to equalize almost to the planes that it simpler and easier to coat the cubicle tiles.

Here I want to note that laying of quarter bricks allowed to almost halve the consumption of this expensive material. Because the price of one brick even low quality is now close to the cost of a loaf of wheat bread flour. 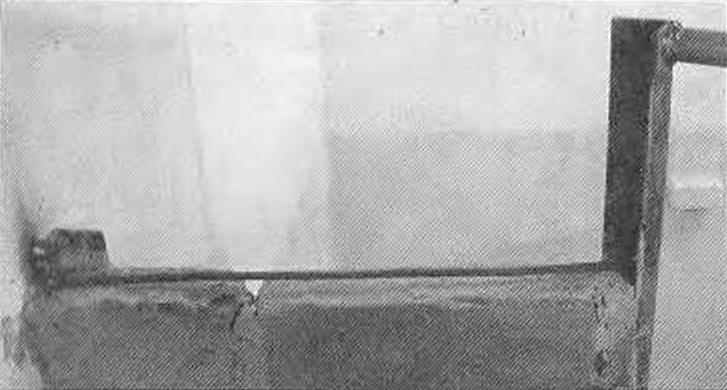 Continuing the story of the future the process of building a shower enclosure, and specifically about the wall partitions and related to the frequent cabin walls, I note that when you purchase tiles for the floor and walls was able to pick them up by the colors. The size and texture they are different: for wall — 300×200 mm and smooth, and the floor — 300×300 mm and rough.

First decorated the cabin floor, keeping the drainage slope to the “ladder”, and then walls and partitions. After covering the uprights of the frame a tile width of the input aperture was 500 mm.

To describe the technology of facing of floors and walls with tiles, I think there is no need — the literature on this question abound in libraries, and in book selling. I will mention only a number

First, the wall height was not multiple of the tile sizes in the same row had to be cut. This number was considered appropriate to put at the bottom — there is rarely appraising look, and when bathing is just not up to it. Columns incomplete tiles “herded” into corners.

Second, for lining recommend the use of special glue, which is a fine cement-sand mixture with special additives that gives it increased flexibility and water resistance. What exactly is a word, although the price is much higher. 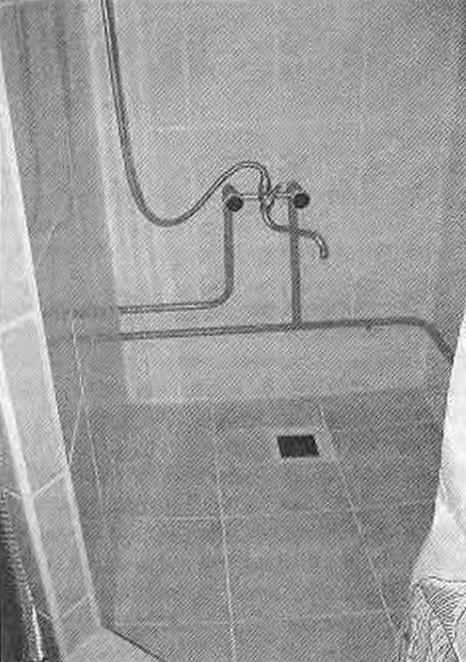 I used a mixture of self-catering, consisting of ordinary cement mortar, and shuts the water with the additive in it polyviny-lateralnogo (PVA) glue, which gives the mixture of these qualities.

Thirdly, the lining of the floor to lay the tiles were started from the “ladder”, flush with it. trying not to leave voids under them, may enter and stay water. This distributed solution is the glue evenly and abundantly, and in the center added a “bump” and laid the tile “to place” him with a punch. Click on the tile it tried with both hands for maximum area. To see the emptiness, of course, impossible, but to feel (or rather hear), tapping the tile area after installation it in place. For this manufacturing operation to fabricate a simple fixture plate with sides slightly smaller than the tiles, and push through it. But you need to ensure that between them have not got the solution.

After lining all seams are sealed with special water-resistant non-shrink grout, and on the lintel of the doorway hung a beautiful plastic curtain.

Mixer left one that had served the bath, but the water heater was the problem choice: leave the existing heater or buy a gas column. I stopped on the first variant. Besides — an alternative fuel in case of interruption in gas supply.

Shower partitions in a half-brick, tiled:

A 3—floor, covered with Sandstone plates with gradients from walls and partitions to the ladder;

9—part of the walls of the room ceded to the shower tiled.