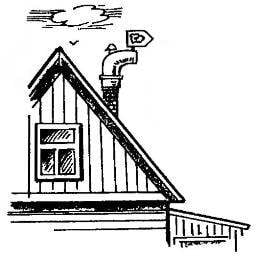 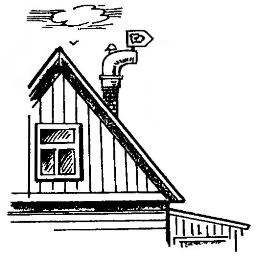 The owners of the houses with stove heating know how difficult it is to melt the cooled furnace (fireplace or heater), especially in rainy windy weather. Will pay in the truest sense because the smoke at first is often not the pipe, but rather into the room. This problem is especially relevant for those owners of garden and country houses, which are frequented there in the cold season only as needed.
Out in the presence of electricity with the help of vacuum cleaner and cut the curved steel pipe of suitable length and diameter, which must be installed inside the trunk of the chimney with the release of its lower end through the wall, as shown in the figure. When emptying a vacuum cleaner at the top of the pipe of the air flow outside, will create a vacuum and thereby increase traction.
But if the electricity is not fed or house cleaner is not stored, it is better to resolve this issue once and for all.
Will help in such a situation, simple design, called the cap, which contributes to traction even in cases where the pipe provides a suction of smoke due to insufficient section of the chimney, the low elevation of the pipe, the excessive number of channels in the rotary kiln, connecting to the pipe multiple heating devices, etc.
The cap works on the principle of the ejector, successfully performing the tasks of other exhaust devices, but it does not consume electricity, as a fan exhauster, and is not blown by the wind deflector. In a strong wind performance of both alternative devices is reduced, the cap, by contrast, begins to function more efficiently. 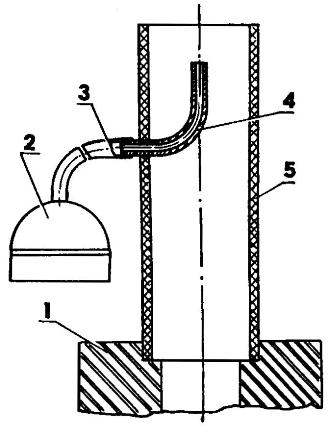 The scheme of increasing the chimney draught with a vacuum cleaner:
1 — oven (fireplace, stove); 2 — vacuum; 3 — hose; 4 — steel pipe; 5 — chimney
The installation of such structures are possible at the outputs of the ventilation channels to increase air exchange.
The cap is mounted on the top of the chimney, which usually set the umbrella, which in this case becomes unnecessary, as this design is, in addition, prevents the smoke channel not only from direct precipitation but also protects against driving rain, because the outlet is always situated on the leeward side.
The main part of the vane is rotatable cap in the form of fillets (quarter circle) of annular section, which is mounted on the axle by means of two bushings. The top bushing is welded (soldered) directly to the outside of the cap, and the bottom is connected to the three spokes on the inside. The cap is made of thick galvanized sheet, axle and sleeve — steel. The axis of the device has a shoulder, on which rests the lower bushing of the cap. The upper end of the shaft protocel, and it is threaded. After mounting the cap on a thread is screwed a cap nut.
The axis mounted vertically in the center cylidrical pipe with spokes, welded at two levels.
The pipe together with the terminal from a steel tube with an inner diameter equal to the outer diameter of the chimney, on top of which is mounted the cap.
The hood on its top attached to the vertical stabilizer, which provides the position of the output hole a cap always to the wind. This detail may represent a variety of shapes and serve as a decoration of the pipe, giving a certain individuality to the house. 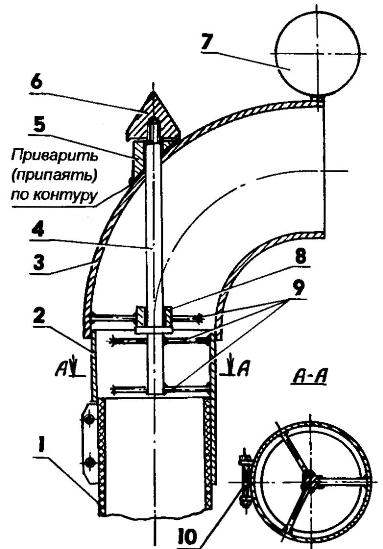 The cap:
1 —asbestos-cement pipe; 2 — pipe with the terminal; 3 — hood; 4 — axle; 5 — upper bushing; 6 — a cap nut; 7 — stabilizer; 8 — lower vulca; 9 spokes; 10 — bolt
The General structure of the cap is clear from Fig. The structure dimensions and the dimensions of its parts are determined locally.
The easiest way to install the cap on the round, for example, asbestos cement pipe, which is currently widely used in furnaces not only the garden but also houses, as they are quite easy and do not require separate foundations or strengthening furnace. Moreover, the inner surface of these pipes is relatively smooth and provides a smoother smoke without any turbulence. 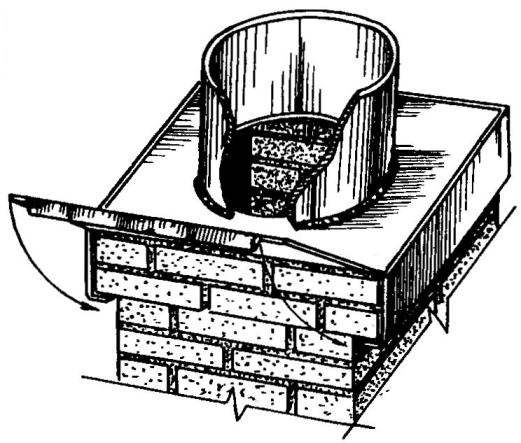 Adapter brick chimney
If the pipe is a brick, you have to make a steel adapter, which will move from its square or rectangular to round, and securely attach it to the top. Then, on the cylindrical part of the adapter to mount the nozzle and tighten the terminal or even, go around without this part, privaris the spokes of a vane directly to the cylinder adapter.
V. KORNEEV, Rybinsk, Yaroslavl region.