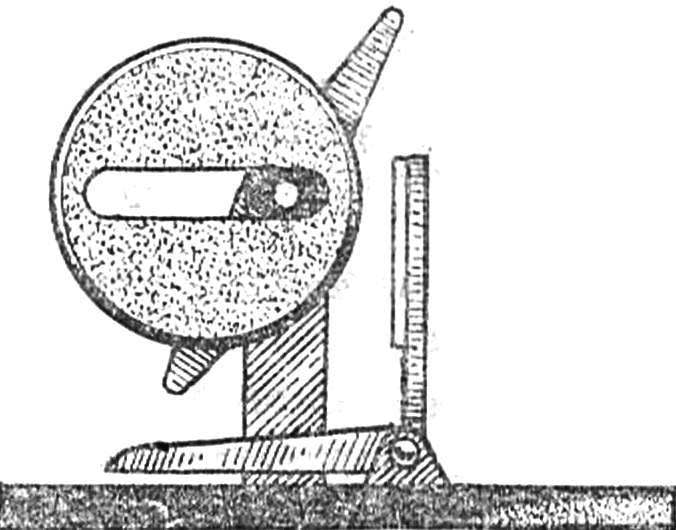 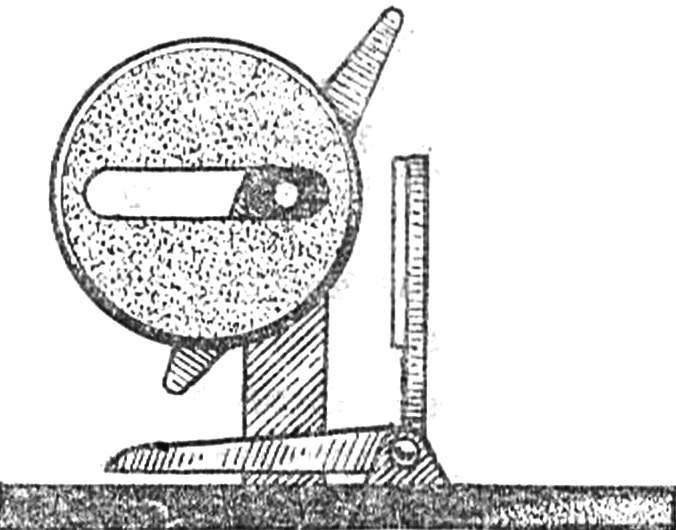 On the mechanisms used to its movement due to inertia of the rotating imbalances of the journal “modelist-Konstruktor” wrote more than once (see number 5 and 12 for 1975, No. 6 1976, No. 3, 1978). The publication aroused great interest among readers, so we return to this topic. The amazing ability of nutricola, or inertsioidov, as they are called — to move without using wheels, tracks or air screw — continues to captivate enthusiasts-inventors. And although the effectiveness of this type of propulsion is not yet well-known competitor, perhaps one of the most perfect models of nutriton will be a prototype of the future transport. And while we offer to your attention another scheme inertsioidov mover. Its author — kas reader from the city of Ryazan Alexander Mikhailov.
The principle of the movement, many of nutriton based on the characteristics of the housing or the supporting surface interacting with the environment: in the direction of motion the resistance is less than in the opposite.
If such a case pin rotating with eccentricity or load imbalance, the force of his inertia will periodically cause the apparatus to move in the direction with less resistance. However, the centrifugal force at a given speed of the shaft has a constant value, and the direction of change in the selected coordinate system strictly according to the sine wave. So exactly half of the turnover of the inertial force opposes the motion and useful work can not commit.
So I set myself the task to create a mechanism with asymmetric cycle in which the inertial force of the rotating imbalance are transmitted to the body in the form of short, energetic pulse, while the opposite (non-working) during a few extended time. This will allow the use and features of the reference surface of the housing, and the property supports itself. It is known that resistance to starting is higher than when driving, so the short working momentum that can overcome this “barrier” that pushes the system forward.
To understand the principle of motion by a simple example. Put on your skates and get on the ice, holding some cargo. If you suddenly take it away without letting go of hands, you move in the opposite direction. Now gradually bring it closer to ourselves: if the inertial force in this case will be less friction on the ice, you will remain in place. By repeating these operations, you will be able to move on. 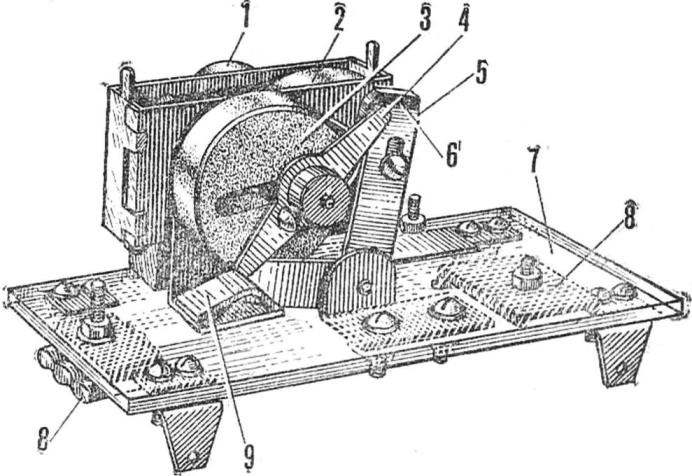 Fig. 1. Model nutricide:
1 — motor, 2 — gearbox, 3 — unbalance, 4 — Cam, 5 — vertical shoulder swing arm 6 — pusher of the lever, 7 platform, 8 — additional weight, 9 platform, the horizontal lever arm.
On the same principle of my mechanism. PA based in stationary brackets mounted engine and swinging arm, the shoulders of which are posted in different sites. Flat shank-yoke shaft fits over a cylindrical load — imbalance with a radial groove, and propellerbuy Cam with a screw.
The mechanism works as follows. When the shaft rotates the load under the action of centrifugal force shifts in the position of greatest imbalance (see Fig. 2, phase 1). Continuing to rotate together with it, the Cam strikes the ground the lower arm of the lever that the pushrod vertical shoulder at the same time dramatically shifts the imbalance to the center of rotation. The reaction inertia forces passing through the axis of the lever, said base the forward momentum, and the mechanism moves forward. Through a half turn, the cycle repeats. If you make the mechanism with a pair of synchronously rotating in opposite directions of loads, the system will be more uniform.

Fig. 2. The principle of operation of the mechanism:
I — the centrifugal force is directed backwards and is balanced by the friction force to the pole; the base of the mechanism motionless; II — the centrifugal force is directed downwards; the imbalance of pressure on the pusher of the vertical arm of the lever; III — the centrifugal force is directed forward, the Cam strikes the ground the lower arm of the lever, wherein the pusher vertical shoulder dramatically shifts the burden back; the base is moved forward in arrow position IV.
Those who are interested in my mechanism, you can be sure it is working by making a simple model. This will require mikromotorchika with gear from self-propelled electrohouse, a metal disk d of 30 and 10 mm thick steel plates for the levers, brackets and supports and a rectangular plate of Plexiglas under the base. Simple device mechanism is clear from the figure.