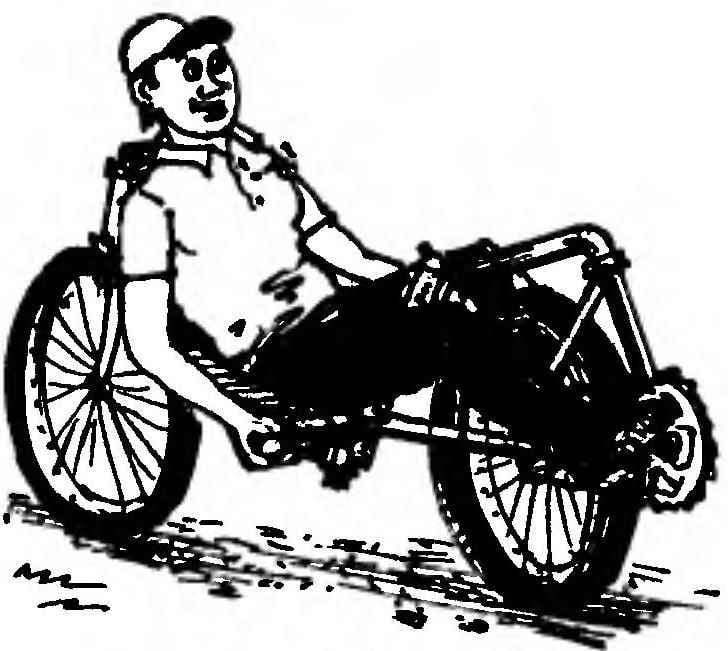 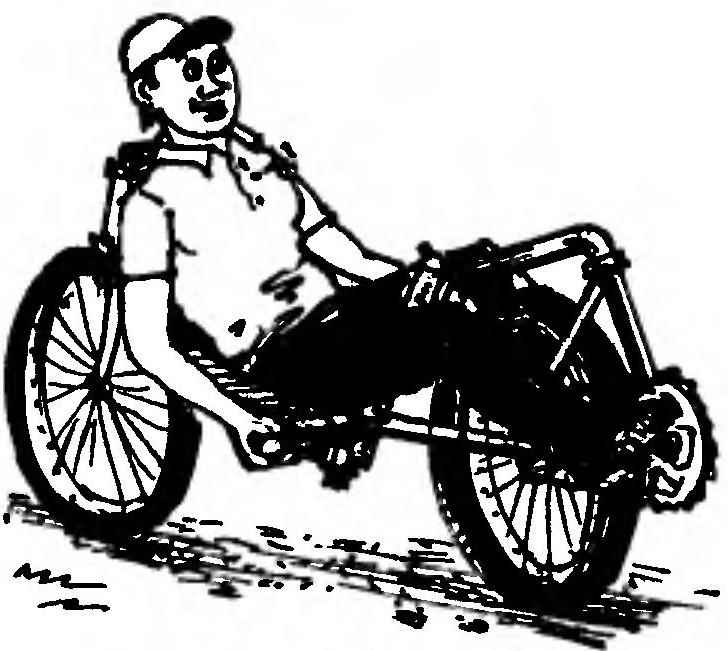 In the journal “modelist-Konstruktor” No. 4’2003 was a good publication about the interesting developments of the members of the club of Tambov veloturistov: different models for every taste with comfortable armchairs, an efficient muscular actuators and stable three-wheeled chassis.
Among these original homemade is one model that is fundamentally new in the environment of velomobiles, as she, like a normal bike, two-Wheeler! By construction, the model is simple, although it requires a special frame-the console with the extracted BB node. Off the bike they can be comfortable fit of the driver on the sports car reclining. I made a prototype and have tested it, because somehow I could not believe that you can ride a two-wheeled car almost lying on his back.

But you can, and bad, sensations new and unfamiliar! But since the frame I assembled from two standard, cementing them in several places with bolts, the stiffness of this design was insufficient. Now reflect on how to make a more robust frame (I think to communicate with colleagues from Tambov). Of course, this model requires careful alignment and fit to the chain rubbed on the seat and front wheel, which should be small and not to touch the rods when turning. But it is, in fact, trivia, and in the near future, think thoroughly to ride the new “horse”.

In the process of working on this model I had, I think, interesting idea of bike “on the contrary” when the front wheel becomes the leading and the rear — rotary (three-wheeled version of this, perhaps, not new).

The essence of the idea. For example, the well-known Bicycle “Salyut” with the so-called “ladies” frame (without the top horizontal jumpers) deployed “backwards” and is attached to the inclined pipe to the opening in the chair frame back to the steering wheel (now it is back). To the rear fork with the drive wheel (now they will come) firmly fasten the other part of the frame with BB node (cut from the frame of the old bike). The wheel mounted under the seat and pivotally connected his rigid rod with a swivel wheel in the back. 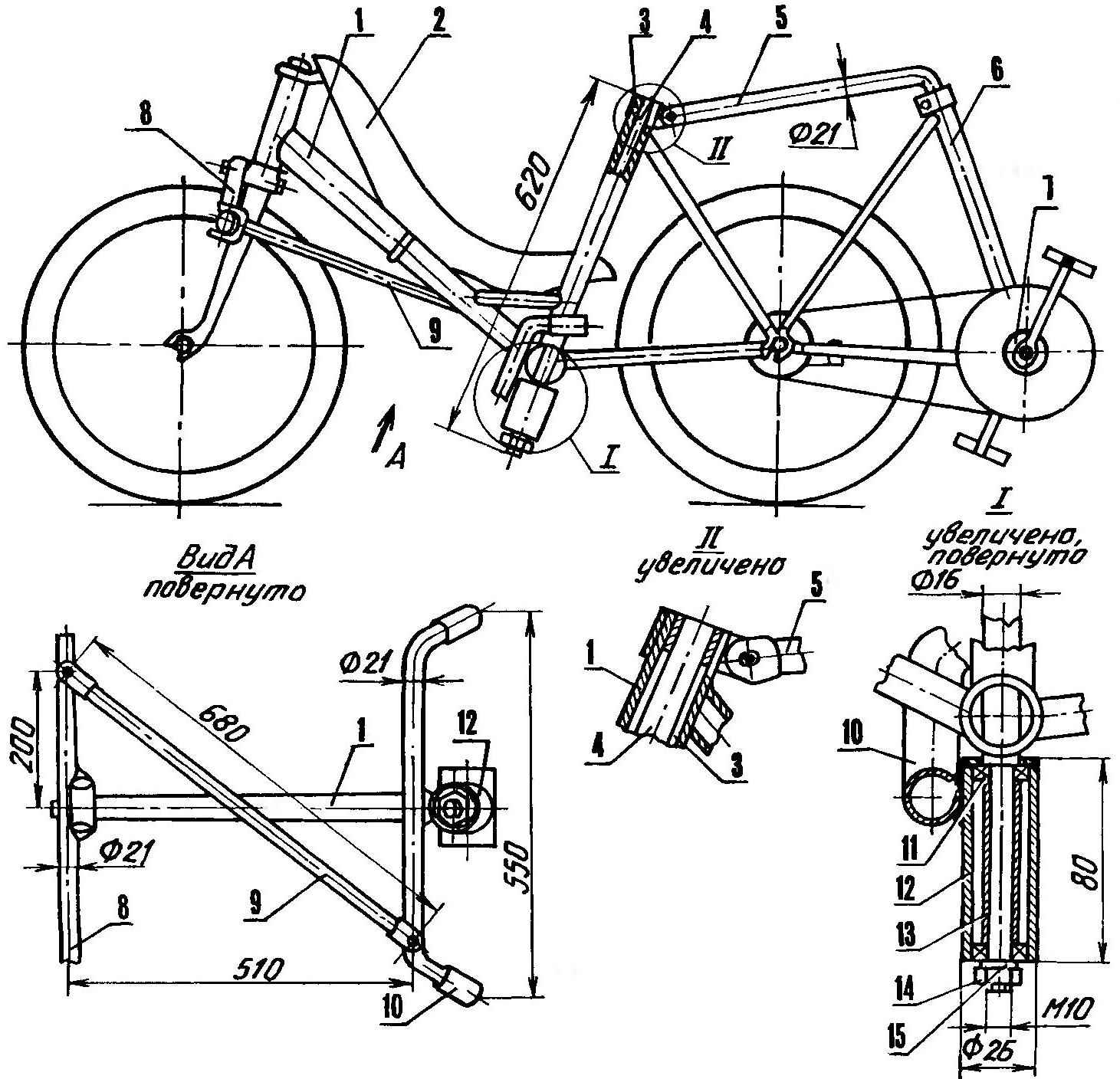 So, about the design in more detail. In the case of the carriage (frame of a Bicycle “Salyut”) from the bottom is a hole with a diameter of 16 mm, the hole is introduced the rod of steel rod the same diameter and a length of 620 mm, is passed inside the seat tube of the frame (instead of a rod you can use a pipe of appropriate diameter with welded tip). The upper end of the fixed rod through the intermediate slit, the ring of regular klimovym clip. At the lower end of the rod pre-machined axle with a diameter of 10 mm, with M10 threaded hole at the end. The axle is mounted through the spacer sleeve two ball bearing series 1000900. The bearings are wearing glass made from pipe 3/4” with welded flange and fixed by the bottom nut. The wall of glass is securely welded to the wheel (you can also make yourself — from half-inch pipe). To the rear fork of the frame using half — inch pipe, the crossbar is rigidly attached
the same fork with BB hub and a pedal.

The driving wheel is deployed in the plug by 180°. Now the drive (sprocket — BB, node, led — the hub of the wheel and connecting them with the chain) on the recumbent is on the opposite side, and not as a standard option on the bike.

The chair — comfortable and soft (you can use plastic from the tram) by means of brackets secured to the frame.

Regular steering wheel is removed, and by turning the (now rear) fork attached cross member, which via a rigid rod pivotally connected with the seat by the wheel. Pull installed diagonally from the left bar end to the right end of the crossbar or Vice versa. Such a compound steering with swivel wheel provides easy handling. It is now the same as on a traditional Bicycle— the machine rotates in the same direction, where rotating the wheel.