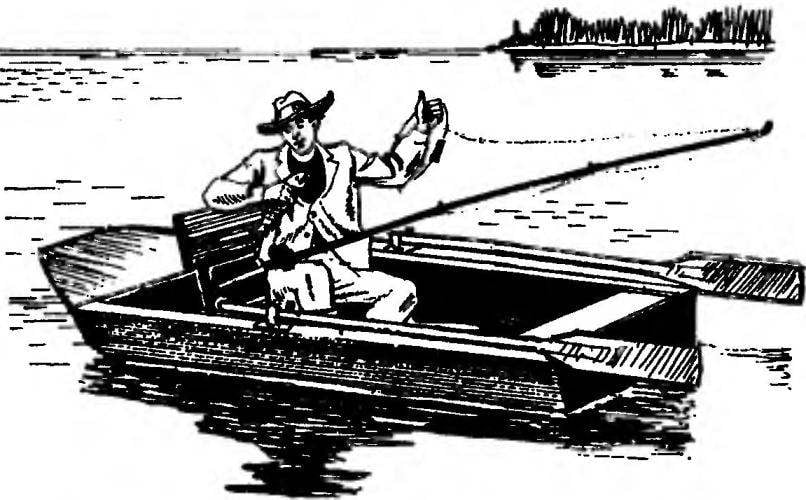 At the time of making this simple craft, even the name of which is hard to find: “whether the junk, or boat, or boat, or raft”, I had a “Kazanka” boat is roomy, durable. However, it was intended for sailing with an outboard motor. But what, say, fishing in a quiet backwater after it came a motor boat. To walk on the oars “Kazanka” too heavy and unwieldy. Shipping it to the waters too troublesome to do without the trailer and the assistant was not possible.

So I decided to make the boat smaller, but lighter and more maneuverable. Suitable material for her were that year under the roof of the garage was kept large duralumin sheet, which is cut into pieces for small items just the hand wasn’t raised. He (of length 2700 mm width 1800 and a thickness of 2 mm) largely determined the design of the boat, its dimensions and contours.

For the prototype took a boat, which is called “conbot” (probably, for the simultaneous resemblance with doctrinally Chinese boat — junk and port worker — bot). These boats are very stable and have high load capacity that I needed in the first place.

He designed the boat based on the size of the available sheet metal. The height of the boards appointed 350 mm (I read somewhere that this is the minimum allowable), and the length of the front transom — 600 mm, which corresponds to the angle of inclination to a mirror of water of about 35°. Although cutting of metal sheet sight simple, making the sketches of the future of the boat and trying to anticipate all challenges, fulfilled the layout of a rigid sheet of cardboard.

The design of the boat dural sheet was used as the sides and bottom. At the same time, it is the carrier element, as the usual power set of frames and stringers in the boat. Only part of the role of the two banks (seats) and plancher. No the boat of the usual bow, and the keel itself, because it is almost flat-bottomed and the side of her ahead not converge on the stem, and pass into the inclined trapezoidal transom. 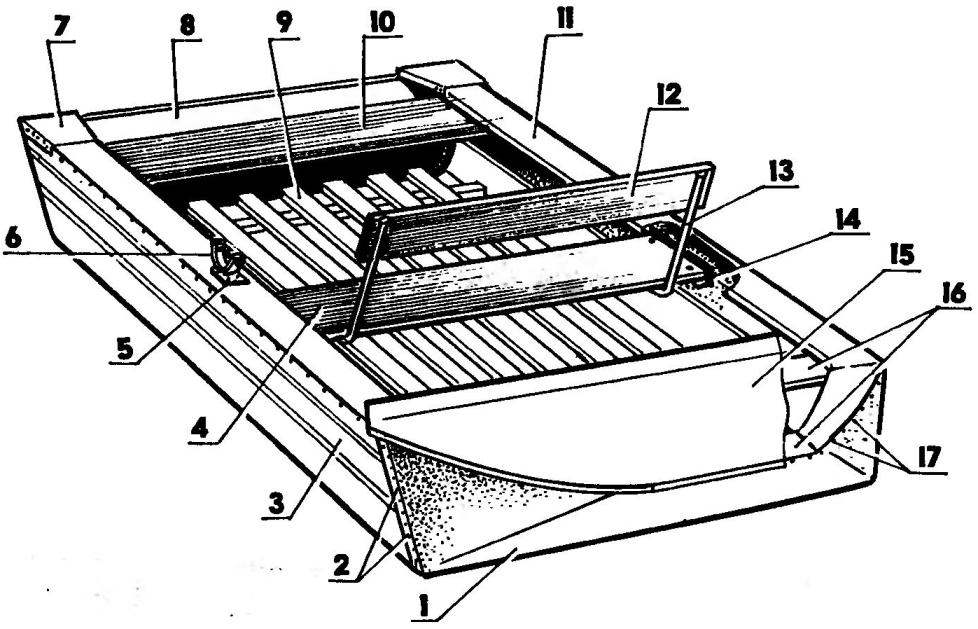 General view of a watercraft:

Advantages of boats with dural covering well known and are found even on the shore: lightness, strength, durability. Although the latter circumstance into account and not taken (the boat is manufactured, in General, as a temporary flotation device — to purchase a good inflatable boat), but it went on saying: “nothing is permanent than temporary” — the boat is already several years and disassemble it is very practical get the boat out. To move, the boat does not need a trailer it can be transported in the trunk mounted on the roof of the car. On it boat is easy to ship together and I can even load one. No worries with maintenance and preservation for storage — put it on the Board or on the rear transom, moved closer to the wall and let it stand until the next navigation under a canopy, occupying a very small area.

On the water, there are other positive qualities: good stability, large displacement (buoyancy), high maneuverability and ease of turn at the oars. Well characteristics such as movement rate or stability on the course at such speeds, boats if not excessive, certainly not major, so they have neglected to provide the other above-mentioned qualities.

Doubt in working through the design generated by the transverse dimensions of choice: whether to make the Board taller, but the width is smaller, or Vice versa. The choice fell on the option “reverse”. In those areas where they had the boat to swim, tranquil backwaters, quiet rivers, small lakes, etc., strong currents and big waves there, and then not so necessary the high side. But much width — just what you need. Often out fishing or hunting for waterfowl game has to stand up in the boat even at full length. 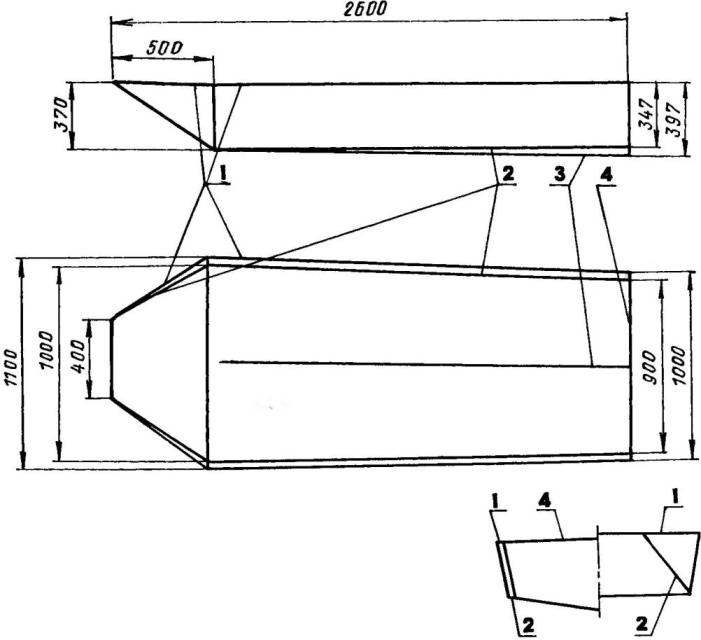 After a dummy has caused the label to the sheet of metal and started to cut in chunks. The principle of “measure twice, cut once” in this case is considered unacceptable and used the opposite approach — having measured and marked out once, to cut metal was the first large than required by the allowances to avoid cutting right up to the end of the lines. Gradually bending and adjusting to each other mating part, little cut bleeds, cut line marking. Note: this operation is best performed with a helper.

Compound joints-joints (allowances with a sheet) made of aluminum rivets round head and a stem diameter of 3 mm. Corresponding holes are drilled simultaneously in both connected parts and the parts at the stern in place in a staggered manner (two rows). Before riveting the abutting surfaces missed heavy-bodied paint.

Not to use the material on the transom from the same sheet of aluminum, picked up the other — thickness: 5 mm Riveted work a little increased, but the length of boats was possible and now the boat can safely sit two people with the necessary fishing or hunting equipment.

The original craft was conceived very simple form: the body in the form of a rectangular parallelepiped (with steep sides) and nose ahead in the form of a prism. In the course of the housing Assembly before installing the transom and found that the side of the boat collapsed (moved to side) under its own weight, and the bottom at the stern while lifting your body SAG. The nose of the boat lifted, and the top sides in the bow cut it out. However, all of this I was not disappointed — these changes gave the boat a more attractive appearance. Then the transom I cut not rectangular, but curly. As a result, the boat has become slightly disorganized side, a raised nose, and small deadrise. The latter, incidentally, in theory, was supposed to improve the stability of the boat on the course that operation happened.

Along the upper edges of the sides mounted pensiri of fir boards section 100×15 mm. On the boats they serve and the mating stringers and beams. Nose on the front transom beams they are connected by a cross beam to support the deck. In the bow plancher because of the greater curvature is made integral, and the joints installed and attached substrate of the same Board. All over the Board to plancher nailed with galvanized nails. Another BIMS planirali mounted between the rear edge of the deck flooring made from 1.5 mm aluminum sheet. The edge of the deck beaded to fall on the floor water was dripping over the side. Aft pensiri with the sides and transoms are connected by rails, sprung from the same 1.5 mm dural sheet. Here on the corner brackets, riveted to the sides, installed a Bank of passengers. In the same way, but only in the middle of the boat mounted the Bank of the rower. Despite the simplicity of the equipment of the boat this can a back. But because when driving it only prevents the rower, the backrest is folded (he leans forward) and installs the back flush with the surface of the banks (as in “Kazanka”), Raised back when the oarsman is resting, or fishing. 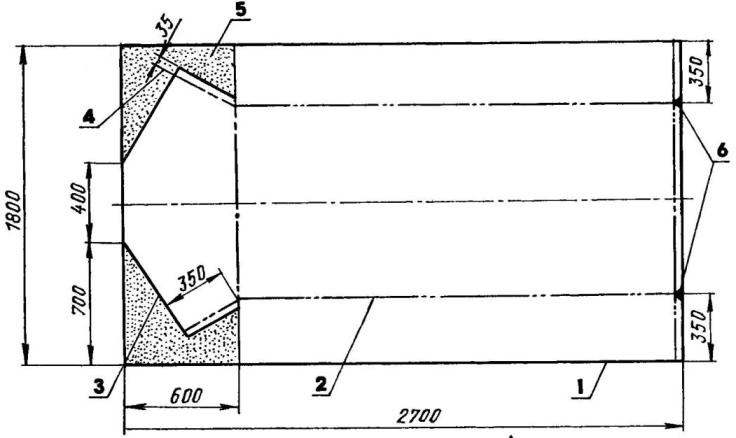 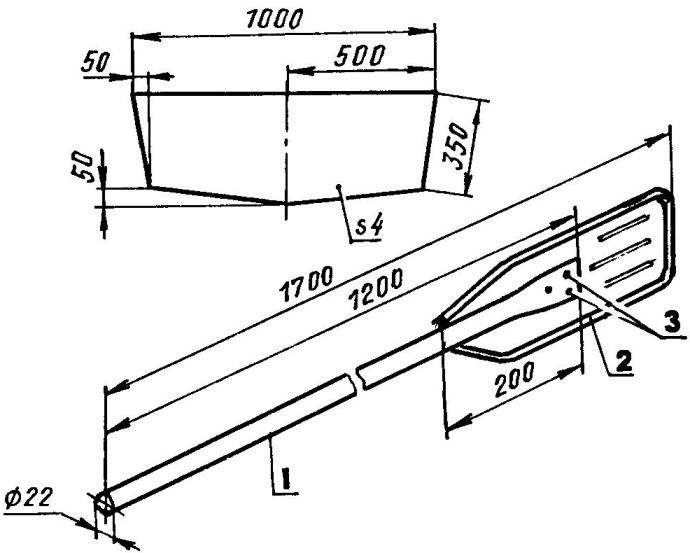 And the last one. Homemade paddle, although the blade taken from the oars of the boat “Kazanka”. The spindle is of duralumin tubes with a diameter of 22 mm. At the bottom of the pipe cut in half lengthwise, the ends flattened. In the slots of the blade is inserted and riveted.

Oarlocks — the usual two-horned plug welded to the pins. The pins are inserted into the sleeves, riveted to the sides under planirali. The holes in plansearch are not prepared, at this place attached to them a steel lining. The oars in the rowlocks are held with M5 bolts inserted through holes drilled simultaneously in the horns of the forks and the pipes of the spindles.

All wooden parts of the boat soaked in hot linseed oil for two times, and the body colored outside paint in “safety” color. For unsinkable boats forepeak (niche under deck flooring) Packed with foam.

Consider your safety: get out on the water in a boat can only be wearing a personal flotation facility: vest or bib.