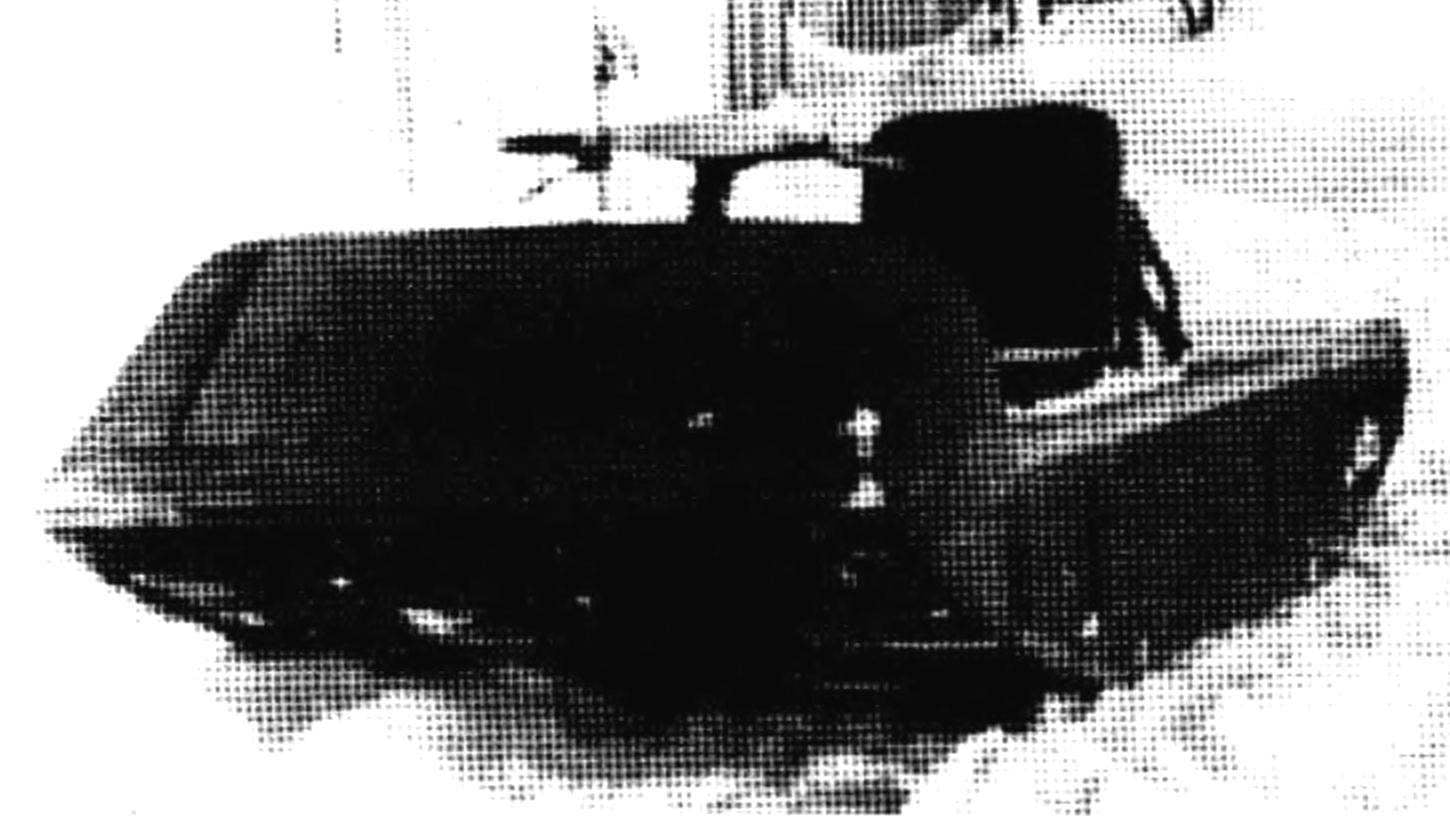 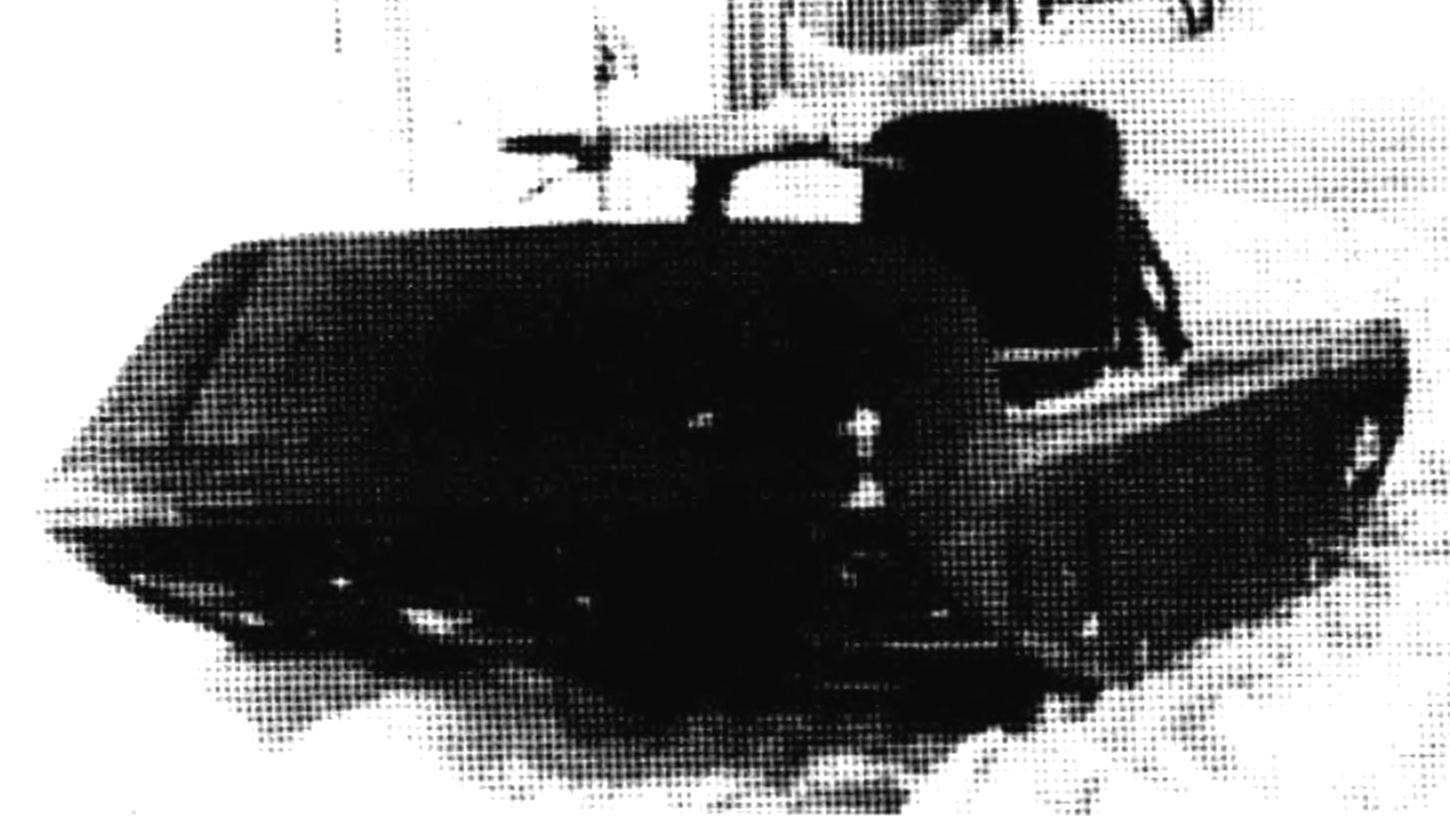 He was born and I grew up in that land of mother Russia, where the land most of the year is under a thick cover of snow, a reason those places is considered the birthplace of Santa Claus. Perhaps that is why along with General interest in engineering of particular interest to me has always evoked the snowmobile machine. To have such was my childhood dream come true. When I grew up and learned to do many things with their hands, decided to make its design. By the time I’ve not only studied the device snowmobile vehicles, but was able to critically evaluate the advantages and disadvantages of this technique.

Oddly enough, but serial tracked snowmobiles, even imported and modern, are ill-suited for driving in deep loose snow. When driving in such conditions if you bend or bends the rear of the machine often fails. Trying to get out, increasing the engine speed, usually leads to the fact that the tracks are buried in snow deeper. Then get out the car from snow captivity without assistance was a challenge. This is understandable — which is only its own weight — because the “horse”-it is almost all steel. And so into the woods, in the ravines after snowfalls and blizzards serial snowmobile alone is better not to meddle.
My own car I was building with the use of it even in such difficult conditions.
The body of the snowmobile is made of wood. Just made from lumber, like a boat. The base body consists of four longitudinal wall is made of softwood (spruce, pine). The walls collected from a planed to a thickness of 45 mm boards-“fifty.” This was probably not the Board, and timber, as their width is only slightly greater than twice the thickness. Together the boards with nails-dvuhletkami at the edges, nailing every next bar to the previous one. The nails are slightly displaced along the (forward or backward) to the top did not hit suddenly, the hat bottom. The ends of beams, sawed off on a scheduled straight-sided curves. The steepness of the curve in front less than rear. 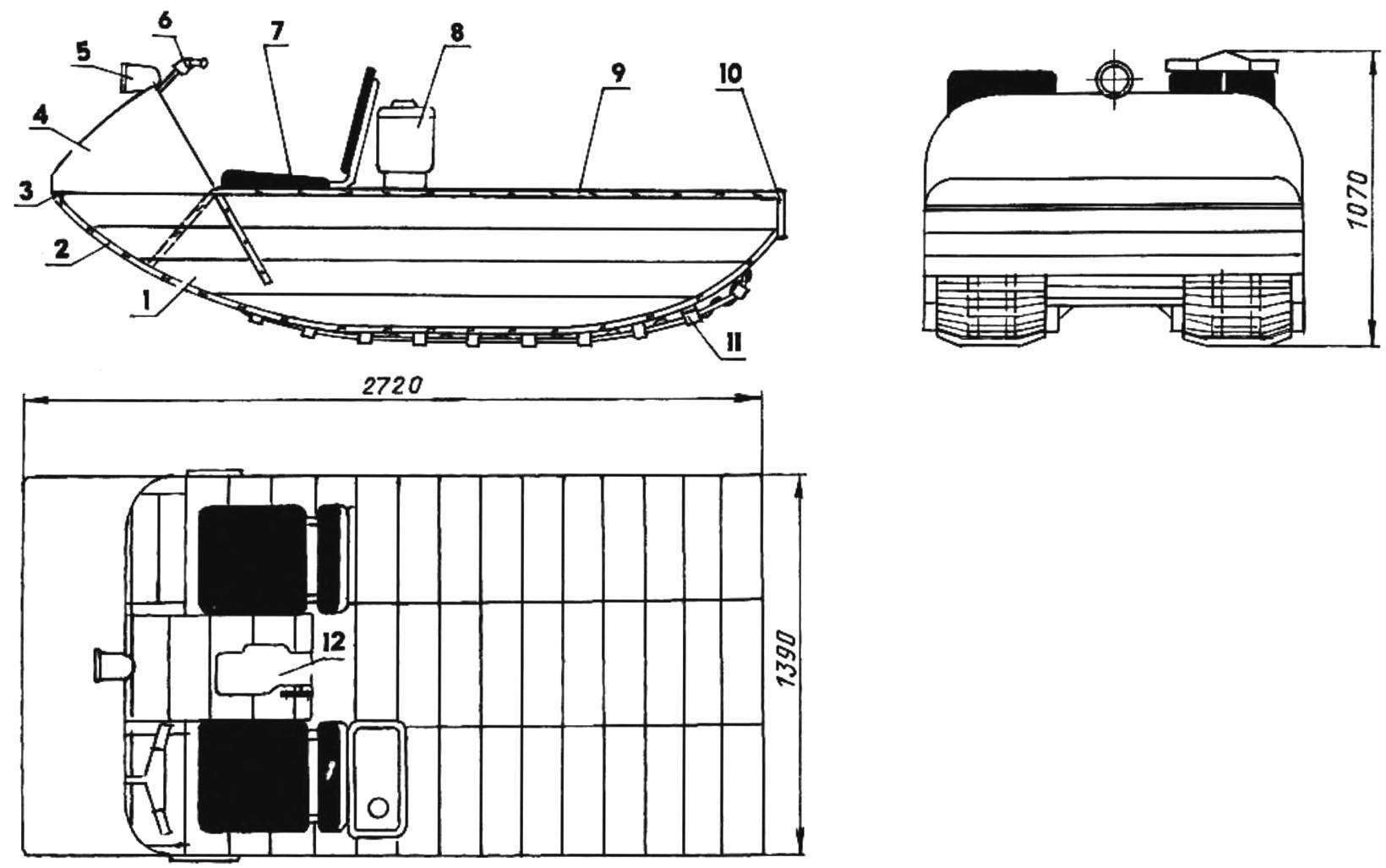 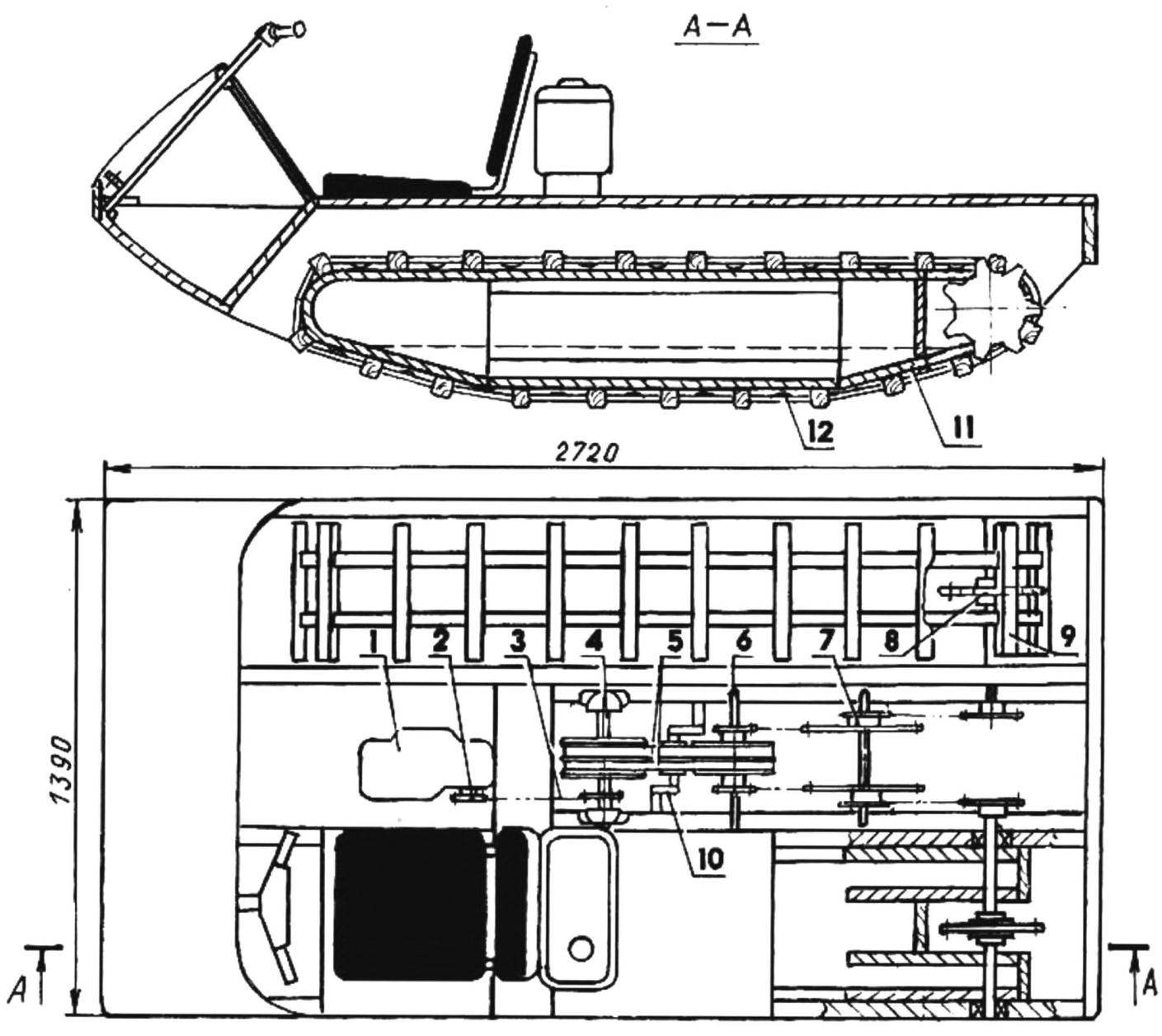 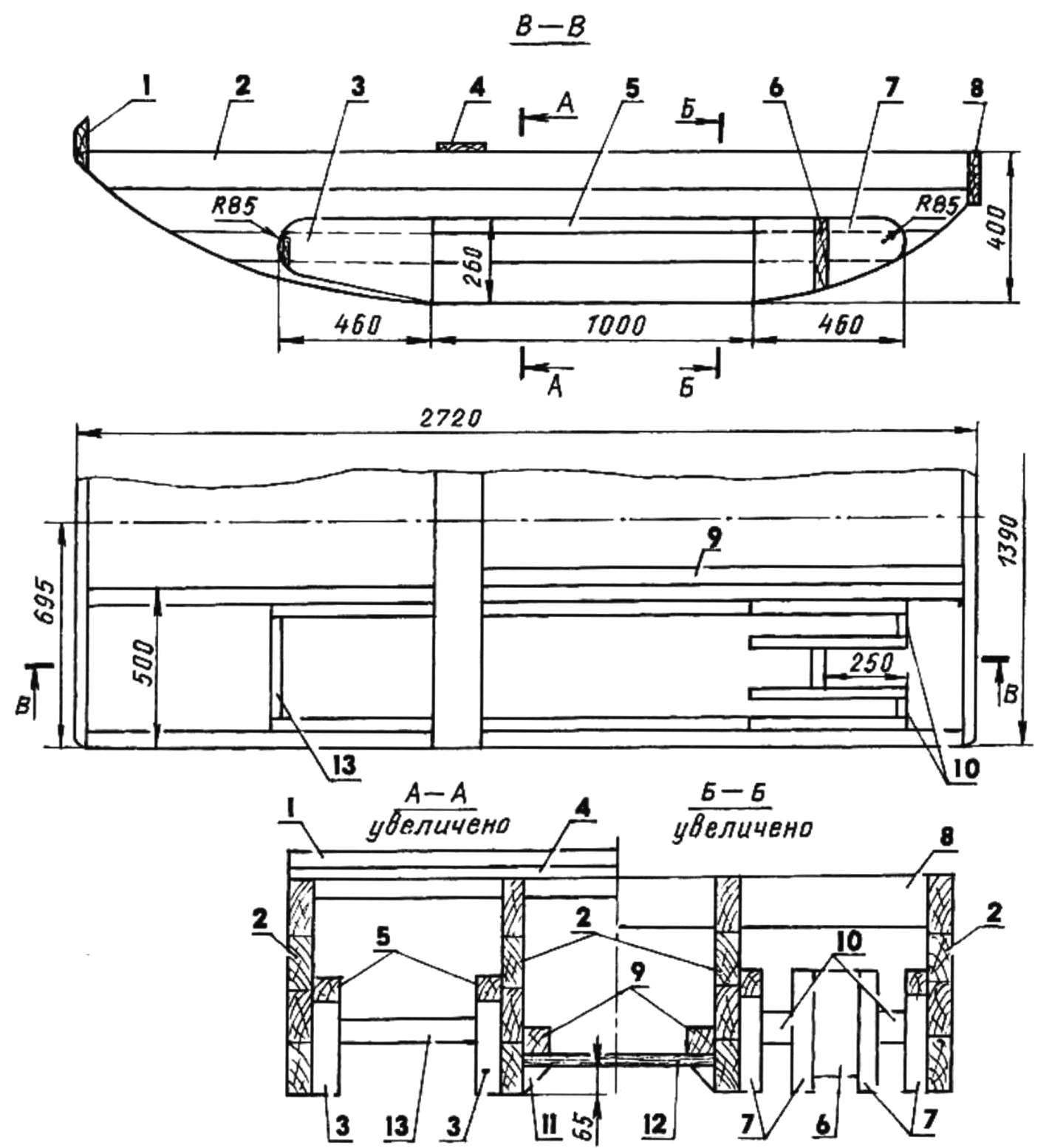 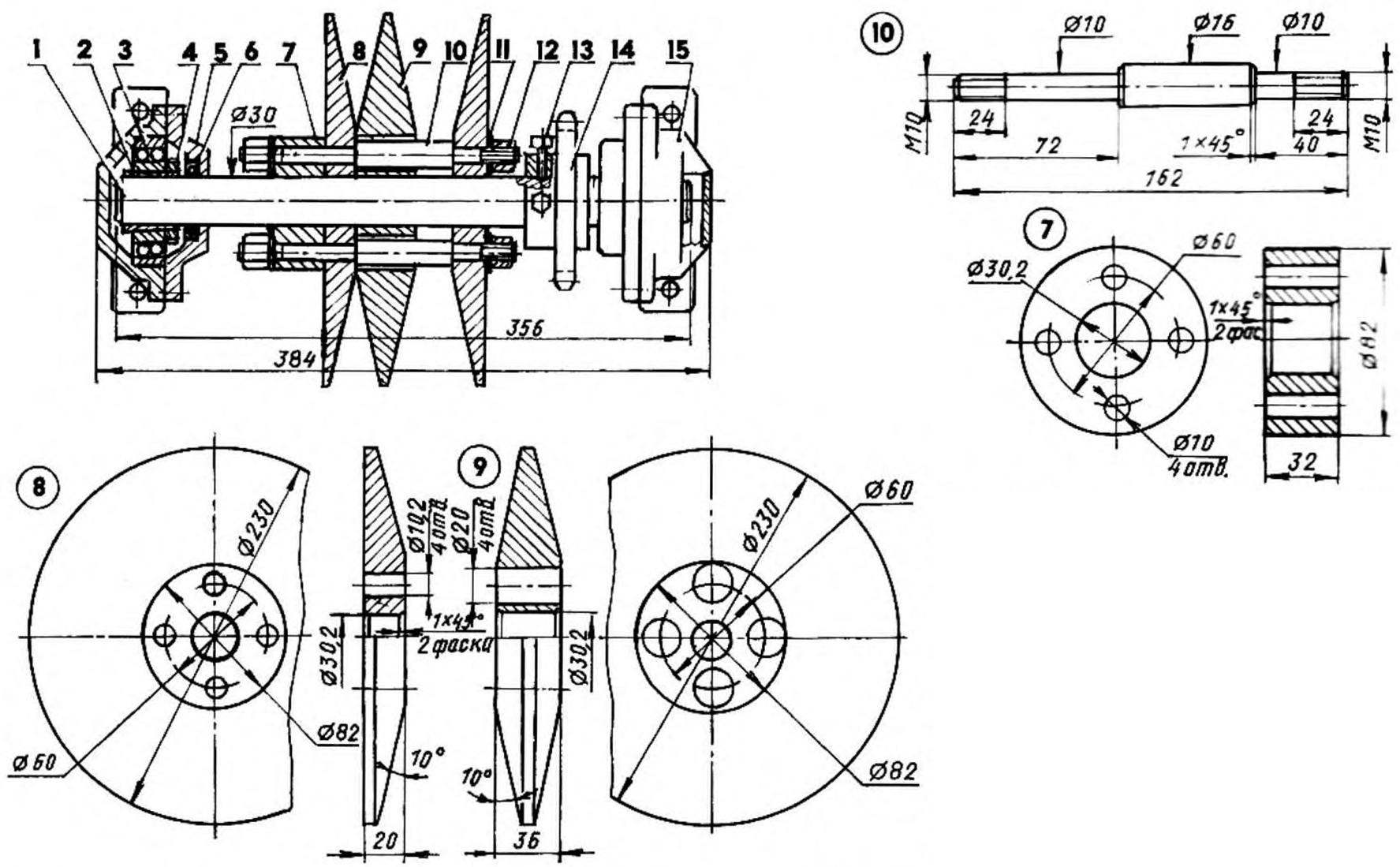 Node idomou variator shaft (POS. 1, 2, 3, 6 — from agricultural machinery, POS. 4, 5, 8 made of steel pipe Ø38×30,2):
1 — axis (steel, circle 30); 2 — sprocket z3=16, t=19,05 (2); 3 — the bearing 206 (4 PCs); 4 — medium spacer (L30, 2); 5 — small spacer (L8); 6 — pulley (2 PCs); 7 — shaft hub (steel, circle 112, 2); 8 — large spacer (L70, 2 pieces)
All four walls are identical and connected by the ends of the bumpers and in the middle of the top jumper in the entire width of the housing. Bumpers are made of planed boards-fifties, the jumper is from a “twenty”. But that’s not all. In many places the wall is connected to the sheathing boards in pairs: external with the nearest inner and inner together. In addition, the walls on the inside nailed to the bars (as they are called builders, “skull”), they also sewn boards (lining 16 mm thick) covering boxes of the tracks (between the outer and middle walls) and the bottom (between average). All this cross set creates a sufficient rigidity of the body without the struts and ties. If necessary, such additional fasteners can be installed where there are no moving mechanisms inside the boxes of caterpillars in the front and rear extremities of the machine. To the body can be attributed to the elements (walls, partitions) that cover the drive sprocket caterpillars — that in these places the snow had not penetrated the boxes.
The vertical walls of the boxes are rounded and the lower edge beveled to easier tracks came to a few obstacles along the way. From the bottom of the box further trimmed 5-mm sheet of polyethylene. The leaves to the bottom are attached with screws wpoty.
In front of the body casing is made as a floor in deepening for feet of the driver and passenger. Above the recess there is an arc from a steel angle 25×25. In the lower part the area straight to the strip, and the strip attached with screws from the outside to the far wall. To the arc on the M4 screws, and the bumper is attached with nails plywood fairing.
The equipment of the snowmobile will not even call Spartan: two seats on the sides for the driver and passenger of the car LUAZ and motoroleriu steering wheel with controls, and even a spotlight — after all, winter day short.
Caterpillar mover in my car very simple. There is no inherent mechanism rollers, sloths, etc., not even the driven sprocket.
The caterpillar is not difficult to do. Truckee (lugs) are made of birch sticks 40×40 mm. To exclude moisture and improve durability, they are covered with cloth in epoxy resin. To the bottom support surface of the truck-nailed soles — segments V-belt (and the belt). The caterpillar tracks are United by two long narrow belts section 35×8 mm, cut off from the conveyor belt. The straps threaded through corresponding slots in the tracks. The trucks are distributed along the length of the belt uniformly with an interval of 216 mm, equal to two steps of the teeth of the drive sprocket, and nailed.
I’ll tell you: the service showed that when the caterpillar runs in the curve of the front of the box, the straps hurt and rubbed the hull. So I had between the tracks to the belts on their inner sides to nail a couple of nails with the heads wpoty nylon lining, made in the form of segments. The nails are thin, but long, their ends coming from the outside of the strap, bent the bracket and drove back to the belt.
Ready, but still open caterpillar is put on the box, the ends of straps in place of the joint are cut on the long mustache, joined together with nails hammered through the bracket. In order not to complicate the design of the mechanism of a tension of caterpillars do, leaving it “for later”, but during the operation he did not need.
The caterpillar movement of the actuator in the sprocket. The sprocket 7 teeth, and the number of tracks (lug) from caterpillar — 21. The pitch of the tracks is such that they go through one tooth, that is, every revolution of the sprocket enter into the work of some teeth, the adjacent. This version stars significantly increases its resource and reserves the opportunity to increase the number of tracks in the track twice.
The power unit (engine and transmission) — from scooter “Vyatka-Electron”. It has its own forced air cooling system. So I installed it in the Central compartment of the housing between the seats behind the front valance. Snowmobile used without alterations. Just lengthened the lever kickstarter, and changed his position. 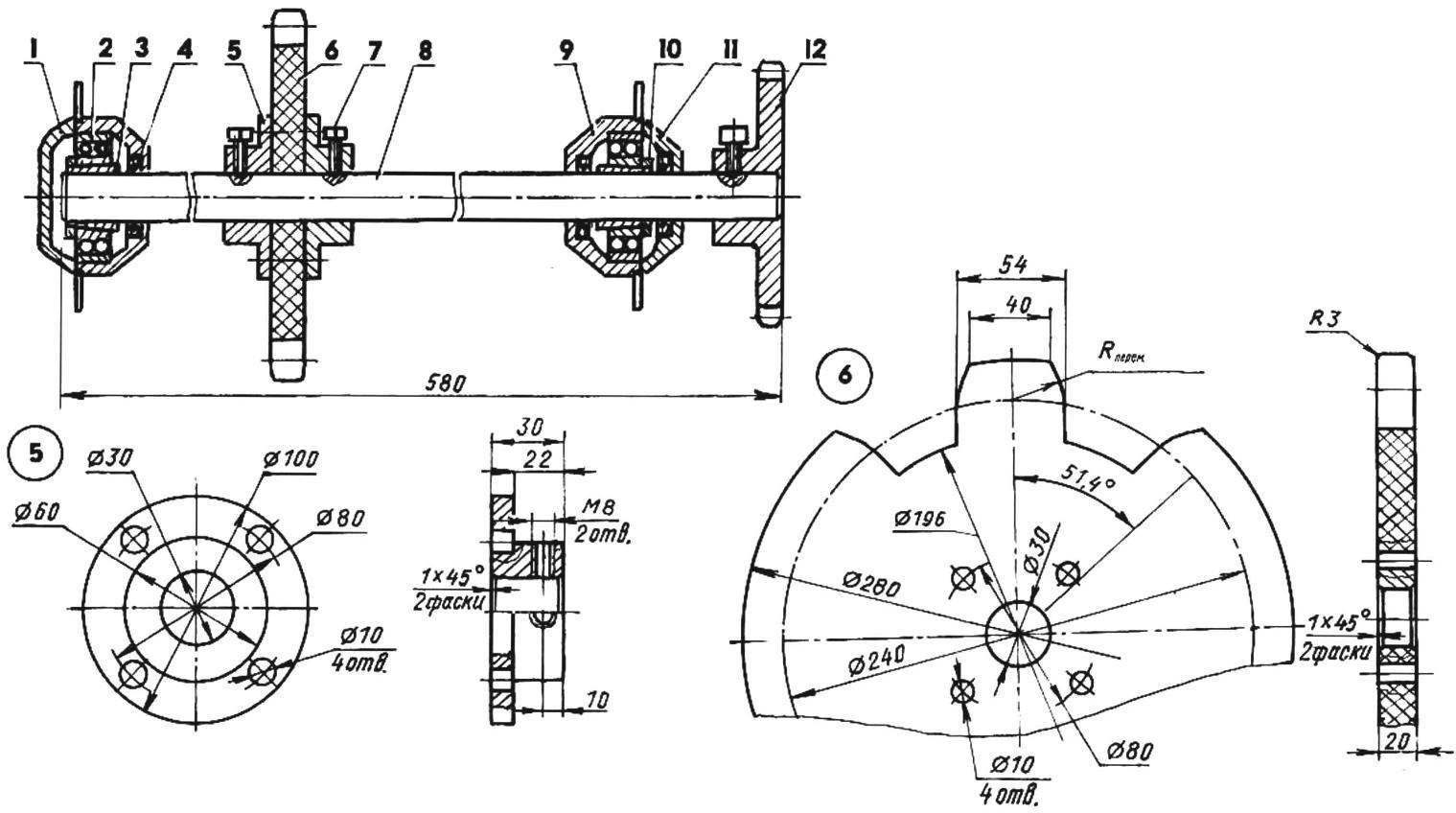 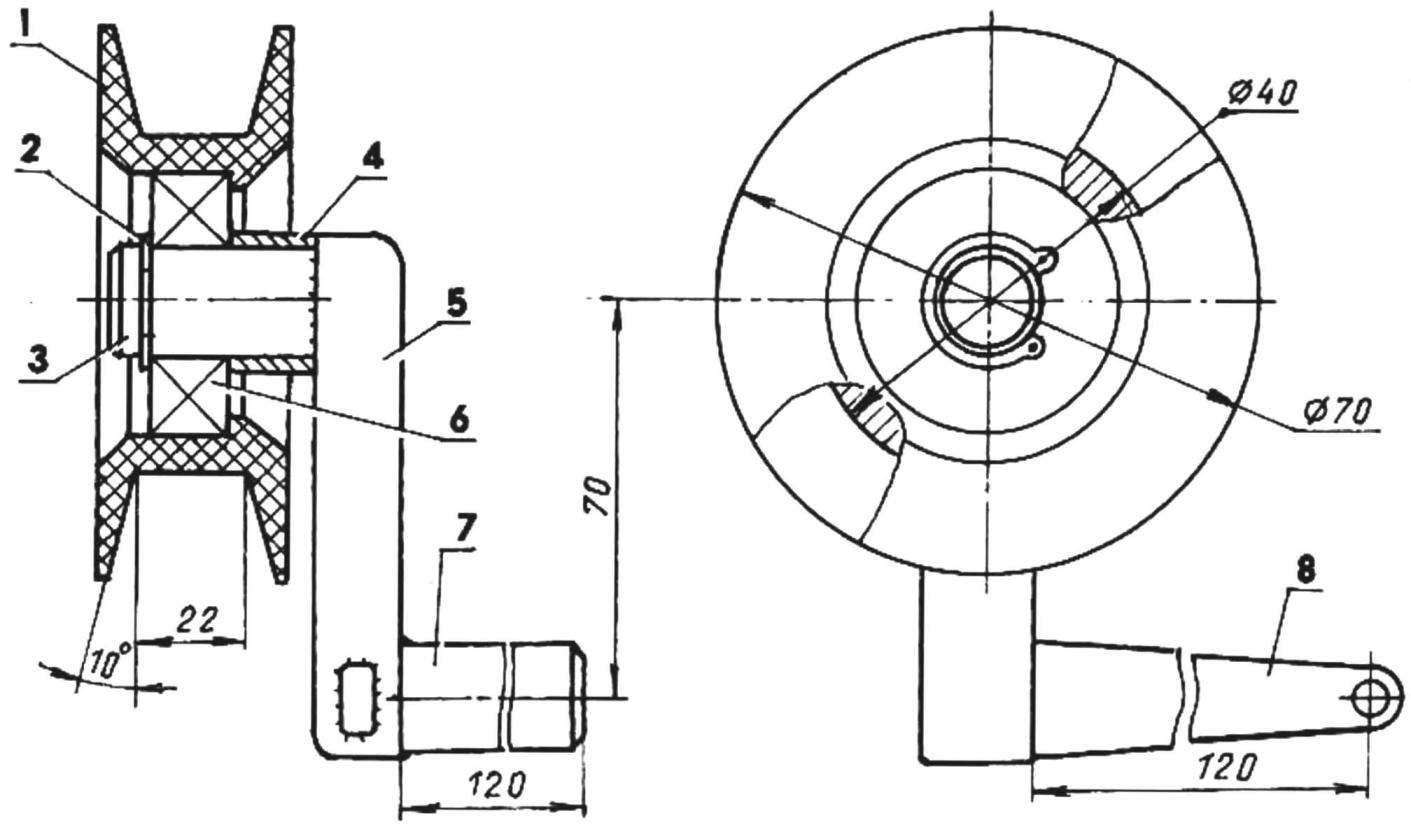 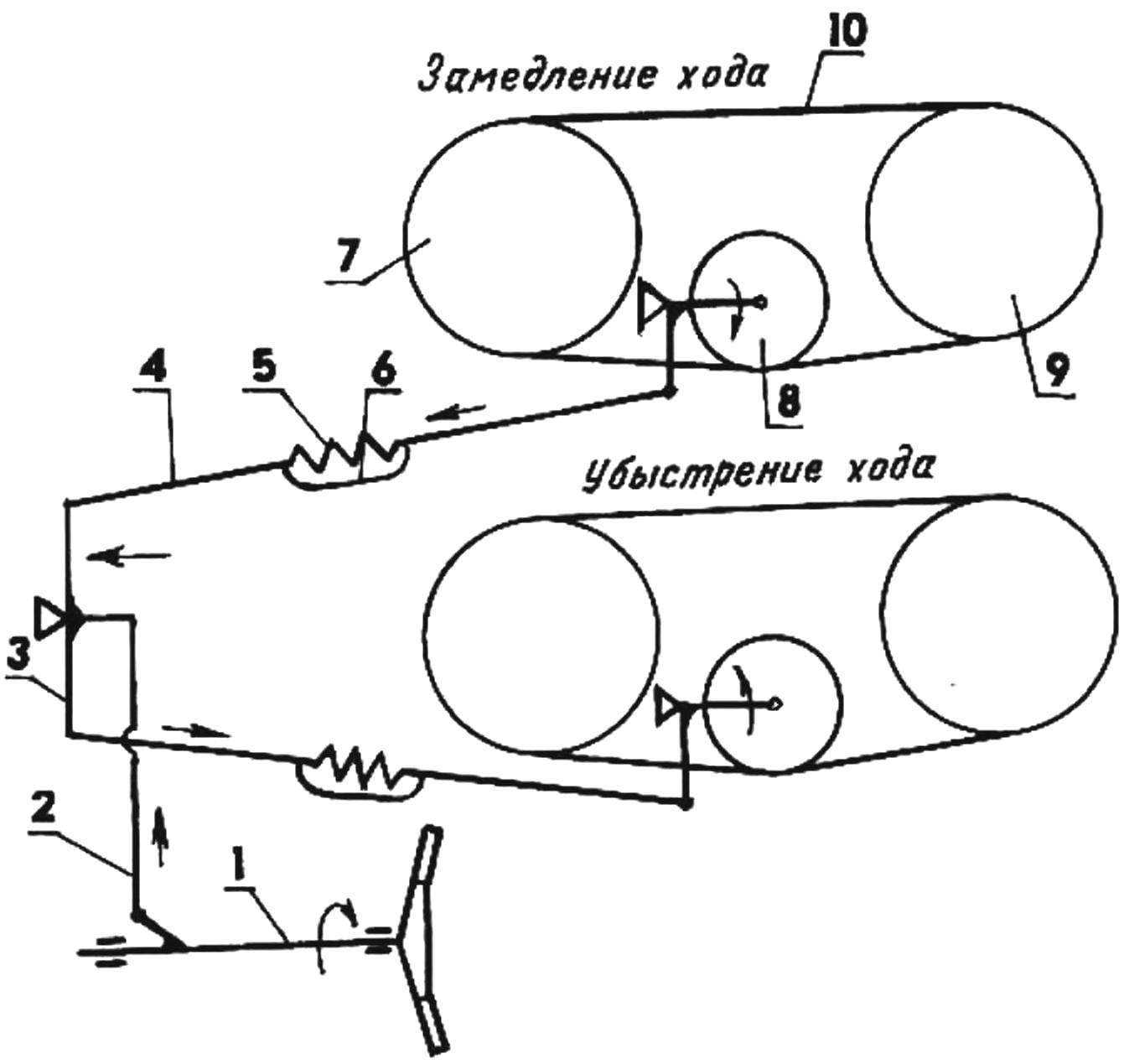 Steering control scheme (arrows show the direction of motion of the steering control when turning right):
1 — wheel; 2 — transverse thrust; 3 — rocker; 4 — longitudinal traction (2); 5 — coil spring (2 PCs); 6 — limiting cable (2 PCs); 7 — movable pulley of the variator (2); 8 — tension mechanism (2); 9 — the driven pulley of the variator (2); 10 — V belt (2 PCs)
Transmission of a snowmobile, although simple, but not quite normal, and maybe even the original. In addition transmission and change the torque, she is also simultaneously serves to rotate the machine in motion. But more on that later when we will talk about the steering.
Torque from the output shaft of the power unit via a chain drive with a ratio of i1 = 0,8 is transmitted to the input shaft of the variator sliding sheave and on to a hard (non-adjustable) pulleys output shaft using V-belts. Another output shaft on opposite sides of pulley are fixed two leading sprocket chain drive (lowering) of the second stage to intermediate shaft (gear ratio i2 = 3,125). Another reduction ratio chain transmission third gear (gear ratio i3 = 1,5) transmits the torque to the drive shaft to the track sprocket. In the end, the gear ratio of all chains of transmission is 3.75. The specified number of teeth on sprockets in chain drives is not so important — who will choose what, if only it was designed (at least approximately) overall gear ratio of the transmission. I think that for such machines it is optimal: high speed not needed, 15 — 20 km is enough, and thrust such that it is able to carry a lot of weight — both for the snowmobile landed up to a dozen children.
All components of the transmission except the drive sprocket caterpillars, located in the Central compartment of the housing. They closed the boards of a floor of the same boards as the sheathing, and access to them is unhindered.
Steering of the snowmobile is original. It combines the features of a motorcycle (the wheel), the car (rods and levers) and the tractor (deceleration and acceleration tracks on opposite sides). At the same time, the controls are very simple. At the Board deceleration and acceleration of the movement of the tracks is a CVT with two V-belts. When you turn the steering wheel through the thrust and the mechanisms of tension, the additional tension of one belt and the weakening of the other, the belt deepens in the movable pulley, and the other up the adjacent pulley at a greater diameter. The number of turns on the same hard pulley increases and the other decreases, and it is transmitted further along the transmission to the tracks and the snowmobile turns.
When driving in a straight line the car does not prowl. Several times (out of interest and by necessity) in the field has let go of the snowmobile in the “free swimming” at low speed: setting the wheel to “straight” and slightly opening the throttle valve of the carburetor, then released it and even moved on the platform or walked beside the bike — the car was moving evenly and not folded.
The snowmobile this design is not buries itself in loose deep snow and is selected from such “swamps” on the small “Gaza” (in case of low engine speed), not overloaded weak spot transmissions — variators with V-belt drive, belts do not slip.
V. SEMENOV