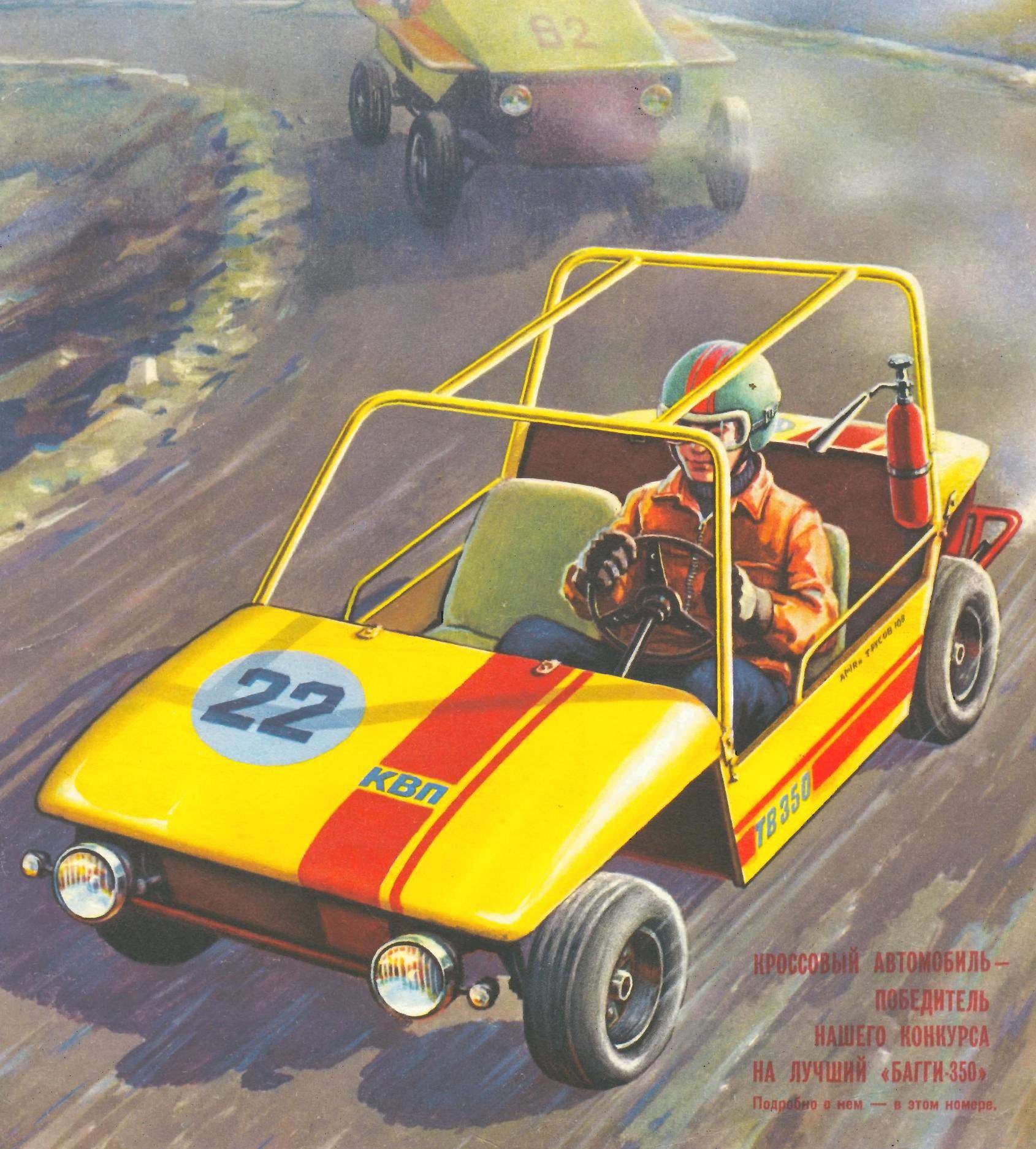 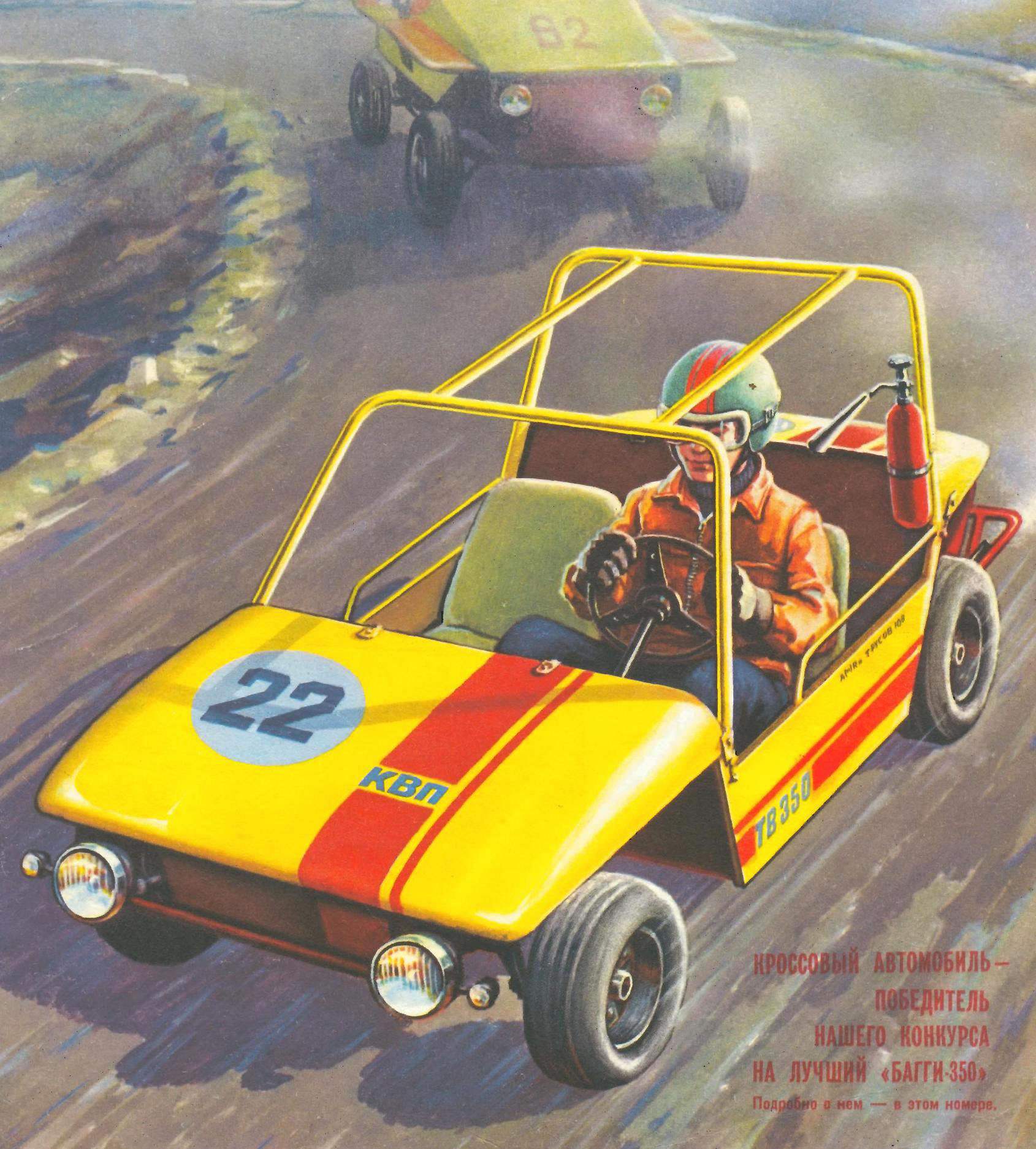 Today the story of the buggy-350, autoconstructor created in the laboratory. The house of pioneers of Leninsky district of Kharkiv city under the leadership of Taranaki. According to the results of our competition in 1975, this car is the best in its class, and its creators awarded with a diploma of the journal “modelist-Konstruktor”.
Valery L. Taranukha known as a talented designer, a unique teacher-organizer and a first-class mechanic-the driver. He and his disciples participated in many (if not all!) Union review of Amateur microelectrode. Each of them, the team headed by Valery Leonidovich, sure to put something new, original and generally very promising. For example, in 1966, in the first contest, they were shown little micro-car, which was a prototype sports car for the youth, “officially legalized” many years later and is widely known now under the name “Youth”. And the following year was presented the car to the original design, which can be considered a prototype of today’s buggies. This direction in the work of V. L. Taranukha generally marked very clearly on show in Kiev, Kharkov homebrew showed a whole family of cars of the raised passableness. One of them is our magazine informed readers in No. 11, 1970 (“the Tourist” — the younger brother of Volyn).
People with the gift of technical foresight, always give us a sense of deep respect. After all, they — the right-flank of technical progress, boldly looking to the future, heroically carrying on their shoulders a heavy burden of responsibility for another experiment, constantly seeking and dissatisfied already done.
Is Valery L. Taranukha. As no accident that the organization he now represents is called “Club eternal” search — COI, not random achievements created here machines: young rider Yuri Trusov, speaking at her, twice became the winner of various competitions in autocross, and its designers and the “Club of the eternal search” was awarded the title of winners of the NTTM.
Here is what the V. Taranukha on buggy created in the “Club eternal”.
Cars buggies are addicted to now many. It is natural: buggy proved to be a logical link between karting and the “big” Motorsport, allowing with the minimum expenses to master .all the intricacies of driving on rough terrain. However, not everyone and not always possible to obtain the desired results. 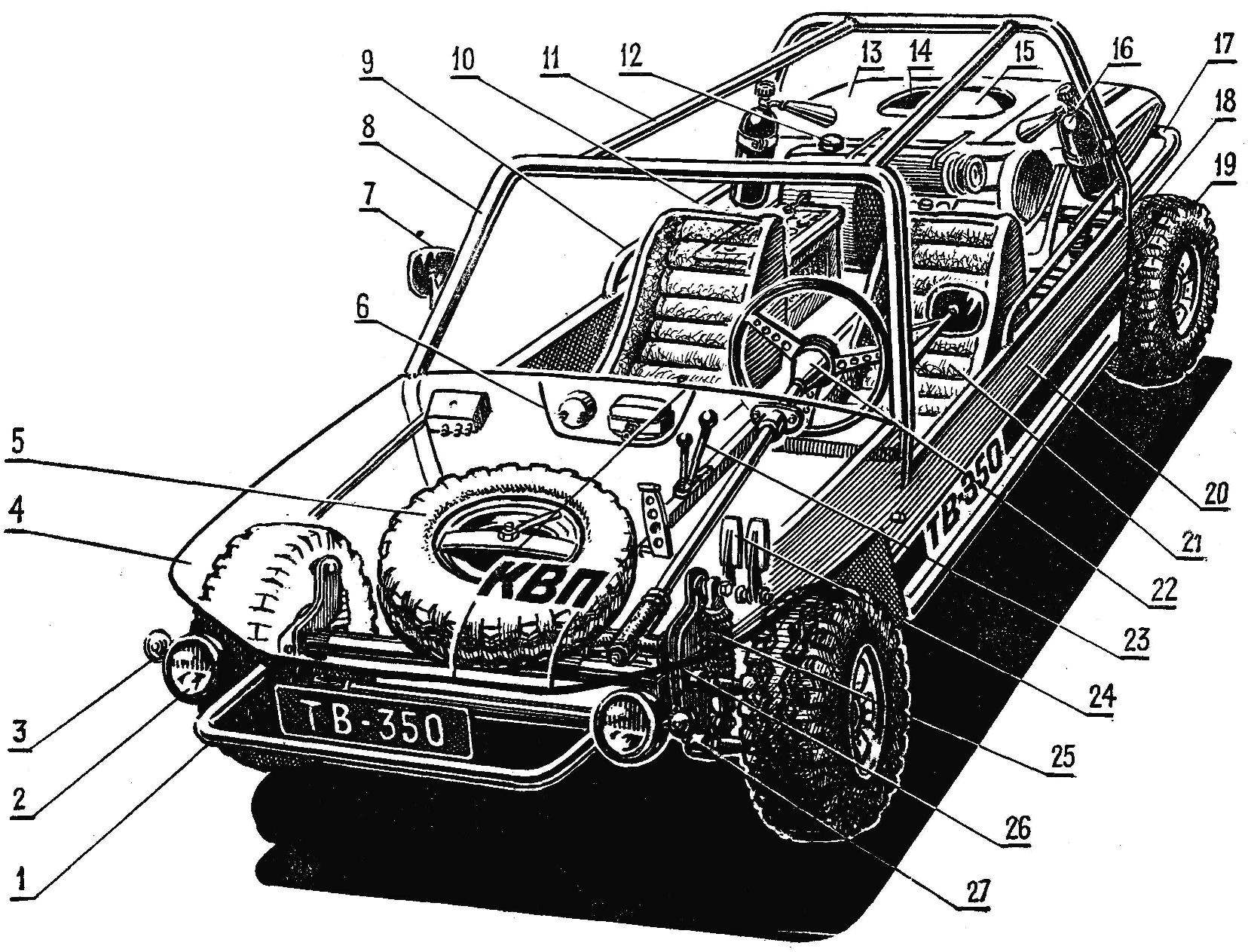 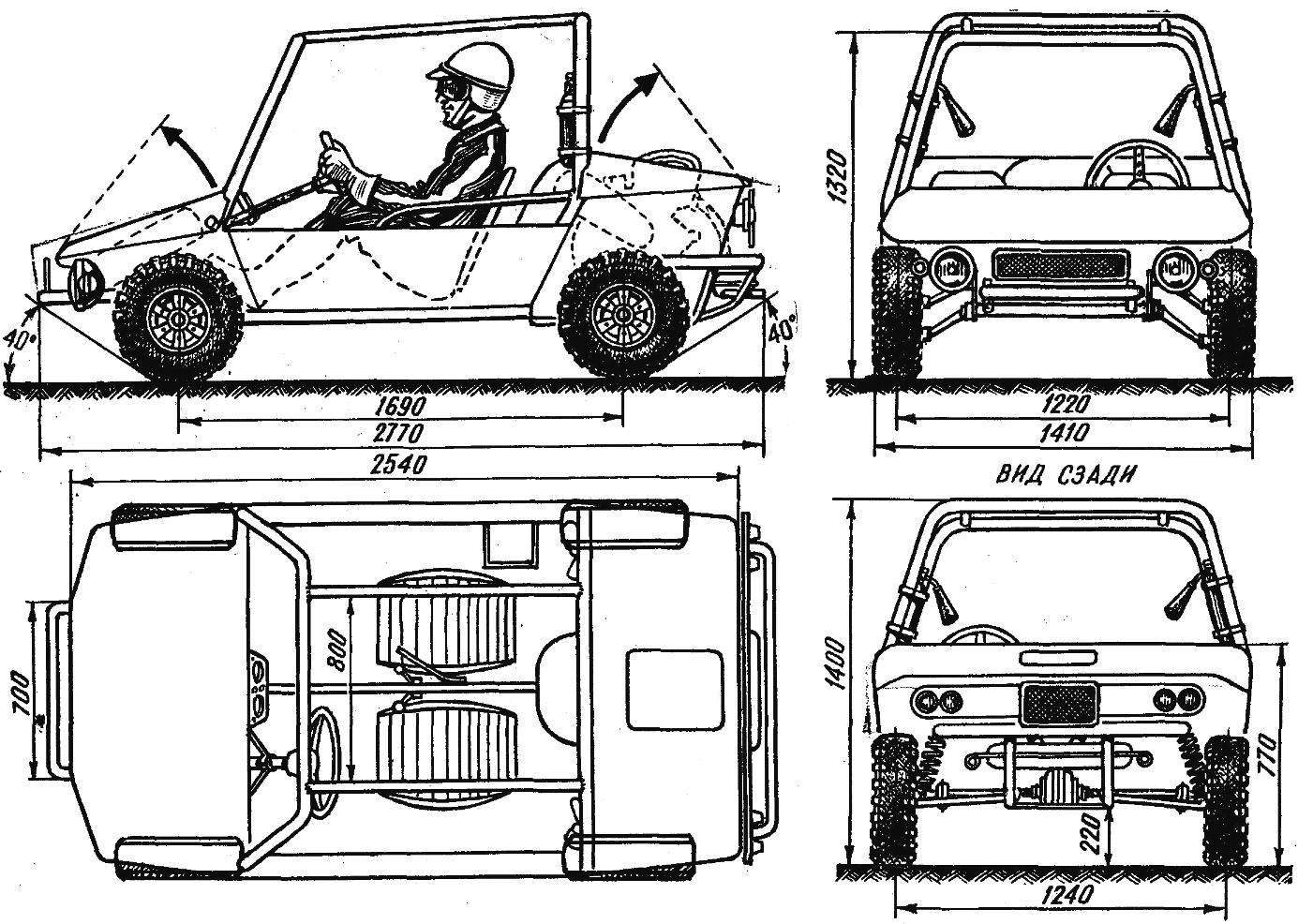 Fig. 2. The scheme of micro-car, only buggy “COI” in the four projections.
The main reasons — lack of experience, low quality used in the construction of vehicle components and assemblies, especially in the class of 350 cm3, where the widely used items of used microcar, a variety of motorcycles and scooters. The contest, conducted by our magazine (see No. 12 of 1973) undoubtedly contributes to the early achievement of such car design buggies that can meet the most stringent demands. With the materials entering the competition, we periodically introduce our readers. We invite lovers microelementary to participate in the discussion and evaluation of the submitted projects.
As you begin to create a sports car buggy, we have already had some experience in construction of micro cars in General and cars of the raised passableness in particular. As soon as the class is buggy-350 was legitimized by the Federation of automobile sports of the USSR, we went to work and our car, in question, one of the first in the country took to the sports track.
Like most other designers, we used many components and parts from motorized wheelchair С3А. But this does not mean that you can turn it into a buggy by removing the body and installing the required equipment: arc security, fire extinguishers, etc. Because the scooter is designed for “normal” operation in road conditions, and not for competition cross-country competition in which the endurance of the machine and its driver undergo a serious test.
Long-term operation of predecessors buggy (“Tourist”, “Buddy”, etc.) created in our laboratory, which used parts sidecar С3А allowed us to thoroughly examine the strengths and weaknesses of individual units and the machine as a whole. It is necessary to tell directly: alterations and improvements a lot, but without this reliable sports car.
The engine requires very careful and thoughtful refinement. As far as we could, can be seen in power performance: up to forces he was developing about 20 HP at 6 thousand rpm, then 26 HP at 8500 rpm. This is achieved by the installation of the cylinder head from the engine “IZH-Planeta-3”, the selection of nozzles with higher performance and increase compression ratio by trimming the cylinder head 1.2 mm, as well as careful polishing by-pass, inlet and exhaust channels. With further refinement, which we have not yet studied, it is possible to Polish the Windows in the cylinder on one of the schemes, common among the riders, the installation of aggregate magneto instead of a battery ignition system, crankcase seal, etc. — all this is described in detail in special literature.
Main gear — chain from the engine to the differential and further u-joints on the drive axle shafts. The main brakes are drum on all four wheels with a mechanical drive and system levelers. The Parking brake on all four wheels with a mechanical drive. The backing plates of the brakes of the scooter T-200, drums turning, with finned outer surface (for better cooling). 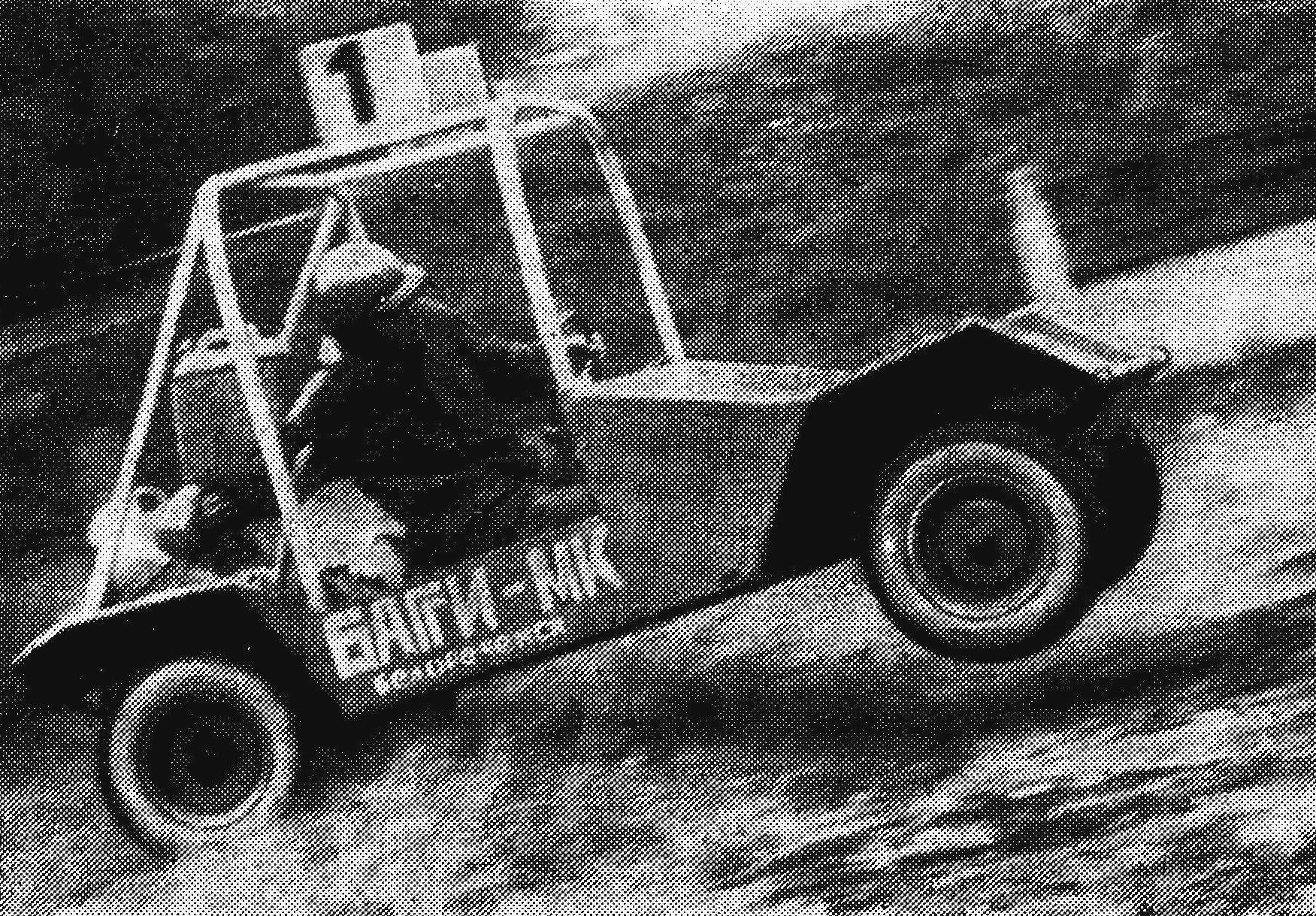 Front suspension — independent, trailing arm, torsion bar, with additional absorbers from the motorcycle IZH-350 or “Pannonia” and a reinforced fastening of shock-absorbers to the levers.
Rear suspension — independent, on the wishbone, With spring-hydraulic shock (converted the rear axle of the sidecar С3А).
Wheel set: internal drive from sidecar С3А, stamped, no alterations; outer — cast magnesium alloy, and broadened, provided to increase the rigidity of the decorative spokes. The tire — chamber, the size 5X10; on the widened rim tire takes the form of the optimal traction. By car there is a possibility of installation of the windshield, windshield wipers and removable awning and doors, making it easy to transformirovalsya in tourist General purpose machine which can be operated on a daily basis. It’s not against the rules of the road and technical specifications.
In General, our buggy “KVP” is shown in figure 1, a structural diagram is in figure 2. There are all cross sections and dimensions of additional parts that form the body of the sport.
Unlike other cars in this class in our buggy not applied the fiberglass. Front and rear hoods are made from the old hood of the GAZ-51, suitably redrawn, and the sidewalls of the body is made of a steel sheet with a thickness of 1.1 to 1.9 mm, curved on Cracovia and welded “dashed” after adjusting to the power elements of the frame.
A COMPETITION FOR THE BEST DESIGN BUGGY-350 CONTINUES
At the start — the car with the words “Buggy-MK, Belorechensk”. Exciting moment: the first starting number, the first swallow, after which, we hope, there will be others, also created by the Golden hands of young technicians in the city of Belorechensk in Krasnodar region. In the construction of this machine was attended by Evgeny Maslennikov, Aleksandr Kulagin and Mykola Rudenko, under the guidance of teacher of school No. 68 Harry Keca. Here is her basic data (in mm):
Overall width….1200
Height…………………….1620
Length………………………2450
Base………………………..1680
Speed max…………..65-70 km/h
Built on the basis of disability motorized С3А. Body with a shell of sheet steel on a frame of steel tubes and angles.