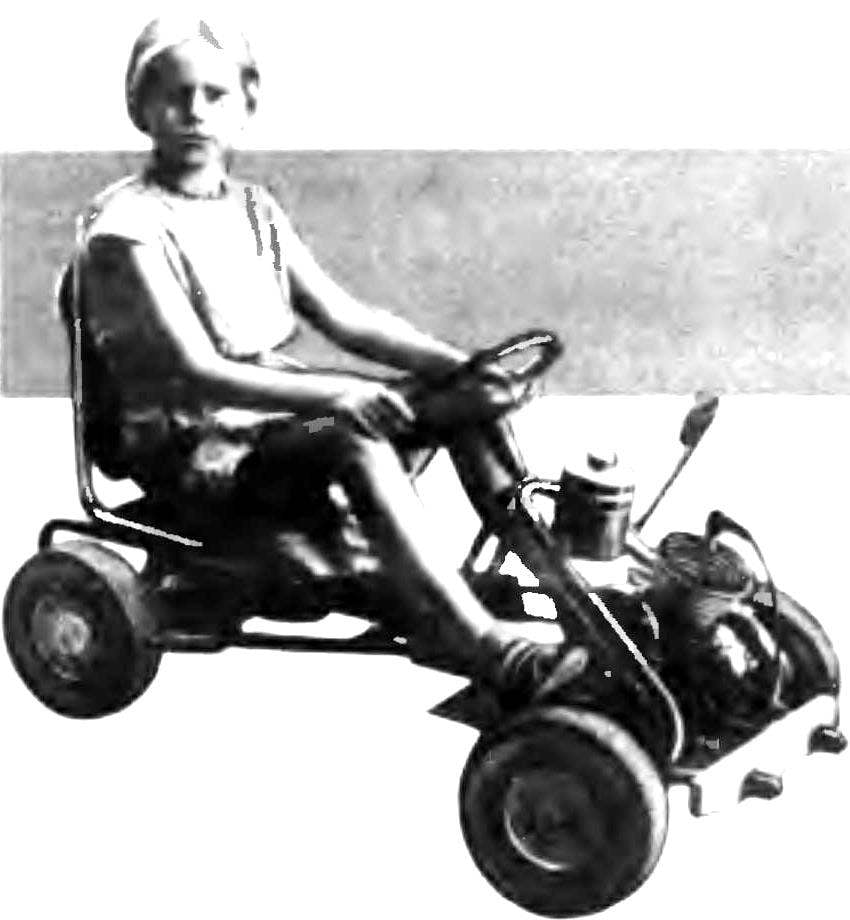 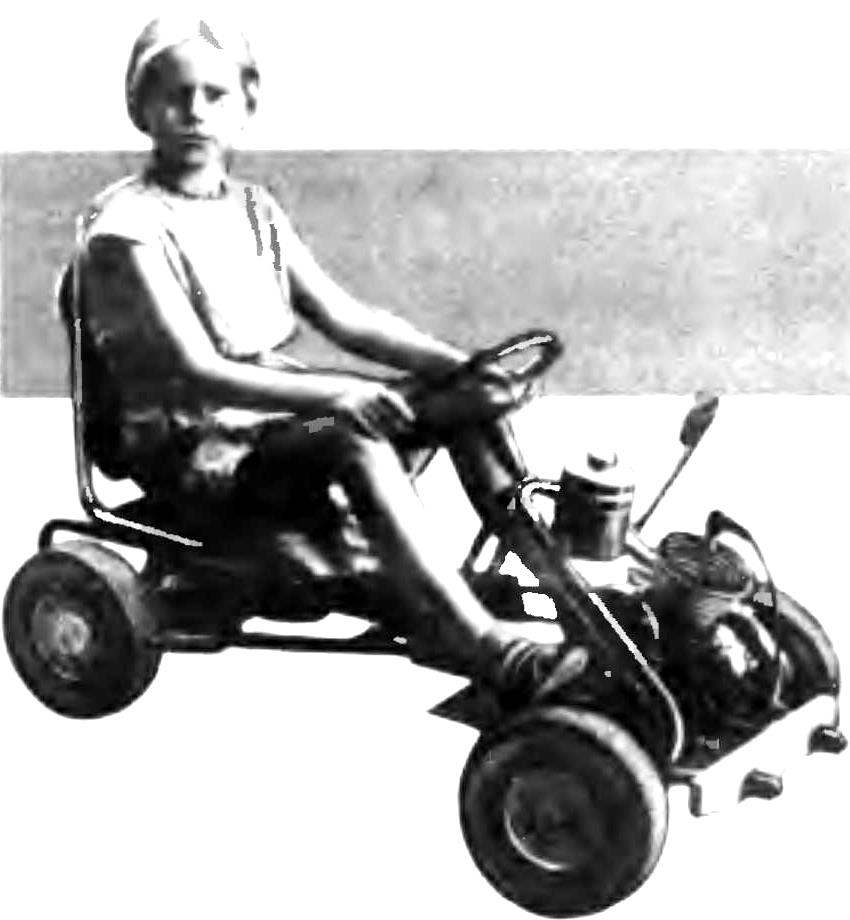 Pedal cars of the type “Card” and “the idea of crossbreeding”, produced by our industry, are very popular with children. But these machines could be even more widespread, when combined with D-6 engine from a motorbike and a bit modified. The result is a real baby sports car.
When my nine year old daughter, Vita (the way, she began to ride from the age of seven) leaves the yard in his car, it is of interest not only in children but also in adults. Wanting to drive the car more than enough. And ride everyone, boys and girls aged 6 to 12 years.
The vehicle speed to 30 km/h is too much For beginners, but there is a simple device which at first can be limited to 10-15 km/h.
Driving a car is not difficult — because of the management bodies of all four: wheel, brake and two pedals — the left pedal is the clutch, and the right of the gas pedal.
To begin movement it is necessary to open the fuel tap, take the car and depress the clutch pedal. Then the assistant accelerates the car is under power not only the Pope, but the 7 — 8 year old child. Now it is necessary to include the clutch, press the gas pedal… and went. Speed depending on the skill and experience of the driver is installed a limiting device. To stop the car, you need to remove your foot from the gas pedal, while the throttle completely block the access of gasoline to the carburetor and the engine will stall. Finally to stop the car by pulling the brake lever upwards.
If you already have such a pedal car and you want to refit it, we need to acquire engine D-6 or D-8, benzaken and cable budenovskoy shell, from which you can make two wheel drive. Gas tank 1 liter of fuel is easy to make from any suitable metal or plastic containers. 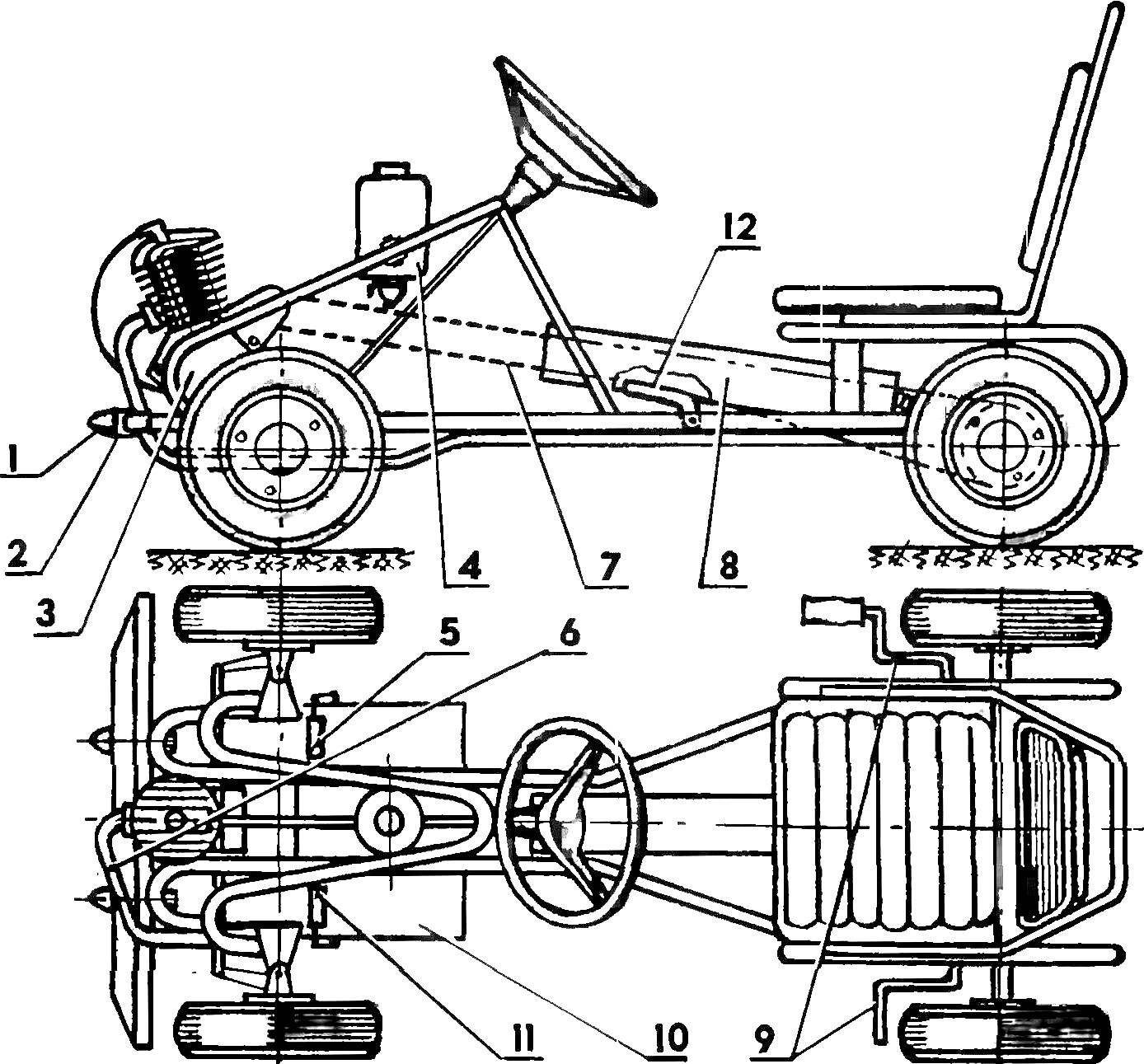 Kids car with engine D-6 on the basis of the pedal cars of the type “Card”, “Leader” or “the idea of crossbreeding”:
1 — rubber buffer cushion, 2 — front bumper (U-shaped aluminum profile) 3 — D-6 engine, 4 — fuel tank 5 — pedal throttle control carburetor engine, 6 — exhaust pipe 7 — Bush roller chain, 8 — protective cover, 9 — braking system 10 — Playground for feet, 11 — clutch pedal 12 — tensioning device.
Mechanical work for conversion into a “Map” is not so much, but still have something to remove, add, modify. First of all it is necessary to understand. In pedal car front wheels track wider than the rear, this is done to ensure that when cornering the wheels do not interfere with the rotation of the pedals. In this embodiment, it is useless. The machine will be more compact if the front track and the rear wheels are the same. So the front U-shaped beam is truncated at 30 mm on each side. Are marked and re-drilled two holes Ø 8 mm at the steering knuckles of the front wheels. The tie rod is also shortened by 30 mm on each side, and is not from below, but from above.
Now we have to make a platform for the feet; it is mounted foot controls. The site itself is a sheet of aluminum with a thickness of 4…5 mm, a width of 315 mm and a length of 275 mm. It is located under the tubular frame and a U-shaped beam and enters the beam until it stops (it is only necessary to make a pre-cutout under the steering stem). Through holes in which bearings are attached to the pedals, it is necessary to mark and drill the four holes Ø 5 mm and fix it with M5 bolts with a length of 28 mm “countersunk” head.
For installation on the Kart engine took welded a bracket; a motor attached to it on bolts M6 hex head 18 mm. in length Under heads of the bolts are gavernie goals. For mounting use the threaded holes where before they were wrapped fastening. The engine is set in place straight, so that it is defended from the steering stem 4-5 mm, and the right side had a gap with the arc of the frame in 3 mm. Four holes Ø 5 mm are placed together with the plate bracket. Then drilled two holes on the U-shaped beam together with an area for feet, and two more, also in conjunction with the platform is a tubular frame. 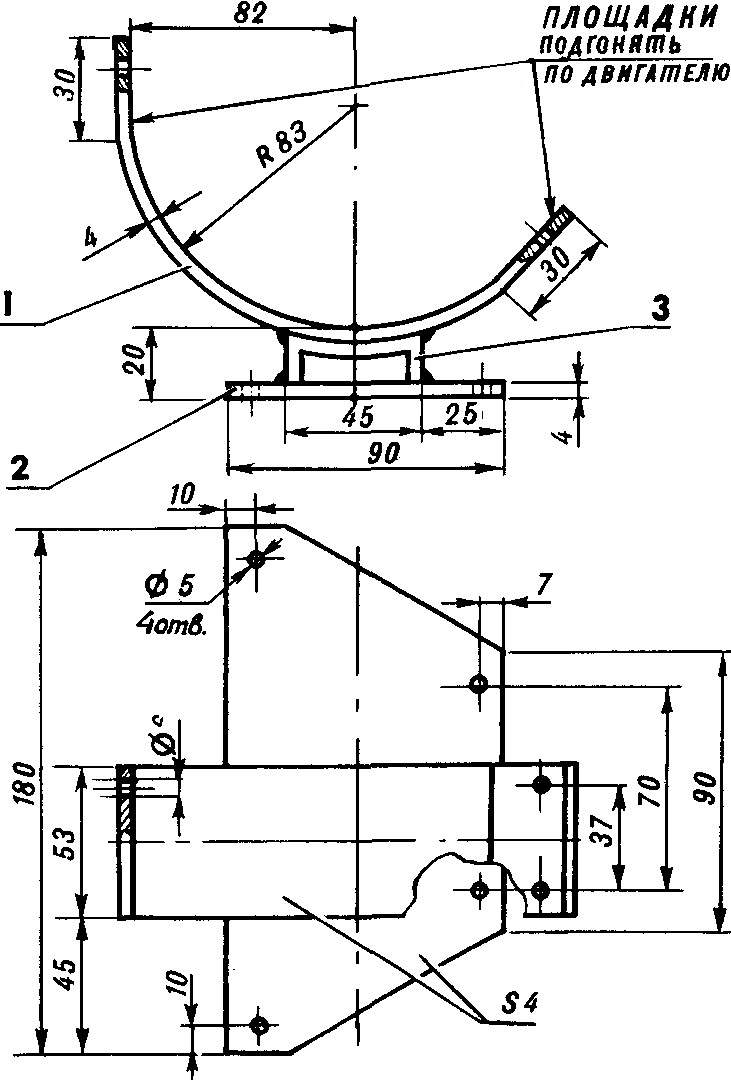 Bracket engine:
1 — arc (steel strip with a thickness of 4 mm), 2 — base (a steel sheet thickness of 4 mm), 3 — spacer (steel channel with a wall thickness of 4 mm).
A bracket fixed to the frame with four M5 bolts in the rear holes between the bracket and a U-shaped beam, put two grommets. Thus is achieved improved retention of the front axle to the frame.
Foot controls have the same structure, the only difference is that the gas pedal is provided with limiting its move device.
Pedal veloplivd cut, and in the leading asterisk on a lathe rastaquouere hole Ø 30 mm.
Made of aluminum machined adapter ring with a diameter of 62 mm, which is put on driven sprockets from the left wheel. Through the depression formed by the transition ring and the sprocket, mark and drill three or four holes Ø 5 mm, together with the ring and the driven sprocket; the connections — with M5 bolts, nuts and lock nuts. The drive chain is closed by a cover, which previously stood on the car, he just cut off the front part. Master and slave sprockets must be placed strictly in one plane. The chain does not SAG and does not touch the machine body, provides the mechanism for tensioning the chain, comprising an oscillating chute and a plastic spring. All this is located on the bulkhead between the pipes in the middle of the machine. The degree of tension of the chain is made by changing the thicknesses of washers between the front of the engine bracket and tubular frame.
Wheels converted several plastic bushings in them are replaced with bronze, three wheels (both front and left rear) are of the same design. They need six bushings of bronze, which should be tightly inserted into the hub of each wheel on both sides. Then on the sleeves mark the centers of the four holes that are drilled in conjunction with the wheel. Then the sleeve tightened four studs with nuts or bolts M4 with a length of 50 mm. Space between the sleeves is filled with grease (tsiatim, technical vaseline). 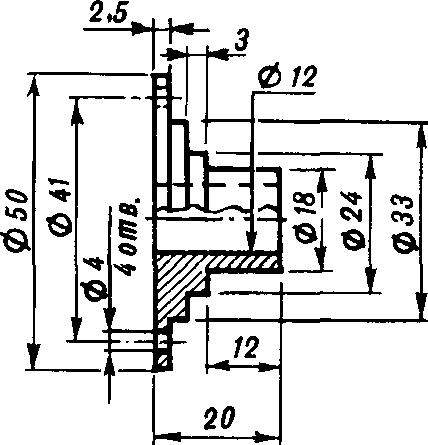 Sleeve freely rotating wheels (bronze).
For the rear drive wheel, you need only one sleeve. For hard links it with the wheel you need to cut four slots in the slots of the wheel. It also drilled four holes through which the wheel studs tightened with a flange, fixedly mounted on the axle.
Now it is necessary to grease tsiatim-axis and set the wheels in place. Pre-spacer plastic bushes are pruned to the required size, and then put the washers and zaspirtovannaya wheels.
The exhaust pipe consists of two elements, bent from tubing Ø 25 mm Below the pipe bend, they are stuffed with sand, then heated in a forge or with a blowtorch and bend, fitting for the place so that they do not touch the machine body. Dock with a cable tie and attach to a U-shaped beam at the bottom. Previously the joint must be wrapped with two layers of foil. In the middle part of the car exhaust pipe is closed by a visor made of aluminum. The muffler is under the seat and is attached to the tubular frame bracket made of two-millimeter aluminum strip. To protect the engine from possible attacks, since the latter protrudes beyond a frame made of spring-loaded bumper from a U-shaped dural profile, fastened by two M5 bolts to the tubular frame. The springs are located between the inner part of the bumper and the frame. To mitigate the possible impact when hitting the object with the bumper attached two rubber cushions. 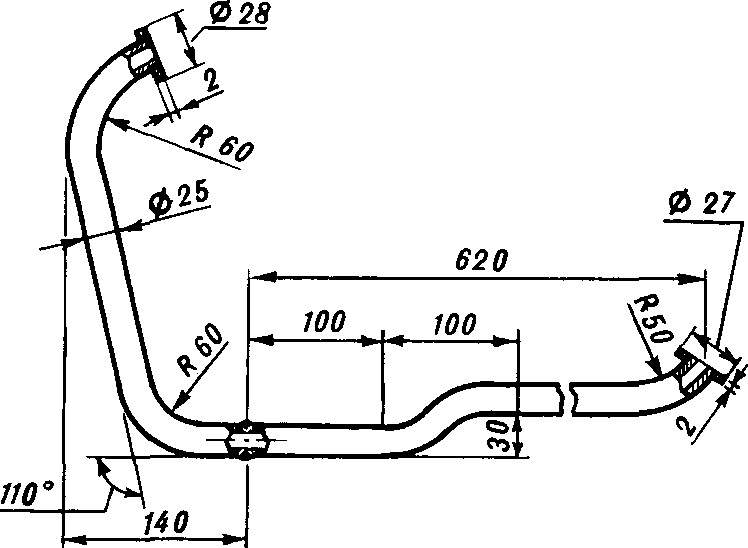 Exhaust pipe.
The car has a manual clutch that enables the driver to release the foot during movement of the car with the engine off from a hill or towed. The device consists of a lever pull and latch; a pull is made of steel wire Ø 5 mm. the device Operates in the following way: the driver presses his foot on the clutch pedal, the lever moves itself, while the latch is rotated around the axis (under the car) and enters between the arm and the platform for the legs; wherein the foot pedal is pressed. To re-engage the clutch, move the lever from itself.
Pedal throttle control:
1 — lever, 2 — bushing (bronze), 3 — lever axle, 4 — oneplace lever 5 — adjusting screw IAC motor, 6 — the focus limiter maximum throttle, 7 — wire throttle, 8 — polik (sheet aluminum), the 9 — rubber tube, 10 — U-shape beam.
Car has no shock absorbers. To drive her uncomfortable, instead of the plastic seats is better to make a chair the same size of semi-soft chair with a cushion on springs and foam rubber, obtenus his leather.
This design does not sample for the repetition, but rather an idea. Of additions and changes a lot, it all depends on your taste and possibilities, but creating a car is most feasible and cheapest way to acquaint the child with the device of the engine crew and the basic skills of driving.
The car is designed for driving on the grounds of the yards, sidewalks, paths, gardens with hard and smooth coating.
You can’t leave this car on the road or streets and places of possible appearance of vehicles.
Y. ANOSOV, Gorlovka, Donetsk region.