It turns out that the bike besides one of the most ancient modes of transport: it is depicted on the recently discovered risuna Leonardo da Vinci related and 1495, that is, will soon celebrate its quincentenary.And at the same time, the bike is forever young, because with each new development it seems to be reborn. Today there are more than 20 thousand patents for a variety of venoconstriction! And the search continues. And it involves not only professional designers, but also a large army of Amateur enthusiasts and fans of pedal techniques, including readers of our magazine. The direction of this search are diverse, but among them we can highlight some General trends.
“K a R m a n n s e”. Despite the fact that in recent years the industry has mastered the production of folding bicycles, many Amateur development aimed at improving campinoti two-wheeled machines during storage or transportation. Affects, obviously, dissatisfaction with the same type of folding scheme, the desire to find other original solution to this difficult but alluring task.
“The picture I painted your project,” says our young reader from Vladivostok Dima Kovalev. It offers rezhimno-sliding design universal bike. In contrast to existing schemes in his version of the spinal beam has a connecting loop lock: one
the rear half is smaller in diameter than the other and is inside the larger, fixing with two screws on the bottom. Letting go of them, it is easy to separate frame, having two separate half of the bike easy to transport. 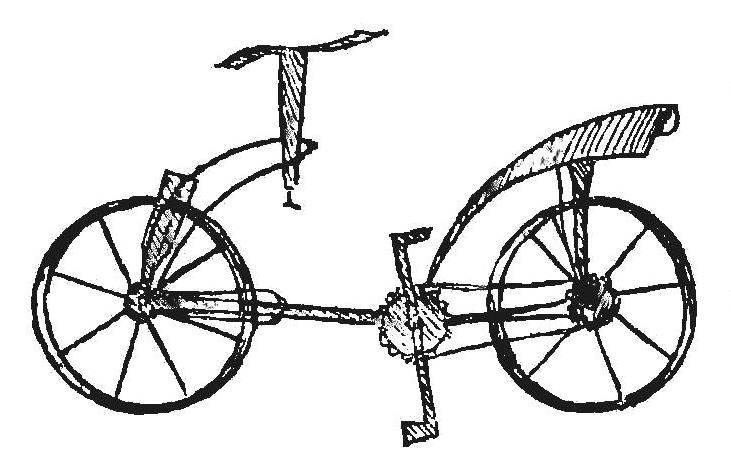 Fig. 1. Hard to believe that this image of a Bicycle made almost 500 years ago.
Originally solves the same task is a great supporter of malokontroliruemyh V. Askin from Tashkent. His car also is not a traditional castle, but there is no connector, however the bike has the opportunity to develop. However, the compactness is contained in its very concept: the front and rear wheels as close to each other tan that the rear plug is almost directly connected with the front fork of a small bridge, which is the seat with a comfortable backrest. Front fork is also unusual: it functions as if partially dissected and enriched with new. So, on top of missing front steering — its role began to perform… feathers plugs, not the ending from the axis of the wheel and extended forward and bent upwards — here is the welded wheel. And in the bend of feathers mounted carriage with pedals and a chain drive to the sprocket of the front wheel, took thus some functions of the drive back. Finally, the hinge of the front wheel is hinge folding bike. 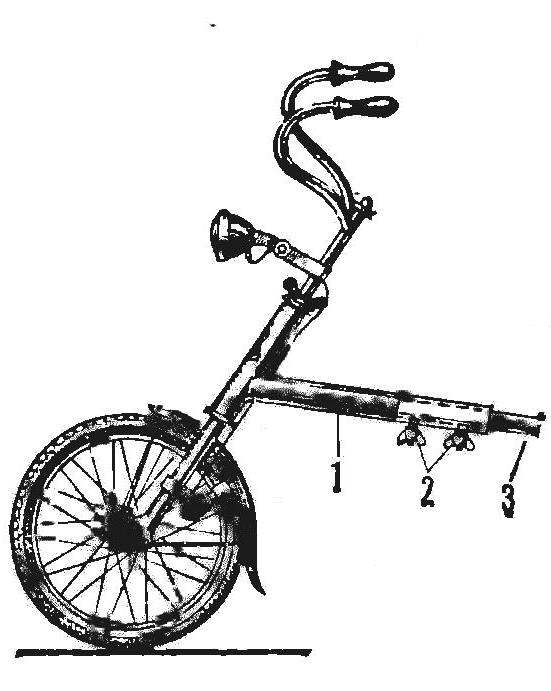 Fig. 2. Sliding the bike:
1 — the front half of the frame, 2 lock screws, 3 — rear half of the frame
Maximum compactness when folded made 0. Vasiliev of Leningrad. Your microblasted he gathered on the basis of “quilted” (a small wheel from a child’s Bicycle or scooter), using almost samokatnaya and frame — horizontal, low position, making it out of the road and kids Bicycle “the Schoolboy”. Despite the small size, landing it corresponds to the usual road, as microblasted the same distance between the axes of the wheels and the height of saddle and handlebar. The main trick of this folding car is that the lock is not on the horizontal part of the frame, which remains unchanged, and in the vertical bar going to the seat; in addition, the folding involves many components and subassemblies. Not set ourselves the task to quickly bring the bike in compact form, 0. Vasiliev does this in several stages. First, the front wheel is rotated 180°, removing the under frame. Then loosen the hinge and placed on the frame the wheel. Unscrew both screws of the lock and uasin seatpost rack, giving her the opportunity to go on the frame. Finally, the trunk is detached from ucoin and tilt on the rear wheel. Thus, the dimensions of the folded bike are extremely small — 1100X400 X150 mm and a little more children’s sleds. 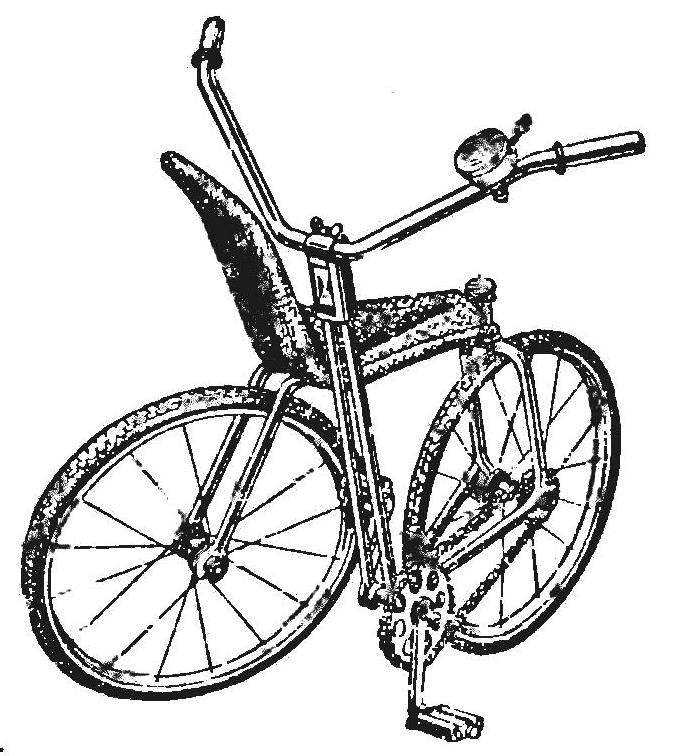 Fig. 3.Swivel folding bike
Is it possible to achieve compactness of the bike at all without folding? A. Medvedev of Gorky answers this question positively. He took a regular road bike. Cut him from the rear portion so that the seat parallel to the rack frame you can set another to the helm. Front wheel and fork used from a child’s Bicycle. The seat on the “paleolatitude” is the trunk. It is clear that this machine needs no folding, pascolo is one-half the normal bike, with virtually no losses while maintaining driving performance.
The tandems. The industry is just eyeing him, but fans are actively building. “As for the tandem, many years ago, I with pleasure would change on your bike” — wrote to us responding balanceto ka, the engineer-designer from Tartu Yuri Fedorov. Great interest to two – and even triple machine clear, if we consider the revival in recent years of touring and growing popularity of family Cycling. 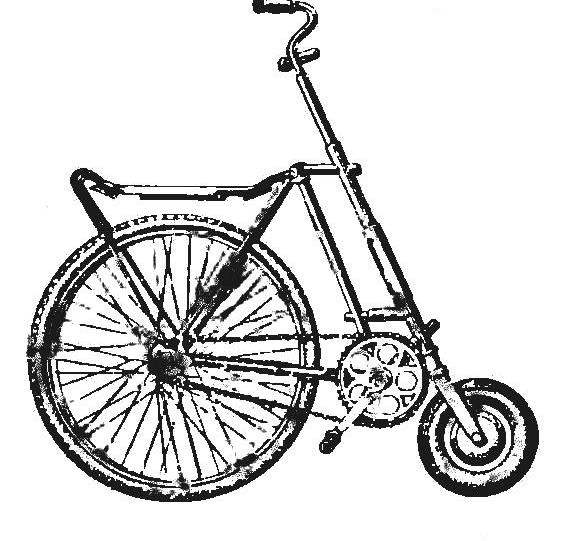 R and S. 4. “Half Bicycle”
We can say that the Amateur construction of tandems goes in two directions: creation of two “monoliths” with a single welded frame and an articulated three-wheeled variants, composed of two conventional bicycles, while preserving the ability of their Autonomous operation.
For the first option usually take two old the same type of frame and adjust to each other: the first cut upper and lower fork of the rear wheel, while the second, on the contrary, the node of the front wheel. It remains to weld the workpiece, bottom between the slide and add a tubular spacer and weld the second wheel: tandem ready. This was the route we went, creating their own design, I. Dremin from Taishet in Irkutsk region, K. Zemlyanskaya from the station Tobol, Kustanay region, A. Kostik from Vologda, Kapranov from the village of Kara-Balta-Kyrgyz SSR, and many others of our readers; their tandems look like brothers and differ only in the details.
However, most supporters of this option note that often nekotorye parts and components can not withstand the increased loads that require strengthening or replacement.
Yet so many choose to make a tandem from two regular vlamalin. Moreover, attempts are made to connect them simplistically: the front fork of one set per axle rear wheel the other. However, this method does not provide the necessary reliability. More promising various hinge joints under the steering bushing rear bike mounted emergency trunk front (a few of those options we have already talked . In General, the hinge-section tandems test load is almost the same as the original bike: it is double the weight of the cyclists and the effects road conditions have on two feet-wheels, as the “monoliths”, and three means, and the impact less.
A curious variant of this car offers Moscow engineer A. Puig-kowski. His bike front wheel not removed: the lock plug has two flanges, whereby the wheel can be raised just in front of the wheel and connected by a flange with the returned flange hinge Assembly on the boot front of the bike. The advantage of the design in the rapid return tandem in monovariant, which is especially useful in, say, a tourist hike. Development A. Puchkovsky recognized by the invention and marked by the copyright certificate №1008066. 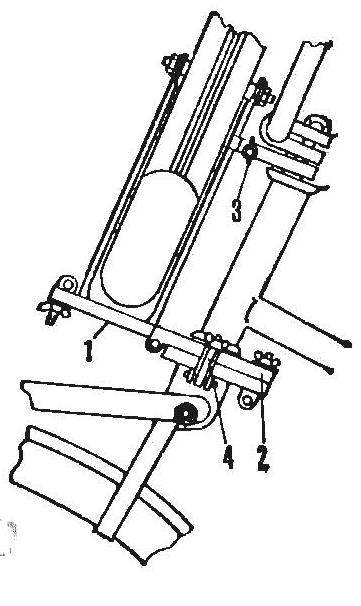 Fig. 5. The bike lift the front wheel:
1 — predstavili. 2 — lock, 3 — wheel lock is raised. 4 — node connections in tandem (wheel raised. bicycles connected).
Velomobile? In the previous review (No. 3, 1984) we kV randomly called the Bicycle the most sustainable form of transport, in any case, on dry land and riding on it does not affect the environment. But today will have to touch in one direction in malokontroliruemyh that falls out of this definition, namely: the equipment of the Bicycle engine. Isn’t that contradictory combination: two-wheeled muscle machine and motor. It would be like to replace the sails on a yacht or a windsurfer. However, such a tendency exists and finds its fans. V. Novikov from Novokuznetsk wrote us, very pleased with what has equipped its road racing(!) bike engine D-6.
The most attractive for “motorization” were foldable designs, especially the popular “Ka-mA.” Her mount on the spinal beam frame put the engine D-6 engineer-economist from Ust-Kamenogorsk V. Yudin; with the location in place of the rear trunk — B. Silvanovich from the city of Zavodoukovsk, Tyumen region: – drive the front wheel. Belenkov from Ufa; V. Dochev from Zheleznogorsk, Kursk region took out the engine with the rear wheel outside the frame, a kind of “console” connected to the rear wheel fork and is provided with a shock absorber. Below we present one option of the engine mounting in another common folding Bicycle “Desna”.
Not to mention also an ingenious solution applied by the Muscovite V. Sirinavin when equipped with a motor of their “Salute”: they developed a simple coupling by which the foot and motor drives can act independently or together, which simplifies starting and running the engine. 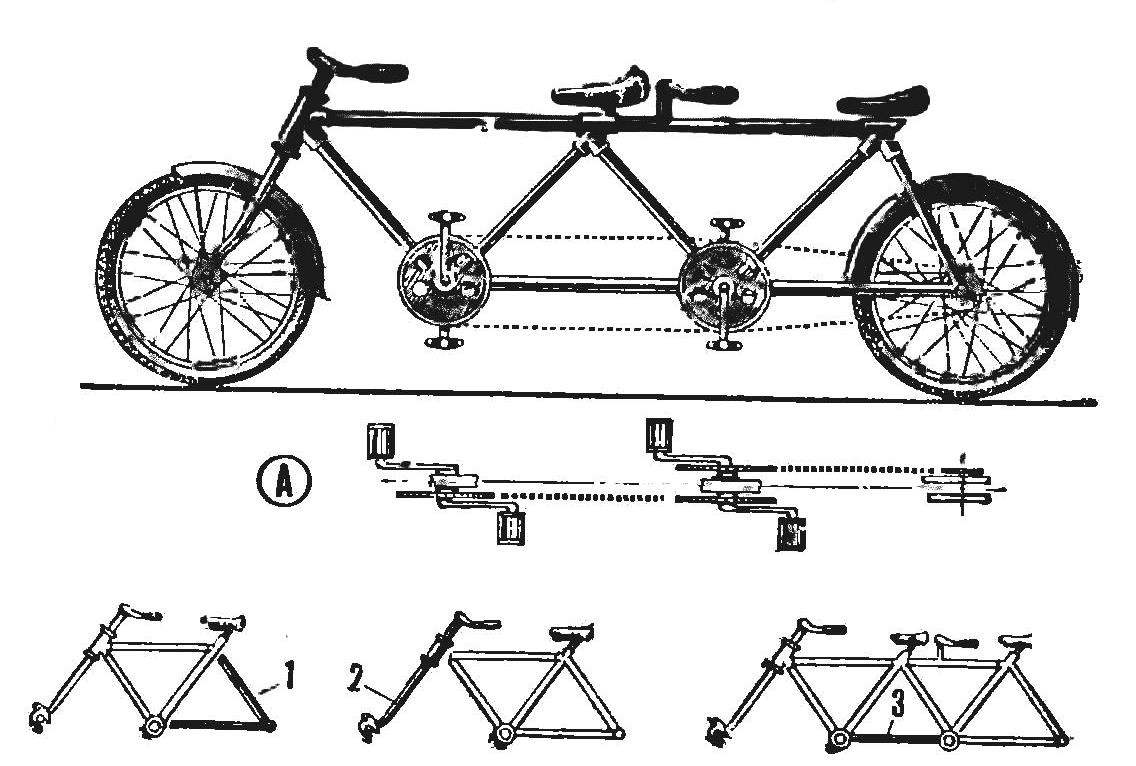 Fig. 6. Tandem-monolith and its Assembly of two frames:
1, 2 — delete items. 3 — additional element: A — diagram of the transmission on the rear wheel.
Certainly, it is pleasant to note the manifested in these technical solutions, ingenuity, and constructive findings to our readers. It’s a pity that the bike loses its most important in these times to be an effective trainer and efficient means of dealing with the insidious disease of the century — lack of exercise — muscle inactivity. Don’t lie to yourself if necessary, disassemble the motor-drive unit: once installed it does not withdraw.
Another thing to come up with a reliable but simple and quick method of installation of the engine on the cases of really urgent need for it. However, it seems better to focus efforts on further improving pedal option bike-cars, the opening of its “non-motorized” reserves.
The word for you, the reader! And what do you work? After the invention of the Bicycle continues, then, ahead of a new meeting with an interesting development of the treadle machines.
B. RESNI