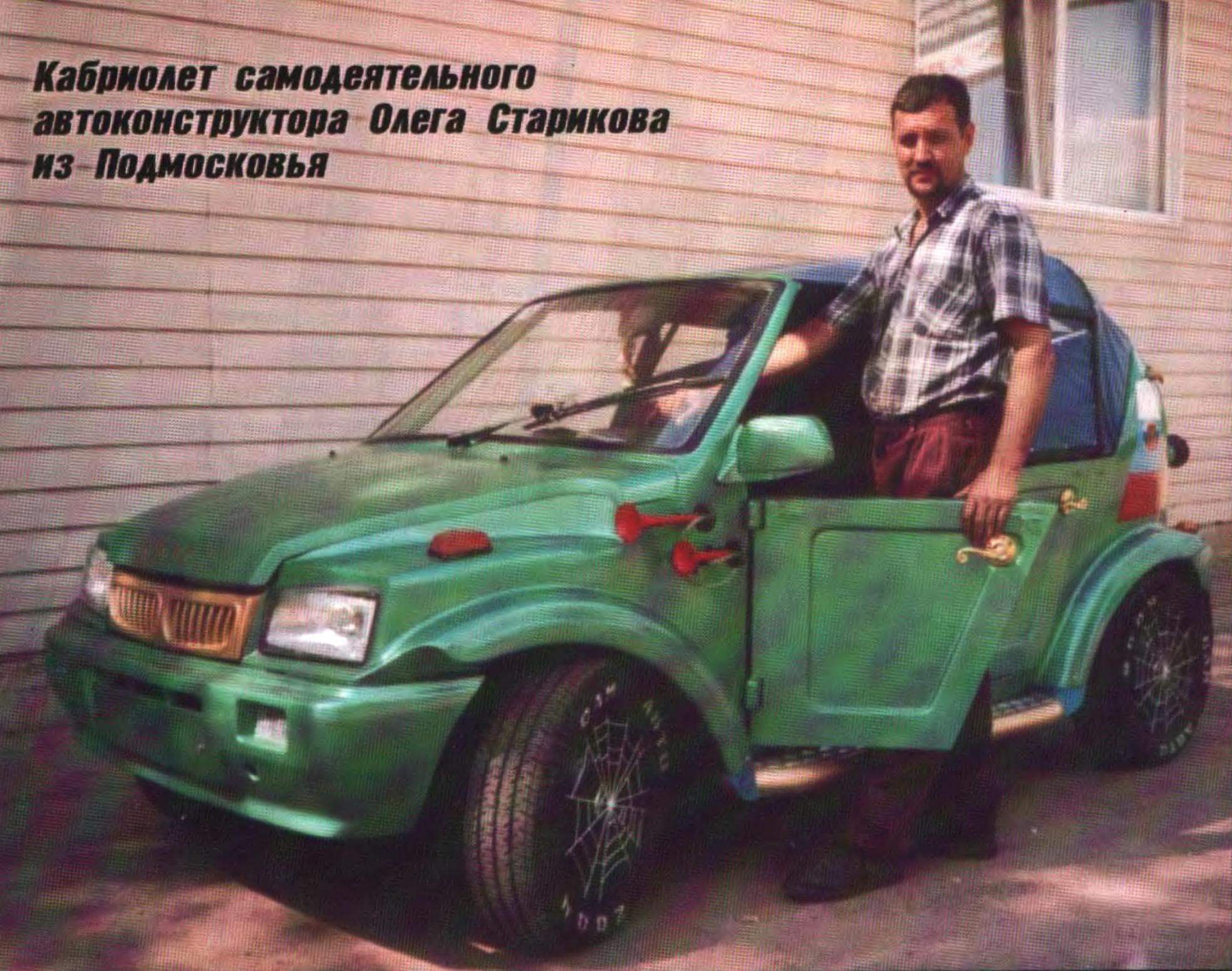 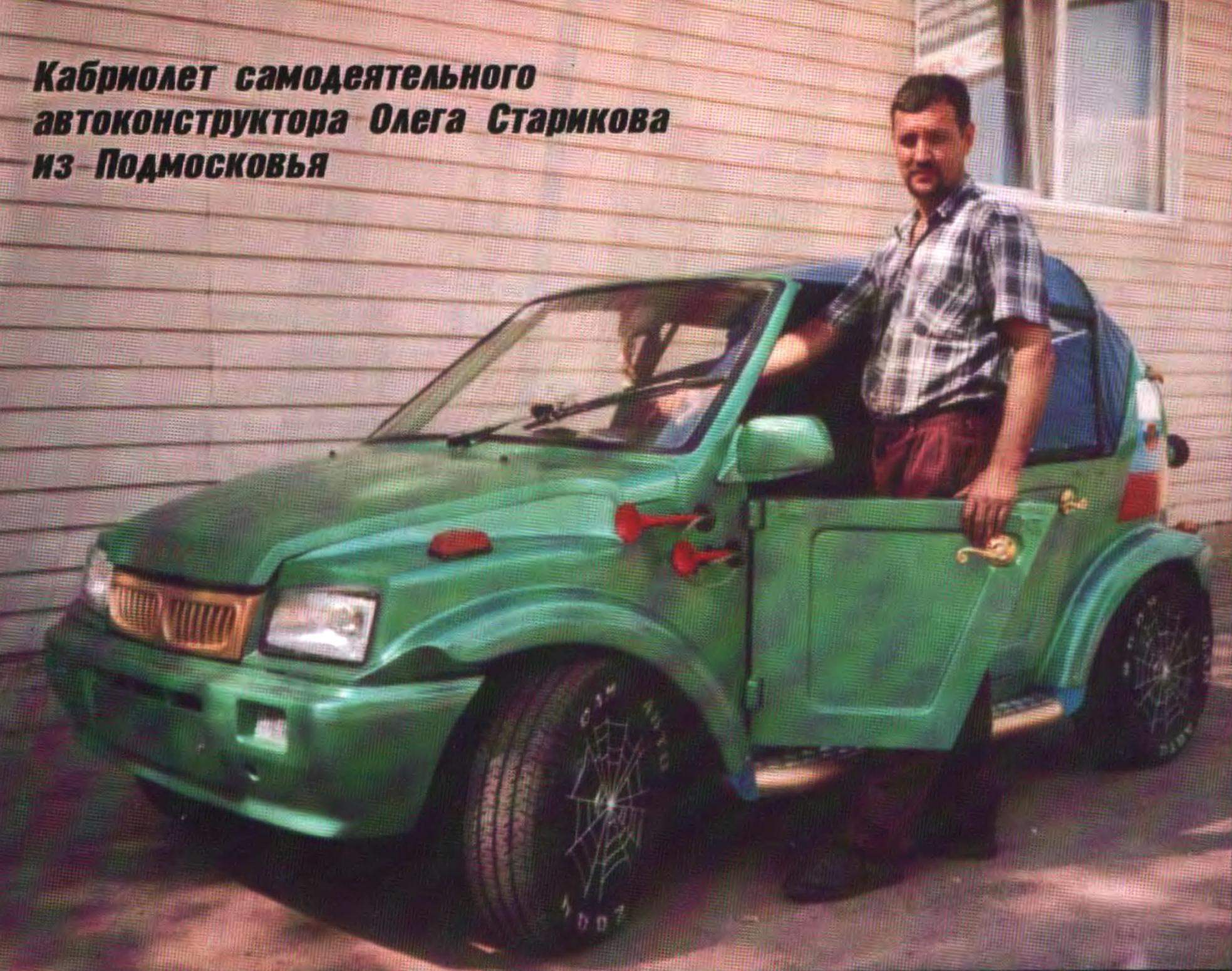 Oleg Starikov — Amateur autoconstructor enthusiast from the little village Ostrovtsy — know all the local fans of technology (and it can be safely attributed the majority of the male population of the village — from small to large), which is often jokingly call him “Mr. fix-it” or “Kulibin”.
Know the name and the readers of our magazine on the publication in the “Modeller-designer” № 3, 1999 — built Oleg Starikov the jeep pickup, called “SIMOT”. Today is another handy homemade car under the same name, but with the index “2”. The name of the symbolic machinery. The author has compiled it from the first letters of the surname and names of family members (Starikov: daughters, Irina and Marina, Oleg and his wife Tatiana) in gratitude for the understanding and patience — because the lion’s share of free time for a long period, he was paid not to them, and create machines.
After I built a large and practical jeep, which operated for several years, I wanted to make another car — a small pleasure with a top opening, and at the same time to continue experimenting in the field of engineering and design. And a little more than a year, the same car appeared.
The design was chosen such that in the machine combined the elements of modernity and antiquity, or, as they say — in the style of “kitsch”, which translated to English means “shift styles”.
Took the car GAS-69 and the “Eye”, although from their previous appearance in the end is little left. 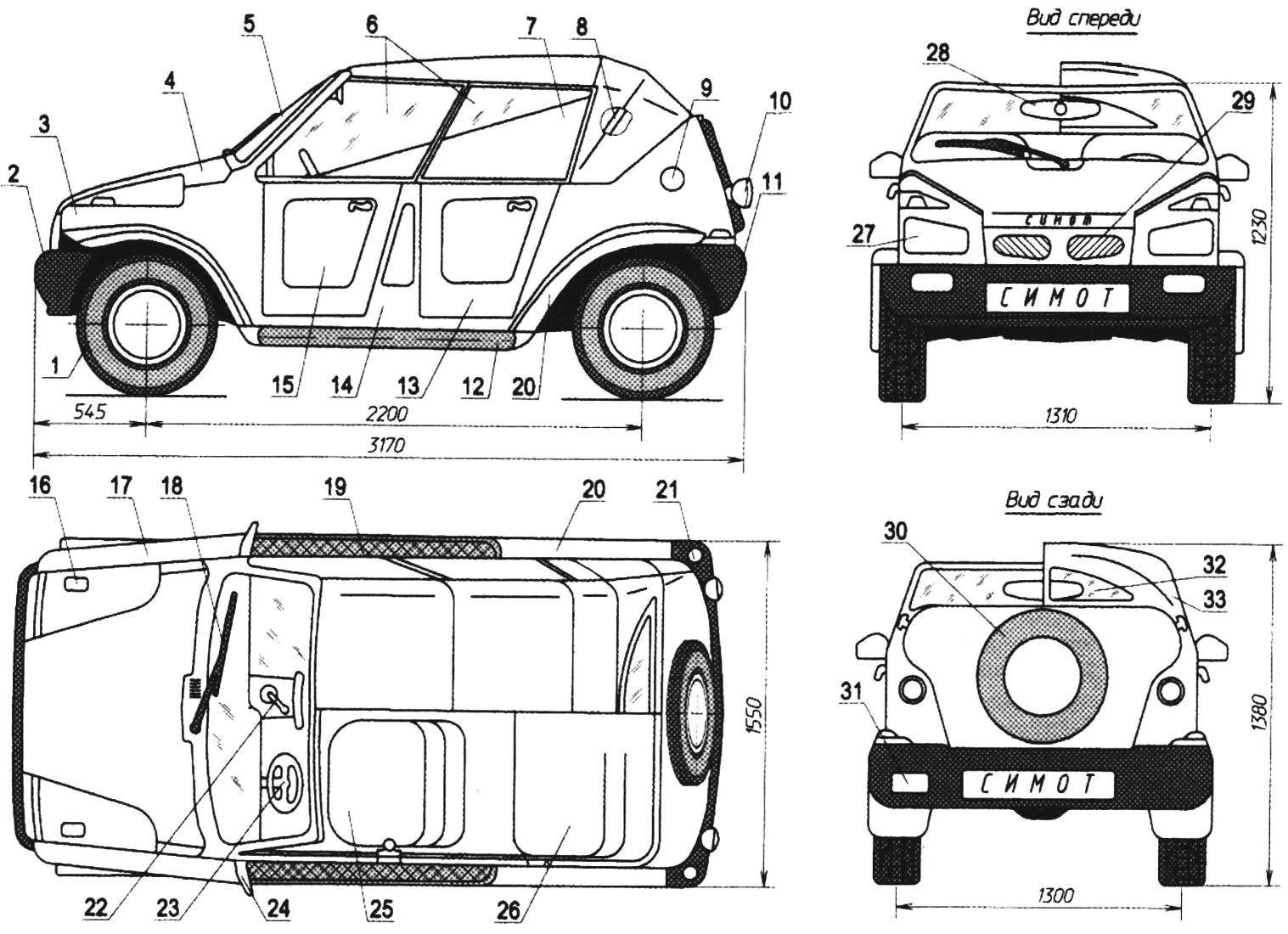 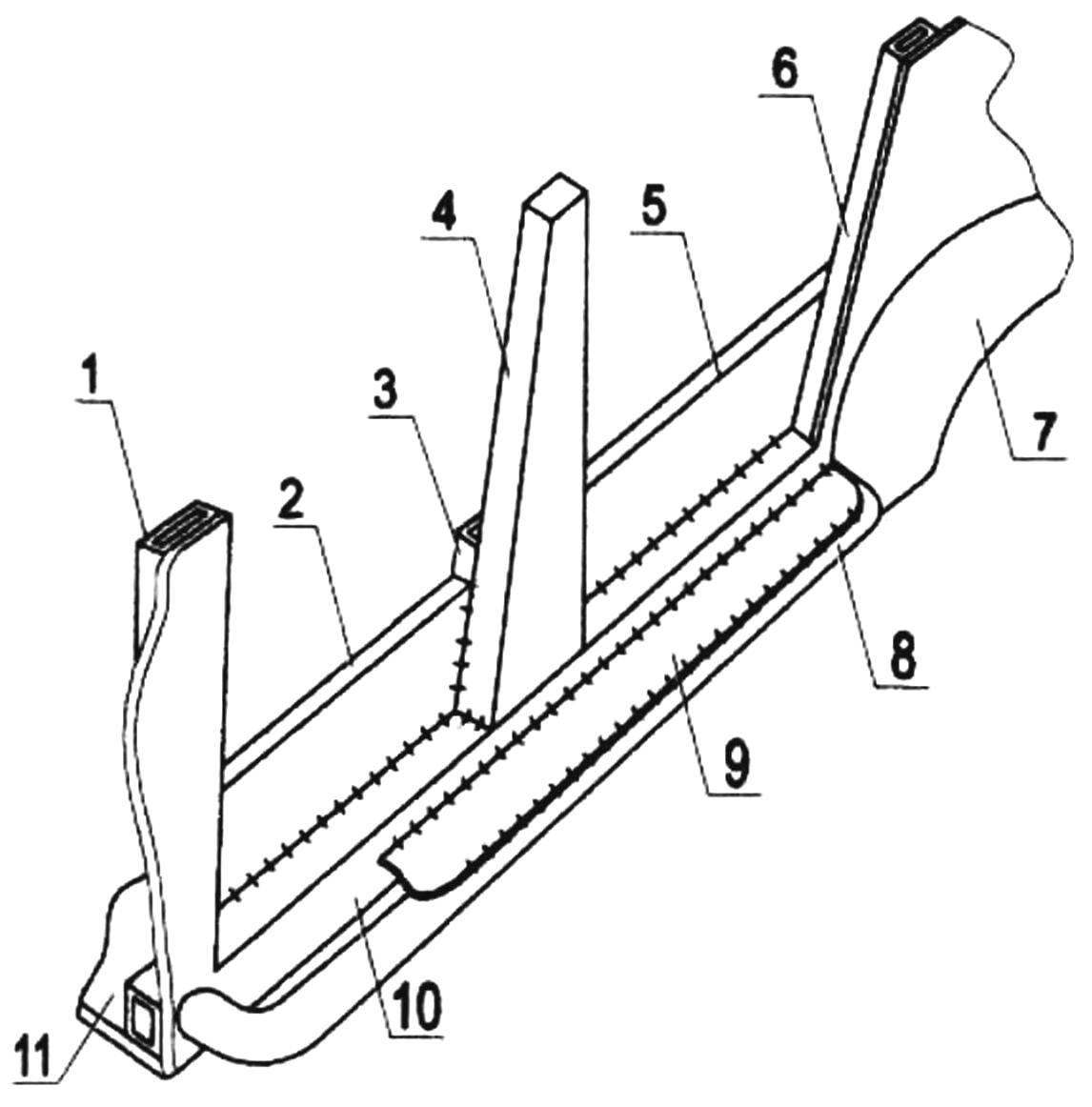 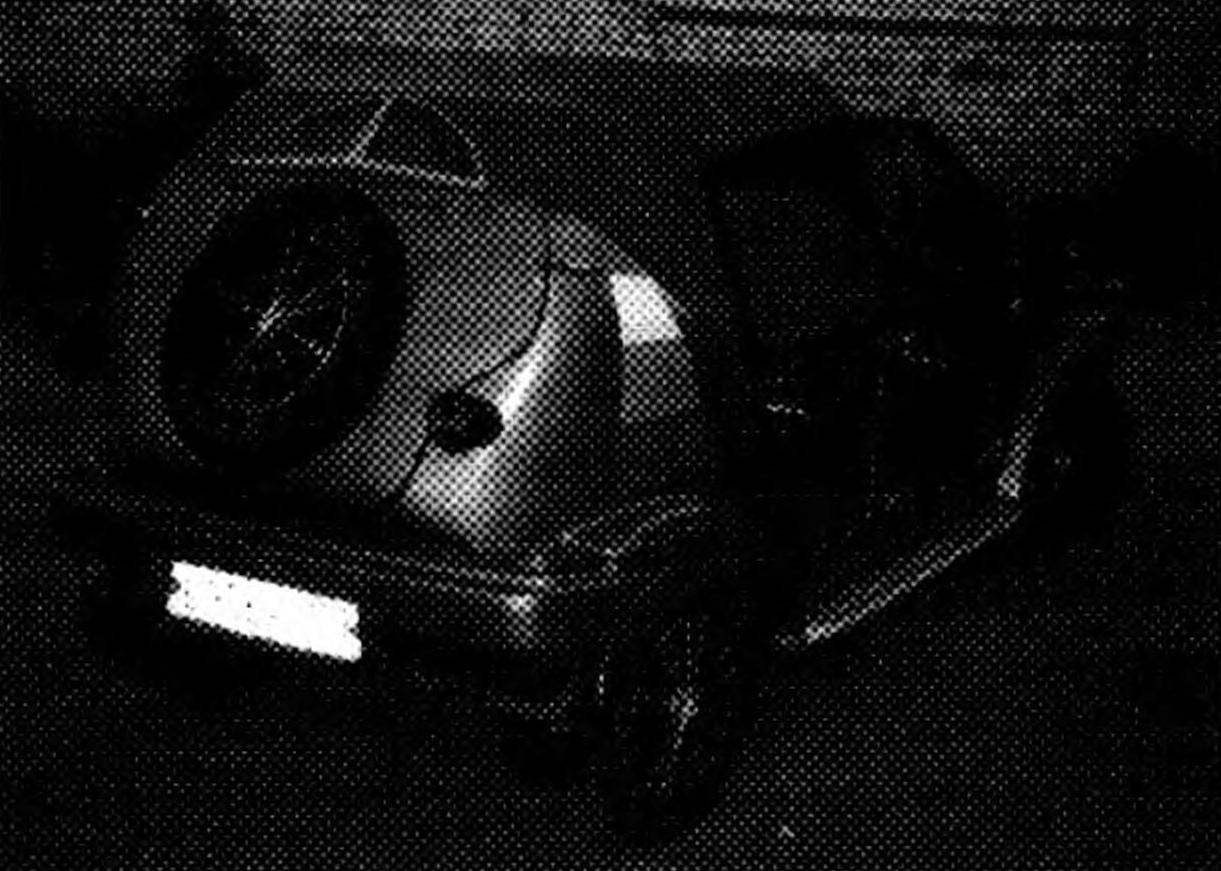 From this angle, as, indeed, the front, the similarities with the “progenitors” — “okoy” and GAZ-69 is not visible
From the “Okie” used mechanics: engine, gearbox, transmission, suspension and controls, brakes, clutch, steering gear.
But the wheels from the “Okie” did not satisfy me take on small asphalt roads is a risky business. So I decided to replace them Zhigulevsk — they not only increased the flotation machine, but also gave it a more impressive look. For this I had to make some alterations in suspension: front wheel hubs and brake drums rear (“Oki” rear hub is made as a single part together with the brake drums) set the adapter. Thus some increased track, front and rear wheels that slightly increased load on bearings and axles, but has a positive impact on the stability of the machine.
It was clear to me even without calculations that the open body (like the Phaeton or convertible — who you like more, I myself between them are significant do not see the difference) compared with the body having a roof, required to increase the rigidity of the floor and especially the thresholds. I have tried to provide this fully and even, as suggested in abundance. So, the floor made of steel sheet 1.5 mm thick. To the rapids in the middle of the first welded door pillar (GAZ-69). At the bottom they are quite wide, and therefore provides additional strength to the thresholds (and hence the body as a whole) in the most intense place. The very front is additionally reinforced from the inside of the body welded to it, the threshold and the floor bracket-a buttress of steel (1.5 mm thick) box section. Thresholds in doorways strengthened and even extensions (or, in Maritime terminology, the coamings) of the bent half of the same steel 1.5 mm sheet from which made the floor and the buttress. Height extensions are possible. just not interfere with the landing of the driver and passengers in salon. The coamings welded to the sills and pillar from the side of the cabin, so they don’t interfere with closing doors. And all this from the outside along the rapids also made the footboard, frame and the base of which is steel pipe with outer diameter of 50 mm. steps are made of corrugated steel sheet with a thickness of 2 mm and is welded throughout its length to the sills and the pipe.
In addition to the enhanced rigidity of the lower part of the body “Phaeton” demanded the passive safety on the upper level. Constructive solutions in this respect was two: strengthening the windshield frame and installing tubular high-arc, safe behind the rear seat backrest. Another arc of safety I think to install and over maidenname stands — without it the car doesn’t register. 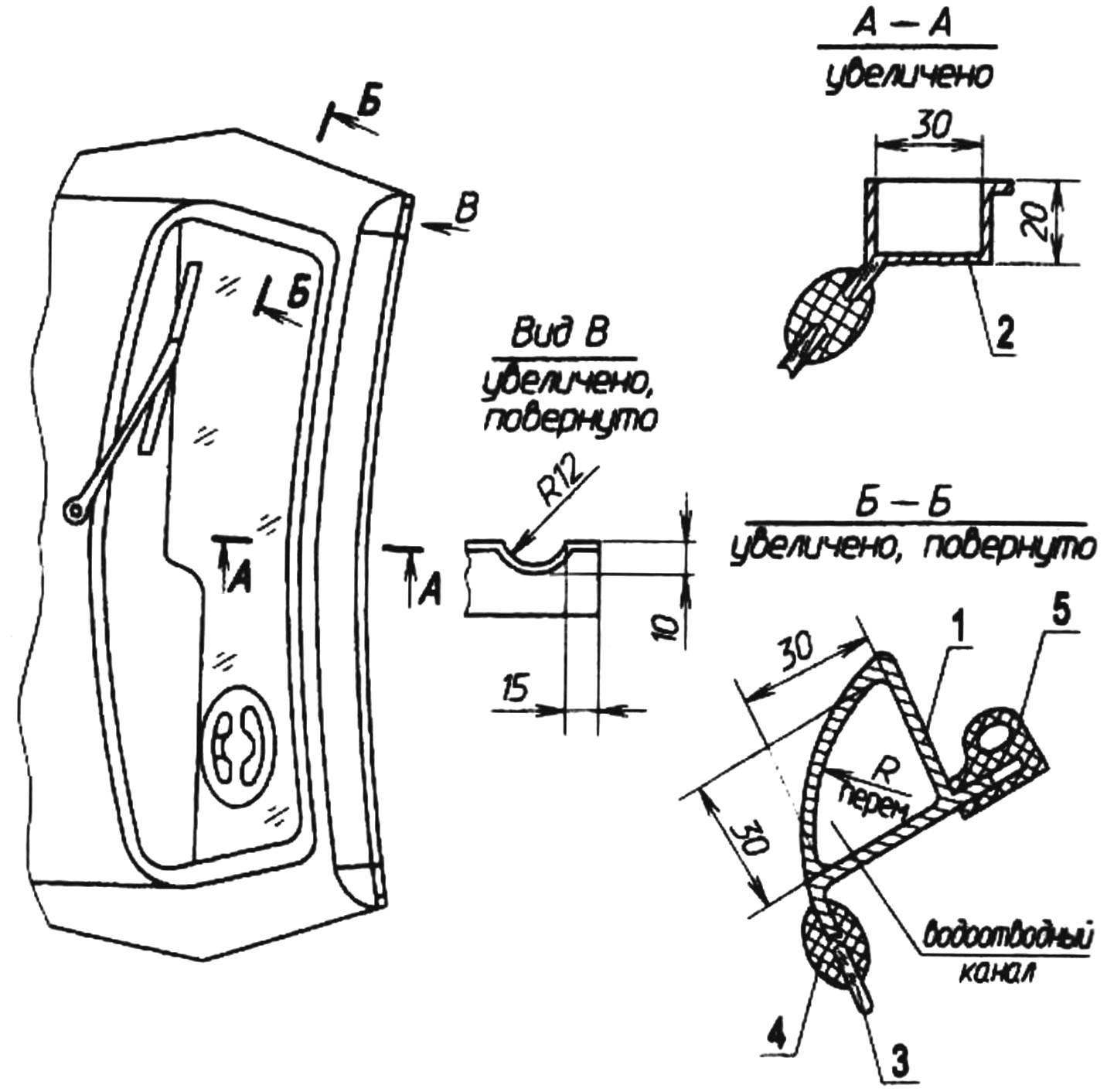 The drain in the windshield frame:
1 — stand with the drainage channel; 2 — jumper with a groove for the front frame of the frame of the awning and tap water; 3 — windshield; 4 — uplotnitel-mounting rubber windscreen; 5 — the rubber seal of the doorway 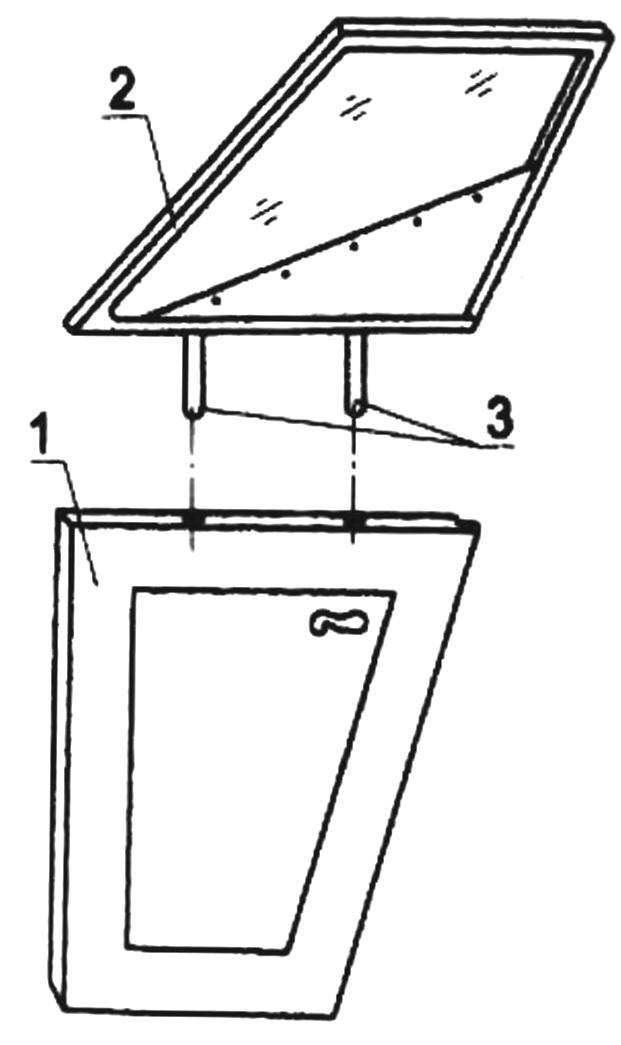 The scheme of installation of the side Windows on the doors:
1 — door; 2 — window (frame with glass and panel): 3 — pin Ø10 (2pcs)
Stand the windshield frame homemade, in cross-section have a triangular shape. In addition to direct destination, they still perform the functions of drainage canals for water flowing from the front of the roof into the groove of the tie bar. In its lower part stands extended to the wheel arches in the fenders and welded to the walls of the engine compartment. To issue water wings made drainage holes.
The upper cross member of the frame of the windshield made in the form of a chute where the arc is placed front of the tent and is fixed here with the help of spring clamps (those that fixed the hood on the car GAZ-69).
It should be noted that the incremental inclination of the windshield has a positive impact on reducing drag, though it was not so important. Much more gratifying was the fact that the counter air flow is not swirled behind the glass in the cabin-cockpit, and gently wraps around the car.
The door to the cab, coming from the car GAZ-69. To them made a frame with a window of Plexiglas. Partial window covered with plates of the same film material of the awning. Frames are inserted (and removed if necessary) through the pins in the holes of the upper edges of the doors. Regular door handles are not preserved, and in their place I installed a modern made “antique”.
The rear door is completely improvised. Through it is access to a small Luggage compartment separated from salon (as in station wagons and hatchbacks) rear seat backrest. It is made with a cylindrical recess under the spare tire, which migrated here from the engine compartment. Fixed the door on the back of the body using spring clamps. When the door was manufactured and installed, got the idea to expand its functions and make it more and folding table, and soon going to perform. For this you need only to make a small cutout in the rear bumper below the door opened to a horizontal position, but the stand under the door or a couple of guys holding her.
Wings for your car adapted from GAZ-69, only not entirely, and cutting them in half lengthwise, thus obtaining two wings of one, and then drove them to their place.
With all that the car was built as a pleasure craft, that is intended for use in warm season and in nice weather, he still needed the awning, at least in case of rain. But because the main requirement for the awning had to be easily and quickly developed and expanded, but still well-stretched — then it does not accumulate water and he did not spoil the appearance of the machine. These requirements could provide a suitable hinged frame. This mechanism was taken from an old GAZ-69 and drove him to his car at the place, shortening the strut and thrust. Cross the same arc width was a perfect fit “SIMOTA”, so that neither subtract nor add they had not. The front part (the arc) made opening offline. In the tilted position of the driver’s head and passenger side is formed an opening resembling a large hatch of the car. For the full opening of the awning it is only necessary to Unscrew the two nuts securing the front frame to the pillar. Nuts are performed in the form of a ball with a threaded axial holes, so that they can be loosen-tighten by hand. 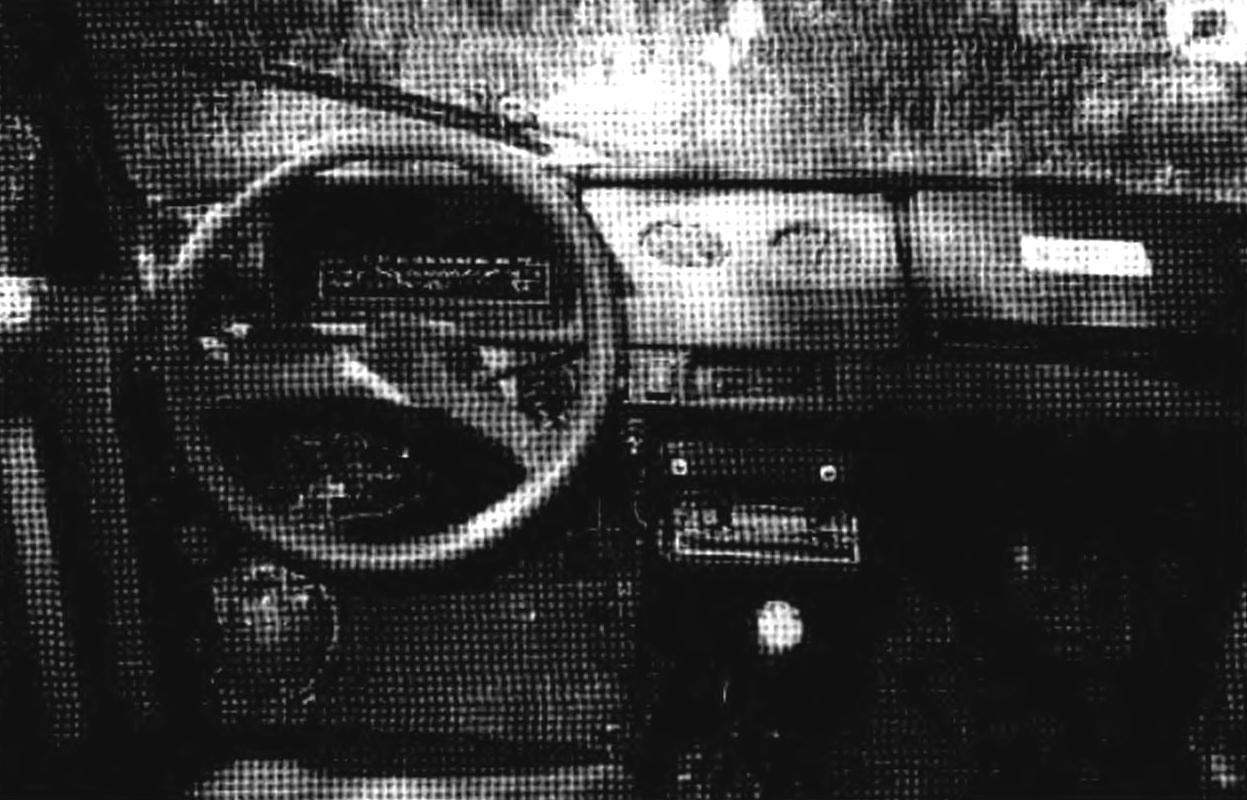 The dashboard and controls are from the car “Oka”. Retrofitting salon the next stage of design of experiments 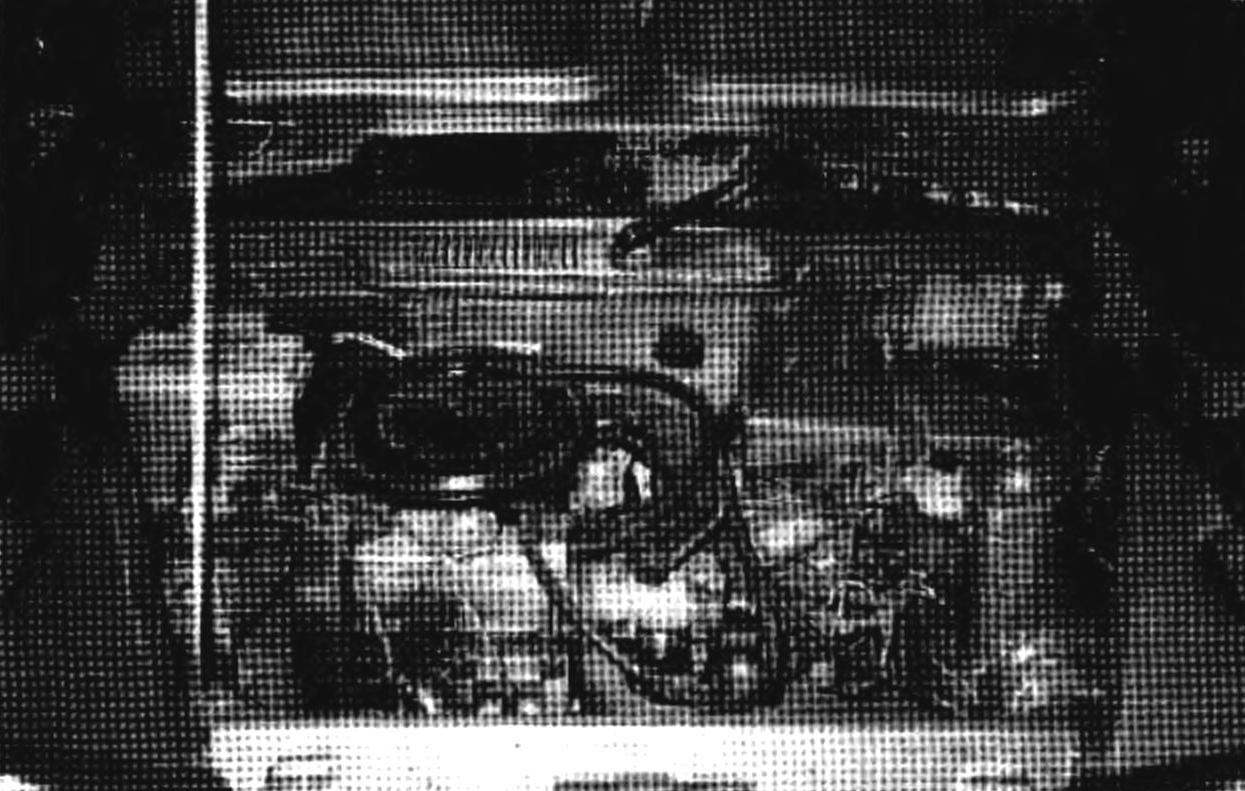 Powertrain under the hood and suspension from the car “Oka”. The spare wheel from the engine compartment moved to PA cap BA!the azhnik now and in the vacant niche, you can store a backup reserve of fuels and lubricants or tool 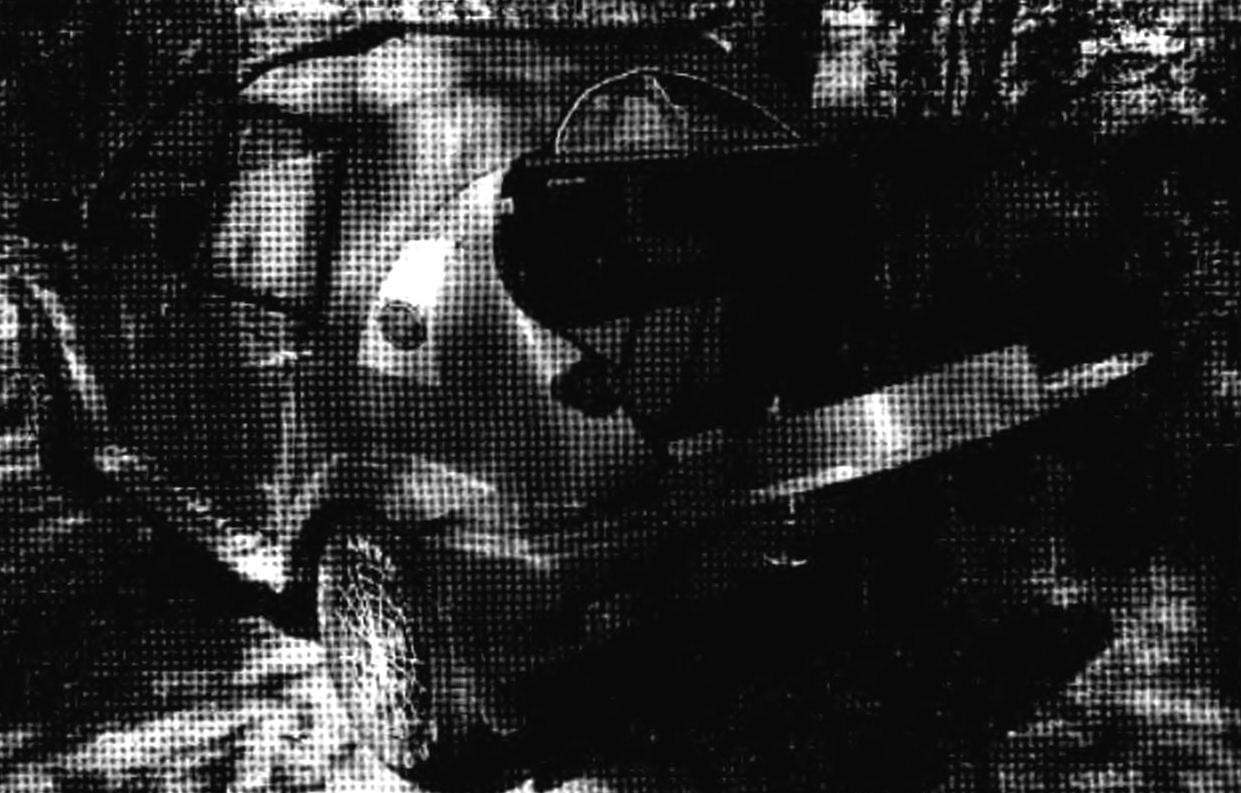 Trunk volume compared to the “okoy” has not diminished. But, the cover began to open down, and gave its advantages. Another little refinement — and the rear door can take a horizontal position, turning into a camping table
Material used the awning that covers the vans trucks. It is durable, waterproof, frost resistant. By the way, for the operation of the machine in the cold season (or winter) going to fit tent bottom cloth of wool blankets, and the heater is already there — from the car “Oka”.
Devices in external network signaling is collected from different machines. Lights — moskovichevskoe, rear signal lights from the truck GAZ-51, the indicator turns from GAS-5E, and the front “turn signal” — from “the Zhiguli”.
Klaxons — pneumatic. They purchased two (high and low tones) and two small air compressor to them. The sound signals produced from the regular buttons on the steering wheel — it includes the power to the motors of the compressors.
Interior equipment interior (front panel, all the control devices on it and wiring) — from the car “Oka”. From him and control mechanisms: pedals throttle, brake, clutch, shift lever.
Retrofitting salon the next stage of design of experiments.
O. STARIKOV, p. Ostrovtsy, Moskovskaya obl.