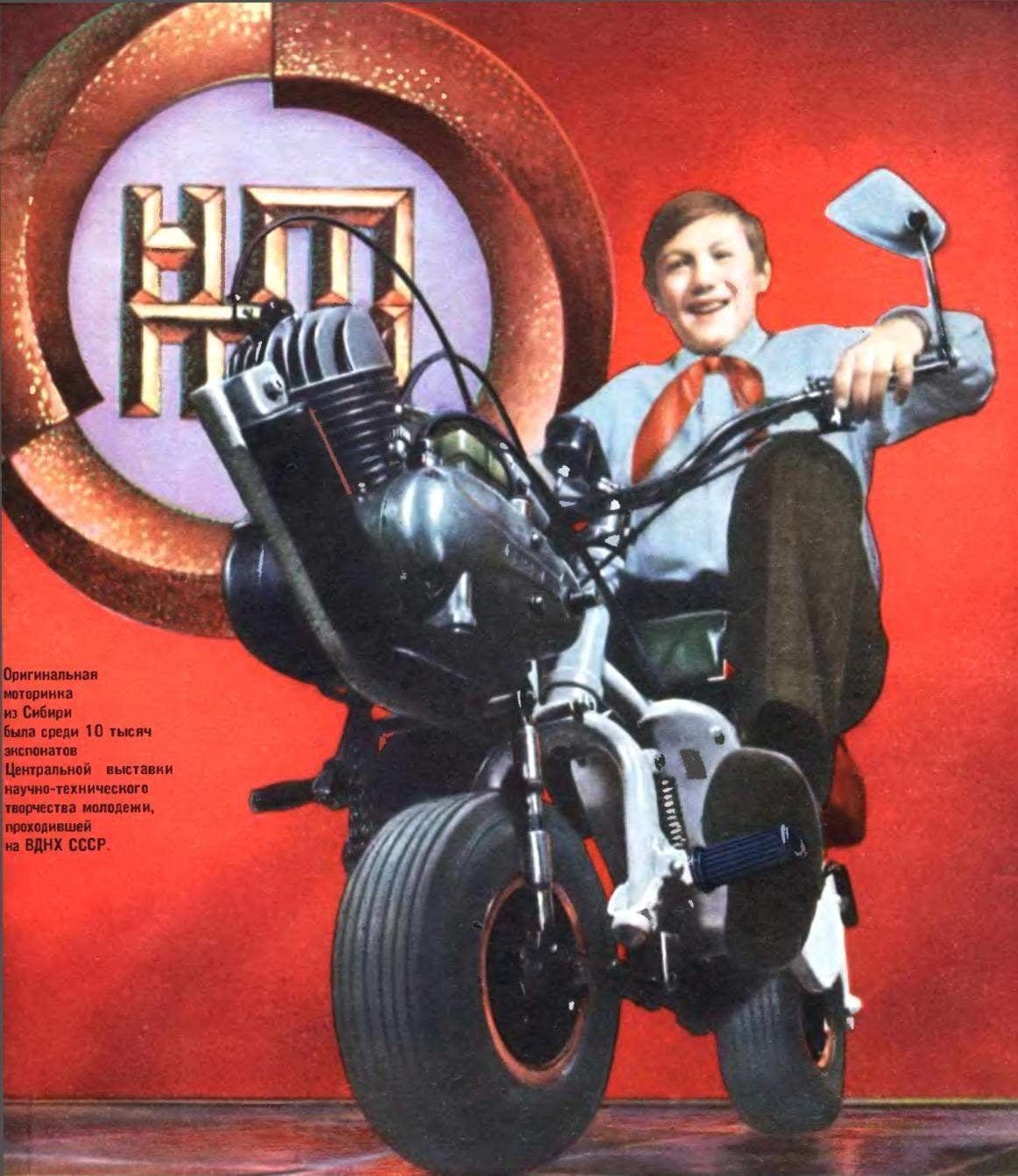 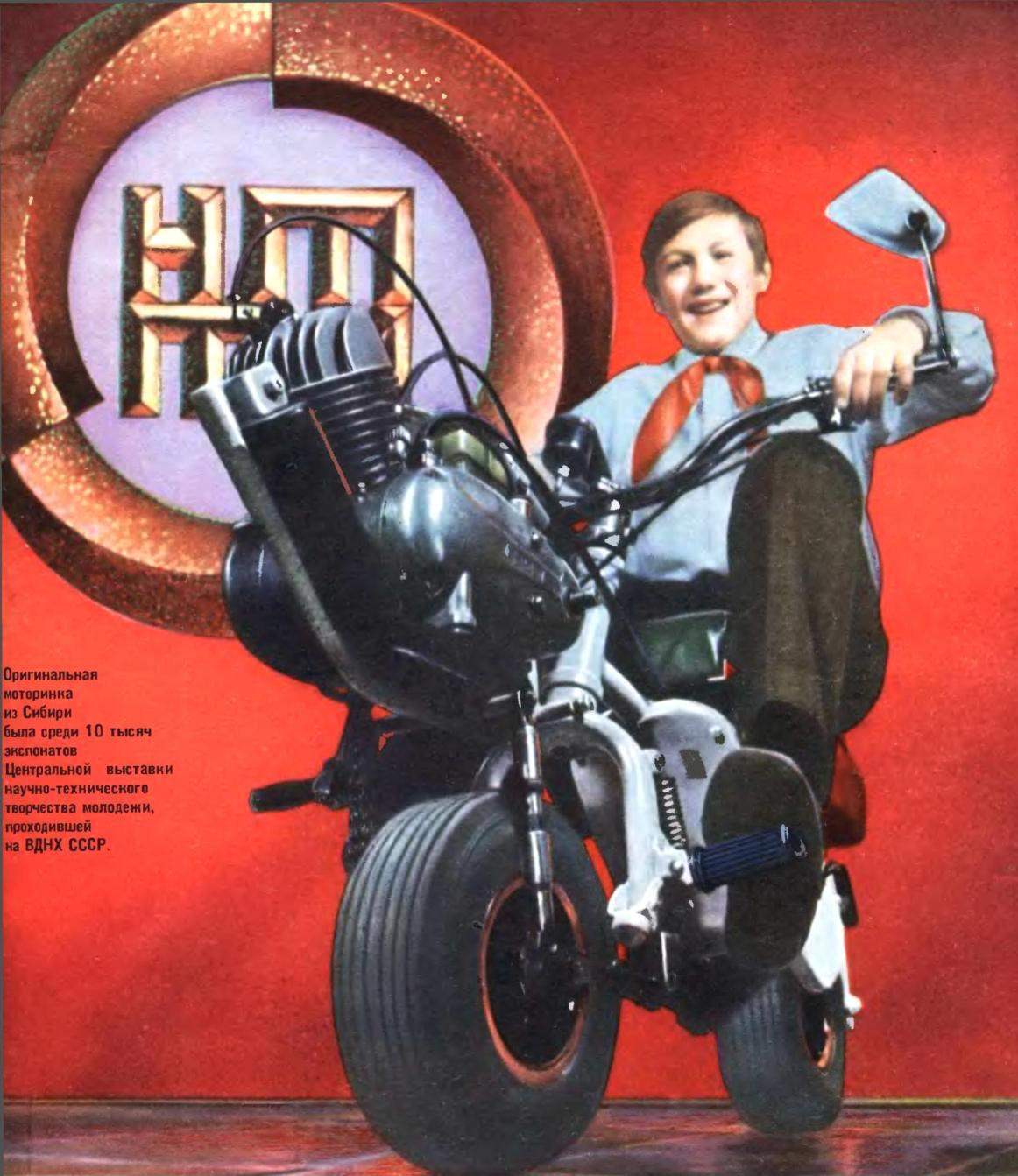 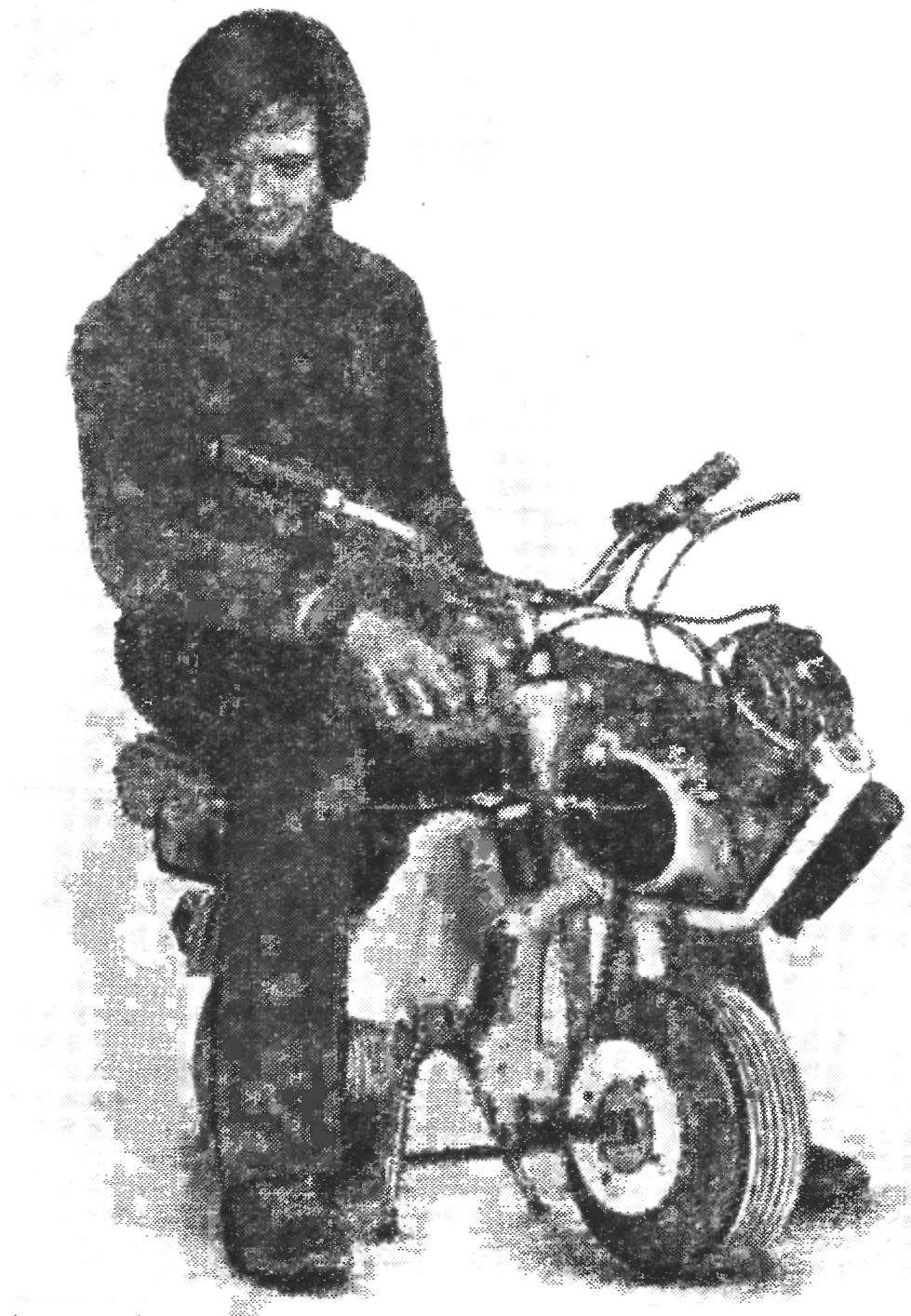 “It is easier to pull than push” — the ancients said. Indeed, what if leading and control functions to combine in one wheel and make it no pushing and pulling! In the classical scheme of two-wheeled vehicles (motorcycles, mopeds, scooters, etc.) the rear wheel is usually the leading, front of the same control.
The rear wheel pushes the car forward. The vector of the propulsive force pushing the rear wheel often does not coincide with the direction of the front wheel. When driving on slippery road (ice, dirt) traction drive wheel with the ground is much less than the force of rolling resistance of the front wheel. For these and other reasons, there are drifts of two-wheeled machines and the almost inevitable fall.
To test this idea in the laboratory design of small technology Club for young technicians Novosibirsk Akademgorodok, an eighth-grader Anatoly Khachilaev has developed and manufactured a two-wheeled micromatic front sprocket — dbutil.
By this time, the lab has accumulated a large experience in building front-wheel drive cars {microtracker, little micro-car, a series of tricycles). When creating dwolla used some components and parts, the same applied to the tricycle “Grasshopper” (see “M-K” № 6, 1974).
Dutil consists of a frame, the front and rear wheels, front forks, engine, steering, seats and fuel tanks.
The frame is box-shaped rear part of the frame written off motorcycle To the-58. In its lower eyelet is inserted and rigidly fixed axle rear wheels.
The outside frame is covered with removable panels, forming the trunk, accessing it through laid back seat. Front fork of the scooter T-200 rotates in two thrust bearings in the tube of the steering column welded to the horizontal tube of the frame.
Ka fork with a bracket mounted engine, sh-52. Bracket made of pipe Ø 22 mm in the form of an arc, grasp the motor from the bottom. It has lugs, where the lugs are inserted into the crankcase and the cylinder rotated on 180°. The rear end of the bracket is hinged to the steering column and front fork, and the front end via two split thrust rests on the axle of the front wheel.
Curved bracket for engine mounting, the vertical part of the fork, and pull the lower swinging arm front fork to form a hinge chetyrehdverny. With this engine varies with the wheel. Stabilization the latest, by turning the clamping screws M16. For them to cut the vertical tie rods in the middle of the corresponding welded nuts on the right and left-hand thread.
On top of the steering column is attached a large and comfortable steering wheel from a motorcycle “Rising”. Mounting parts taken from a cargo scooter T-200. Ka steering wheel mounted controls, bi-cycle: right — throttle left — the gear shift lever in combination with the clutch lever, the lever decompressor (from the moped “Riga-1”), the ignition switch, and horn button. In the middle of the plate on the bracket installed the speedometer, the current from the transmission. Here, fixed the rear view mirror. The steering wheel has the limiter turns to have three stops, two of which are welded to the tube of the steering column in the middle to plug.
At the bottom on both sides of the front fork at the level of the front wheel axle is welded folding foot pegs. For greater stability of dwolla in the Parking lot are mounted W-shaped footrest, reclining back. 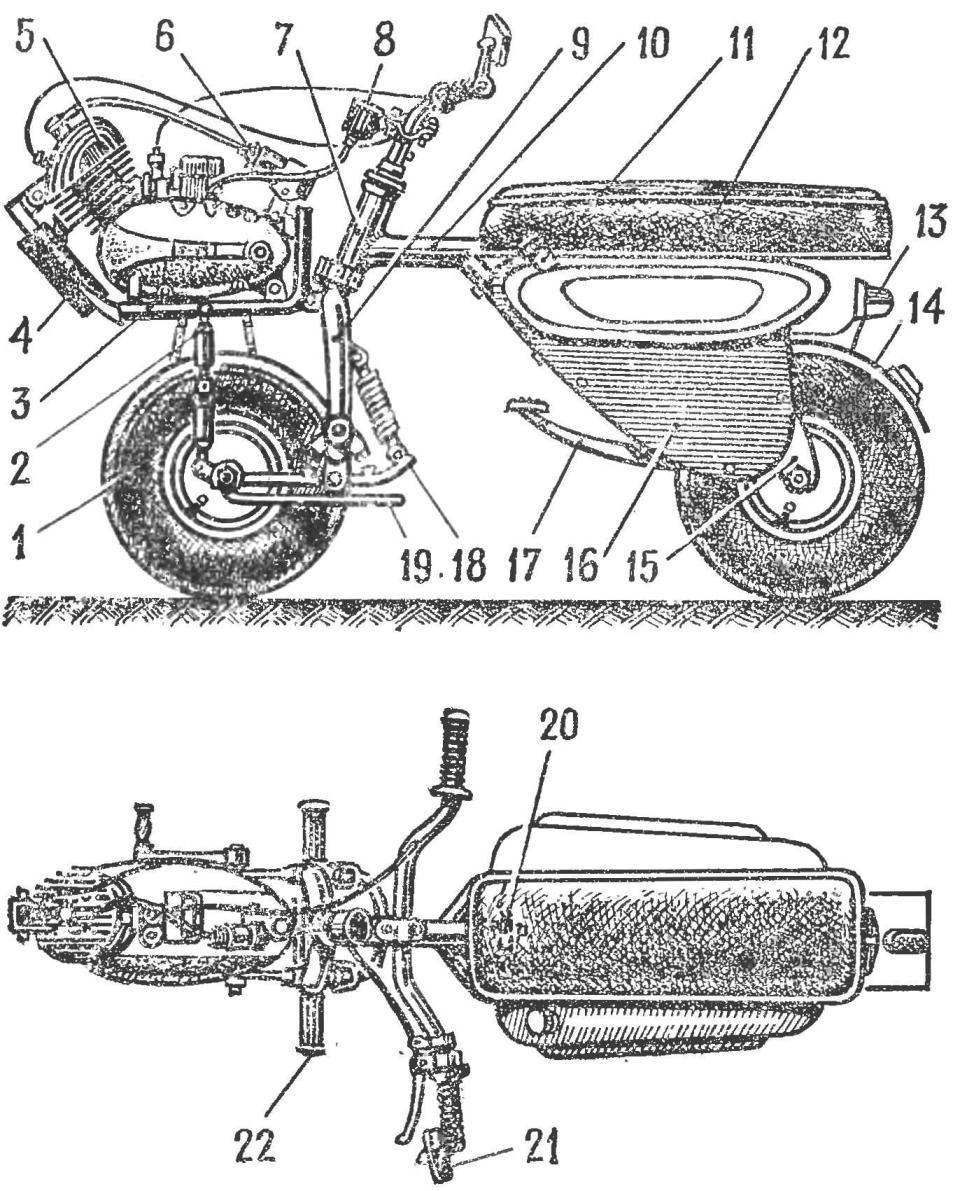 Fig. 1. Dvutil — side view and top view:
1 — front wheel 2 and regulating screw coupler. 3 — bracket-engine, 4 — damper, 5 — engine, sh-52, 6 — reel, 7 — tube steering column, 8 — speedometer, 9 front fork (scooter “Tula 200”), 10 — frame, 11 — neck of the gas tank, a 12 — seat divan type, 13 — brake light, 14 rear panel, 15 — rear plug, 16 — side panel frame, 17 brake pedal 18 — pendulum suspension of the front wheel, 19 — frame stand, 20 — pump, 21 — mirror 22 — foot pegs.
Engine redone in the following way: in the right crankcase cover propylene hole to pass the chain down. Starter pedal on the right. Muffler from the D5 engine, its exhaust pipe shortened. The exhaust gases at an angle of 90° to the side and down. Good compact muffler dampens noise, and the engine develops normal power.
Wheels Ø 290 mm (3.5 X 5″) on the map. Their discs are made by extrusion on a lathe. The front wheel hub machined at the same time with asterisk. The shape and size it the same as the tricycle “Grasshopper”. The number of sprocket teeth 7 — 36.
Drum brakes operate only on the rear wheel from the pedal on the right. Hub rear wheel, brake drum and back plate with pads — motorbike. Front wheel closed flat mud flap (photo removed), fixed between the feathers of the front fork, the rear — guard in the shape of the wheel. It’s equipped with a stop lamp and a reflector.
Folding seat made of foam rubber and is upholstered with artificial leather.
The tank consists of two halves located on each side of the frame just below the seat. The bottom half of the tank is connected by a tube. Since the tank is below the carburetor for feeding gasoline in the float chamber applied to the diaphragm pump from the boat motor “Whirlwind”. It is placed under the seat and operates from the vacuum produced in the crank chamber.
When testing dutil fully met our expectations. It is easy in management, maneuverable, stable on the turns, easily overcomes obstacles. At rectilinear motion on a slippery road, the drifts do not exist, stability is good.
Technical characteristic:
Dimensions, mm:
length……………………………………..1180
width at steering wheel………………………700
height at steering wheel……………………….800
Base, mm…………………………………640
Weight…………………………………….28
Maximum speed, km/h…..up to 40
V. TAMBOVTSEV