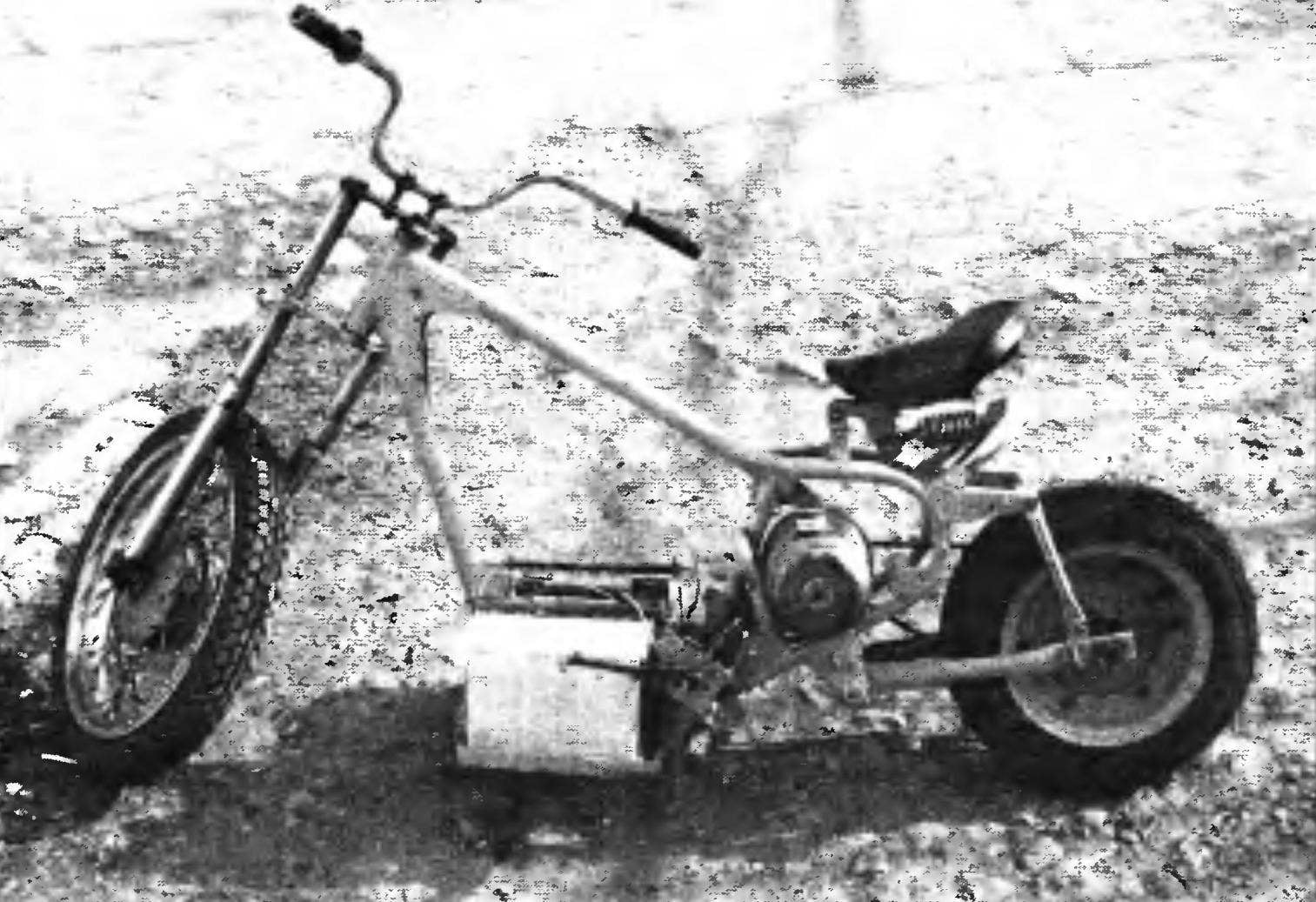 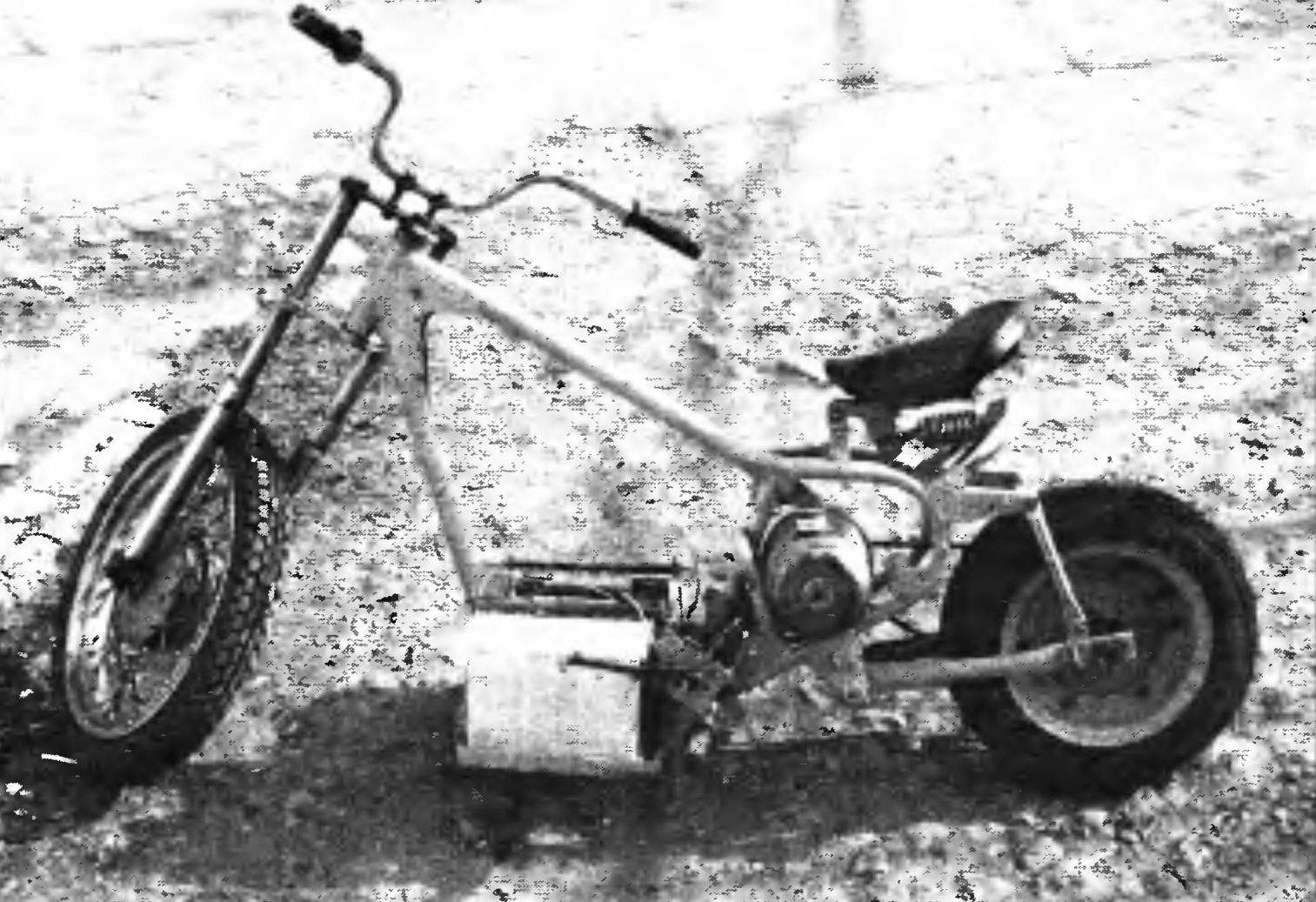 Ecology and environmental protection are becoming increasingly relevant topics in the world. Constantly more stringent requirements for emissions of harmful substances by vehicles. Therefore, the major manufacturers are developing and start producing electric and hybrid cars. To reach these developments and to our country.
And if the evolutionary direction of development of the automotive industry are defined and dealt with by the professionals in the category miscellaneous vehicles — nepahannoe field for research, analysis and creation of new types of equipment for active leisure, household chores, initial training, etc.
For the latter of the listed goals and design Association center of children’s (youthful) technical creativity of the city of Beloretsk in Bashkortostan Republic took the decision to construct environmentally friendly, simple, reliable and safe in-vehicle operation. The General view was that such was to be electrocycle.
As the power unit chose an electric motor with bonded magnets from scrapped computers, he drew our attention to the workmanship and high efficiency (when working is almost not heated).
The supply voltage was determined to be the motor at 24 volt, it is absolutely safe for humans. Was provided by two car batteries with a capacity of 50 a·h. Before installing electricl battery was Packed in a plastic bag.
Motor control is carried out from the controller to a neutral position in which the brake lever moves automatically, once stops the control action on it. The brake system of the motorcycle “Voskhod”. 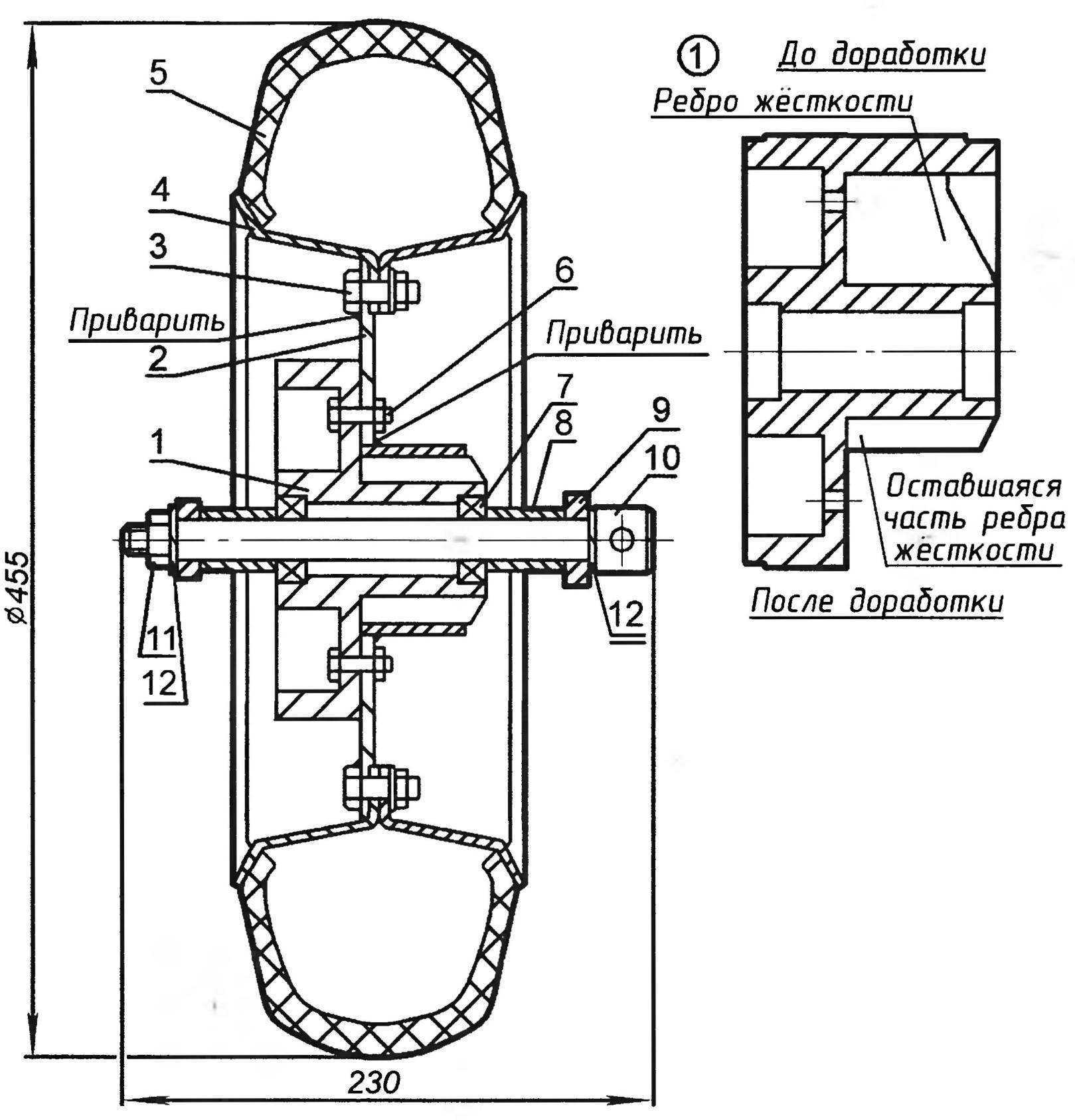 The rear driving wheel of electrocycle:
1 — the hub (of the scooter Tulitsa); 2—the drive wheels (scooter Tulitsa, modified); 3 — a bolt of fastening of a wheel rim to the disk (full-time); 4 — rim of the wheel (composite); 5 — rail; 6 — bolt disc wheel to the hub (regular); 7—bearing (standard, 2 pieces); 8—distance sleeve (2 pieces); 9—fork of the rear wheel; 10—the axle (motorcycle MMVZ-125); 11—nut axis; 12—spring washer (2 PCs)
In my design I wanted to do a single-stage transmission to drive wheel: to make easier and higher efficiency, and plenty small. In order to meet tegevusaasta settings, mounted on shaft of electric motor sprocket z=11, and the driving wheel sprocket z=59.
Driving wheel, used a small diameter — 4×10″ (tires and wheels taken from a scooter Tulitsa).
Using a tachometer measured the idle of the motor, and for a given transmission gear and the diameter of the tyre calculated the speed of electrocycle — 16 km/h under 24 volts. These parameters have quite satisfied to decide on the transmission. Once you have the basic parameters passed to the solution of layout tasks.
The basis of electrocycle was written off from the frame of the motorcycle “Voskhod”, freed from all superfluous. However, the units it does not compose, as I wanted to install the battery and the electric motor so as to obtain the lowest possible center of gravity. Frame remake was undesirable — it would require the frame (when welding warped product).
And yet, there is a simple (one might say, even beautiful) option of increasing the base electrocycle lock — on fork rear wheel moved back and secured in the eyelets of rear foot pegs. And two detachable battery box made out of 25×25 area, placed in front of the foot pegs, right and left of the main frame tubes and up to 50 mm below it.
The motor placed in the rear of the frame, under the driver’s seat, allowing to use very short drive chain, and its tension is made small by moving the axis of the rear wheels in the grooves of the plug.
Brackets engine mounts welded in place. And this temporarily fixed on the frame rear wheel and a motor with sprocket and threw the sprocket chain so that between their axes was skewed.
Seat used from a motorcycle “Ural”, front fork and front wheel of the motorcycle “Minsk”.
Major works required modification of the rear drive wheel. The hub used from the rear wheel of the motorcycle “Voskhod”. She was released from the spokes and bored through on a lathe to obtain a seat for the installation of the centering sleeve to the wheel rim, connected by welding.
For wheel rim edge of the wheel is a centering groove. After Assembly of the wheel head bolts securing the rim is welded to the wheel disc.
A circuit diagram is borrowed from Bulgarian of the electric vehicle. The difference is that instead of the diode made contact, which allows you to switch the voltage supplied to the motor with 24 volts to 12 or Vice versa.
Starting and initial acceleration is carried out at a lower voltage when closed contacts K2 and KZ. Low voltage is also used for energy recuperation during braking and driving on slopes. At the steady state movement of the contact K2 and KZ are open and closed contact K1 — thus the motor is fed full voltage.
For the first time in our drafting and design Association is in operation, electrotek, so it was interesting in practice to define the parameters of their current consumption and its motor in regen mode. Measurements were carried out by the ammeter AP — 110 (GOST 1700-66) with “0” in the center of the scale.
It was found that the highest inrush current occurs when starting off: At 24 V — 30 a And 12 V up to 15 A. At steady state, the current consumption is 10 A at 12 V and 15 A — with 24 V. However, we were puzzled by the fact that the motion on 8% rise power current consumption was 20 — 22 And at 24V, and the same descent in the recovery mode charge current battery was only 20A at 12V. Electrocycle moved with a slight slowdown. 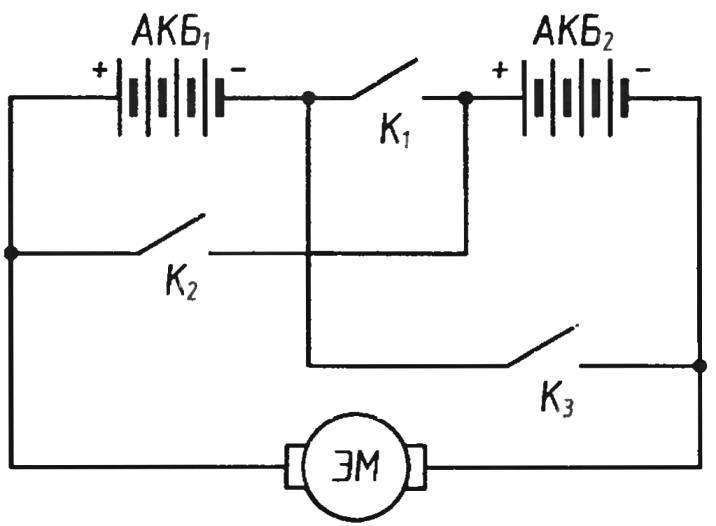 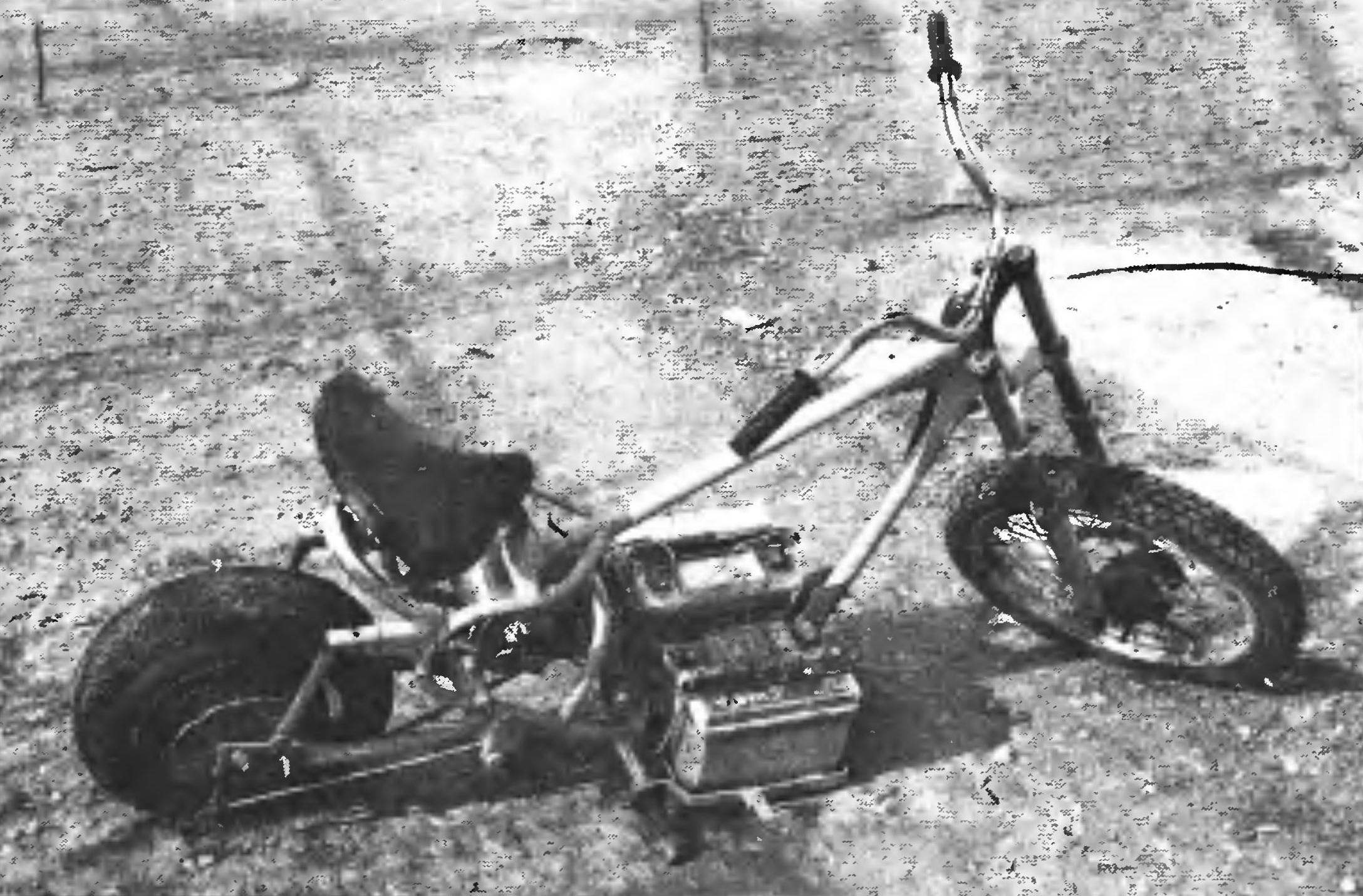 Electrocycle ready for action
The explanation for such a significant loss of power (about 50% with such an economical engine) can be explained by the unaccounted large expenditure of electrical energy in the transmission, rolling resistance of the wheels, and the inefficient regime of operation of the engine at low speeds.
Seems to be very attractive to install in the same battery boxes a couple of batteries for 24V trucks, which would be enough for 1.5 — 2 hours drive in a sharp improvement in ride quality of the car, if this would not change the mass, center of gravity, and hence the handling… But it is our further creative task.
It is especially important to note that the children acquired the basics of design and labor skills, the experience of creating a new one. Modernizarea and improved. During this academic year we made the frame dismountable flanged joints, which allowed to carry electrocycle in the trunk of the car. Made more rigid front fork.
The main advantage of vehicles with electric drive, especially for initial training, — continuous the car ready for action. Sit down, push with the left foot on the lever of the controller — and went And at the same time — mind you — almost silently and without polluting the environment.
A. SPEAR, Beloretsk, Bashkortostan