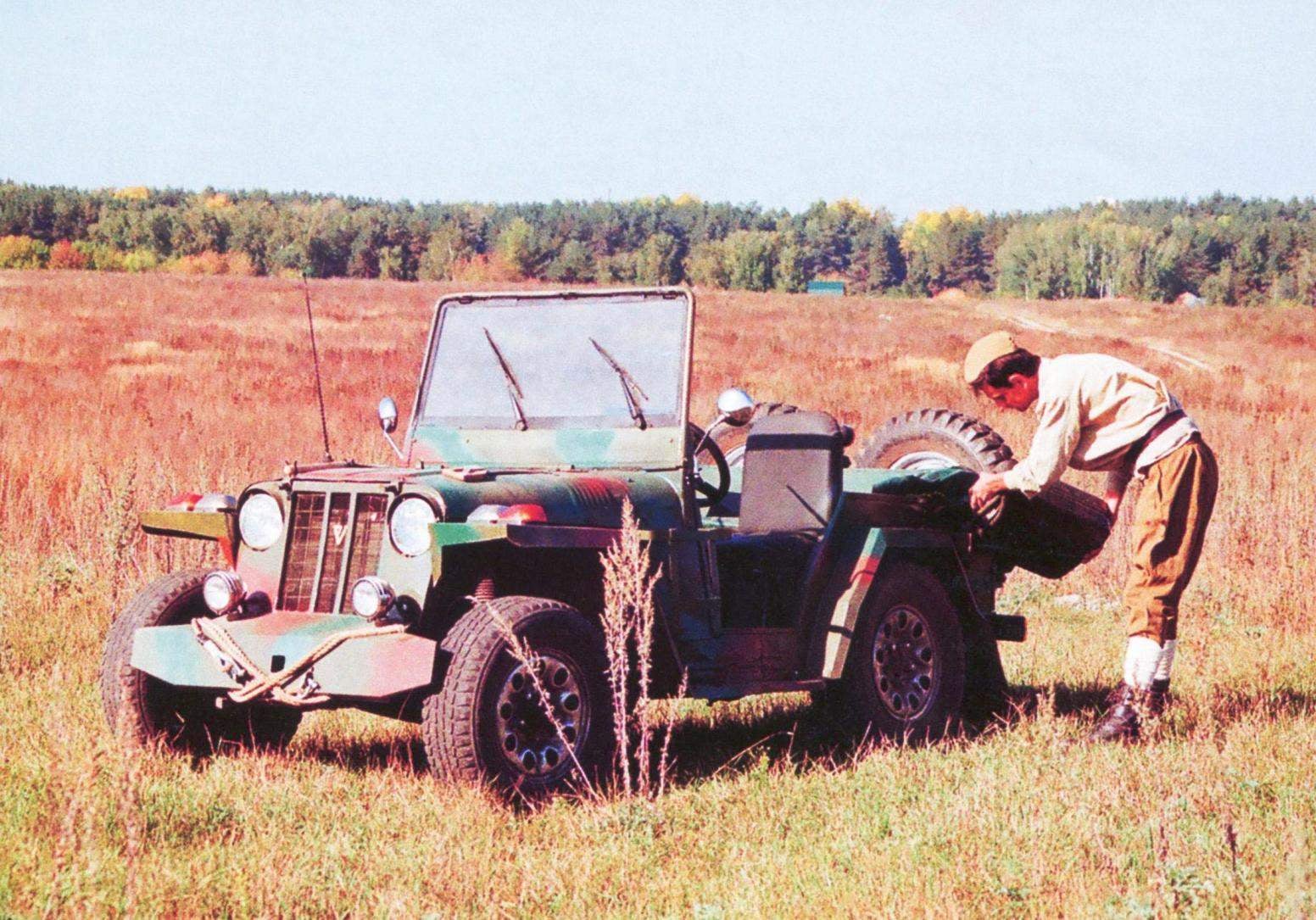 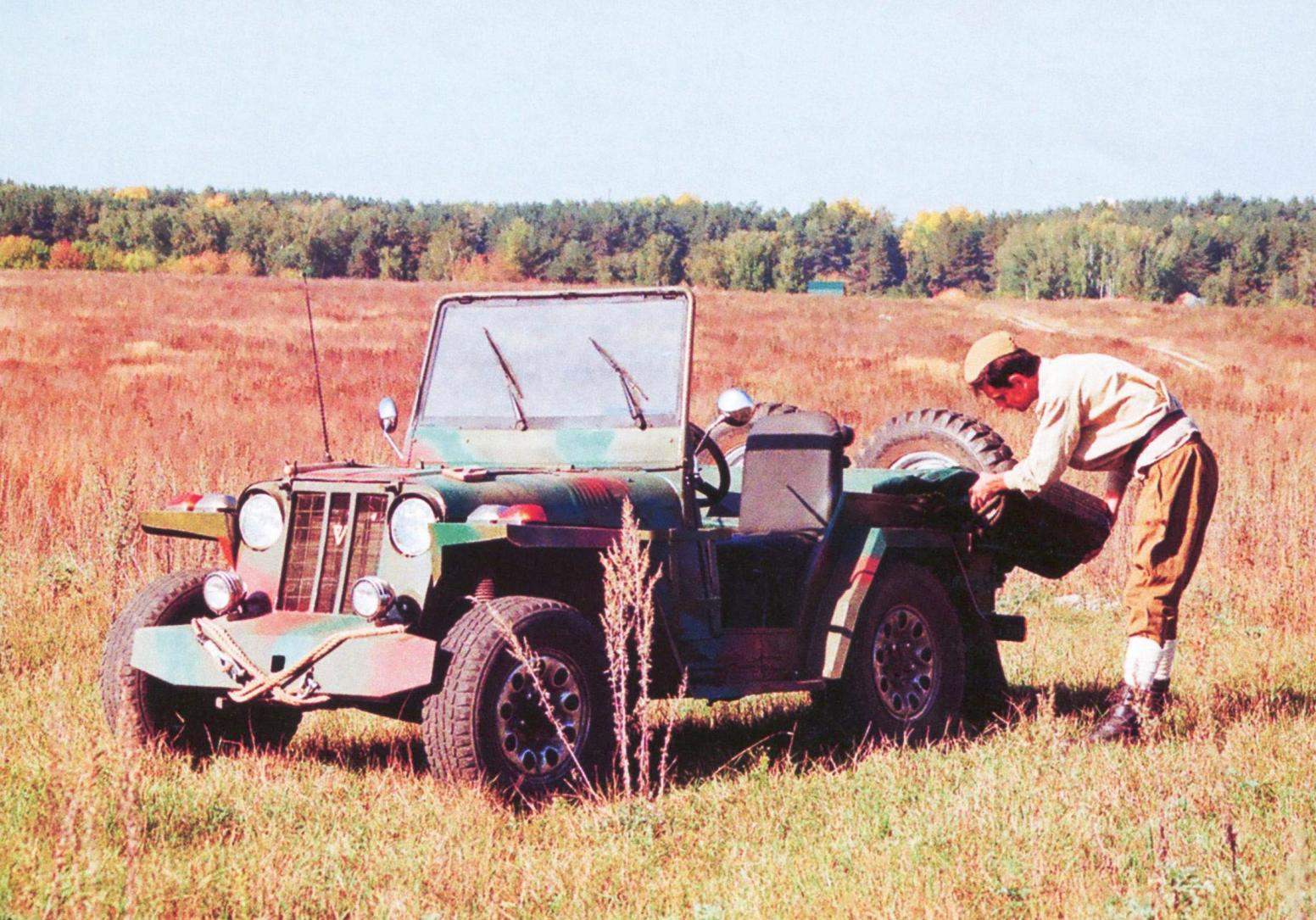 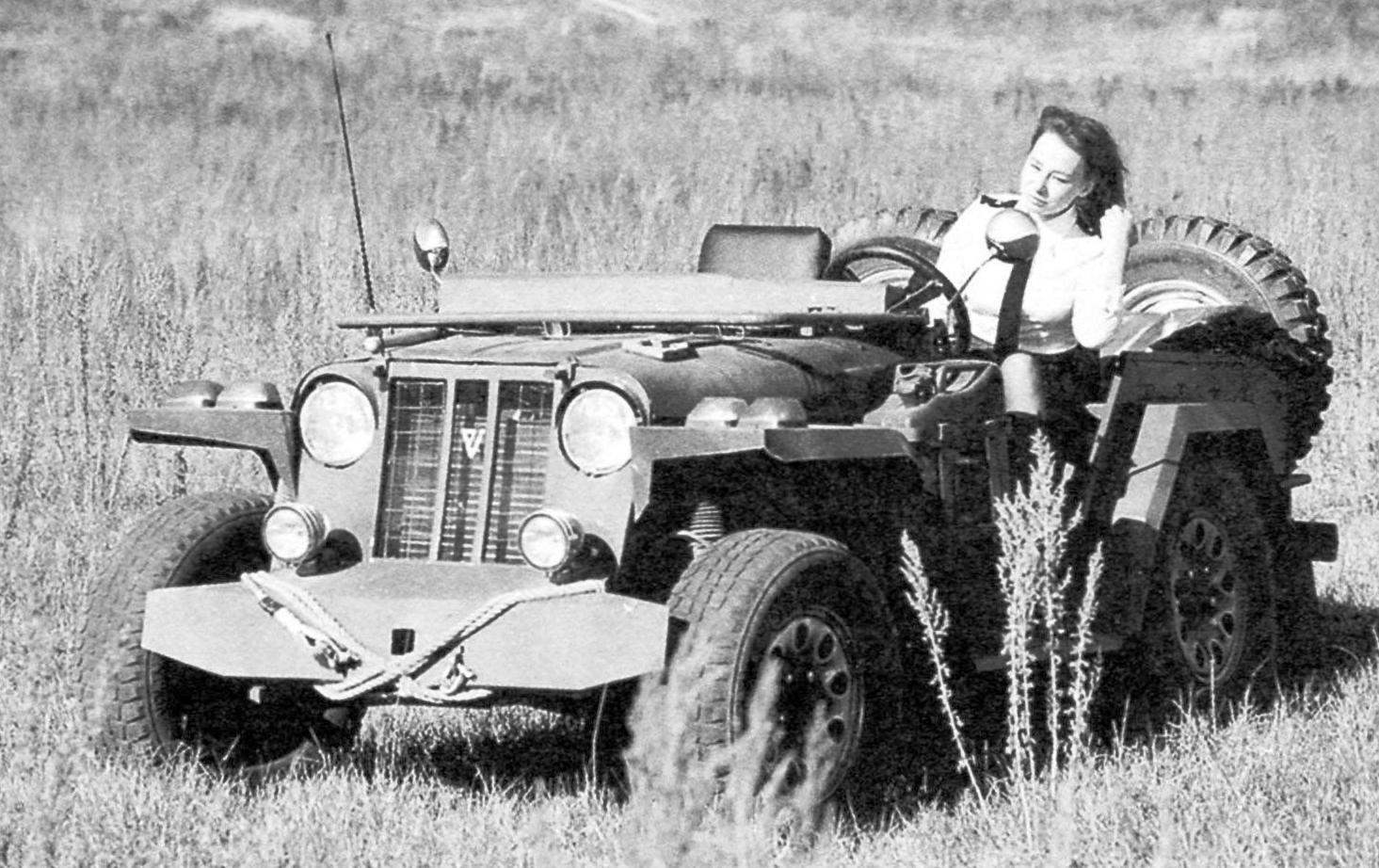 Long ago, in the mid-1980s, when the Moscow plant “Salyut” there was a club of sports-technical creativity. It was in the club three vintage car: ZIS-5, GAZ-MM (“lorry”), the GAZ-67B. With the beginning of perestroika and the General collapse of the country club was closed, the premises and the garage was given to other needs, and the vehicles concerned members of the club parked where it is possible, just not rotted under the open sky in the backyard… Well, the GAZ-67 came to the cottage of our family. Since the machine was without documents and numbers, to legally use it. And she stood there for ten years, until the “good people” didn’t catch her exploded and the metal. I was young then, to the world of technology just joined and did not understand the historical value of this machine.

Later apparently earned a “guilt complex” before the old man the jeep…
And since then really wanted to have a machine like this. But as of now to purchase a vintage car is really a lot of money, and preserved them quite a bit, until the dream so the dream remained.
Years passed, I got older. Started to work in the automotive field, gain experience and skills working with metal and one day I realized – if it is impossible to buy a ready-made vintage car, you have to create it yourself! And let it not be, strictly speaking, a true rarity, but “replica” is also quite make up for the dream. So decided to do avtostroiteley. Well, working in the automotive field, selection of spare parts and Assembly of the whole structure together was only a matter of time and effort…
Now a little about how and how long took the process of construction. I built the car in the workplace, in your free time. However, with a break for two years when changing jobs had to move half-assembled car in his garage, where he just kept until he had a chance to continue its construction in the garage at the new place of work. In the garage it was not possible to engage in the project due to his remoteness from the place of residence. Therefore, the total time spent on the creation of the car is somewhere around four years…

The Car Is A Pygmy 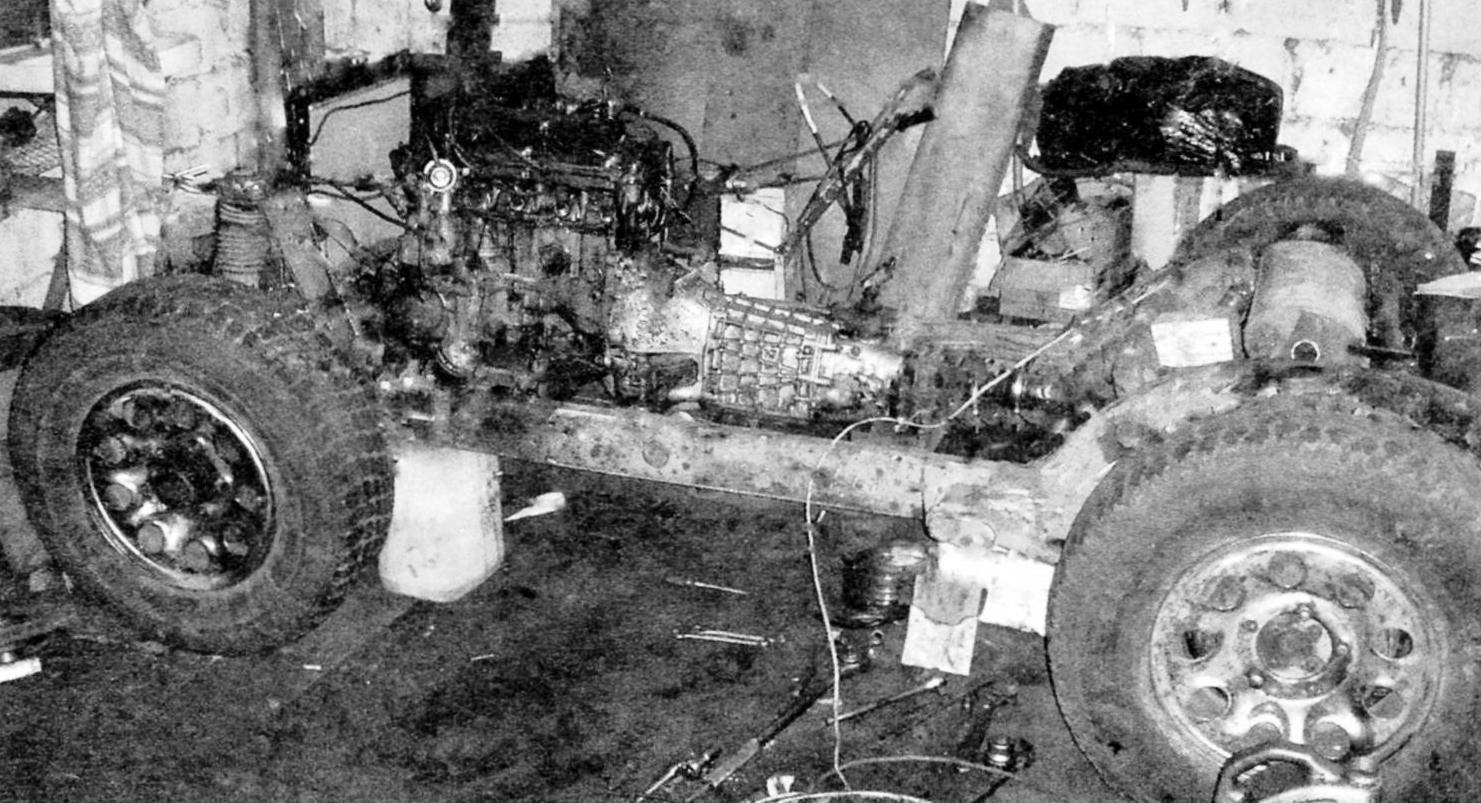 The layout on the frame of the power unit, suspension, gas tank and other components and assemblies 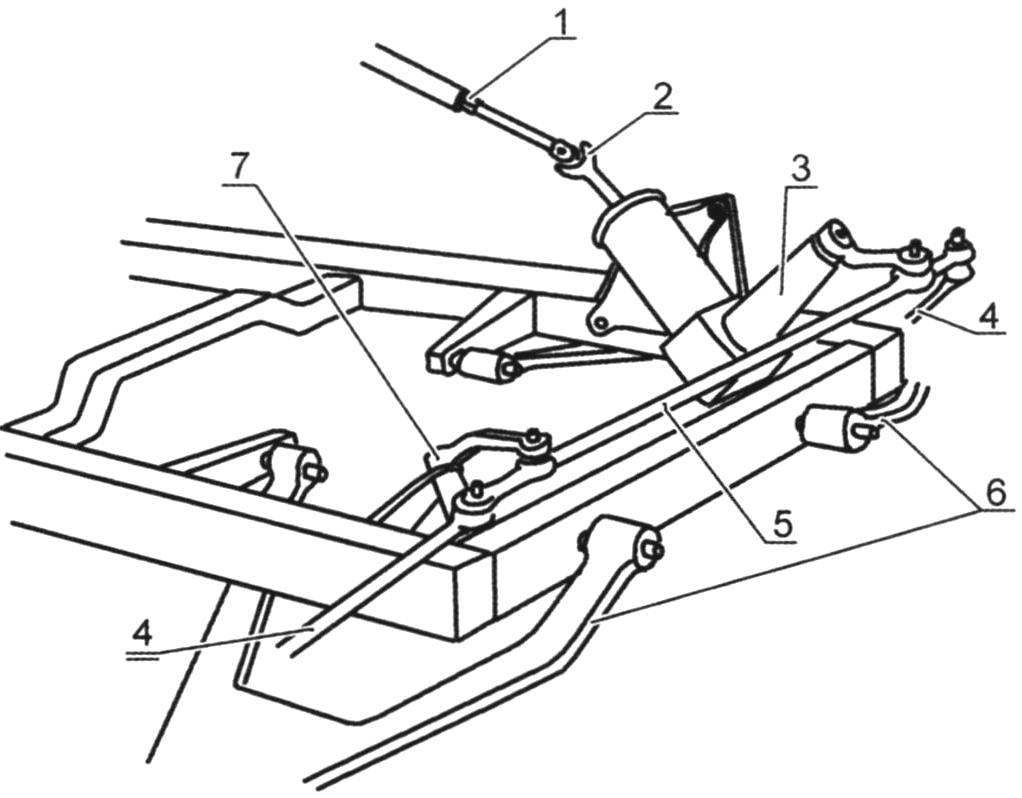 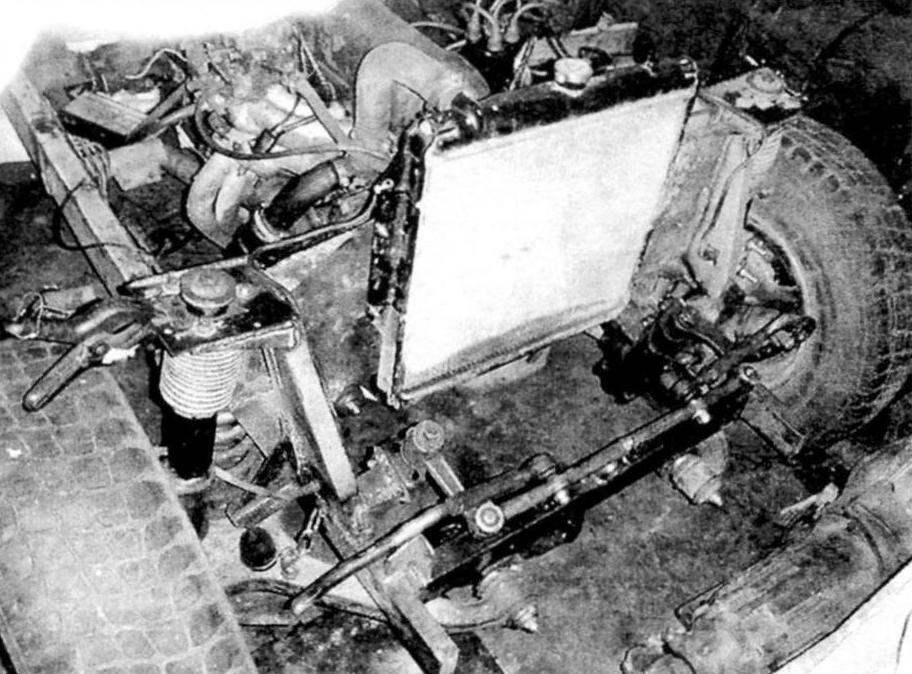 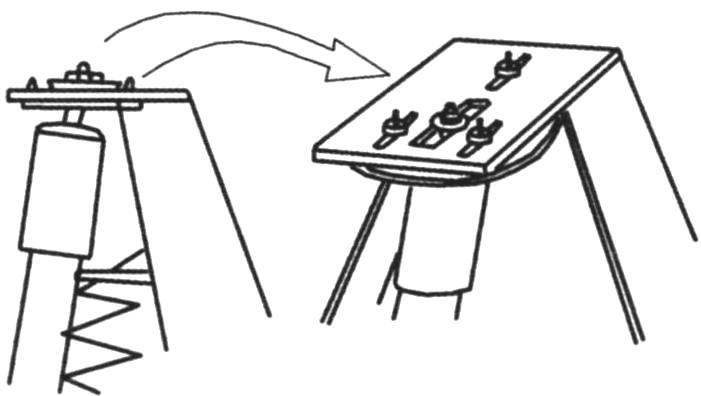 Adjusting the camber angle of the wheels (the right front)
The idea is to make the car their own hands, as I noted earlier, ripe not because of the need to have a “wheel” (I have a car Assembly plant), but from a desire to construct something of their own. Had not originally planned that my car would have to compete with the factory cars in the specifications, but simply it could be an expression of my design views, thoughts and “vision of the subject”…
Since I have a passion for vintage cars, especially in the military, then the appearance was determined in some sort of “Villis” and GAZ-67. For public roads it’s not meant already in the design – very difficult to register a homemade car in the traffic police. His path was defined as country-beach, for use on the primers and the outings in the woods… Based on this concept I started to work. And yet, the cost of implementation of this project was to cost in the minimum possible amount, so the items were supposed to pick up on the dumps, disassembly, etc… Even to the detriment of the resource. I must say that this condition has been met – the total amount of money spent was somewhere in the region of 15 000 rubles. 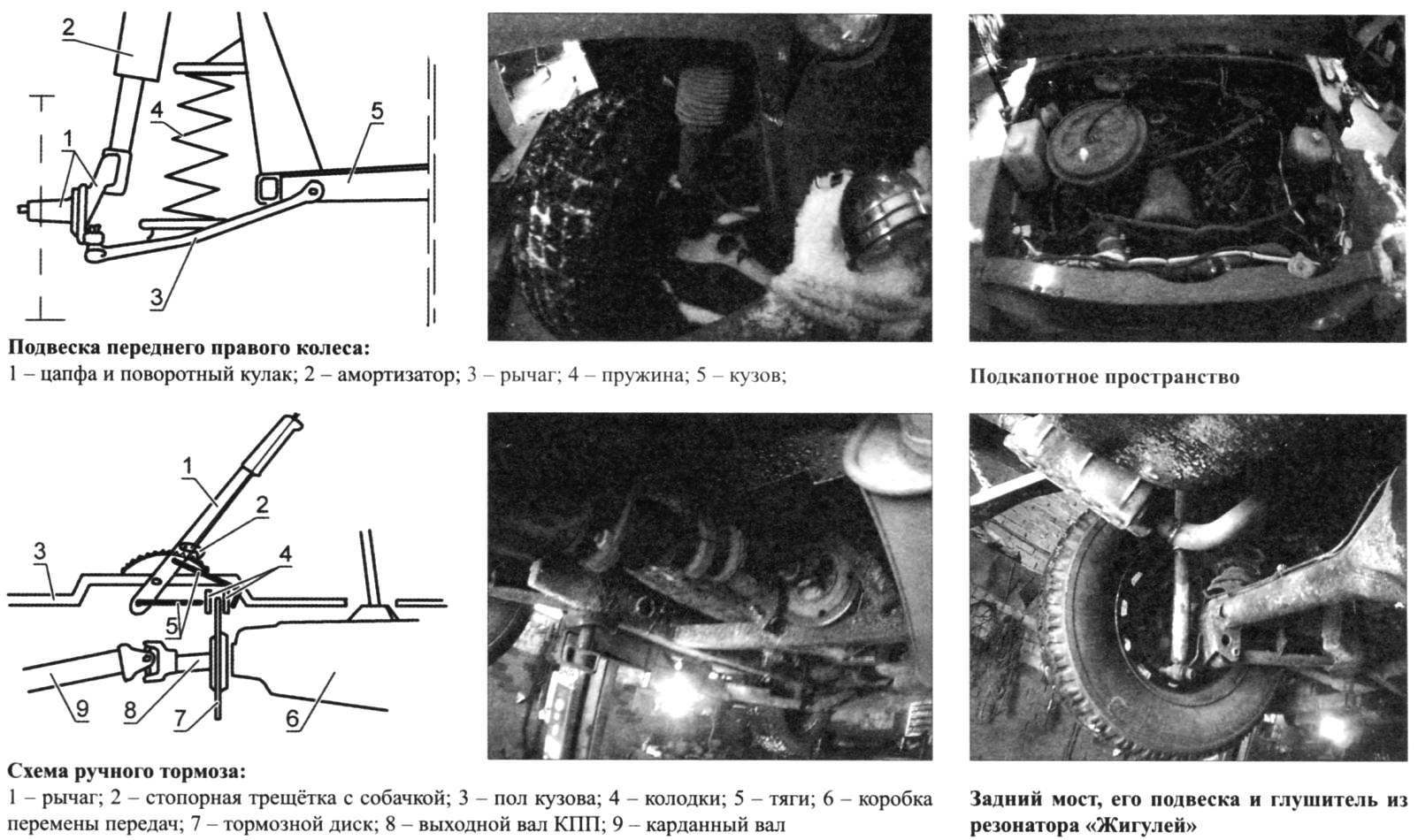 Now directly about the car: rear-wheel drive car (construction all-wheel drive option was removed from the agenda almost immediately, in connection with the complexity of design and overall useless). The engine and gear shift Assembly are taken from the old VAZ-2101. The rear part of the frame, with axle, went from “Suzuki Grand Vitara”. The front part is welded from rectangular tube profile cross-section 60×40 80×60 mm and with a wall thickness of 2.5 mm. the Front suspension – like McPherson. Stand together with hubs and lower arms – from the car “Suzuki Vitara”, springs from the VAZ-2121. Steering gear from “Suzuki-Sidekick”. But because of the design features my car had to turn 180° vertically. From the same model, taken steering the pendulum. Rods – homemade, cooked from parts of rods of different brands of cars under the necessary configuration. Brake system – hydraulic, two-planimetric. Brake master cylinder and vacuum booster from “Suzuki Vitara”. The handbrake is self-production. Electrical system – 12-volt, ground, similar to VAZ. In the exhaust system used two banks of resonators from “Chevrolet-Niva”. Originally, there was one resonator and muffler of the standard Bank from the VAZ-2121, but due to the location of the muffler on a-arm rear suspension on big bumps he took the blows from the bridge and it was decided to replace it and to put less volume on the size of the resonator to the Bank… by the Way, the exhaust sound has become more “interesting”.
To construct the body used steel sheet with thickness of 1 and 1.5 mm, cut with a angle grinder, bent, and welded on the planes without the use of complex shapes, rods tools, etc. Windshield (laminated glass to order, leans on the hood). 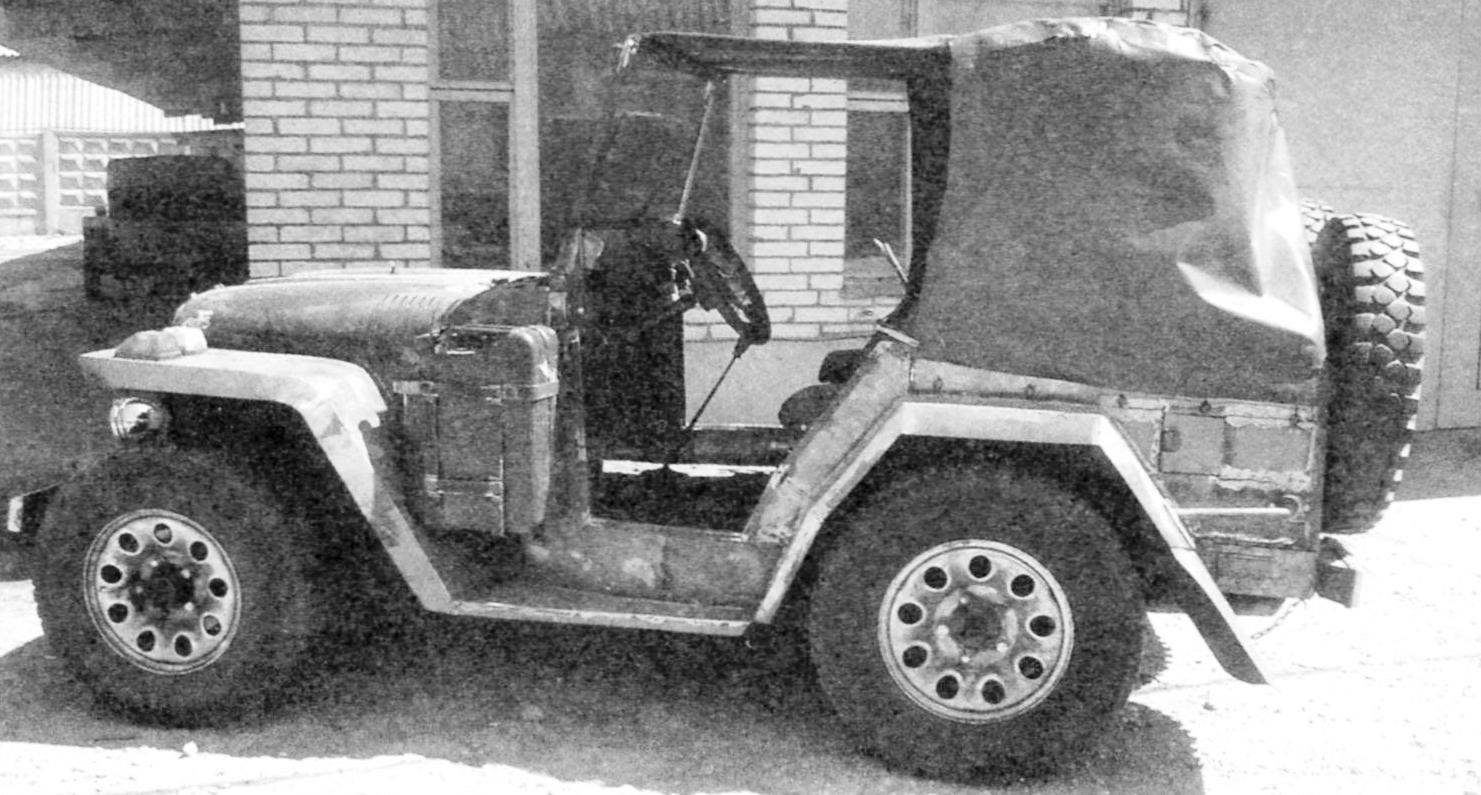 The car is a Pygmy with a raised canopy
Total weight was 970 kg wheel size is 235x75x15. Ground clearance (clearance) in the bottom under the rear axle – 200 mm additional equipment – folding awning, stove from the VAZ-2106 receiver. Dashboard – a combination of the respective nodes of the VAZ-2101, VAZ, GAZ-69. “Reserve” in the amount of 2 pieces on the back of the body. Originally intended one spare wheel placed on the right wing (on the left – chest for tools), but due to lack of load wheels, it was decided to increase the number of spare wheels to two and moved the mounts back. Lights: optics – staff from the VAZ-2101 with a built-in xenon. Dimensions and turn signals from “Gelend of Vagen”, additional fog lights.
In the future, they plan to introduce differential with mikolasko lock for excellent flotation off-road.
I. PRONIN