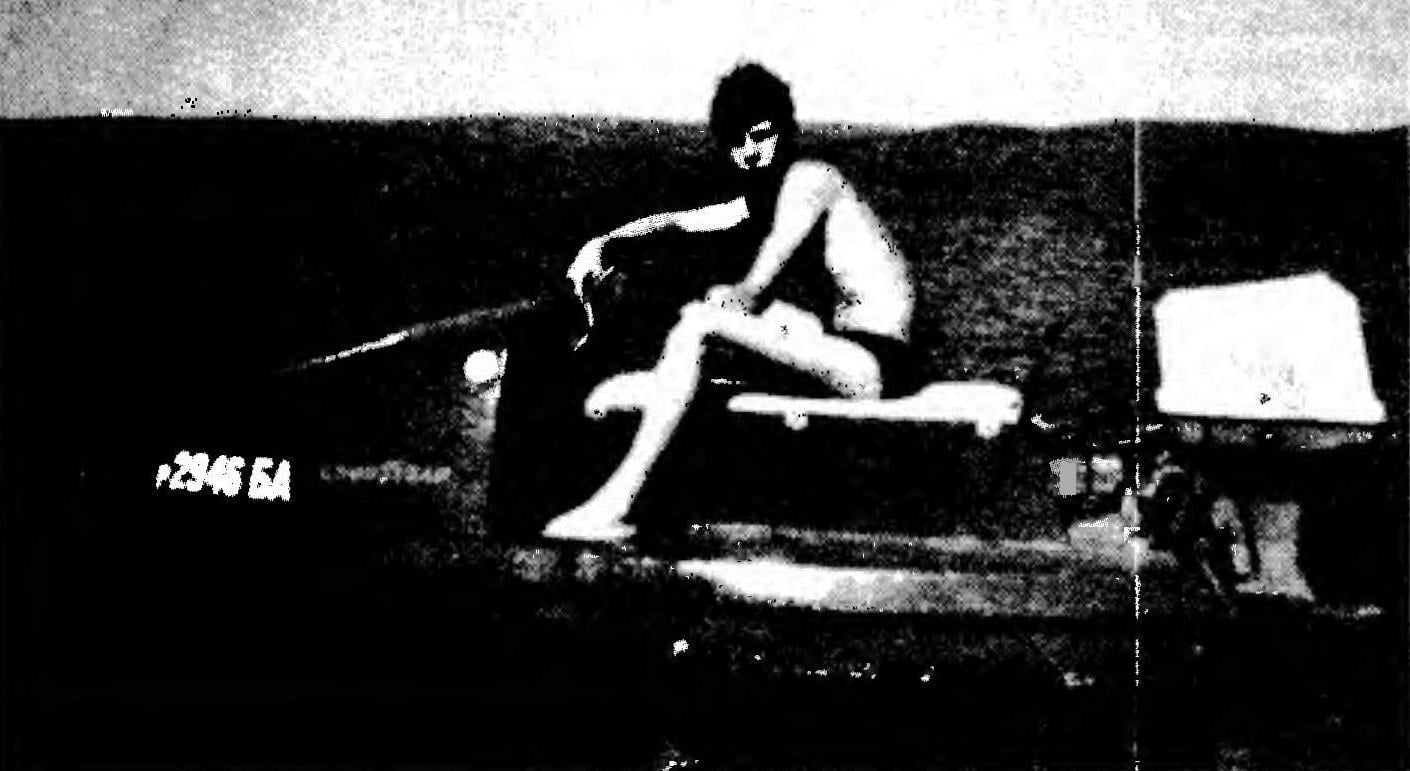 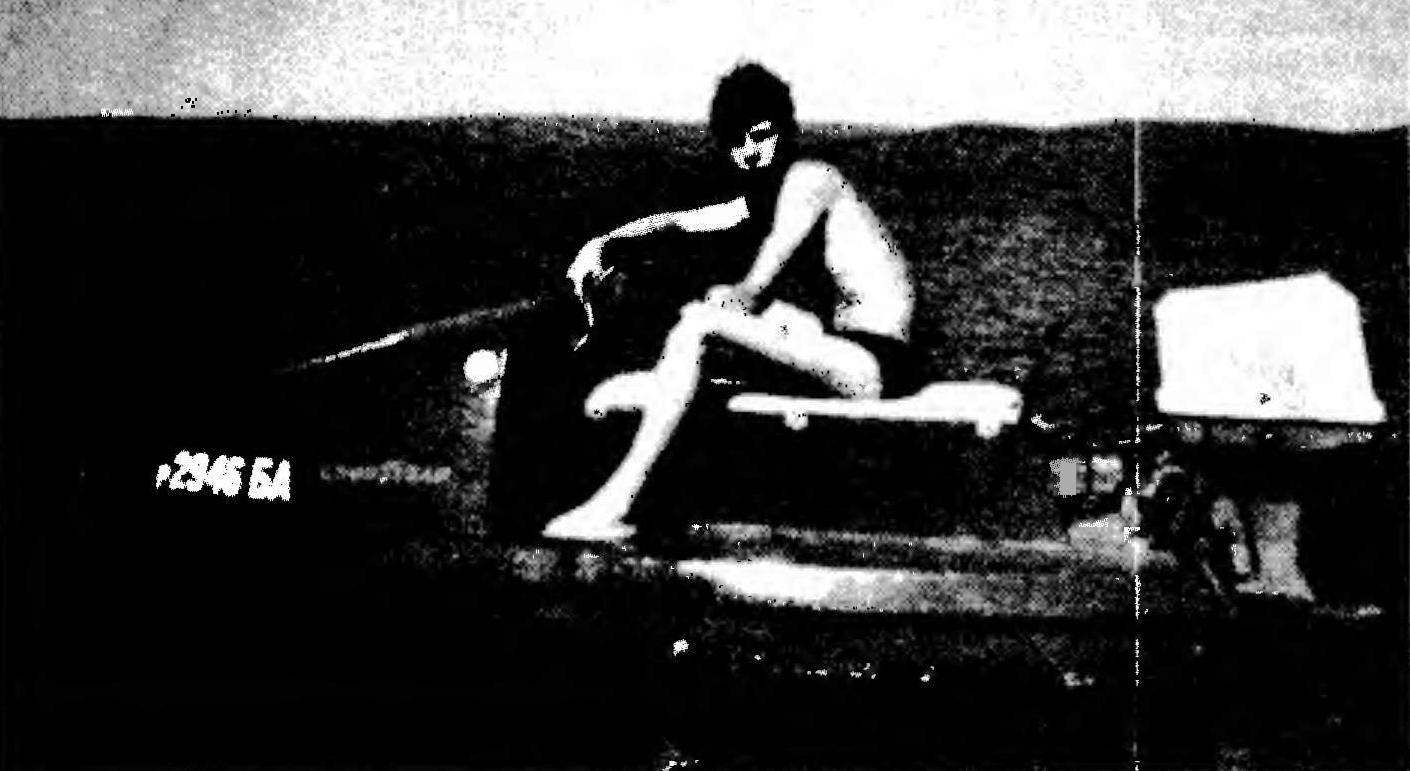 With the best examples of technical creativity S. P. KOROVIN, designer from the city of Kumertau (Bashkortostan), readers of our magazine are already familiar. In the “photo stitch” (see “modelist-Konstruktor” No. 1 2000) was presented his most famous design: the plane “Visit”, children’s car, seven-seater “Orbit-1500” and the water motorcycle (jet ski). Later readers appreciated another Stanislav Petrovich development company “askor” (“modelist-Konstruktor” No. 4-5’02). Now available “Marlin” is an improved version of the watercraft, published in “Panorama”. “Marlene” is superior to its predecessor in terms of maneuverability, comfort and design.

In Bashkortostan a lot of rivers and lakes, on the shores a great place to spend the weekend. Often a lovely summer morning Korovina was getting into his “Orbit-1500” and went to the nearest pond. It is one thing to rest only on the shore, the other still on the water. Stanislav had a motor boat, but for transportation it required a rather bulky trailer. So never took the boat with me…
Once Stanislav, looking through technical literature, he suddenly realized, as he finally solve the problem of water recreation. In one of the technical journals he saw the figure, three projection of a jet ski with dimensions. And a short explanatory text. Stanislav remembers only that the jet ski was called “Marlin”. It then left your apparatus. Although its power circuit and fabrication technology was developed independently. He himself had experienced the new design.
The design and construction of the watercraft gone several winter and spring months. Summer Stanislav hung on a transom Board of a boat motor Breeze (eight horsepower) and pulled the “Marlin”… in the city pond. With a single rider jet ski and there is even glissirovat! But to travel together in motor output “Breeze” is not enough. 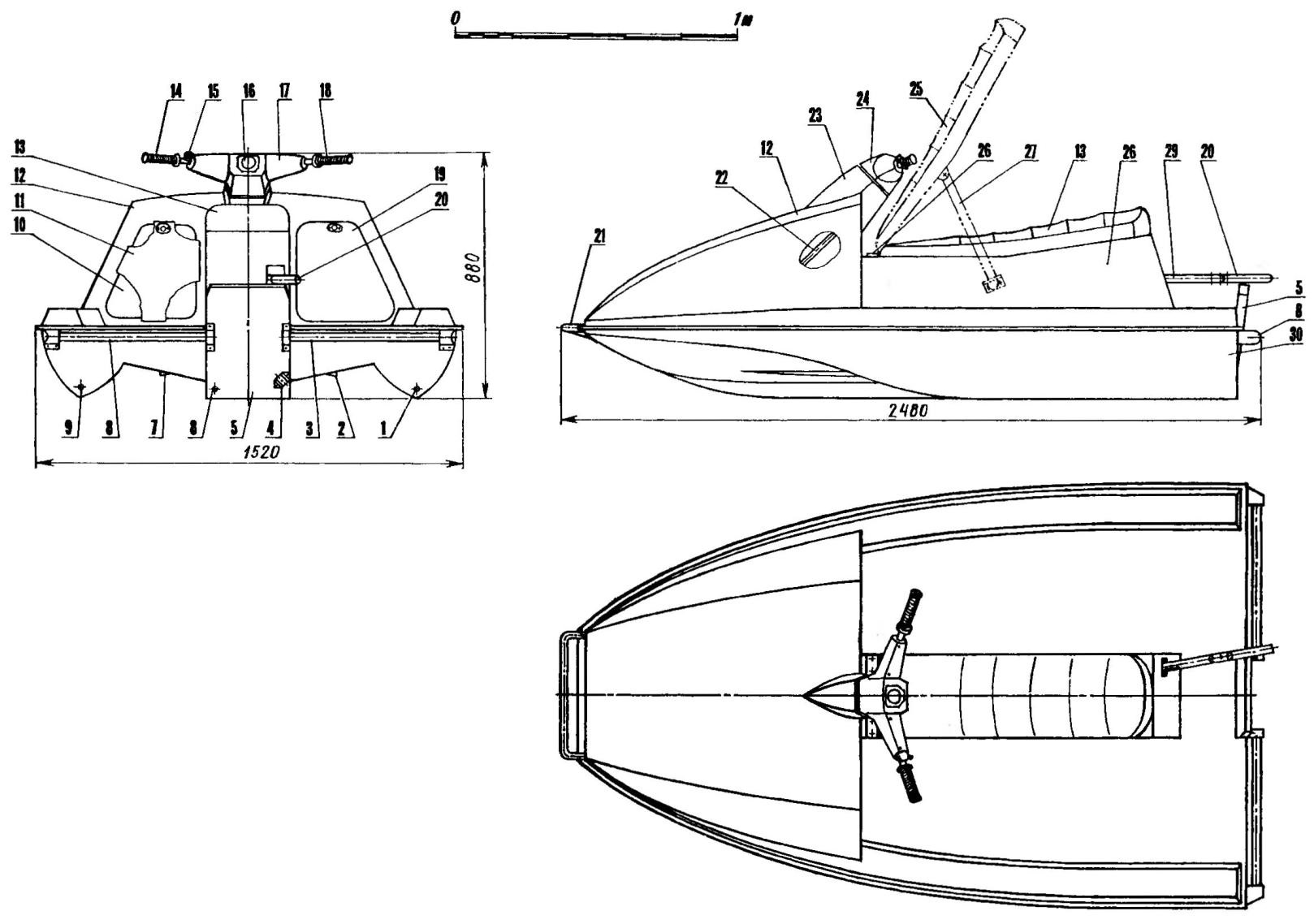 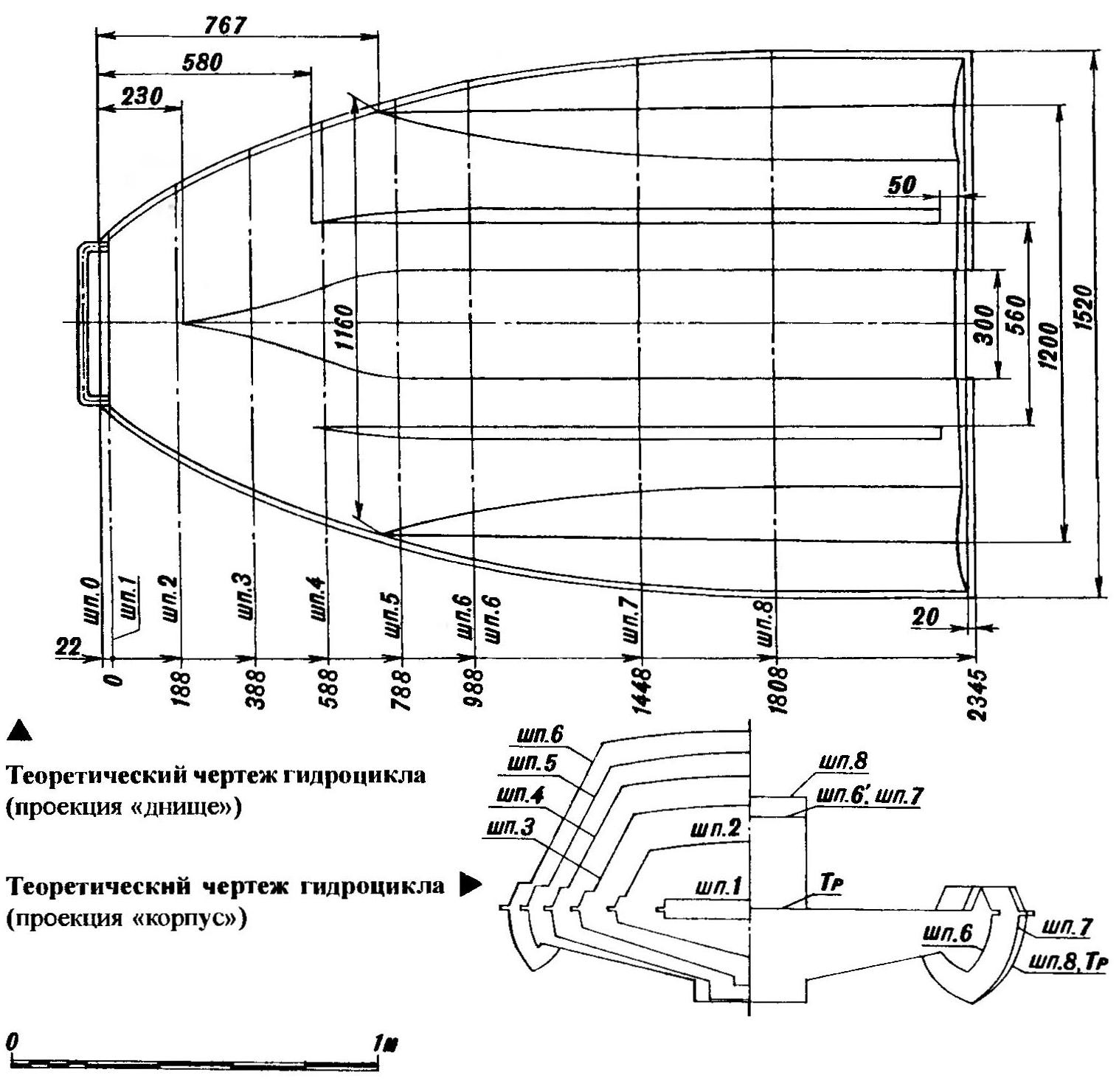 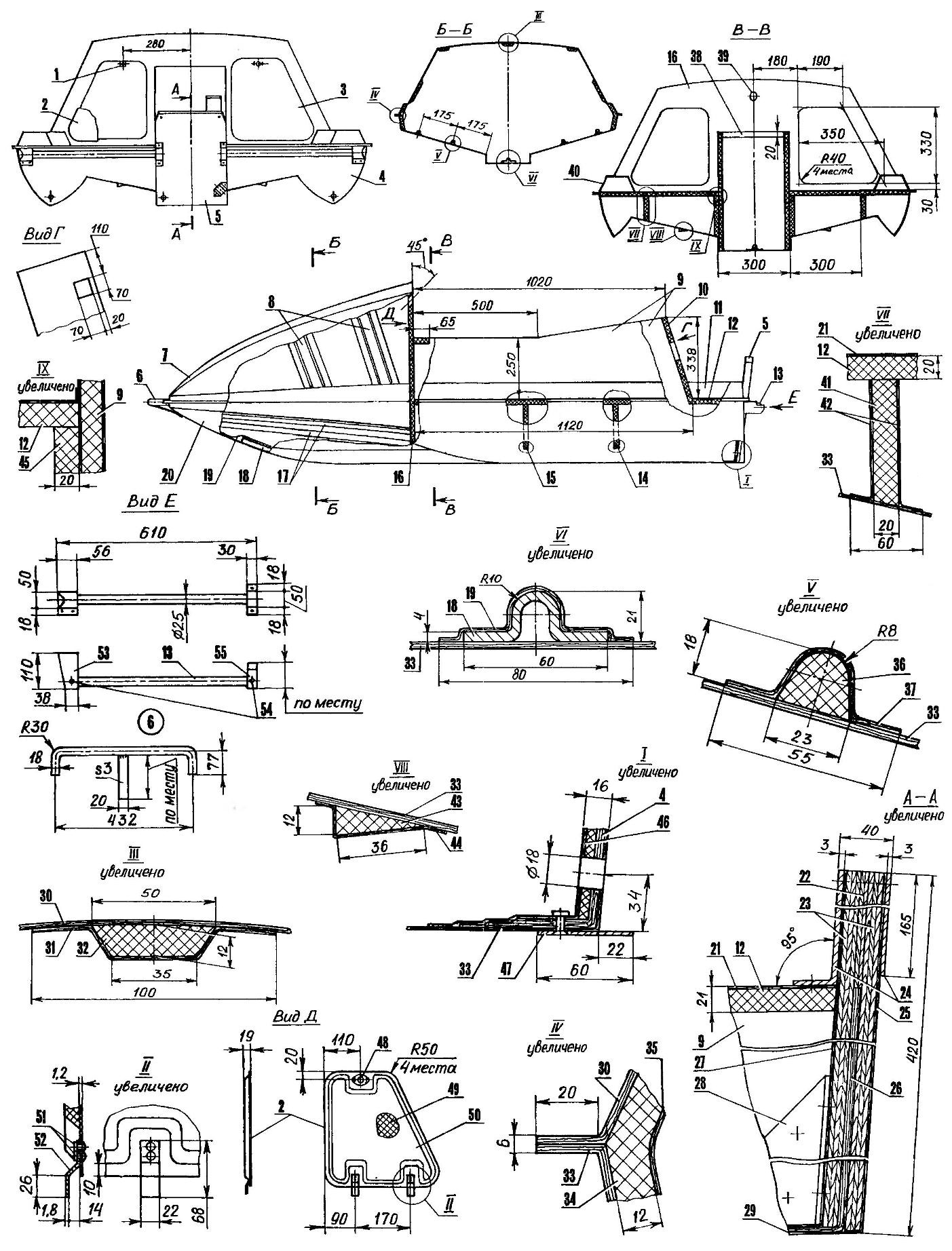 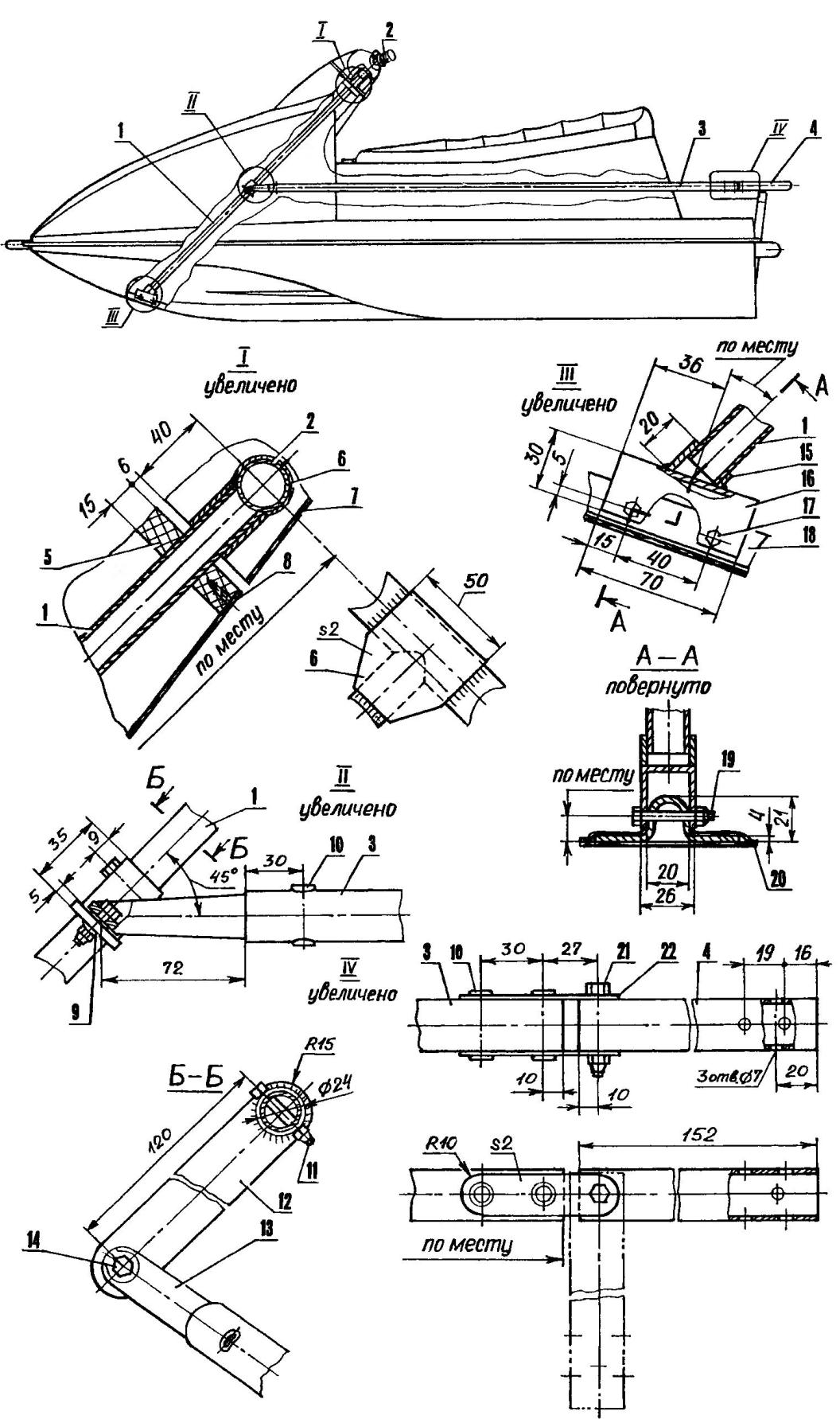 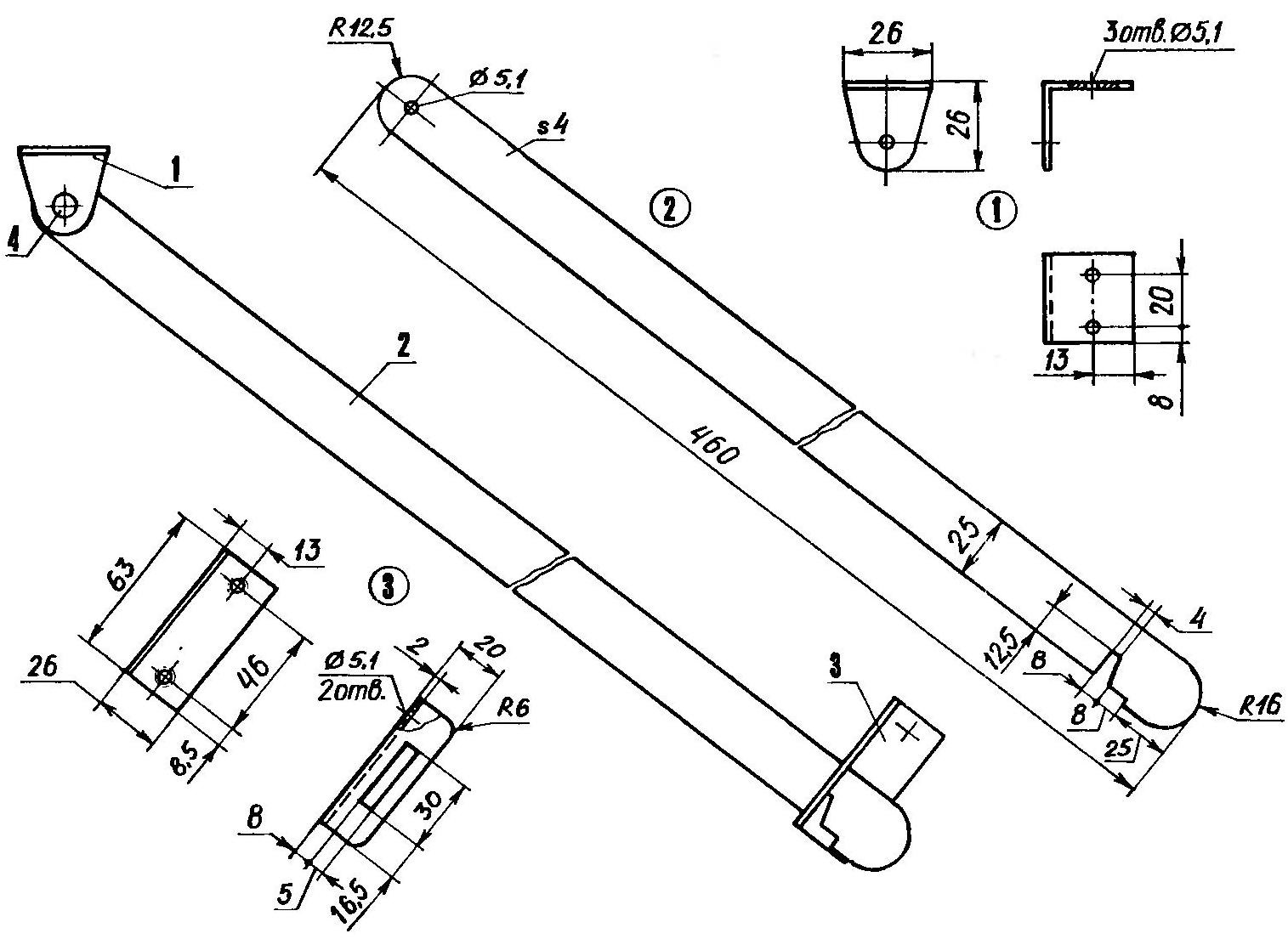 The lock raised seat:
1 — loop (D16T, area 26x26x2); 2— the lever (D16T, sheet s4); 3 — focus (D16T, area 26x20x2); 4 — rivet Ø5 (AMC)
In the Central area of the transom wearing the epoxy transom Board on which hung the outboard motor. The Board consists of three layers of plywood of different thickness. After installing it on the transom on both sides were covered with glass cloth (four layers) and reinforced with two aluminum pads under the clamp motor mounting. This whole package for brake linings pulled along the contour six M5 bolts, and a shelf front plate is still attached by three screws to the deck.
Since the main force from the engine to the hull of the watercraft transmitted through the transom Board and the aft wall of the trunk, the junction Board and walls in the depth of the boot are reinforced with two triangular gussets of duralumin sheet thickness of 3 mm. Rear flange width of 20 mm each gusset plate fastened to the Board with the four screws on epoxy glue, and a triangular plane to the wall by four through-bolts M5.
To the outside of the transom and the transom Board is attached with M5 bolts handrails of the dural tube, the brackets which are riveted from sheet titanium. In addition, handrails are used when towing a water skier. The umbilical cord (nylon cord with a diameter of 5 mm and a length of 30 m) is attached a carabiner to the external brackets of the handrail.
The deck of the watercraft is also made from a sheet of foam of thickness 20 mm, covered on top with fiberglass. The deck relies on frames No. 7 and 8, the longitudinal bulkheads and the ends of the walls of the aft compartment in addition, on the supports from the foam bars section 20×20 mm, attached with epoxy glue to the walls aft of the trunk. The contour of the deck is glued to the frame No. 6, the joint between bottom and sides of the transom.
And again. In the left bottom corner of the transom Board has a hole to drain accumulated in the feed trunk water, closed tight with a cork, and in the lower right corner of the attached mounting bracket remote receiver pressure flow of water (speed sensor). Speedometer receiver connected by a thin rubber hose, laid on the aft wall of the trunk and dumped into a hole in the end cap of the trunk at the level of the deck. In the same harness with this hose also routed the cables from the battery and the cable throttle actuator control throttle of the carburettor on the steering wheel.
From the same end caps mounted outside (through another hole) and fuel hose with embedded in a “pear” of the transfer pump.
STEERING
All the controls of the jet are concentrated on the steering wheel, located on the cut fairing nose trunk. Steering shaft — steel pipe of diameter 20 mm rotates in two bearings: the nest of a U-shaped heel screwed to kilimo bar, and polyurethane washer, integrated in a decorative casing of the steering wheel. To the upper end of the shaft welded crossbar handlebar of steel pipe with a diameter of 25 mm, the “horns” which put on the motor arm (speedometer and controls here too motorcycle).
On the wheel of the first “Marlin” was not a decorative fiberglass shell. But in the new version and I must say, has greatly enriched the design of the watercraft. At least now he looks finished.
About the middle of its length, the steering shaft has a steel bipod, pivotally connected with a rather long dural traction. As the hinge is used is pressed into the end of the Pitman arm ball bearing SHS-6, commonly called a “fish eye”. It permits travel in a wide range of angles, which is very important in the management system of the watercraft, the control action pull is transmitted to the massive engine, forcing him to turn and change its position on the transom Board.
The front end of the tie rod end equipped with a nozzle for connection with the ball bearing, and the rear is connected with the rocker, mounted on the outboard motor.
Start combination of motors “Whirlwind — Hello” with a push button starter. Upon failure of the battery used by the starter cord.
Everything you need during a trip is aboard the “Marlin”. Side the property is distributed on the trunk: outboard fuel tank capacity 20 l, tow tether, fishing tackle and other Luggage — in the nose; battery, tool kit, folding paddles and personal belongings in the rear.
It’s not the latest upgrade to “Marlin”. To master shallow backwaters, inaccessible even motor boats, Stanislav intend to equip your watercraft a water-jet engine, good layout of the apparatus allows for such revision. Structurally, his water cannon on the quarter is already done. So, next summer Korovin will need to look no longer on Nugushskoe reservoir…
The main characteristics of the watercraft “Marlin”
Length, mm…………………………………2480
Width, mm……………………………… 1520
Height, mm………………………………….880
Weight without motor, kg…………………50
Maximum speed, km/h ……….55
Maximum load, kg………….150
Engine power, HP………………30
Fuel capacity, l……………………………20
A. TIMCHENKO