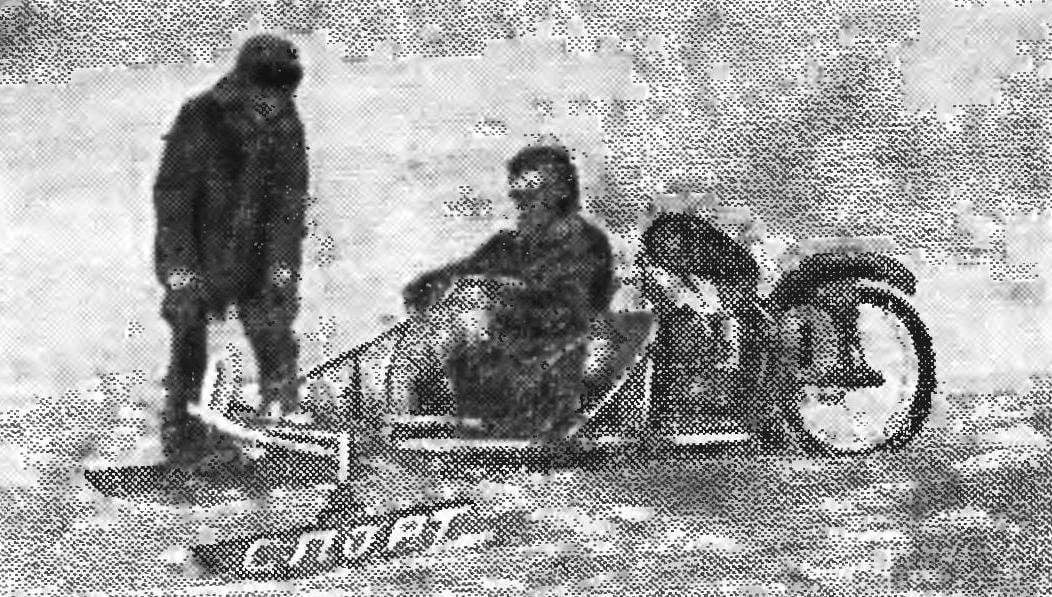 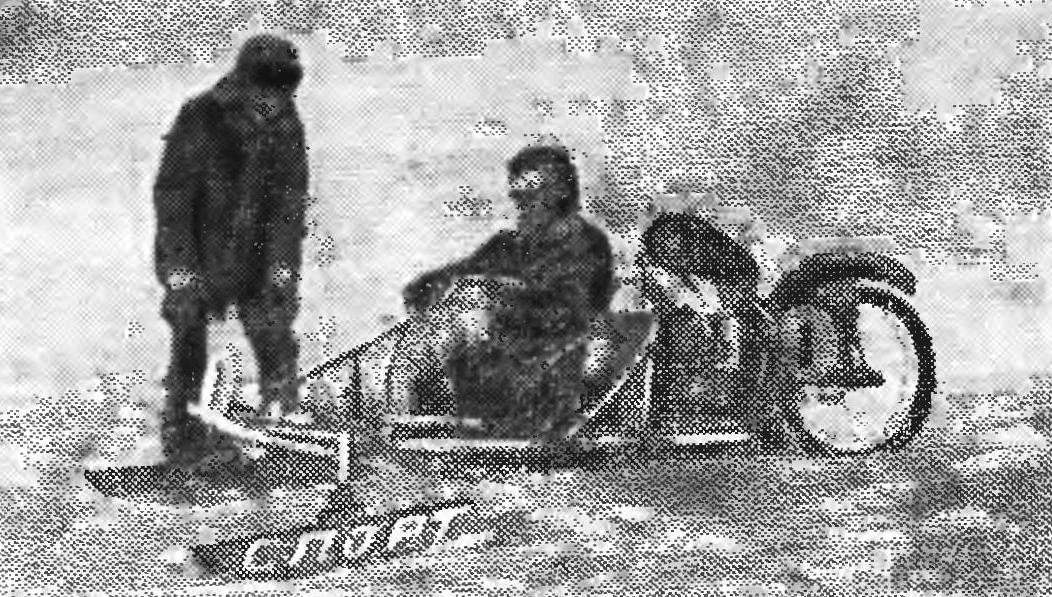 This at first sight a strange car Gaul Ibrahimovic Khusainov from the city of Ufa was called motoboom. However, if an ordinary Buer is moving on ice or compacted snow, this easily goes over the snow.
With descriptions of a machine of this class we have already introduced our readers (see the article “Vyatka” skiing”, No. 2, 1972 “.Floating ice “Kaloor”, # 1, 1973). They can be called a wheel-ski terrain vehicles. Experience has shown that such machines are finding increasingly wide application. And it is quite natural: an intense exploration of the vast expanses of our country, the search operation in Siberia and in the far North require completely new technical solutions and not least of all-terrain vehicles. Snowmobile, motonarty, ATVs amphibious type, for aerodynamic and wheel-ski ATVs is an essential assistants. Enthusiasts of technical creativity make a feasible contribution to their development. Mateboer D. I. Husainova — example of the determination of search Amateur designers. That’s what tells the author.
I have long wanted to make a fast car with a high cross for winter conditions. And here on the base frame from the map was built on three snowmobile ski wheel propulsion.
The car was going good on compacted snow, but on loose deep cover wheel started to slip due to the fact that the main load of the weight of the vehicle had no wheel, and skiing. There was another omission: the high mounted driver’s seat, almost over the engine, raised the center of gravity and deprived mateboer of stability on bends. To address the shortcomings, my son and I had to redo the car.
In the new design of the driver’s seat folded down, the front has two guided skiing (for traffic on compacted snow they can be replaced by a special skate like ice-yacht). Motor K-175, athletic. The transmission from the engine to the wheel, and a motorcycle chain. The driving wheel is back on the pendulous fork. It carries most of the load from the weight of the machine and the weight of the driver, which ensures good grip with the ice and prevents slipping on the snow. 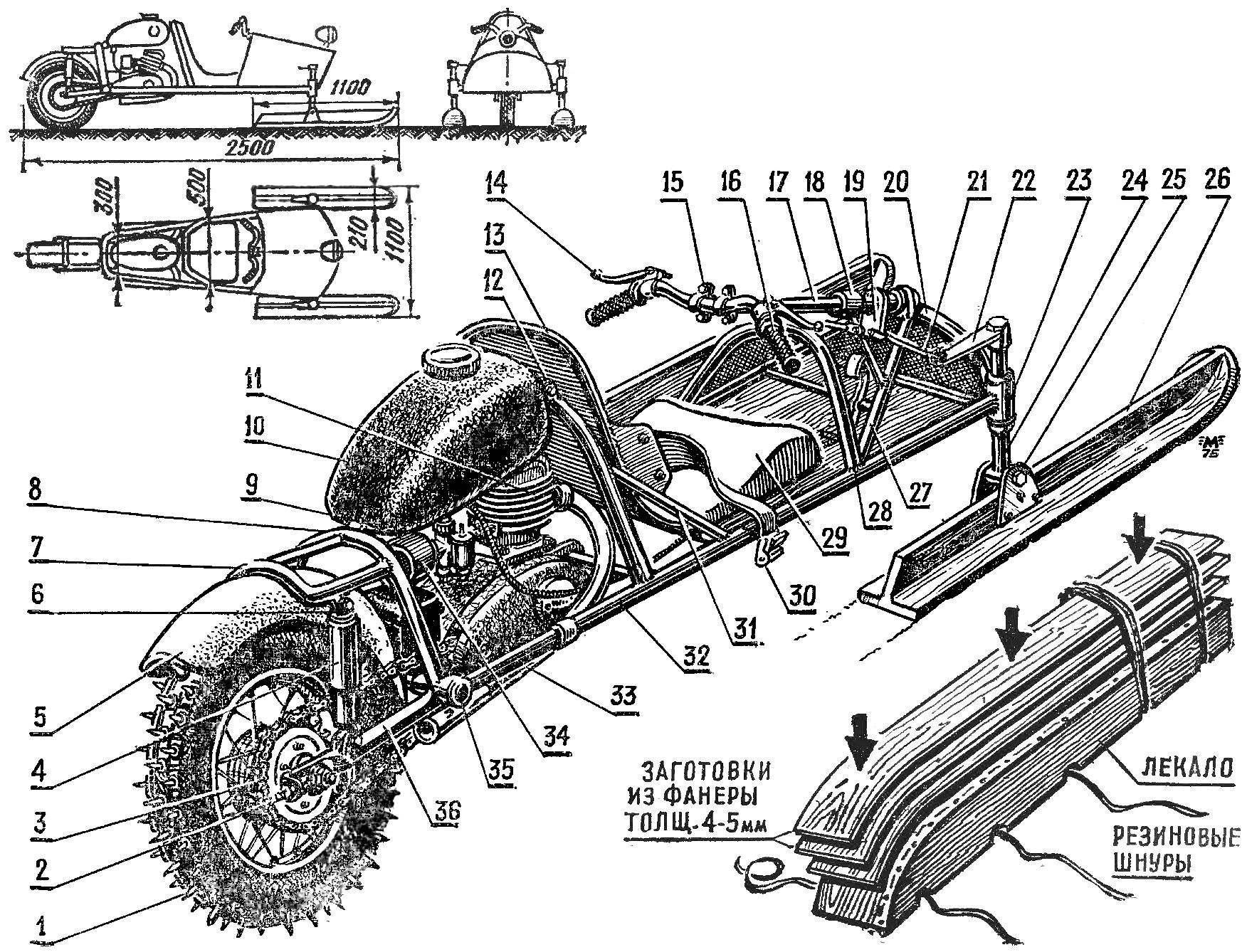 General view and scheme in three projections:
1 — driving wheel with spikes screw mount; 2 — stretch the chain; 3 — a leading chain; 4 — spring-hydraulic shock absorber of the pendulous fork; 5 — flap drive wheel; 6 — the eye of the shock absorber; 7 — frame suspension wheels; 8. suspension; 9 — posterior point of attachment of the petrol tank; 10 — tank; 11 — engine-175; 12 — anterior point of attachment of the petrol tank; 13 — the back seat of the driver; 14 — clutch lever; 15 — clamps handlebar mounts to the steering shaft; 16 — grip throttle; 17 — steering shaft; 18 — a steering shaft bearing; 19 — the lever of steering gear; 20 — anterior arch frame suspension; 21 — tie rod; 22 — rotary lever of a rack of skis; 23 — clutch; 24 — hour ski; 25 — cheeks; 26 — stiffening of the ski; 27 — brace; 28. frame; 29 in the driver’s seat, 30 — seat belt; 31 — brace seat; 32 — longitudinal tube suspension; 33 — exhaust pipe; 34 — air cleaner to carb with a mesh of nylon stocking; 35 — axis of the pendulous fork; 36 — way plug. Bottom right shows the Assembly of the skis from plywood blanks on a special template.
Very illustrative is the following case: I decided to try your mateboer motorcycle on the road, where took place the training sessions on motocross bikes. After receiving permission to go on the road on motorware, I started at the same time with a motorcyclist, the car which had the same engine. Before the start there was much debate among the racers who’s faster. On my design I laughed, not believing in its suitability. But given the start. Revved the engines, the motorcyclist took the lead. Through 150-200 m began deep snow. Its thickness sometimes reaches to about 25 cm before Going ahead motorcycle zayulil dramatically slowed. Here is the machine and showed their driving performance. She walked steadily and with much greater speed, despite the abundance on the road climbs and sharp turns. What was the surprise of the athletes when mateboer gone the distance much faster motocross bike.
Subsequently conducted the test gave the following results: speed on crisp snow — 95, on the loose in the middle — 50 km/h.
What is mateboer? Its frame (see picture). welded from thin-wall steel pipe Ø 2-5 cm In front of it expands, and there are welded guides, which includes swivel stand mount skis or skates. The track width of the skis 110 cm Sleeve connected by a transverse tube, which plays the role of bumper cars. At the rear of the frame much narrower and ends in a transverse axial tube on which hung the pendulum fork rear wheels.
Between the wheel and mud flap closed, and a seat on a frame mounted engine, and above it hung a conventional motorcycle gasoline tank.
The seat is placed in the middle of the frame, at the level of the bottom of matabuena.
Two tubular bracket above the bottom of the support inclined steering shaft, which is fixed to a motorcycle wheel.
From rocking on the steering shaft the force is transferred to a tubular steering tie rods to the hog rotary axes of the ski, with threaded ends for adjustable length. Additional front transverse tube housing the foot brake pedal.
Motor ice boat is very stable on the move and has good maneuverability.