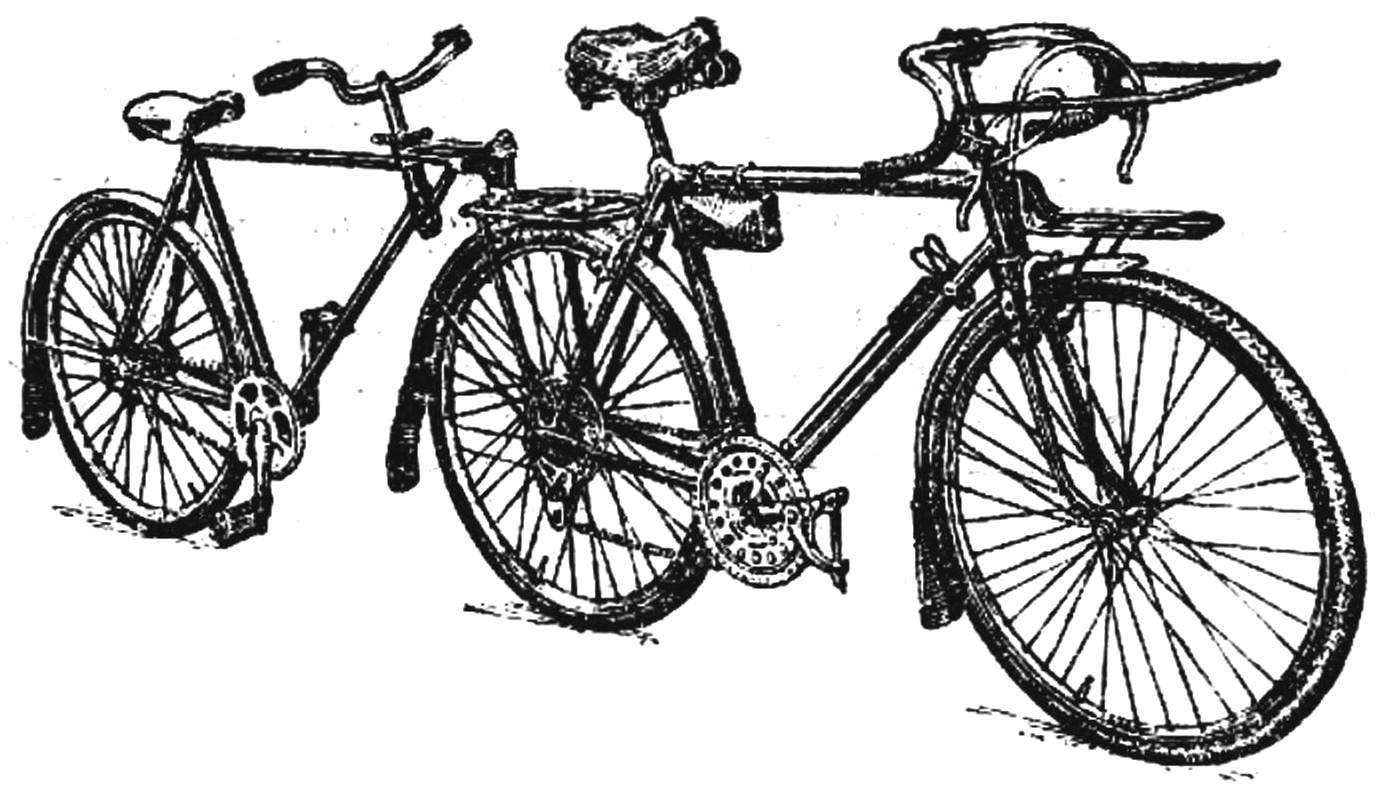 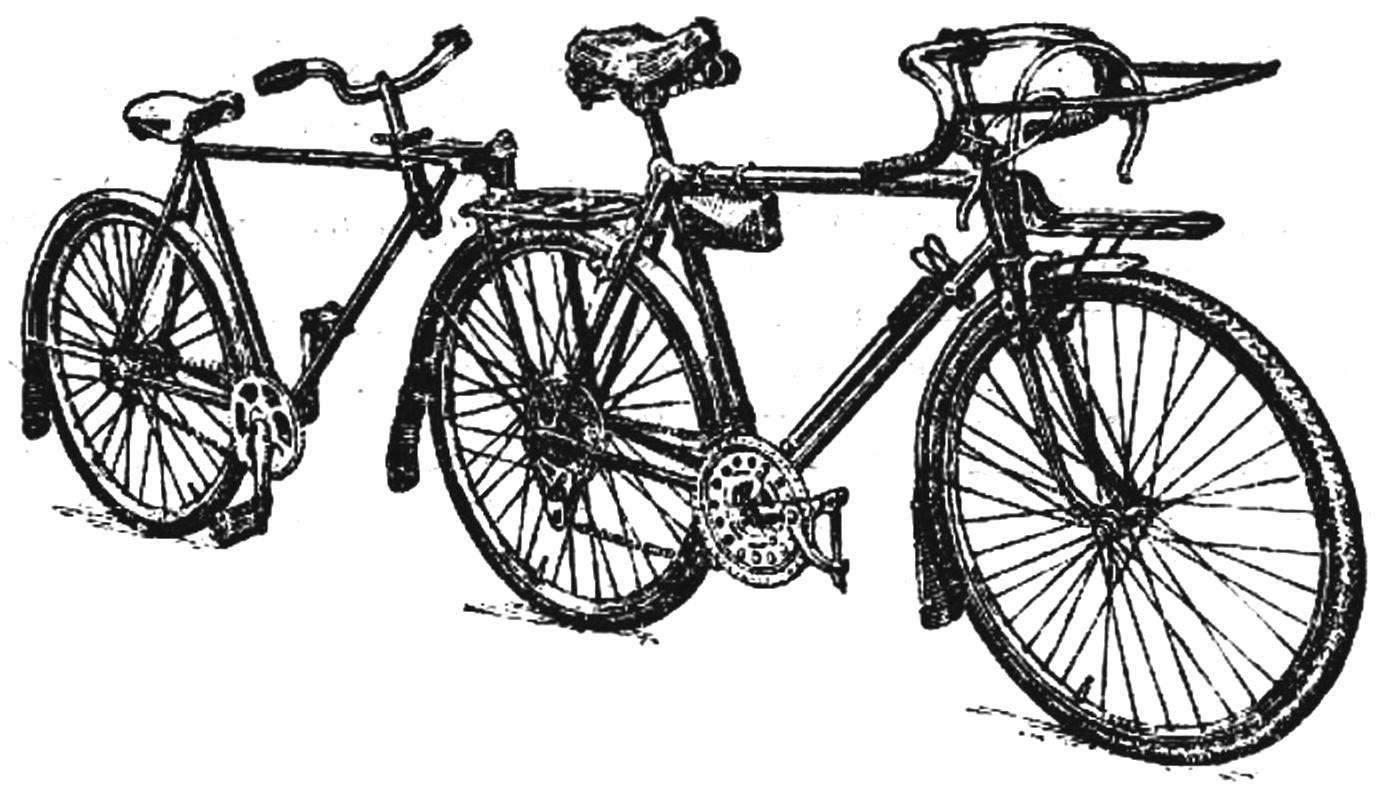 Description a three-wheeled tandem, published in the journal (№3, 1979), I liked inherent in it the idea to tandem bike of the usual single, without making major changes to the original design. But the proposed version was not very satisfied: still frame of the second bike had undergone the unwanted interference. I wanted to find a way of articulation, that when there is no need to tandem it was possible to restore the bike to original form.
So I started looking for more simple and universal solution.
The prevailing advantages of this option (Fig. 1, 2) that of the original structure remain “intact.” Just on the steering wheel of the second bike is a small bracket similar to installed on some models the front trunk. And on the back, reinforced trunk bike first established by connecting a cross head bushing-hinge (see Fig. 2).
The proposed design has the same operational advantages, as previously published, but much easier to manufacture. Improvements are the same.
To the trunk first bike welded heel with holes for M4 screws: this will be attached to the base of the pin. And he is made from the stem of the front fork (selected from old or spare). The bottom bolt is welded to the base, and on top of it fitted with slotted bushing-hinge. As the vertical part can be used to cut the steering sleeve of the old bike or the blank inch pipe: it ends pritachivajut under the cups of the bearings of the steering sleeve. Krestovina (horizontal) part is made of three Ø 28 mm. it is inserted Into the axle with the bearings from the old front wheel. Thus, the cross-joint will provide two degrees of freedom: rotations around the vertical and horizontal axes. 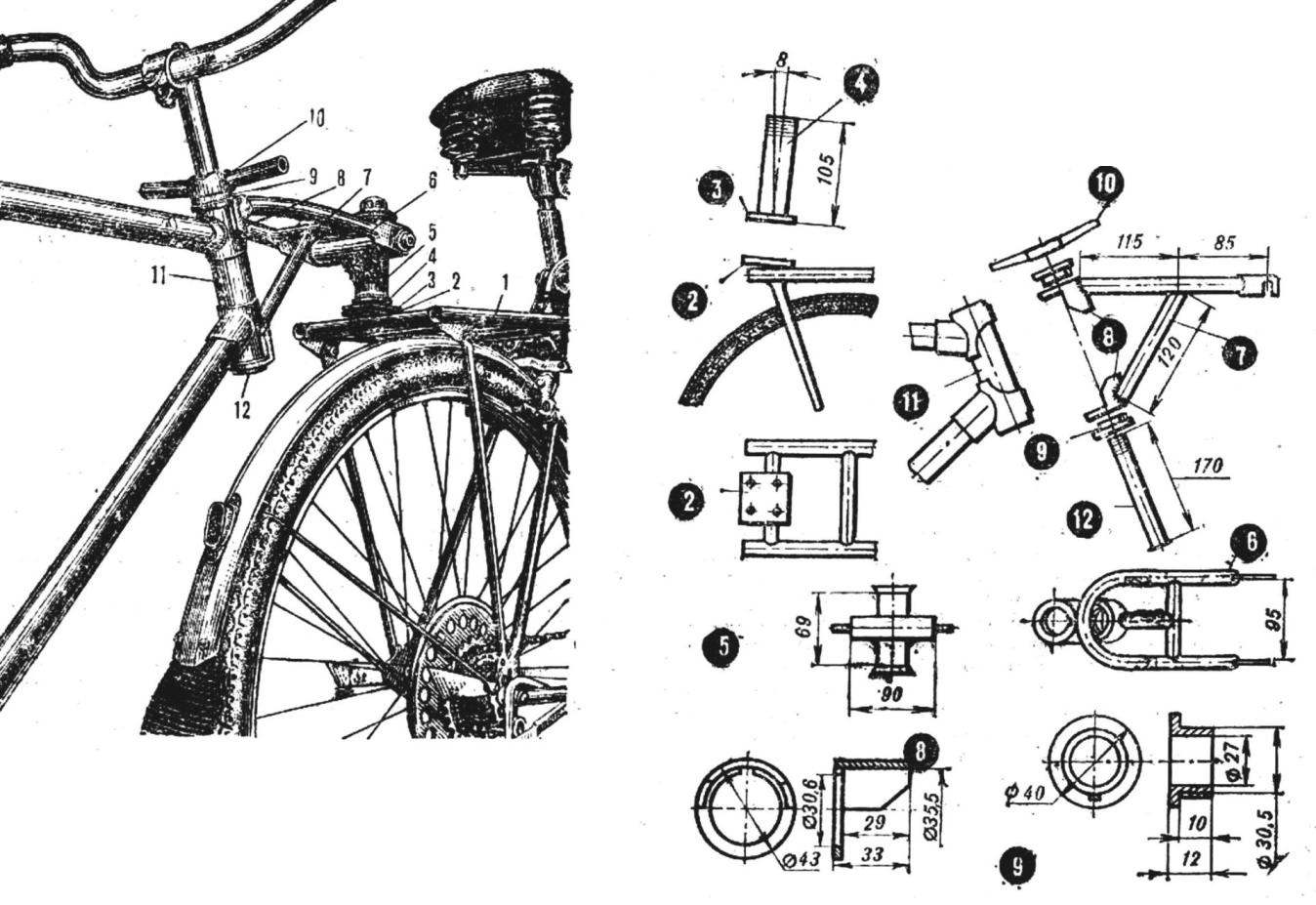 Fig. 2. Scheme of coupling of the node and its details (the dimensions are only limiting):
1 — boot, 2 — foot, 3 — base king-pin, 4 — pin, 5 — cross-hinge, 6 — bracket, 7 — brace, 8 — Cup, 9 — pocket, 10 — wing nut, 11 — steering bushing, 12 — coupling.
The fixing unit of the second bike (the bracket) is made of a thick-walled tube Ø 14 mm (it is possible to use suitable parts forks old bikes). Externally, the bracket is similar to a mini-plug with a crossmember and strut. The top curved part and the bottom end of the strut welded to the cutting cups, put on the steering sleeve of the second bike. Using a hollow coupler, the two inserts wing nut bracket is mounted on the steering sleeve; in his usual way set the wheel. As the screed can be used rod front fork old bike.
Having built and tested this tandem, I was happy; convenient, simple and reliable in operation.
V. KARPUKHIN, locksmith factory “air conditioning” in Kramatorsk