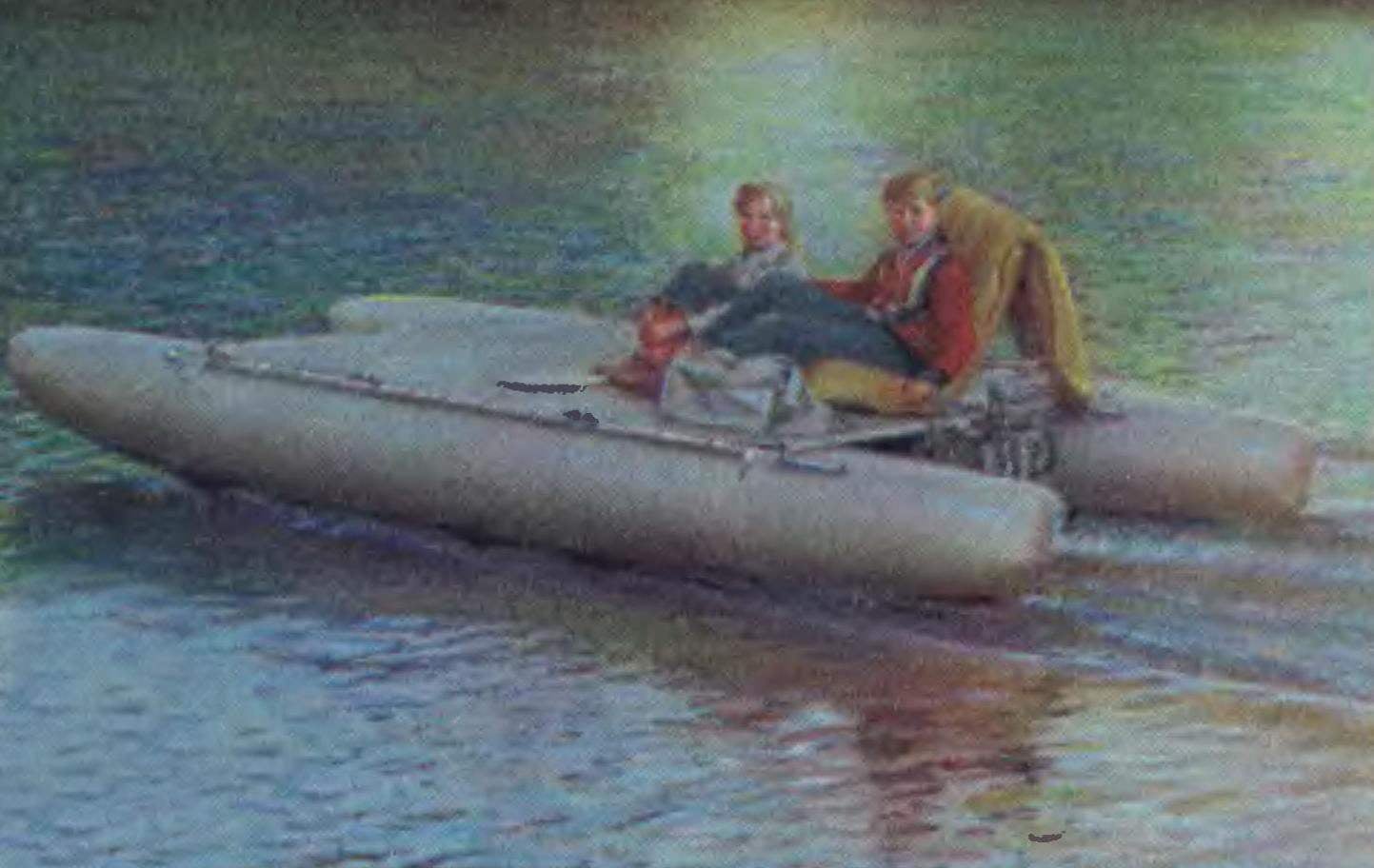 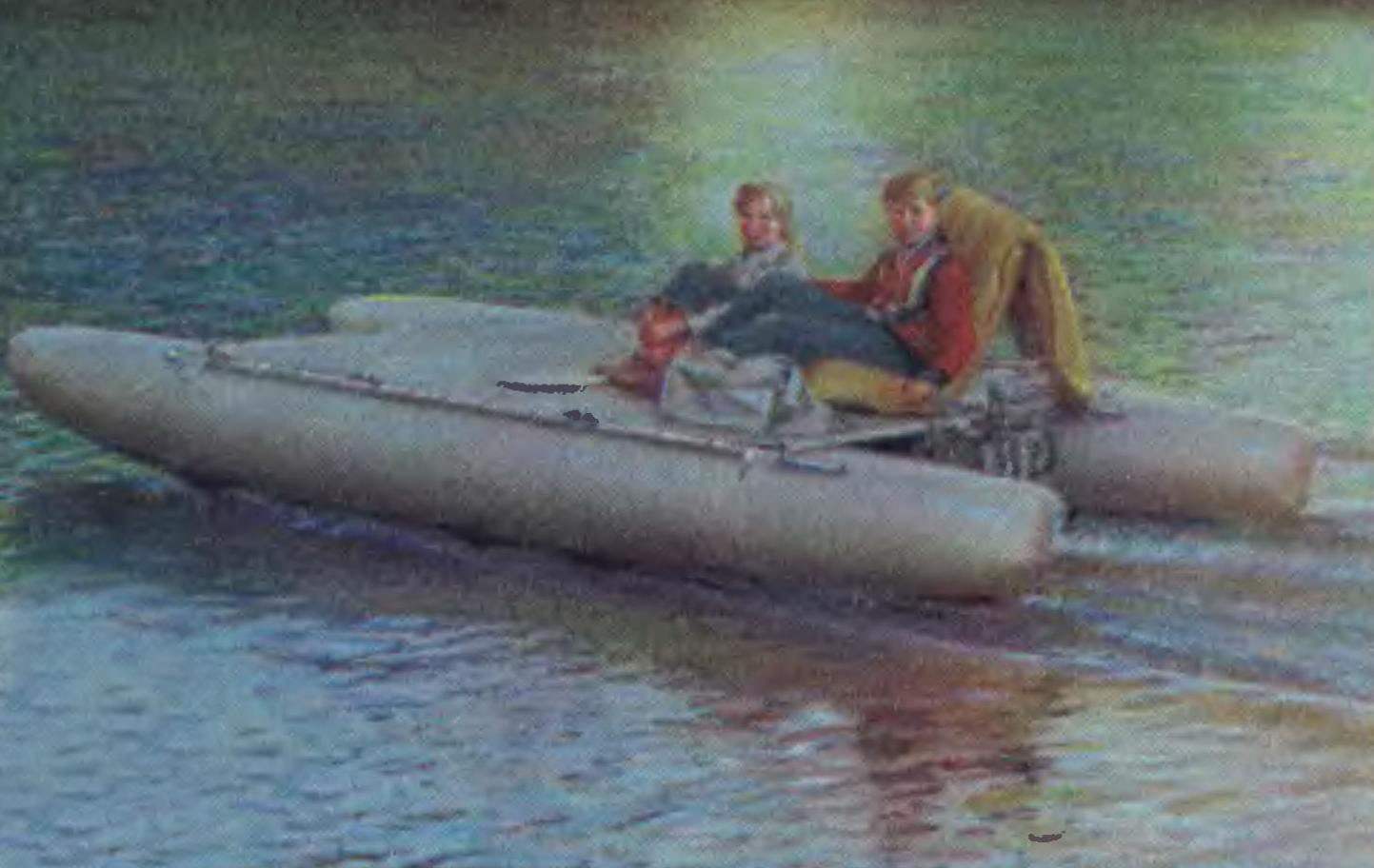 There are few in Russia, popular publications, which members are loyal for… thirty years! The magazine are subscribers there. Muscovite Gennady Mikhailovich SMIRNOV — one of those who keeps the house binder “Modeller-designer”, as far back as 1966! By profession he is a driver. In his spare time he likes tinkering. A catamaran with a motor — his latest development, which he offers to all who wish to spend a holiday on the water.

Vacation we usually on the Ivan’kovskoe reservoir in the upper reaches of the Volga. We are two families: mine and my friend. Put the car in the chill, pitch the tents down on the water inflatable boat. While our wives and children soaking up the sun, gather mushrooms and berries in the Islands, we catch up with a friend, walk and smoked fish. And live the entire vacation.

All is good, but here’s the downside: every day you have to transport to the Islands of the wives and children. And for once in a small boat all away. There, now here — spent half a day. And his hands burn from the oars.

So I had the idea to build something more solid inflatable boat with greater speed, but preserving at the same time the main advantages of lightness and compactness. So there was an inflatable catamaran with an outboard motor.

As a basis, for the sake of saving time — I was approaching another holiday— we took a catamaran-equiped Kharkiv V. Popovich, whose description is published in the “Modeller-designer”, No. 4, 1989, to be exact — it floats and valves.

When cutting the shell of the float with its length has been increased from three to four meters (Fig. 1). Durable synthetic fabric was not found, so used what was at hand — “the silverfish”. Taking into account the allowances for seams (40 mm per side) cut along the theoretical lines for each shell in the two cloth and sewed them on a standard sewing machine lapped durable nylon thread. 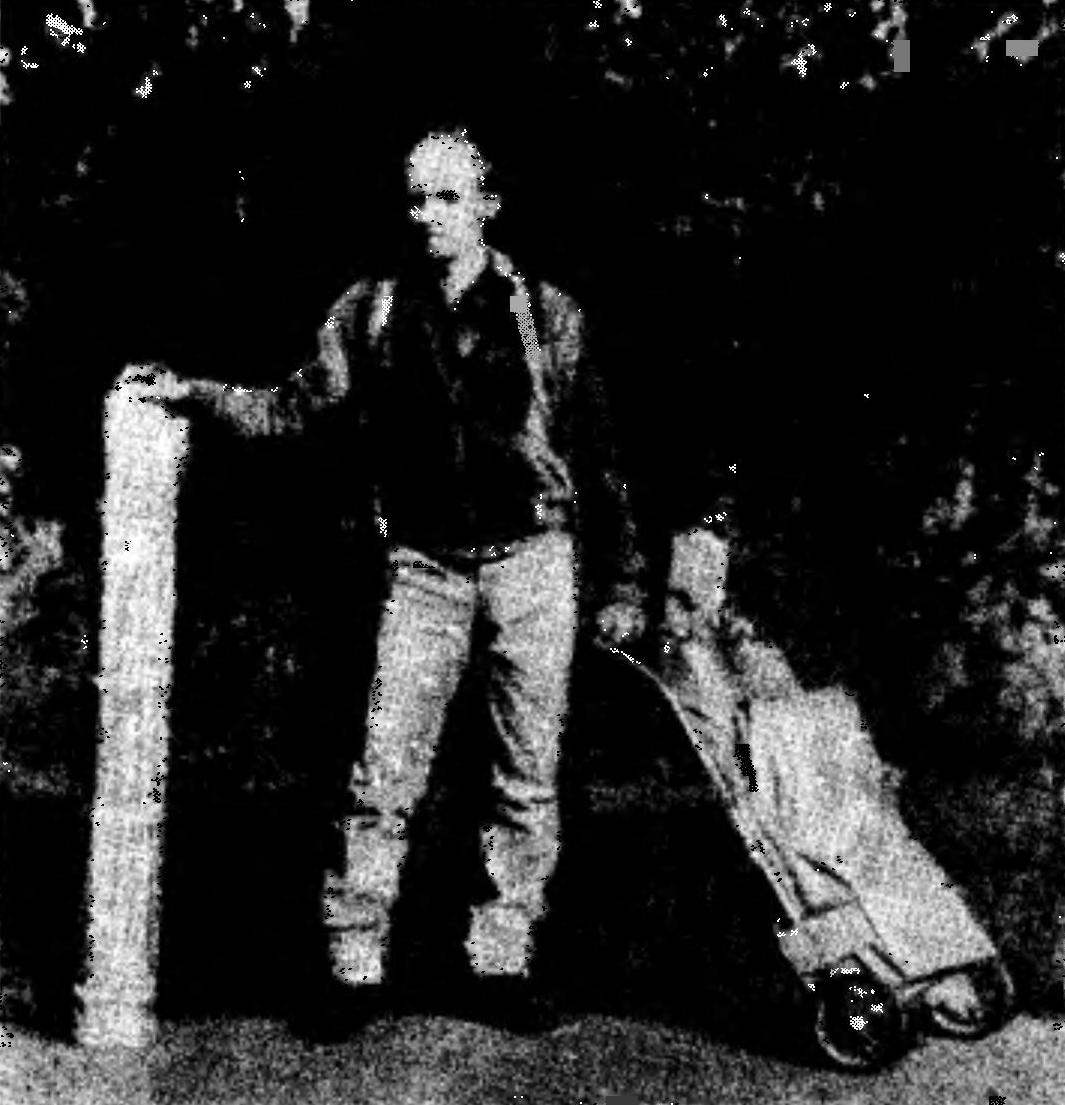 Fig. 1. The pattern of the float chamber.

Fig. 2. An opening in the shell of the float: 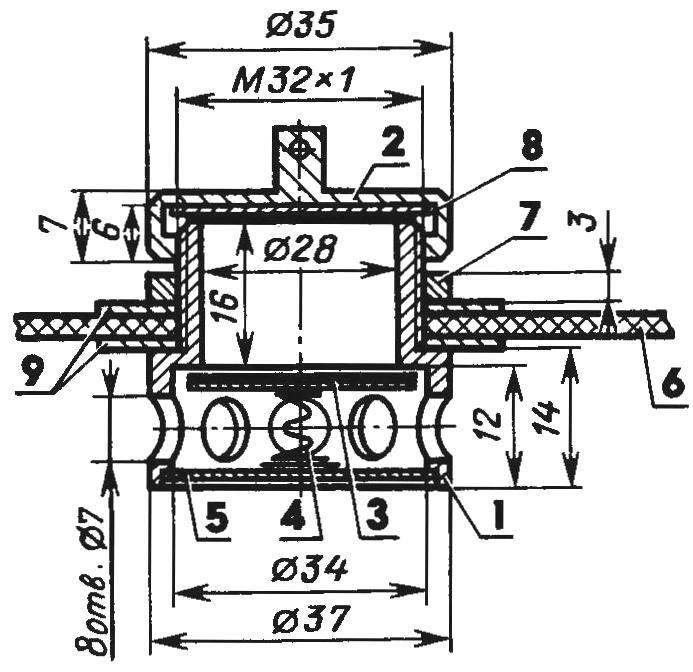 8 — gasket of rubber and dural disks

The camera floats made of medical oilcloth for the same theoretical lines, by increasing all the dimensions by 5%. The cloth was not made and securely glued with “Time” overlap. The seams inside were taped with strips of rubberized fabric, and the outside coated chamber with two layers of rubber cement and powdered talc.

Approximately in the middle of the shell, above, made an aperture (Fig. 2) with soroako, reinforced botami — glued and stitched overlays made of rubberized fabric. Through this opening, and slipped slightly pressurized chamber. Then tightened the laces, and the chamber pumped air to normal.

The valve through which chamber is filled with air (Fig. 3) fully repeats the design of the V. Popovich. It is made up of duralumin shell with eight holes, the membrane with a rubber gasket, steel springs, rolled at the bottom of the casing stub and the hermetic cover. The valve body is fixed on the camera two washers greased with rubber glue, and tighten the nut.

Pump for floats (Fig. 4) is also homemade. It consists of a plywood lid and bottom, which with the pine strips, glue “Moment” and screws are attached to the bag, a cylindrical chamber made of medical oilcloth. To the bottom of the pump screws strapped a belt that has two purposes: to pack the pump and hold it (down) in the working position. 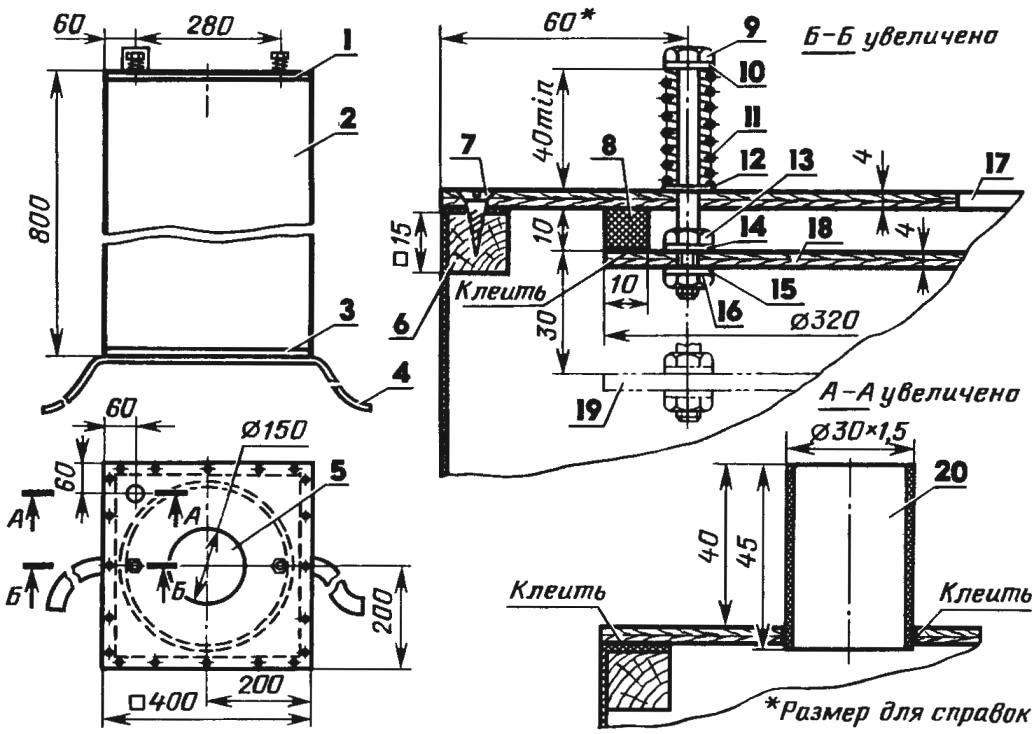 18 and 19, the membrane valve in the closed and open position, 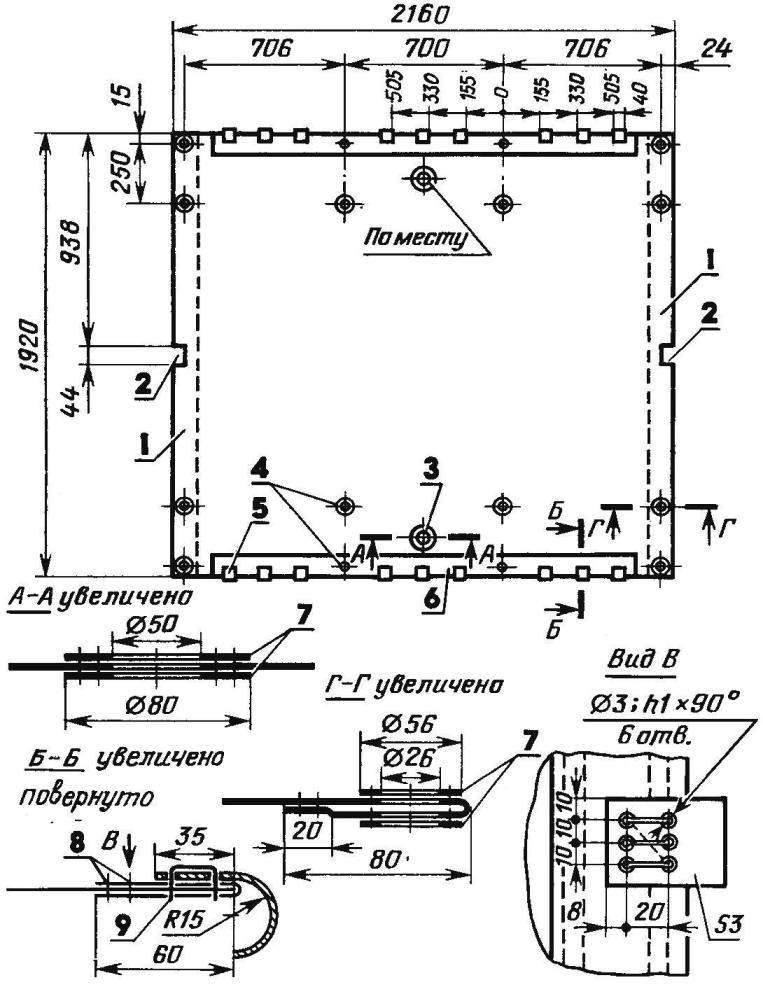 1 — pockets for the cross beam,

The pump cover has the inlet valve and the outlet. The latter is connected to valve float hose — cut a Bicycle inner tube. To fill the bag with air, it is necessary the legs at the ends of the strap to take up the pump cover and pull it upwards. While your thumbs push on the bolts that is holding the valve open. When the bag fills up, the bolts should be released (close the valve), and push down on the pump cover — air with noise will tend to float. Minute other — and he’s pumped.

On the floats, you set the bridge (Fig. 5) portable design of duralumin pipes connecting the floats.

To the transverse beams is mounted on the bottom of the Central beam, consisting of three duralumin tubes: front (diameter 30×1 mm and length 900 mm), medium (diameter 32×1 mm and a length of 800 mm) and feed (diameter 30×1 mm and length 800 mm). Between the Central pipe and the cross beams pulled together a makeshift screws-“lambs” and clamps, curved sheet of aluminum with a thickness of 2 mm. Nuts also serve homemade dural sleeve with thread M8 head which rasklapanje in the holes of the clamps.

All stringers are cut from dural pipes and have the same length (1 m) but different diameters fore and aft — 30×1 mm, medium — 32×1 mm with cross beams stringers with duralumin vkladanie M8 nut, fasten with long screws-the”lambs”.

To the feed tube of the Central beam narrow fiberglass tape on epoxy glue taped focus. It is designed to hold the crossbar of a motor truck when you install it on a catamaran. The emphasis of twisted strips of stainless steel with a length 114, a width 15 and a thickness of 3 mm.

The bridge deck is worn (Fig. 6) — a large rectangular cloth with dense and durable synthetic fabric, better rubberized. The front and rear edge of the cloth, rolled, glued and stitched with nylon thread so that they form pockets for the bow and stern transverse beams. The pockets have end-to-end screw holes-the”sheep”, slotted in place and reinforced on both sides with botami — glued and stitched circular pads made of rubberized fabric. The same botami edged holes for the screws to”the lambs” (except for four sides) and under the float valves.

The lateral edges of the cloth are reinforced with double stitched and taped pads of rubberized fabric. From above they have sewn 18 clamps for tensioning the deck to the stringers. The staples are bent from strips of aluminum 3 mm thick and are sewn to the cloth of thick copper wire. To wire not frayed, holes in the countersink staples and sharp edges rounded with a file.

Deck taut is a vast area, sufficient to accommodate a whole family (two adults, two children and a dog) and a rather voluminous Luggage.

Despite its size, floats, bridge and deck in Packed (transport) able to fit in quite limited amounts: the bridge fits in a cloth case about the size of 1150x150x150 mm with a suitcase handle, and floats, deck and pump on a cart, akin to that with which elderly people go shopping. In addition, the truck is still and the engine of a catamaran — boat motor “salute”. 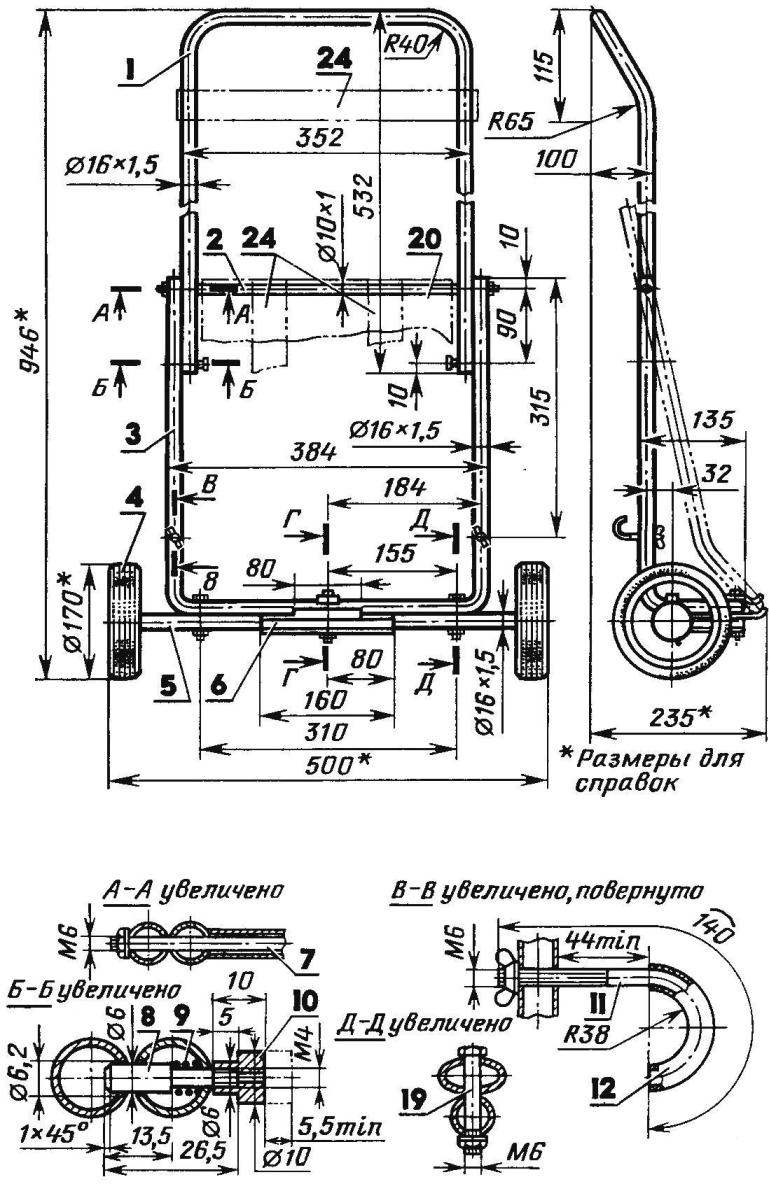 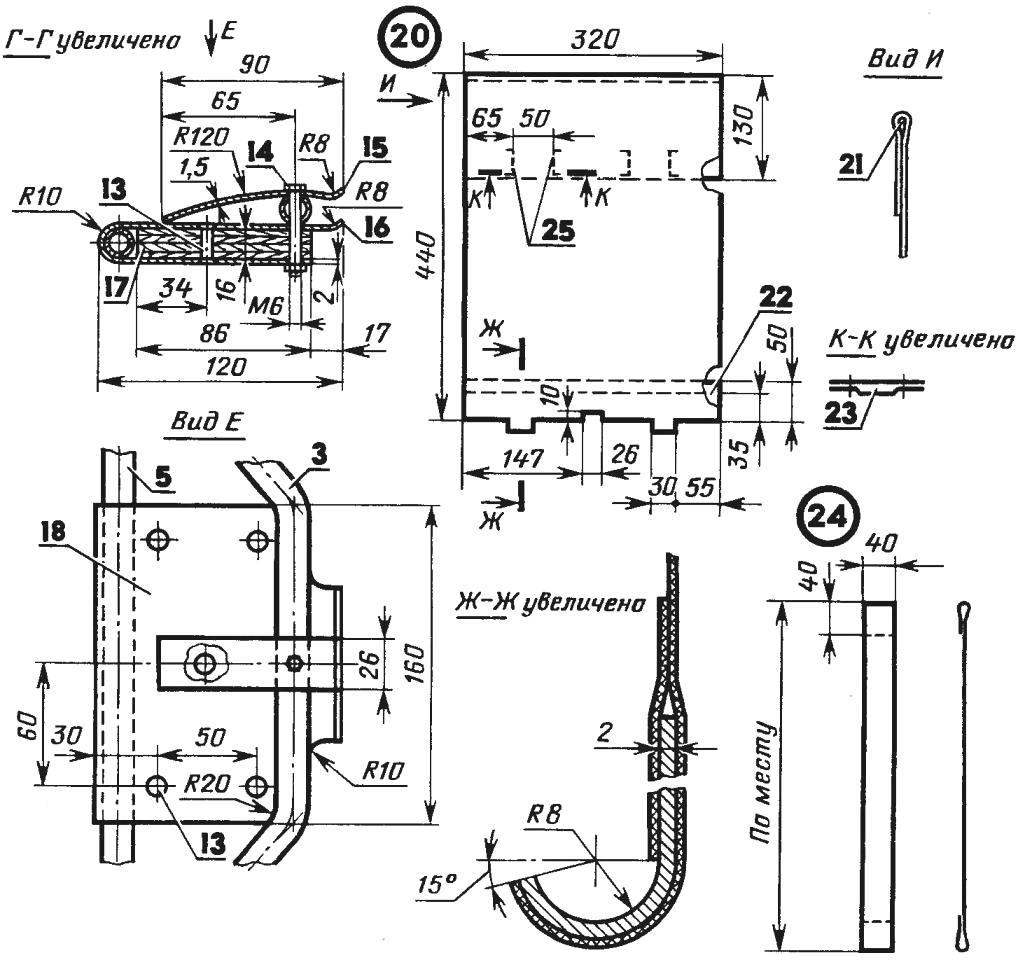 21 — pocket for the crossbar truck,

25 the seams of the opening.

Truck (Fig. 8) — improvised (except for the wheels on the stroller) because it serves not only for transportation of parts of the catamaran, but for the engine mounts. It is made of chromed steel tubes with a diameter 16×1,5 and 10×1 mm. Instead of the cargo area it is a powerful transom to which its clamp is attached the engine in position.

The transom is a package insert from plywood and aluminum edging, the United five rivets. One end of a transom mounted on the axis of the wheels, the other is attached to the lower bend of the frame (bolt M6). Part of the border goes beyond the dimensions of the liner and forms a cradle in which is placed the trolley handle when raspolirovki and its rotation around the axis of the crossbar. This is done in the preparation of truck for installation on the catamaran.

In addition, the truck has the bumper to protect the engine against water jets the movement of a catamaran. It is made of rubberized fabric. The upper edge of it folded, forming a pocket for the crossbar of the truck, glued and stitched by thread, but not completely: two places left openings for cargo straps. In the lower edge of the baffle glued dural insert with hooks.

The belts (three of them) made of rubberized fabric and stitched with capron threads. When assembling the truck one stays on the handle, the other two skipped through the openings of the bumper, and then along with it the upper ends are placed on the crossbar, and the lower one to the axis of the wheels.

Thus, the catamaran meets the specified requirements: it is structurally simple, easy (it easily takes one person), compact (takes up little space in the apartment and in the car), quickly assembled and disassembled.

Sequence Assembly the next. 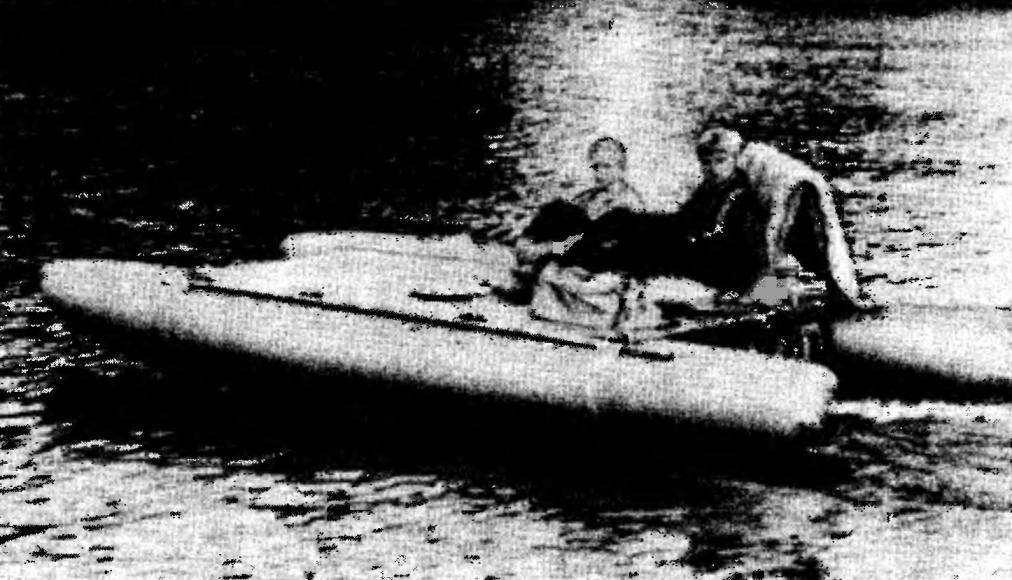 First, inflated the floats. Then going to the bridge: connect all of its elements, except the fore and aft cross beams, and the bridge is covered with a deck. Are pulled through the pockets of the transverse beam are screwed “lambs” first to the stringers and then to the Central beam. Now the deck is slightly stretched. Staples cling to the stringers, and the deck is permanently stretched so that it resembled batod. The bridge to the floats pulled by six wide tapes-bandages (Fig. 7), the ends of which are passed through slits home made aluminum holders. The bandages are cut from the same material as the shell floats.

Then released the clips on the cart, it folds, inserts the crossbar in the emphasis on the Central beam, and the clamps are placed on the transverse tube poop. The nuts on the terminals are tightened, and the truck is securely fastened to the bridge.

All catamaran assembled, you can take it to the beach. Already on the water, on comes the engine and to it is attached a five-gallon gas tank, soldered from sheet brass.