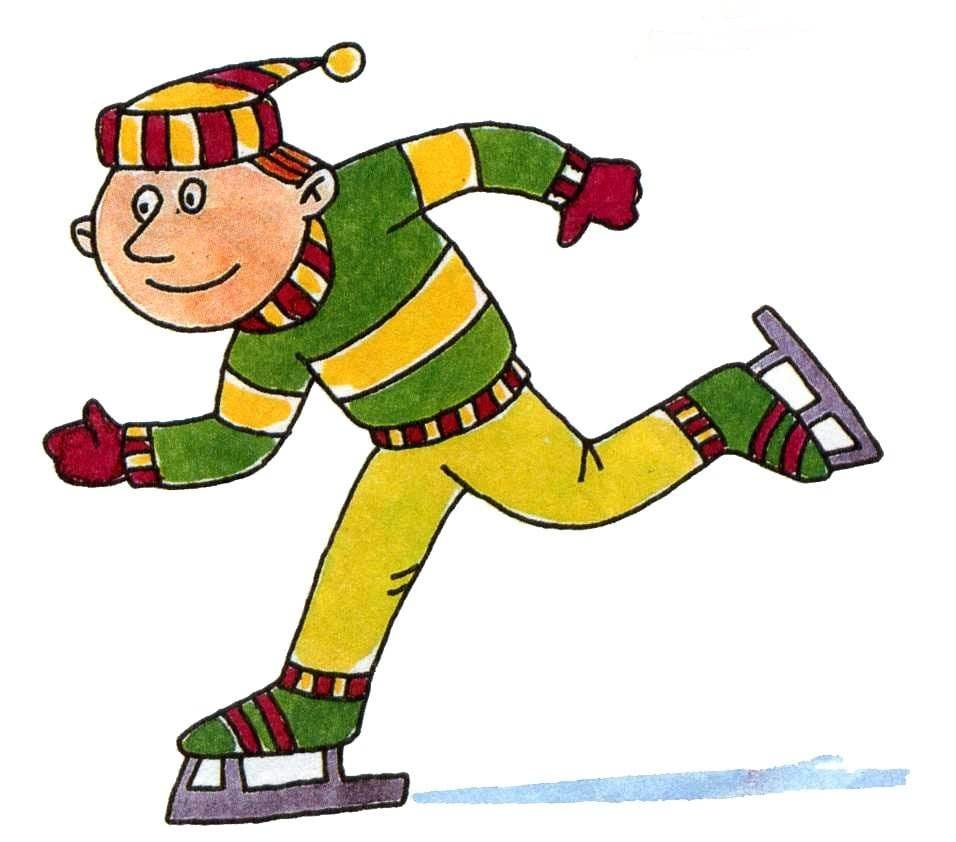 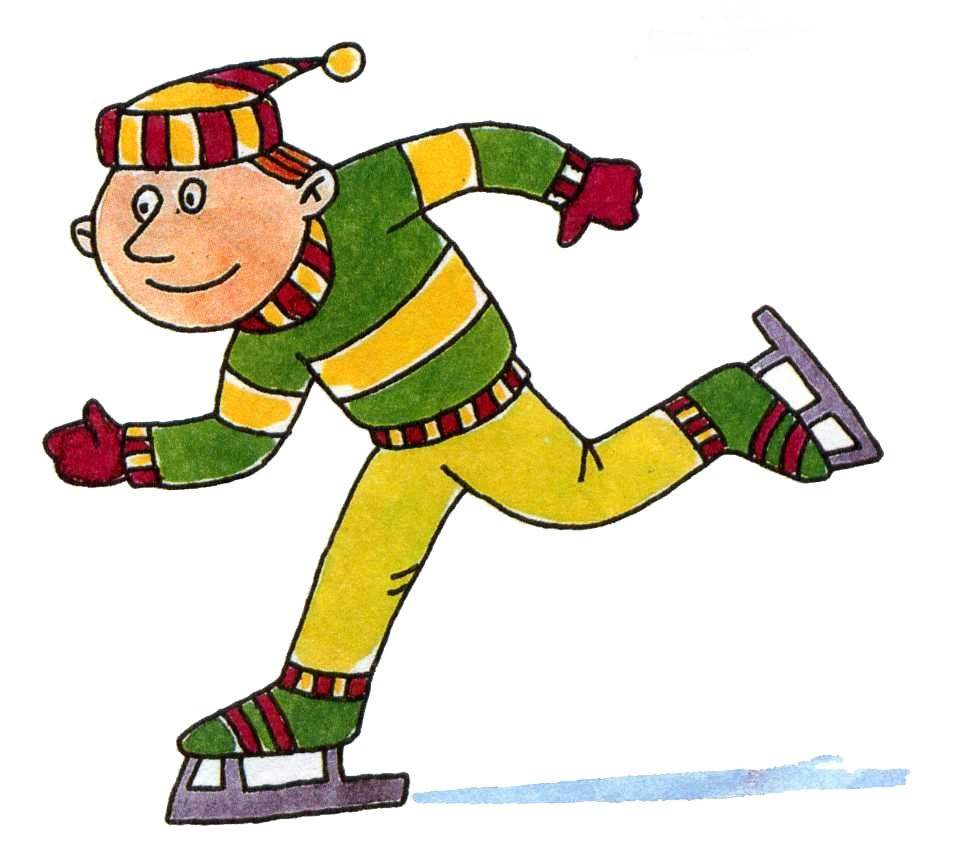 The tug skater that I have built and offer to readers, is characterized by simplicity, reliability and high maneuverability on the ice. It can be made of the most abundant materials and simple tool at home. This will require the old motorbike and some spare parts normal road bikes. The production is in one week even if you work only in the evenings.
The tug (see Fig.) is a single axle unit for the gear wheels driven in rotation bike engine type D-4 or D-5. He speeds up to 35 km/h with one skater.
The procedure of manufacturing the following.
From old bike frames cut part (Ref. A) it become a frame towing. Longer pipe end is inserted into the additional pipe with a diameter of 26 mm and a length of 500 mm, and in her Bicycle handlebar, which allows you to adjust the height of the handles. The handle the clutch and gas.
The next stage is the manufacture of gear propulsion (Ref. In). It is mounted on the base frame. The propeller has an axis of Ø 16 mm; impaled on her sleeve, acting as a slide bearing (before installing lubricated with grease, in the process of operation — avtol). The right side axle mounted spacer sleeve and the left side sprocket driven, taken from the rear wheel of the Bicycle. On both sides of the fixed axis of the large sprocket off the bike, with pre-cut rods of the pedals. 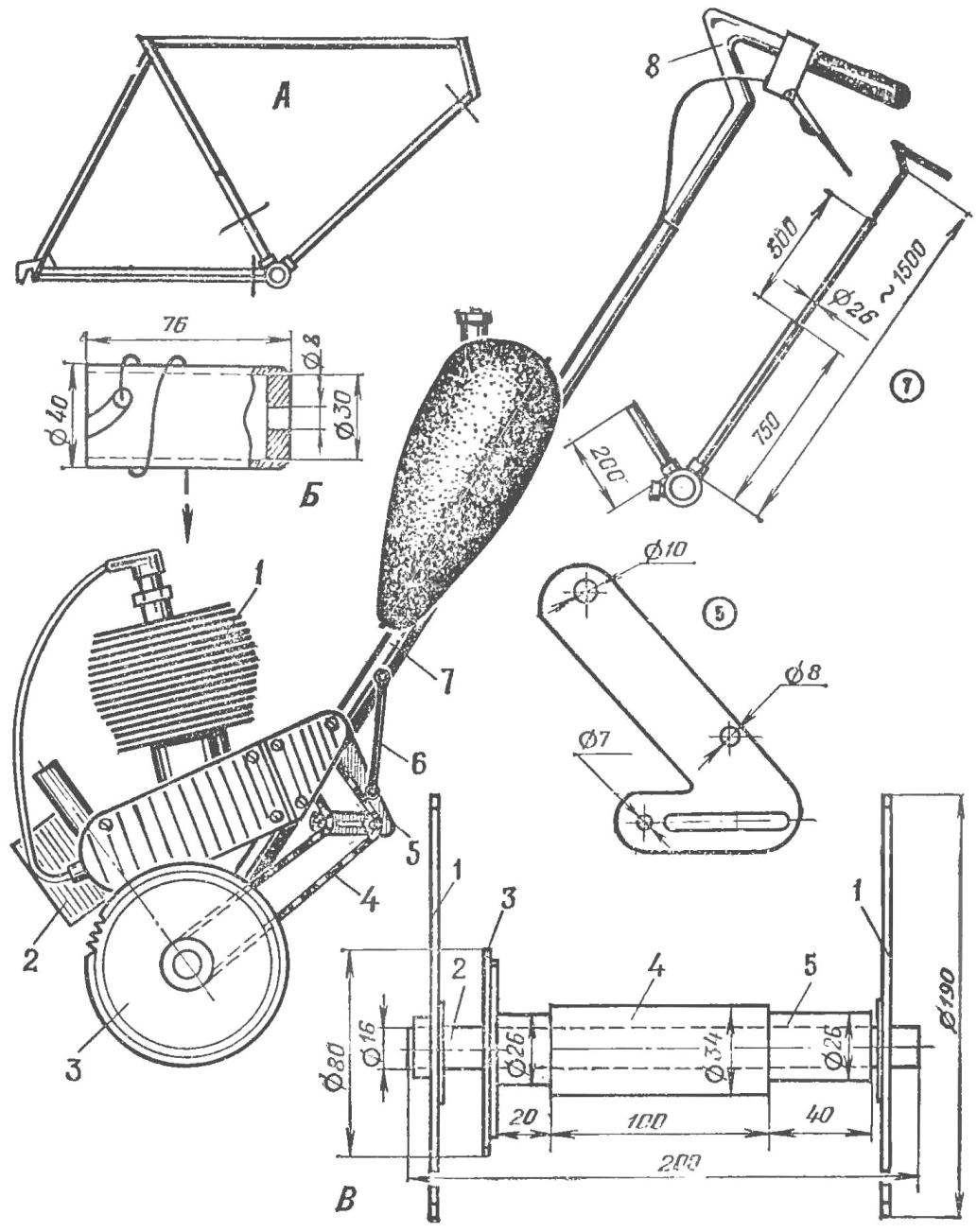 The scheme of the tug for the skater:
1 — Bicycle engine (D-4 or D-5), 2 — extra cargo, a 3 — gear engine, 4 — circuit, 5 — bracket, 6 — thrust, 7 — frame, 8 — steering wheel knobs: A diagram of “cut out” frame towing of velorama; — starting equipment; In — mover: 1 — the asterisk carriage bike (no rod), 2 — axis, 3 — counter shaft sprocket with spacer (sprocket rear wheel of a Bicycle), 4 — sleeve-Podshipnik, 5 — spacer.
After the installation of the engine on the frame mounted chain Adjuster. It can be used from motorbike (Ref. 5 on the main drawing), further drilling a hole Ø 7 mm, which spells out the basic asterisk; along the slot to move the second — with its help, you can pull-up circuit.
The tensioning device is simultaneously changing the direction of movement of the chain is attached with a screw through the hole of Ø10 mm to the motor housing and the rod to the frame. At first glance, it may seem unreliable, but, as practice shows, this unit works correctly.
The starter (POS. B) is a sleeve with a starting cord, which screw is attached to a small driving pinion of the crankshaft of the engine. Previously but the sleeve diameter drilled hole in the lid of a clutch for transmission cord.
And the latest: ahead of towing an extra load weighing 5-8 kg to increase the adhesion of subcats with the surface of the ice.