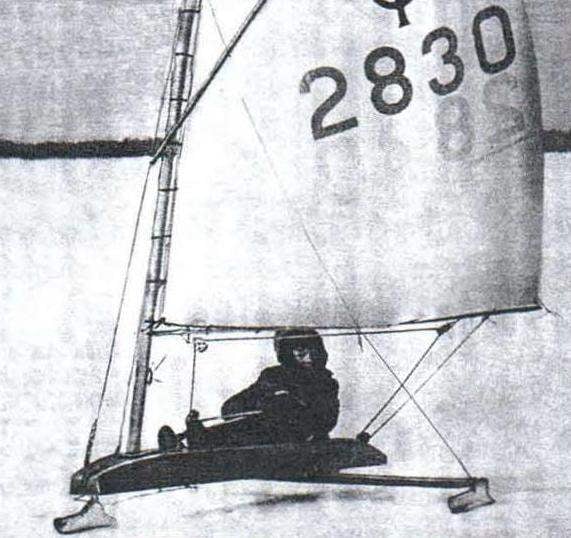 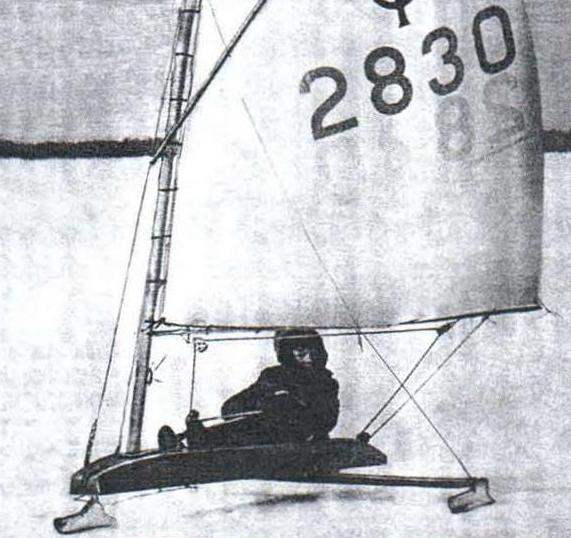 For living with a little bit of a big pond is always a great temptation to build something for the development of its open spaces. The boys excitedly knock together simple rafts who are older for a range of boats. And since such open spaces is constantly blowing winds, comes the dream of the sail. With the onset of the harsh cold of different types and sizes sailing ships are replaced by yachts competing in speed with the wind. Their arrow-shaped body resembles a race boat and the sail with a mast a miniature yacht. But the speed is incomparable due to the fact that the Buer moves on skates is soon flying over the ice, despite the fact that the wing only one. But what! Here everything is important: the fabric and form, and stitched, and as generally arranged.

The one who sees the Buer for the first time, will be conquered not only the beauty but also the complexity of its device, causing a doubt whether it is possible to repeat this miracle on their own.
To help those interested in creating such a device the Hungarian magazine”, Earmaster” offers a simplified version of glider available for self-production.
What is
If we consider comprehensively the main blocks of the device, we can distinguish three of them: a longitudinal panel with a mast in front and the seat rear; rear cross “wing” with the beam stiffness at the bottom and two skates there and steering lever rotary skate under the body panel (closer to the front). You can even add a simple braking device of the scraper type in the form of two tubular levers, hinged at the end of the case.
Each block has its components. So, on the panel in the front part of a metal Cup with a flange – here is inserted the mast. To him on both sides fit to the top of the casing, the two ribs of the wooden slats, which are a continuation of the sidewall of the U-shaped box seats. At the end of the box with support on the rear cross member is attached to the back of the seat and on the sides of the scraper levers brakes. In the place of installation of the box seat panel is attached to the panel “wing” bolts with smooth heads and wing nuts (bottom, on the sides of the beam stiffness) – this allows you to disassemble the design into an easy to transport package. 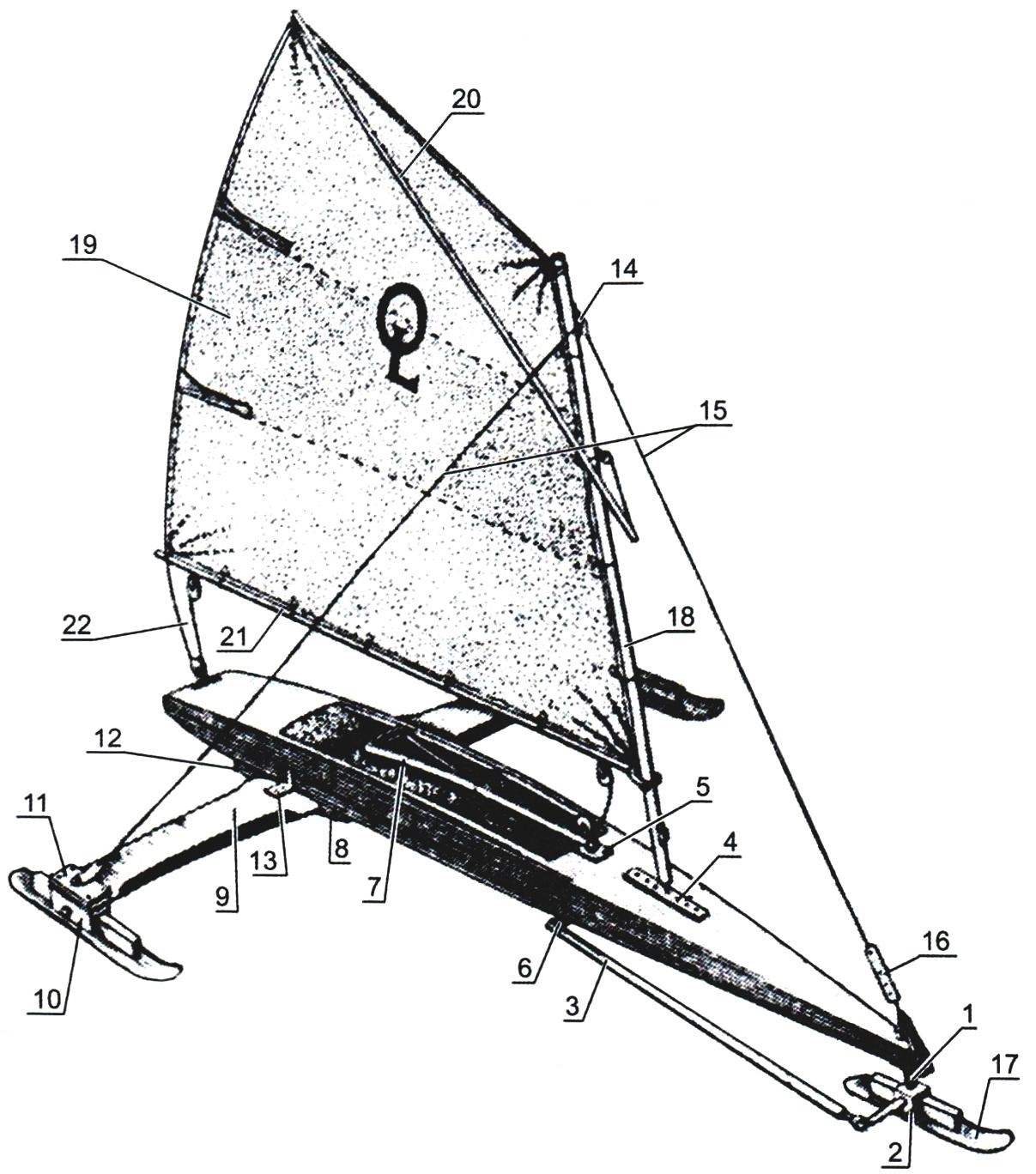 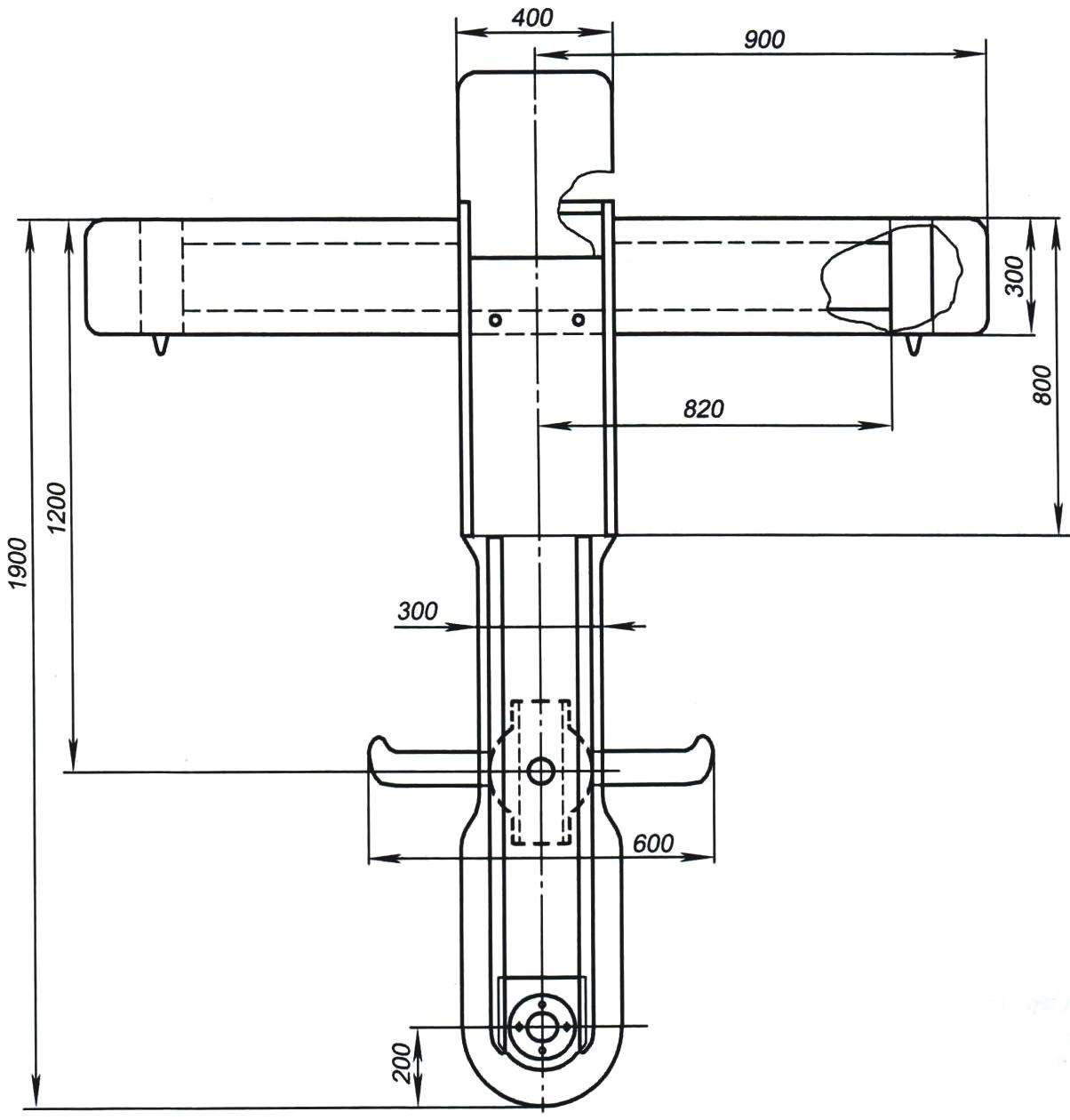 Layout Amateur Buer (in plan) and its basic dimensions 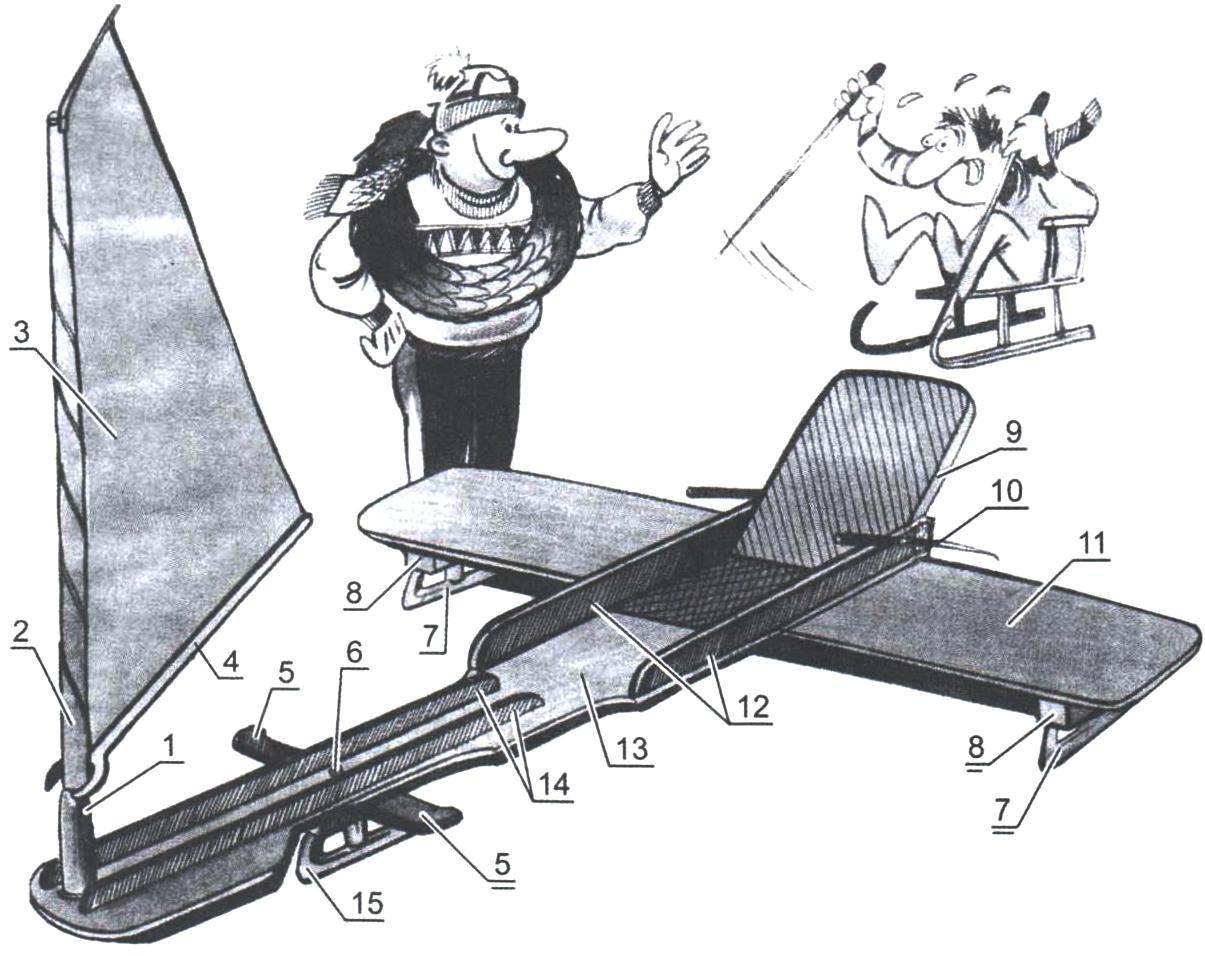 Amateur Buer:
1 — metal glass mast (steps); 2 mast; 3 — sail; 4 — boom; 5 — levers-pedal control panel; 6 – axis steering unit; 7 – lateral skates; 8 – beam of fastening of the skate; 9 – the seat back; 10-the lever of the scraper brakes; 11″wing”; 12-side box seats; 13-body panel glider; 14 – ribs of the hull; 15 – steering the horse with rail mount
“Wing” has a bottom I-beam in the form of bonded to it with screws Board -to make the structure more rigidity, given the almost six-foot wingspan “wings.” On its edges set of short wooden rods with attached skates.
The steering device is an Assembly of curved small panel with two levers on the sides (under the feet) and attached to it a bar with ridge. In the center of the Assembly is installed the axial bolt of such length that it passed through the slip plate, which plays the role of a sliding bearing, and the body panel. This swivel Buer provides the necessary maneuverability.
As sail can be used by any small prepared (for example, from a windsurfer or a small yacht-type “Cadet”) or made specially according to the attached figure 6 sample.
Materials
For production yachts do not need a particularly scarce materials or special tools.
On the body panel and wings and other flat items will fit a 12 mm plywood or furniture Board and particle Board (although the latest design will turn out too heavy). On the ribs of the hull and the seat box and the back Board thickness 15 – 20 mm (the same on the beam stiffness “wing”). For the mast will fit the handle of a shovel or other garden tool.
As the fastener has a bolt-M8 – M10 and conventional screws of suitable length. Of tools only need a hacksaw with a planer, drill, screwdriver, and clamp.
Assembly
Two main nodes – the body and the “wing” – first collected separately.
On the top panel of the casing successively fasten screws mast glass, and using plug-in round thorns and glue (carpenter’s, PVA) – ribs and seat box. Back with a slight tilt back is inserted with its side cut outs in the seat box and at the prepared drill holes secured with screws at the bottom. 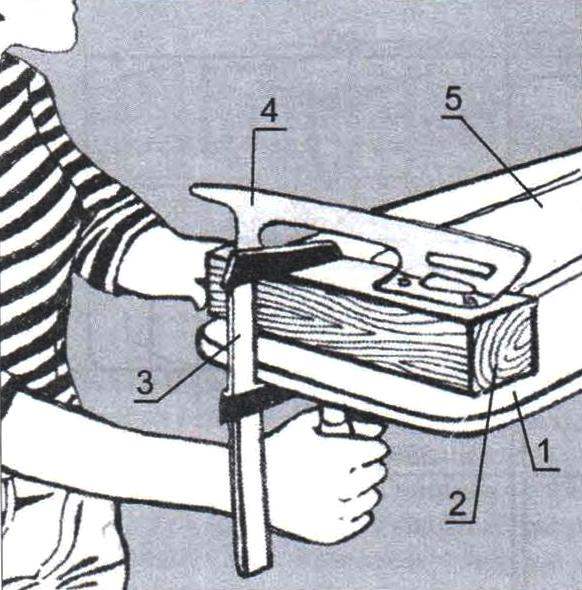 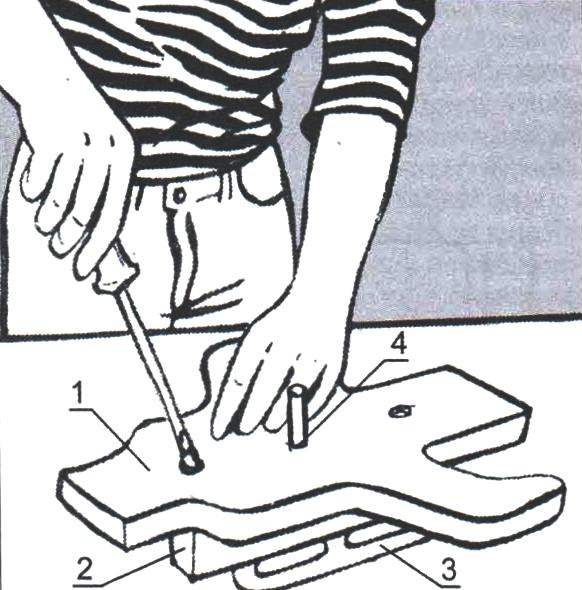 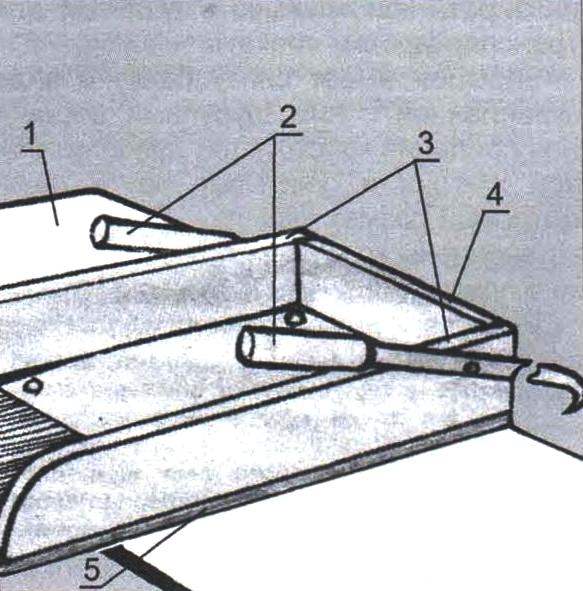 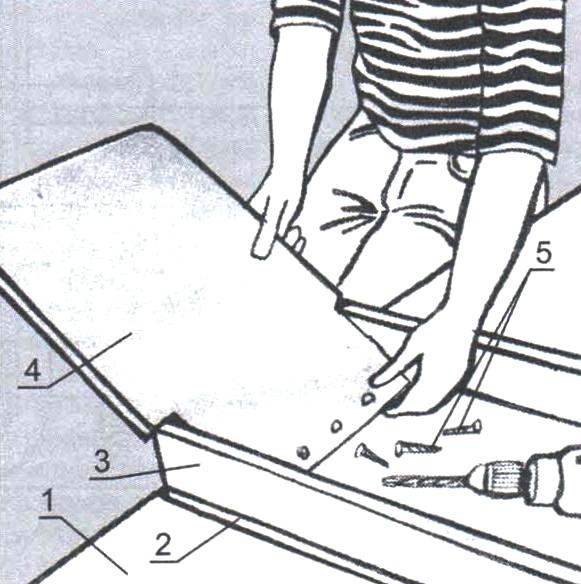 Installing the seat back:
1 – panel “wing”; 2 – panel Bura; Z – seat box; 4 – seat; 5 – screws
In the area of the ribs at panel edges made cutouts for the legs to control the steering hub with the guide ridge. This site is built and installed on the case separately. First, the skate is attached to the bar, on top of which is attached lever screws on the panel (it can optionally be mounted a plastic plate, which plays the role of a sliding bearing). In the prepared hole in the middle node is fixed a metal rod (axle), the top of which opens above the panel through the corresponding hole in it.
The “wing” less extra parts, so building it practically means the end of the process of making ice boats. Here are possible options for the sequence of operations, but it is better to first install the I-beam stiffener (on the screws with glue). Then it ends – sticks, and ice skates (or they are pre-attached to the bars, and then together to the bottom surface of the “wing”).
Sample cutting and basic dimensions sail
Completed the Assembly of a glider installation on the sides of the box seats of the two scraper levers brakes. They are any hard to bend metal tubes with rubber grips; the opposite ends flattened and bent downward to form a braking scraper. The holes for the hinge mount levers are adjusted so that the scraper end of the lever to freely reach the surface of the ice.
Finish
All wooden parts after processing an emery paper can be painted with oil paint vivid colors of red or orange, so the unit was visible from afar (for safety purposes to others).
Metal parts are better to cover with nitroenamel black or brown, which better corresponded to the material itself.
Remains to install a mast with a sail and start to gain control of the sail and the tail node of the Buer. Tailwind!