Our family vehicle — a three-wheeled velotandem “the Vagabond” — designed by me for tours. From the same konstruktsii it is distinguished by the absence of any irreversible modifications to the basic bike on the basis of which created velotandem; ease of fabrication of additional parts and components which couple to the standard model turns into a three-wheeled trailer, as well as high reliability “Tramp” tested tough operation on the roads of Russia.
Like all tandems, our also has a smaller in comparison with a pair of conventional bicycles CX — the drag coefficient and, as a consequence, a lower sensitivity to the counter air flow. All of this allows easily for 4…5 hours to maintain a cruising speed of about 20 km/h (7 km/h uphill and 80 km/h on Sunnah). To resume movement, as experience has shown, it only takes two or three hours of rest, although the crew does not have high athletic qualities.
In the design of the “Bums” has the ability to quickly (maximum 15 seconds!) disassembly and sborni tandem, which is extremely convenient when transporting beltranena in public transport, on crossings and during storage.
It all started with the fact that I bought a “Kama” — a convenient and reliable folding bike, which has mastered the skills of Cycling, and then began to make fairly regular long-distance flights. Then our family got a second bike, and here it began to be thought about a double machine, which gradually formed into a kind of project for yourself.
The work on creation of “Bums” ran parallel with the operation of the bike, not disturbing her. On the contrary, our experience on the highway, actively helped in the formation of ideas.
The scheme of connecting two bicycles in one rather simple and resembles that used in city buses-accordions or truck trailers. In essence, this is a joint with two degrees of freedom. Creating it was made easier by the fact that the horizontal coupling portion used steering column driven bike. True, at first I was confused by the fact that it is not vertical, but sloped back at an angle of 20°. Theorize about the effect of this angle on the behavior of an articulated three-wheeled machine would be a long time, but the final decision could only come as a result of practical verification of the efficiency of such a node. It turned out that the handling of the Bicycle-trailer with such a hinge has its own characteristics, but not so significant, and to be accustomed to them possible in the first visit.
I must say that the layout is similar to the “rolling stone”, I’ve ever found on the pages of magazines and in the television show “you can”. However, the imperfection of these machines has prompted the search for new technical solutions, which resulted in our version. 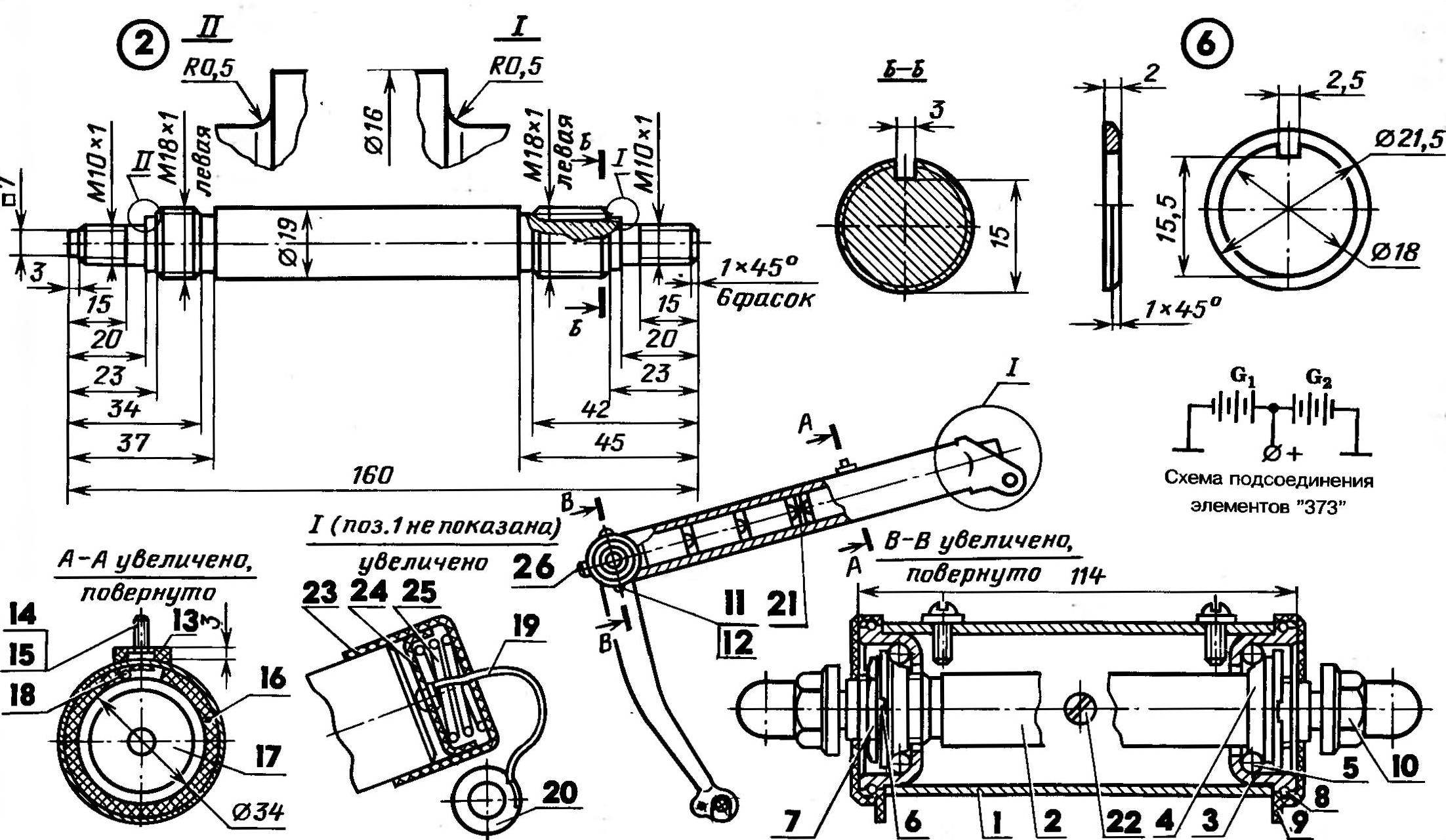 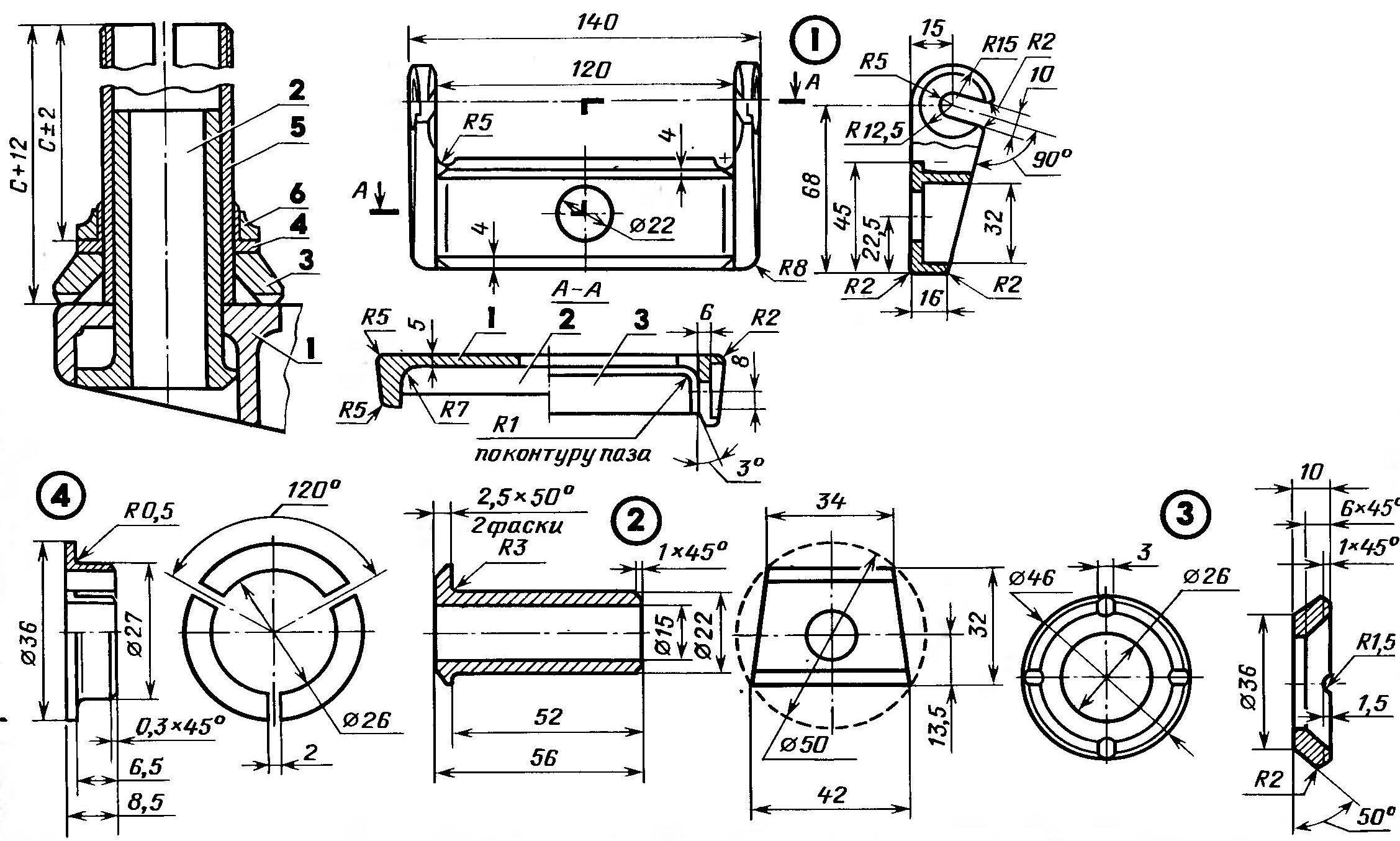 Fig. 4. Connecting plug:
1 — bracket, 2 — a safety sleeve 3 — bearing washer, 4 — liner, 5 — shaft hinge coupling (tube front fork of a Bicycle “Kama”), 6 — bearing cone (cone of the lower bearing of the steering column of a Bicycle “Kama”). Size “S” pre-retrofit measured on the fork before removing the cone.
And another thing: I regularly meet with those who would like to build similar to my tandem car, but don’t do it, fearing for its apparent lack of rigidity of the composite beltranena, as well as for the stability of its movement. However, long-term operation “the Tramp” showed that these parameters are quite satisfactory.
I would like to warn those who create this kind of machine is trying to follow the line of least resistance, placing the hinge on a serial bike trunk. Such a decision is more than doubtful, and it is unlikely thus, it is possible to create a viable and safe car.
Offer velosipedista sufficiently detailed drawings of additional equipment, which a couple of bikes type “Kama” can easily turn into a three-wheeled veloton-dem. I hope that this idea will be of interest to industry, which could start serial production of such coupling devices.
When creating beltranena keep in mind that the figure marks structural materials are not undeniable — I did parts of those materials that is in the moment at hand. Note also that the nodes of the “Bums” on 60% consist of standard Cycling items that can be purchased in stores or ve-moremonth workshops.
As already mentioned, the basis of ilatraia is the docking module, consisting of a tube frame, a pair of racks (modified feathers of the front fork of a Bicycle “Kama”), carriage, bracket and connecting plugs. All of these elements are shown in the drawings and do not seem to require special design and technological review.
As additional equipment for beltranena can recommend a small enclosed trunk in which it is convenient to arrange the first-aid kit, food emergency reserves and a water bottle with a capacity of 1 L. It serves also as an additional child seat.
Igor PICHUGIN, Orenburg