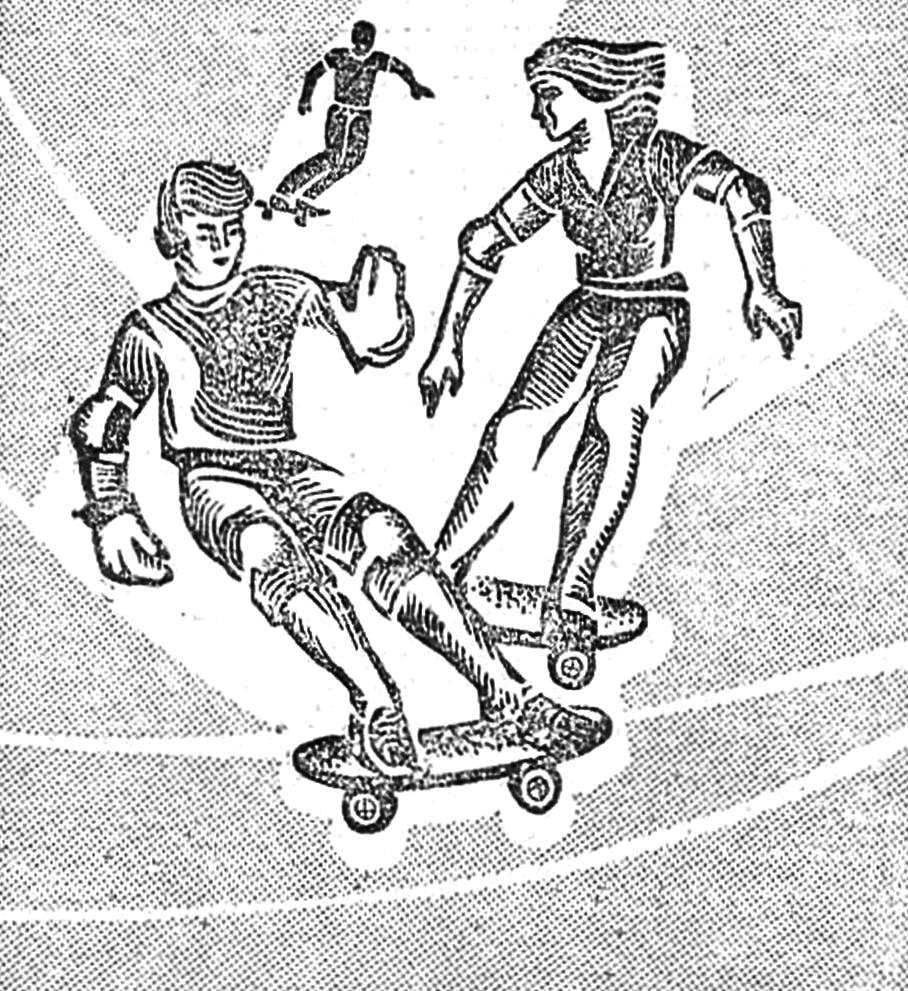 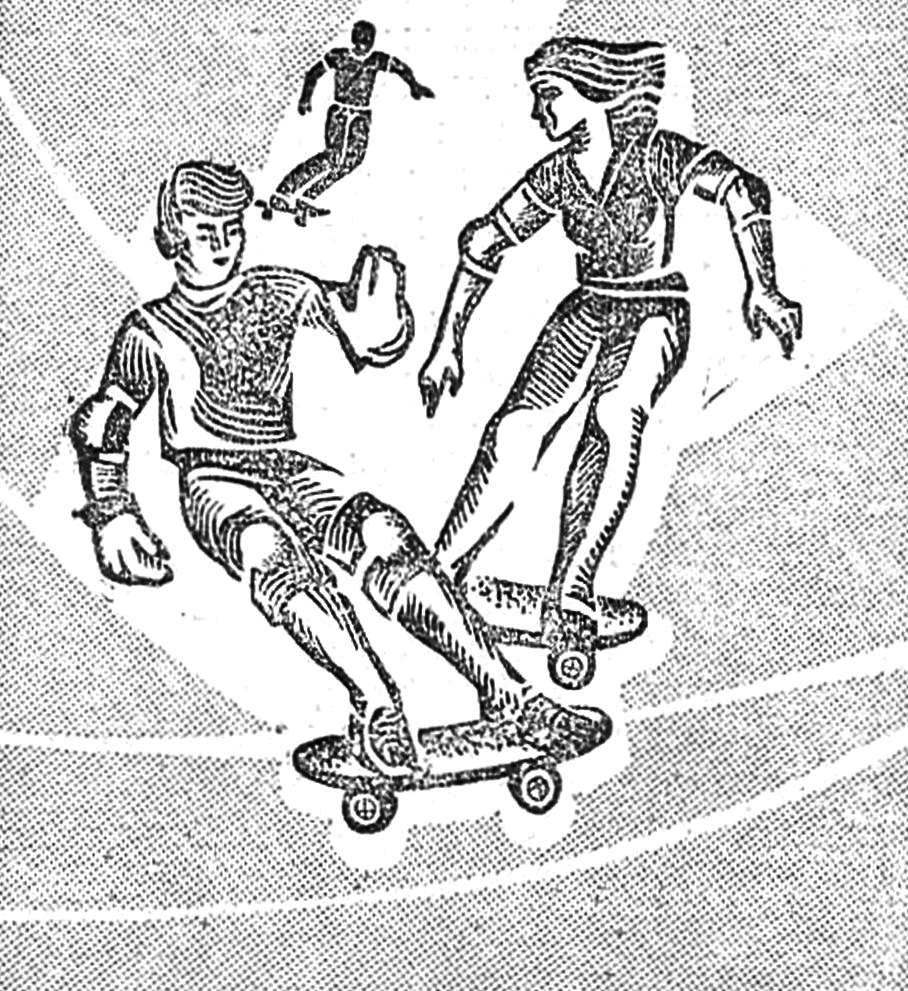 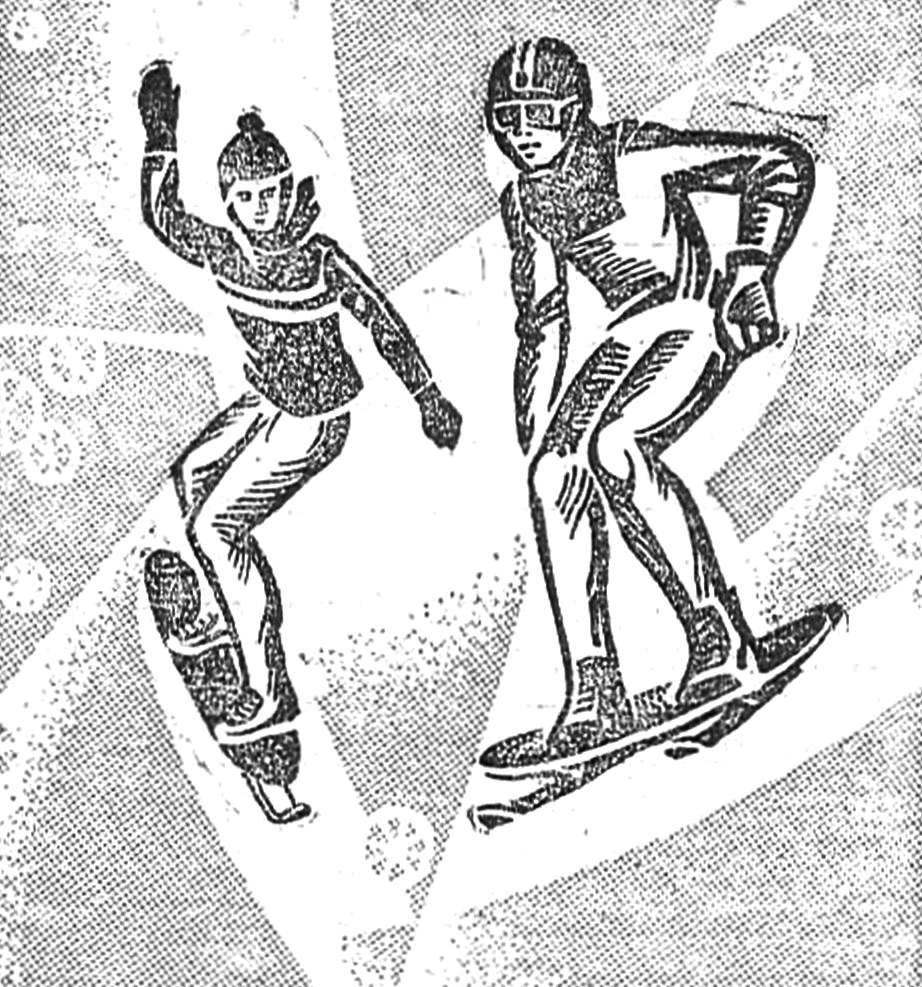 Now more and more can be found on the streets guys, balancing on the rolling boards. They are not only confident of their own on descents: even the most adept going up a hill, easily doing complicated pirouettes ka slalom tracks, sometimes demonstrate a downright acrobatic stunts. Popular among young people, the shell is called a skateboard, occupation — rolling. Movement standing on a roller Board are very similar to those performed by the skier passing through the gates on the descent, or the surfer, especially when you tack. Indeed, the skateboard was created as a simulator for the skier, but soon became widespread as an independent apparatus. Rolling becomes a sport: many fans began to unite in section at stadiums, various sports clubs. According to the head of laboratory all-Union scientific research Institute of physical culture, doctor of medical Sciences V. V. Matte, skateboarding develops agility, reaction speed, coordination of movements.
Unfortunately, industrial production of skateboards is limited and can buy it in the store difficult. But out there — manufacturing the Board yourself! The proposed design developed by the engineer Yu. Zotov and N. By shershakova. They are both passionate about and also a slalom, so I designed a winter version of the shell — put it on the ski.
Considering the scheme of the skateboard, someone will obviously ask the question: “Why the fuss? Is not it easier to attach to the Board a pair of wheels front and back, and be done with it, roll yourself to health from the hill”. Right to direct descent of this enough.
But the implementation of the various turns, loops, acceleration and deceleration of the movement is due to the original suspension design of the wheels. The wheelset on the projectile have the ability to shift — “swing” across the Board: their axes to install with some tilt — usually at an angle 25-15°. Less than the angle, the greater the turning radius of the skateboard, the wider and smoother the arc, which he describes in the movement; on the contrary, even a small inclination of the Board will cause the projectile to abruptly change direction, if the angle is close to the maximum. The role of the adjusting device and at the same time shock absorbers do here rubber washers. “Hard” suspension when you tightened the washers better for the novice athlete: she “fix” many of his mismanagement. “Soft” required skillful master skate will be sensitive to respond to the slightest movement. 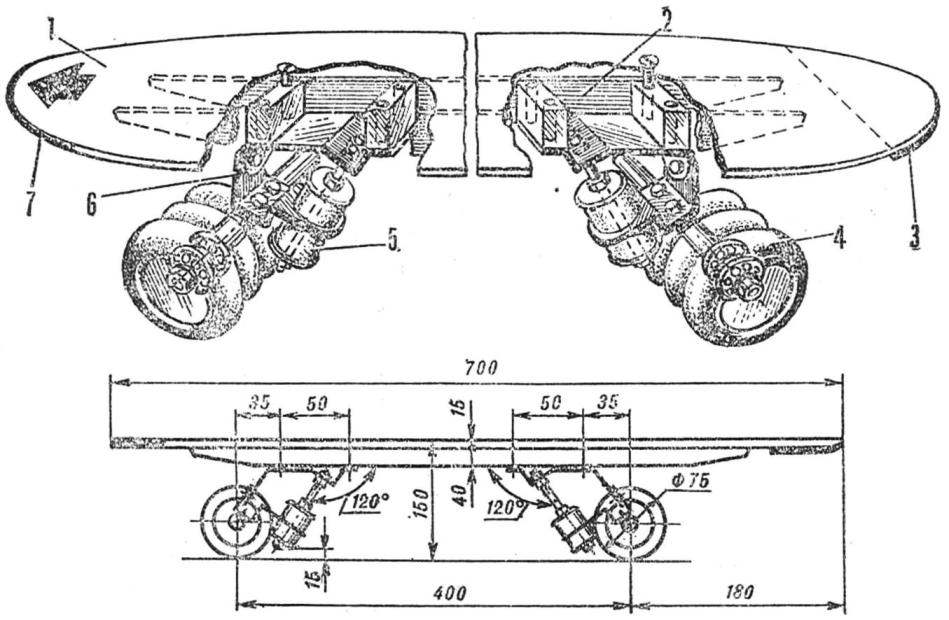 Fig. 2. Platform (bottom view):
1, 7 — GRP, 2 — slot for carrying, 3 — rib, 4 — feed lugs suspension, 5 — brake rubber grip, 6 — plywood.
MANUFACTURER of SKATE start with the Board — supporting platform. We recommend you make it a combination: plywood reinforced fiberglass with a decorative coating. Pre-apply a desired contour on a sheet of drawing paper. Skate length 700 mm, width 150 mm., Overlap the stencil PA a sheet of plywood with a thickness of 10-12 mm and saw out the blank, not especially trying to round the corners; then in the grip of the edges with a rasp or a file with a large notch. If the platform is going from a thin plywood “layers” it is better to glue with epoxy glue, pressing the small screws or nails.
A decorative cover made using the matrix of Plexiglas; previously on it serverlimit “cones” (3-5 mm drill bit d) staggered 10-15 mm and coated with epoxy (these materials are not desirous) hardener and mixed it with the dye. As the latter can be used, for example, oil paint. After partial polymerization of the layer is put on it fiberglass and rolled down firmly with a roller. To withstand the day, carefully separated the resulting decorative coating. Using the same epoxy, glue it on top of the platform, and the bottom is fiberglass in one or two layers.
Along the bottom put two ribs (made of plywood, wood strips) with a height of 40 mm and a thickness of 4 mm, and between them two pairs of lugs (size 20x40x40 mm) for fixing the suspensions of the wheels.
WHEELSET. The roller wheels are machined from aluminum, PCB. Axis — metal, complex configuration. At each end there is a thread M8, in the middle of the drilled through holes with a diameter of over 6.5 mm bolt that connects the pair of wheels with suspension. When you build the steam roller, laid the seals of leather or microporous rubber with a thickness of 4 mm; they protect the bearings from dust and dirt. When zapressovke bearings between them is laid spacer spacer thickness of 10.5 mm and max d 18 mm. Before end nuts on the axle put on the spring washer. The whole internal cavity of the roller becomes clogged with grease of type “Litol”.
As a tire applied carpal expanders, available in sports stores: rubber with outer ring d 75 mm. Kit skateboard — 12 PCs. They come in different hardness: for learning should be the softest, high-speed projectiles require more hard tyres.
SUSPENSION front and rear wheel pairs are the same. Critical parts: brackets, brackets and shock absorbers. Billets first serve two metal plates of 3 mm thickness and 40 mm width.
Mark items on a worksheet (each in two copies), cut them with shears, fold in pairs and clamped in a vise, grind the edges drachevym, then personal file, clear from burrs, sharp edges blunted. You then drill holes for the mounting pints and coupling bolts. In the console there is also an oval hole under the axis of the shock — make that two drilling nearby and saw a file “jumper” between them. Bend the workpiece as shown in figure 3. 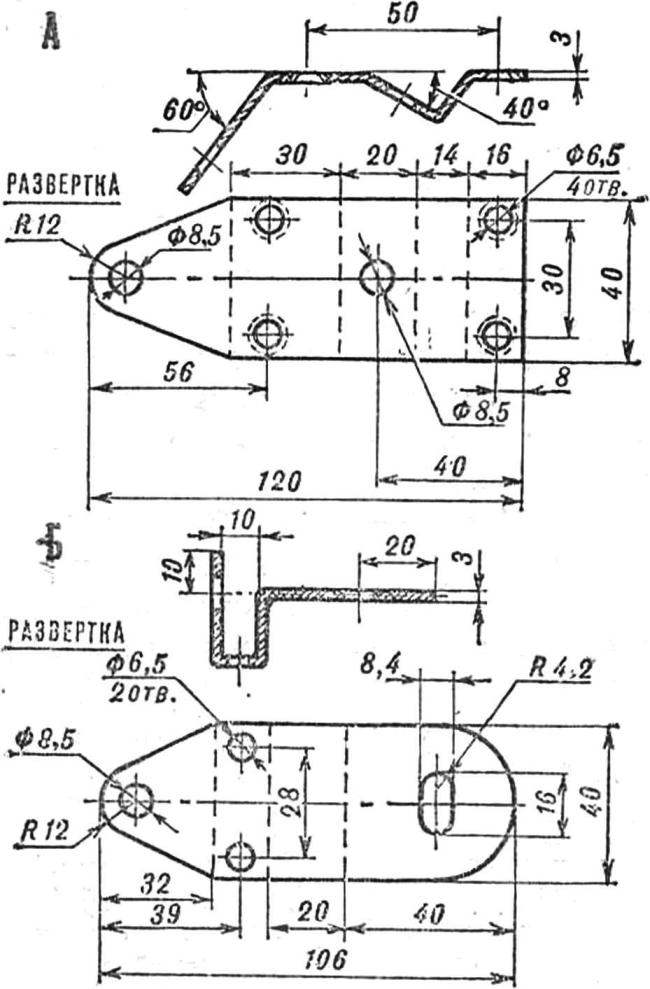 R and S. 3. Suspension components and their preparation:
A — clamp B — a console. 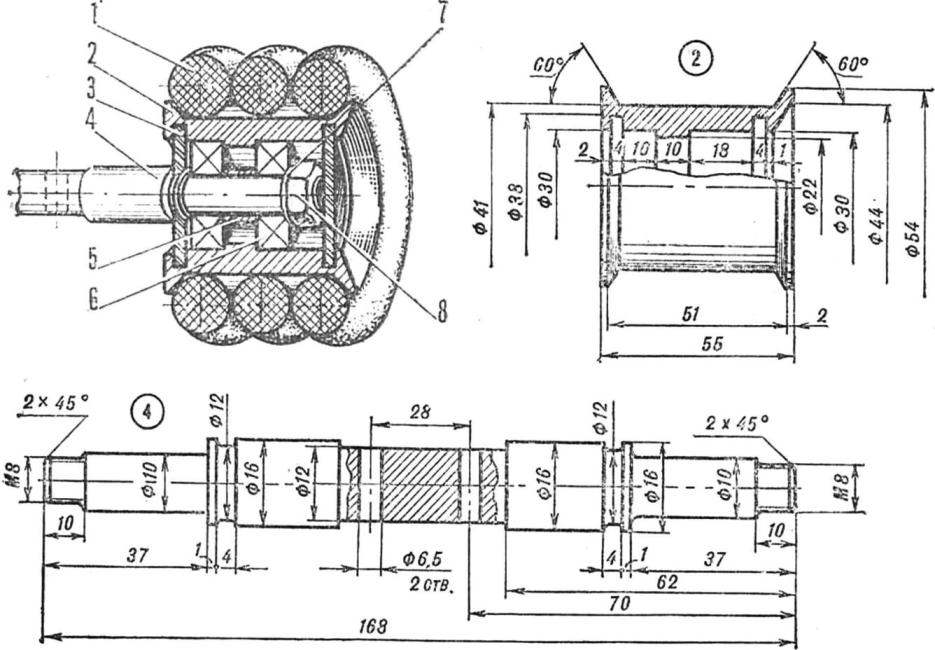 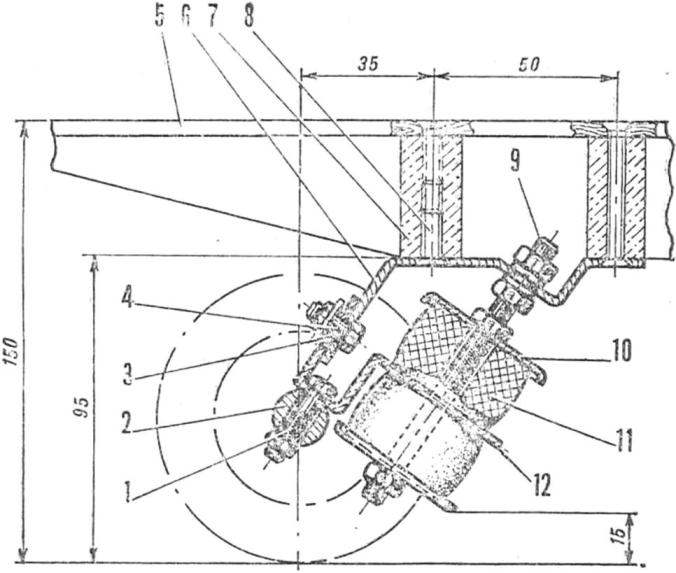 R and S. 5. Suspension wheelset:
1 — bolt pair M8 axis, 2 — axis pair, 3 — sleeve – spacer, 4 — bolt M8 connector, 5 — platform 6 — clamp 7 — lug, 8 — fastening screw, 9 — stud isolator M8, 10 — Cup washer, 11 — rubber bushing, 12 — console.
The shock absorbers consist of rubber bushings which are clamped between the Belleville washers; they are then assembled on the stud M8, length 90 mm Sleeve height of 30 mm are cut from the vacuum hose d 25-30 mm and can be bead — put a few washers thick rubber (for example, old cameras heavy vehicles).
During Assembly of the suspension bracket and the console are connected with M8 bolts; the pair of wheels installed on the M6 bolts.
SKIING TECHNIQUE. The design of the skateboard is that the Board automatically rotates in the direction of the slope: the steeper, the smaller the turning radius. So they manage.
Stand on the platform along it, feet shoulder width apart, feet over the rollers. Try to put pressure socks on the edge — rollers closer together, push heels — disperse. The first situation would correspond to a rotation in the direction of socks, a second ago “behind the back”. Stay free, do not strain the feet, knees slightly bend, hands for balance place in the side. Head lift: do not look at your feet and on your Board, it is better to closely follow the road. At first not much gain, try to make a wide smooth arc. Climbing up the hill, set on top of it, skate to go down not straight, and across the slope. Be careful: one wrong move, and the shell will immediately pop out from under his feet. 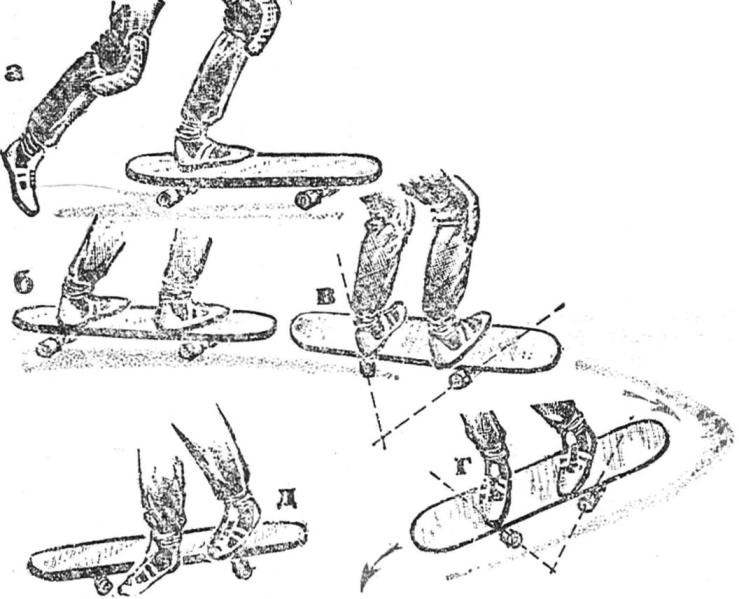 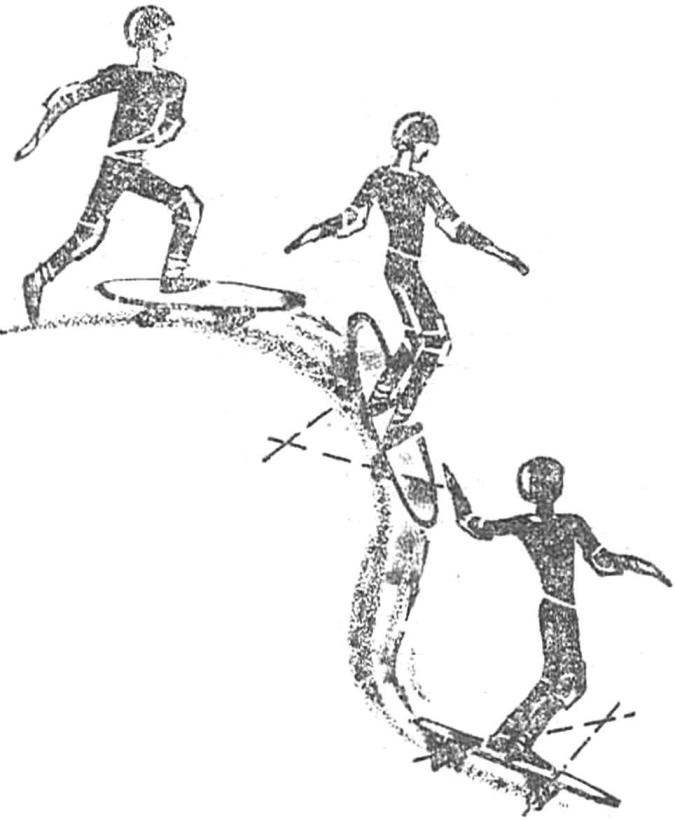 R and S. 7. The movement of the “snake”.
When riding always use a protective helmet and knee and elbow pads. You can make them short-circuit the old children’s rubber balls, and the inside spread, for example, foam rubber. However, take not only themselves but also their Board. Not to split her in case of accidental hitting the unexpected obstacle, put on the bow of thick rubber — the beak. Take a brake: at the back, attach the rubber washer at a stop, shifting the weight of the body back, “lean” it on the road.
THE RULES OF THE ROAD. They are a must for anyone who expects to deal with rolling without injuries — friends and foes:
— it is strictly forbidden to ride on the carriageway of streets, highways, use sidewalks and pedestrian paths;
— choose a road of sufficient width with a slope corresponding to your skills;
— not too accelerate, control the speed, do not rely on their agility;
— exercise extreme caution, particularly on bends, riding on the wet asphalt or sprinkled with sand;
— jump with the skateboard forward.
WINTER ROLLING. If the snow covered the ground, do not worry: put it on the skateboard instead of the rollers a small ski!
It can be end-of-century downhill skiing, cross country, kids: they need to make a couple of rolling a length of 400 mm, cut backs. By defining their center of gravity, attach the in clamp (made of metal strip with thickness of 4 and 60 mm in width) at an angle corresponding to the inclination of the suspension. To the last M6 bolt engages the upper lug of the bracket. Along the bottom of the skis (except her sock) is placed in the middle area — the keel — NZ duralumin 20×20 mm epoxy glue and screws, and the top — leg strap with a width of 20-30 mm. 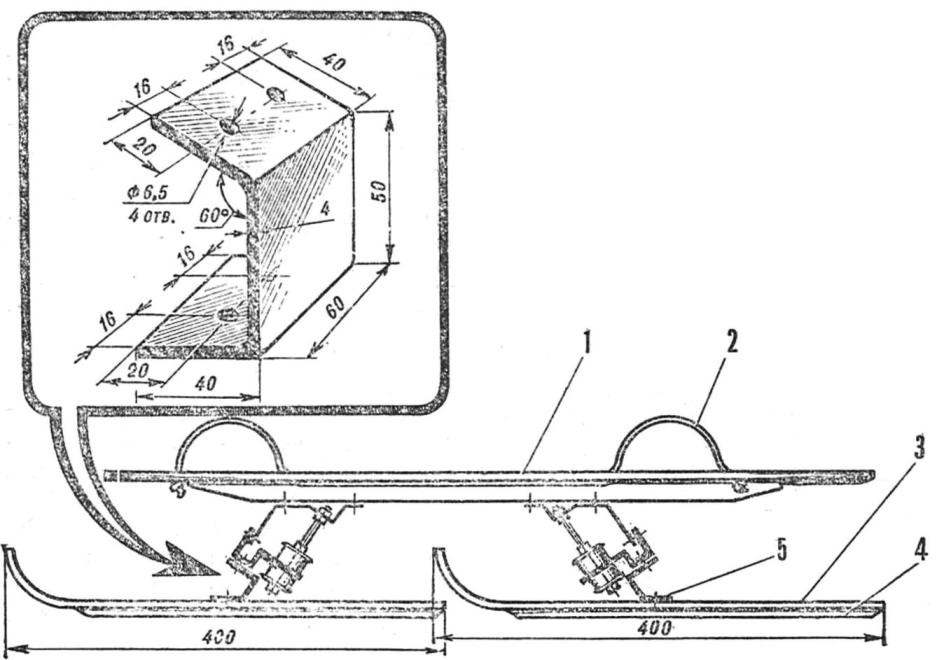 R and p. 8. The winter version of skateboard:
1 — platform 2 — loop belt, 3 — ski 4 — keel skis, 5 — “winter” staple pendants.
Winter rolling is practically no different from summer riding. The edges and keel don’t allow the skis to slide from the slope, and belts provide an opportunity to confidently stand on a skateboard.
Yu. a. ZOTOV, N. SHERSHAKOV