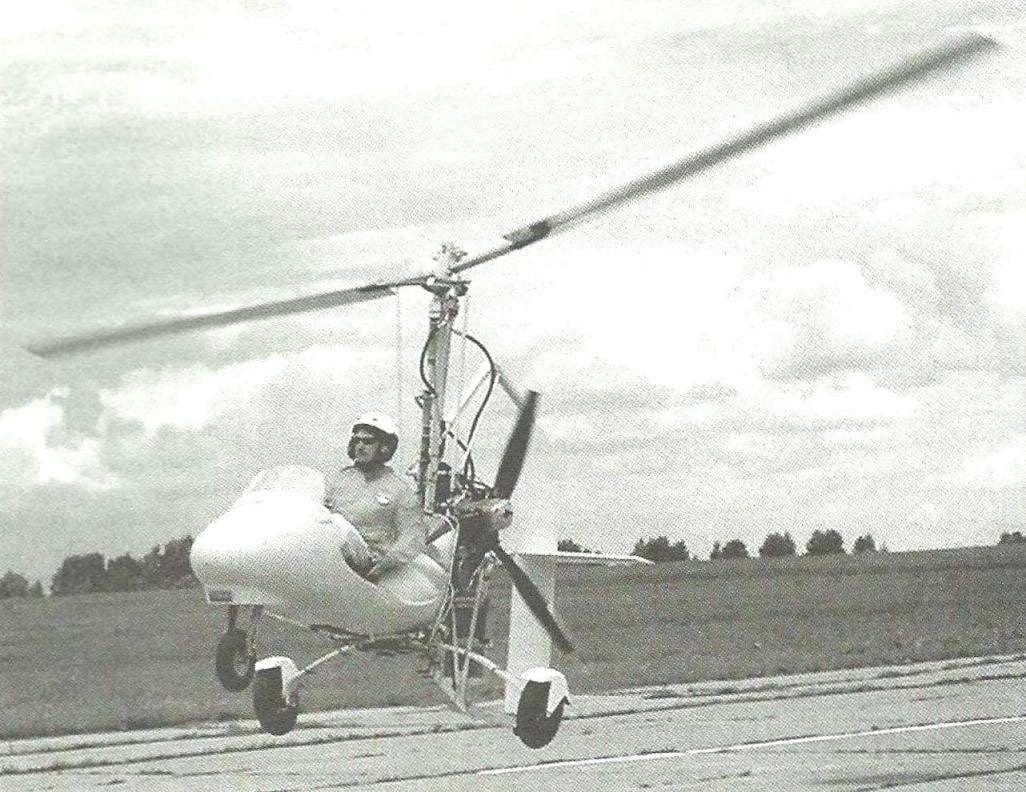 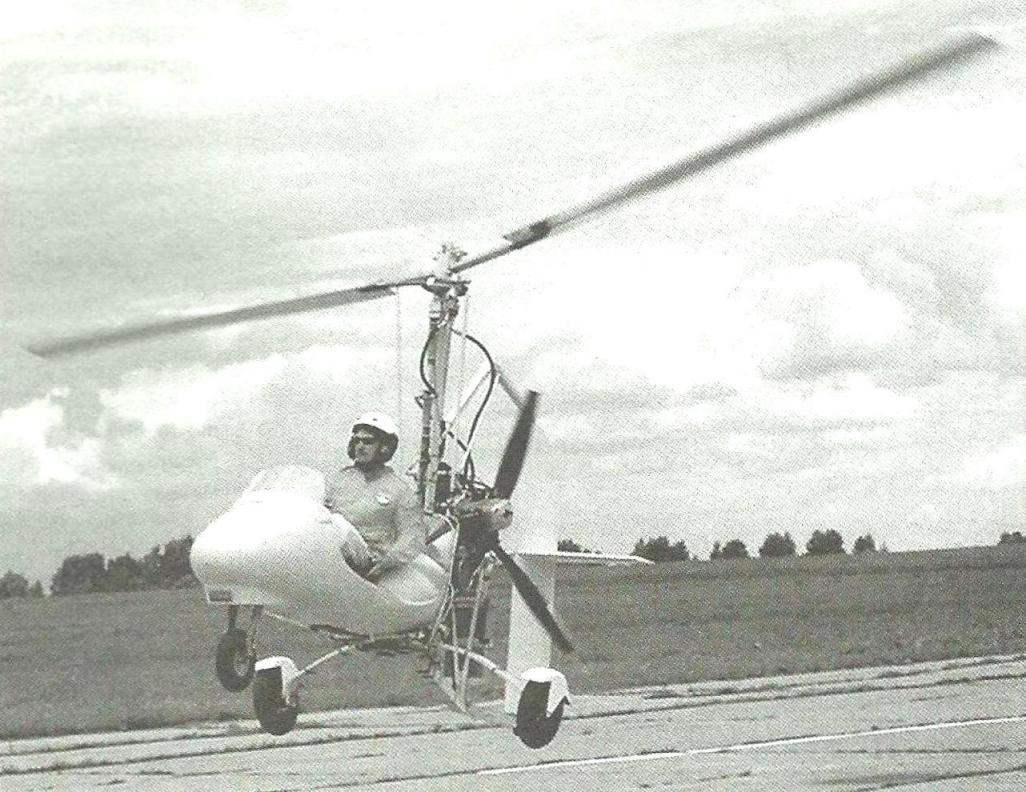 It is no exaggeration to say that the main airframe-the autogyro is the rotor. From the correctness of the profile, from weight, precision, alignment and strength depend on the performance of the gyro. However, non-motorized vehicle on tow behind the car rises only 20 – 30 m. But the flight at this altitude requires mandatory compliance with all previously stated conditions.

The blade (Fig. 1) consists of the chief, perceiving the load element of the spar, ribs (Fig. 2), the spaces between which are filled with plates of foam, and the trailing edge, made from straight grained pine slats. All these parts of the blade are glued together with synthetic resin and after proper profiling pasted with fiberglass to provide additional strength and integrity.
Material for blade: aircraft plywood thickness of 1 mm, glass thickness 0.3 mm and 0.1 mm, epoxy resin ED-5 and foam PS-1. Resin is plasticized with dibutyl phthalate in an amount of 10 – 15%. The hardener is a polyethylene polyamine (10%).
Fabrication of the spar, the Assembly of the blades and their subsequent processing is done on the slipway, which must be sufficiently rigid and have a straight horizontal surface, and one of the vertical edges (straightness is ensured by gouging under the line of the curved type, not less than 1 m in length).
The frame (Fig. 3) make dry boards. To a vertical longitudinal edge (straightness where provided) at the time of Assembly and gluing of the spar are attached with screws, metal mounting plate at a distance of 400-500 mm from each other. The upper edge they need to rise above the horizontal plane at 22 — 22.5 mm. 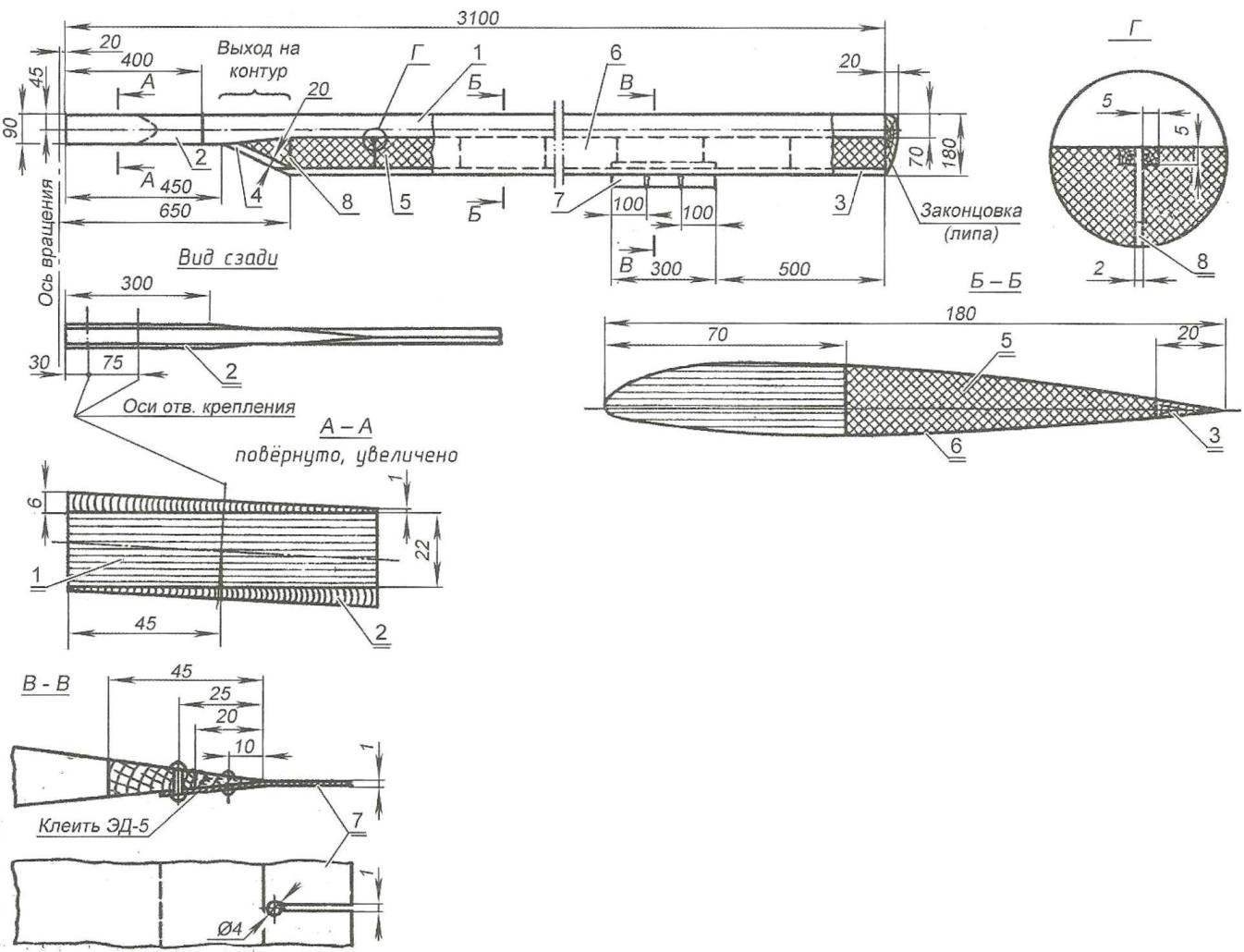 Of the rotor blade (propeller) autogyro 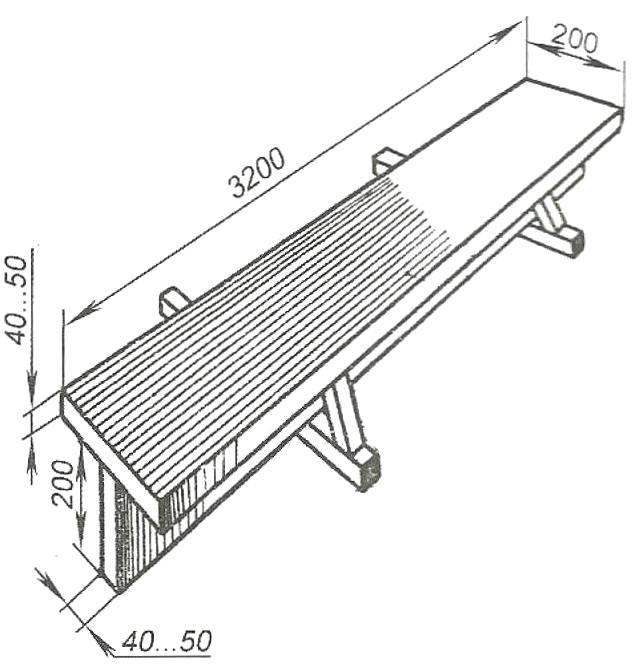 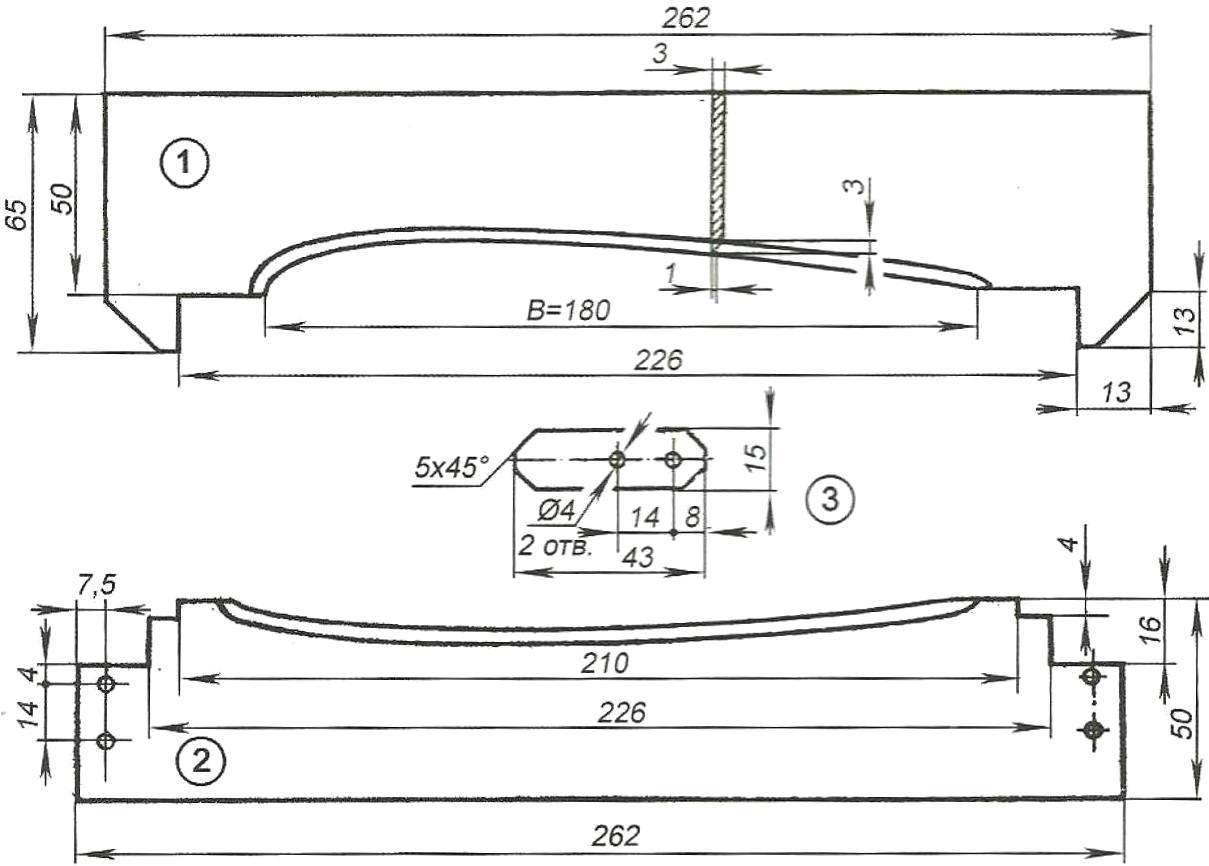 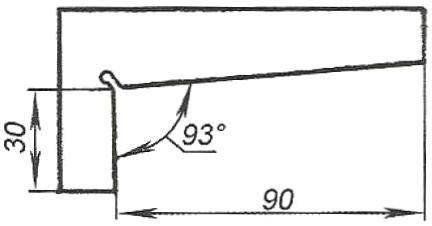 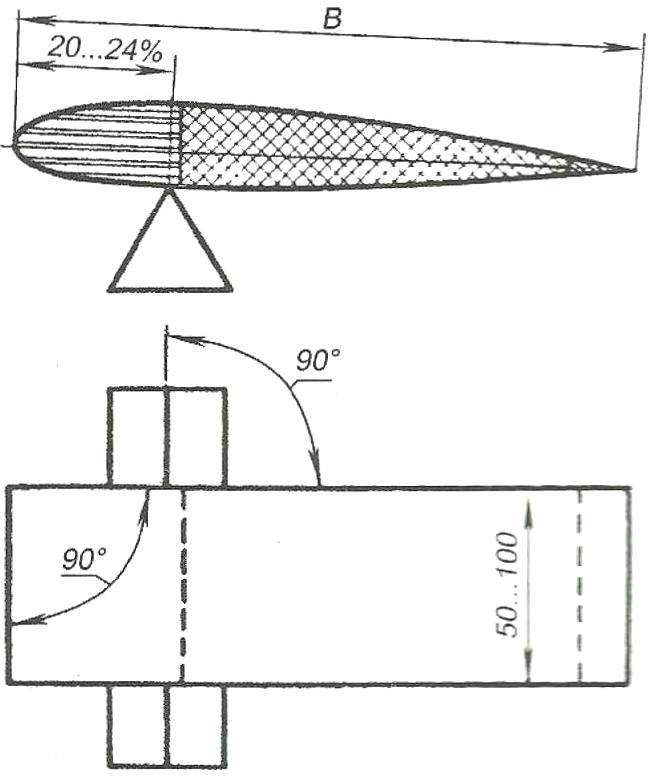 Fig. 1. Device for balancing a rotor

Fig. 2. Strengthening the rotor
The basic pattern is adjusted to the desired size and use it to produce the final fit of the profile with the use of putty, with the basis again taken the lower surface of the blade, the circle line is checked again the straightforwardness of its forming in the distance XH= 71,8 mm from the tip. Convinced of its straightness, the blade is put on the slipway of the lower surface down on the padding with a height of 42 mm (this value is the rounded difference between the height of the lower half of the template and UN= 8.1 mm). One of the pads falls under the inboard portion of the blade, which at this point pressed to the bench clamp, the other along the blade at arbitrary distances from each other. After this, the upper surface of the blade is washed with acetone or solvent and is covered throughout its length with a thin layer of putty resin ED-5 and a tooth-powder of such density that it is easily distributed on the surface and did not flow down along the curvature of the profile (the consistency of thick cream). Fastened to the basic pattern slowly and evenly moving the blade along the beveled forward motion so that its edge all the time relied on a horizontal surface of the bench. Removing excess putty on the convex areas of the profile and leaving the desired quantity in the depressions, the pattern is so fine-tuning the profile. If you find that depression in some places were not filled, this operation is repeated after coating them with a thicker layer of putty. Excess plaster should occasionally be removed when it begins to droop from the front and back edges of the blade.
When you have to move the template straight and perpendicular to the longitudinal axis of the blade, moving it continuously to avoid surface irregularities of the blade. Allowing the filler to achieve full hardness and having smoothed it slightly with sandpaper, the operation of the final putty is repeated on the bottom surface, using the pads with a height of 37 mm.
FINISH BLADES
Making the blades, they are treated with sandpaper medium grain, paying special attention to the formation of the toe of the profile, washed with acetone or solvent and cover with soil No. 138, in addition to the attachment of the trimmer (Fig. 6). Then all the bumps close up nitroshpaklevok, making sure on profiled surfaces formed excessive thickening.
Final finishing work, which consists in the careful removal of waterproof emery paper of different grit of the excess putty, is carried out in accordance with the promotion of compactness of the pattern along the surfaces of the blade without excessive pitching and gap (not more than 0.1 mm).
After pasting of the blades fiberglass with a thickness of 0.1 mm and to cover them with soil on the inboard portion of the blades above and below on the resin ED-5 plate from glued oak or ash dimensions 400x90x6 mm, which ostrugivajutsja so that the blades acquired the installation angle enclosed between the chord and the horizontal plane and equal to 3°. It is checked using a simple template (Fig. 7) relative to the front surface of the butt, and controlling the parallelism of the formed surfaces of the top and bottom of the butt.
This completes the formation of the butt end of the blade, and he pasted over fiberglass 0.3 mm on the resin ED-5 to make the blade tightness. Ready the blade, except the butt, painted by nitroenamel and polished.
Advice on determining the actual position of the center of gravity of the blades, balancing and pairing with grommet, read the next issue.
ASSEMBLY AND ADJUSTMENT
In the previous issue, we described in detail the manufacturing process of the rotor blades of a gyroplane.
The next step is the balancing of the blades along the chord, assembling and balancing the rotor radius of the blade. The accuracy of the installation of the latter depends on the smooth operation of the rotor, otherwise it will arise increased unwanted vibrations. Therefore, the Assembly should be taken very seriously – do not rush, do not start work until you picked up all the necessary tools, fixtures and prepared workplace. When balancing and Assembly must constantly monitor their actions – it is better to measure seven times, than once to at least fall from a low height.
The process of balancing of the blades along the chord in this case is to determine the position of the center of gravity of the blade element. 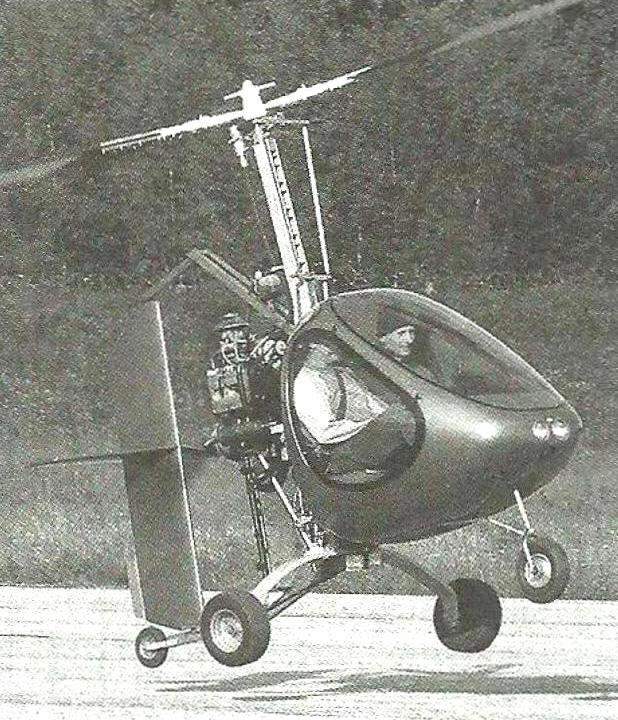 The main purpose of requiring the balancing of the blade along the chord – to reduce the tendency to cause oscillations of the flutter type. Although the described machine the occurrence of these vibrations is unlikely, however, to remember them, and when adjusting you should make every effort to ensure that the CG of the blade was in the range of 20 – 24% of the chord from the nose profile. The blade profile NACA-23012 has a very small displacement of the center of pressure (CSD – the point of application of the aerodynamic forces acting on the blade in flight), which is in the same range that you and DH. This allows you to combine lines DH and CD, which virtually means the absence of a couple of forces which cause twisting of the rotor blades.
The proposed design of the blade ensures the desired position of the CG and CD, provided that manufacture them strictly according to the drawing. But even with the most careful selection of materials, the technology weighting of mismatch may occur in connection with and performs balancing operation.
To determine (with some acceptable error) the position of the CG is made of the blade, running the blade with the seam allowance on the ends 50 – 100 mm. After the final filing the allowance is cut off, the blade is ending, and the cut element is subjected to balancing. 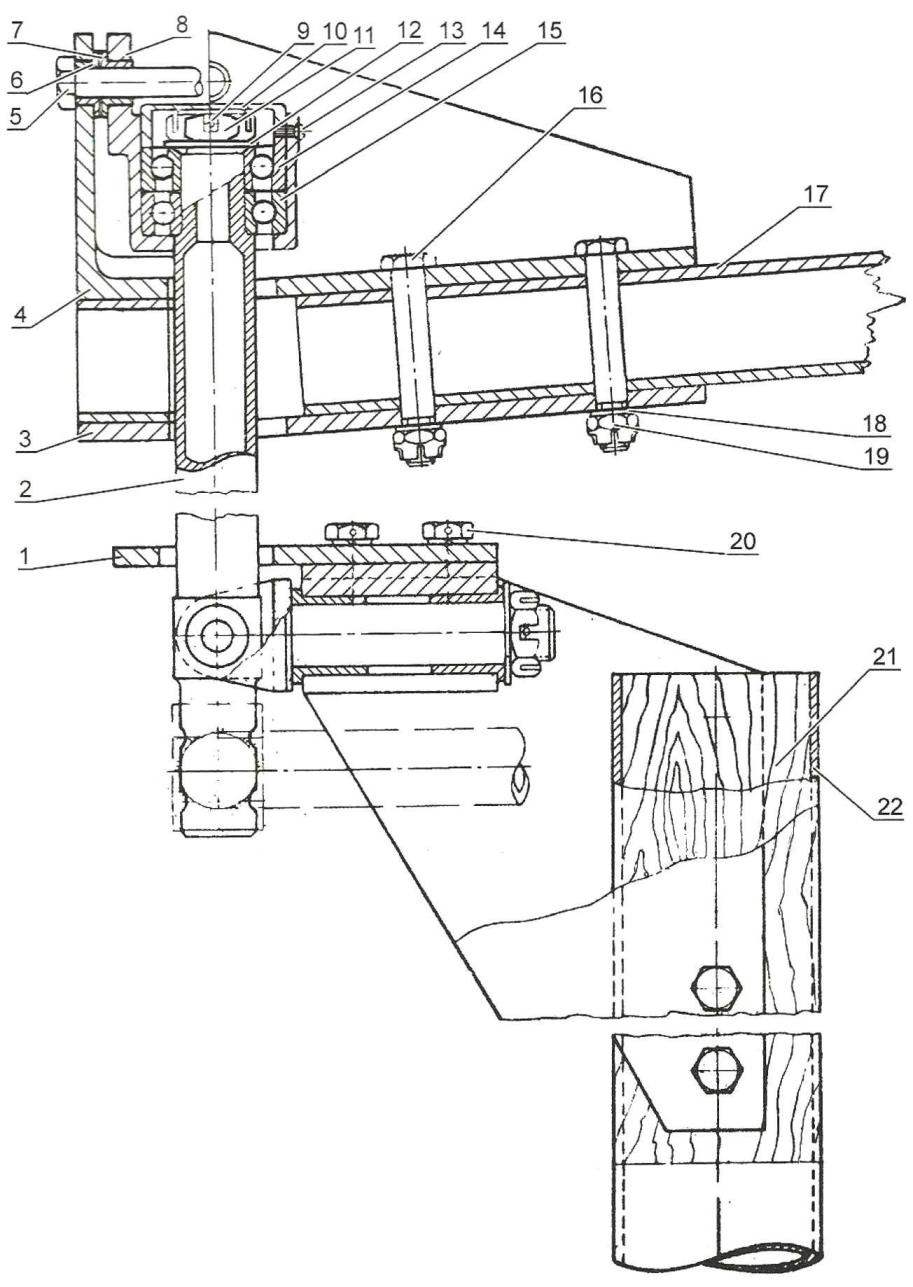 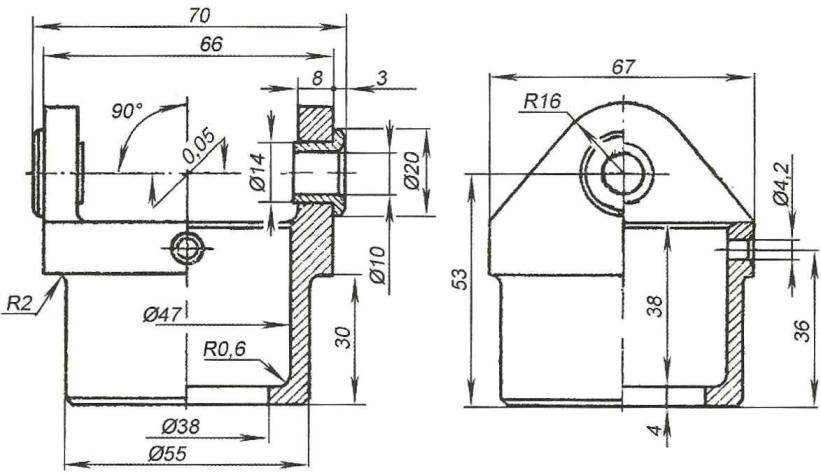 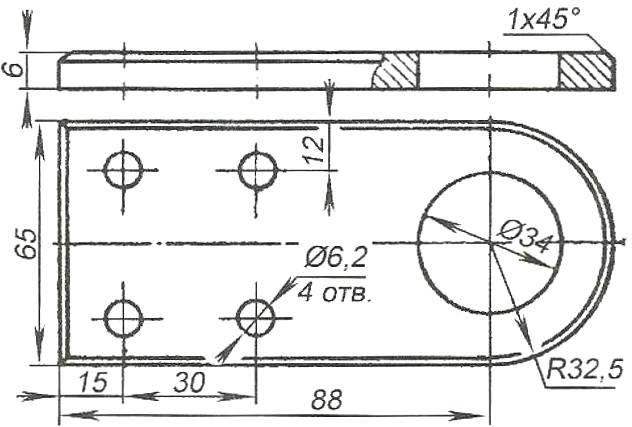 Fig. 8. The limiting angles of deflection of the rotor (D16T)
For triangular, horizontally disposed prism of its lower surface, put the blade element (Fig. 1). His section plane along the chord must be strictly perpendicular to the edge of the prism. The movement of the blade element along the chord to achieve its equilibrium and measure the distance on the toe of the profile to the edge of the prism. This distance should be 20 – 24% of the chord length. If DH will go over that maximum limit for the nozzle profile in the terminal part of the blade will have to hang the anti-flatter cargo of such weight that the COG has shifted forward to the desired value.
The butt of the blade is reinforced overlays, which are steel plates 3 mm thick (Fig. 2). They are attached to the butt of the blade with rivets with a diameter of 8 mm and studs itati on any adhesive: BF-2, PU-2, ED-5 and ED-6. Before installing the pads in the butt of the blade grinded with coarse sandpaper, and the plate is treated by sand-blasting. The surfaces of the parts, i.e. the butt of the blade, lining the holes for the caps and the caps, carefully degreased and smeared with glue. Then clench the rivets and putting the rivets (4 pieces on each plate). After this operation, the blades are ready for the markings to install them on the bushing.
Rotor gyroplane (Fig. 3) consists of two blades, bushings, the axis of the screw with rolling bearings, bearing housings, horizontal hinge and limiter deviation angles of the axis of the rotor.
Sleeve consists of two parts: a U-shaped farms, and the lower plate (Fig. 4). The farm is desirable to make forgings. In the manufacture of it rental have to pay special attention to the direction of rolling was necessarily parallel to the longitudinal axis of the farm. The same naprawienie rental should be at the bottom of the plate, which is made of sheet duralumin brand D16T with a thickness of 6 mm.
Processing farm operation is conducted in the following order: first, the milled workpiece, leaving a seam allowance of 1.5 mm on the side, then the farm is subjected to heat treatment (hardening and aging), followed by final milling as per drawing (see Fig. 4). Then a scraper and sandpaper on the farm displays all the risks and applied transverse to the longitudinal bar.
The axis (Fig. 5) is attached to the pylon at two mutually perpendicular axes that allow it to deviate from the vertical at the required angles. 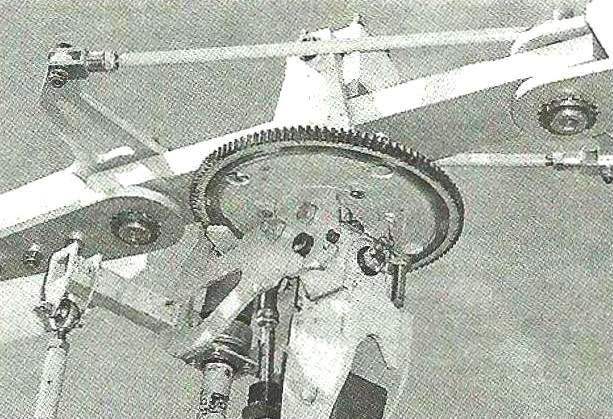 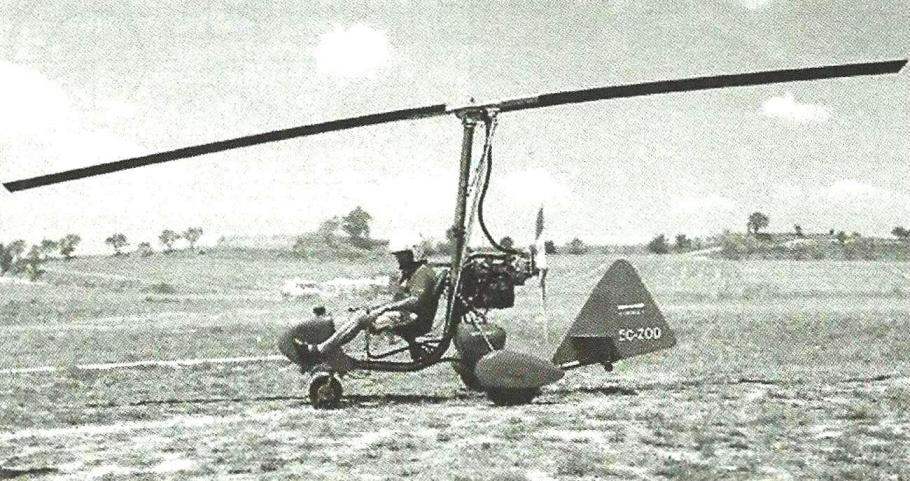 On the upper part of the axis is mounted in two bearings: the lower radial No. 61204, upper-angular contact No. 36204. The bearings are enclosed in a housing (Fig. 6), whose lower inner rim flight takes in entire load from the weight of the gyroplane. In the manufacture of the housing it is necessary to pay special attention to the processing of pairing the side with the cylindrical portion. Undercuts and risks in the interface is invalid. At the top of the bearing housing has two ears, which are pressed in bronze bushings. The holes in the bushings are processed by the scan after pressing. The axle bushing should pass through the axis of the body rotation is strictly perpendicular to it. Through the holes in the ears of the bearing housing and bushings that pressed into the cheeks of the farm, passes the bolt (Fig. 7), which is the horizontal hinge main rotor of the autogyro with respect to the axis of the blade which is making a flapping motion.
The angle of deflection of the axis and correspondingly change the position of the plane of rotation of the disk is limited by the plate fixed to the pylon (Fig. 8). This plate does not allow to deviate the rotor in excess of allowable angles, providing control of the autogyro in pitch and roll.
B. BARKOVSKY, J. RASUK