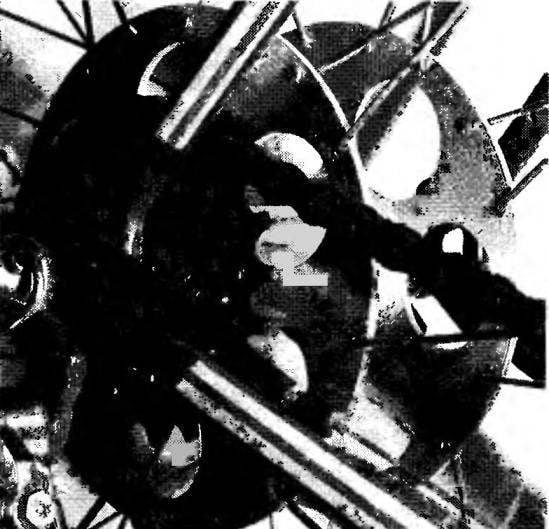 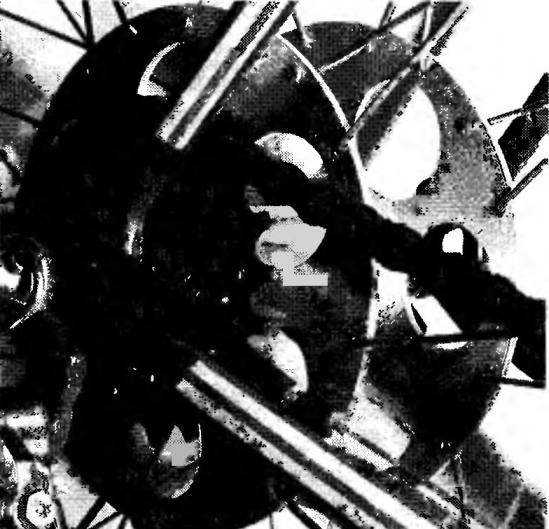 More than two decades of operation legkomotornyh and sports bikes with an analysis of the ongoing failures has allowed us to develop a number of practical recommendations that may be of interest to readers-cyclists. Established, for example, the rear wheel goes down more often than the front. So, the front wheel of my “vsepogodnymi” has successfully passed about 100,000 km It still “feels good”.

A very different picture from the rear, the load on which at almost the same as that of the front, the structural strength is much larger.
In addition, the rear wheel of traditional design has several other flaws, significantly reducing the ease of operation: the replacement of broken spokes in the right while moving the bike spicecom “umbrella” is always associated with partial or complete disassembly of the ratchet;
the spokes rear wheel are not interchangeable in length with the spokes of the front wheel;
the online cups of the bearing sleeve is clearly insufficient, with the active use of the bike. Replace them or the whole sleeve Assembly requires complete disassembly of the wheel and the breakup of the flanges.
To get rid of all these disadvantages, I have developed a new wheel hub with a flange of larger diameter (by spokes walking and road bike) and bearing assemblies, which are installed standard bearings light 200 series. In addition, the hub provides a connecting thread to the international standard М35х1 that install on it any of the shifters screw type.
This hub is a monolithic machined part from heat treated aluminum. On the periphery of the flange of the hub has 36 holes (18 each), where the holes of one flange are offset relative to the other half of the district step. The remaining holes have a decorative purpose and reduce the mass of the hub by about 50-70 g. 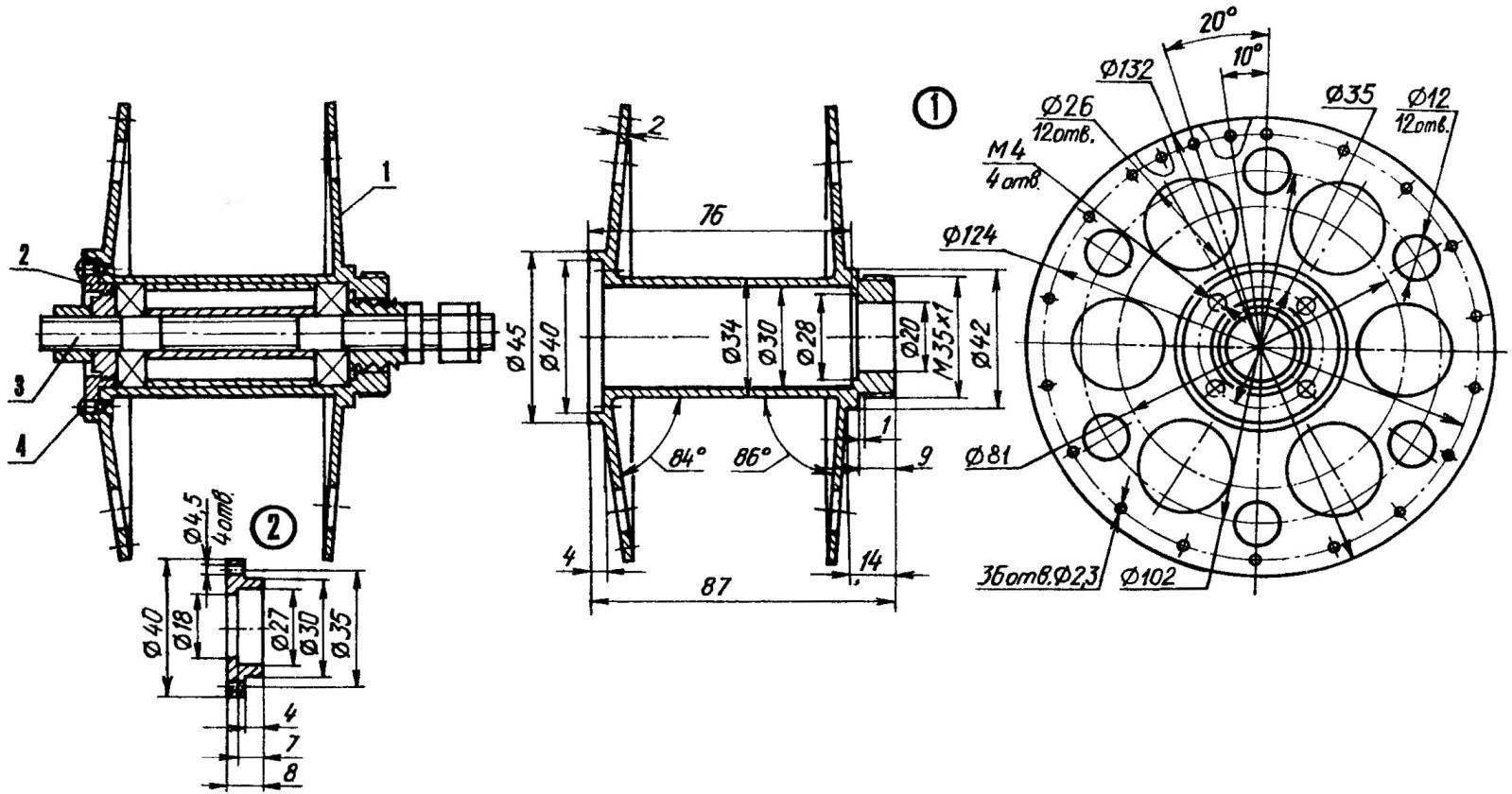 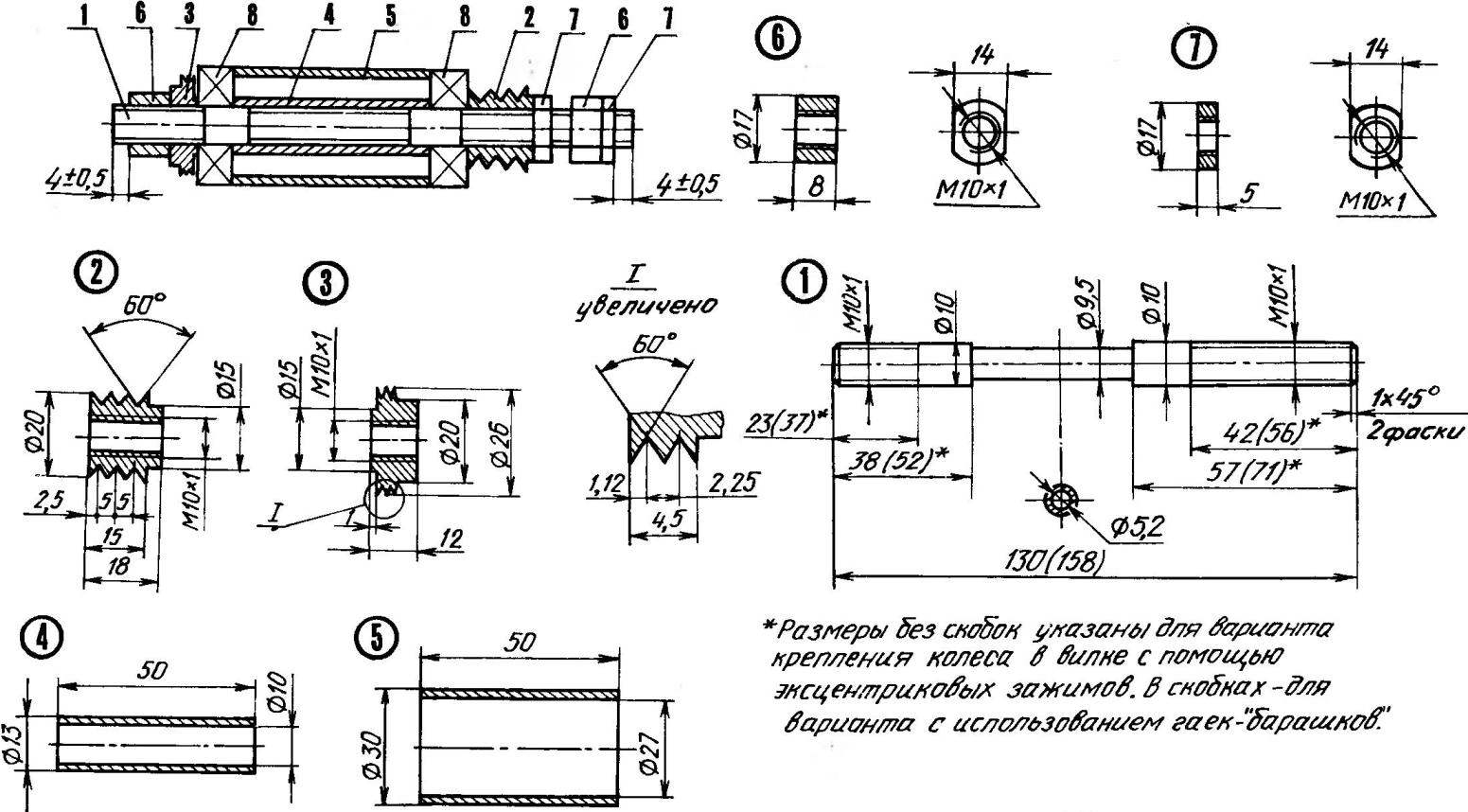 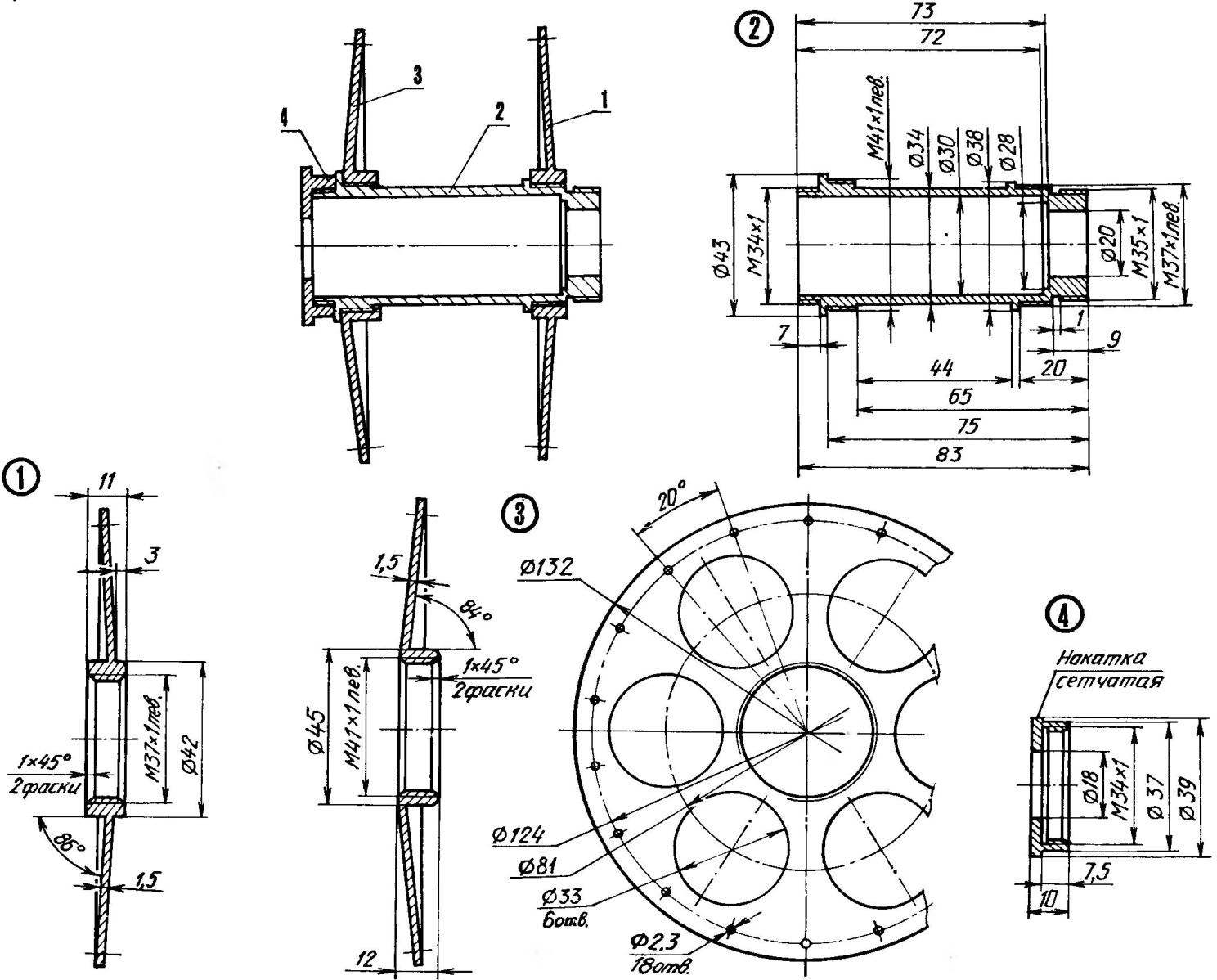 Team hub:
1 — flange right; 2 — body; 3 — flange left; 4 — cover.
Installed inside the hub bearing Assembly, fixed cover, performed as a separate Assembly unit: to a hollow steel shaft are two ball bearings and in between the two standoffs. In the axial direction of the bearings is secured by two nuts, which simultaneously perform the function of sealing, which is provided with grooves along its outer surface. For locking the bearing Assembly and fixing the position of the wheel in the fork of the Bicycle frame is provided locknut.
Bearings are protected from dust and dirt cavities, which are formed between the sealing grooves, special nuts and the relevant cylindrical surfaces of the hub. These cavities are filled abundantly grease directly in the Assembly.
The first time the hub it is best to collect without lubrication, as two or three bulkheads still can not be avoided, and the lubrication is only a hindrance, and polluted. In the process of the bulkheads are determined by the final length distanciruemsa bushings and thickness of shims (for choice backlash), you may have to install between the ends of the cover and bearing (or hub).
Before final Assembly, bearings and special nuts should be liberally grease “Litol-24” (tsiatim-201, tsiatim-213) so that when you install the bearing Assembly into the wheel hub and final tightening of screws of fastening of a cover the excess lubricant delivered to the outside.
The further wheel Assembly is the installation of spokes.
This hub is well proven in operation. However, it is difficult to produce, and harvesting for it is hard to find. Therefore, there is a option team the hub. In this case it consists of a housing and removable flanges. All boarding case dimensions are the same as monoscopic, that is, the bearing Assembly is interchangeable for both design options. On the outer surface of the housing is formed with two threads: М37х1 lion. and М41х1 lion., which screwed flanges. Their geometry is also similar to the previous one.
I have made two wheels corresponding to both structures. Currently, trouble-free mileage of the bike-542 “Sport” (without prevention and maintenance of wheels), equipped with a wheel monotopia was about 5000 km and bike-cars 155-411 “Start-highway” (used in the training regime on the highway) with rear wheel against hub — about 1000 km.
M. POPOV, Yoshkar-Ola