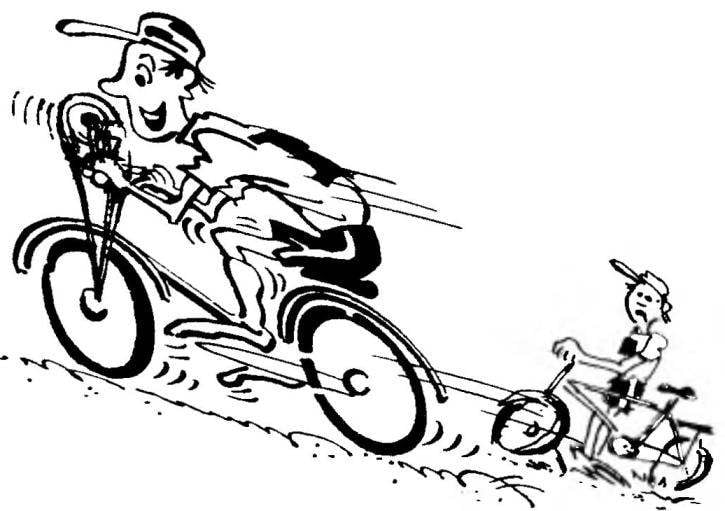 Bicycle makers, both professionals and Amateurs, have long been trying these “broken” cars and more “tame”, that is, to use hands. But since a Bicycle hands are occupied keeping balance by finely balancing the wheel, then to implement it without deterioration of the stability (and, hence, traffic safety) is very difficult. Nevertheless, the idea promises in addition to the physical development of upper limbs and even a significant increase in non-motorised power car.

In the described structures manual drives managed to minimize the deterioration of the stability, while maintaining the ability of the hands to manipulate the wheel and at the same time to help the feet to move the bike.

The technique of bike riding with this drive may figuratively be called “push-push” design and drive the next. On seatpost rack loosely fitting steel sleeve. To the bottom of the sleeve tangentially welded rocker, the ends of which is articulated through thrust of duralumin tubes of one hundred swarm the cots associated with the wheel. For swivels the rocker arm, linkage and steering wheel, drilled the holes for the M6 bolts.

To the top of this sleeve perpendicular to its axis welded round rod with diameter 16 mm with thread on the end. The rod freely, as well as the bushing on the bar, wearing two rings and fixed scontrino nut. To each ring with their ends welded to the notched levers bent from a steel half-inch pipe. Pipes bent in a cold state with a preliminary trimming of the internal radius and the subsequent welding.

One of the regular rods on the shaft of the carriage is rotated by 180°, that is, its position coincides with the other. To the standard rods welded to an extra (without pedals) directed in the opposite direction. The additional rods are connected with notched levers in the curve in a similar way and the same rods as the yoke with the wheel.

To ensure the operation of the actuator sleeve of rear wheel braking extracted cones and the wheel-mounted hand brake, the cable of which is connected to the lever, naselennom on the handle of one of the linkage levers. On the pedals can be mounted tulips.

Equipment drive with the same drive next. The cyclist with both feet simultaneously pushing both pedals down and pull the lever up. Then leg raises, and the hands pushing the levers down. In all operations remains rigid connection of the levers with the wheel, and thus control of the bike.

Concurrent and ongoing work of both hands and feet greatly increases the power. In connection with this 19-bevel sprocket rear wheels can be replaced by a 15-bevel.

It’s fundamentally different, but even more simple independent manual drive. Cycling with it, in addition to classic pedaling legs under the action of a manual drive, reminiscent of the movement of the rower.

The design of this drive are the following. On the most advanced rod steering worn thrust bushing. Of removal removed the wheel, and in its place installed a bottom bracket cut out of old bike frames, one of the nozzles of its two pipes (the second should be cut off flush with the body of the carriage).

In front fork rear wheel without the brake cone, and its sprocket are connected by stretched chain with a large sprocket Dobby unit.

Both rod manual actuator is oriented in the same direction. the pedals have been removed and pressed onto axle tube with standard plastic handles. The connecting rods with tubes and handles, in addition to its direct purpose, performs the function of the steering wheel.

In normal driving the steering wheel locks with two latch-hooks, bent from steel wire. Stoppers welded to the bushing freely mounted with different angles to the axis of the bridge is welded by its middle to the bottom of the thrust tube. 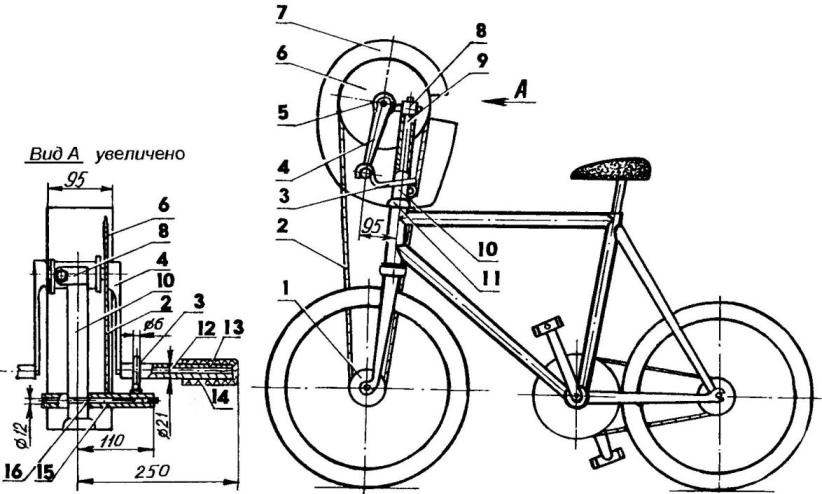 Landing the rider on the bike with this drive when driving on a level road or downhill the same fit sports shift-racer, the trunk of which is nearly horizontal, which greatly reduces air resistance. With the same purpose, the manual actuator can be closed light cone from sheet plastic or metal pin which is easy using the top nut of the steering column.

The same drive is useful when travelling uphill. Rejecting both of the stopper arm up and back and pressing the feet on pedals should be the power to pull yourself with both hands tube the helm, work the oars, the rower in the final stages of the stroke.

Rotating with manual drive front wheel, the cyclist significantly increases the thrust and power of non-motorised two-wheeled machines, while maintaining the necessary stability when riding.

From the editor. This drive has a drawback: it is impossible to make a steep right turn, the chain will touch the frame.