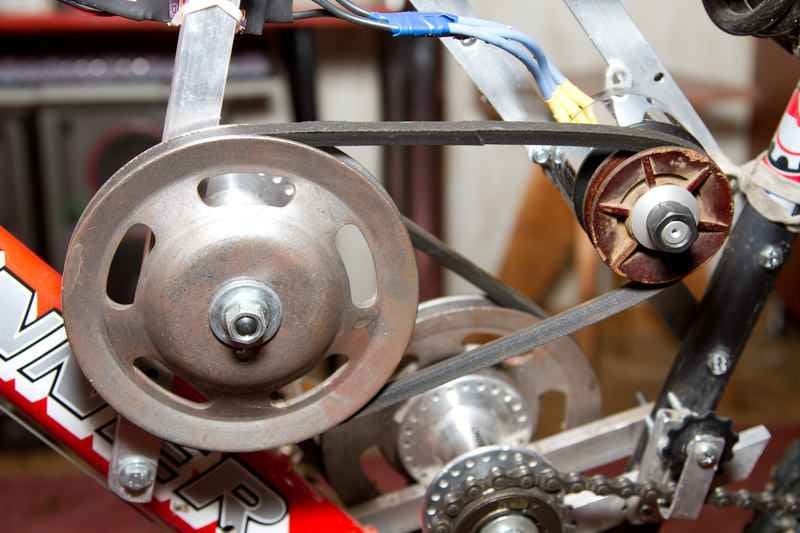 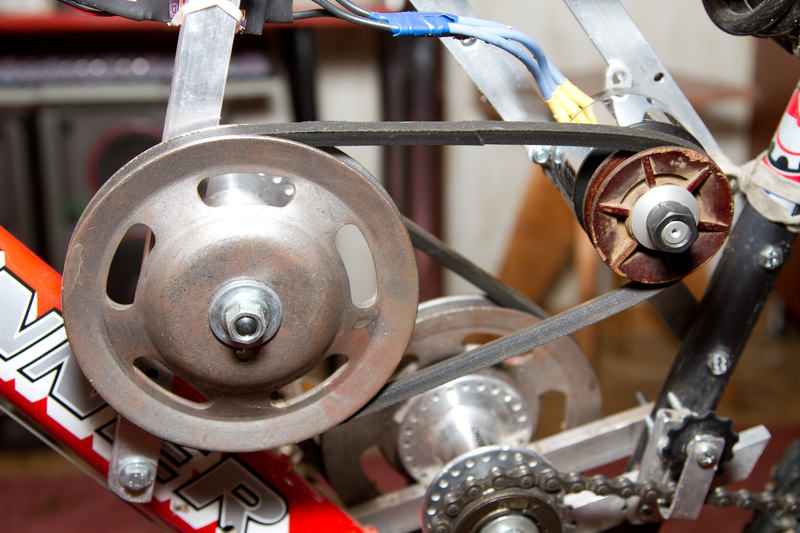 It all started last year when I became increasingly commute to work by bike, because the expectations in the automobile crowd, after work, the moment of arrival home began to strain more and more. Trip from home to work took time almost as well as by car. But given the fact that the road passed a large part of the roads where there was practically no movement of cars along the coastal strip of the reservoir and picturesque alleys, which was carried out in the morning warm-up sport-oriented people, and the shore was decorated with a yawning fishermen with fishing rods – Cycling brought also moral satisfaction from watching everything happening around.

The only downside, clouding the trip to work was a slide, a length of about 300 meters with a fairly steep ascent, at the entrance to which had to drop to lower gears and applying considerable effort. The result was not a comfortable state before the working day in the office.

The idea was born to equip your bike engine, which would help in difficult moments. Studying quite a lot of videos on YouTube, forum site endless-sphere.com and other resources about electrification in the home bike the mind has formed a picture of the task. It remains only to implement.

The idea of buying a ready-made set with a motor-wheel front-drive seemed to me trite simple, and also for two other reasons: small developed power (500 W) and high cost – was not in her favor.

Emphasis was placed on rear-wheel drive and the use of the brushless motor. The efficiency of this solution, it seemed, must be higher than the front-drive motor-wheel.

Already having some experience with radiomodule, I decided to use to implement his ideas, components from HobbyKing as basic in the construction of the bike. The mechanics decided to use one that is easy to get at any auto or bike store.

For the construction of bike was used the following components:

Since the bike I planned to build a rear-wheel drive, torque transfer to the rear wheel decided to use chain transfer and to increase transfer rate to put a star with a large number of teeth.

I originally planned to cut a star with the right number of teeth with laser cutting in any workshop, but a 3D-ready template of the desired configuration took a lot of time and nothing good resulted. The order also cutting along with the manufacturer by the designer of the template has resulted in a lot of money (about 1500 RUB.). It’s put on there is the basic principle of the conceived idea – to minimize costs on custom and usage-the-shelf inexpensive components. 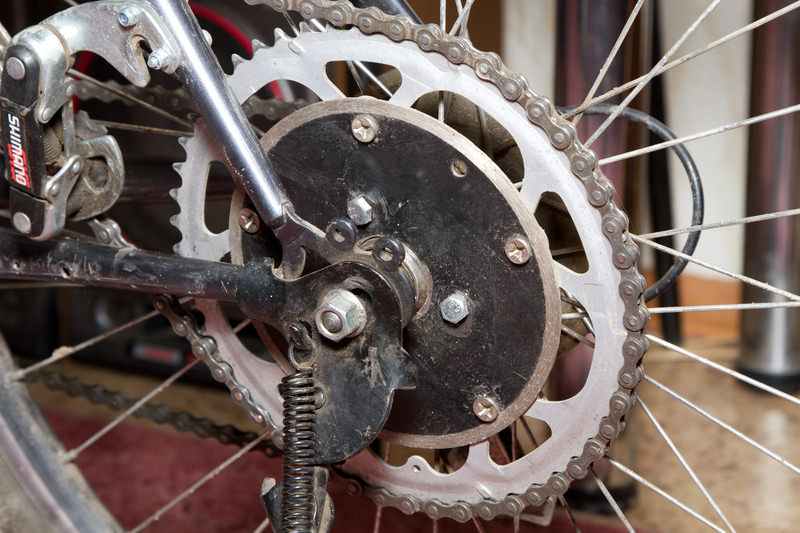 So the bike shop (the bike shop) purchased the biggest star 52T, taken from the magazine. And for attaching it to the hub of the rear wheel at the hardware store bought a diamond disk grinders of suitable diameter (15 cm). The Central disc hole had a counterbore drill bit and a file to the desired sleeve diameter rear wheels. Mount this design to the rear wheel is made with three bolts to the spokes. It is desirable for the attachment to use the “eared” nuts, which are well cling to the spokes, as well as autocentric (with liner). The star should be balanced on a revolving wheel, to avoid wobbling in different directions. 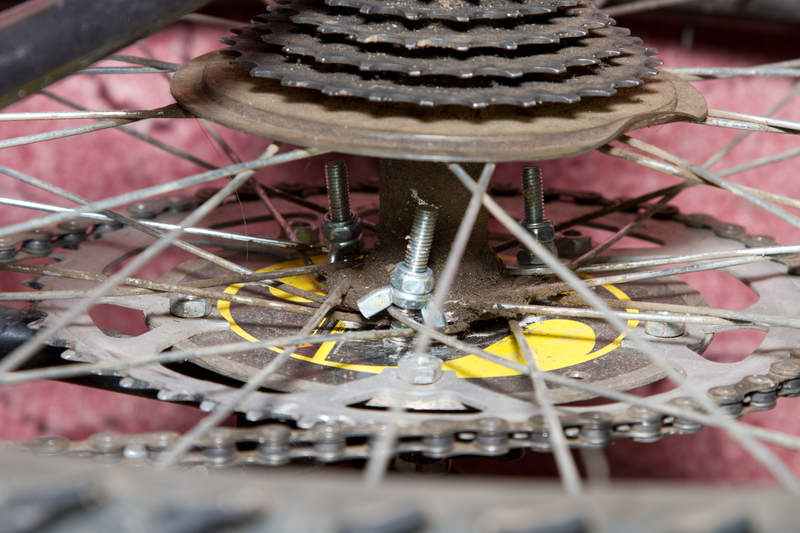 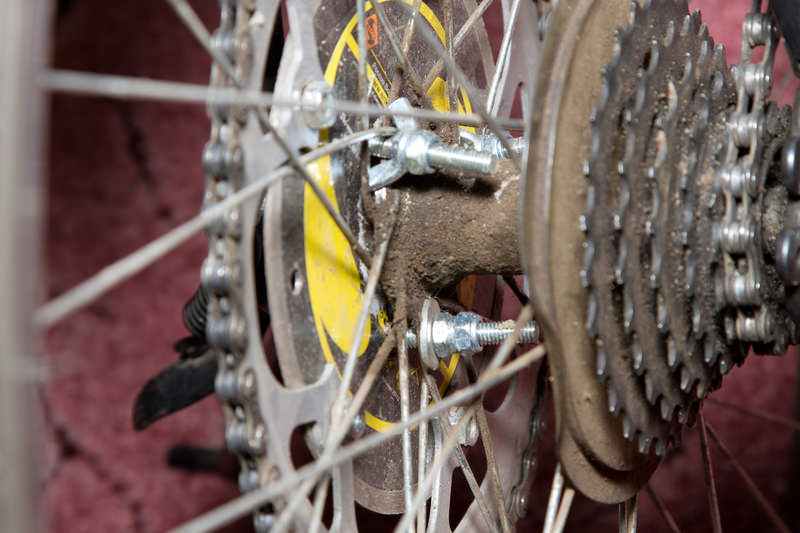 To prevent the transmission of torque to the engine with the spinning wheel I used a freewheel 16 teeth, which is easily purchased at any bike store. The problem is that it is designed for use with stronger chains and standard narrow chain on it do not sit down. The teeth need privile to grind a little on the sides. I used this manual the drill with a nozzle of the grinding stone. 10 minutes and you’re done – file it lasted for a long time. 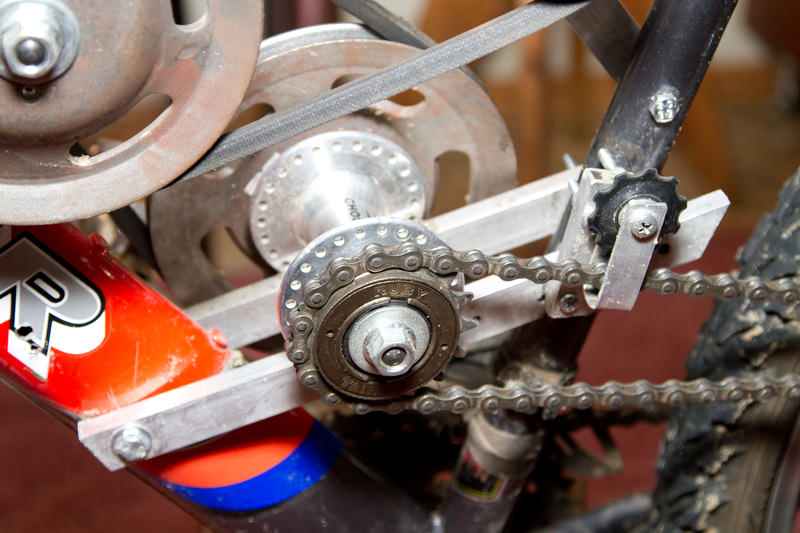 Since freewheel is designed to wrap thick on the back sleeve it has an internal thread of large diameter and for attaching it to the gear sleeve (with thread diameter 10 mm) required adapters. With this adapter I also was able to find in bike store. It is sold complete with a sleeve of black color and I don’t know why it is needed. The photo shows the second adapter that was on the other side of the thread on the back. 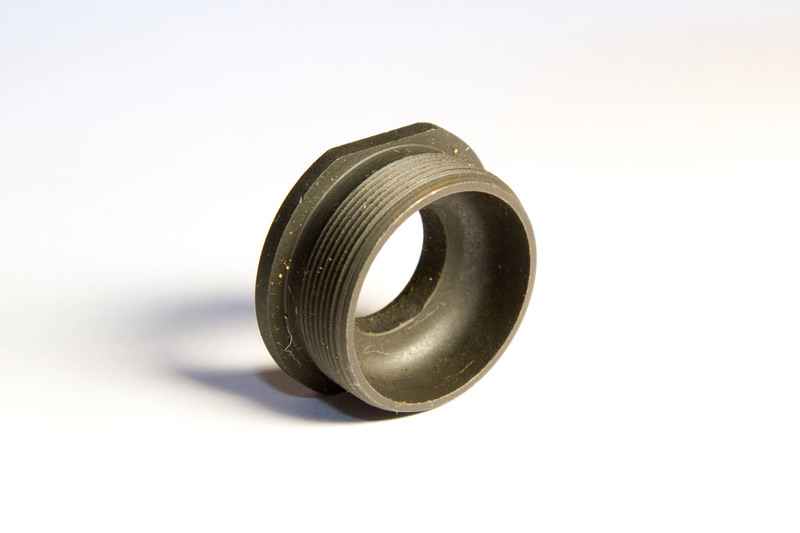 For tensioning the chain from the driven to previla star rear wheel I used a standard cheap switch speeds. The configuration of the tensioner turned out, of course, not the most successful, but overall it fulfills its role, and there is nothing better I could not come up. 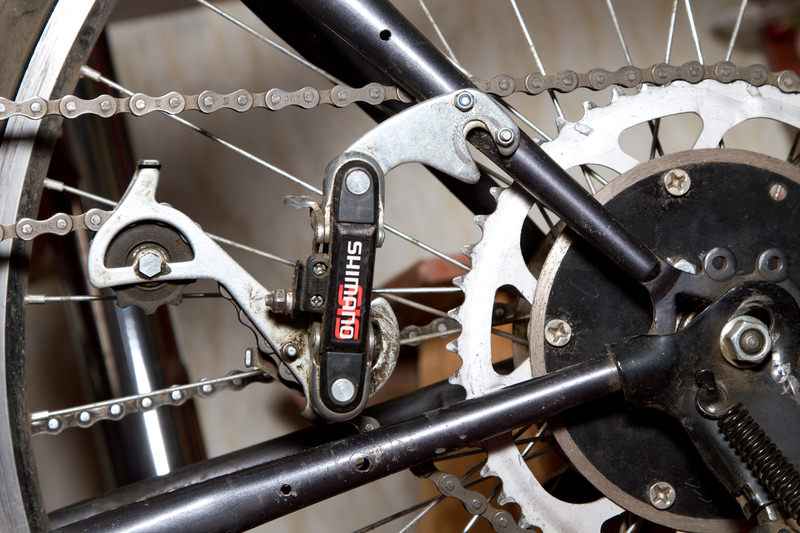 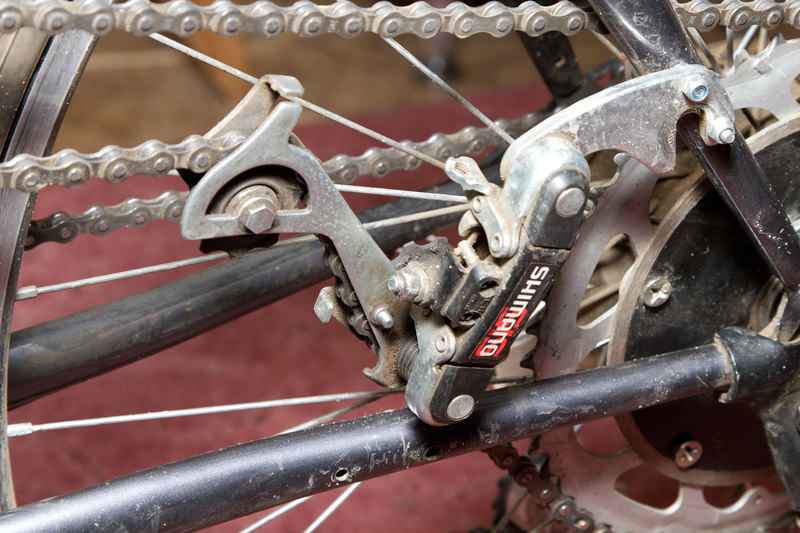 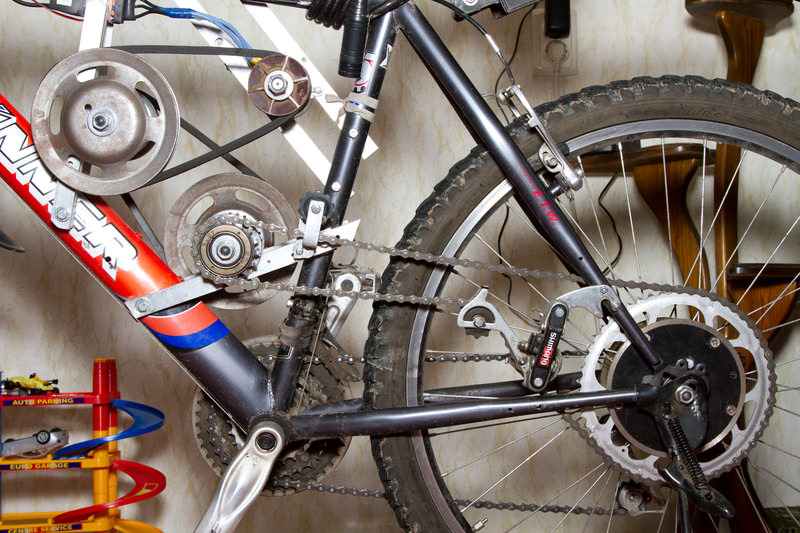 For the phased transfer of torque from the engine to freewheel I used two transient sleeves mounted with the pulleys under the belt of the generator VAZ-2108. The whole design is secured with aluminum profiles on the frame of the bike.

UPD. The frame should be made of composite materials like carbon fiber because it needs to be monolithic and without damage to preserve the strength. Otherwise the frame may break. Not recommended also the use of aluminum frames. It is best to use as I have a steel frame. 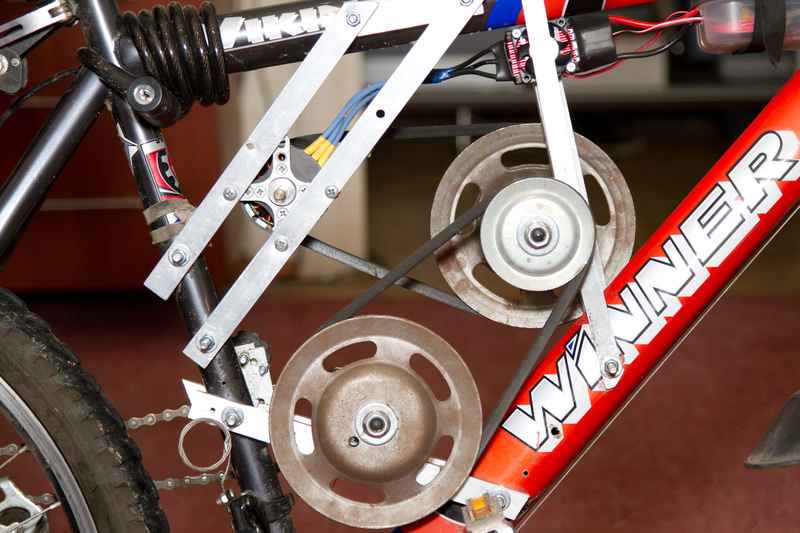 The linking sleeve is also not normal. They have much more the diameter of the planes, where the spokes are affixed. This allowed us to attach them to the aluminum profiles. For this hole under the spokes a bit reams under the M3 screws. 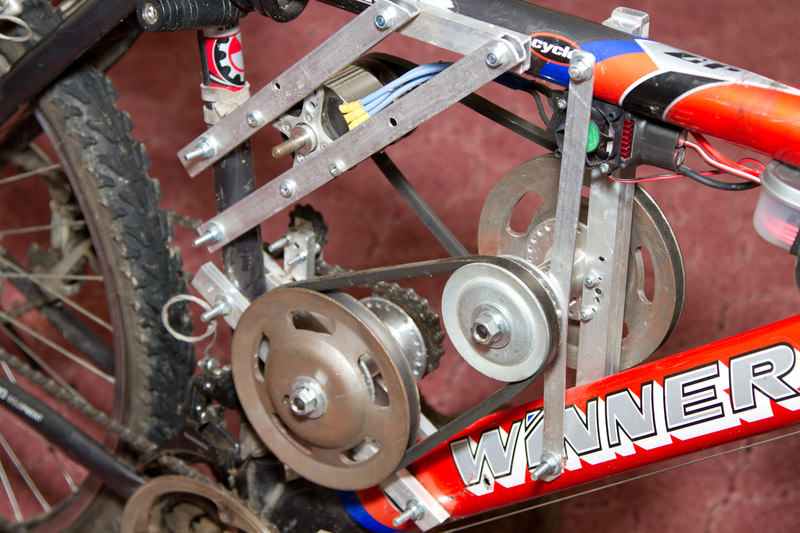 In principle, it is possible to use one transmission link V-belt transmission. Stock engine power enough to drive on straight roads and slight slopes. But for more confident riding on the sand and in the hills it is better to use two links. Each link has a magnification of about 2x. Thereby increasing 2 times the transmitted wheel torque.

The motor controller I attached with cable ties to one of the aluminum profiles, attached to the frame, using better contact thermal paste. This allows better evacuation of the heat from the controller and in the process drive felt as a profile and frame in the vicinity of the controller heat up. On the other side of the controller where it is installed the radiator, I carefully cut with a knife the heat and added a small fan from an old CPU Intel 586. Although the experience of the operation it was not needed. 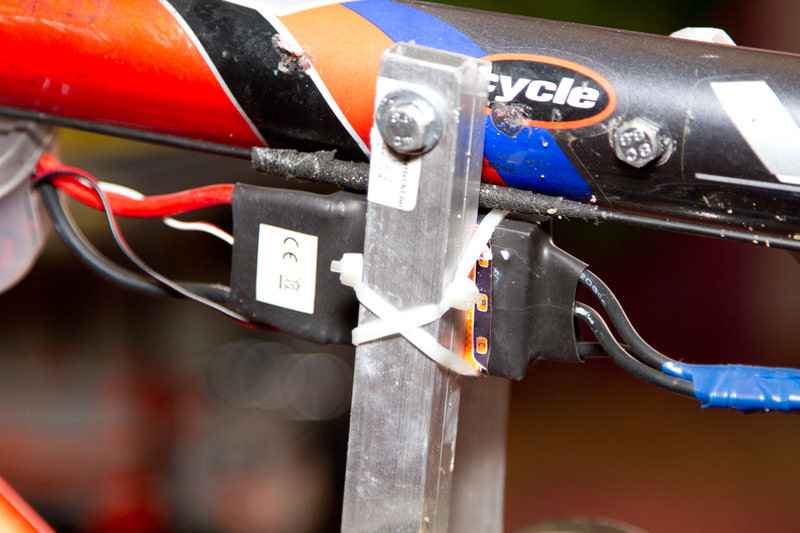 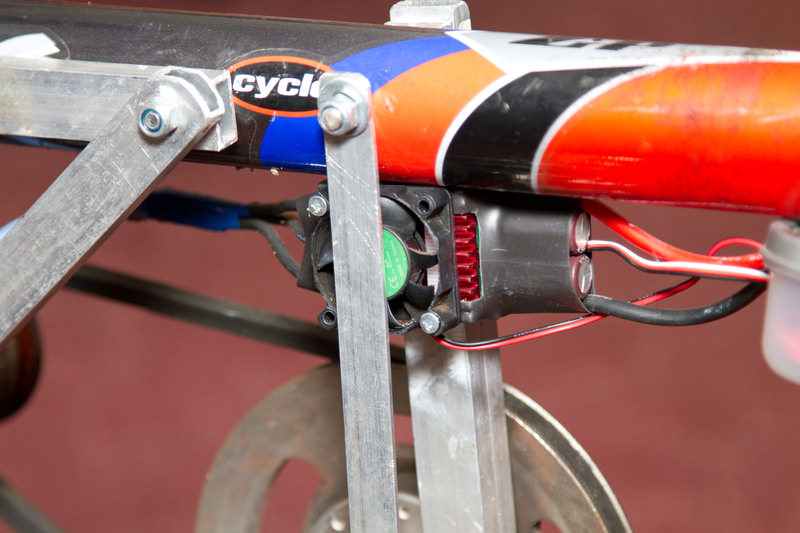 To control the power of the engine I used a servo tester, available in manual control mode. To power the servo tester and the cooling fan is a chip L7805 (КРЕН5А). 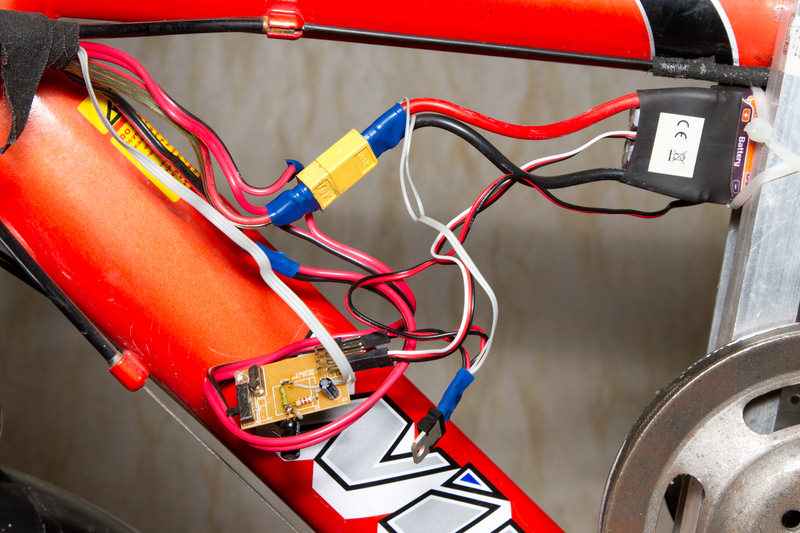 At first, I UN-welded with the servo tester variable resistor and put it near the right grip on the wheel. It turned out that this way to continuously adjust the power has its drawbacks. Especially uncomfortable to use in extreme situations when you have to brake sharply when a hand moves on the lever of the brake, and the engine continues to produce torque by retarding or even a locked wheel.

Therefore, I have simplified the scheme and made miniature reed the button “gas” (without fixing) under the thumb of the right hand, which when pressed, the engine starts to produce maximum power. To exclude sudden jerks, set the input of the servo-tester is a voltage divider on two resistors and a capacitor to 100 UF. Thus ensuring a smooth increase and decrease of engine speed when pressing and releasing button a “gas” of about 0.5 – 0.7 seconds. 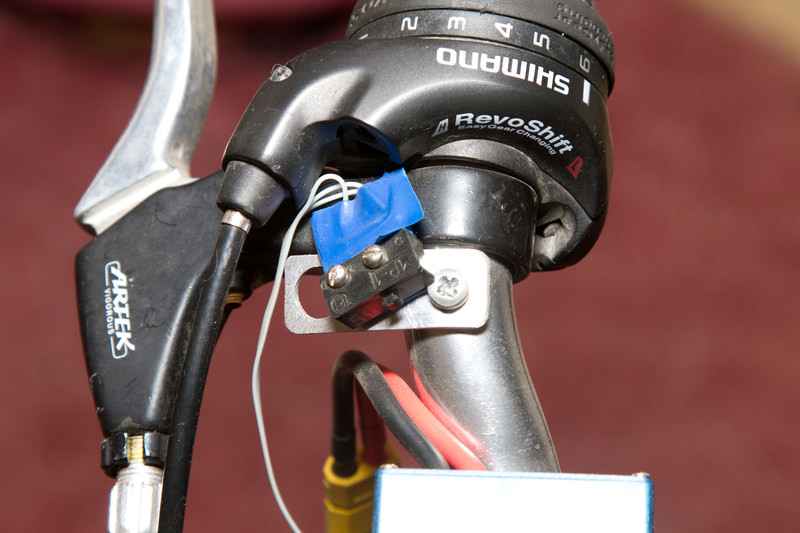 On the wheel put the power meter to monitor the voltage of the battery and measuring the “consumption” stored in the battery capacity. The battery is located in a zippered seat bag. Thereby killing two birds with one stone – the battery is easily removed for recharging and during use in the closed safety cover, in case of emergency failure. 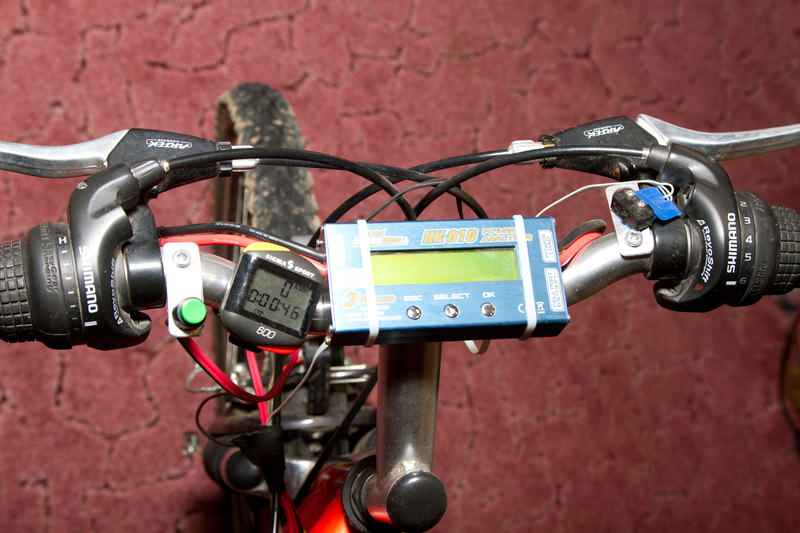 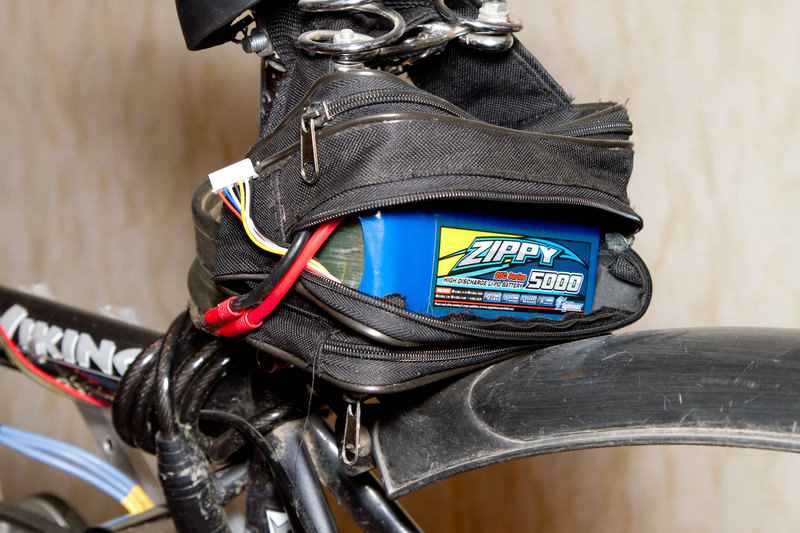 The left arm on the steering wheel put the reed button (without fixing) for the alarm scare away pedestrians. As the signal applied piezocrystals car siren — whistles. It is quite normal feeling when short-term work at the voltage of 22 V (6s). Louder than 12 V.

Describe some of the advantages and disadvantages of the applied solutions. In order.

Chain transmission to the rear wheel has a pretty long mileage, which leads to the gathering chain with privile when driving on a bumpy road. To avoid this it was necessary to fence some sort of chain guide before previlon from a piece of aluminum foil and a plastic roller. Because the circuit when driving beating on it it creates an unpleasant loud knocking sound. On good it is necessary to put a tensioner or chain guide in front of previlon, but have not yet figured out how.

Mount back the guest stars to the wheel isn’t the most reliable. There is a possibility of damage to the spokes or jump-out mounting star with spokes. Once such already was, when I used ordinary nuts. After that I put the “eared washer” and autocentric. The current bushing better to change the bushing with mounting for disc brakes and big star to put in its place. But since the diameter of the star is much more than disc brakes, I’m not sure that the distance from the frame enough to freewheel.

Wedge transmission from the engine to previla at first was quite acceptable. However, the efficiency of such solutions leaves much to be desired. By increasing belt tension increases the load on the bearings of transient bushings and engine, which leads to increased wear and friction forces, and hence decreasing transmission efficiency. When reducing the tension of the belts under high load (standing start, uphill) begin to slip, and it also leads to a decrease in efficiency. To find a balance is extremely difficult. The use of V-ribbed pulleys are problematic due to their bulkiness. The best solution seems to use a toothed transmission belt.

Manage engine power as in the first embodiment using the variable resistor, as I wrote, often uncomfortable. The use of the “gas” often unnecessarily, because there are times when you must drive slowly and smoothly. Traffic pattern a “gas – acceleration – coasting in neutral” though the consumption of the battery capacity is almost comparable effectiveness with movement at a constant engine work, has the important disadvantage of slippage of the belt during acceleration. But in the “gas” feel the full power, which is installed under my seat.

Well, not fundamentally, but still, the sound of the engine and moving the chain with an open design often frighten passers-by. If one of the modellers knows how to whistle brushless engines, he will understand.

On the basis of the diameters of the pulleys wedge transmission (150 mm and 80 mm) and the number of teeth previla and stars on the rear wheel (16, 52), we obtain that the total gear ratio is equal to 11.4. It’s not very much and not enough for high-spirited-in the mountain, have to help foot. So the engine I put ceramic pulley from the washing machine (bought at a flea market) with a diameter of 64 mm. It is possible to increase the gear ratio to 14.3. When the battery voltage is 22.2 V, the maximum theoretical speed will be 45 km/h. taking into account air resistance and power loss in the transmission links, it seems to be true, because on the straight I accelerated to 40 km/h.

The maximum current drawn by the motor during acceleration in the mode “gas” of about 60 A. Thus, the power output is about 1250 W, which is several times higher than most sold motor wheels. Acceleration to 40 km/h in a straight line not more than 10 seconds.

In the current configuration I finished last season from July to October almost every day to work for a daily mileage of about 20 km.