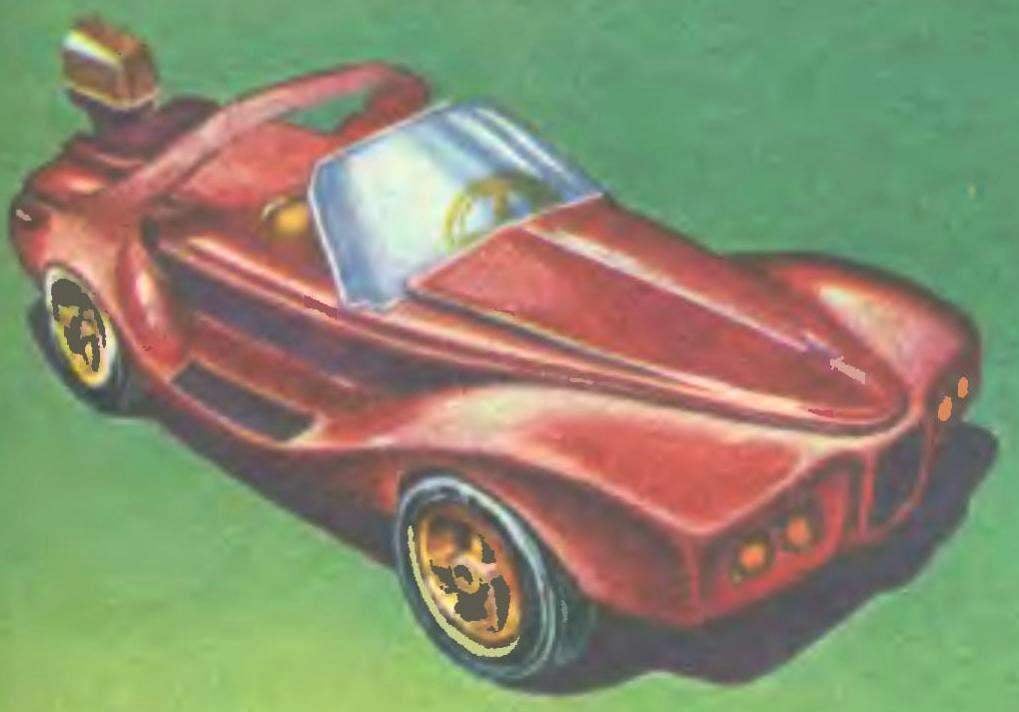 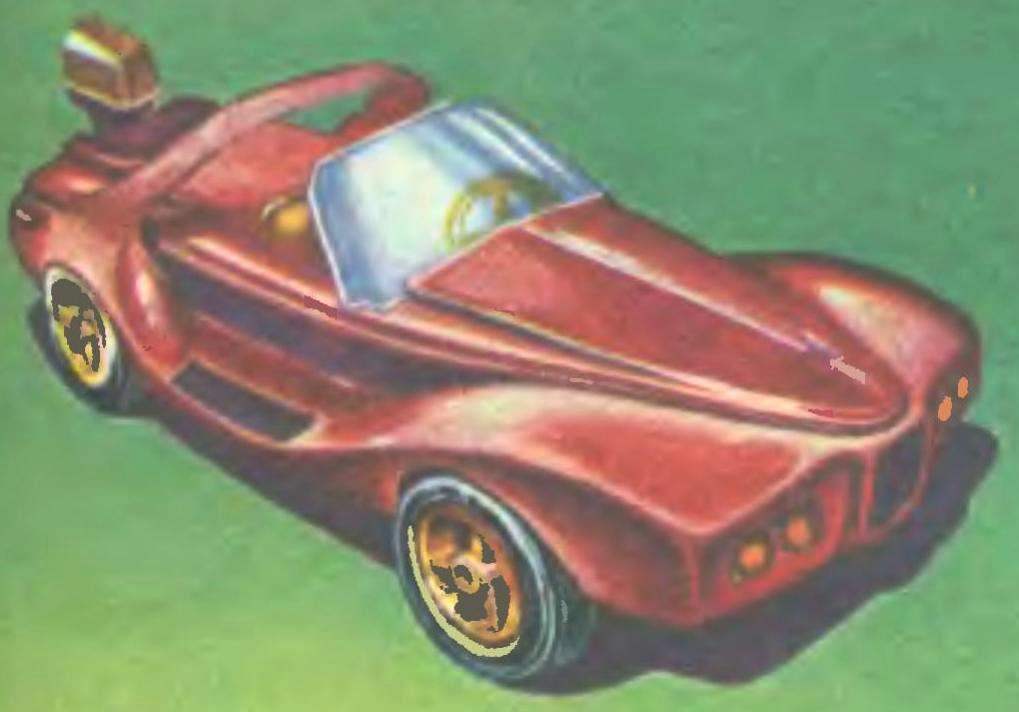 Among the huge variety of all-terrain vehicles of particular interest is the class of floating cars-amphibians. They are irreplaceable for geologists, exploration expeditions, the construction of gas and oil pipelines, for river service. And many automakers Amateur Amateur tourism — seek to create floating cars.
Creating the world’s first amphibian with its own engine has occurred, quite frankly, by accident. In 1804, the American olifer Evans undertook the construction of a small excavator. He erected it on the shore far from the water, and when he finished, he realized that to drag it to the water — it is very difficult. And then he figured to put the body of the excavator on wheels, adapted to them belt driven from steam engines and proudly proceeded on its structure (see tab) on the streets of Philadelphia to the surprise of residents. But it took another hundred years until the invention of the Amateur inventor grew up in a particular direction in design.
Only in 1907, in the waters of the Seine slid a special amphibious vehicle (Fig. 1), built by the French Revola. It was the world’s first floating car. It was equipped with an internal combustion Engine with a power of 25 HP and developed on land speed 30 km/h and on the water — 5 km/h. 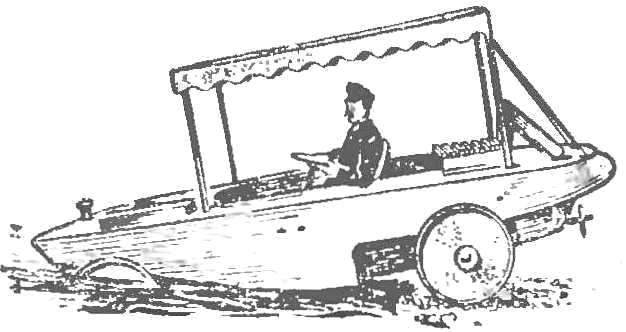 Fig. 1. The world’s first amphibious vehicle.
Only at the end of 20 years, the designers began to reflect on the creation of a special floating vehicles, primarily for military purposes. In our country in 30 years was built prototypes of armored vehicles flying the PB-4 is not grusonii chassis of GAZ-AAA; in the United States has released several samples of high-speed wheel-tracked combat vehicles amphibious “Christie”.
A powerful impetus to the development of floating car gave the second world war.
In 1944 in the USSR there was a slight floating car GAZ-46, known as the MAV (see box), with an engine capacity of 55 HP and He had waterproof metal welded housing, for movement on the water served as the propeller and change the direction of movement of the water wheel. The car could carry 5 people and 250 kg of cargo. The speed land 90 km/h water: 9 km/h light Such amphibians were widely used by our troops in crossing the Vistula; in memory of those shock battles in the Polish army Museum in Warsaw is carefully stored MAV, whose body is pierced by enemy projectile.
In the class of heavy amphibians in the Soviet Union developed floating truck ZIL-485, or BAV (Fig. 2). He also had metal welded waterproof design, all driving wheels, a propeller and a water rudder. The car was petrol engine rated at 110 HP When capacity is 2.5 t, she developed a speed of 60 km/h on water 10 km/h. the Same floating car DUKW-353 was in service with the us army. In the British army at the end of the war there was a four-amphibian “terrapin” with the capacity of 4,5 t 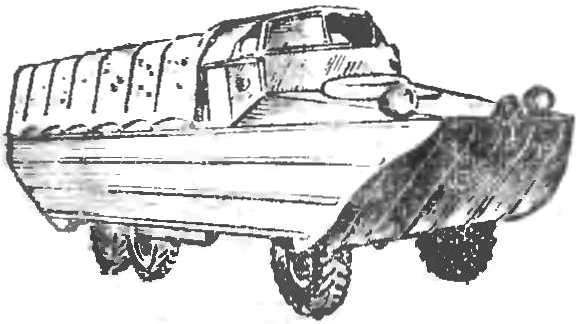 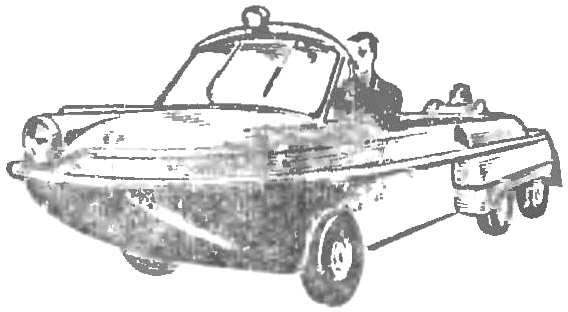 Fig. 4. General diagram of the device of the cargo of amphibious vehicle.
Amphibious vehicles during the second world war have determined the main structural directions of development of this class of machines. Buoyancy is provided by the waterproof housing, which has three compartments (Fig. 4): motor compartment and cargo compartment; the movement of the water is provided by a propeller, in the direction of a water wheel. Machines are equipped with bilge equipment, navigation devices, winches or capstans for self-recovery.
In 1963, one of the firms of Germany has released a small series of five-passenger “antikarov”. This “amphicar” was used a conventional petrol engine with a capacity of 38 HP; it was located at the rear, with drive to the rear drive wheels and propellers. Amphibious had a weight of 1050 kg, a top speed on the highway 110 km/h and 12 km/h. “Amfikar” has a great success among the campers and is the only example of serial production of light tourist amphibians.
However, this gap is compensated by the many Amateur designs, often reliable and original.
Eight years of work Perm driver F. Menzel over its three-axle amphibious vehicle (Fig. 3), equipped with a motorcycle engine.
But most inventors as bases for amphibians use conventional cars. For example, the Czech Josef Sindler recently demonstrated on the Vltava river floating variant of the common “Skoda 100” (Fig. 5), and the inventor from Germany equipped with “Citroen” special “vessels” that allows him on the water to speeds of 10 km/h. the Englishman Buchanan on the floating “Volkswagen” (see box) have overcome the Strait of Messina between Italy and Sicily. 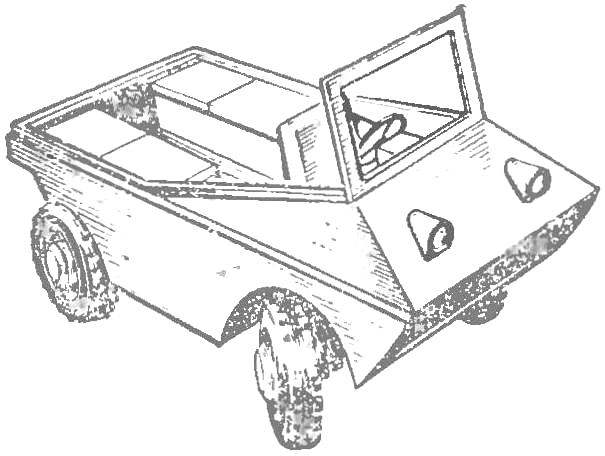 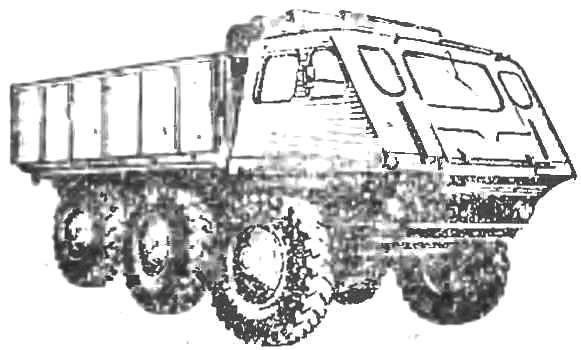 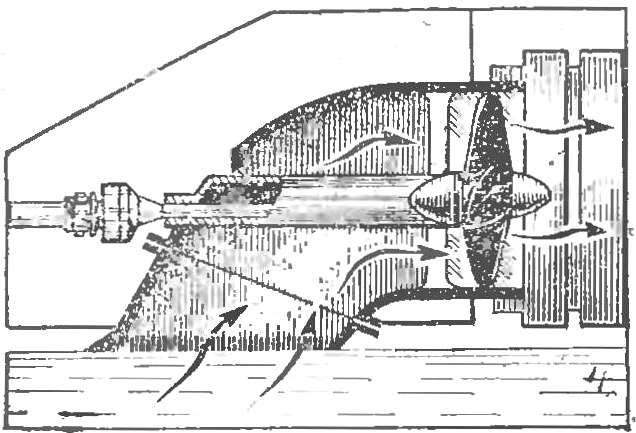 Fig. 8. Scheme of arrangement of the water jets.
To the class of light utility vehicles special floating design is the amphibious “Fox” (Fig. 6) with a lifting capacity of only 220 kg. Full weight of this car is just over 500 kg. the Body is made of fiberglass; seat, fuel tank and items of equipment from a variety of plastics. The air-cooled engine with 40 HP drive on all 4 wheels and the propeller, which allows using the hydraulic stepless and smoothly to adjust speed and to achieve high compactness of the entire transmission. The car on the highway going at a speed of 80 km/h on water 10 km/h amphibious Base little just 1854 mm.
Abroad created a whole series of versatile cargo of amphibians moving through the water only due to the rotation of the wheels; sometimes they are provided with a hinged boat motors. On a heavy truck, amphibian “Drake” (USA), with four drive axles (see box), with capacity of 7— 8 tons, has two engines with a capacity of 155 HP One results in the first and third axis, the other of the second and fourth, as well as the Soviet BTR-60П. This system ensures the machine “survivability” even in case of failure of one engine. To move through the water, this amphibian has two propellers, installed control system tyre pressure on the move; for the first time on machines of this class used pneumatic suspension of all wheels.
In England by the firm “Elvis” built a three-axle amphibious vehicle “, stolat” (Fig. 7) with a lifting capacity of 5 tons, with all-wheel drive. It has a carbureted engine with 220 HP, five-speed transmission, transfer case with differential and torque is transmitted to the Central axle and then through bevel gearboxes and cardan shafts to the front and rear axle. Driven wheels front only. Unlike many modern cars-amphibians here used a water-jet propulsion, as in our combat vehicles BTR-60П and BRDM.
Water-jet propulsion (Fig. 8) has great advantages over conventional screw propeller. It has no protruding parts that can be damaged, such amphibian movements in shallow and polluted water bodies. The jet also help in rotating the water wheel. The maximum speed of the machine by land 88 km/h, in water of about 10 km/h From other amphibians, this machine is characterized by high compactness, maneuverability and agility.
Interesting design giant of amphibious vehicle “bark” with the capacity of 60 MT (Fig. 9). Its length is 19 m, a width of 8.3 m, height of about 5 m, it can hold one tank or 200 people. On the sides of this machine (see diagram) installed two engine 165 HP, with drive on both wheels its part and one of the two propellers. This giant with a full load travels on land at a speed of 24 km/h, on water — 13 km/h. Its total weight 89 T. “Bark” is the largest of all amphibians. 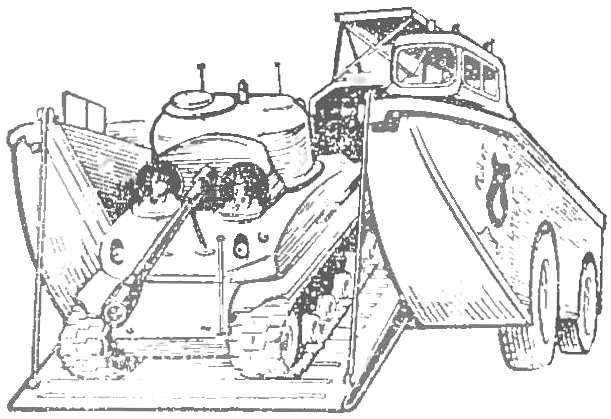 Fig. 9. Amphibian-the giant bark: a General view and diagram of the device.

Fig. 11. Floating car “Flying duck” hydrofoil.
In our country amphibious BAS still makes a significant contribution to scientific expeditions, sailors, doctors, and based on them built, and even fire truck. Well proven tracked floating all-terrain vehicles GAZ-46 GAZ-71. Latest technology meet and the floating fighting machine: the four-axle BTR-60П, armored wheeled vehicle BRDM and BRDM-2.
However, the design of floating machines created according to traditional schemes do not allow to reach high speeds of movement of the water, as required by modern conditions.
To overcome this deficiency was called to another class of the floating machines — Planing amphibious vehicle. The bottom they have a special form, at a certain angle to the direction of movement, that when it reaches a certain speed allows the machine body to be raised above the water to glide over its surface. Losses on overcoming of resistance of water is much reduced and the speed increases. The us experienced a planing amphibious vehicle LVW-X1 “Sea horse” (Fig. 10) with a gas turbine engine producing 1500 HP can move through water with a maximum speed of 56 km/h Water propulsion are two of the propeller; in order not to create resistance to movement, the wheels are raised above the water.
The designers of amphibians have turned to the use of long-known hydrofoils, proposed by one of the Russian inventors in the late last century. 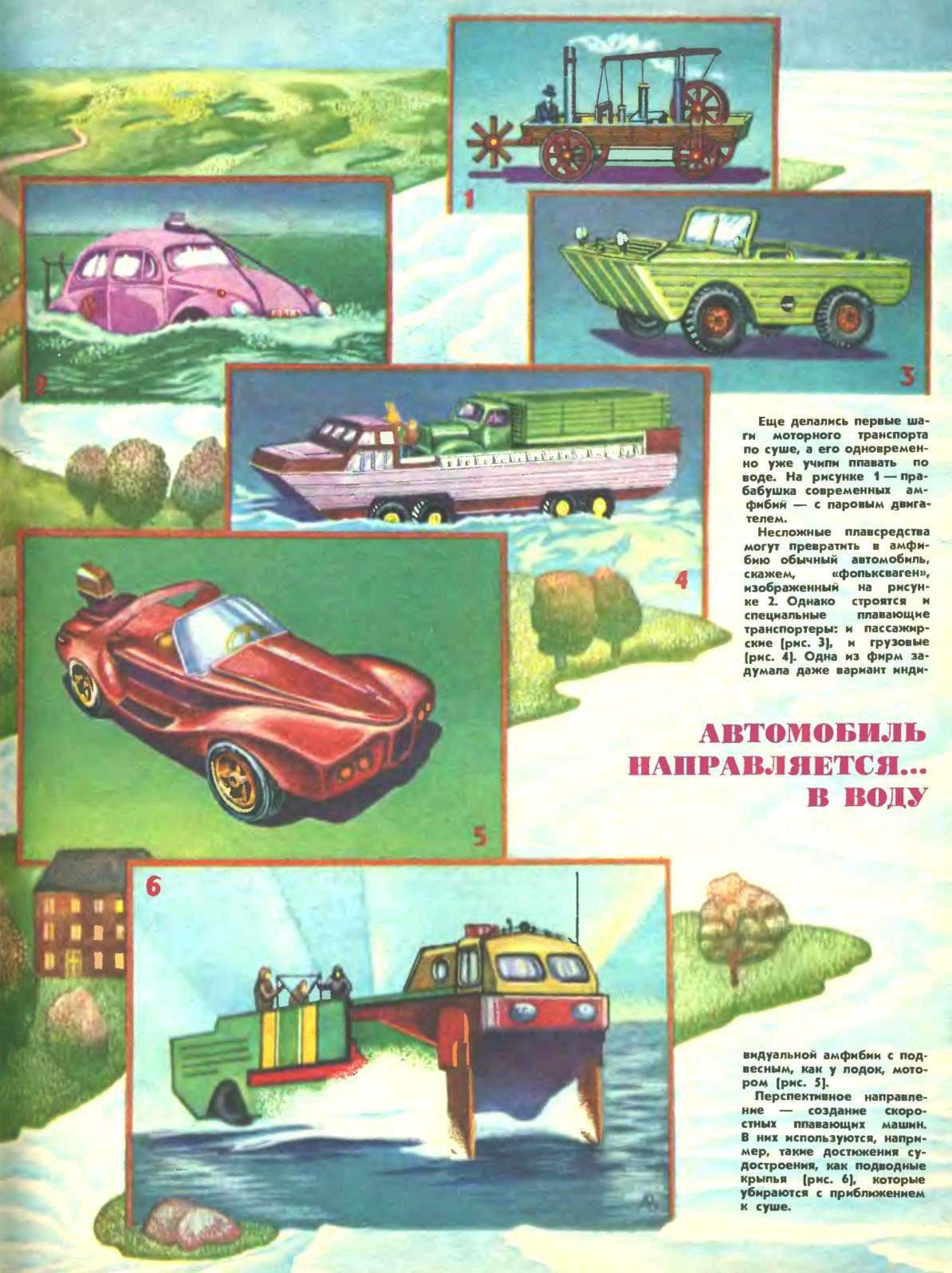 The wings were set, for example, amphibious DUKW, military, dubbed the “Flying duck” (Fig. 11). It is fitted with completely immersed wings — front and back.
Instead of the old gasoline engine 90 HP with a gas turbine 860 HP, With the full weight of the machine 13 tons maximum speed through the water reaches 55 km/h exit to the wings occurs at a speed of 22 km/h. When driving on land the wings are removed.
The fastest floating among foreign cars became an American boat-amphibian “hydrophobin” hydrofoil. Her speed on the water with a load of 5 t 72 km/h. When the land front and rear wings are folded and are folded into recesses in the hull while on the water the wheels retract into a recess and closed by covers.
Finally, a further development of cars-amphibians will be the car, already completely out of the water and hovering above its surface, or rather, the cars are on the airbag.
E. KOCHNEV