In two decades of Windsurfing technical equipment of the sport has undergone many changes. Through the efforts of enthusiasts Board sailing from clumsy boats, is a conventional surf surfer with a sail attached, turned into a projectile, embodying the latest achievements of Aero – and hydrodynamics and constructed of materials that previously were used only in aerospace engineering, for example, carbon fiber and Kevlar.
The evolution of Windsurfing was rapid. Still sailing the first generation boards did not have time to become obsolete, as there is a new type of ammunition called “windglider” (from the English word “glide” — glissirovat) and in 1980 received the status of Olympic class (more about it see in “M-K” № 7, 1982). And in July 1986 at the goodwill Games in Tallinn for the first time the country held a race on the shells akvata — new mini-sailboats, designed for high speed driving at planing.
General view of the “equity-370” (the numbers indicate the length of the casing) shown in the figure. Unlike windglider the shell is slightly keeled shape with a concave hull type “gull wing”. The enclosure volume is relatively large, 230 HP Three longitudinal keel and sharp edges of the cheek provide access for planing at wind more than two points (3.3 m/s) For holding the Board in this mode when turns the Board have a characteristic obstruction along the entire length of the housing.

Case “aquati-370”:
1 — deck, 2 — jaw, 3 — line maximum width, 4 — groove adjustable steps, 5 — mast, 6 — centerboard, 7 — lucky fin, 8 — well under the lucky fin, 9 — auxiliary keel (longitudinal redan), 10 — svetovy the well 11 — the bottom.
To ensure stability on the course when gliding along the ridges of the waves, akvata equipped with a lucky fin of increased area. The latter is able to move along the length of the aft Board, so you can choose its optimal position.
Narrow profiled high aspect ratio centerboard is mounted on a hinge, and may take any intermediate position from fully lowered to completely retracted in the casing. The mast is attached to the movable steps that allows the athlete to adjust her position during the race, if this requires a change in the wind direction. The height of the mast can also be changed in the range from 4930 to 5300 mm, with adjustable spur and a removable top. 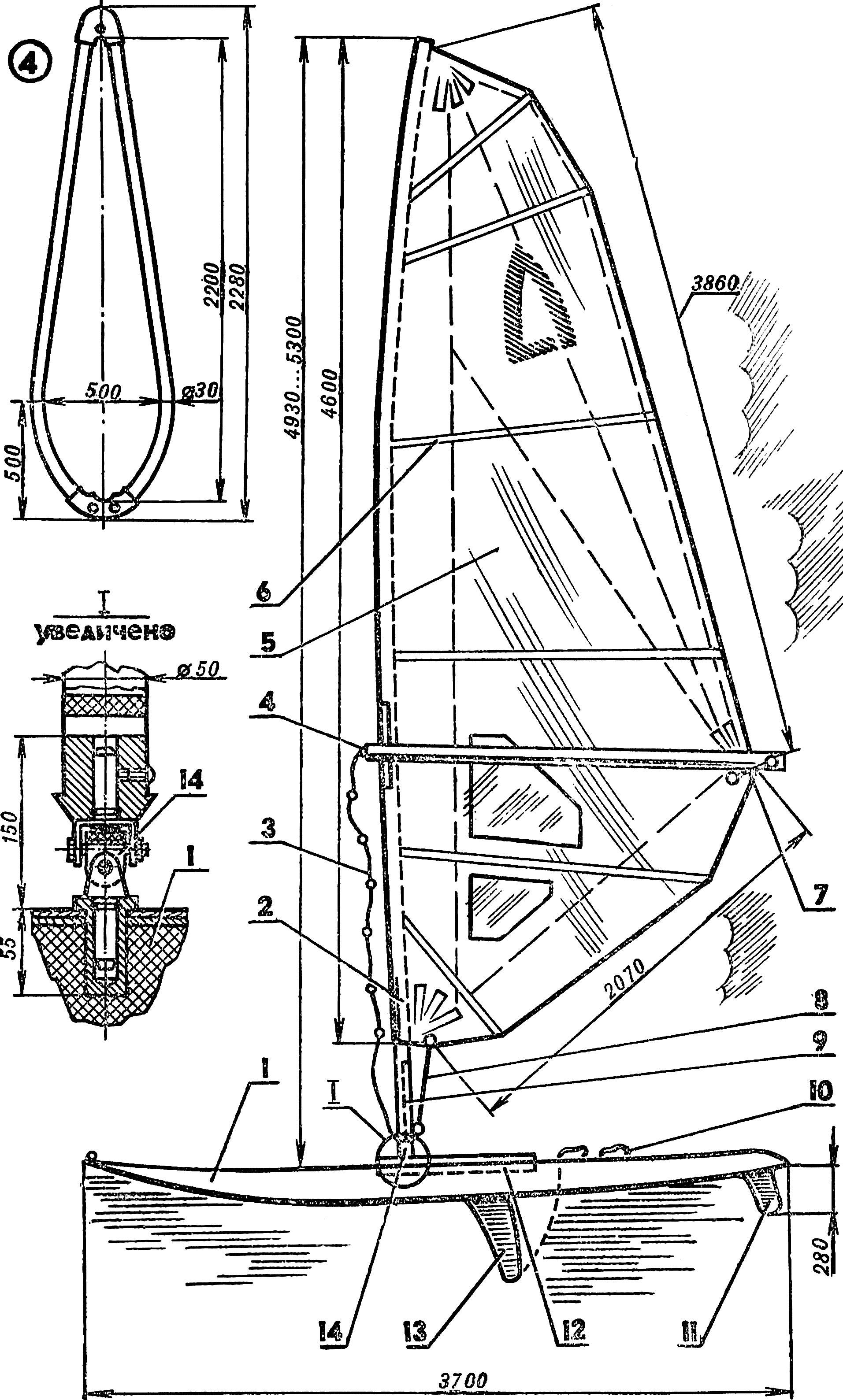 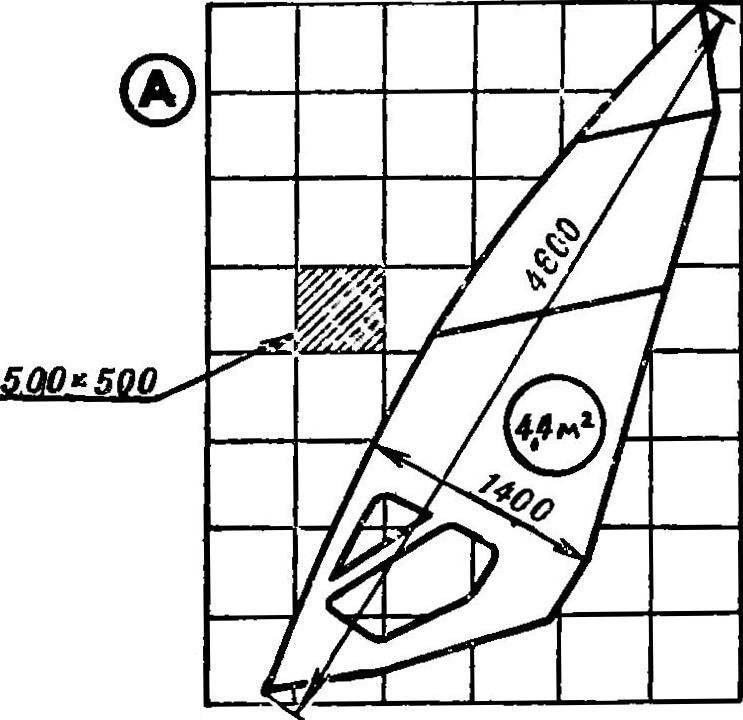 The dimensions of the sail of the windsurfer type “fan” 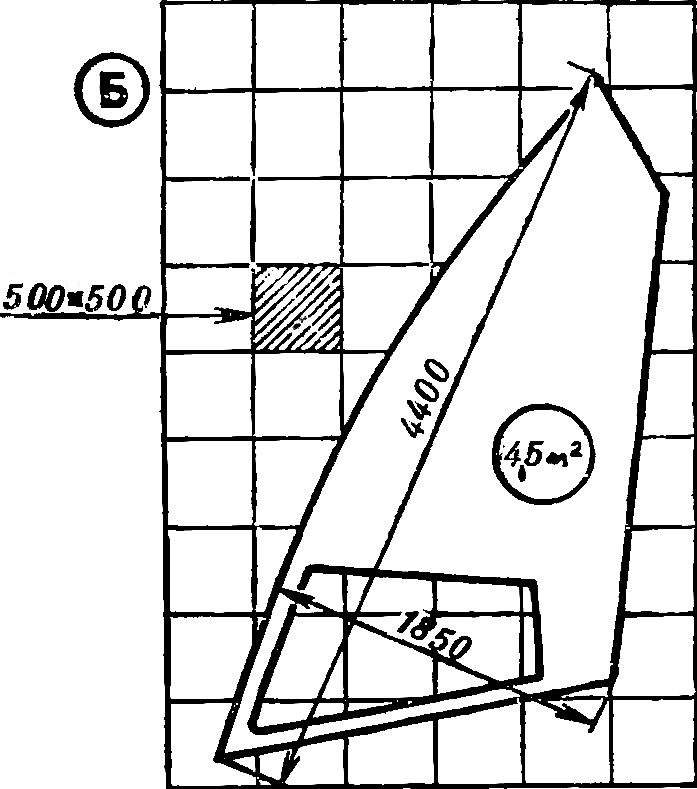 The dimensions of the sail of the windsurfer type akvata
Options special sails for boards of type “fan” (A) and akvata (B).
When you create a “equity” West German manufacturer has used the latest technology. The body shell consists of several layers: outside — the decorative layer with the additives of coloring agents; and under it is a layer of fabric of polyamide fiber Kevlar, perceiving compressive, tensile and shock loads; followed by rigid foam — filler “sandwich”; the last layer provides the overall stiffness of the body, a longitudinal strip of carbon fiber impregnated with epoxy resin.
When Vileika “sandwich” shells of the deck and the bottom between them is laid with polyurethane dummy, made in accordance with the contours of the body minus the thickness of the outer shell. To improve the adhesion of the soles of special shoes of the athlete with the deck last covered foamed polyurethane varnish.
Of course, to replicate the technology the manufacturer “equity” in Amateur conditions is practically impossible, however, to use some applied the principles it is quite real. For example, wishing to make a sailing Board new type with their hands can be recommended to be applied to the wall in a matrix shell in the form of a sandwich using rigid plastic foam. How to make a master model and a matrix to veclachi the body of the windsurfer was described in the “M-K” № 7, 1982. And the most effective way to vyklicky housing by vacuum molding, cited in the magazine “Boats and yachts” (see No. 2, 1985).
To increase the overall stiffness of the hull in it when gluing the deck and bottom shell put two lubricated epoxy longitudinal spar, carved out of solid foam to fit the internal cavity of the housing Board.
Pivoting centerboard is advisable to make on the recommendations of the journal “Motorboats and yachts” № 3, 1981.
“Akvat-370” equipped with sails of different sizes. At the goodwill Games in two sails: 5.8 and 7.0 m2. Sail have through armor made of fiberglass. The front part is sewn from a heavy Dacron, and the back of the Mylar — composite rare weave, coated on both sides with lustrous translucent film.
In race conditions the sail can be adjusted with the help of hoists with dvuhskatnye blocks on the aft end of the boom (to adjust the sheet angle) and on the bottom of the mast (for guy the tack corner of the sail).
Due to the comparative complexity and relatively high cost of the sailing Board type akvata designed especially for athletes of the highest caliber. So for Windsurfing no less attractive are more simple and lighter boards that are designed for competitions in extreme conditions — in a very fresh wind, a breaking wave. Abroad they are called “fan”, which translated to English means: “game”, “fun”. When the Board length is 2.6…2.9 m case “fun” is only 75…90 l (2.5…3 times less than the “equity”). In light wind the small craft of this class can not withstand the weight of the athlete and immersed in water. However, with winds of 4-5 “fan” enters the planing and can develop huge speed. It is on this type of Board with a sail area of 4 m2 in July 1986, set a new absolute world speed record under sail Frenchman Pascal Maka — 71 km/h (38,86 node). Note that the previous record belonged to an 18-metre catamaran “Crossbow-II” with a huge sail area — 130 m2! 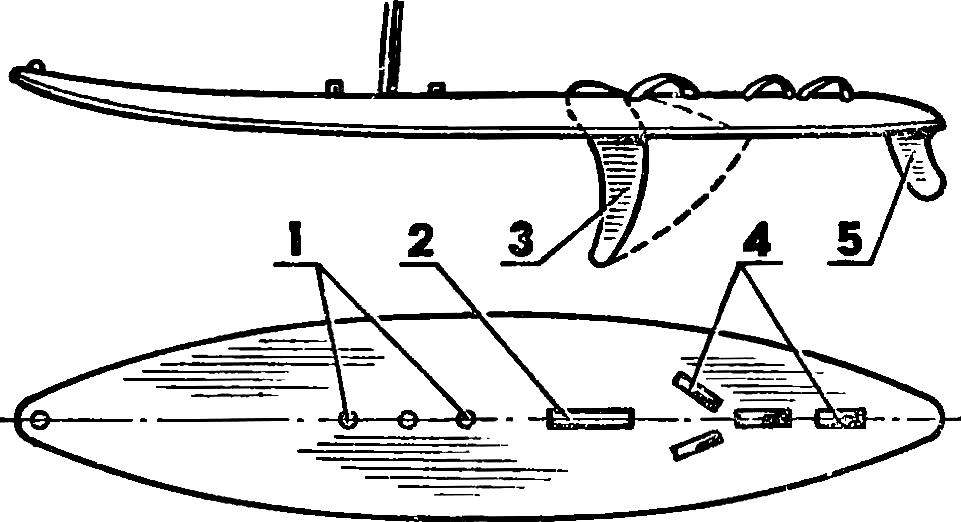 The scheme of stacking layers of the “sandwich”:
1 — matrix, 2 — decorative layer, 3 — layer fiberglass, 4 — plate solid foam.
Create sports equipment for the extreme conditions demanded from the designers of great ingenuity. One of the major challenges was to ensure stability. At higher speeds, wide poop Board, facilitating the planing, creating excess buoyancy, causing the so-called “delfinariu” — longitudinal rocking of the body.
In addition, at high speed to feed the fin from the surface broke through the air, causing any cavitation that reduces the stability on the course. To reduce unwanted area in the stern, on the boards of type “fan” the maximum width of the slip closer to the bow and stern saugiau. Decreases and the total wetted surface of the body, which also helps improve speed.
In order to reduce risklevel in the stern set of two to four fins with a larger total area, so it is possible to go at the rate of the wind (cool wind) with no centerboard. Sometimes profiles make asymmetrical fins relative to the centerline of the Board, which increases its mobility. The athlete, creating a roll on a particular side, it can rotate, without resorting to the manipulation of the sail, as it is necessary for the average rider, not losing thus the speed. There is another method of increasing the stability of the creation aft of the bottoms of longitudinal grooves — tunnels or keeled hull type applied on the “akvat”.
To facilitate the management boards of the type “fan” in heavy seas, when she jumps in the air from wave to wave, on the deck installed a few pairs of knife straps.
Often at high speeds, the athlete is forced to move to the stern and strongly tilt the mast back because of what sheet angle the sail begins to “samyutta” wave. Therefore, “fans” using special sails with a cropped rear part. In the vertical position of the mast sheet angle the sail is raised up, however, in steady planing geek takes a horizontal position, more comfortable in this tense situation.
In the manufacture of a windsurfer type “fan”, it is advisable to apply the technology that we recommend for “equity”. All about creating sailing boards and sails to them our journal has repeatedly said (see “M-K” № 6, 8, 9, 12 in 1980 and 7 in 1981).
In conclusion, it should again be recalled that the new generation of sailing boards is designed for athletes who are already well mastered normal windsurfer.
N. SHERSHAKOV