In recent decades, the pollution and poisoning of the waters of the World ocean reached unprecedented proportions and has increased so much that there is an urgent need in creation of special technical means for oil collection from water surface.
In the Soviet Union at the first stage of the struggle for the protection of the purity of the sea in the black sea, CPU KB the Ministry of the Navy was established the country’s first port, and then RAID the oil skimmer (Fig. 1, A). Now in our ports has been working for more than one hundred neftegazonosnosti of this type. Stripe trawling with them for about 3 m. In the Baltic ports successfully employed special bots (Fig. 1, B), is designed to clean port water areas from petroleum products and debris, a band of trawling to 15 m and a productivity four times higher than that of other similar bots.
Work existing neftegazonosnosti based on the absorption of the water layer floating on the surface film of oil. It is pumped into a separation device on the vessel by the pump. Together with film is transported to the water layer, the thickness of which is equal to the diameter of the feed screw or suction nozzle. The efficiency of skimmers is very low and the scope is limited.
The weak point in the design of these mechanisms — trawl device made in the form of “whiskers” of metal plates. Increasing the length of the ‘whiskers’ leads to increase of hydrodynamic resistance and loss of maneuverability. 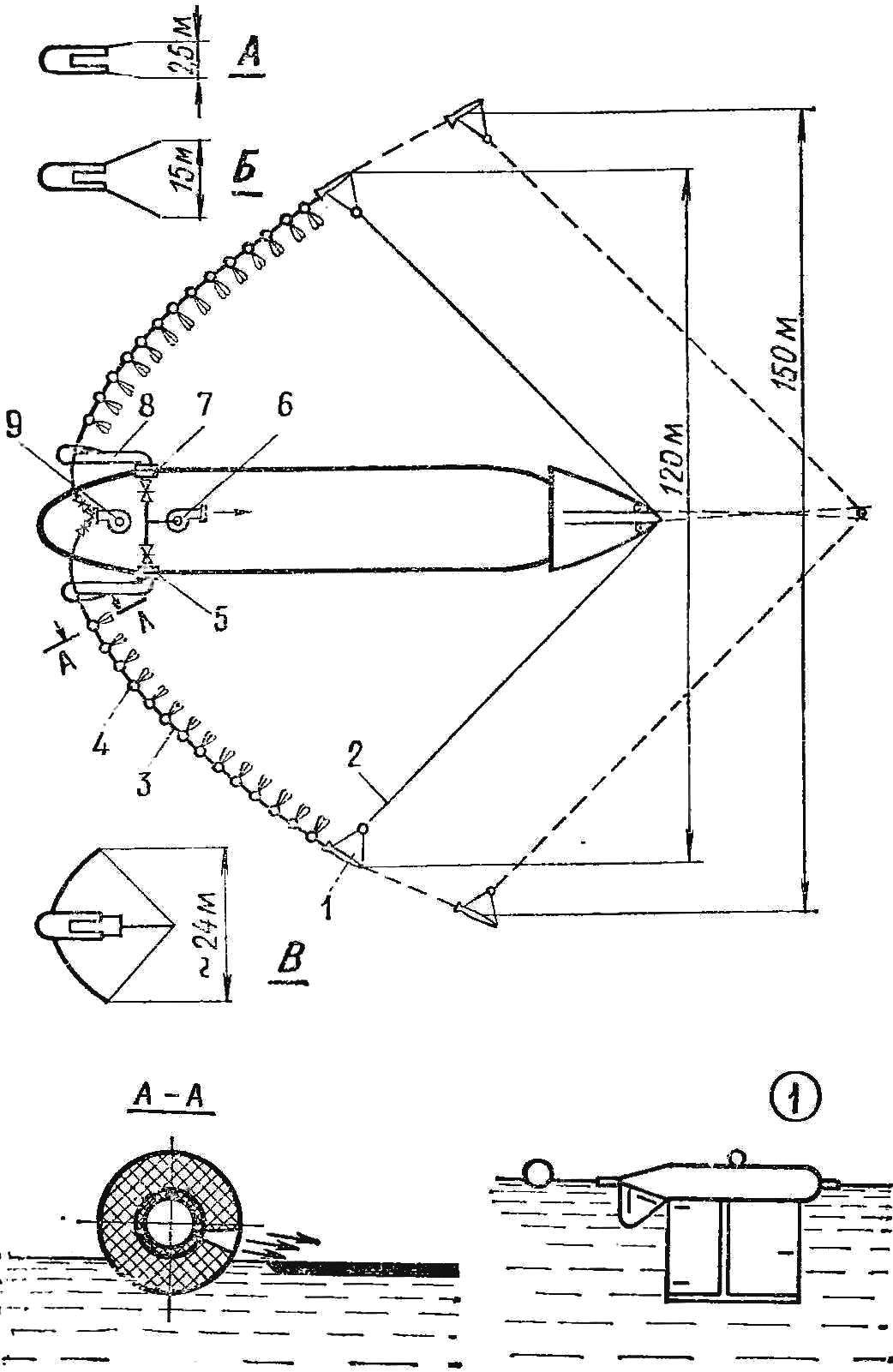 Fig. 1. The scheme of the skimmer:
1 — the spacer buoy 2 — rope 3 — the sleeve of the trawl, 4 — float with nozzle, 5, 7 — suction device, 6 — pump, 8 — neftezavodsk, 9 — compressor; A, B — scheme of the existing Neftegazodobycha, In the variant of modernization.
However, existing oil skimmer maintains the required purity of the waters of the ports of the Soviet Union.
Today, however, the next stage of the protection of the environment is not only clean the coastal zone, but the waters of the seas and oceans from floating at the mercy of the winds and currents mnogomernyh oil carpets. They kill fish, algae, marine animals, disrupt the exchange of heat, moisture and gases between the ocean and atmosphere.
Every year at the sea surface results of up to 5 million tons of oil, and the dispersion of this film is very slow. Pollution of the oceans has been recorded even by hardware of space satellites.
The danger and consequences of poisoning of the waters has led to the fact that last year entered into force the international Convention on civil liability for damage from oil pollution.
Now the courts permitted to enter ports and leave them, regardless of departmental affiliation of the fleet, if they are transported as cargo, more than 200 tonnes of oil and have no security against contamination, as required by the Convention.
I suggest hitch (see Fig. 1), which can be used in enclosed large bodies of water and in the open sea or ocean. Almost any sea or river ship and lighter or bunker barge can be armed so the “oil trawl”.
Its main working body — flexible hose with floats, arc, stretching into both sides of the stern of the container. In the sleeve of pressurized air produced by the nozzles (Fig. 2), mounted at an angle to the water surface. One end of the sleeve is connected to the intake device, and the other with the spacer buoy and tow rope attached to the bow of the vessel.

Fig. 2. Section of float with adjustable nozzle:
1, 2 — half of the housing of the float foam, 3 — ballast (for stability), 4 — gasket, 5 — adjustable nozzle, 6, 7 — nut and screw for nozzle adjustment, 8 — sleeve.
This attachment device has its own distinctive features and benefits. And first of all its buoyancy, and hydrodynamic trawl opening device: that is, bringing it to its working position just under the influence of the oncoming flow of water during movement. This provides a strip of trawling from 1 to 1.5 the length of the hull (see Fig. 1).
Moving and collecting oil on the water surface is carried out by exposure to air (or hydraulic) of the veil (Fig. 3), and “towing” — in a special drive over the ship’s side or in his tanks.
As the trawl moves through the water surface, it has a relatively small hydrodynamic resistance 150-250 kgf at a speed of three knots, provides increased rate of stroke up to six knots, and the ability to withstand sea state up to four points.
How does the sea “the janitor”? While the vessel is under a counter flow of water removes from the sides of the spacer buoy — derived hydrodynamic trawl opening. The air supplied from the supercharger supplied through a flexible hose into the nozzle. Dripping from them, the jets form a curtain which presses the layer of oil in the intake drive. Here it can be pumped by the pump in the tanks.
A modern tanker hull with a length of 150-200 m, armed with a hinged cleaning device can have a strip of 200-300 m. trawling in the Existing port and offshore oil skimmer with a bandwidth of only 3.5 and 15 m by means of pneumatic trawl can increase the width up to 20 m or more (see Fig. 1). 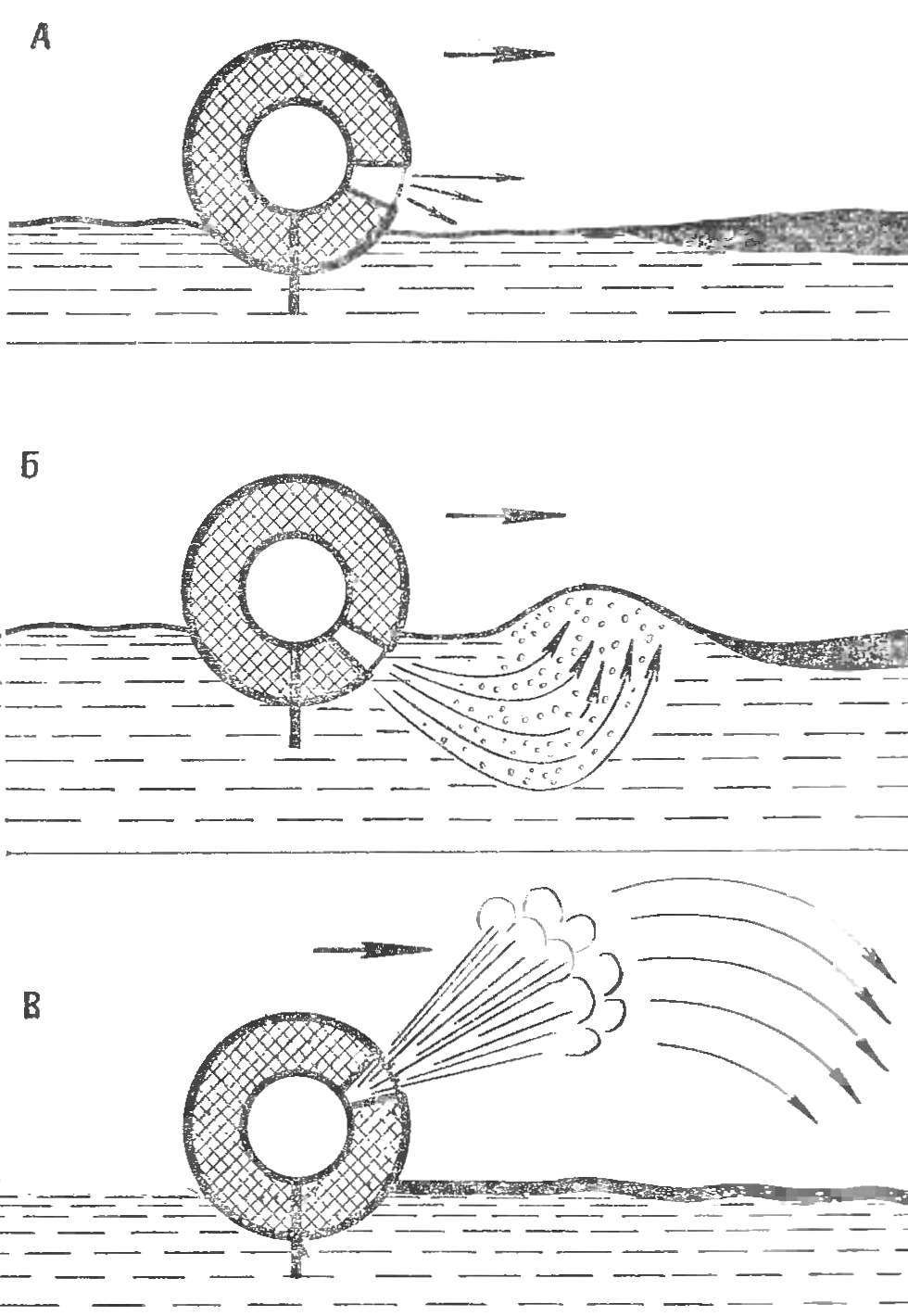 Fig. 3. Three working position of the nozzle:
A — when creating an air curtain in front of the trawl. B — education bubble water / air barrier, In — atomization of chemical preparations on the surface of the oil.
Expansion band sweeping can be accomplished as follows: in the bow of the vessel is installed the retractable shot — a kind of bowsprit, is approximately equal to the length of the body. The shot fasten towing cables with spacer plates and a flexible sleeve. For internal areas the installation of nozzles is probably not required.
The increase of the band trawling from 3.5 to 20-25 m will provide passeia performance collecting oil 5-6 times, equivalent to the commissioning of the additional at least several hundred new oil skimmers, similar to existing.
Currently, this marine “the janitor” has never been implemented. The author made a working model of the trawl-skimmer with a swath of 2 m remains untested. Reportedly, similar devices in the USSR no one available. At the same time, the threat of the impact of ocean pollution and our indoor pools remains relevant today.
SAVITSKY
From the editor: We appeal to the committees of the Komsomol ports and interested organizations, to all the innovators, to everyone whose soul burns creative spark: you must help the inventor. V. A. Savitsky made the first steps. Now it is time for young innovators, participants in the movement NTTM: involved in the operation of the “Implementation”!
Recommend the invention To Savitsky for display at the VDNKH in the pavilion “environmental Protection”.