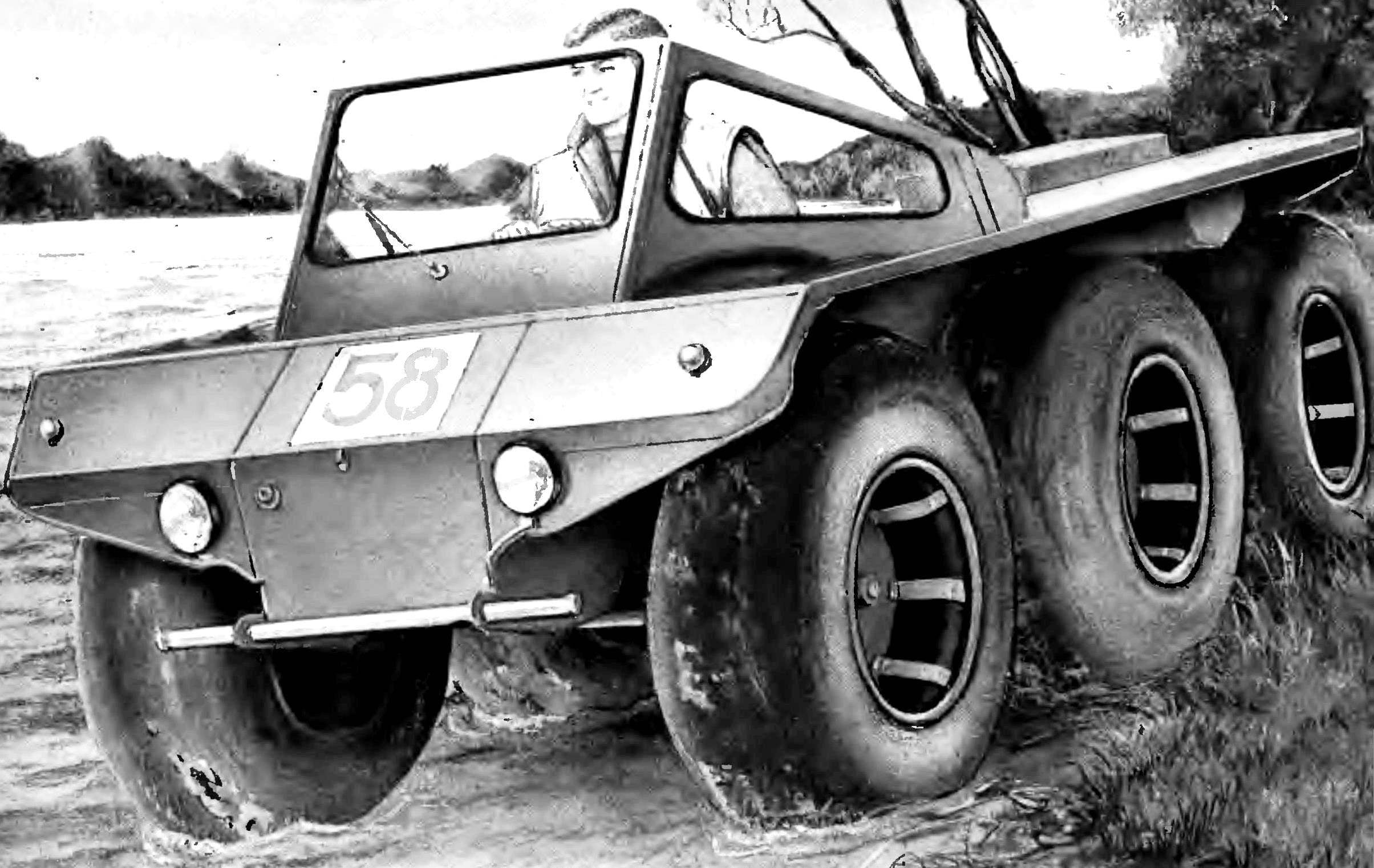 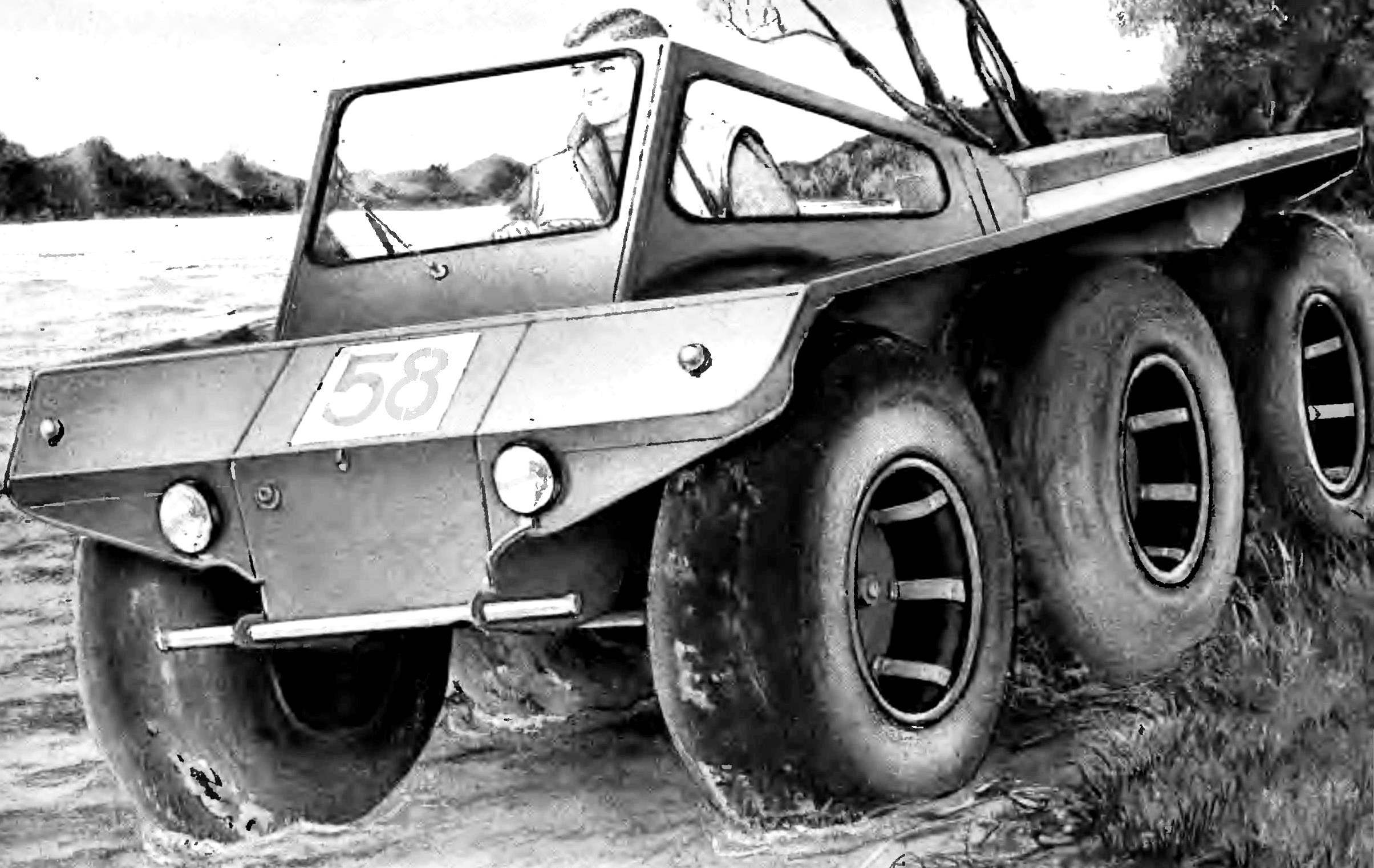 Participants and guests of the all-Union review-competition of self-made ATVs in Arkhangelsk were surprised to find that in the city there is a whole Amateur “industry” for the manufacture of such machines on the low-pressure tires. And the scale of it so large that it can only be explained by a rare combination of factors such as the availability of the industrial base, proximity to nature with its roadless spaces and a large number of enthusiasts. Characteristically, acquire pneumatic-tired machines and townspeople, and villagers: for travel on fishing, hunting, mushrooms and berries. Consider also that for some it is the only vehicle suitable to local conditions.
In recent years, the majority of the Arkhangelsk designers-Amateurs tend to believe that the most efficient layout, the six-wheeled, four-or all the leading Pneumatics. This vehicle has better maneuverability, both in winter and in summer, it can overcome water obstacles, leaves after the passage of the deep tracks, safe when driving on thin ice.
Well, more specific characteristics of the vehicle are selected depending on requirements claimed by her designer: will he ride alone or with passengers; what goods will be transported (this will determine the size of the body); what area is supposed to operate the machine; the nature of possible obstacles (depends on the number of wheels and even the track width: it is desirable that it coincides with a track of trucks); are there any plans to make a floating all-terrain vehicle (related to this is the location of the center of gravity of the machine); and, of course, the level of comfort: if the vehicle is to be equipped with a warm cabin, you will have to lay in the design of the heating system. You need to think about a system of starting the engine — starter or manual; whether the battery or can I use magneto, etc.
In the manufacture of all-terrain vehicles the homebrew widely used components, assemblies and individual parts of cars, sidecars, scooters. Excellent results are obtained by the use of decommissioned aircraft — various of gearboxes, bearing assemblies, even cameras for the wheels, which significantly reduces the weight of the cars increases their resource. A variety of materials, which are used by lovers to make frames and bodies: waste steel products, aluminum profiles, pipes, sheets, plywood. There is a particularly preferred methods and build: with the same success using welding, riveting, bolting.
In Arkhangelsk there are several very distinctive “schools” oriented towards the creation of vehicles of certain types.
The closest to industrial design, for reviews Arkhangelsk homebrew, pneumatic-tired machines are a senior researcher Senip V. Ilyin, V. Bazhukova and “shestiklassnik”, Vidyakina.
With pneumatic G. Vidyakina, won a prize at the competition, I want to introduce to the readers. Gennady A. Vidyakin by profession a mechanical engineer. By the nature of the work he was long connected with motor vehicles, manufacturing a variety of transport equipment is engaged in more than a decade. Submitted for the contest Rover — the third on his account, and, perhaps, the most perfect. So, the Arkhangelsk regional Council of VOIR recommended that the Rover G. A. Vidyakina for demonstration at VDNKH in Moscow. The layout of the suspension fairly worked out and designed for maximum use of standard components. G. Vidyakin were in the same and a good designer: it “shestiklassnik” has an attractive appearance, its equipment takes into account the requirements of the SAI, applicable to vehicles. However, on such vehicles not subject to the requirements of the SAI, applicable to a self-made cars, so they are not recorded. However, they are allowed to operate by setting out similar machines from city-specific routes and time.
The basis of the vehicle G. Vidyakina is open-topped box-shaped body shape. Vertical boards — plywood with a thickness of 7 mm, at the upper edge of the sides attached wings, forming a single plane in front made a small bevel. In terms of housing is rectangular in shape with a slightly tapered front part. The body is divided by vertical cross partitions; in front of the trunk, then in the expanding part of the cabin with a steering wheel and driver’s seat behind him on the sides of the two boxes that serve as seats for passengers. Next compartment — transmission compartment. By the way, the drivetrain is covered with a horizontal cover, are at the same level with the seat. And the last compartment — power, closed the horizontal lid, slightly raised above the seats in which is mounted the engine. On the lid there is an additional box-shaped casing under the engine. Covers of boxes, transmission and engine hood recline on hinges, for easy access to the units.

Fig. 2. The steering gear and support the front axle:
1 — support of front axle, 2 — tie rod end joint, 3 — pinion steering, 4 — body, 5 — hinge, 6 — steering column 7 — the tie rod.
Wings, partitions, covers and plywood, coupled with the body dural corners, half of duralumin sheet, from the bottom to the rigidity of riveted duralumin angles. In front of the body under the partition boot made with a small cross in a niche under the front axle. In the rear of the body under boxes-seats and on to the engine compartment, on both sides, both longitudinal niche for balance weights rear wheels. By the way, the rear wheels are as close to each other, front related several forward — from this distance depends on the turning radius of the vehicle.
Over the wings in front of the body inclined installed windshield and two side Windows. Under the wings of each rear wheel with two sides mounted fuel tank, the cross section of which has the form of a narrowing down of the trapezoid. Over all the wheels in the horizontal parts of the wings are made of rectangular cutouts closed by a rubberized fabric: when you hit a barrier that allows the wheels to rise above the level of the wings and not inhibited about them.
The engine and transmission units are mounted on a frame constituting a single whole with the body. It consists of four longerons of steel 40X40 mm angles and cross members of steel pipes of square section. Outside on the sides there are small brackets from the corner 40X40 mm for fixing the supports of beams of the rear wheels. Wherever possible corners of the shelf longitudinal spars trimmed to reduce the weight and nasverlennye holes. 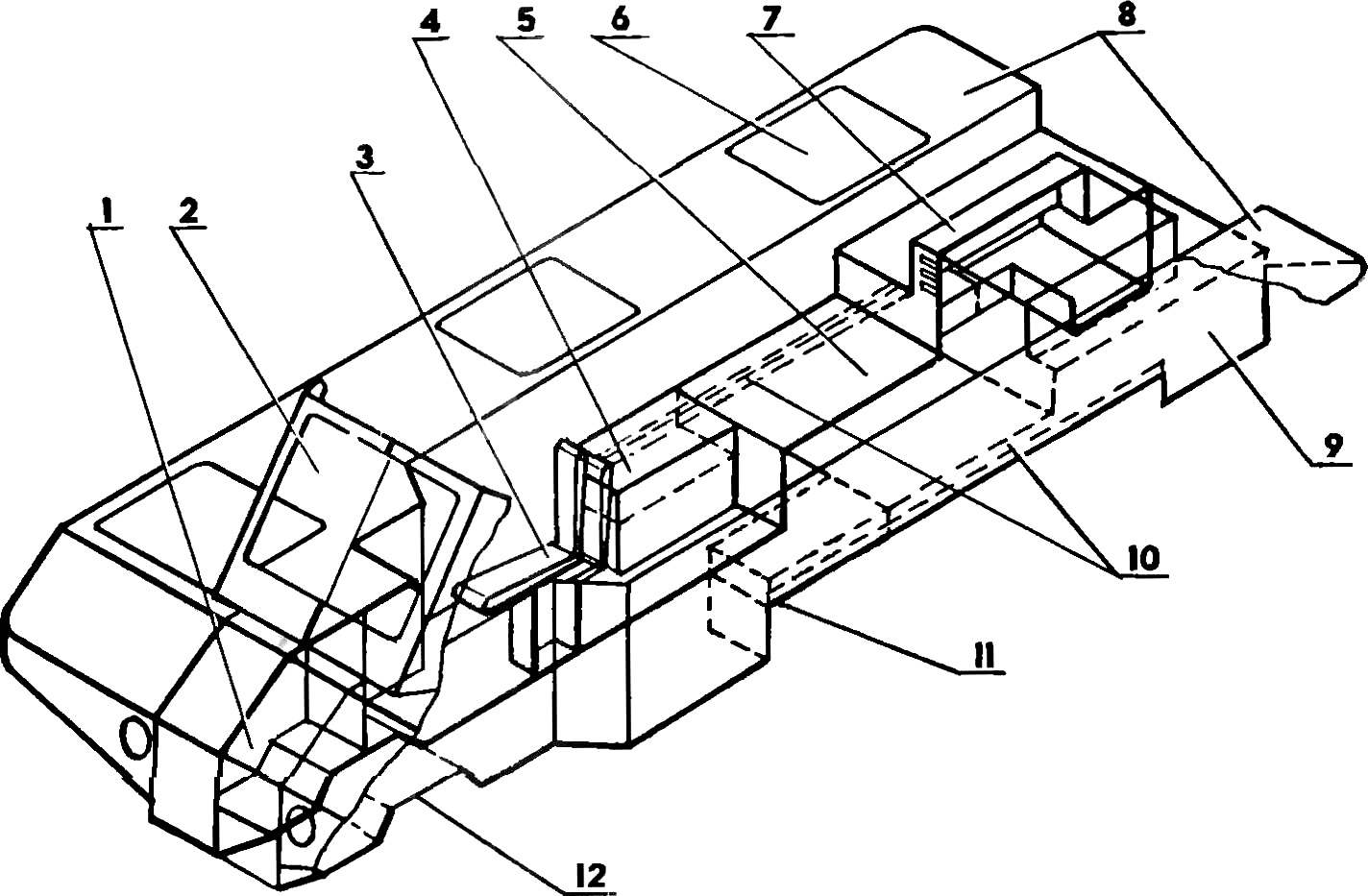 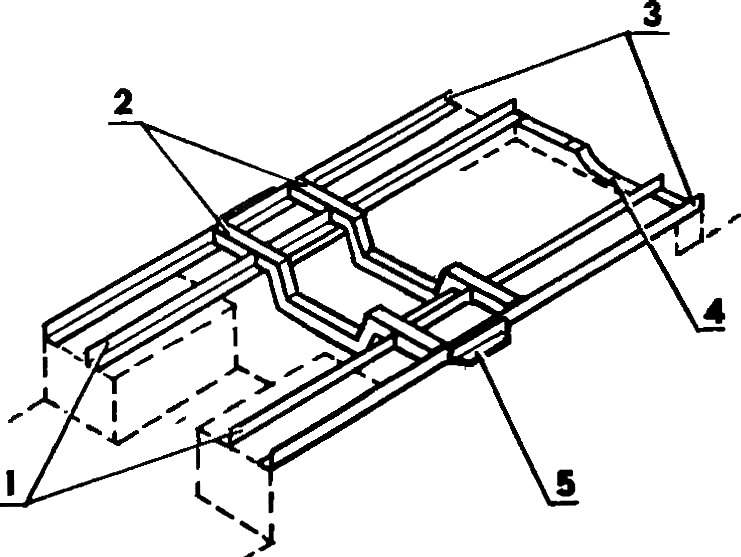 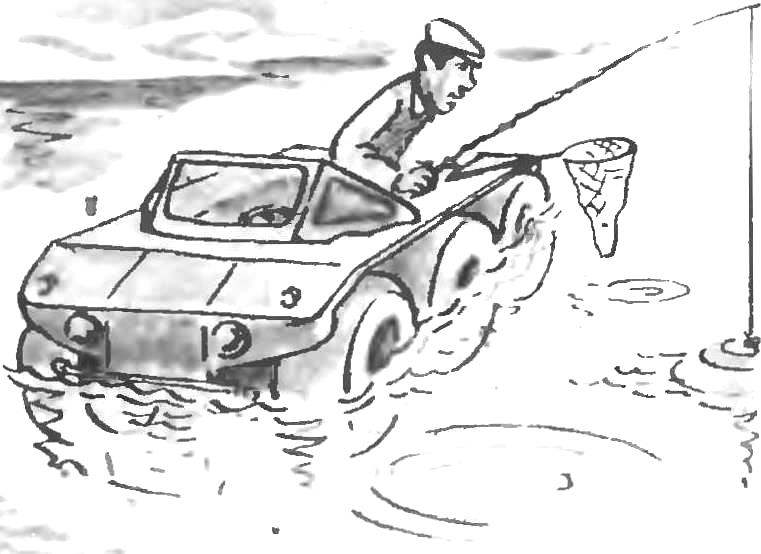 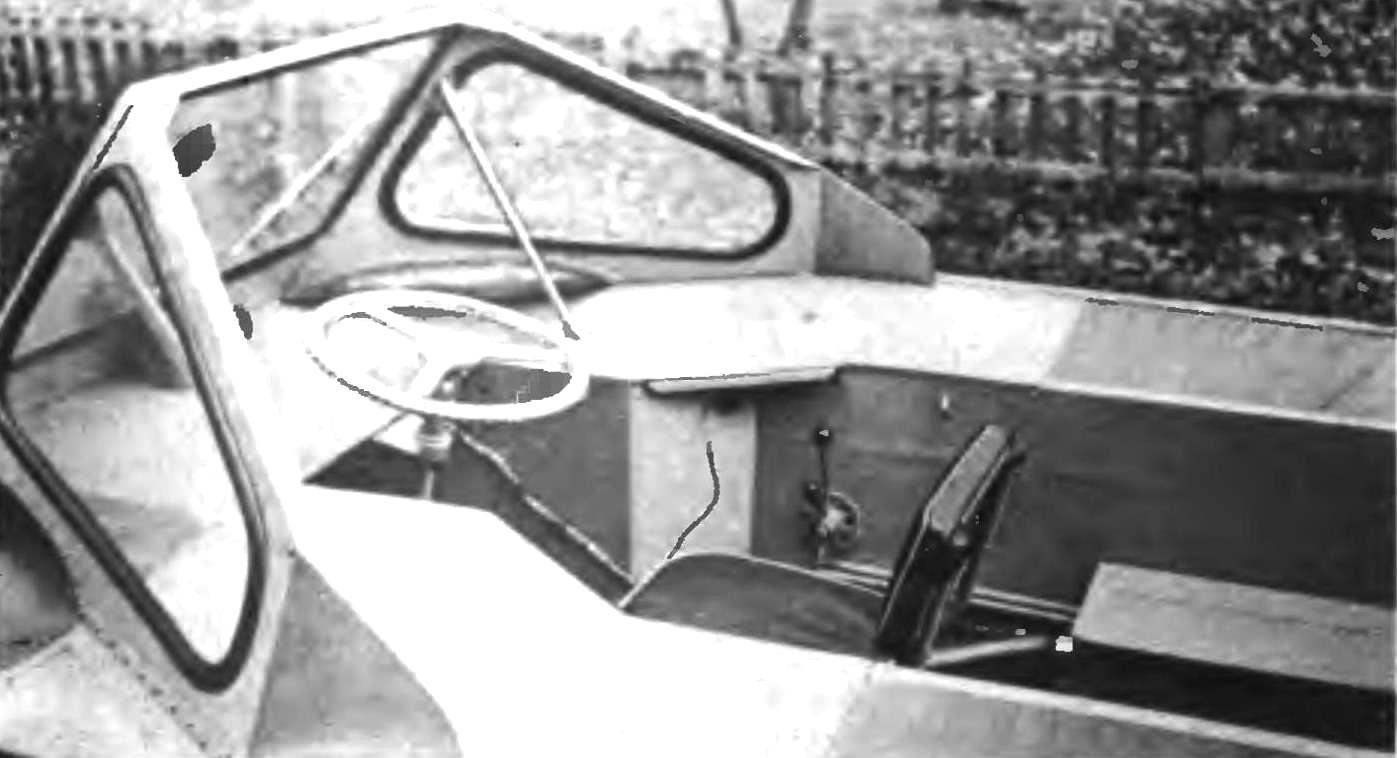 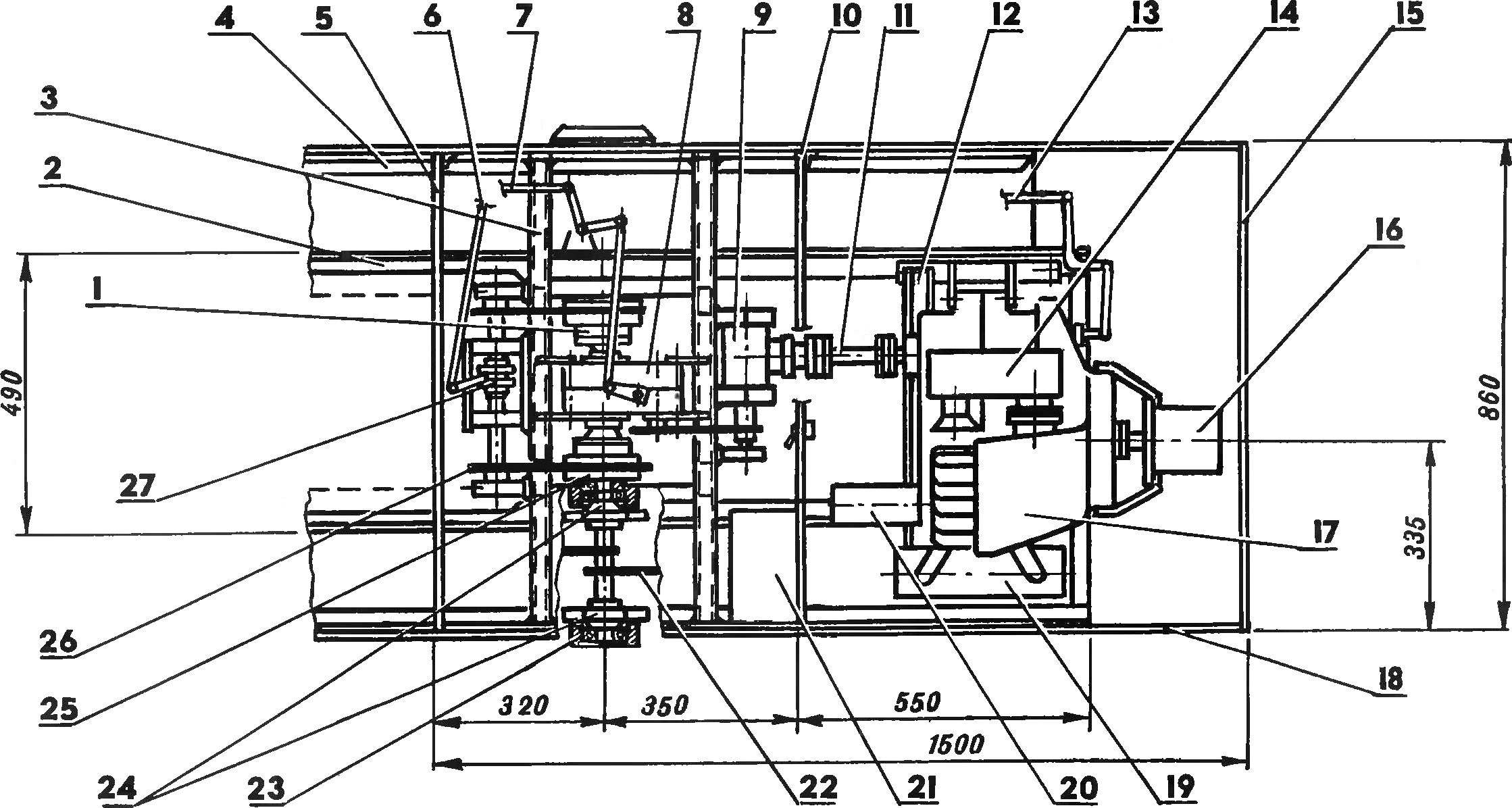 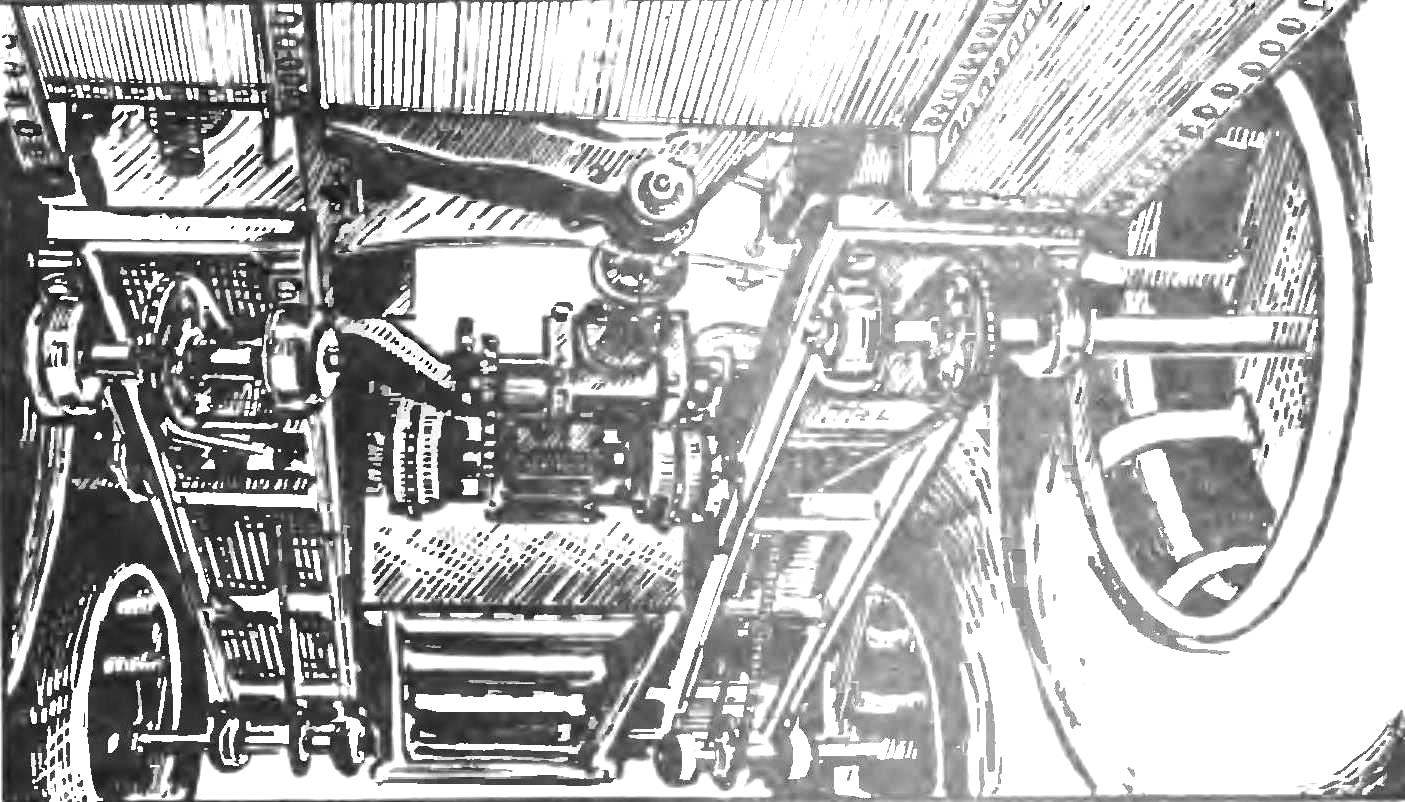 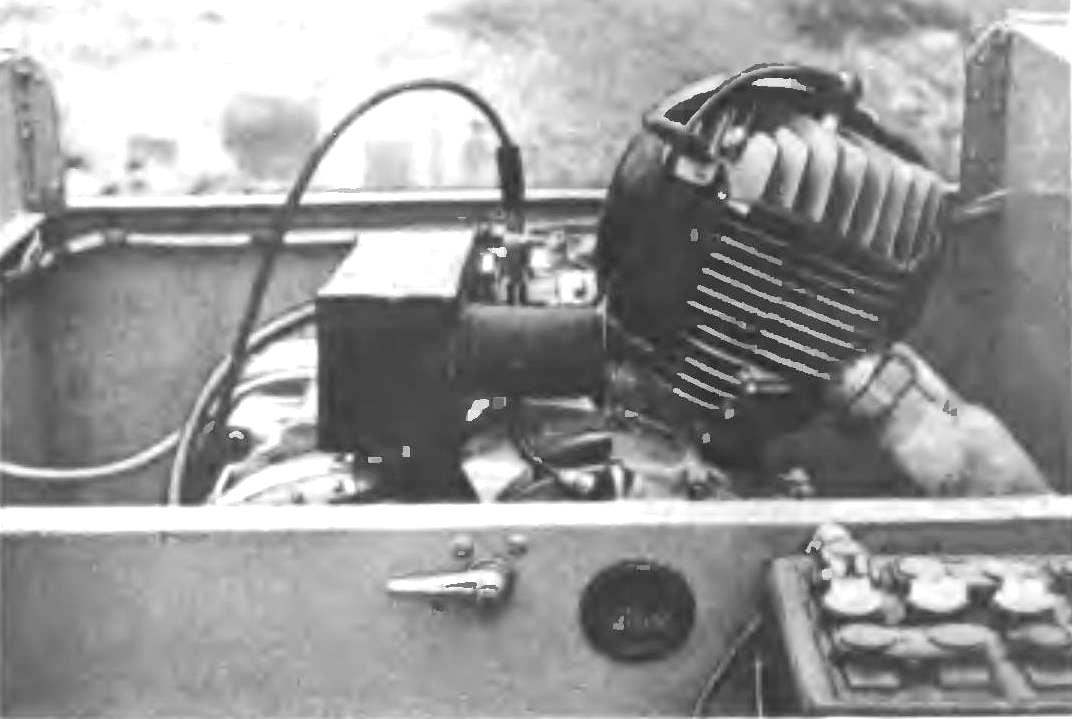 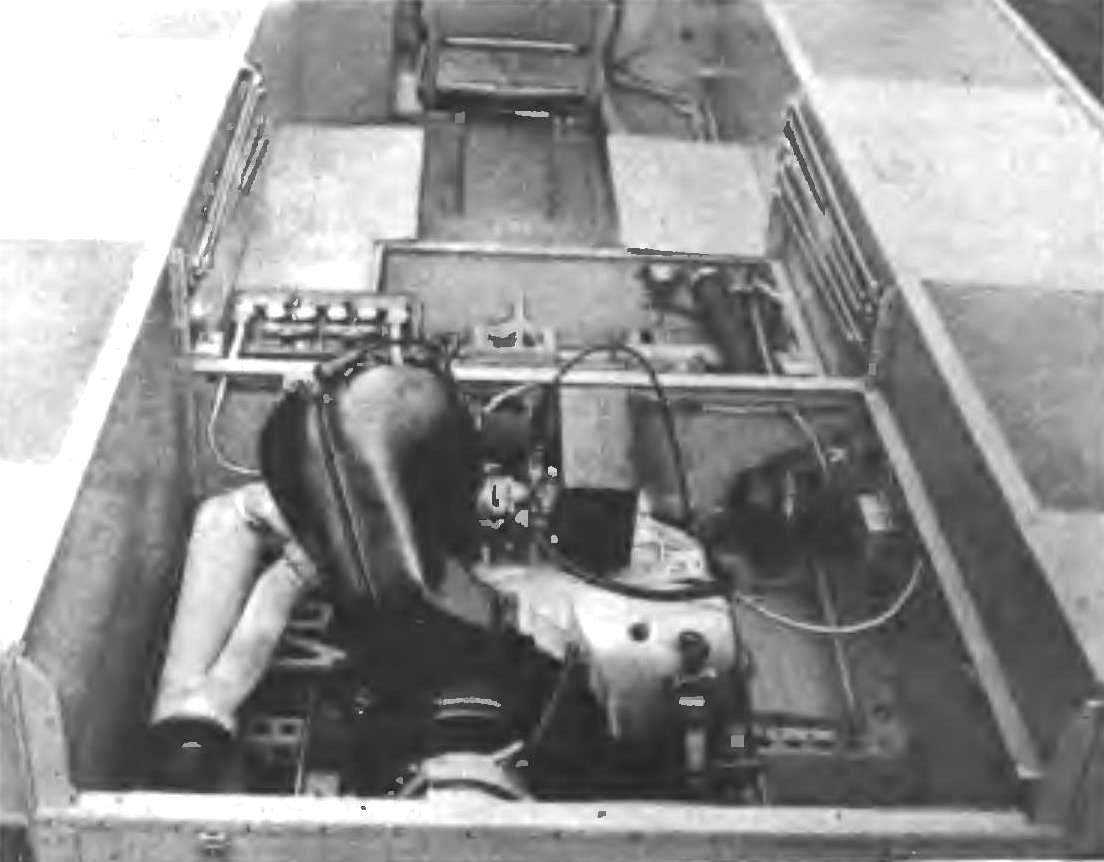 The front axle of the vehicle consists of a steel pipe Ø 60X3 mm, reinforced in the middle part of the welded plate of the same tube. On the axis of symmetry of the bridge he welded perpendicular to the horizontal axis, the ends of which are fixed in bearing supports mounted in a recess of the front end. To the tapered ends of the stand pipes are welded with the pins and the swivel axles of the car “Volga”. Rubber buffers installed on the edges of the niche limit the swing of the axle in a vertical plane. 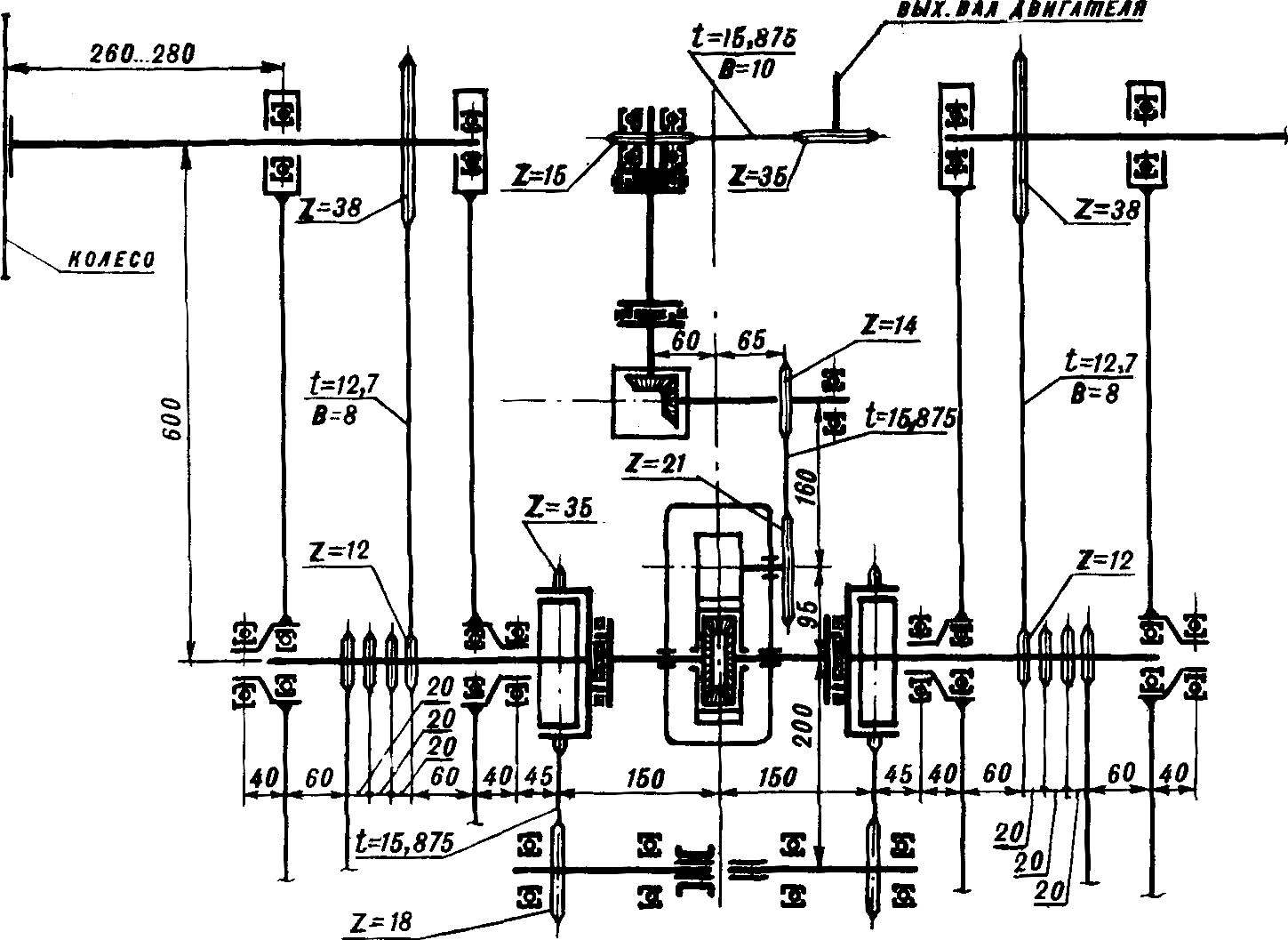 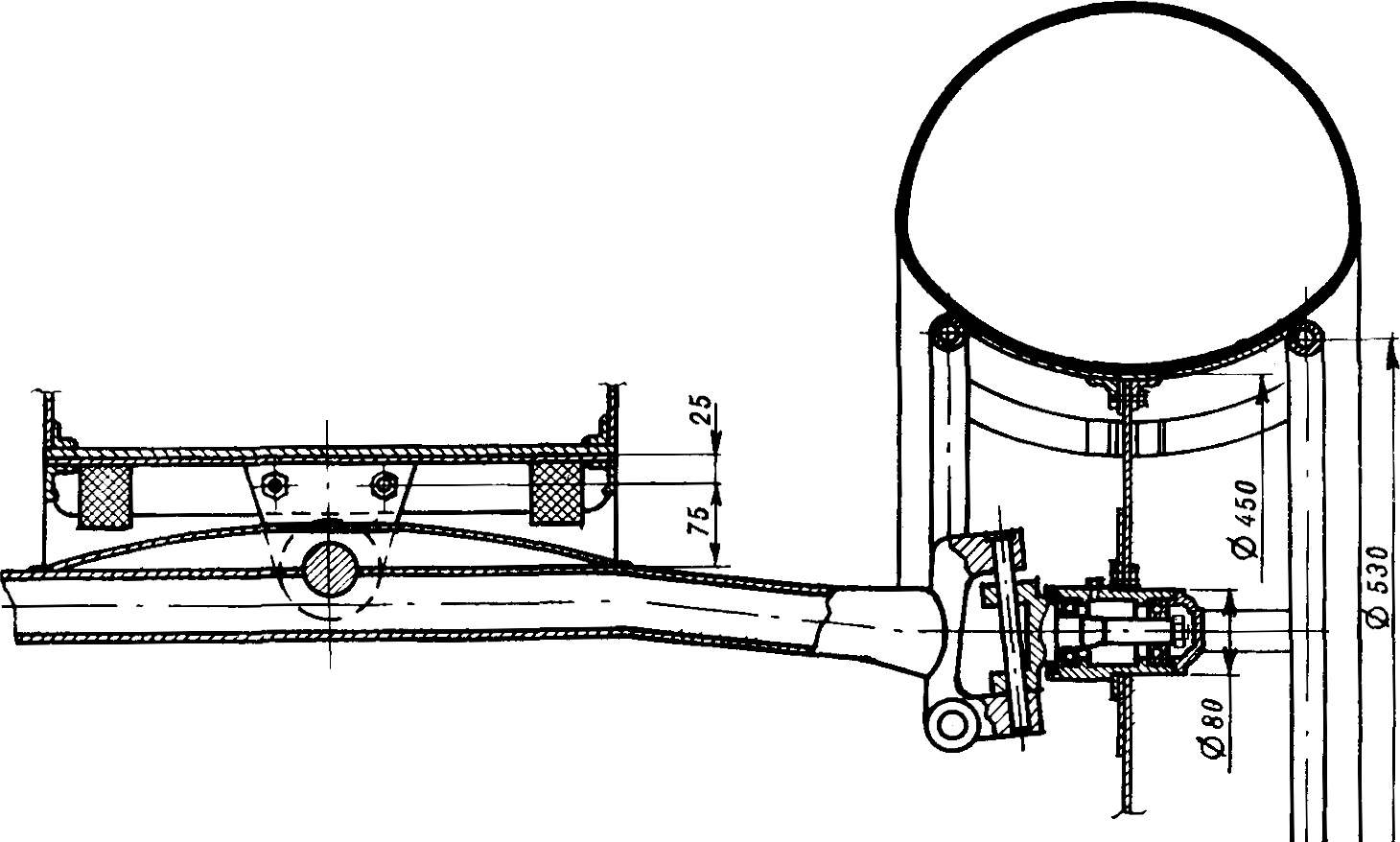 Fig. 8. The front axle of the vehicle.
Steering, as required by the rules GAI, prefabrication, from motorized wheelchairs. Carter with the rail installed under the floor of a body bracket, a shaft the steering wheel is connected to the shaft-pinion through the universal joint, the second (upper) support the steering shaft is bearing mounted on the bracket. Since the steering wheel is in the plane of symmetry of the body, steering rod joints on the rail is offset to one side and thrust differ significantly in length, this leads to the fact that the swing crossbar accompanied by a marked pomadkoy the middle of the wheel.
Balance weights of rear wheels constitute a symmetrical frame, welded two rectangular tube 40X20 mm, connected by cross-beams of the same pipes. The Central pillar of the balance weight is rotated in the axle — bushings, welded to fixed to the frame plates. The support shafts of the wheels at the ends of the rocker — in a similar design. The frame of the balancer several curved, located on top of the axle of the balancer, and the support shafts of the wheels from below, so the axles of the wheels are below the hinges of the beams by 180 mm. the Stiffness of beams is small, under load they are deformed, as well as the frame of the engine and transmission, however, the presence of elastic couplings and the possibility of misalignment of chain drives compensate for this deficiency.
The wheels of the Rover are made from the camera flotation tires 1120X450X380. Tubular rim, the Central disc and the cradle for supporting the camera is made of aluminum alloy. The cradle is connected to the rim by welding, and includes a disk with corners on the rivets. Lodgements split, so that the outer rim was weaned, to the disk it is attached to the bolt. The disc in the Central part of the reinforced riveted plate, to the hub bolts. The valves moved to the side, allowing the camera to rotate on the rim. Leading and driven wheels are interchangeable.
The design of the vehicle is applied to multiple nodes, which can be attributed to casually tucked under the arm. One of them — angular gear box. It can be waived if you place the engine in the longitudinal direction. During Assembly of the transmission and engine mounting all mounting parts were manufactured and customized locally. We used all possible measures to reduce the size and weight of standard components; for example, undercut ledges of the mounting main gear sidecar, made a small muffler for the engine.
Of the control system. Control Rover and the alarm system is completely copy car. Actuators: throttle cable, clutch and brakes — hydraulic gear shift, reverse gear — rods and handles located on Board the vehicle to the right of the driver, there is mounted the control arm differential lock (via thrust). All cylinders are from front wheel brakes motorized.
Power system differs slightly from that adopted on the scooter: on the axis of the crankshaft and the fan motor is mounted on four legs automotive alternating-current generator connected to the crankshaft by elastic coupling.
For windscreen warm air from the engine cylinder through the air intake and pleated sleeve two car fans — the entrance and exit.
O. ILYIN, the engineer of