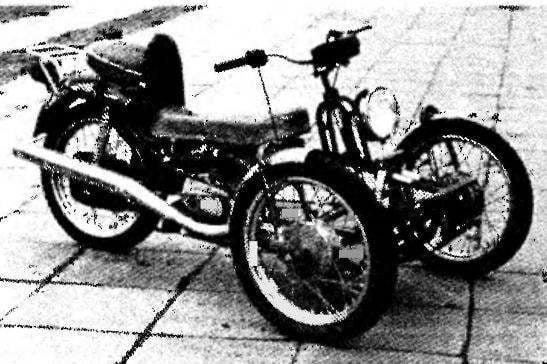 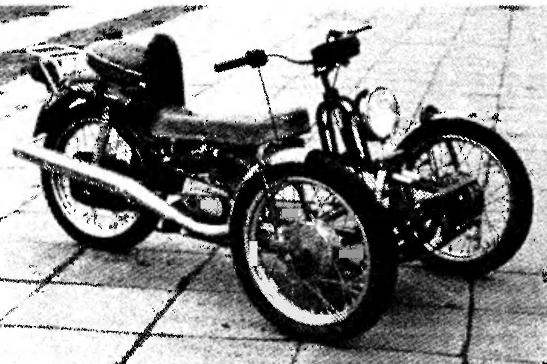 The history of car industry it is known that the first car was three-wheeled crew K. Benz. In the future, with increasing speed, was replaced by four-wheeled machine, the more stable in the turns. However, the designers did not leave the desire to create a three-wheeled chassis of the same resistance. It is constructively easier and lighter with the same capacity, therefore more reliable and cheap to operate.
It is obvious from such considerations came the German company “Daimler-Benz” to design is presented at the end of 1997 at the Frankfurt motor show, this unusual car “life-jet” F-300 on three wheels. Specialists and visitors of the exhibition were trying to guess a car’s or motorcycle? The simplicity of the design, the novelty did approach the motorcycle, at the same time, its hydraulic and electronic equipment has decided the stability in cornering at all speeds, like a car with four wheels.
The emergence of “life-jet” F-300 was not accidental. Improved maneuverability in traffic jams in the cities, simplifying the design and cost reduction — these are the problems that predispose the experts from different countries to work on this type of transport.
When designing your Grechko forest motorcycle (the tricycle), the author pursued a more modest goal – to make it lightweight and weatherproof. Choice of the layout of the scheme was prompted by the experience of operating a three-wheeled velomobiles that in the early 90-ies were made by high school students in the Minsk Palace of children and youth (at that time the author was in charge there of the workshop “Designing biotransport and motosredstva”). Due to the simple design pedal cars proved to be reliable, light (18 kg), given their low speed, stable cornering. So experienced (in the photo), and then the second is modified (in the figure) samples tricycle designed as a recumbent two driven wheels in front and one driving the back. Consequently, there is no differential and complex rear suspension car type. 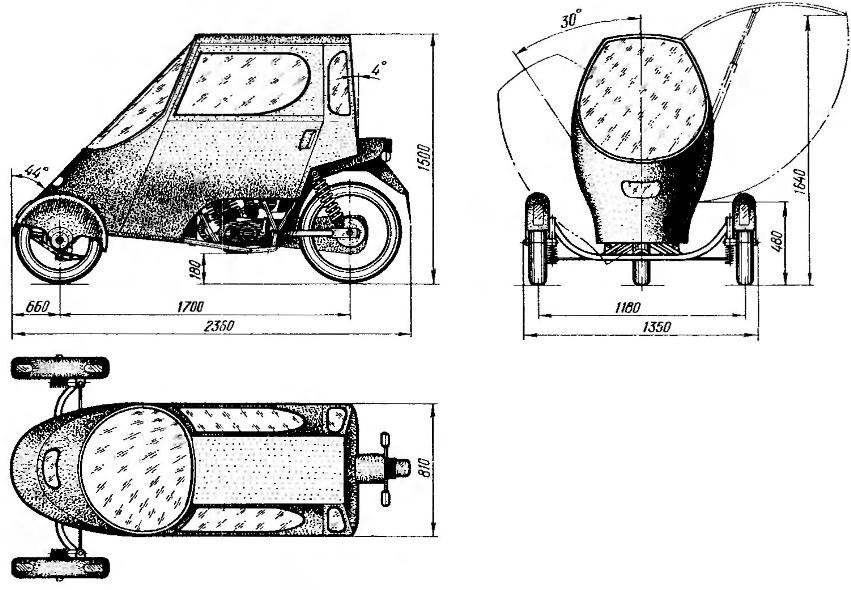 Tricycle with cabin, on the basis of motorcycle MMVZ-3.113 and the front wheels of a motor scooter. 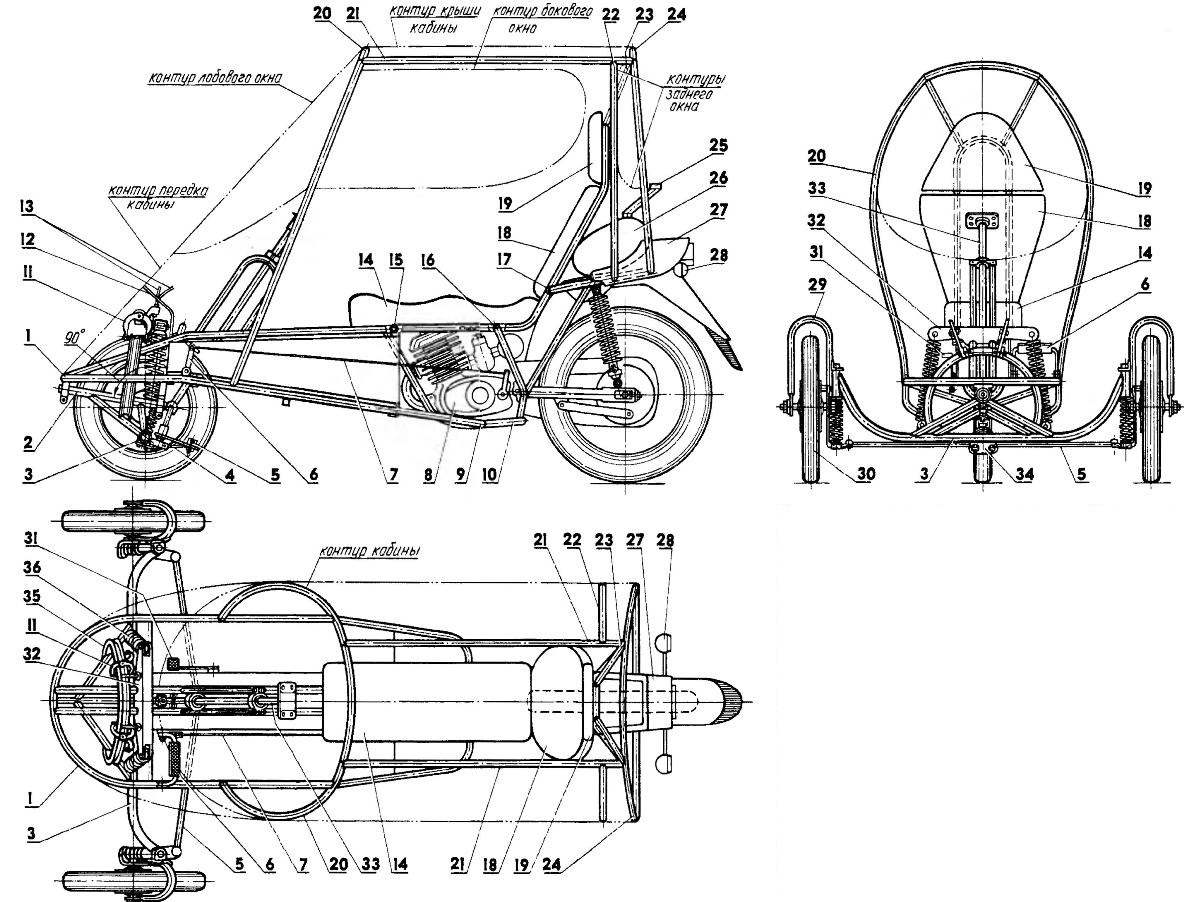 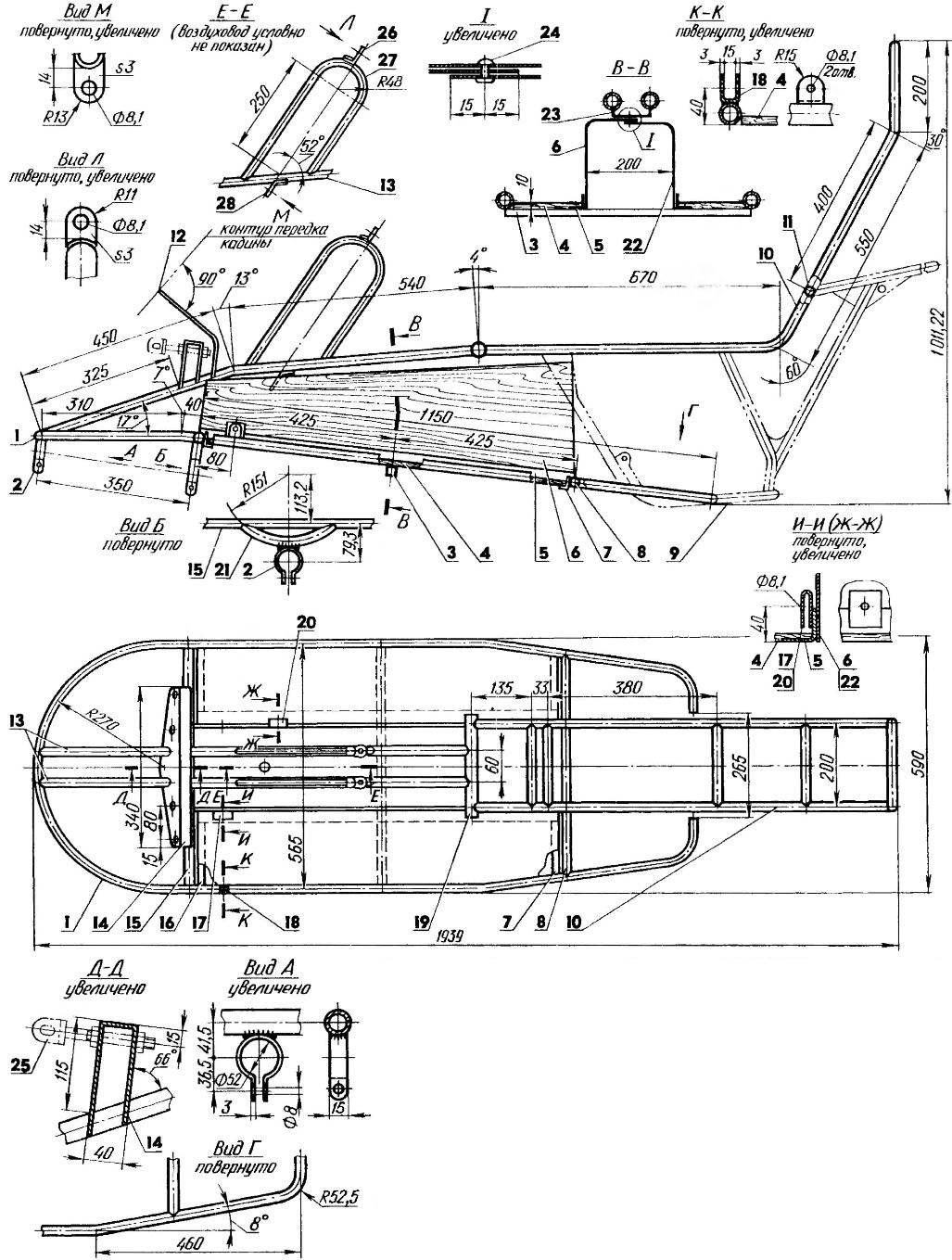 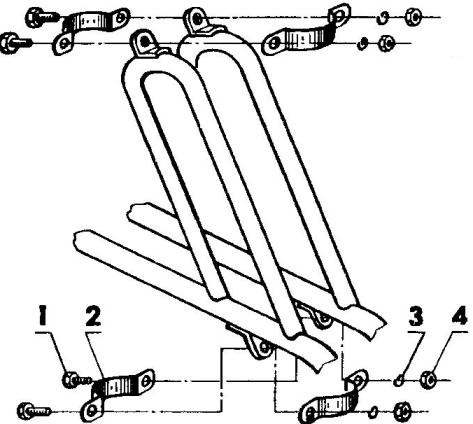 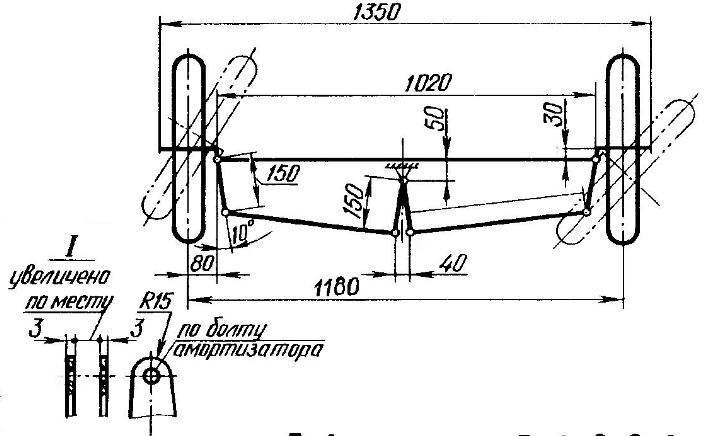 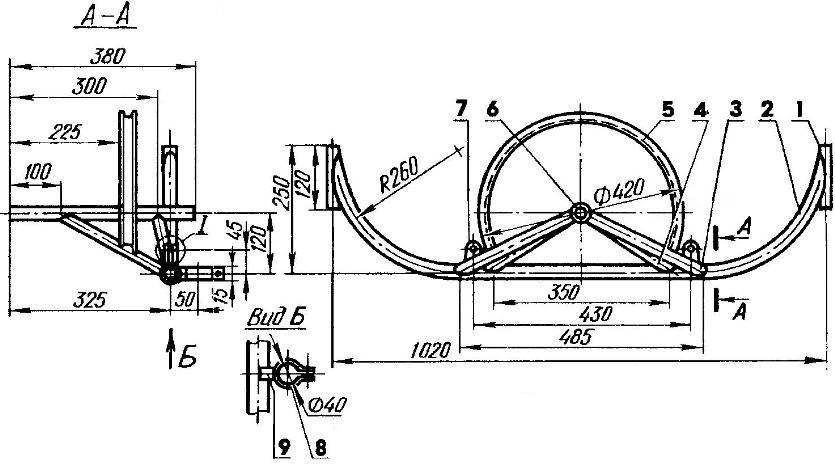 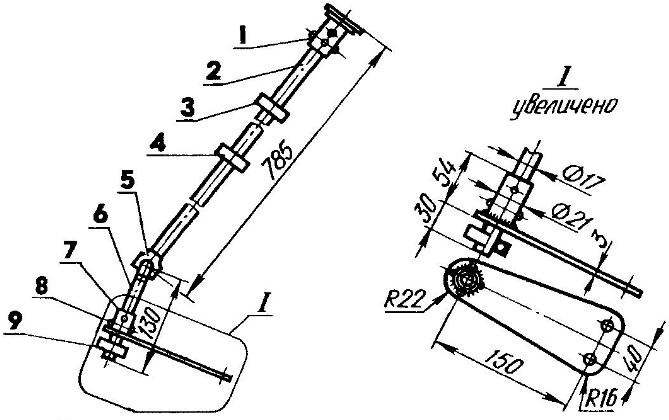 Front suspension:
1 – plug (pipe 21×1,5); 2 — focus (steel, sheet s6); 3 — pivot; 4 – bushing (Teflon, bronze); 5 — cups (steel, sheet s2); 6 — spring (from the rear shock absorber of motorcycle MMVZ-3.113); 7-time power steering; 8 – cotter pin d4; 9 — bracket; 10, the segment of the brake wheel; 11 – tip (steel, sheet s4)
The stability of the tricycle solved (partially) already in the design and manufacture of the first prototype. Driver when cornering tilted the main part of the machine (along with the engine and rear wheel) in one direction or another, as on a Bicycle, and thus parried the action of centrifugal force. For greater insurance, it could additionally put one foot on the crossmember of the front axle.
With the installation of the cab stop in front of the bridge foot was impossible, took the lever, which depending on the direction of rotation passed would force the right or left side of the bridge.
However, you can do without lever. The modified tricycle driver before entering the turn you need to tilt the movable part of the machine (angle 30°) and lock the brakes of tick-borne type (sport bike), which is located on the front axle; and after leaving the turn to release the brake latch. The spring mechanism roll themselves will return the machine to the upright position.
Were taken into account and other shortcomings of the prototype. In particular, the front axle light weight (used wheel from a moped with tires in size 65-405) and unloaded (enlarged base), which improved longitudinal stability and made it possible to extend the seat. Established streamlined cabin and its frame are connected with the frame of the tricycle, obra-sovav with her single power design. Introduced, as already mentioned, brake lock roll. And finally, foot to start the engine replaced on manual: standard lever hour partially cropped and nastavljen pipe with a length of about half a meter.
As the basis of the described solutions have been used units, units and details of serial two-wheeled motorcycle MMVZ-3.113. Frame the front and
the top is cropped, and the remainder is welded to the frame of the tricycle, made mainly from so-called Cycling of pipes of various diameters.
The base frame of the tricycle from a long arched tube section, but can be made from several shorter segments. Front to it is welded a collar of the first bearing mechanism of the roll and the side walls; bottom, to the front crossmember — tubular Duta to the collar of the second bearing mechanism of the roll and prop steps; at the rear by brackets of their foot pegs — used part of the frame serial of motorcycle MMVZ-3.113.
The side members of the frame bear the yoke — curved sheet steel U-shaped bracket with holes for bolts vernal brakes and shock absorbers roll and two inclined tubular steering racks. The ends of the spars are butt joined with the carriage frame sensors, to PE-
remicom which is welded to the — his circumcised pipes — used part of the frame MMVZ-3.113.
Between the base and the side members of the frame of the tricycle there is a tunnel that directs air flow to the engine head for cooling. Wall duct made of sheet steel. At the top they are riveted with a long bracket (from same sheet), and the bottom are welded with the longitudinal parts extending from the front to the rear crossmember. To the corners (longitudinal and transverse) screws attached to the footboard of thick varnish impregnated plywood covered with ribbed rubber mats.
Some details of the steering control of the tricycle is borrowed. For example, shaft steering column mounting bracket steering wheel (the tricycle he MMVZ-3.113) and steering rod with ball joints — sports Kar TA, and the universal joint — passenger car.
Ball bearings on the steering column wearing tight and angled hinge pillars attached with brackets and bolts. The cardan shaft bearing of the link is clamped in the clamp welded to the spacer on the beam front axle.
The front axle is assembled mainly from pipes. Its main element is a beam to which is welded the struts to the shaft and the brake mechanism rim roll loops shock mount spacer with the collar bearing and the pivot bushing. 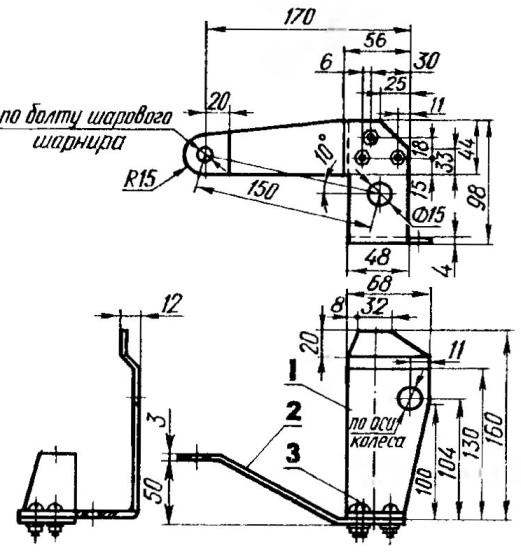 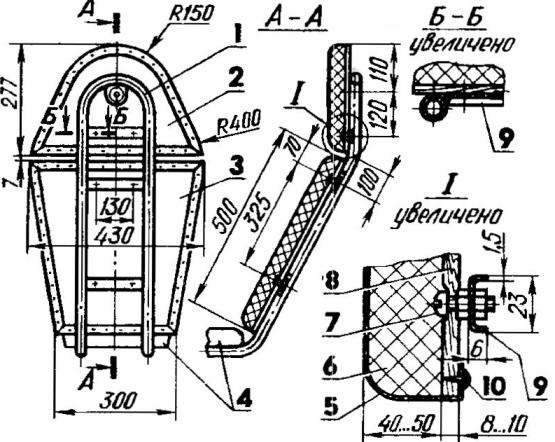 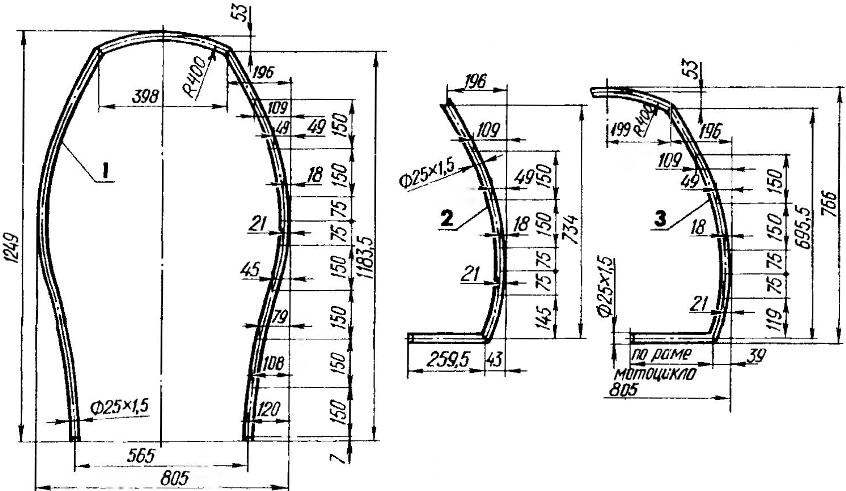 The arc of the frame of the cab:
1 front (tube 25x 1,5); 2 — medium (. rough 25×1,5, 2); 3 — rear (tube 25×1.5).
Roll the body of the tricycle is effected around the axis of this shaft. If you mentally continue the axle back, we will see that it is aimed strictly at the contact point of the rear wheel with the ground. Such a coincidence is not accidental — it is a guarantee the correct functioning of the mechanism of the roll.
Ball bearings on the shaft ends worn with interference and place the clamps on the frame of the tricycle.
Part of the Bicycle rim that is welded to the front struts of the bridge, the object of focus of tick-borne brakes when fixing mechanism of roll on bends. After turning the body of the tricycle is returned to the vertical position of the two rear shock (from a production motorcycle). Their upper ends connected to the stationary yoke and the lower hinge on the beam front axle.
The front suspension is made in form of spring-loaded tubular forks. With pivot bushings front axle of the fork are connected by long bolts — pins. As sliding bearings applied to the PTFE sleeve (two for each pin), but the fit and bronze.
The springs are enclosed in a homemade Cup, act as shock absorbers. They are taken from the rear of the motorcycle. Their length is such that the suspension movement along the axis of the pin is 60 mm.
Brackets, welded with flattened ends of the forks, bolted to the control fry. The latter is pivotally connected rods with a Central steering function, which receives control pulses from the steering shaft via a drive link.
The front wheels of the tricycle from the bike. They fully unified, as when the Assembly is mounted in the plugs with their axes without modification. However, these axles will not withstand any load. So it is advisable to still replace the cone-shaped thickening in the direction of the inner bearing (the diameter of the bearing must be 2-4 mm larger than the outer).
Seat, driver and passenger motorcycle — MMVZ-3.113. The seat back is hand made. The device is covered in detail in the figure.
The frame of the cabin consists of a tubular arches and sidewalls connected with in battle and with the frame of the tricycle by welding. Three-Chg cycle is not a homemade car, technical requirements which prohibit the installation of windshield is made of plastic. The cab on all sides (except the bottom, of course) lined with organic glass with a thickness of 2.5 mm.
The windshield has a complex spatial shape, so it is molded in a wooden master model with heating by a gas burner. Roof, rear and side panels in the molding is not needed, because it is composed of straight lines. To loops welded to the arches and sidewalls of the frame, they are attached with small bolts through the rubber seal. 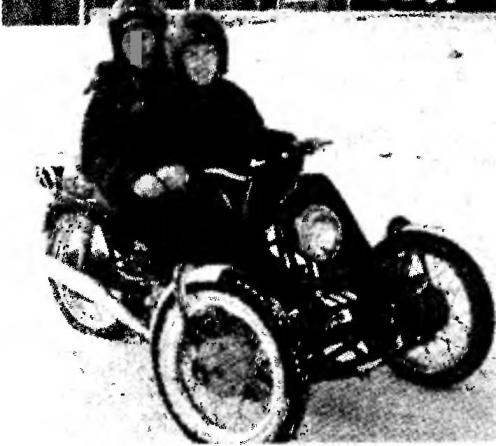 Port side cabin has a flip-up flap with telescopic holder like those used on back doors AV-gomobile-hatchback. The flap pivots on two horizontal axes, screwed in the front and middle of the arc frame. In the closed position it is fixed with a mechanical lock hidden in podokonnuju panel. When turning up the constipation of the panel are nominated by pins and are received in corresponding openings in the arches of a skeleton.
The cabin is not entirely transparent: the area required by the driver for normal review left untouched, and everything else painted. And snug-ri. Therefore, the saved, on the one hand, the shiny outer surface of the Plexiglas, and on the other — the usual human visual perception of the cabin itself.
D. SHAVEYKO, Minsk