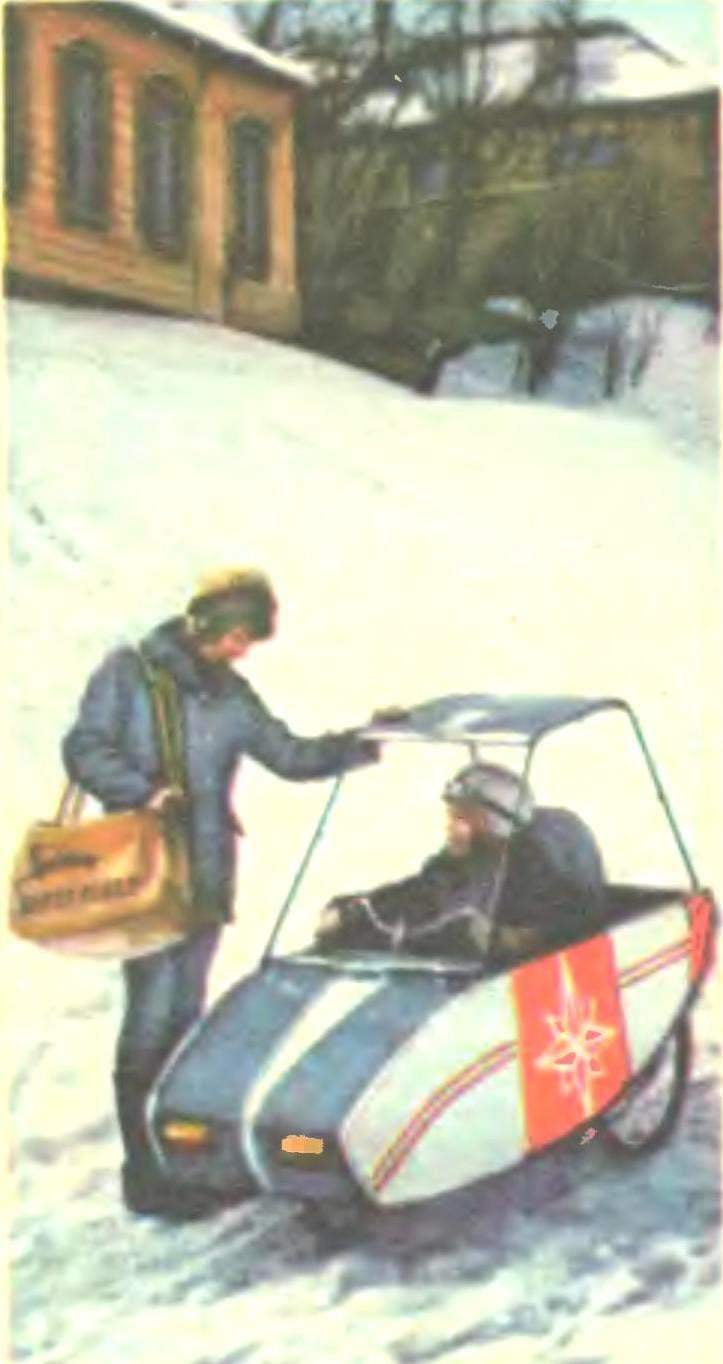 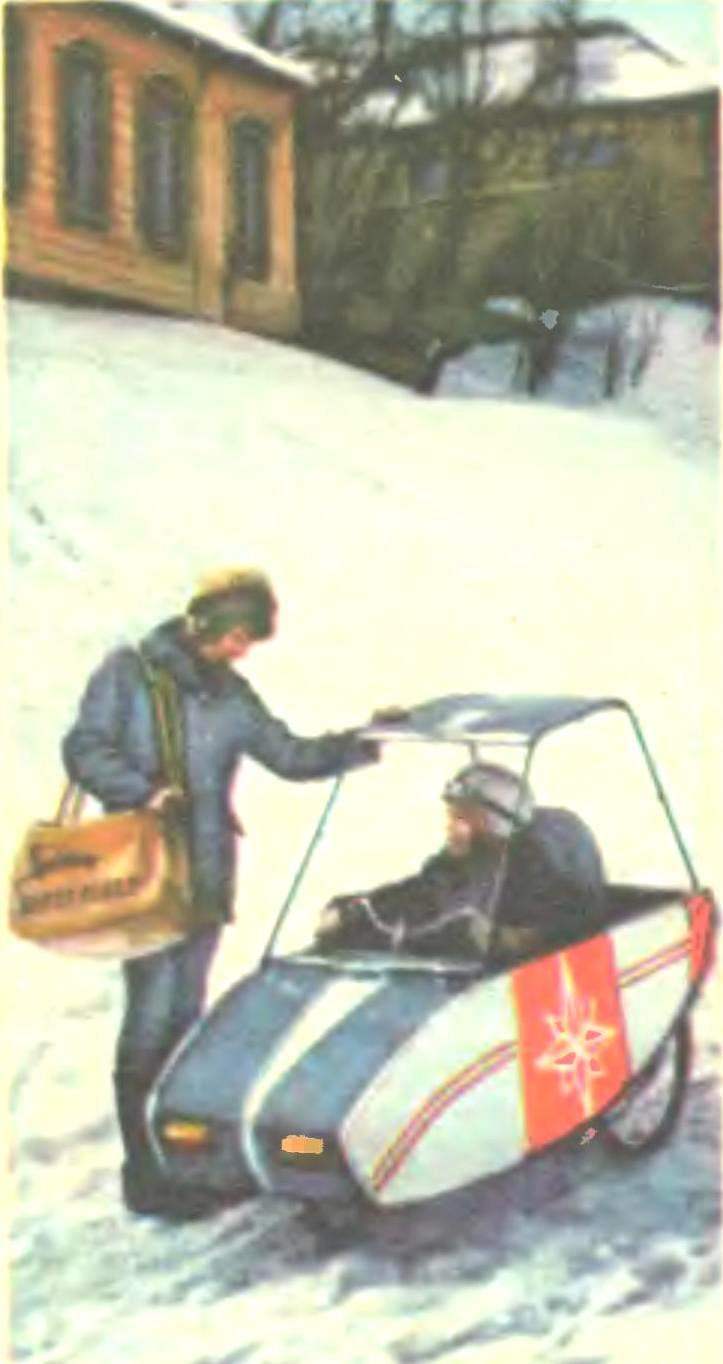 Oddly enough, recumbent… older bike. Its ancestor can be considered the original “self-moving carriage” proposed by the famous Russian inventor Kulibin in 1791. On her back, at the back, stood the servant, pressing down on the levers and spinning the two horizontal flywheel.
In our days in different countries designed several types of velomobiles, and one of the firms of Japan have even taken their production for export.
We want to acquaint readers with the design of the recumbent, built by the renowned athlete and author of many interesting mother’s Stecenko Yu., postgraduate student of Kharkiv Polytechnic Institute. Of his works we have already told in the pages of the journal (“Cards “Hadi-electro” No. 7 and “the Conquest of speed” No. 12, 1975). As a member of the student design Bureau of the Institute Yu. Stepchenko was directly involved in the development and construction of the motorcycle, the electric chart, the electric vehicle. He owns the speed records. And suddenly a recumbent?
No, not all of a sudden: this is a continuation of the search for unbeaten paths, interesting technical solutions. Because “Vita” — the First swallow Amateur-built velomobiles. The editors hope that in the future readers will share in the pages of the magazine and his experience of creating such machines ka base bikes.
What is a velomobile? It is a small single “the crew” on three Bicycle wheels: two leading front rear and steering. The housing consists of a tubular frame structure with a veneer of thin sheets of fiberglass. All tubes, steel tubes, thin-walled, connected by soldering brass. 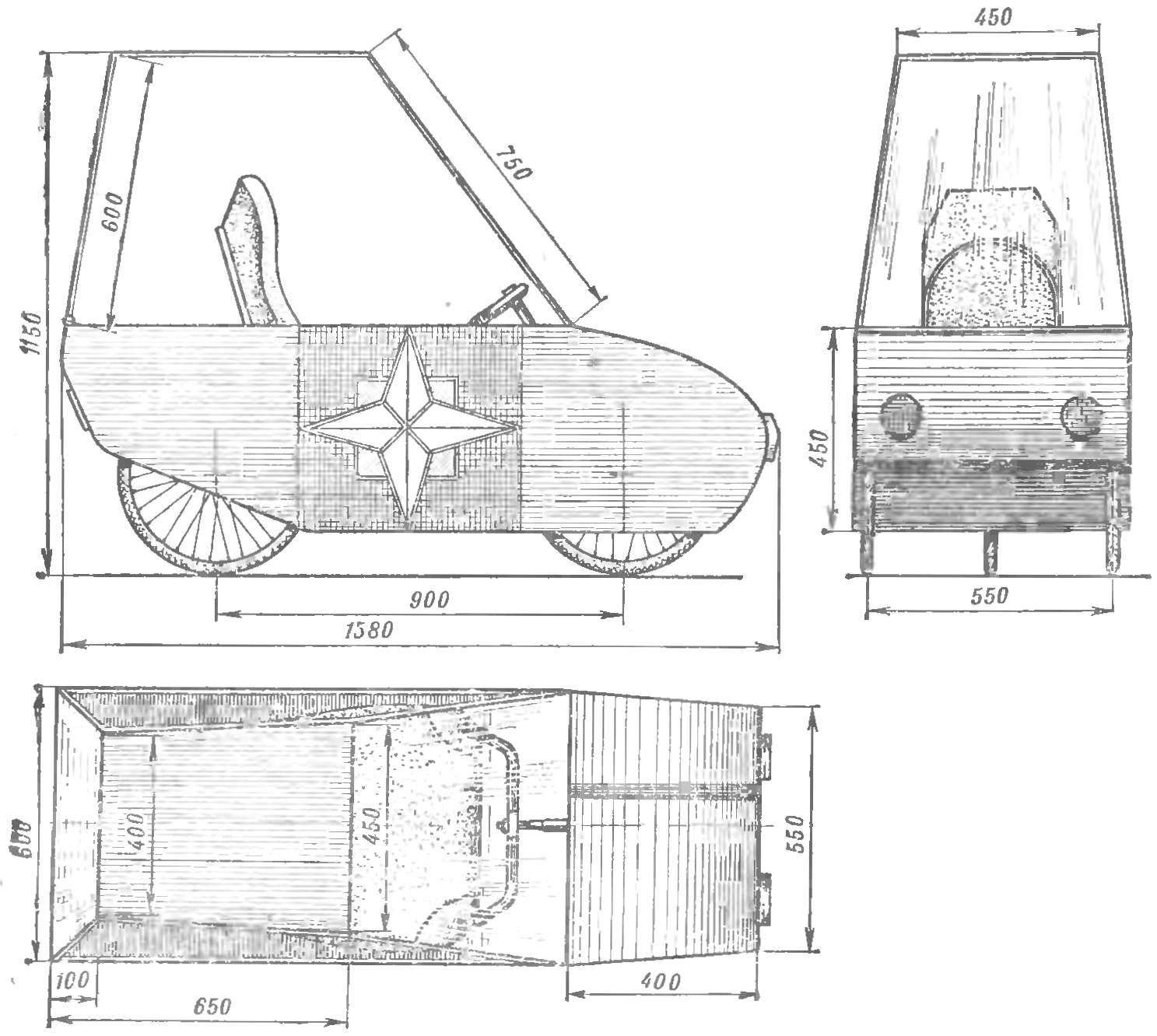 It is interesting that the design of the recumbent Y., Starchenko used sketches and wire models at a scale of 1:10, which greatly facilitated the arrangement of basic elements, helped to choose the most convenient and efficient body shape.
In the undercarriage was used the finished components and parts. The wheels are off the Bicycle “the Schoolboy”. Front fork from a teen bike “Eaglet”, it only had to be shortened by 35 mm Suspension rear wheels implemented on two frames from the same bike.
Pedals and drive the most interesting part of the device “Vita”. In recumbent used conventional pedal and special design, with extra long levers. They are made in the front part podgotovkoy and executed separately, that is, can work independently from each other.
From each of the rods is a cable transmission intermediate shaft on which the pulleys of the two reels with ratchet mechanism (the ratchet off the bike “Tourist”). Return the rotation of the drums provides a rubber shock absorber. On the intermediate shaft there are two leading asterisks z=32, connected by a chain drive with sprockets rear wheel z=16. All the stars — from the “Eaglet”. 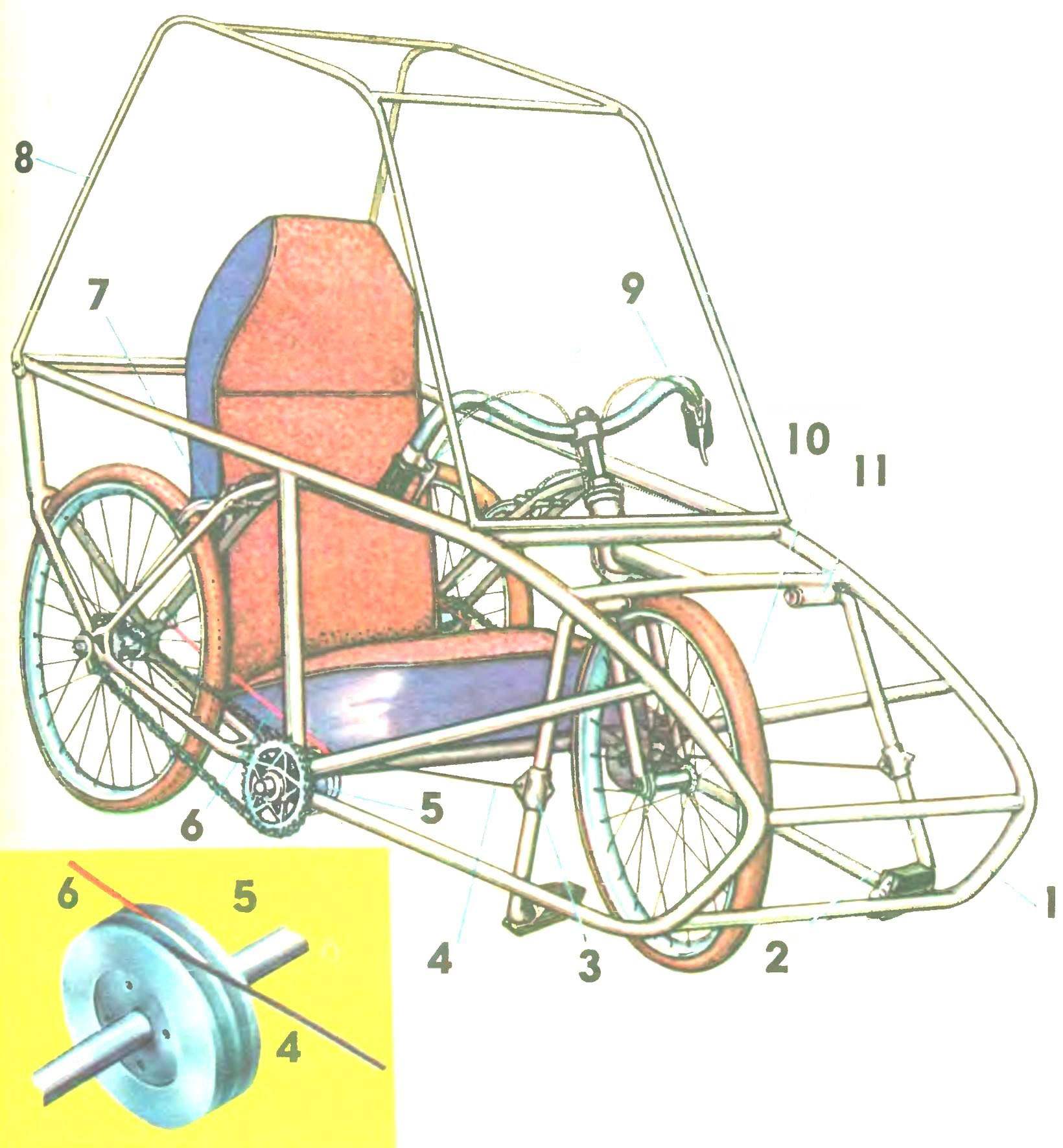 Layout scheme of the velomobile:
1 — frame, 2 — pedal with an elongated connecting rod 3 — movable clamp for fastening a traction cable, 4 — wire, 5 — reel with ratchet, 6 — rubber cord, 7 — brake, 8 — frame cabin, 9 — brakes levers, 10 — steering wheel 11 — the bushing rod.
Such a device provides an independent transmit: you can click on each pedal alternately or both at once. The originality of the mechanism lies in the fact that the force transmitted to the drive wheels can be changed, also thanks to the moveable joints on the connecting rods, which are attached to the cables. Moving them up or down while driving, it is possible to achieve the same effect that gives the vehicle continuously variable transmission.
This type of “continuously variable transmission” is used velomobiles for the first time. Foreign structures are other more complex mechanisms.
Vita has good handling characteristics, while maintaining the “Cycling” easy and light weight — 29 kg. On the road with asphalt, she develops a speed of 15 — 16 km/h, and slightly sloping, more than 20 km/h. as for the pleasure experienced from riding on the recumbent, anyone who will build it, can see it myself.
* * *
The author of the recumbent considers it possible to apply in the design of such a machine, the inertial actuator. Even offers two versions of its device.
The first, most simple, when the inertia of the drum or cylinder weighing 2-5 kg (depending on weight of driver) is fixed rigidly on the axle of the leading stars. The second is the removal of the inertial reel behind the driver’s seat, in the Luggage compartment of the velomobile, and mount it on an independent axis, above the rear wheels. In ATOC case to the rear axle, you need to put a sprocket to transmit rotation to the axle of the inertia reel. Weight it remains in the same range, and the ratio of gears is determined experimentally. Here, as they say, everyone has the opportunity to demonstrate your design abilities.
V. ZAKHAROV, V. SINYAKOV