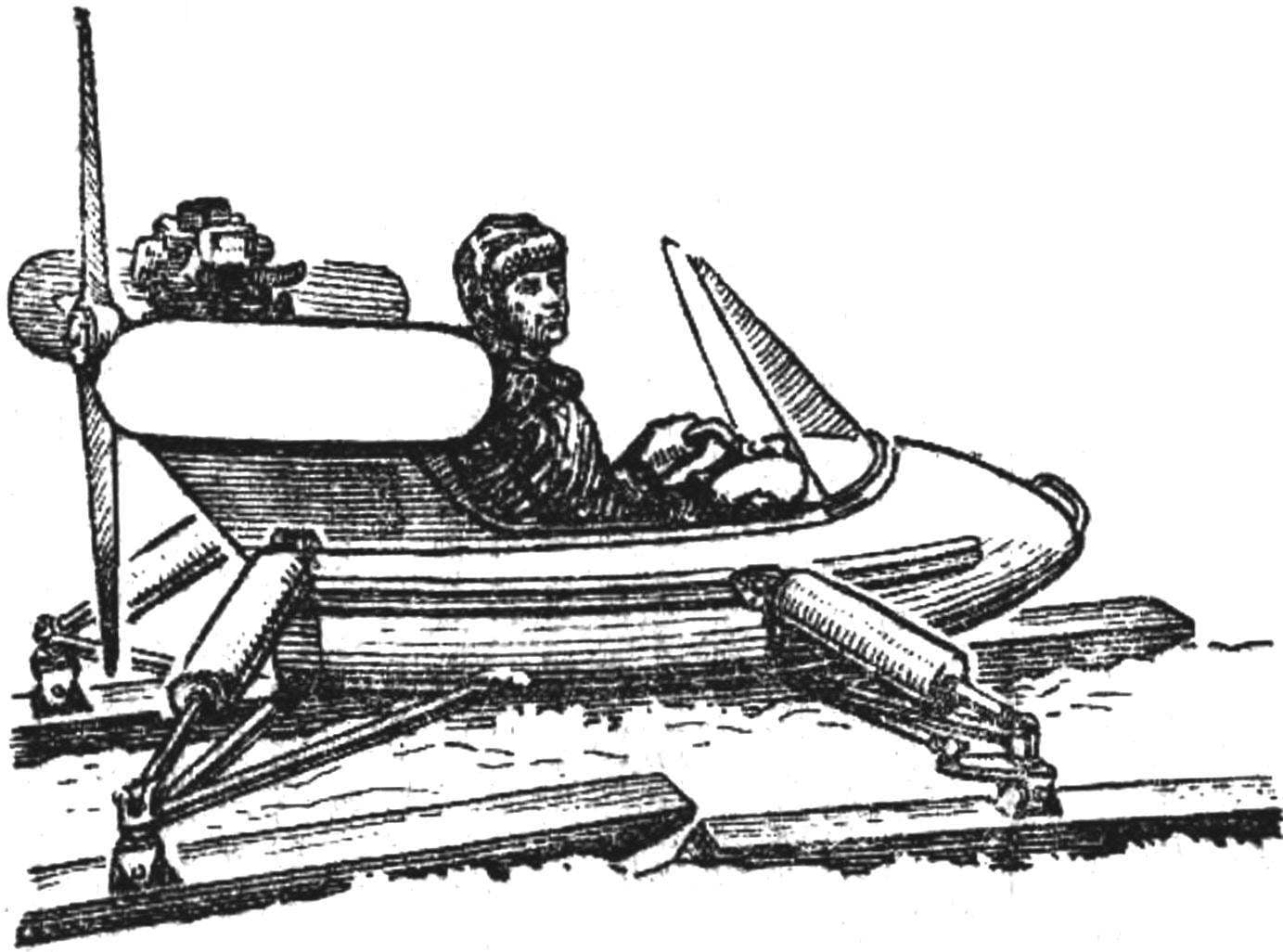 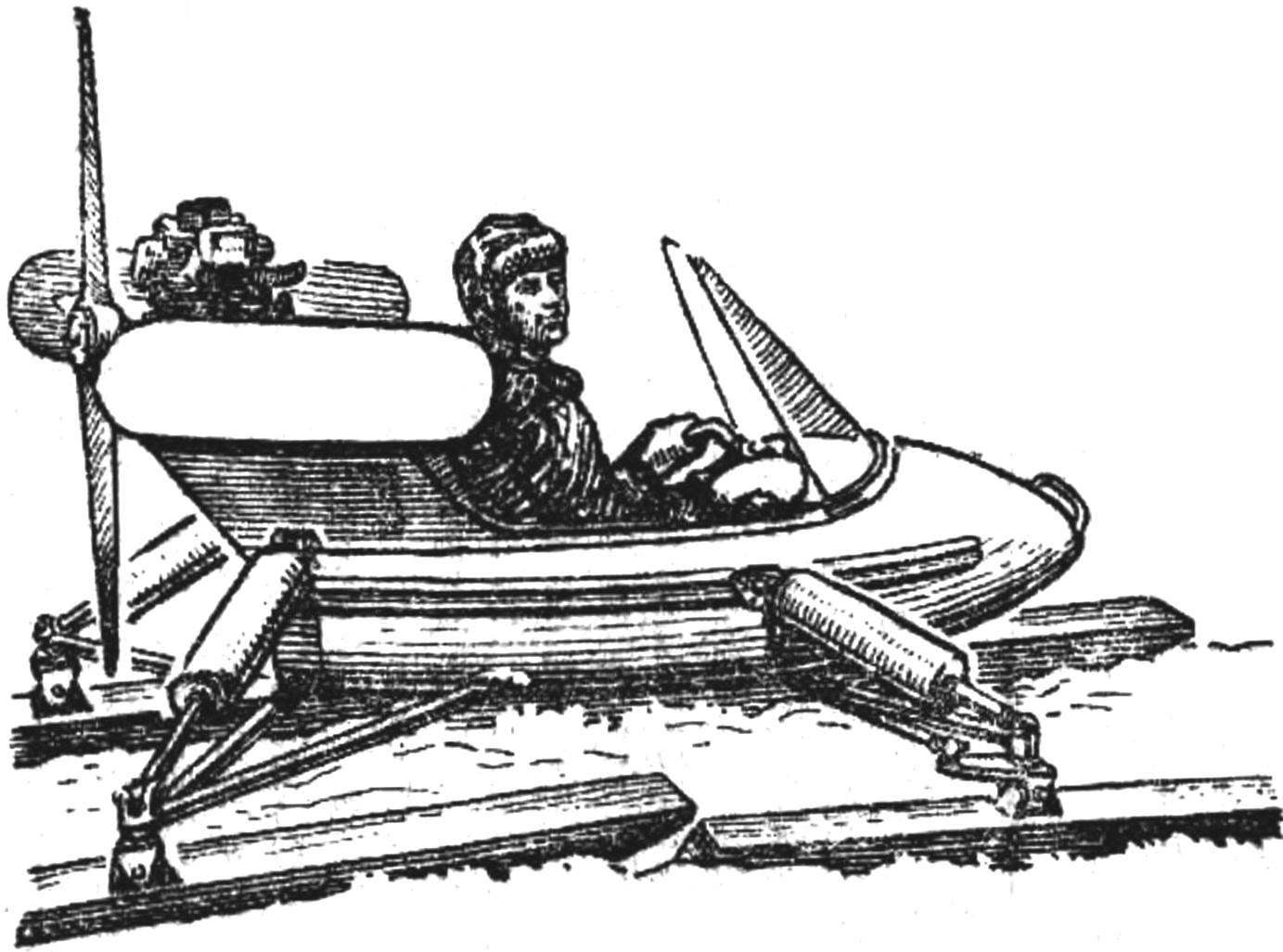 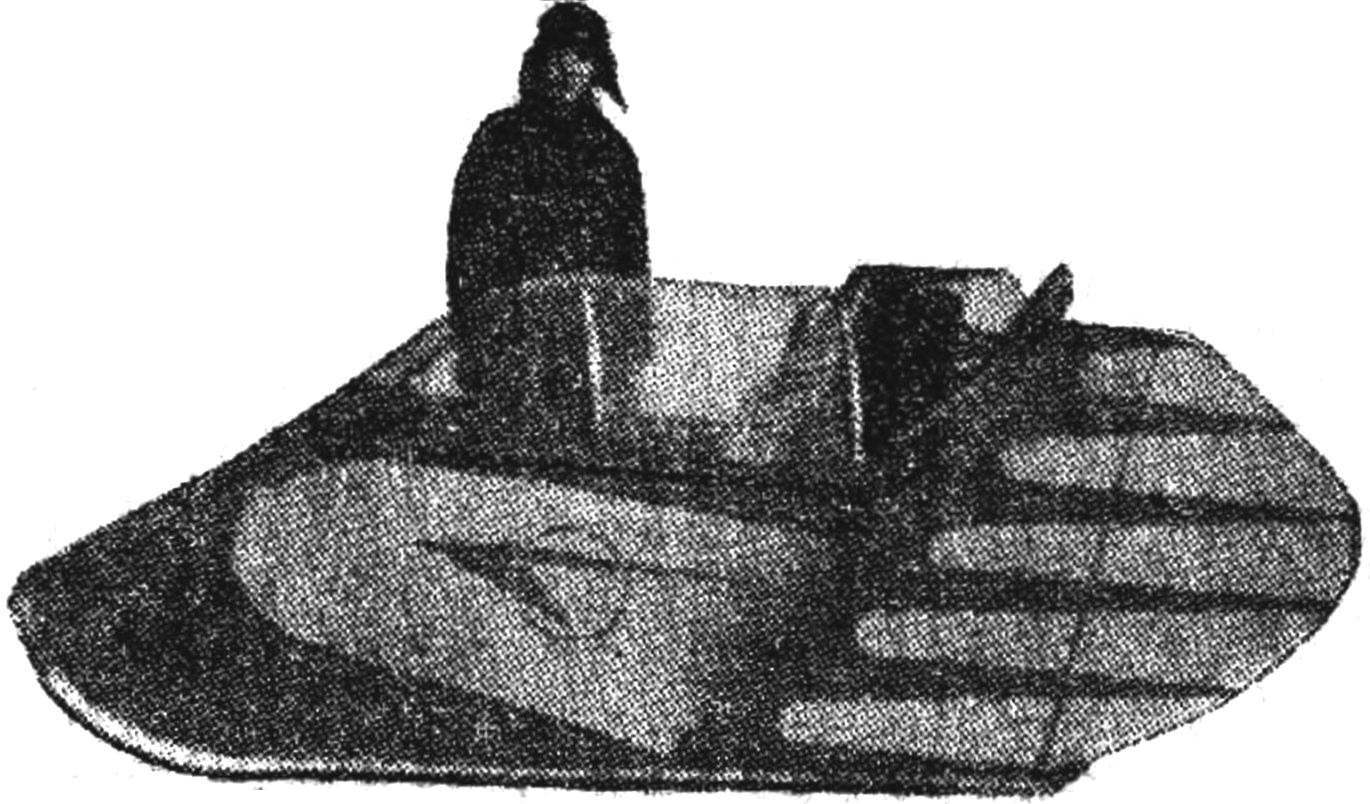 Paul A. Deryabkin, snowmobile enthusiast equipment Ivanova from the city, have created more than one snowmobile. His first design, snowmobile-amphibian (photo). successfully tested six years ago. The trail was designed and built trehmernye snowmobile, which also showed good driving performance. But they had a weak side: the lack of stability on sharp turns and when driving on rough terrain. And now created a third option: chetyrehlistnyj snowmobile (figure), which, according to P. A. Deryabkin, was the best.

Perfecting the structure and its suspension, Pavel Andreevich did a great job and for the selection of the propeller.
All three designs of the snowmobile was developed ka database-cylinder engine M-10, with capacity of 15 BHP at 3000 rpm.
Built by Pavel Andreevich machines attract constructive completeness, good proportions, aerodynamic shape and excellent surface finish.
In these snowmobiles and original technical solutions. This can be judged according to the following design chetyrehlistnyj machine, which for its resemblance to the beetle water beetles we in the editorial was called: “Water beetles”.
The body of the snowmobile is designed for one person. It is made of fiberboard of the tank. The thickness of its walls about 6 mm. 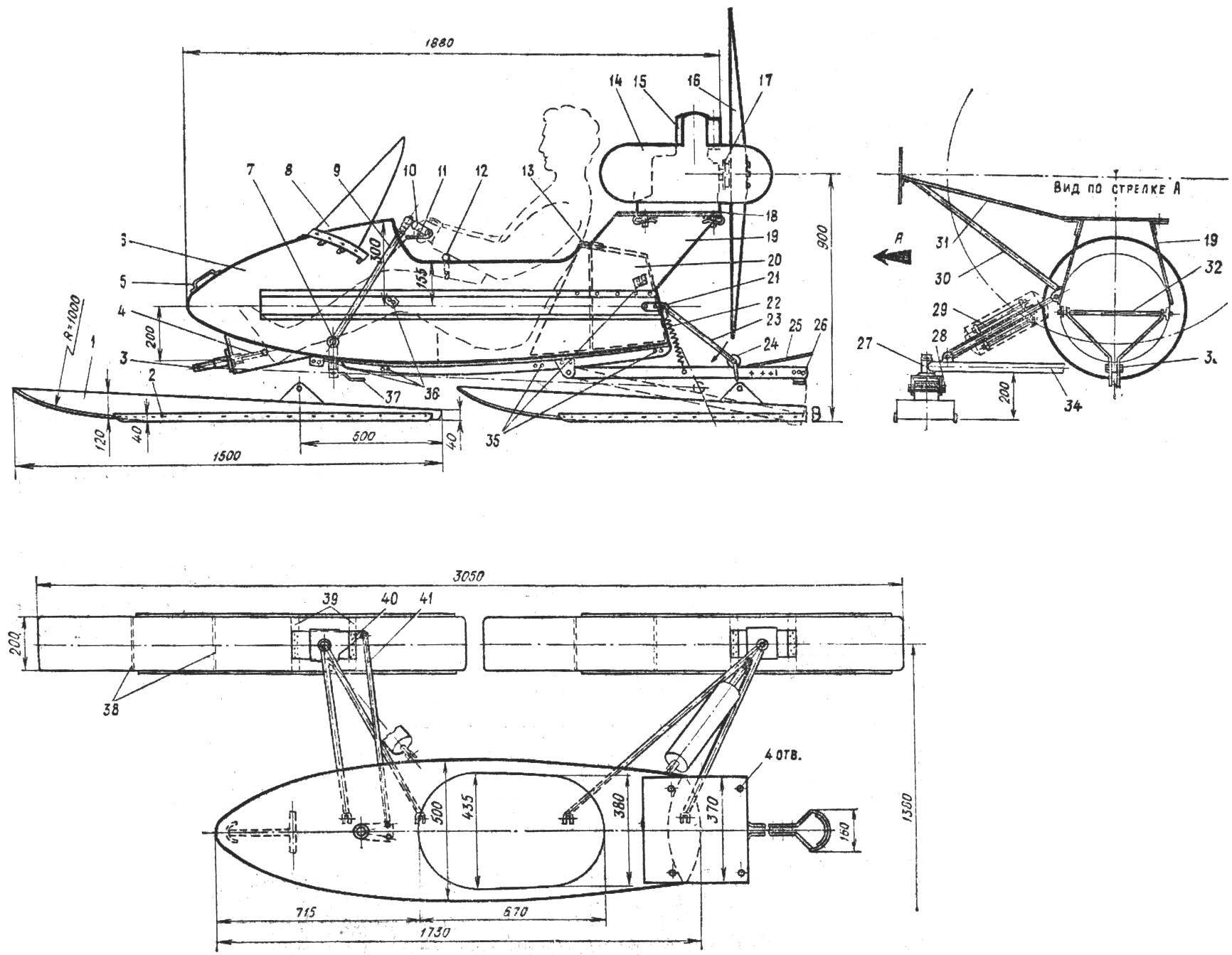 Fig. 1. The scheme of the snowmobile “Water beetles”:
1 — front ski; 2 — side undercut skiing; 3 — brake lever; 4 — brake pedal; — a handle in the forward housing portion; 6 — housing; 7 — rotary steering column; 8 — windscreen; 9 — steering strut; 10 — handle rudder; 11 — throttle lever; 12—the lever of an advancing of ignition; 13 — neck of a petrol tank; 14 — washer fence screw; 15 — motor; 16 — rotor; 17 — the starter pulley on the propeller hub; 18 — Playground a motor frame; 19 — plate of the motor frame; 20 — gas tank; 21—an arm of the brake mechanism; 22 — return spring brake lever; 23 — the lever of the brake mechanism; 24 — pulley; 25 — screen-reflector; 26 — brake, 27 — Bush rotary axis of the front skis 28 — axial bolt skis; 29 — absorber skiing, corded; 30-31—rack enclosure screw; 32 —axis brake lever; 33 — a bolt roller brake lever; 34 — the floor of the ski; 35 — fixing unit, the understory of the rear ski; 36 — the attachment points of the suspension to the front ski; 37 —steering lever; 38 —internal diaphragm skiing; 39 —internal reinforced diaphragm skis; 40 — the control lever to the swivel axis of the ski; 41 — pull control.
The case has a “landing” cut, reinforced metal edges, and the number of additional profiles, riveted to the casing of the tank to strengthen the most loaded areas. The bottom casing rests on the profile of T-shaped form, which serves as the main supporting element. To him is pivotally mounted suspension front driven and rear of the ski. This profile relies on and the sub frame.
Suspension consists of four interchangeable ski box-section with side undercuts, two on each ski. The presence of undercut reduces the flow of snow under the soles of the skis when driving on loose snow, increases load capacity and ensures a precise rate.
Depreciation is ski rubber cords, which are closed with special fairings.
Management snowmobile — two front ski connected to the steering column. Transmission of force from the control lever on the column to the steering axis of the skis tubular rods. On the handlebar mounted control lever throttle carburetor (throttle lever).
The braking of the snowmobile is carried out by the device of the scraper type. It is placed along the longitudinal axis of the machine and made on a movable arm in the plane of rotation of the propeller. This protects it from snow and lumps of ice flying from under the scraper when braking the car. With the same purpose on the brake lever installed additionally screen-reflector.
The brake operates by a pedal located in the cab under the right foot of the driver. To the off position brake lever is returned by a spring. Operation showed that the brake of this type works quite reliably. soft and Packed snow.
The motor M-10 is equipped with a float carburetor, and oil pump that provides pumping of the oil drilled in the engine block channels and supply it to the friction parts.
The engine is mounted on the motor platform frame, which squares with two bonded plates. They, in turn, are attached to the tray longitudinal profiles, riveted at the sides of the hull.
Fuel is supplied from a tank with a capacity of 25 liters, located under the engine; it is fed gasoline pump.
The engine is started the starting cord, which is wound on a pulley mounted on the hub of the propeller. For installation of the cord pulley has a groove.

Fig. 2. Propeller for snowmobiles “Water beetles”:
pushing, left rotation, designed for engine power 15 HP at 3000 Rev/min, the screw pitch 0.75 R=0.53 m, screw — wood (birch).
The propeller installed without a reducer, that is, directly on the shank of the crankshaft. The screw has a Ø of 1.2 m with step equal to 0,53 m. the Tractive force of the screw 60 kg, or 4 kg per HP of engine power.
The machine has a safety barrier of the propeller. His farm ends dural plates-washers are oblong. On them the inscription, warning the public about the hazard at the rotating screw.
Snowmobile successfully operated for three winter season, have good maneuverability and speed.
P. DERYABKIN, Ivanovo