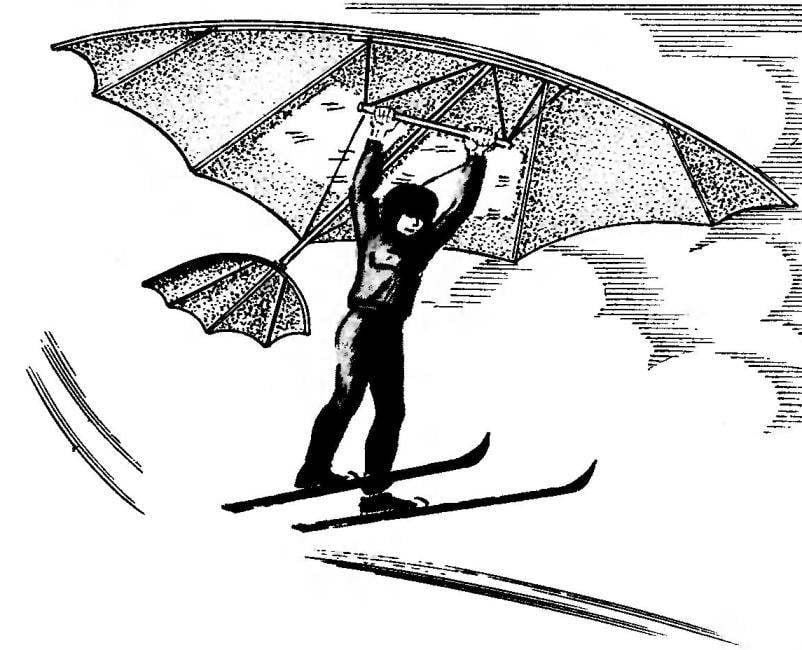 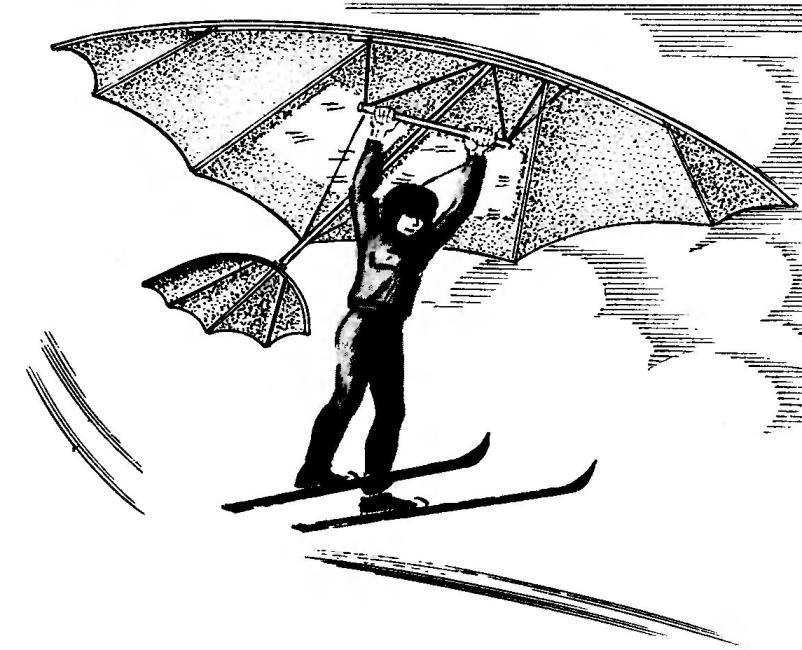 Sail is one of the oldest inventions of mankind, who played a revolutionary role in the development of navigation. The Millennium operation has made sailing propulsion is very perfect, and it seemed that his aerodynamic abilities reached its practical and theoretical limit. A new stage of development of this propulsion system uses the wind power, was the creation of a rigid sail with double-sided sheathing.

In fact, this design is no different from an aircraft wing. Its use significantly improves driving performance sailboats that were displayed on the first ice boats and catamarans, and then on yachts and commercial vessels-verahdah. The only drawback is the bulkiness of such a propulsion device and cannot be folded into a compact bundle.
Readers universal sports projectile based on rigid sails. With skis and roller skis, roller skates and Kabarda, sledges and monaliza it can be used as a very effective propulsion. In addition, this sail can perform the function of the wing, allowing the athlete to make planning the jumping low jumps.
As can be seen from the drawings, this extraordinary apparatus looks like a giant glider model. The fact that it is equipped with a stabilizer which turns the wing into a self-regulating system that is automatically oriented in space relative to the wind direction as well as set an optimum gliding angle of a flying model. 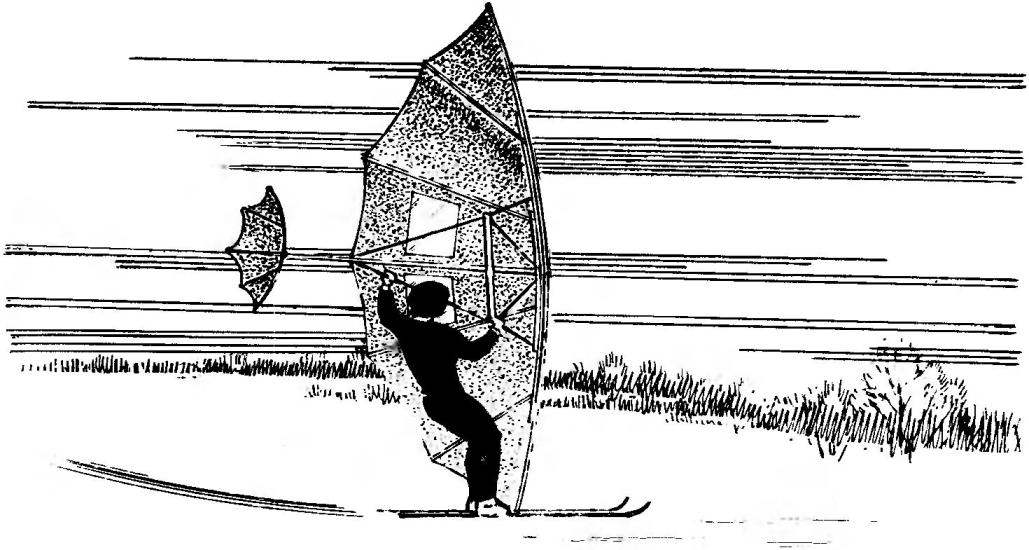 The sail is a wing
The creation of the sail-wing begins with the manufacture of the mast (or, if aviation terminology closer to you — front edge). The mast, by design, reminiscent of the spring, consists of three pine plates.
Front (the longest) has a thickness of 30 mm, average 25 mm and rear 20 mm. If you pick up a four-metre long rail you do not succeed, then the blank can be glued with epoxy glue two shorter, docked ostrogannye “mustache” bar.
The wing has an asymmetrical profile, allowing to create a sufficiently large lifting force. The outline is specified with five ribs and front part of the mast, having a rounded shape, handled in accordance with the profile of the sail-wing. Rib of the wing is made of plywood 3 mm thick with edging strips of a cross section of 10×10 mm. For the relief of the ribs are cut holes. Near the trailing edge rib reinforced duralumin (s1,5 mm) plates. Fastening the ribs to the mast — in a thorn with reinforcements a couple of layouts from strips of 10×10 mm.
On each end of the mast is fixed a kind of spurs — the cut steel pipe, flattened on one side. When driving one or the other spur is inserted into the universal joint, mounted on a sports apparatus, used in conjunction with a sail-wing. The rear edge of the wing, resembling the bow of steel wire, allied with a diameter of 1.5 mm.
The wing connects to the stabilizer with beams of duralumin tubes with a diameter 40×1,5 mm or round pine bar of the same diameter, coated with “epoxy” with a couple of layers of fiberglass. 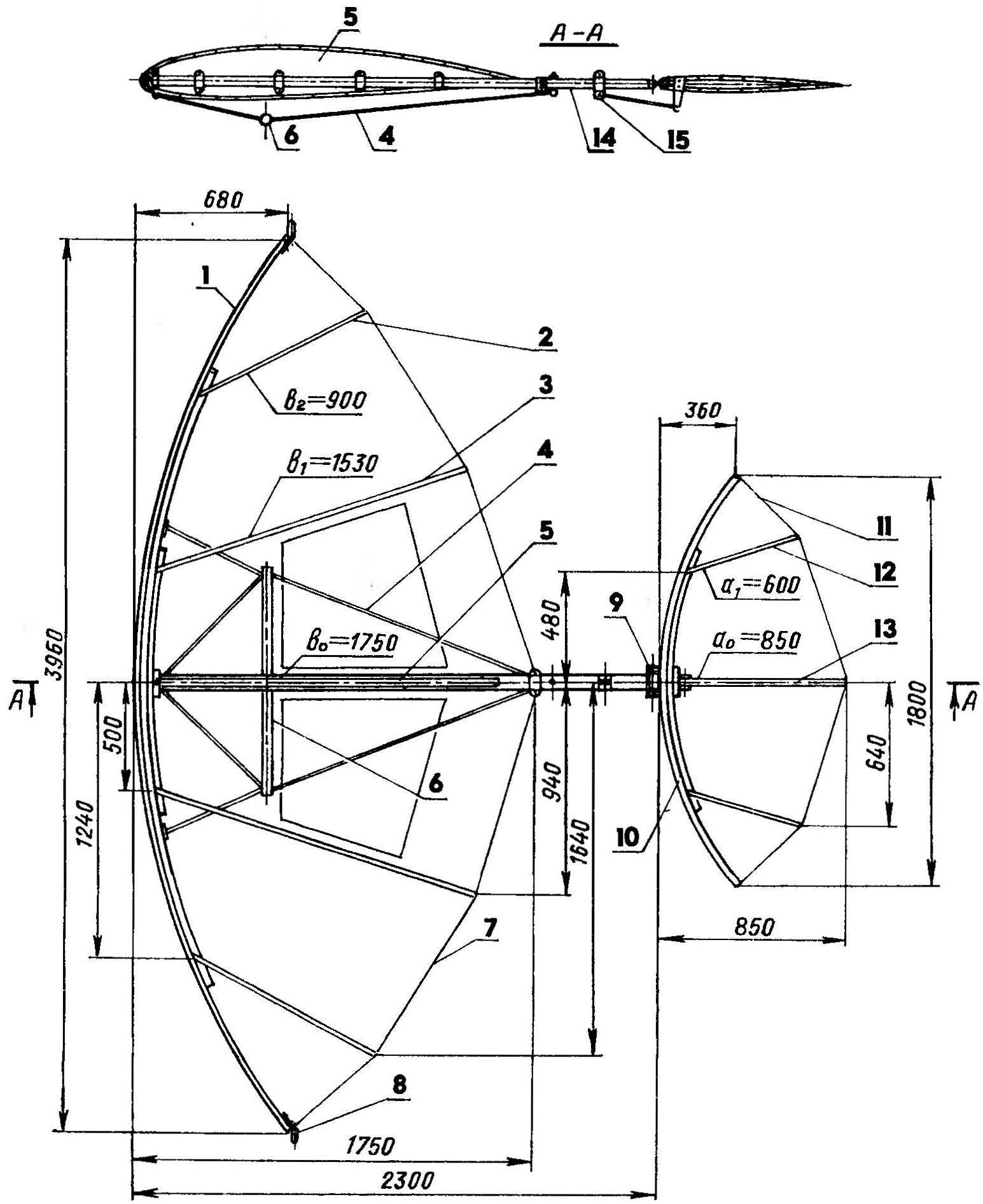 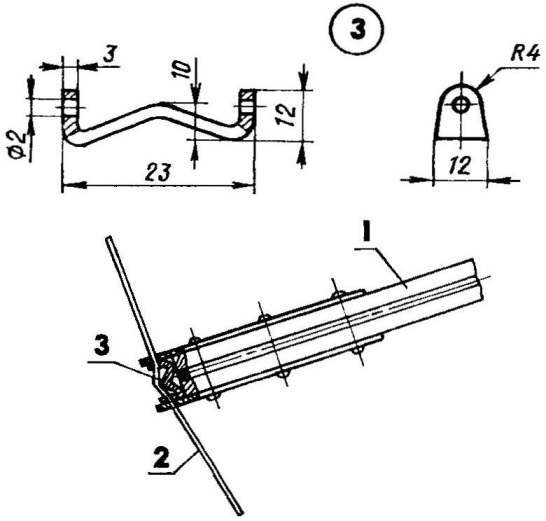 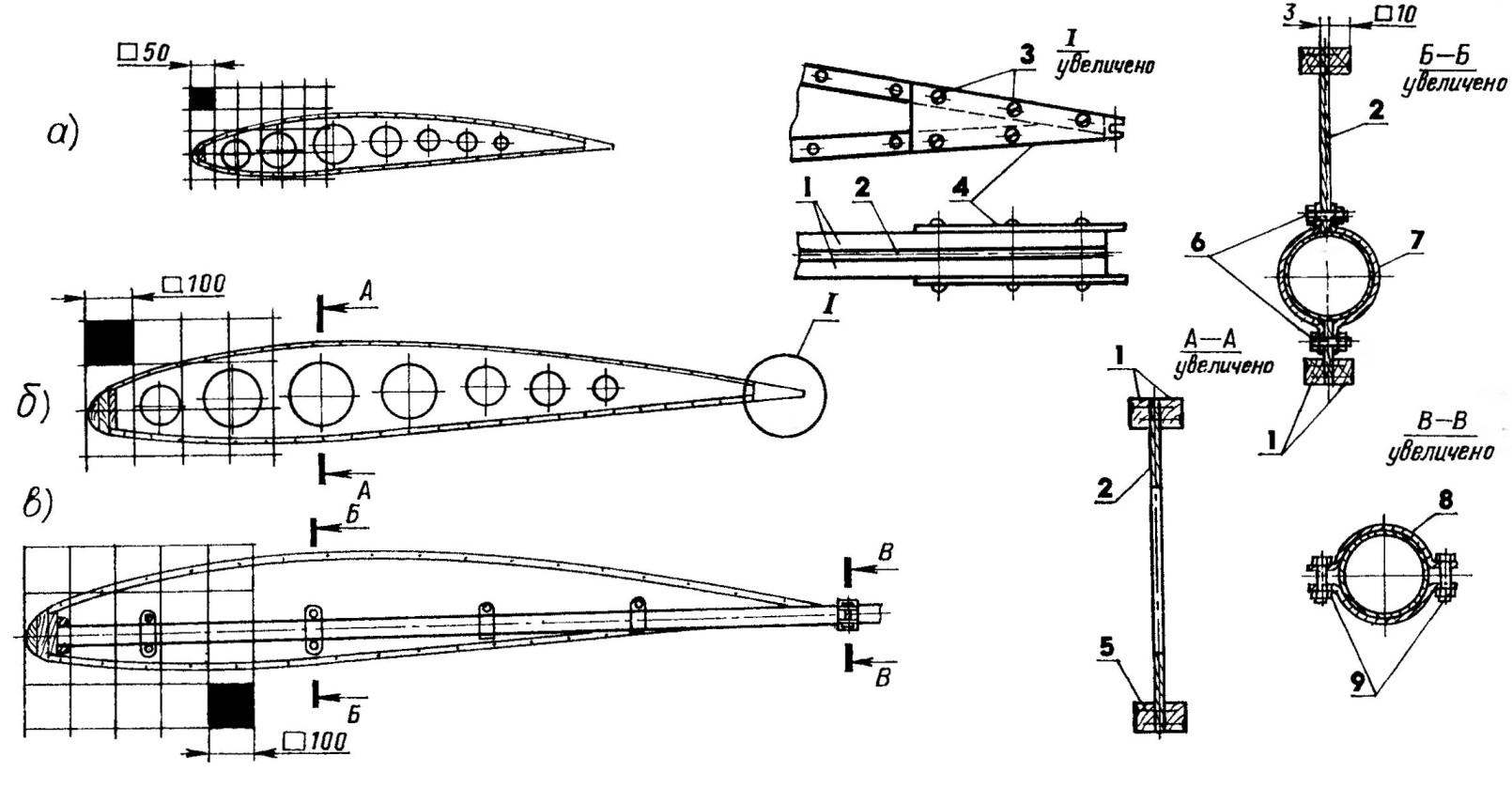 Rib No. 1 (a), rib No. 2 (b) and the Central rib (at) sail-wing:
1 — rail edging; 2 — rib; 3 — screws; 4 — pads; 5 —nail; 6,9 — bolts M5 shikami; 7 — a collar of fastening of the Central rib; 8 — clamp the trailing edge of the wing to the Central beam.
All-moving stabilizer design is similar to the sail-wing. The front edge consists of a pair of pine slats, the transverse set of three ribs. The trailing edge of the stabilizer, and the wing is from a 1.5 mm wire. The front edge of the fixed horizontal hinge, and on the Central rib — hog mechanism for adjusting the angle of attack of the stabilizer. The latter is connected a longitudinal rod with a steel clamp mounted on the beam. To adjust the angle of attack of the stabilizer yoke is shifted on the beam and fixed at a selected location with a bolt and a nut.
The wing and stabilizer can be performed in two ways. If you intend to do sports collapsible shell, the lining is made of fabric that is usually on the jackets. By the true dimensions of the wing of a fabric sostragivajut two “bag”, which dock along the axis of symmetry of the wing with lacing. Zone lacing is closed by a strip of the same fabric and secured to the skin with buckles, “Velcro”.
If it is supposed to manufacture molded wing, it should be fitted according to the classical technology “wood” aircraft. Plating in this case is cut in the shape of percale, calico, or any other cheap fabric. First sostragivajut cloth for the upper and lower parts of the right and left polycrylic, then set the wing twice (with intermediate drying of the first layer) is coated with Amalita vtupuyu and it stretched the cloth. The fabric is carefully pressed to the set and covered with two or three more layers of liquid Amalita, and after drying and light sanding with nitrocellulose lacquer.
When cording is necessary to provide the wing improves visibility window of the Mylar film. Arrange them on the height of the head of the athlete. To sew the Mylar in the fabric cloth, film contrived duct tape, Scotch tape, then we used the seam “zigzag” to the fabric. Then the cloth inside the window is removed and the edge it is secured by another seam “zigzag”. 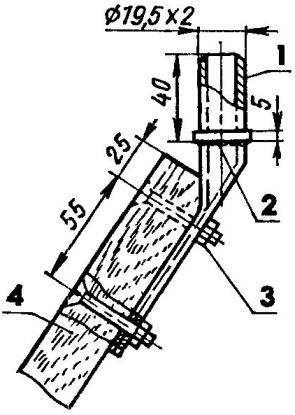 The installation of spur:
1—spurs; 2 — ring; 3 — a bolt of M6 with nut; 4 — edge-mast of the sail-wing front.
To control the sail-the wing provided a bridle of nylon rope with a diameter of 8 mm and arms of round wooden rails with a diameter of 30 — 40 mm. The position of the handle relative to the focus of the wing (focus or, in other words, the point of application of lifting force, spaced from the leading edge of the wing at its axis of symmetry at a distance corresponding to 25 — 30 percent of the length of the Central rib) is set at such an angle to the direction of air flow, which occurs on the wing is greatest. It helps you to choose and adjust the installation angle of the stabilizer: typically this angle is from — 3° to — 5° to the plane of the chord of the wing.
Mastering the a sail-wing is most convenient to start skiing or monoluge. The most convenient course for the first training — galfvind when the wind blows perpendicular to the direction of movement. Install spurs in the mast steps — the u-joint, vomitus one hand on the handle of the bridle, and the other holding the bridle itself, closer to the back edge of the wing. Properly adjusted the sail is the optimum position relative to the wind direction and if the speed will be sufficient, you significantly pull ahead. Compensating for the thrust of the wing, and lean back a little and help the wind, taking a few steps forward. Then you will begin to pick up speed quickly. To repay it, the wing should be transferred to position head to wind along the wind direction, front edge first.
If the change rate changes and the tack (i.e. wind starts blowing from the other side), the lower spurs of the mast removed from the steps — and the sail-wing is flipped upside down. This design feature allows the sail-wing with asymmetrical profile make full use of wind energy.
I. NASTASYINSKIY