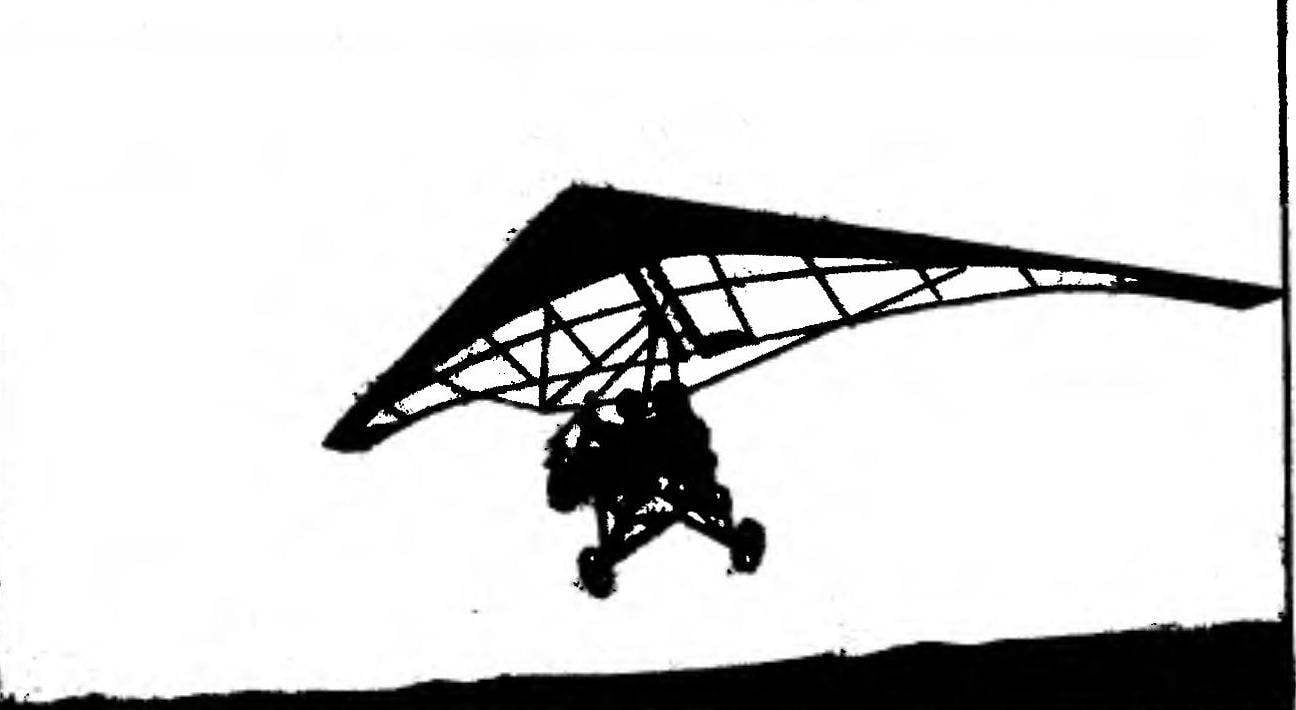 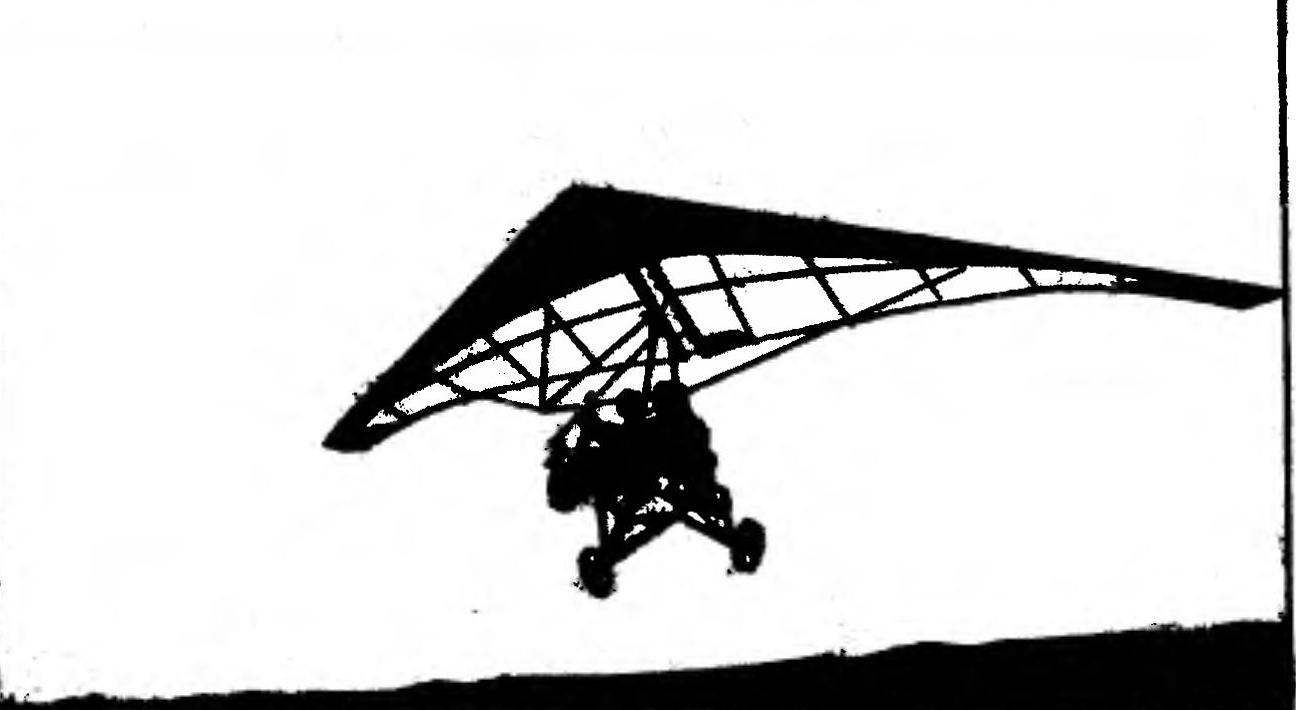 Student design Bureau of Moscow Institute of civil aviation engineers have long occupied a leading position in the design, construction and research of trikes in porridge country. In the “M-K” has repeatedly published materials activities of SKB MIIGA; the last of them (“del’talet becomes a profession”, “M-K” No. 4, 1990| caused a surge of reader interest to the student KB.

One of the most popular — deltalat “Search-06”, which became the prototype of serial trike, available now Rzhevsky aircraft repair enterprise, told the head of the SKB candidate of technical science Nikitin and engineers SKB P. O. Cerniuk and Chernigin.
Trike “Search-06” is a double multipurpose aircraft designed to perform freight, passenger, training, communication and aerovisual flights. The apparatus may also serve as a carrier of various special equipment.
“Search-06” was developed and produced in Student design Bureau of Moscow Institute of civil aviation engineers. The predecessor of the “zero sixth” del’talet “Search-OS” successfully participated in the SLA-87 in Moscow, where she won one of the prizes. “Search OS” thoroughly tested during the three field seasons. However, he was operated and the various regions of the country and effectively implement all the above mentioned types of work. The tests have fully confirmed the viability of the concept developed in SKB MIIGA family deltalyo “Search”.
Pre-production machine, received index “06”, well as have been carefully tested: and 1988 he was in pilot operation in the Moscow region, working as part of a geological party and Eastern Siberia, participated in the aerial photography in the Samarkand region and in Moscow; in 1989, “the Search-06” patap on the Kola Peninsula, under the Anadyr and Makhachkala; in 1990 — damagetolerance shooting near Tiksi.
Testing the “zero sixth” fully confirmed the correctness of the underlying design concepts. In January 1989, on technical documentation developed by our RCS, we started the production of ultralights at Rzhev aircraft repair swoda. Each of serial devices pouchet certificate Peten shelf life, undergoes acceptance tests.
Dataset “P-06” consists of wing with a soft coating and the trike, which is a propeller installation, chassis, seats for pilot and passenger.
The wing is made under the scheme with a “floating cross”, with the spar, sewn bottom fairing of the sail. A frame structure recruited from pipes D16T with a diameter of 4S. SS mm with a wall thickness of 1,S mm, with inner reinforcements and the Central node on the keel and lateral node on consoles. Gain made of pipes, the external diameter of which provide a slight tightness with internal diametre reinforcing elements.
The mast is made of pipe diameter of 1.5 mm 30X, power steering trapezoid of pipes with a diameter 30X1. 5mm with reinforced tubes 25X1 mm. the Frame of the wing can be easily disassembled and laid out in the package. Stretch marks are made of cables type KSAN with a diameter of 3.5 mm, the bottom cross-section lined with wire. Ending ropes made of steel 1Х18Н9Т 3 mm thick; fasteners power curcas runs of steel 3ОХГСА.
Wing skin wykrywacze from fabric brand “Yacht” lofting saponin method, the longitudinal cut. Connection panels are made by seam “zigzag”. The upper and lower surfaces of the profiled battens; their role duritia pipe with a diameter of 10X1 mm, and bent according to the profile of the wing and inserted into latterman.
The wing can be assemble and package length of 4.5 m, which should detach part of consoles.
Power frame the trike is a swivel-cable-and-rod design, consisting mainly of tubular elements. The bottom panel of the trike — a kind of triangle, base of which is the landing gear, and each of the longitudinal tubes, connected at the top of the steel tee, which leaves the bowsprit.
Bearing the tailor made of pipes 48X2 mm in diameter with a length of 1140 mm, the longitudinal rods diameter tubing 48X2 mm long 1S80 mm. Front of the main chassis is made of the tube D16T with a diameter of 48X2 mm length 810 mm, to the axis a seamstress racks are mounted dural gussets and bolts. Front main a seamstress ends of the bent axle with a diameter of 22 mm steel SOHGS, which is pressed onto bearings No. 204 wheel chassis. Stand the main chassis are mounted struts of pipes with a diameter 24х1 5 mm in length 902 mm (longitudinal pipes), and spring shock absorbers (for landing gear).
Vertical back panel suspension system is formed by two vertical tubes with a length of 2015 mm and a transverse length of 495 mm, all made from a tube D16T diameter 45X2 mm.
The frame structure of the wing and the trike can be used for pipe with other options, but strength equal to or greater than specified strength. 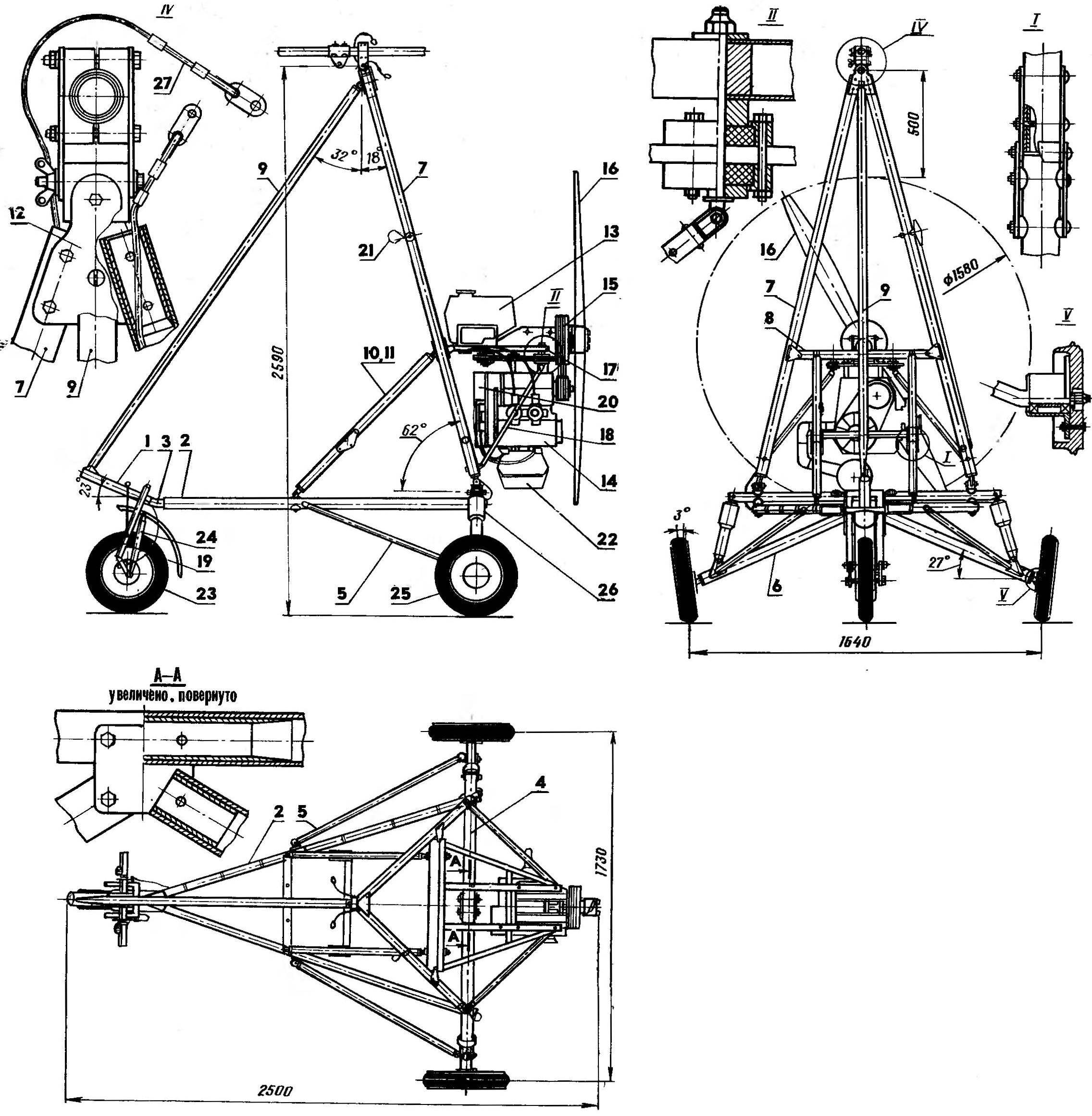 Fig. 2. The adapter to control the throttle valves of two carburetors powerplant trike. 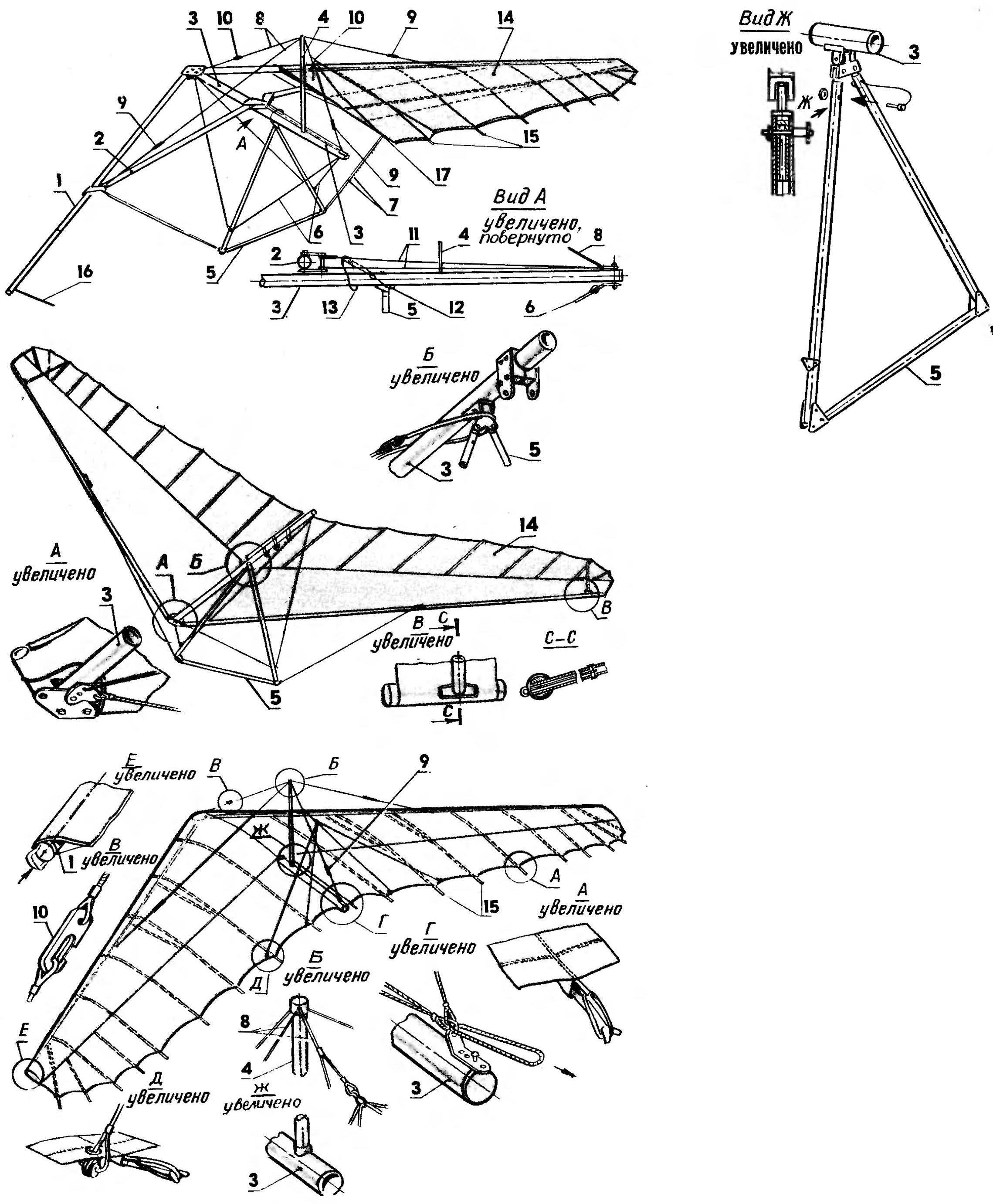 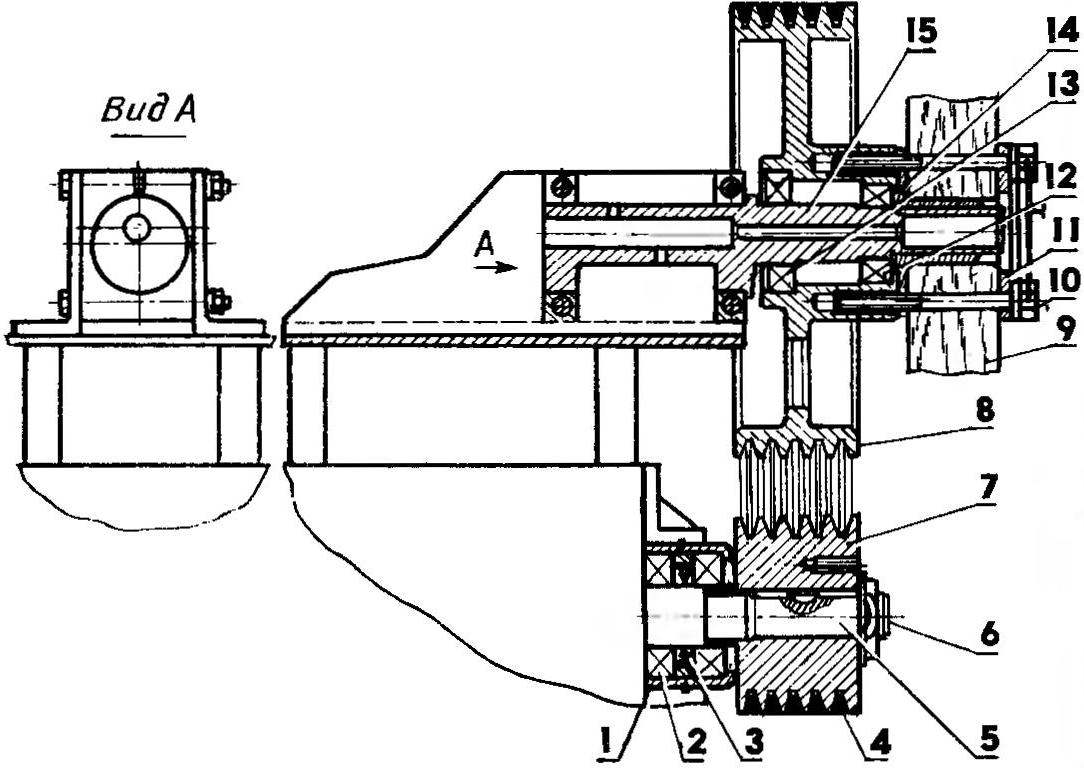 R and S. 4. V-belt gear power plant:
1 – bearing housing 2 — bearings 3 — packing, 4 — V belt, 5 — engine, 6—nut and washer fixing the pulley 7 — drive pulley V-belt transmission, 8 — the driven pulley belt transmission, 9 — propeller. 10 — the mounting bolts of the propeller 11 — pressure washer, 12 – bearing 13 — bearing, 14 hub, 15 — axis screw.
The vertical pipe in the upper part are connected by plates, forming a knot pendants; from below they are pivotally joined to lateral pipes Assembly consisting of a U-shaped plate, pulled the M10 bolt to the bottom longitudinal tube, and the steel bent pipe is pressed into the base of the vertical pipe. The cross member is connected with triangular scarves to pipes, it, in turn, are fixed with two bolts M8 sub frame and breaking the struts of the chair, made of pipes with a diameter of 36X1. 5 mm with lengths of 580 and 350 mm. the Struts of the chairs near the hinge Assembly are connected by a tubular cross bar with a diameter 30X1,5 mm. the Power circuit closes the trike front strut, which is a pipe with a diameter of 36X1,5 mm, sostikuemsa quick connections with the upper and nasal nodes of the trike.
Breaking the struts of the chair allow the pilot to independently, without assistance to fasten the wing to the trike. Raising it over the tie-line and installing the pylon, the pilot can carry out complete Assembly of the glider and flight training.
Through the vertical pipe of the rear panel is a safety wire KSAN-3.5 mm, covering the top of the wing keel tube, and the bottom is fixed with M10 screws fixing the longitudinal pipes and the axis of the chassis. This duplication of the hard elements of the power frame increases its reliability.
Close to the tee on the bowsprit the axis of the fork of the front wheel as a seamstress. Fork welded from steel rectangular tubes 20X 25 at 1.5 mm and has a steel spring shock absorbers; on it — pedal the throttle motor and the brake of the front wheel. The wheel has a mudguard. The pilot’s seat and the passenger consists of a foam cushion (covered with synthetic fabric on nylon-based), which is attached to the belt frame ribbon “agrimony”. Belt power frame of the chair is attached to the lower and rear panels of the trike. The pilot seat and passenger seats equipped with lap seat belts with buckles bystrorazvivajushchijsja.
The power plant consists of a two-cylinder two-stroke carbureted engine RMZ-640, generalnogo gear, propeller, sub-frame and the two struts, fuel tank and fuel lines, devices, run, pedal and controls the throttle valves of the carburetors.
Petroclival reducer V-belt, transmission ratio 2:3. Belt tension is done by turning eccentric to the axis of the propeller in its guides.
The propeller is wooden, laminated, diameter 1580 mm; the hub and the driven pulley it is fastened by four M8 screws.
The sub frame is welded from rectangular steel tubes 20X 25 X 1.5 m, the struts of D16T, pipe. 24 with a diameter of 1.5 mm. the hinge struts and engine mounts are rubber shock absorbers, a Fuel tank capacity 34 l installed on Motorama. The starter motor allows the pilot to launch on the ground and in the air, handle the kick starter is placed on the rear vertical pipe. The tumbler of the ignition system is located right under the pilot seat.
The connection of the wing and the trike is carried out using a suspension unit, allowing longitudinal and lateral angular displacement of the wing relative to the trike.
In conclusion, we note that the staff of SKB MIIGA in collaboration with manufacturers serial ultralights constantly improving its components and systems. In particular, only recently perfected the installation of the machine is a powerful 300-watt DC generator to power consumers on-Board voltage 27 In — for example, radios, cameras, etc. of equipment; developed and thoroughly tested in the tundra double ignition system, dramatically reducing the number of engine failures.