I have developed a detector has not yet been applied in peacekeeping operations to identify and neutralize minefields, no large scale geological or archaeological surveys. Not intended for professionals, and enthusiasts, whose desire to “look underground” is able to meet the design parameters listed in the table, it is an improved version of “metal detector on the beat”.
The sensitivity of the device is improved by beneficial use (clear) the dependence of the length of the probe pulse from the intensity themselves parcels with the introduction of the search oscillator automatic frequency control (AFC). Moreover, additional measures for voltage stabilization and temperature compensation of electronic components is not required.
As predicted by the skeptics “irreconcilable differences” (say, changing the search frequency oscillating circuit in contact with metal in the work zone are incompatible with normal functioning of the aft) has allowed the practice itself. It turned out that when moving the sensor over the investigated surface at a rate of 0.5 — 1 m/s diagram of the device is not in conflict with the frequency detectors having considerable inertia (large time constant).
Already from the analysis of the block diagram to produce such a device is obviously more complicated than any of the previous less sensitive counterparts, including metal detectors, published in No. 8’4 85 and’96 of the journal “modelist-Konstruktor”. After all, my proposed design, in addition to the standard set of exemplary quartz (1) and measurement (2) generators, external inductors I. (search frame-sensor), mixer (3) and the sound of the Registrar VA (phone capsule) — there is new, substantially improve the operational characteristics of the device. This integrator (4), generating a sawtooth signal with an amplitude proportional to the control frequency of the beating, and a shaper of the write pulse (5), which together with the key (6) and source follower VТ represent an analog storage device, retaining the peak voltage of the integrator.
Can not do without a metal detector of the comparator (7), providing automatic transfer of electronics from the zone of maximum sensitivity in the login area beats one-to-one (and Vice versa), without special generator MODES (8), which converts a voltage generated from the source repeater to electrical vibrations of a frequency 200-8000 Hz, and without the above mentioned original system locked loop AFC (9) with a special node that slows the response of the device to excessively sharp change in the control voltage. There are a number of other technical decisions, among which, of course, one can not distinguish “operazioni” and spetsmebel (10).
THE MAIN PARAMETERS OF THE DETECTOR
The dimensions of the printed
PCB, mm…….,…….. 90x70x2
Voltage
power . . ……. .. . 9
Consumed
device current, mA………….. 6
Detection depth of steel items in the black soil in the established dry weather, mm
a) disc 10×2 mm…………..100
b) Disk 100×20 mm………….680
in) disk 500×100 mm (manhole)……..1400
As practice shows, such a structure of devices for the selected method of forming the acoustic signal allows you to listen to both frequencies simultaneously, significantly facilitating the initial configuration of the device at a specific sensitivity. And the reliability is quite high. Even in an extreme situation, when, say, a search frame sensor approaches the massive metal object at the distance at which the difference frequency becomes almost critical (70 Hz), malfunction does not occur in the head phones is heard only by changing the frequency of the beating.
Now about the particulars reflected on the wiring diagram. Model generator executed on the elements DD1.1. Its frequency is stabilized by quartz resonator ZQ1 included in the chain of positive feedback. To ensure excitation of the generator when the power is resistor R1. Available here, the buffer element DD1.2 unloads the generator, and generates a signal with digital levels. Resistor R2 determines the degree of loading and maximum power dissipated in the quartz resonator.
This generator can operate with virtually any resonator with a current consumption of 500-800 mA. And behind him the frequency divider by two (element DD2.1) generates a signal with a symmetrical square wave required for normal operation of the mixer.
Measuring the generator is assembled according to the scheme of the asymmetric multivibrator (transistors VT1 and VT2). The output of the mode-excitation circuit provides a positive feedback capacitor C7. Customizability the elements of Sz — C5, VD1 and search-coil sensor L1. And generation is in the range from 500 kHz to 700 kHz, depending on crystal. 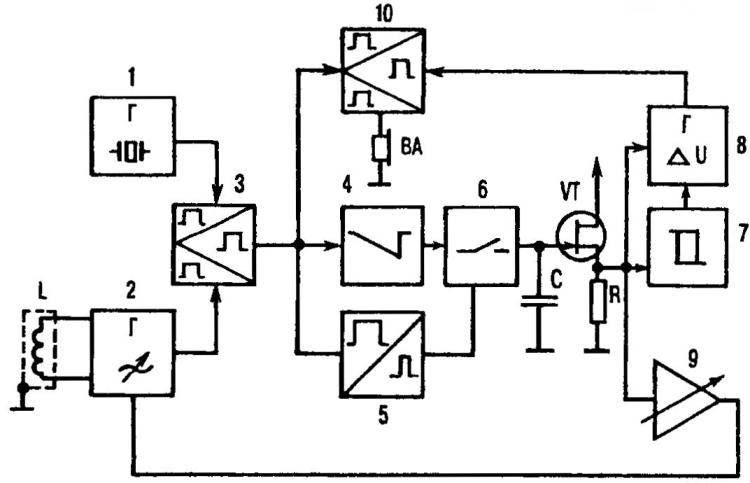 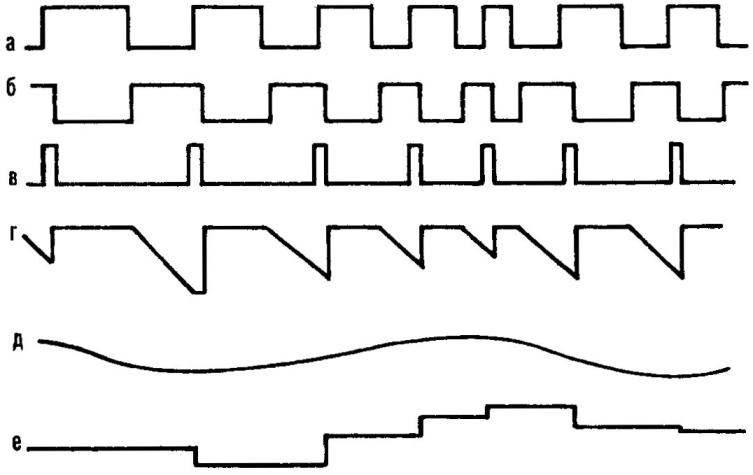 Fig. 2. Plots of voltages and currents at the test points of the device. 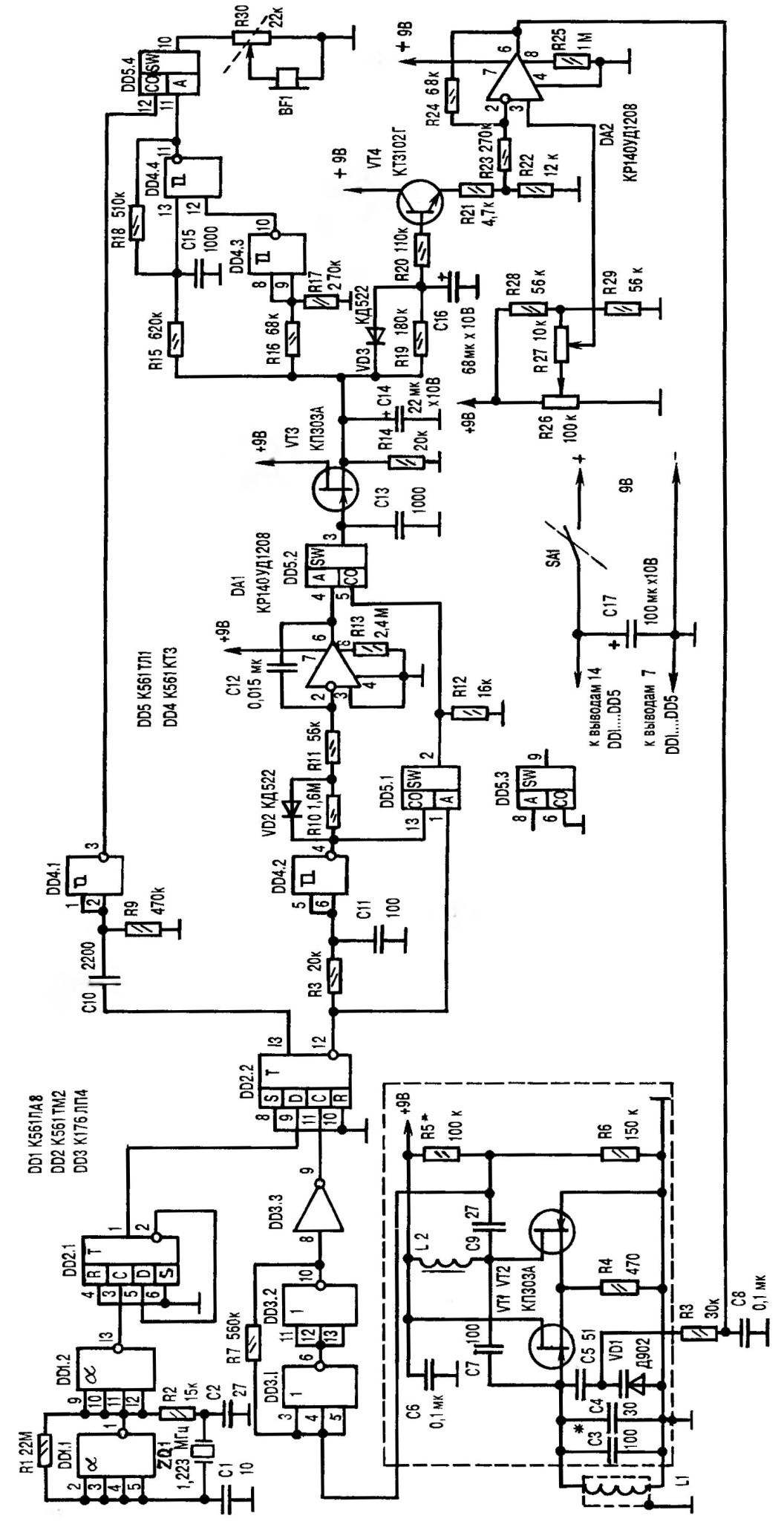 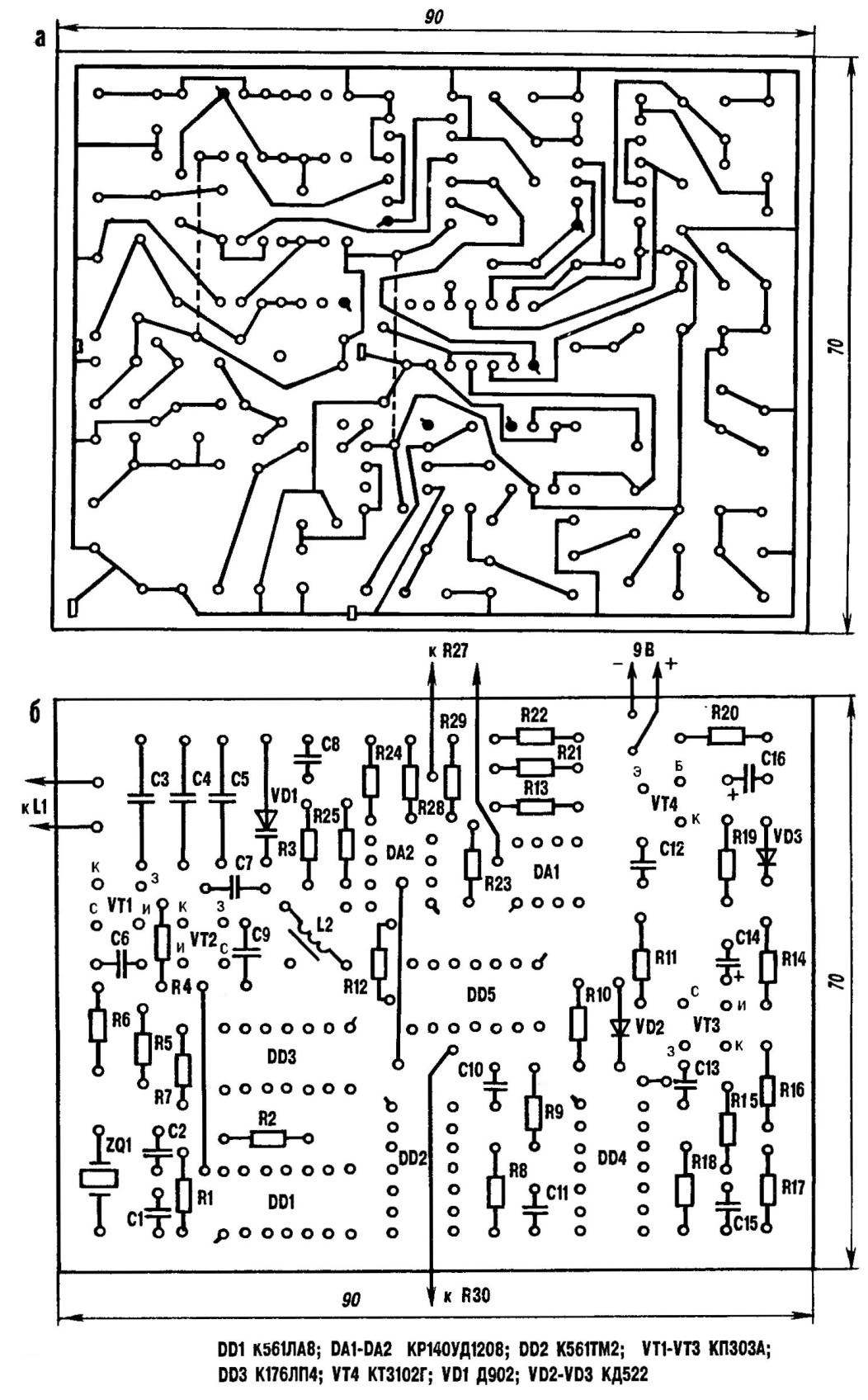 The topology of the PCB. 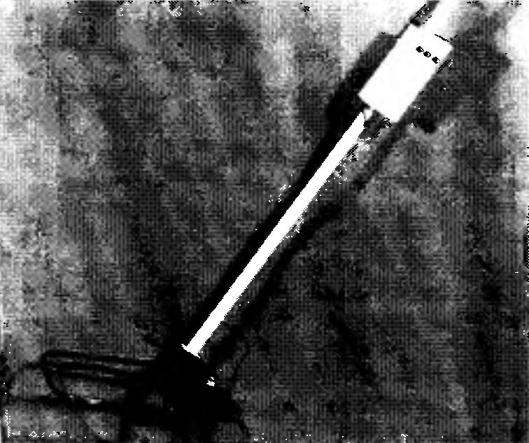 Device, seeing through the earth.

Digital MS can be replaced by analogues of the well-proven series К176. DD1, DDЗ any of the same series, if only to contain the required number of inverters.
Allow replacement and transistors. As VT1 and VT2, for example, fit КПЗ0ЗБ (-W). On the spot /TK acceptable КПЗ0З or КП305 (alphabetic index at the end of the name in this case is not important), and КТ3102Г (VТ4)will replace КТ3102Е.
Quartz — one of those that is designed for a 1.0— 1.4 MHz. The choice of headphones is also not limited. As practice shows, it is quite suitable TONE-1 iliton-2. The varicap Д901 can be replaced by Д902. Diodes VD2 and VDЗ – KD522 (КД523) with any alphabetic index.
To customize the assembled device will need an oscilloscope and …accuracy in work. Carefully examined the whole installation, at the scheme serves the power supply. Then check the current consumption, which have correctly performed the functional design should be 5.5 — 6.5 mA. If the specified values to find and resolve bugs in rations and G. D.
In the operation of the exemplary generator convinced by the presence of at pin 1 of the chip DD2 frequency equal to 0.5 fкварцевого resonator with a duty ratio of 2. Then go to “search” the control point on the PCB where R3 and C8, serves half the supply voltage by disconnecting the IC output DА2. And an oscilloscope connected to the drain of transistor VT2, check the amplitude of the output voltage. It must be from 1 V to 1.2 V. If the deviation exceeds 0.1 V. adjust the number of turns in the inductor L2.
And using capacitors Sz and S4 exhibit the optimal signal frequency of 0.5 fкварца . Moreover, the sensor must be located no closer than two meters from the metal. If necessary, selecting R5, seek to obtain a symmetrical output signal on pin 9 IC DD3 (the mixer should generate a signal of the difference frequency with a square wave, equal to 2). Then, setting the change in voltage on the varicap the frequency of the beating is equal to the 8 — 9 Hz, measure the signal at pin 6 of the integrator DA1 — it needs to be “on the verge of limitation from below”. The corresponding correction is carried out by selection of a nominal of the resistor R10.
By attaching the oscilloscope to the source of the transistor VT3, check the change in voltage level depending on the beat frequency. Resistors R16 and R17 make a logical zero at the output of the comparator (pin 10 of IC DD4) appeared only when fбиений will be above 70 Hz.
VCO adjust using a resistor R15 so that the generator started to work when the signal integrator “out of limits from below”. In the future it will significantly simplify the adjustment of the device before work, as the minimum frequency of the VCO and will correspond to the setting of the metal detector at maximum sensitivity.
Restoring on a printed circuit Board specially sealed previously, the connection of R3 and C8 with DA2, transition to the final phase of debugging of the device. Engine “podstroechnye” R26 turn in the extreme(“positive”)position that will correspond to the maximum frequency of the beating(and fпоискового generator> f model). Then, slowly rotate the engine in the opposite direction, begin to monitor the signal at pin 6 DA1. Notice how (at a certain position of the engine R26) on the oscilloscope screen emerges the moment of impact of the signal in the capture zone of the AFC.
Continuing the handle rotation trimmer 1327, achieve a beat frequency equal to 10 Hz, while checking the operation of the AFC (desire signal to return to its original state).
The engines of resistors 1326, 1327, you must move slowly, given the large inertia of the AFC. At the same time in the head phones will listen minimum frequency VCO and weak clicks and f beats. Some 1
cases, it may be the effect of “swimming” sound relative to some fixed state. In this case, it is necessary to select more accurately the ratio of resistors R23, R24 or decrease the values of 1319, R20.
As already mentioned, the electronic part of the detector (which is almost the whole device) can be mounted in any suitable housing mounted on the handle. Care must be taken to search frame sensor, and connecting wires were rigidly fixed relative to each other. Even a slight vibration of these parts occurring due to the movement of the operator can generate a false signal (especially at the maximum sensitivity of the method and lack of experience with the device). For the same reason, the shoulder should be worn behind the back with a bayonet up (away from the frame sensor). And the metal tips on the laces of the boot operator is unacceptable. Bring them interference threaten to nullify all the efforts of such an acute sense of the instrument unearth something with which she so unwillingly parted.
Working with metalldetektoren little different from the actions of modern manual metal detector. Of course, such precise devices need adjustment. In our particular case is the rotation of the engine podster-echnolo resistor R26 in the extreme (“positive”) position, and R27 in the middle. Filing for instrument power supply, rotate the knob R26 in the opposite direction until the head phones signal VCO. After this trimming resistor R27 set the required sensitivity. But with R26 arbitrarily put up (when the device operation mode beating “one to one”) f6иений in the range of 200 -300 Hz.
Aft and VCO, in fact, turned off, so the search are as usual. To better define the location of small items frame sensor brings to the search area either horizontally (rounded corner forward), or under an inclination of 45 — 90° to the sample surface (with a clear positional advantage of one of the sides of the frame).
Yu STAFIYCHUK,
The Republic Of Moldova