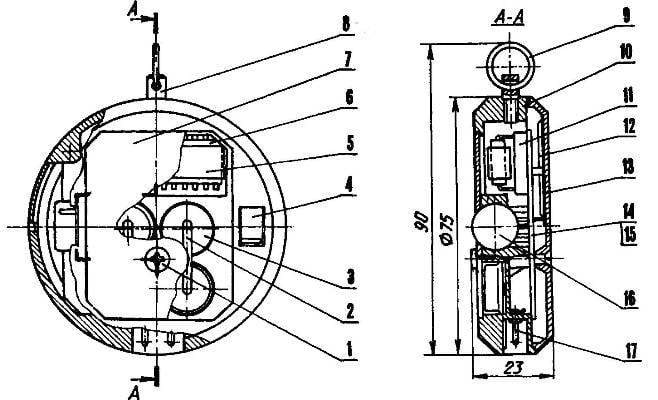 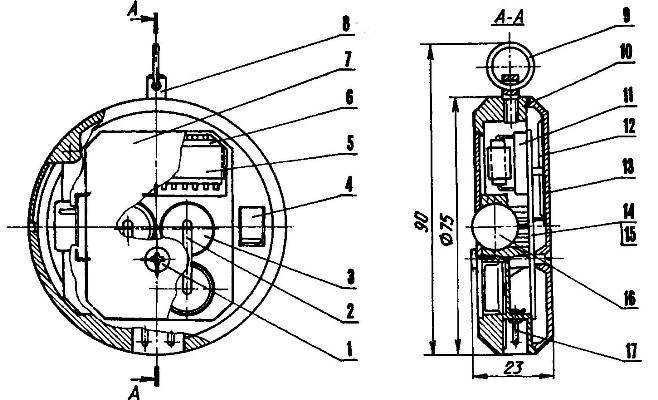 The development of purpose, verbal stimulation initiative attitude to improve the health and addictions… assistance in the development of these and other qualities will have the device, protected by patent of Russian Federation № 2109523. The design is presented to the readers.
The attractiveness of the development attached as availability of manufacture in a home workshop, and proven method of self-hypnosis on Cue with elements of neurolinguistic programming, the underlying operation of the device. With regard to the effectiveness of the device, it depends on many factors, including the duration of the verbal action. The recommended period of continuous influence of the formula of suggestion, aimed, for example, for high-quality preparation for the exam, from 10 days to 30 days.
As can be seen from the circuit diagram, the key mobilizer of the abilities includes a two-frequency master oscillator DD1.1—DD1.3, a multi-bit binary counter DD2, DD3, reprogrammable storage device (ROM) DD4, digital to analog Converter (DAC) R7—R14 and the output stage DD1.4, the load of which is an audio Converter BQ1 type CP-5 or CP-22.
When you turn on the power supply via the capacitor C4 and the resistor R6 begins to flow the charging current and to install (reset) circuits DD2, DD3 to its original state. The output potential of the high order counter (pin 13
DD2.2) becomes equal to logical “O” and opens DD1.3 (terminal 9) and ROM (findings 20 and 22). Through the diode VD1 to the logic element DD1.3 is disconnected from the conclusion of 6 DD1.2. Generator (DD1.2 and DD1.3) are formed of clock pulses with a frequency dependent on the capacitor C2 and the resistor RZ, R4. Preference 16,11 or 8 kHz. Continuous adjustment of the frequency by variable resistor R4.
Now starting to work counter to the logic elements DD2.1 and DD3 with sync differential chain СЗR5. And since its output level is connected to a ROM, it extracts the relevant information — the component parts of formulas verbal suggestion, recorded in advance in the form of codes in electronic memory.
Digital to analog converters resistors R7—R14 converts the codeword to an analog signal. For coordination of the DAC with audio Converter is the output stage DD1.4 is operating in linear mode. Moreover, for noise reduction the latest equipped with a filter frequency (С5R15) with a cutoff frequency of about 16 kHz.
After using the entire capacity of the ROM (32768 counts) cycle of reading and decoding information is repeated, if the jumper S1 is connected to pin 13 DD2.2 (double playback of the verbal formula). When connecting the same to the S1 terminal 12 DD2.2 inspires the phrase is played back only, and the terminal 14 or four times. A logical “1” appearing at the corresponding terminal (12, 13 or 14) DD2.2, locks ROM (vyv. 20, 22) and the output stage DD1.4 (vyv. 13) for reducing power consumption in the pause mode, and simultaneously turns off DD1.3 (vyv. 9).
On the elements DD1.1 and DD1.2 starts to work the master oscillator. Its frequency is determined by the values of C1, R1, RZ, R4, is the starting parameter for setting the time interval between the phrases of suggestion. The pause duration will be one- , two – or fourfold depending on the jumper connecting S1 to pins 12,13, or 14 logic element DD2.2.
Strictly speaking, the pause lasts until the appearance of a logical “O” on the output connected to jumper S1, after which the working cycle (play + pause) is repeated. The length of the disposable play choice is determined by the frequency oscillator, working on the elements DD1.2 and DD1.3 chip К561ЛЕ5, and is configured with the capacitor C2 together with the resistors RZ, R4. And R4 is mainly used to adjust the “skorogovorki”. It is recommended to set this at the top (the scheme) the position of the slider of the variable resistor correspond to 120, and in the right — 480 words per minute. 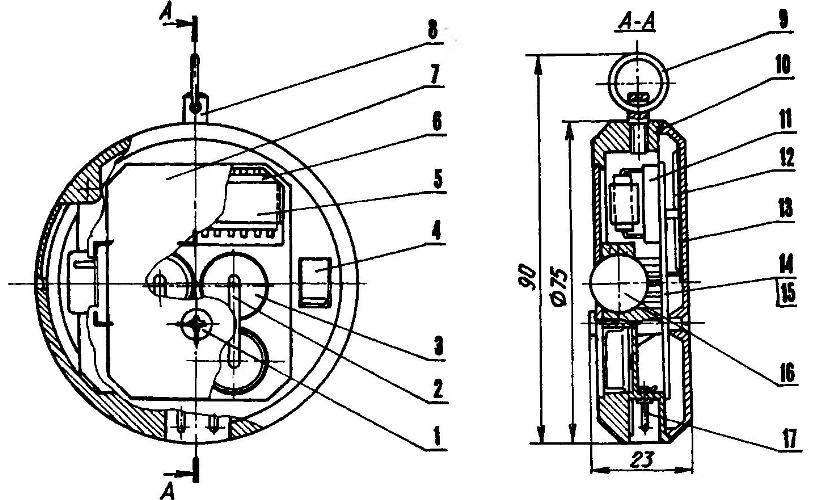 FOB mobilizer abilities:
1 — self-tapping screw (2 PCs); 2 — battery terminal (2); 3 — accumulator D-0,06 (4 PCs); 4 — volume control a sound transducer; 5 — synthetic ring ribbon (to extract the ROM chips from the panel); 6 — chip ROM 27с256; 7 — battery compartment cover and replace the ROM; 8 — spring; 9 — a keychain ring pendants; 10 — body; 11 — the panel of ROM chips; 12 — audio Converter SN-Z; 13 — housing cover; 14 — double-sided printed Board; 15 — PCB mounting; 16 — regulator “skorogovorki” with built-in power switch; 17 — pin connector (for recharging batteries, 2 PCs.)
To reduce the size of the product you can go to replace R4 and RZ one constant resistor whose value should be chosen with orientation to normal “skorogovorki” 120 words per minute. To configure should be included in the supply circuit of the milliammeter and stopwatch to measure the time suggestible phrase. At the operating frequency of 16 kHz and the current “speech” about 9 mA (a pause of about 3 mA) duration one-time playback of the phrase should be within 2 s. For a frequency of 11 (or 8) kHz at constant other conditions, a benchmark can serve as the stopwatch with 3 (or 4). The preference for these frequencies because they are used in the computer “sound” technologies.
Pause duration is configured by the capacitor C1 and resistor R1. Adjustment is performed on the readings of the milliammeter and stopwatch with an indispensable account of the position of the jumpers S1 directly related to the multiplicity of work cycles. Recommended guidelines: 4-time repetition and pause lasting about 20 min.
The sound quality formula suggestions depends on the synchronization counter (DD2.1, DD2.2 and DD3) differential chain C3R5. Naturally, influences and digital to analog Converter. The sound of the formulas of suggestion is more “clean”, if the resistance included in the DAC resistors correspond to the (increasing their numbers from R7 to R14) a number of denominations to be deployed with the division ratio 2.
Phrase (verbal formulae) the suggestion must be brief and categorical motive, without using the particle “not”. Instead of flimsy stamped “NO SMOKING” signs should be used positively perceive the word-orders of the “stop SMOKING” or “AVERSION TO SMOKING.” In the preparation of the formula of suggestion, we can better identify the end goal, not forgetting the mood for its early achievement. For example, efficiently seen such provocative phrases as “WELL EXAMS”, “CHANGE “DRUGS” SPORTS”, “NORMALIZE BLOOD PRESSURE”.
“Stitched” ROM special programmer, which is prepared using a personal computer (PC) with the sound card. So, in wav format, 16 kHz (8 bits) you can record sound with a duration of 2 s, using wav 11 kHz (8 bit) will provide a three-, a wav 8 kHz (8 bits) — a four-second recording.
When creating files used sound card driver, menu software and standard technology of PC user. First, select the desired format. For example, the wav 11 kHz (8 bit). By the way, in the same 11 kHz should work FOB mobilizer abilities when it plays a formula suggestions at normal speed, i.e. with a period of a single ROM with a duration of 3 C. Preparation of files much easier, if you use specialised audio program such as Cool Edit 1.50.
The effectiveness of the device is significantly increased if formula suggestion sounds a musical background. Therefore, when preparing the file for the programmer recommended mixing: verbal entry plus fragments of any harmonious works.
To do this, through the microphone or line-in record on the PC disk passage of any musical works with a duration of 30-60 s. Then, from the record “mouse” in the computer allocate the waveform 9 with sites that after listening copy via the clipboard into a new file. Cut from selected and controlled by the most suitable hearing not to exceed the total duration of the sound 3, is transferred (again, via the clipboard) of the obtained segments the future of the musical fragment to the next file assigning well-remembered name-number: for example, fragmnt1.wav. Similarly prepare and retain in the directory created on the drive, about seven future musical accompaniment (from fragmnt1.wav to fragmnt7.wav) with different rhythm and tone.
A circuit diagram of the device (the volume control of the audio Converter is not shown) 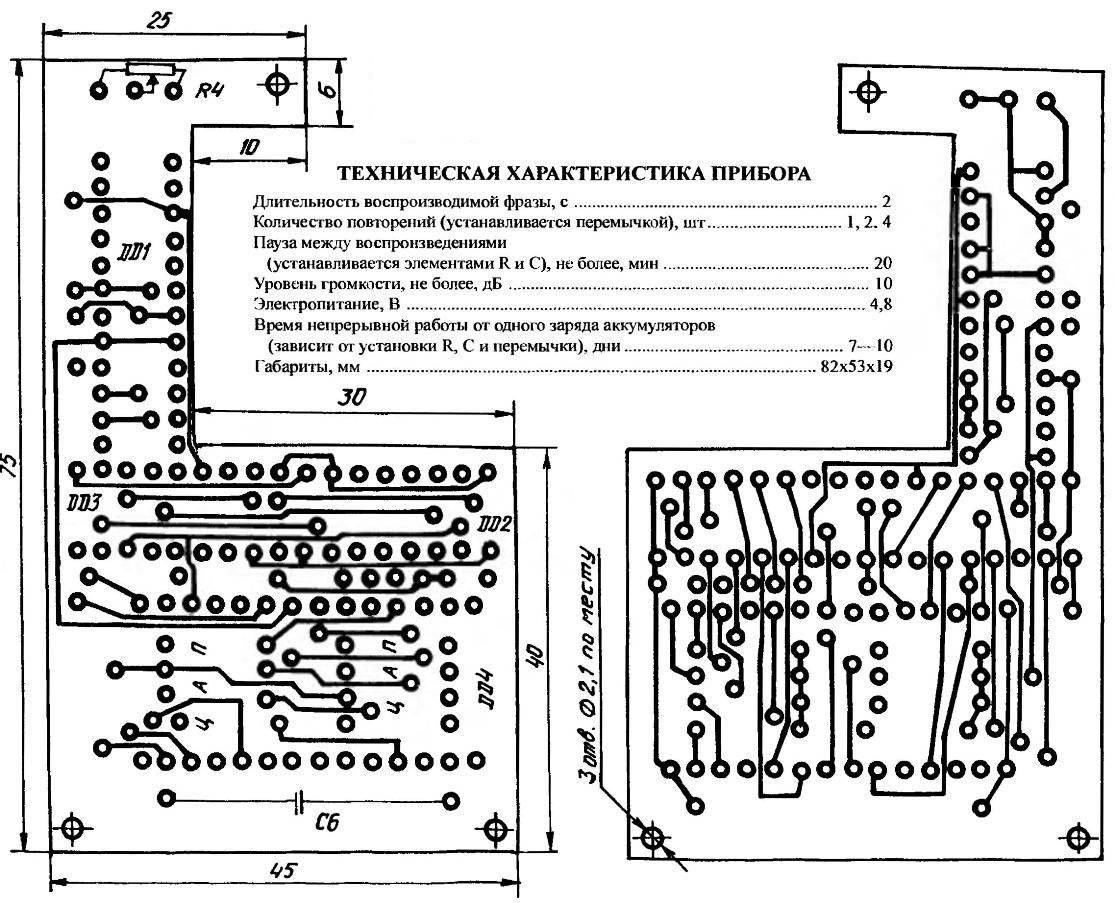 Option double-sided printed circuit Board with the symbol on it of the locations of circuits, regulator “skorogovorki” and electrolytic capacitor
Then go to the file with the formula suggestion. Text lash out in accordance with the foregoing recommendations and record through the microphone input of the sound card of the PC in the selected format wav 11 kHz (8 bit). Honed to perfection the phrase say 3-5 times with a small (to facilitate selection of a waveform) intervals. To get the right tone when writing formulas of suggestion it is advisable to mentally recite the words addressed to the man lying on the couch. Select the most impassioned and short phrases.
Remove computer waveform “empty” areas and making sure that the total duration does not exceed 3, transferred via the clipboard to almost the formula of suggestion to a new file by assigning the appropriate (e.g., “protivocesterngo” bros_kur.wav) name for quick recognition.
Directly to enter into the programmer — device firmware ROM — preparing for the third file. It is created by mixing the previous terms already on PC: formula suggestions and pre-selected melodic fragment. It is at this stage strive to achieve the harmony in which rhythmic and tonality of the musical accompaniment correspond to the meaning of words, and the level of its sound about half the volume of the phrase itself. The mixed file
is saved with the assignment easily recognizable name, for example, bros~kur.wav.
“Firmware” ROM is performed in strict accordance with the instructions for the programmer. The signal coming from the file prepared for sewing, must ensure that the playback volume level of a whisper.
If neither the user nor the programmer, nor even a simple PC, the one thing remains: to contact any of the companies for service of cash machines. The equipment there is, as a rule, good, and experienced professionals. So there is every reason to hope that the “firmware” ROM will be done well.
“Flashed” the ROM soldered to the bilateral printed circuit Board from foil fiberglass.
A. SOLOVIEV, Krasnoyarsk Krai