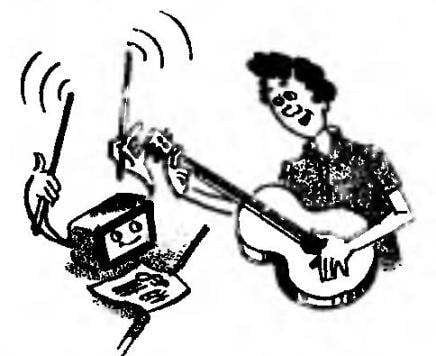 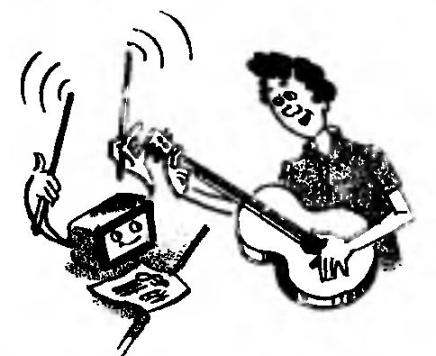 When learning to play a musical instrument to set the tempo often use a mechanical or electronic metronome. Last and I made one of the most popular modern developments. However, during operation it was found that this device is inferior to its mechanical counterpart, with adjustable pendulum, knob, jiggle measured which are perceived as the movement of the baton of the conductor.
Urgently had to make a new metronome with a visual indication. The resulting design was satisfied. And most importantly, such an electronic device was soon in demand by teachers, musicians for the planned lessons with the pupils, tutoring.
As can be seen from the circuit diagram, a part of my metronome includes tempo generator, generator indicator lights and warning sound. Food is the dry battery with a nominal voltage of 9 V.
Generator pace, made according to traditional canons on the timer DD1, produces rectangular pulses with a duty ratio close to 2. Timing RC-circuit it consists of resistors R1—R3 and capacitor C1. Variable resistor R2 changes the oscillator frequency rate in the range from 6 to 40 Hz.
The resulting signal output 3 DD1 fed to the input 14 of a decimal counter-divider on the chip DD2, which outputs (via current amplifier transistors VT1—VT10) loaded with LEDs HL1—HL10. At each IC output high DD1 level appears consistently. And only for the period of the clock pulse generator rate, and therefore the LEDs light up one after the other, creating the effect of “traveling wave”.
Simultaneously, the signal through a differentiating chain R4C3 is supplied from the output 11 of the chip DD2 to the input of transistor amplifier VT11—VT12 total load which is the dynamic head of BA1. R4C3 chain is used for shortening the rectangular pulse coming from the output 11 of the chip DD2, so that the loudspeaker you hear a click, similar to the countdown of the mechanical metronome. The frequency of the sound emitter can vary in the range of from 0.6 to 4 Hz resistor R2 generator pace.
The elements of the device, with the exception of LEDs, the variable resistor and the power supply placed on the PCB of one-sided foil fiberglass dimensions 65x42x1 mm. Topology and dimensions of the Board can vary, since they depend on the shape of parts and the enclosure.
In the author’s version, for example, used the plastic case from a child’s toy “balalaika”. In GRI-
Fe managed to position the LEDs inside the main cavity is a printed circuit Board, the transmitter of sound and batteries, and outside — the knob of the tempo and the head of the switch. 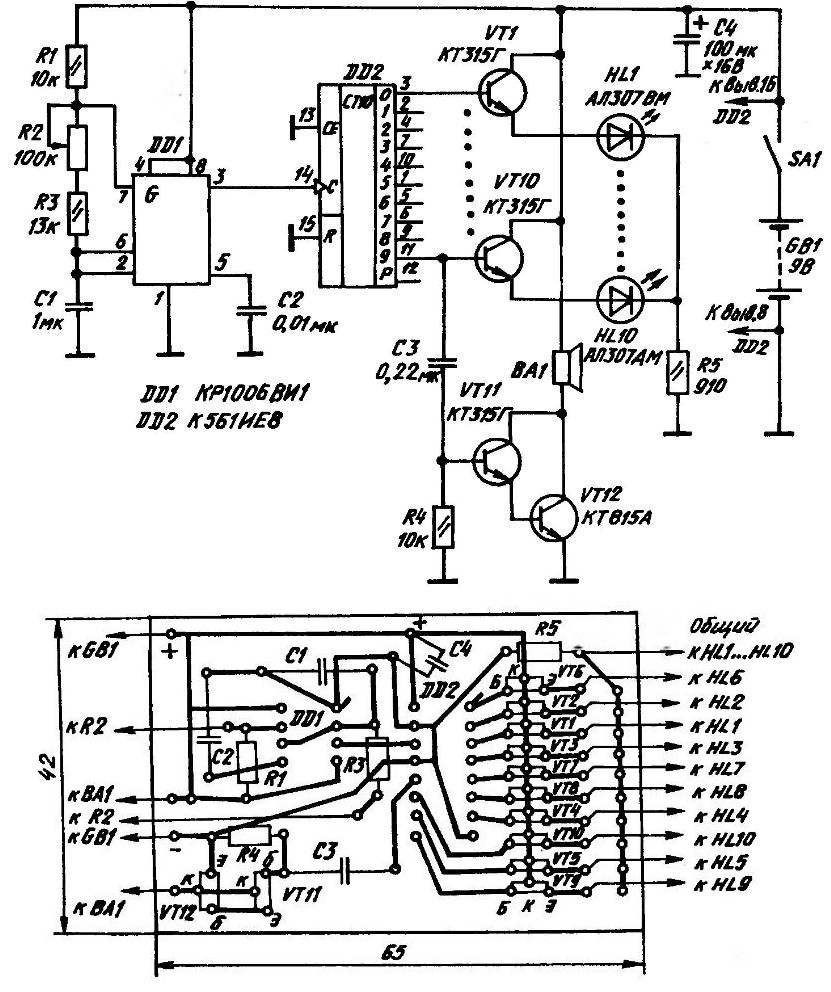 A circuit diagram and a printed circuit Board, a homemade electronic metronome with led indication
The device used IC КР1006ВИ1 (DD1) and К561ИЕ8 (DD2), regular type resistors MLT-0,125 AC — SDR-S0 class A, kt315g transistors (VT1 — VT11) and КТ815А (VT12) without heatsink, capacitors K73-17 (S1—Sz) and C50-6 (C4). As alarm BA1 used dynamic head 0,1 GD-12. Switch SA1
became widely known MT-1, but it can be any other switch.
In fact, this metronome is quite a wide possible replacement of parts. In particular, the location of the chip К561ИЕ8 a good idea to work К176ИЕ8 as transistors VT1—VT11 acceptable КТ3102А, and VT12 is well suited КТ817А. Capacitors can also be replaced by equivalents in accordance with the diagram denominations, and instead of a dynamic head — phone to settle for a cap. KM-2.
LEDs HL1—HL9 is desirable to use a calm green glow. But the last place (tenth), which must light up simultaneously with the click of a metronome, it is recommended to install АЛ307АМ red. The source of power supply is a galvanic battery GB1 “Crown”.
Assembled without errors and causing part of the metronome works immediately after switching on. If necessary, make some adjustment. For example, the frequency and extent of regulation of the pace set by changing resistance values of resistors R1—R3 and the selection of the capacitance of the capacitor C1 from the relation f = 1,44/(R1 + 2R2 + 2R3)C1.
The desired brightness of the LEDs is adjustable during the adjusting of the resistance value of the resistor R5. The scale of the variable resistor R2 is calibrated by comparing the frequency of the sound emitter with a frequency of oscillations of a mechanical metronome.
G. SKOBELEV, G. K u R g a n