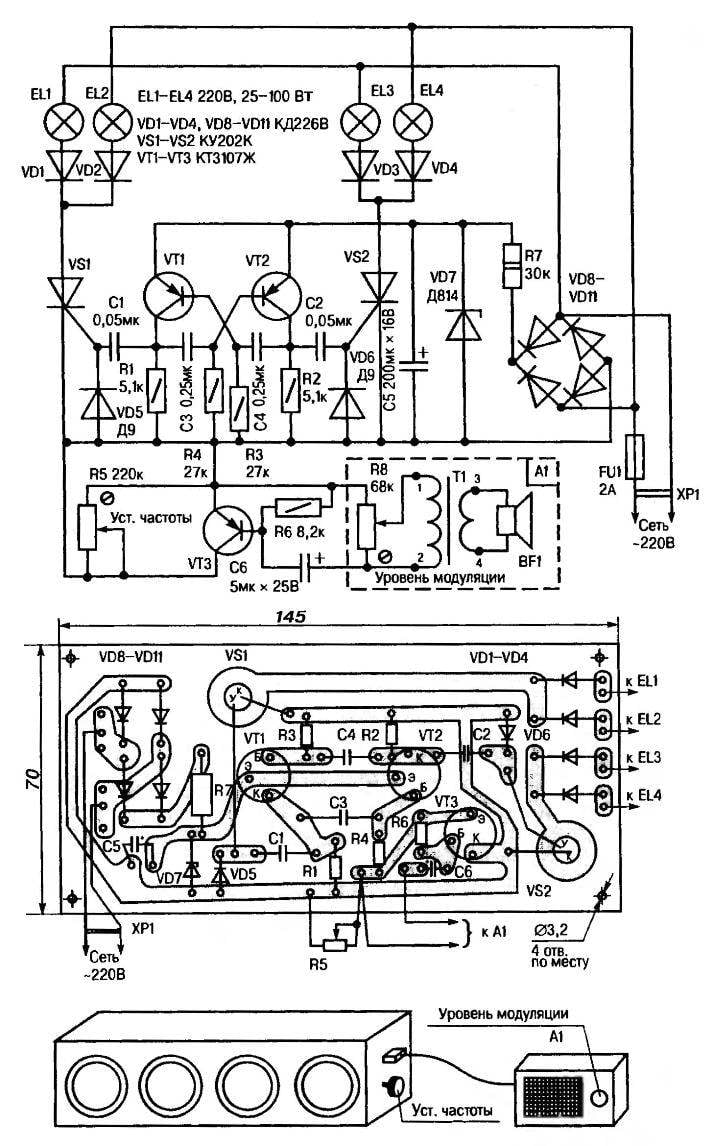 Deserved recognition and popularity enjoyed by amateur radio operators is quite simple and reliable circuit includes flip-flop on the two transistors and a pair of thyristors controlled them. It allows you to alternately switch the four incandescent lamps or garlands for the effect of “running lights”.

The switching frequency is adjusted by the variable resistor having a maximum resistance of 22 ohms. However, the ability of the circuit design can be expanded by increasing the face value of “nick-change” to 220 ohms. In particular, by simply moving the slider of the resistor can not receive, for example, the additional effect of “mysterious” flickering lamps. 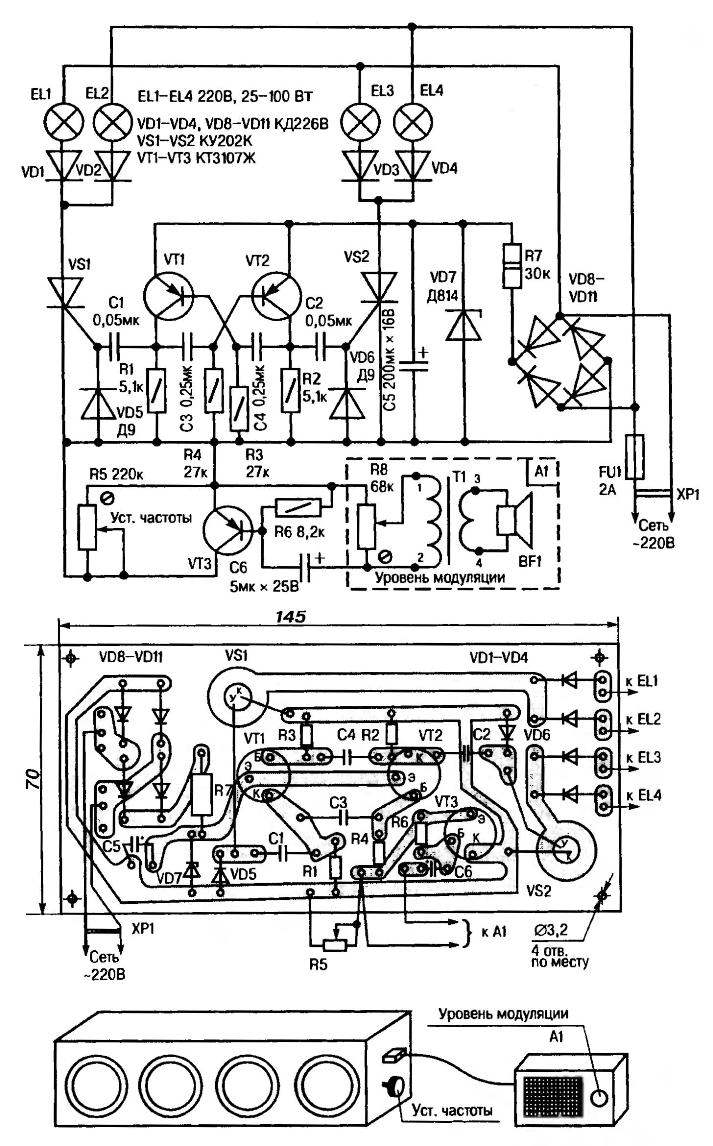 Schematic diagram of the PCB topology and general appearance of the color-improvised music device for discos
Impressive effect on present and switch the lamps to the music, which is easily achieved by entering into a schematic diagram of the simplest odnotranzistornogo modulator. Moreover, with the color of light in different colors or using contrasting colored lampshades (filters) the former “flasher” acquires the properties of the original tsvetomuzykalny device. Control – automatic, by a kind of “microphone” in which quality can be used ordinary translational speaker connected to the transistor-based modulator through the electrolytic capacitor 5 uF.
When you install this dinamika- “microphone” near the sound source (tape recorder, radio, stereo speakers) are rather interesting effects. In particular, with the advent of sound vibrations in the air diffuser into motion and rigidly associated with it magnetodynamic coil system, which is induced in the turns of the EMF. The resulting electrical signal stumbles – a transformer T1 (matching element, loaded by potentiometer R8) and a capacitor C6 on the base of transistor VT3 amplified and modulates the operation of the multivibrator, resulting in continuous switching tubes to the rhythm of music.
The advantage of the modified my circuit design as compared to the previous lack of a direct wired connection between the sound source and the light and music installation. In addition, there is a real possibility everything mobile discos, able to work equally well both at home and on the stage, with the installation of dinamika- “microphone” without additional amplifier about musical instruments.
Mountable device sizes 145x70x1,5 mm PCB of one-sided foil-Gety Nax or PCB. As the fixed resistors are used widespread and cheap MLT. “Peremennik” R5 – Type SP-1.
The capacitors C1-C4 may be of any type, with nominal values, as shown on the circuit diagram. But bolyieemkostnye – Electrolytic designed to work with an operating voltage of 16 chains in the (C5) and 25 B (C6).
Instead of transistor KT361 KT3107ZH applicable or even MP39 – MP42 with any alphabetic index at the end of the name. Permissible replacement and thyristors (equally acceptable KU201 and KU202 with indexes from K to H). As the valves VD1 – VD4, VD8-VD11 fit KD226V and their equally powerful counterparts. Diodes VD5 and VD6 – D9 are well known, and as a zener VD7 can successfully act D814. Electric lamps EL1 – EL41 should be designed for a working voltage of 220 V. The power of each of 25-100 watts.
Speaker – “Microphone” better use of translational (in conjunction with a transformer and potentiometer) with a capacity of 1-3 watts. Suitable also as a design unit in a separate housing comprising a one-head dynamic trehvattnuyu (preferably bolyierazmernym diffuser), the output transformer or TVZ TCEs and variable resistor 33 to 82 ohms.
The very same light and music device can be made in the form of a box on the front panel is removed ceiling bulbs, and on the side wall – installation switching frequency handle and socket for connection gromkogovoritelya- “microphone.”
M. POVALYAEV