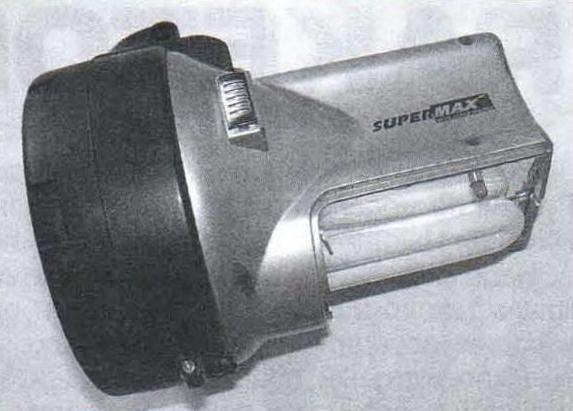 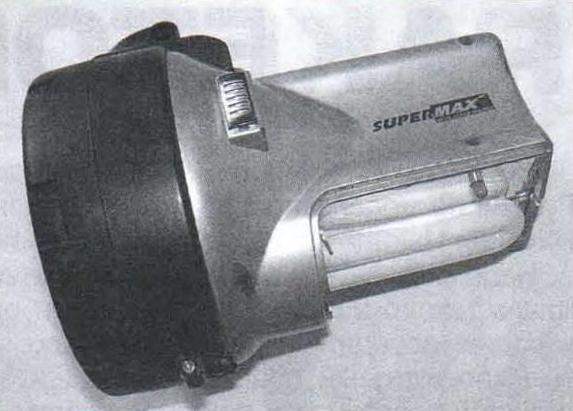 On occasion purchased a portable led flashlight in China with the battery inside. The flashlight has the ability to switch between a cluster of eight super-bright LEDs and a krypton bulb for a voltage of 5.4 V. Inside there is also a charger for the battery. In addition, the lamp is combined with a lamp – a fluorescent light with a power of 6W, powered by using a special voltage Converter 150 – 6th Century

Lighting using energy saving lamps (hereinafter – EL) of the type Osram Dulux S7W implemented in this design, very convenient for many purposes. With it you can read in the tent, in camping, in marching conditions continuously for six hours due to low power consumption lamp with fully charged built-in battery. Testing flashlight lamp with energy-saving lamp “strength” has been conducted in rural areas throughout the year. Schematic of the voltage Converter seems to me a very successful and valuable for replication in other structures, and for use ready Converter Board to power up ELECTRIC power up to 8 watt aquarium light. Electric circuit device of the Converter, copied from the printed circuit Board and is shown in Fig.
The principle of operation of the device. The device realized according to the scheme of push-pull pulsed voltage Converter, operates with a frequency of approximately 112 kHz. Based on the TL494 chip – ready pulse width modulator signals, so the circuit and the device, overall it is a very simple. At the circuit output is set high-voltage rectifier diodes doubling the converted voltage. In the transducer as a T1 uses high frequency transformer brand EL33-ASH from the power supply “legacy” printer Canon BJC-2000. After measuring the resistance of the windings relative to each other revealed that the ratio of their (I to II) is 1:20.
Tap in the primary winding is made exactly from its middle (that is, the winding in this case consists of two halves). Because transformers type EL33-ASH from the old BP printers I have accumulated a few, I disassembled one of them and can say that the secondary winding consists of 220 turns of wire of diameter 0,3 mm. 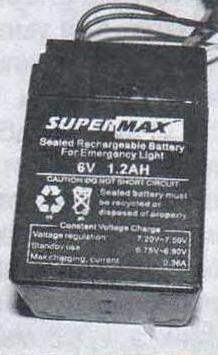 The battery of the flashlight with the transmitter
Fixed resistors R1 and R2 define the width of the pulses at the Converter output. The scheme can be simplified (and not to use R1, R2), with 4-th output DA1 must be connected to ground (minus power supply).
Resistor R3 (together with capacitor C1) sets the operating frequency which can be adjusted in a small range: when reducing the resistance of the resistor R1 and the oscillator frequency of the Converter is increased; if you increase the capacitance of the capacitor C1, the frequency decreases and Vice versa.
About the details. The chip TL494 can be replaced by 1114ЕУ4 is entirely analogous. The power MOS-field-effect transistors VT1, VT2 are characterized by low switching time and simple control scheme. Replace them IRFZ46N, IRFZ48N (the higher the number in the marking is the analogue of the powerful current). 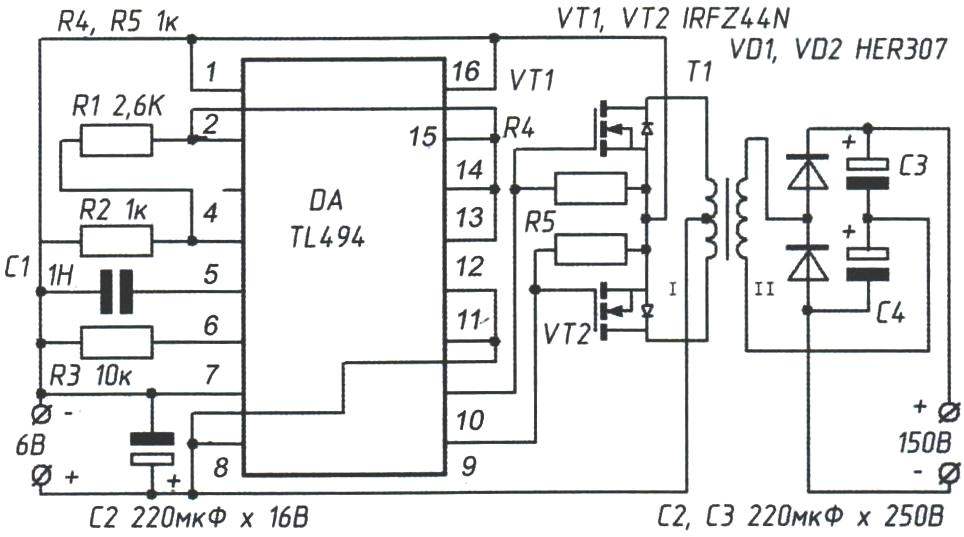 Electrical circuit of voltage Converter 150 – 6
Instead of pulse rectifier diode HER307 suitable HER304 – HER306 or KD213 with any alphabetic index.
Oxide high-voltage capacitors C3 and C4 with a voltage of at least 200 In – class KKH, Carhop, NSO СD11GН, AN-ЕLВ043.
The power Converter is supplied from a portable battery with a voltage of 6 V and a capacity of 1.2 A/h.
Protecting the circuit from overload and reverse power (when using the finished boards in other structures) can be implemented through a fuse and a diode in the forward direction at the entrance.
A. KASHKAROV, St. P etersburg