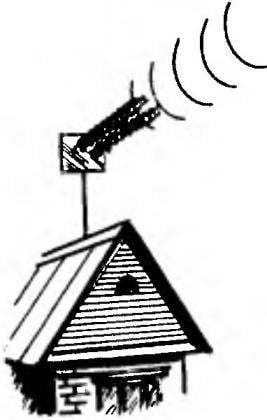 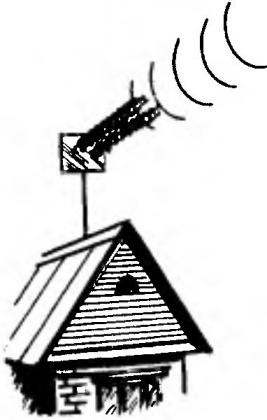 For sure the television reception in the range of decimeter waves, recommend using double spiral antenna, the production of which under force even to the beginner. With linear polarization, a sufficiently narrow radiation pattern (width of the lobe in the horizontal plane is less than 35°) and the gain is nearly equal to 22 dB, this device is more compact than the widely known multiple-element designs such as “wave channel”, a bandwidth significantly exceeds them!
A conventional spiral antenna with number of coils is more than three characteristic of circular polarization. It occurs where the diameter of each of the coils of the active element is approximately equal (taking into account the velocity factor) of 0.31 ƛ where ƛ is the wavelength, which must be calculated in this unit. However, if you are not one, but two active elements having opposite each other the wrapped (when one coil is twisted from left to right and another from right to left), it becomes possible to effectively radiate or receive linearly polarized waves.
For obtaining unilateral directivity and increase the gain of this antenna is the reflector. It is set generally 0.1 Зƛ, to the place of soldering (beginning) of the spirals.
To important design parameters include the angle of winding of the spirals, which is recommended to be selected in the range from 6 to 24°. But often limited to the same rise at 14°, which, when the coil diameter of 0.31 l corresponds to the helical pitch of 0.24 ƛ .

Two helices in the same team:
1 — rod-latch (Micarta or textolite, 2 or 4 pieces); 2 — spiral right – (copper wire d2…4, L6180); 3 — sleeve weld (2 or 4 PCs); 4 — reflector (galvanized steel sheet, s1); 5 — device matching (brazed structure of two identical segments of coaxial cable РК100); 6 — feeder (coaxial cable RK75); 7 spiral left (copper wire d2…4, L6180); antenna conventionally not shown. Below — diagram of the matching device.
The device with such dimensions has a wide bandwidth. Assuming a maximum standing wave ratio the ratio of frequencies within which the antenna operates satisfactorily, is determined as of 1:1.6. Well, the input impedance has almost no reactive components and is usually 120-150 Ohms.
Of course, practice makes to these generalized recommendations about changes, and the proposed development is no exception. An example of refinement can be, in particular, active elements. Them in the design of the receiving antenna UHF are two helices of 6180 mm segments of copper wire with a diameter of 2-4 mm. Each contains 12 turns. Winding the opposite, is performed on the tube or cylindrical blank (for example, Bank from-under paints), and subsequently at step 127 mm outer diameter of coils was equal to 164 mm.
As supports for coils are used, getinaks-tions or textolite rods (one or two to a spiral), with pre-drilled under the coils of the holes. The rods are inserted with an interference fit in a metal sleeve, welded end-to-reflector — galvanized steel sheet size 1300x500x1 mm.
Approval of the entry of such antenna with impedance of 75-lot feeder is made using identical segments of coaxial cable РК100. Braid are connected symmetrically with reflector and spiral — with its Central core. If the axes of both helices are located in the horizontal plane, the antenna has a horizontal polarization, and when one directly above the other — vertically.
According to experts working in the field of the theory of antenna-feeder devices and radio wave propagation, you can do without the matching elements if the opposite is to use the same winding of both coils. However, it will be another antenna with circular polarization.
V. BASHKATOV, Gorlovka, Donetsk region, Ukraine